CHICAGO, Ill., This was one of the most historic among the glittering chapters of the World’s Series. the fifty-sixth annual fall classic. The Chicago White Sox were in the big show for the first time since. 1919. Their opponents, the Los Angeles Dodgers, made a fitting contribution, too, in the unusual setup. Never before had a team from a city west of St. Louis played in the post-season spectacle.

The promise of this match to produce the unusual was fulfilled in the first game. October 1. The White Sox. who often had been compared to Charles A. (The Old Roman) Comiskey’s Hitless Wonders of 1906, whomped the National League champions. 11 to 0, the highest-scoring, opening-game shutout in World’s Series annals. There had been times during the season when the White Sox, in their arduous pursuit of the championship, scored scarcely that many times in a full week of play.

The White Sox had clinched the flag in their 151st game, with only three remaining. They had won 35 of 50 which were decided by the slim margin of one run.

It had been even rockier for the transplanted Dodgers. who until two years ago called Brooklyn their home. They had rallied to tie Milwaukee after 154 games, then had beaten the Braves in two successive playoff encounters by a single run. They had won 35 of 55 contests by the minimum margin.

Neither had withering fire power. Actually, they were almost twins, featuring strong pitching, great defense, and speed. That’s what made the result of the opener a surprise to the 48,013 who had come prepared to suffer with the White Sox as they progressed the hard way. The fans were amazed at the parade of runs which reached a peak when seven crossed the plate in the third inning.

The American League kingpins had made two in the opening round off Roger Craig. They made two more in the fourth to complete the game’s scoring on a chilly, gusty afternoon in Chicago.

It was a satisfying day for Señor Al Lopez, the mild-mannered man who manages the White Sox. He must have remembered his worst week in baseball—the 1954 Series against the New York Giants, who beat his Cleveland Indians in four straight.

One of the Cleveland pitchers who went down in that debacle was Early (Gus) Wynn. But this, too, was a day of triumph for the rugged 39-year old competitor, though he shared his first World’s Series victory and shutout with Gerry Staley, another 39-year-old, who pitched the last two innings.

It was a day never to be forgotten, too by 35-year-old Ted Kluszewski, who knocked in five runs with a first inning single and two-run homers in the third and fourth. His first boundary wallop kayoed Craig. His second sent Chuck Churn on the same melancholy trip.

Kluszewski, claimed on waivers from Pittsburgh when little more than a month was left in the season, tied a World’s Series runs-batted-in record jointly established in 1936 Bill Dickey and Tony Lazzeri of the New York Yankees in an 1804 rout of the New York Giants. Klu was a fearsome figure, the bare arms of his 240-pound physique showing almost up to the shoulders. 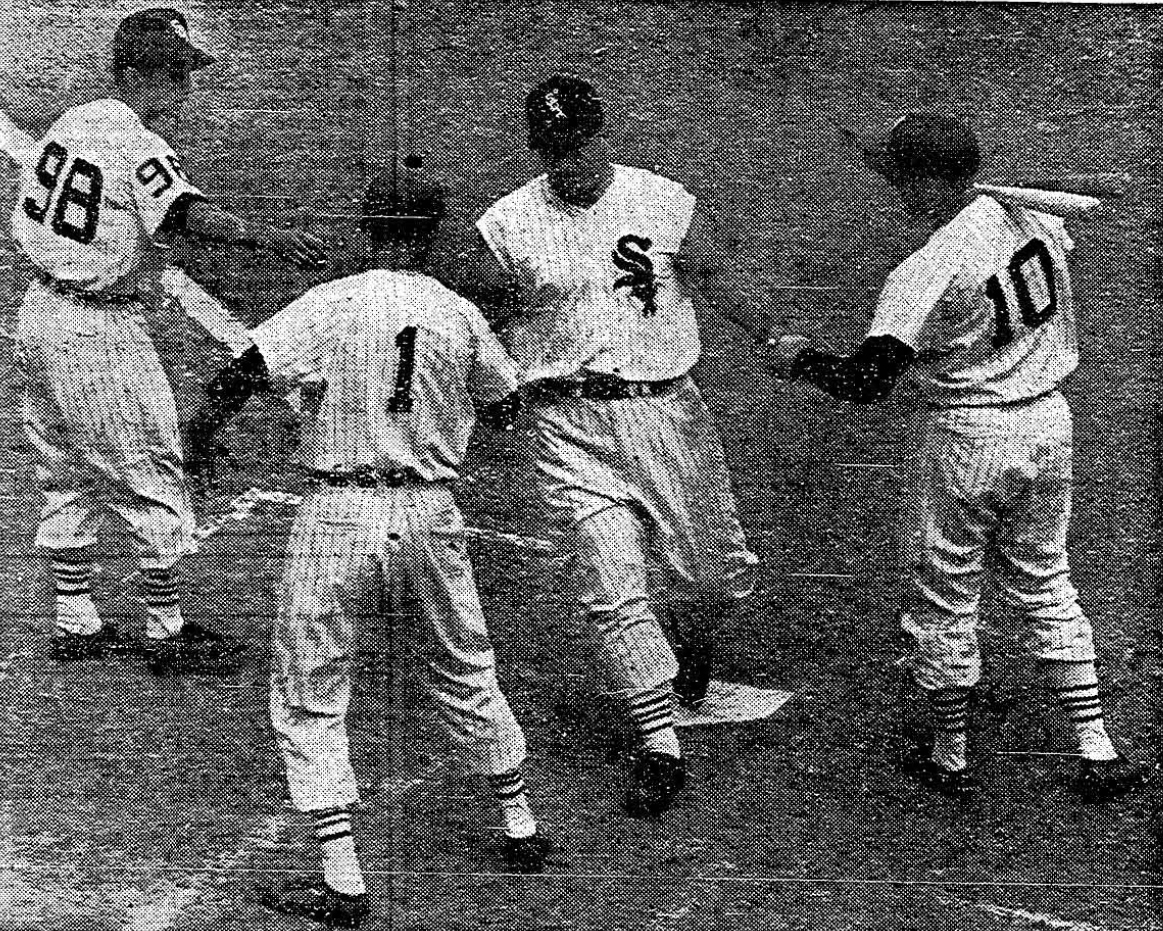 TED KLUSZEWSKI, who had no trouble hitting Dodger pitching while playing in the National League, was.the batting hero of the White Sox in the Series opener, smashing two homers and a single, driving in five runs. Big Klu connected for his initial round-tripper in the third inning, with Jim Landis (No. 1) aboard. Waiting to welcome him at the plate are Landis, Sherman Lollar (right) and the Pale Hose batboy.

Wynn won because his control was sharp. Old Gus walked only one. Three runners reached second against him and he fanned six. His surrender in the eighth was not forced by Los Angeles bats, but by a stiffening of his right elbow in the semi-frigid atmosphere.

In contrast, it was a sorry start for the Dodgers—never an impressive World’s Series team last attested by their record of losing eight of nine previous classics. They made three errors, all in the seven-run third, to tie a World’s Series record.

Duke Snider was charged with two of the misplays, but they were border-line decisions in which he was more the victim of the scoring rules than mistakes. He dropped a fly ball after colliding with Wally Moon and was given another bad mark when his relay to the infield went astray, partly because the Dodgers were out of position.

The third error was committed by Charlie Neal, an errant throw in front of the plate which contributed to four unearned runs among the seven. The Dodgers used five pitchers, and after Churn was eliminated, his three successors combined to hold the surprising White Sox to one hit. They were Clem Labine, Sandy Koufax and Johnny Klippstein.

Wynn had no easy sailing in his glory day. Neal singled off Billy Goodman’s glove with one out in the first inning and stole second for the game’s only theft. After Moon popped to Luis Aparicio, Snider drew a pass, the only one issued bye the old-timer. The threat was dissipated when Jungle Jim Rivera took Norm Larker’s liner.

Aparicio, hitless for the game, popped up to Maury Wills in Chicago’s opening inning, but Nellie Fox walked after a 3-2 count. The count was 3-and-2 when Landis singled, and Fox, off with the pitch, raced ton third. Kluszewski, after spurning Craig’s first pitch, bounced a single past Neal, bringing Fox home with the first run of the Series and moving Landis to third, 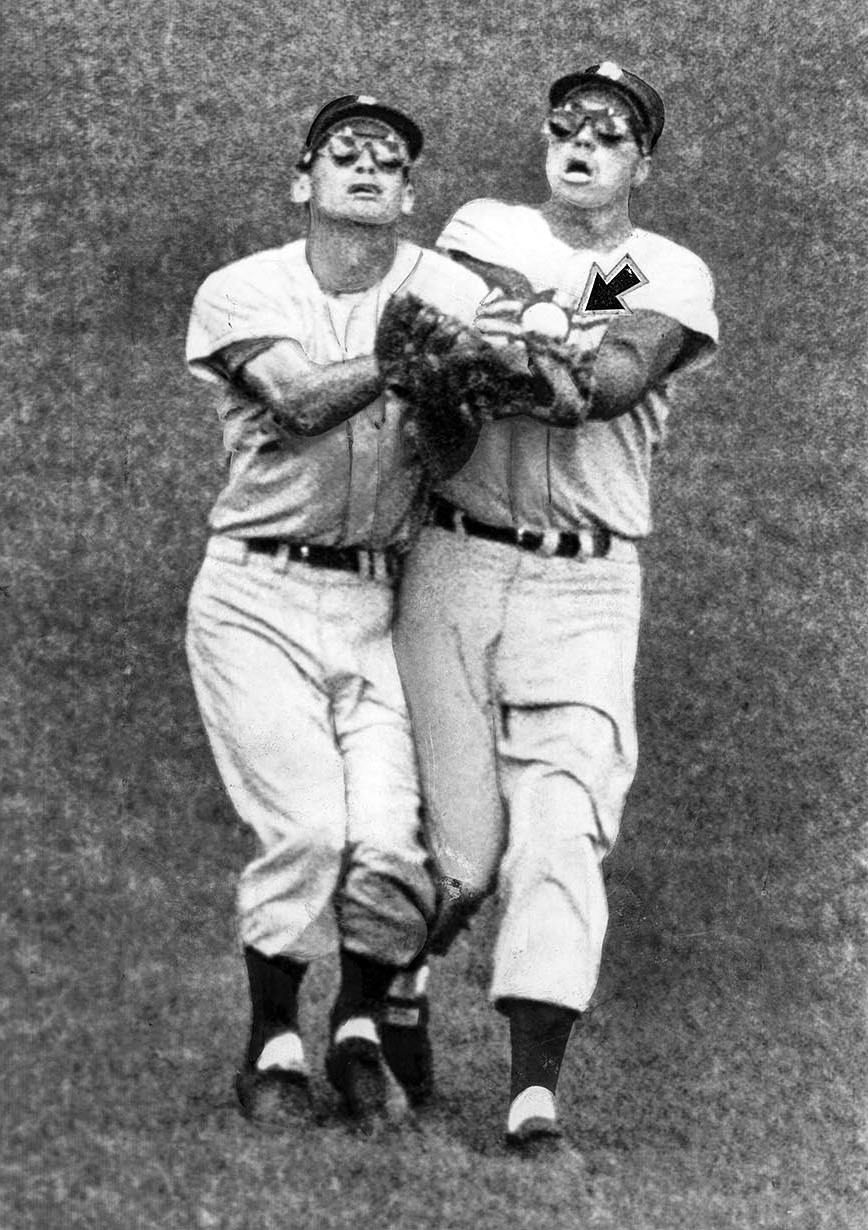 Dollar Drives in Landis
Landis scored after Sherm Lollar sent a long sacrifice drive to Larker in almost dead center. The Los Angeles outfield had over shifted ton the left on the veteran catcher. Goodman’s fly to Snider completed an inning which had lasted half an hour.

One of the few well-hit balls off Wynn was a shot by Gil Hodges at the start of the second inning which sent Al Smith back near the wall. Craig matched his opponent’s effectiveness in Chicago’s first half of the inning.

Wynn mowed the Dodgers in the third—Craig whiffed, Fox stepped back for Jim Gilliam’s fly, and Aparicio threw out Neal after the second baseman had dried one into the left field seats, barely foul.

And then came the third-inning holocaust! Aparicio lined out on a first pitch. What happened afterward brought the thought that all the frustration of four decades suddenly was richly rewarded.

Fox started the incredible inning with a double to right. Landis, on a first pitch, singled to right-center and Fox scored. Craig drove Landis back to first with two pickoff throws.

When Craig finally threw to the plate, Kluszewski was ready, sending a tall fly which, with help of a cross wind, dropped into the right field seats as Larker made a fruitless leap. This finished Craig, whose great pitching in the stretch run had been vital to the Dodgers.

The first episode in Churn’s turbulent turn came on Lollar’s fly ball into left-center. Snider and Moon both called for the ball and, as Duke made the grab, there was a collision. The ball fell for a two-base error against Snider.

Goodman’s line single to right brought in Lollar with the fourth run of the inning. The spectators yelled, whistled and stomped some more when Smith belted a double over Moon’s head, the ball caroming off the wall.

Goodman was haIted at third by Coach Tony Cuccinello, but when there was no cutoff man and the throw from Snider finally was half-fielded by Hodges, Goodman scored and Smith took third. Hodges slipped. and sprawled as he went after the ball and Snider drew the penalty.

Wynn Caps Big Frame
The Dodgers’ infield came in for a play at the plate with Rivera at bat. Jim bounced to Neal, whose hurried throw was low, the ball bouncing past John Roseboro. Smith scored and Rivera reached second. Wynn capped the onslaught with a double to left-center which sent Rivera across.

The second hit off Wynn also was of the infield variety, a slow bounder by Moon at the start of the foUrth which Fox charged but couldn’t handle in time. After Landis went deep for Larker’s smash, Hodges singled to center, but Wynn fanned Roseboro.

Landis started the Chicago fourth with a single to left. Kluszewski, with a 2-and-2 count, connected. for his second homer,the ball bouncing off the facade between the upper and top stories in right-ceeter. In 101 times up for the White Sox, Ted had hit only two homers, these also having come in one game.

Kluszewski’s shot brought Labine to the mound. and he restored. order. Lollar flied to Snider, Sammy Esposito took a third strike and Smith lofted to Larker.

Wynn stepped up his strikeout pace in the fifth. After Wills grounded out, Chuck Essegian, Labine’s pinch-batter, fanned. Gilliam took a third strike. Koufax was equally effective in Chicago’s half. Rivera hoisted to Larker. Wynn was called out on strikes and Moon ranged in for Aparicio’s fIy.

Neal opened the Los Angeles sixth with a single between Esposito and Aparicio. He advanced on Moon’s grounder to Kluszewski, but proceeded no farther when Esposito took Snider’s foul and Larker fanned on a high pitch. Chicago’s sixth was equally uneventful.
Moon dashed forward for Fox’ fly, Wills pegged out Landis and Kluszewski bounced to Neal.

Wynn was rough. as usual, in the seventh. He tossed out Hodges and Roseboro lifted a foul to KluSzewski. Wills singled to left, but Ron Fairly, swinging for Koufax, grounded to Kluszewski, who tossed to Wynn at first.

Klippstein was fifth in the Dodgers’ pitching parade in the seventh, Lollar supplied the first out on a grounder to Gilliam. Klippstein took Esposito’s shot and tossed him out. Smith’s second double was a sliced fly to right field. the only hit made by the winners after the fourth. Al still was on second when Rivera whiffed.

Staley Relieves in ·Eighth
Gilliam singled between short and third at the start of the eighth. Aiter
Wynn had missed the plate on two pitches to Neal, Lopez called on Staley. He evened the call to 2-and-2 before Neal slapped the ball to Aparicio, who launched a double play. Staley stretched for Moon’s grounder and threw him out.

Klippstein moved through the White Sox easily in the eighth, Staley fanned and Neal tossed out Aparicio and Fox.

Then the National leaguers came up to their last chance—if you can stretch a point. Staley struck out Don Demeter, but Larker singled to left-center. Hodges singled off Esposito’s glove and the shutout was in jeopardy.

But Kluszewski. proving he also is a glove man, went to his right, speared
Roseboro’s grounder and threw out Hodges at second. Larker took third on the play—first Dodger to reach the outpost— but he, too. headed to the clubhouse after Smith loped into left-center for Pinch-Batter Carl Furillo’s easy fly. 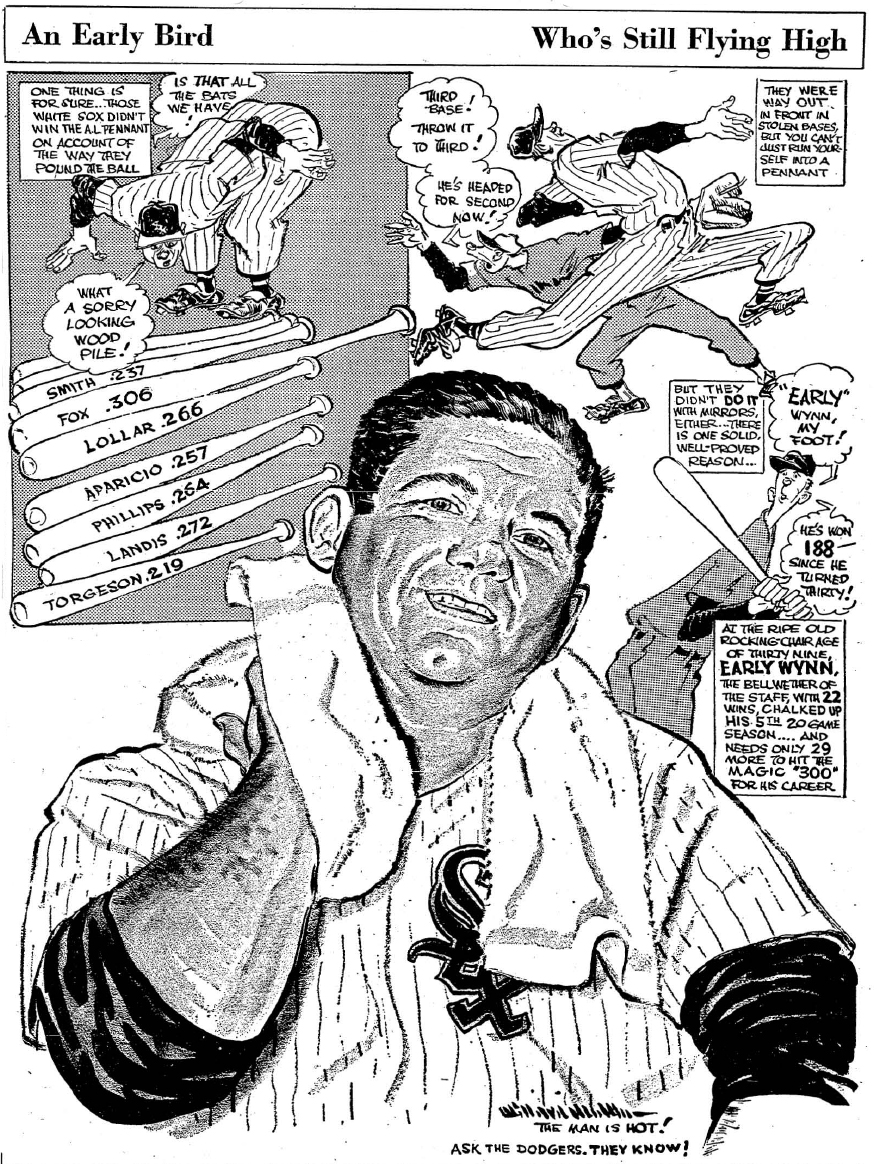 No Bunting—Veeck Wanted Park as It Looked All Year

CHICAGO, Ill.—One of the first big surprises at the World’s Series opener was the absence of traditional bunting from the inside of Comiskey Park. It was the first time in the history of the classic that there was no bunting to add to the color of the spectacle.

However, the exterior of the park was gaily decorated at a cost of $7,000. Included were hanging baskets of artificial roses.

President Bill Veeck’ of the White Sox explained the lack of inside decorations this way:

We are very proud of the appearance of our ball park, It not only is a beautiful park but it’s now the cleanest in the major leagues. We wanted the fans to see it as it is throughout the season.