Drake Hotel a Stimulus.
While there has been much doing in and around this district for some time, nothing hs approached the present activity that the proposed Drake hotel. at the southeast corner of North Michigan avenue and Lake Shore drive, is now certain of erection. 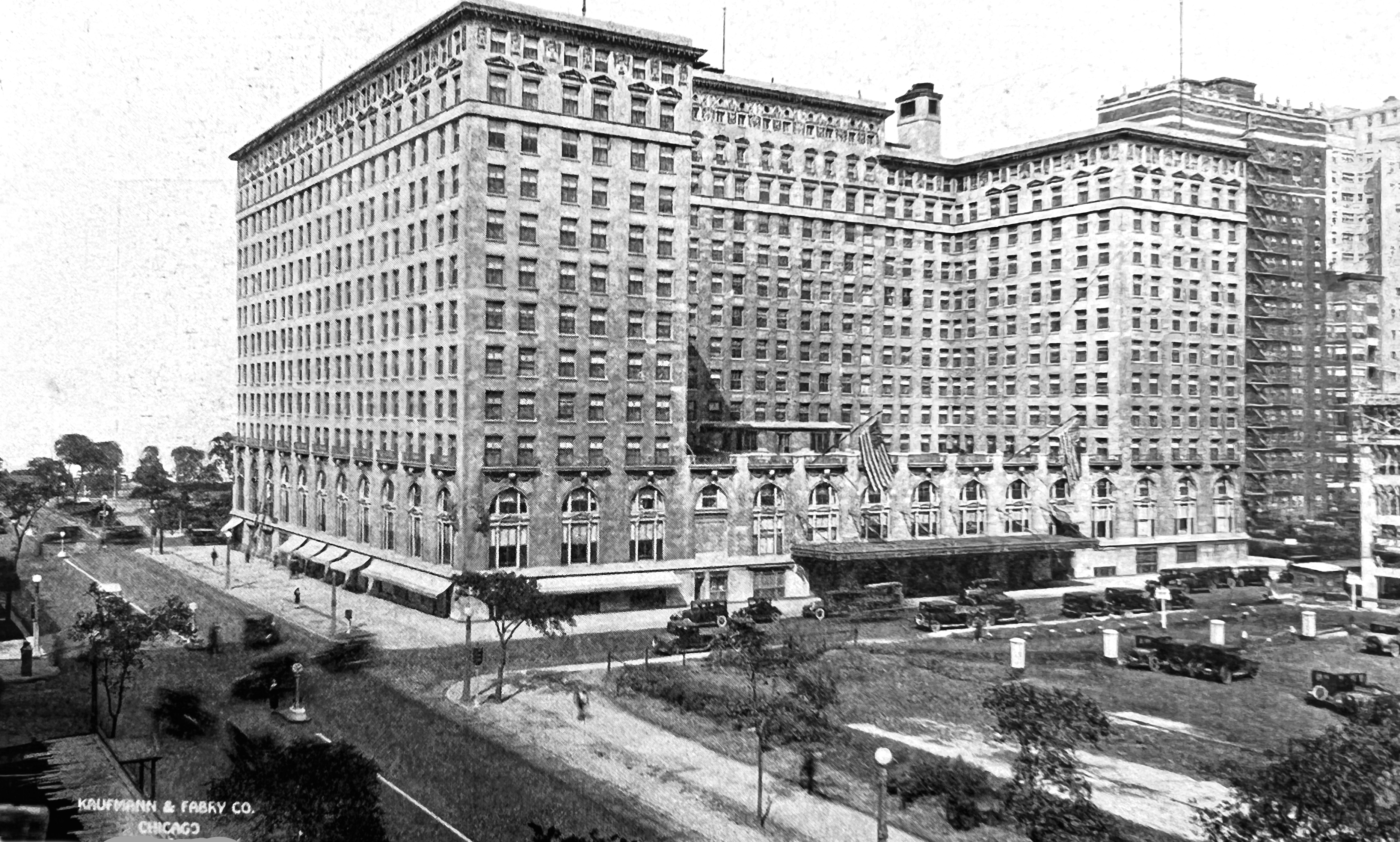 The Drake Hotel, under the management of Tracy and John B. Drake, at North Michigan Avenue, facing the lake on Oak Street. Opened in 1921. One of Chicago’s great hotels. 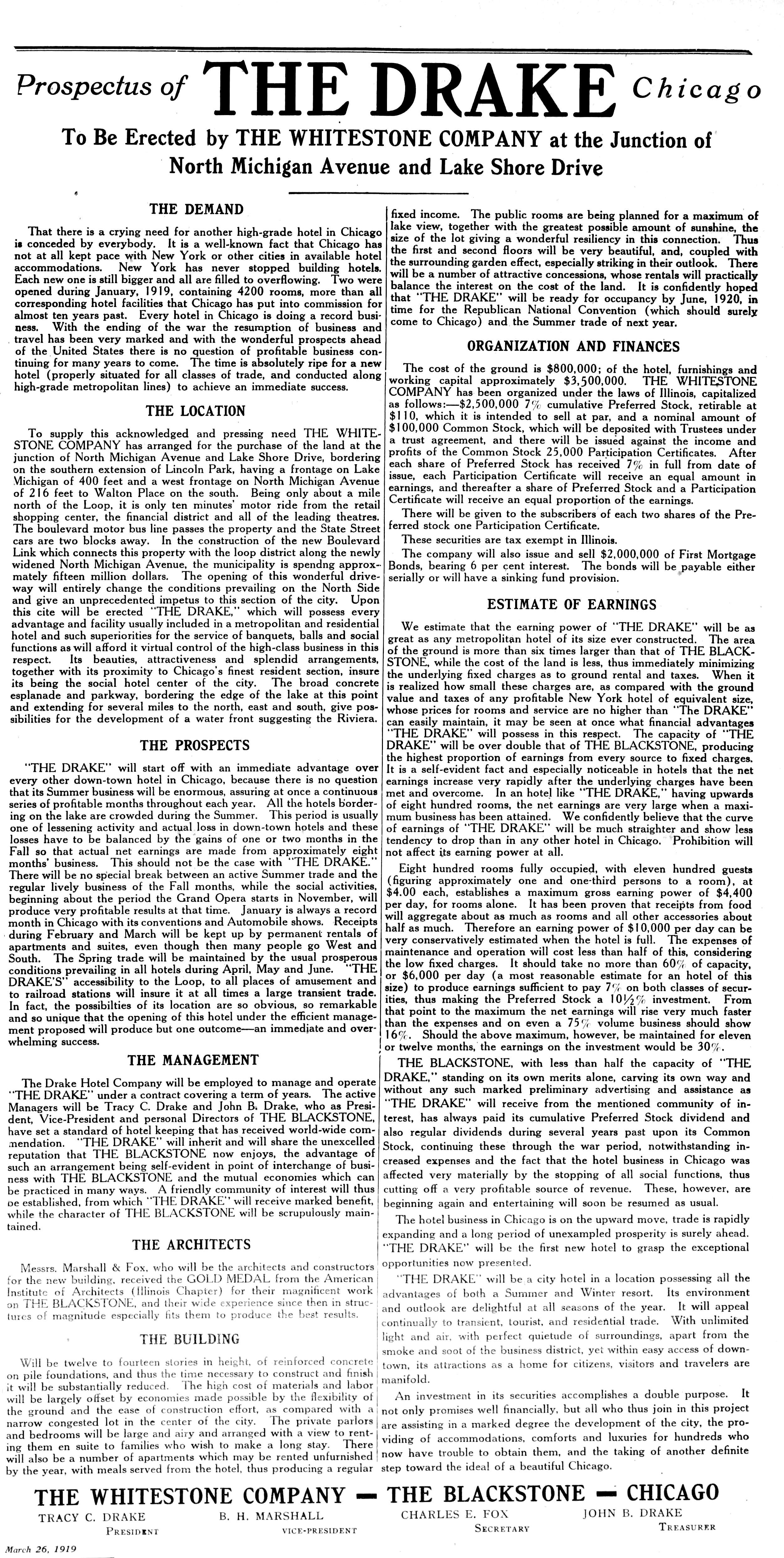 At the entire issue of $2,500,000 of the preferred stock of The Whitestone Company referred to in the foregoing prospectus, has been heavily over-subscribed for at par by friends of the management of The Blackstone, this advertisement is published as a matter of record only.

The Drake hotel at upper Michigan avenue and Lake Shore drive was opened to the public yesterday.

Tracy C. Drake, who with his brother, John B. Drake, manage the hotel, said:

Simplicity and comfort has ben our aim. The furnishings will be simple. The Drake will be essentially a transient hotel, although 25 per cent of our guests will have rooms by the year.

The ladies’ lounge, or “quiet room,” with the gentlemen’s grill, will occupy the entire 217 foot front of the second floor along Michigan avenue from Lake Shore drive to East Oak street.

The main dining room, which wil accommodate 880 guests, faces north along Lake Shore drive. Windows between the pillars were removable, as are the skylights, permitting an almost complete outdoor effect in summer.

There will be children’s play-room on the thirteenth floor. Rolling chairs by which guests may be conveyed directly from their rooms to the cement walk along the lake to Lincoln park have been arranged for by permission of the Lincoln park board.

All the rooms are not finished, but the lower floors are ready for guests. The cost of the hotel, including ground, was $8,000,000.

THE DRAKE.
The opening of the Drake is rather more of an event than can be measured by the addition it makes to the excellent and growing hotel facilities of the city. Chicago hotels are an important factor of its prosperity and, up to the saturation point, the more we have and the better they are the better for the city.

But the opening of the Drake is a social event, in the better sense, a landmark in the life life of the community. Its location fixes a new social focus around which will grow a small new city of theaters, clubs, and fashionable shops. It will be, in fact, the center of the new age of fashion and the belles and beaux of a generation will pass in review before its mirrors. Many of the social events which men and women look back upon will be held here—great balls and the endless procession of dance, teas, wedding receptions and coming-out parties which will thrill the heart of the debutante and are remembered fondly in older and graver days as of the pageant of glorious youth.

Celebrities of all high varieties will pass in and out its doors—statesman and famous soldiers, captains of finance and industry, poets who flutter the dovecotes of culture, novelists and preachers at whose feet sit the breathless aspiring, ladies of fashion and actresses adored, princes viewing mankind and diplomats grave or debonair. In a word, the Drake should be a mirror of the time as great hostelries have been in every age and clime; as the Grand Pacific, to speak only of our own brief past, mirrored the Chicago of the ’70s and ’80s and the Auditorium the ’90s.

The loop will remain the core, the towering central range of our business structure. But the great avenue will be the parade where such ceremonial life as our democracy indulges in will chiefly center, where the peacock, Fashion, preens in the sun of his own esteem, where pleasure is pursued and sometimes caught, where what glitter and gay gesture our hard working society of the midcontinent may indulge in may be shared in or seen.

Today the new Tribune plant and the Wrigley building at one end of the northward wing of the boulevard and the Drake at then other are, as it were, on a frontier. It is pleasant to build an imagination of the theaters and hotels, the bright shops and cafés which before many years will fill the intervening mile and to picture the throngs, drawn from all parts of the world, which in the years to come will seek along this great avenue their worldly desires. 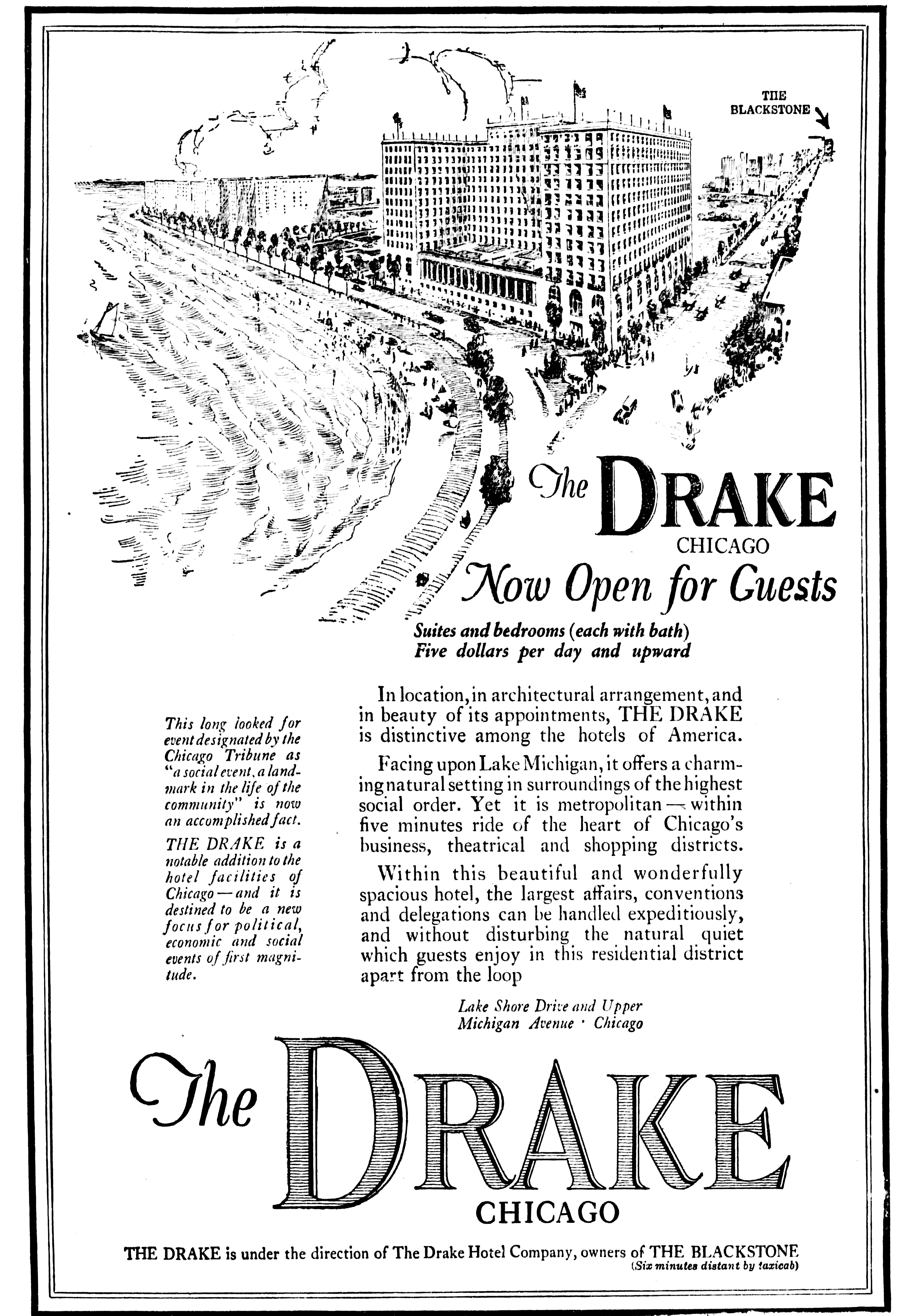 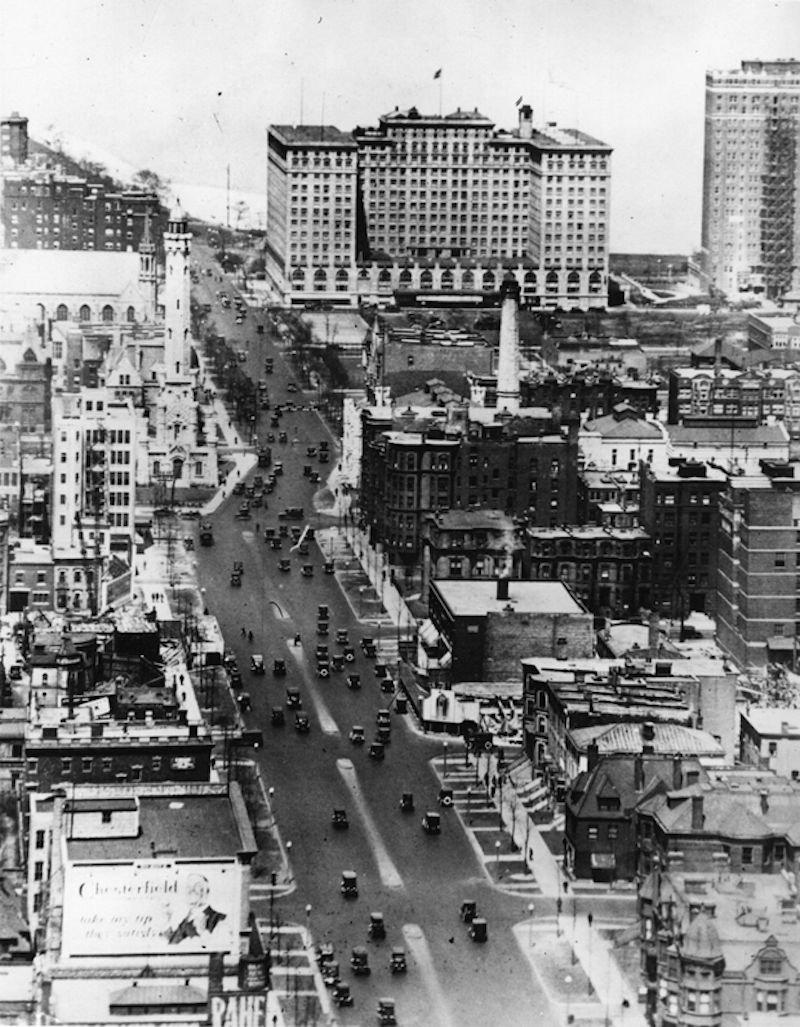 It will be of interest to the general reader to learn that the Drake Hotel in Chicago, is being equipped with a powerful radioteletronic broadcasting station. Th work, already under way, is being done by the Midwest Radio Crentral, Inc., a Chicago organization, to which the new station will belong. If our information is correct, it will be the first large broadcaster operated in conjunction with a hotel.

The entire station will be so arranged that both studio and transmitter room will be accessible to hotel guests, and the station will be fitted as a “show affair.” The studio will be one of the most attractive in the country. Mr. W. J. Sinclair, who decorated both the Drake and the Blackstone, is taking care of this detail. The room used is on the eleventh floor, originally intended for a handball court. The transmitter will be in a small adjoining room, which faces south.

A little might be said concerning the apparatus. The antenna equipment, supplied by John A. Roebling Sons, consists of a four-strand flat-topped “T”, slung between masts on the southeast and southwest corners of the building. The counterpoise is of the fan type, horizontal, and fifty feet below the antenna. Five thousand feet of wire will be used. The Midwest Radio Central says that the location is the finest in Chicago. The set itself contains the most recent developments. A pair of 250-watt amplifiers are controlled by a master oscillator of 2 50-watt tubes. Modulation is accomplished by another pair of 250-watt tubes, which are in turn controlled by a 50-watt and a 5-watt tube. A 2-kw generator supplies the set, and more tubes may be quickly added if more power is wanted.

Station WDAP (this will be its call) intends to supply the very best talent for its programs. Fulcher and Bohan will take care of the musical direction, Microphones will be placed so that the various hotel orchestras may be enjoyed by the guests and the radio listeners at the same time. Speeches of especial interest will also be broadcasted. A private wire from the observatory of the Elgin Watch Company will supply the exact time, which will be broadcasted daily at intervals on the “buzzer.” Stock quotations, news items, baseball scores and the like will be included innthe daily program.

It is very difficult to estimate the range of such a station. WDAP should have a minimum range of 400 miles. A night the signals should go from 800 to 1000 miles, with a possible maximum on winter nights of 2000. 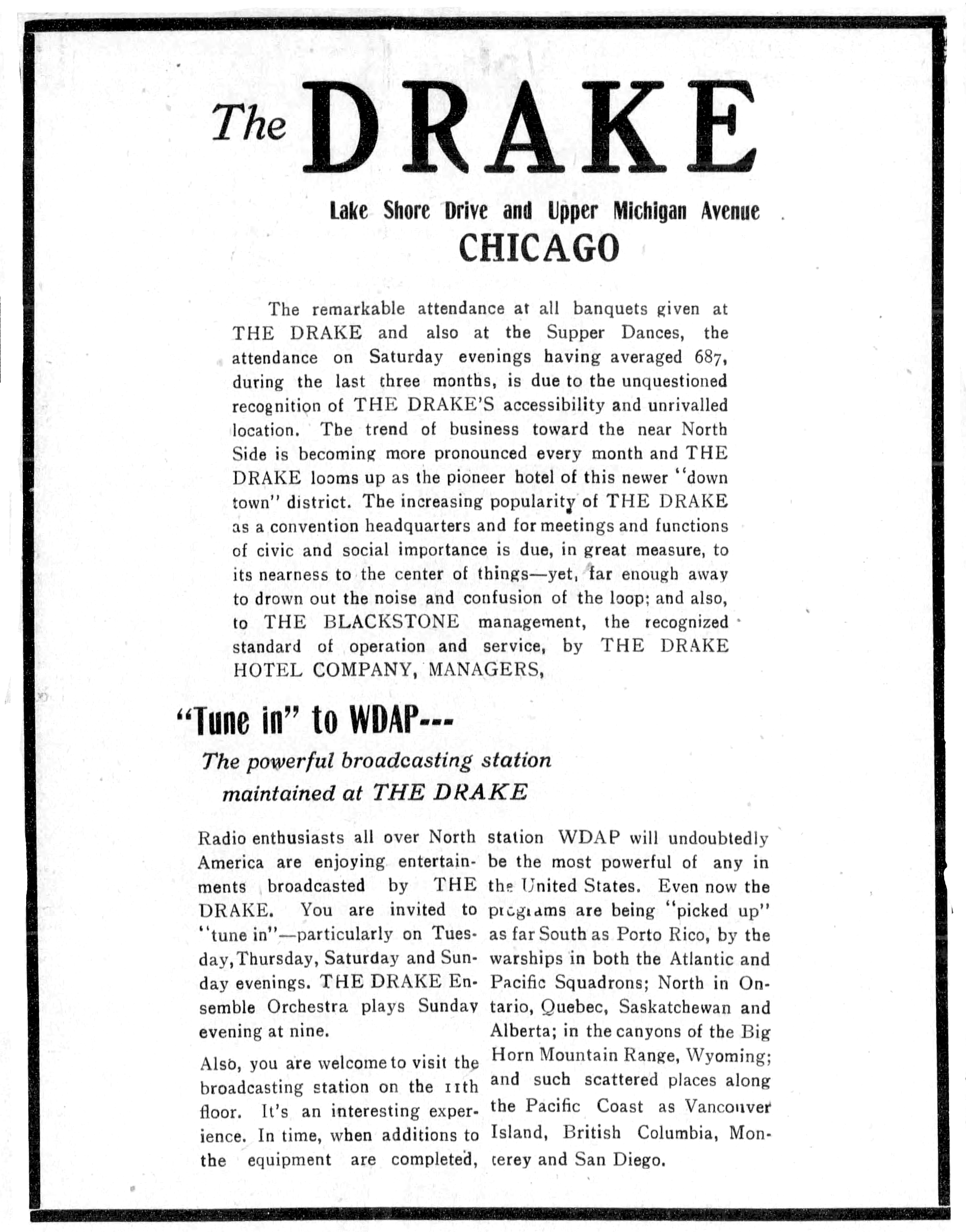 Radiophans in all parts of the globe know about Station WDAP, located on the Drake Hotel, Chicago. The programs daily broadcast from WDAP, featuring The Drake Ensemble Orchestra and Jack Chapman’s Famous Dance Orchestra, are among the most popular of all picked up.

Mow comes the announcement, that effective June 1, the call of The Drake’s station will be WGN, formerly WDAP. This means a union of the forces, talent and prestige of two of Chicago’s foremost institutions, The Drake Hotel and The Chicago Tribune, for a greater and better contribution to the radio fraternity of America.

The Chicago Tribune, which has been broadcasting from another Chicago station, will hereafter “be on the air” from The Drake Hotel. For a period of six months, at least, the old familiar letters WDAP will be linked with WGN by the announcer. The wave length is now 370 meters instead of 360 meters.

Station WGN WDAP is one of the few large broadcasting stations having a wide open door policy for visitors. The Drake Hotel is anticipating a heavy guest list from the south, especially during July and August. Many of them, no doubt, will be radiophans who will enjoy the experience of seeing just how it’s done.

The distance record of WDAP up to June 1, is 8,400 miles. A globe in the studio, showing the changes in scope of receptivity from week to week, is one of the fascinating features for visitors. 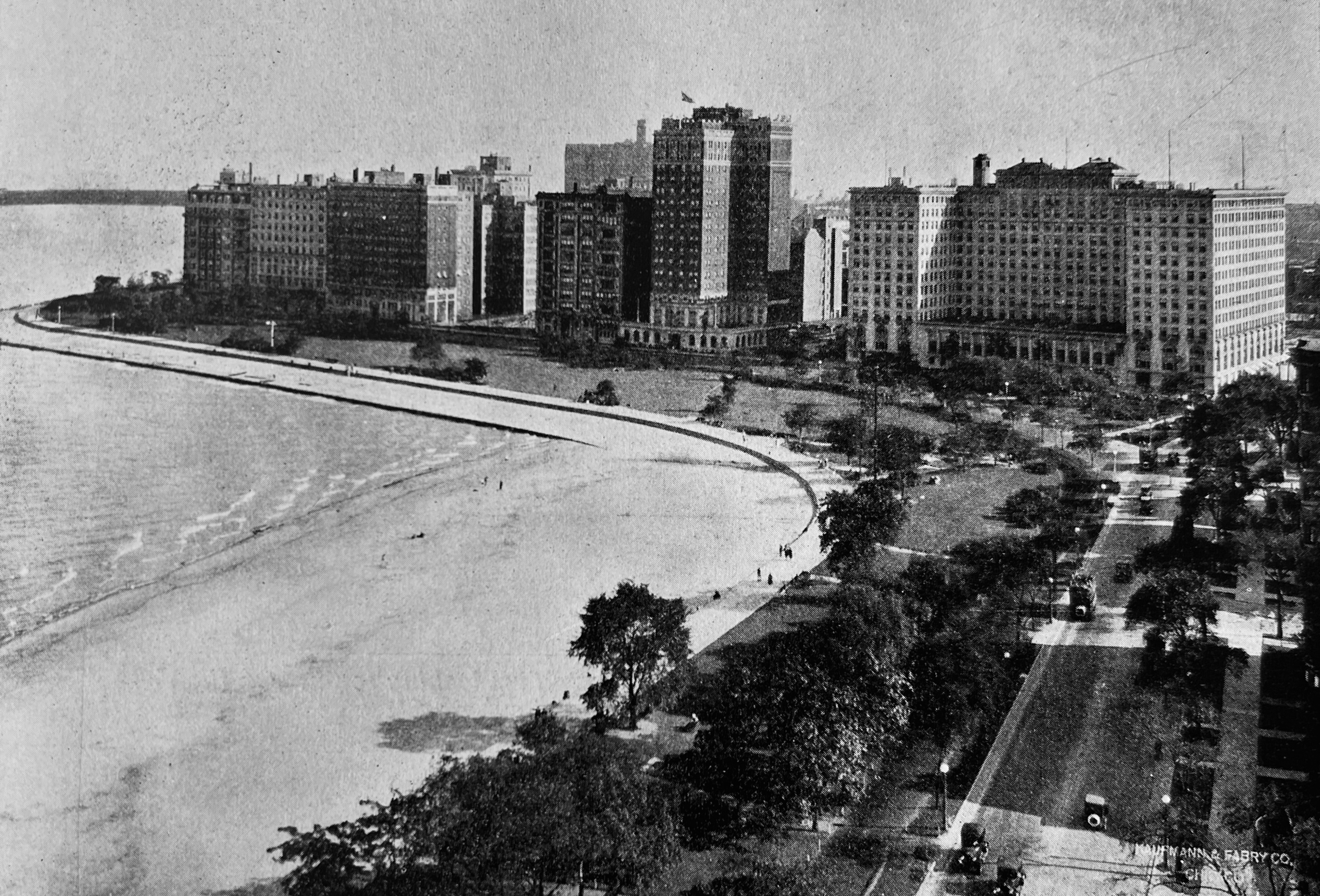 A view of Oak Street Beach taken in 1925, showing the north fronts of the Drake Hotel, the Lake Shore Drive Hotel and several of the co-operative apartments, the beginning of Chicago’s Gold Coast. 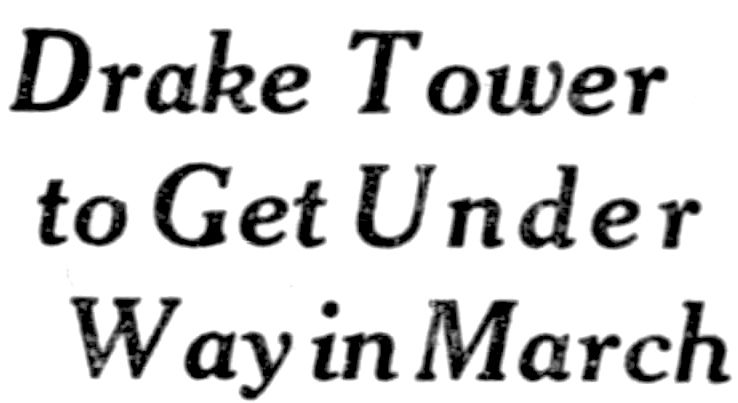 Work will start next month on Drake Tower, the thirty story apartment building to be erected, as announced in The Tribune Dec. 3, 1925, on the vacant ground between the Drake and Lake Shore Drive hotels. Benjamin H. Marshall’s plans call for a structure 340 feet tall, which means it’ll be nearer the sky than anything along the Gold Coast. It will have approximately 100 unfurnished apartments.

It is being erected by the Drake Tower Building corporation, headed by Mr. Marshall. Lewis B. Walton is vice president, E. L. Brahears secretary, and W. B. Ewer is treasurer. A contract has been made with the Drake hotel to operate it. Its elevator lobby will be connected with the Drake hotel lobby. Tenants may have Drake hotel service, if desired, though all suites will have either regulation kitchens or kitchenettes.

The apartments will have from three to seven rooms. Sleeping rooms will face south and living rooms will have a northern exposure looking over the lake and Lake Shore drive. Completion of Drake Tower is set for the summer of next year. It is being financed by the Union Trust company. 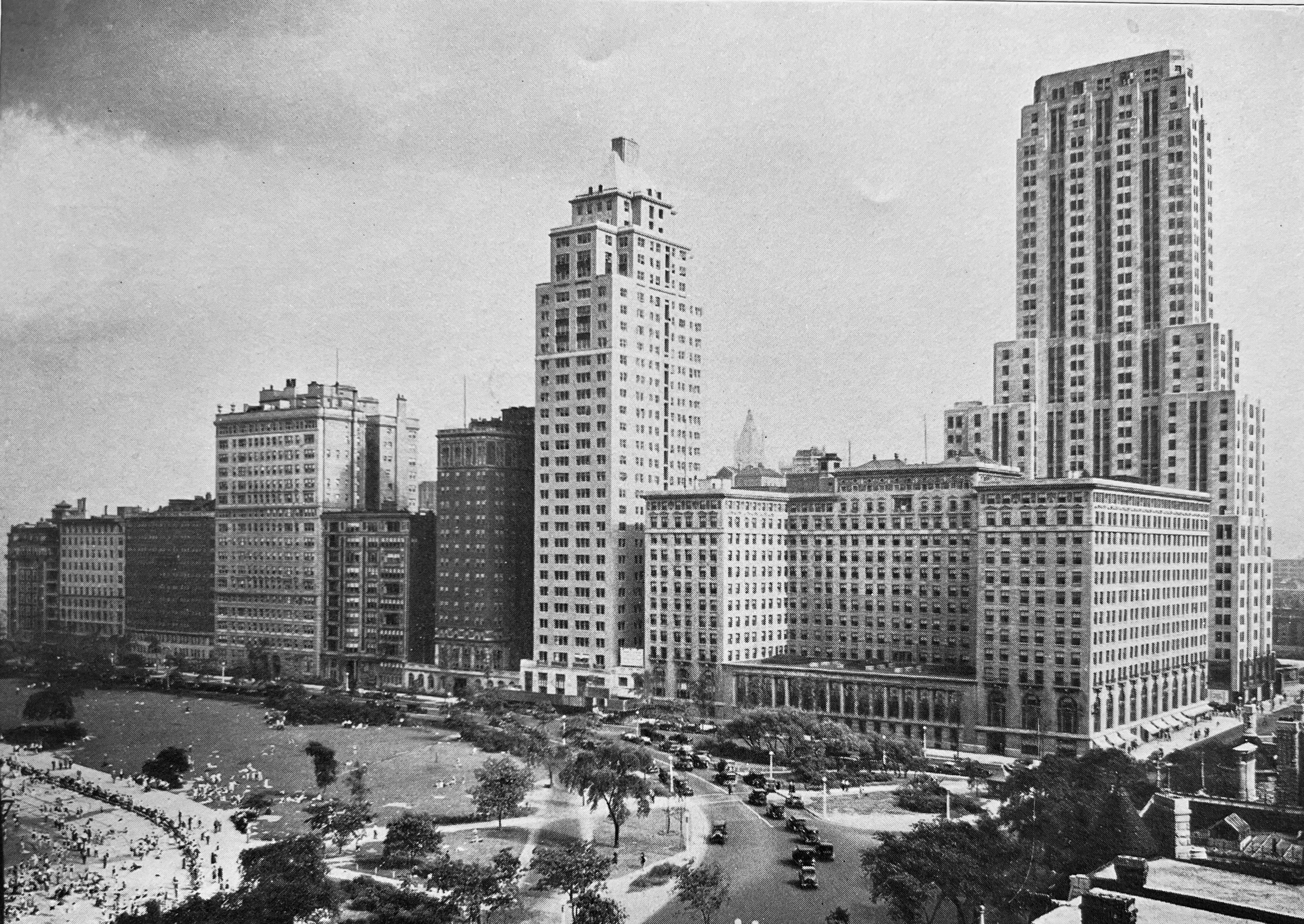 A view of Oak Street Beach taken in 1929, showing the north fronts of the Drake Hotel, the Drake towers, the Lake Shore Drive Hotel and several of the co-operative apartments. The Palmolive Building is at the extreme right.