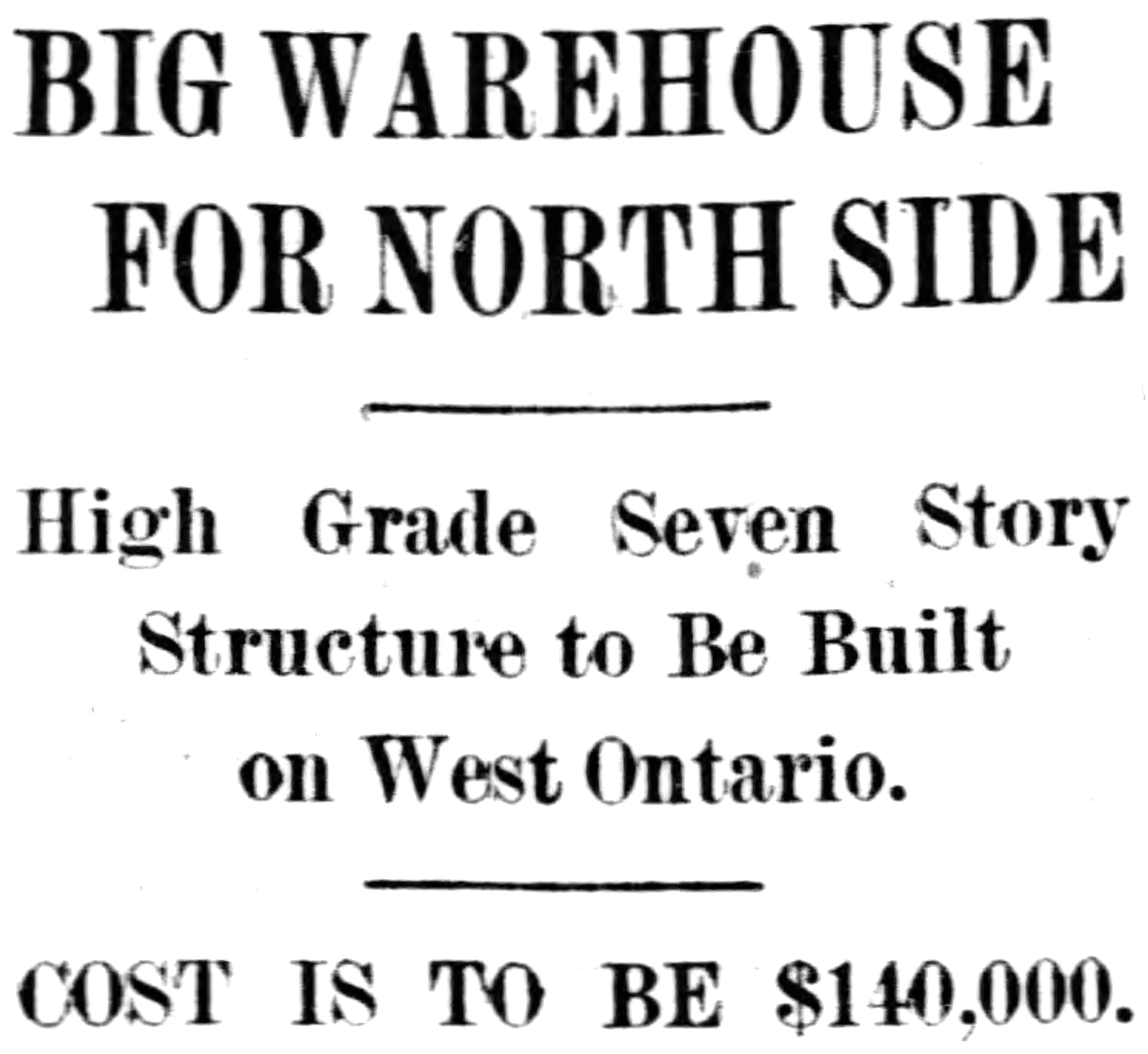 An important transaction has been closed in the Kingsbury street district on the north side involving the erection of a high grade seven story warehouse building to cost about the $140,000, which has been leased to the Birmingham & Seaman company, wholesale paper dealers, for a term of twenty years for a total gross rent of approximately $400,000.

The property involved comprises 411-423 West Ontario street, north front, 160 feet, with a depth of 100 feet, between Kingsbury and Orleans streets, having switch track connections with the Chicago, Milwaukee and St. Paul road. The property has been leased to the Birmingham & Seaman company by a syndicate headed by Winston & Co., the rent being based on a 5 per cent on a valuation of $6 a square foot for the land and 8 per cent on the cost of the building, which, as stated before, is expected to cost about $140,000, plus taxes and insurance.

Will Be of Concrete.
The building will cover 150×100 feet of ground, will be of reinforced concrete construction, with sprinkler, after plans by Architect Paul Gerhardt. The transaction was negotiated by Hampden Winston of Windston & Co. and Paul C. Loeber & Co. Frederick C. Hack attended to the legal details for the lessors and Samuel Adams for the lessees.

The Birmingham & Seaman company is one of the largest paper dealers in the country and is said to have selected the Ontario street location on account of its rail facilities and its proximity to the downtown district as being particularly well adapted to the handling, warehousing, and delivery of its goods.

This transaction is regarded as a marked recognition of the advantages offered by the near north side territory for industrial locations, as the company is said to have been investigating sites in various parts of the city during the last two years. 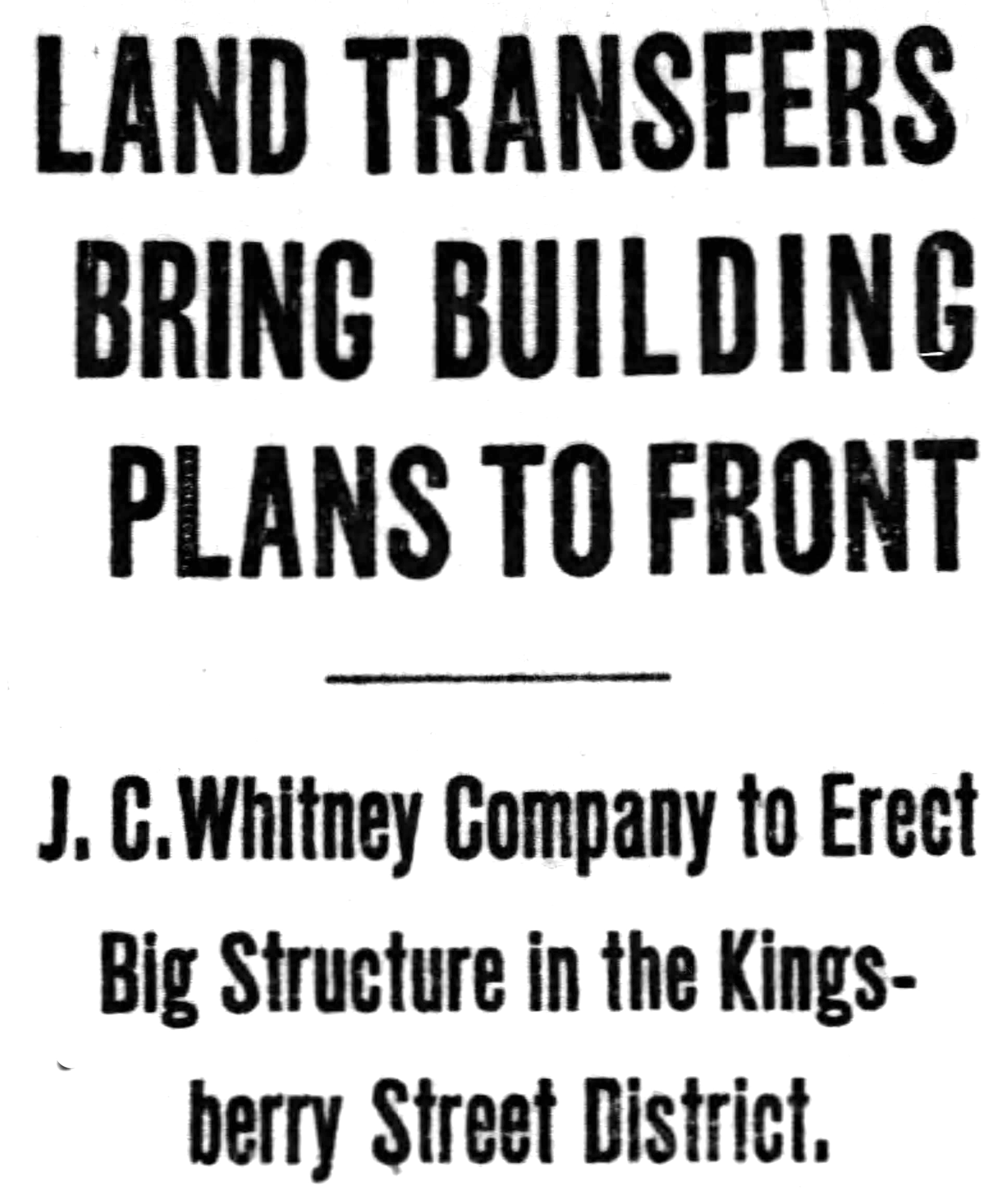 The present building activity was reflected in the large number of important building projects announced during the week, many being in connection with land transfers. This goes to confirm the statement frequently made in this column that the bulk of the land purchases are made for purposes of improvement.

Winston & Co. reported an important building project in the Kingsbury street district in connection with a lease of building space. It has an added interest because it involves the removal of a large downtown concern, the J. C. Whitney company, tea importers, to the north side. They are now located at Wabash avenue and Lake street. Winston & Co. in behalf of the syndicate will erect a seven story mill constructed building on 100×175 feet at the southeast corner of Kingsbury and Ontario streets, adjoining the Milwaukee and St. Paul tracks. It has been leaesed to the Whitney company for twenty years on a 5 and 8 per cent basis on a total valuation of $240,000, making the total annual rent approximately $14,000. S. N. Crowen is the architect.

Second Deal of the Kind.
This transaction is similar to the one entered some time ago by which the same parties agreed to erect for the Birmingham & Seaman company a seven story building on Ontario street, 120 feet east of the Whitney structure. Between the two there is a vacant plot, 120x 100 feet, on which the same syndicate will erect a hevy reinforced concrete building seven stories high, to cost about $100,000. 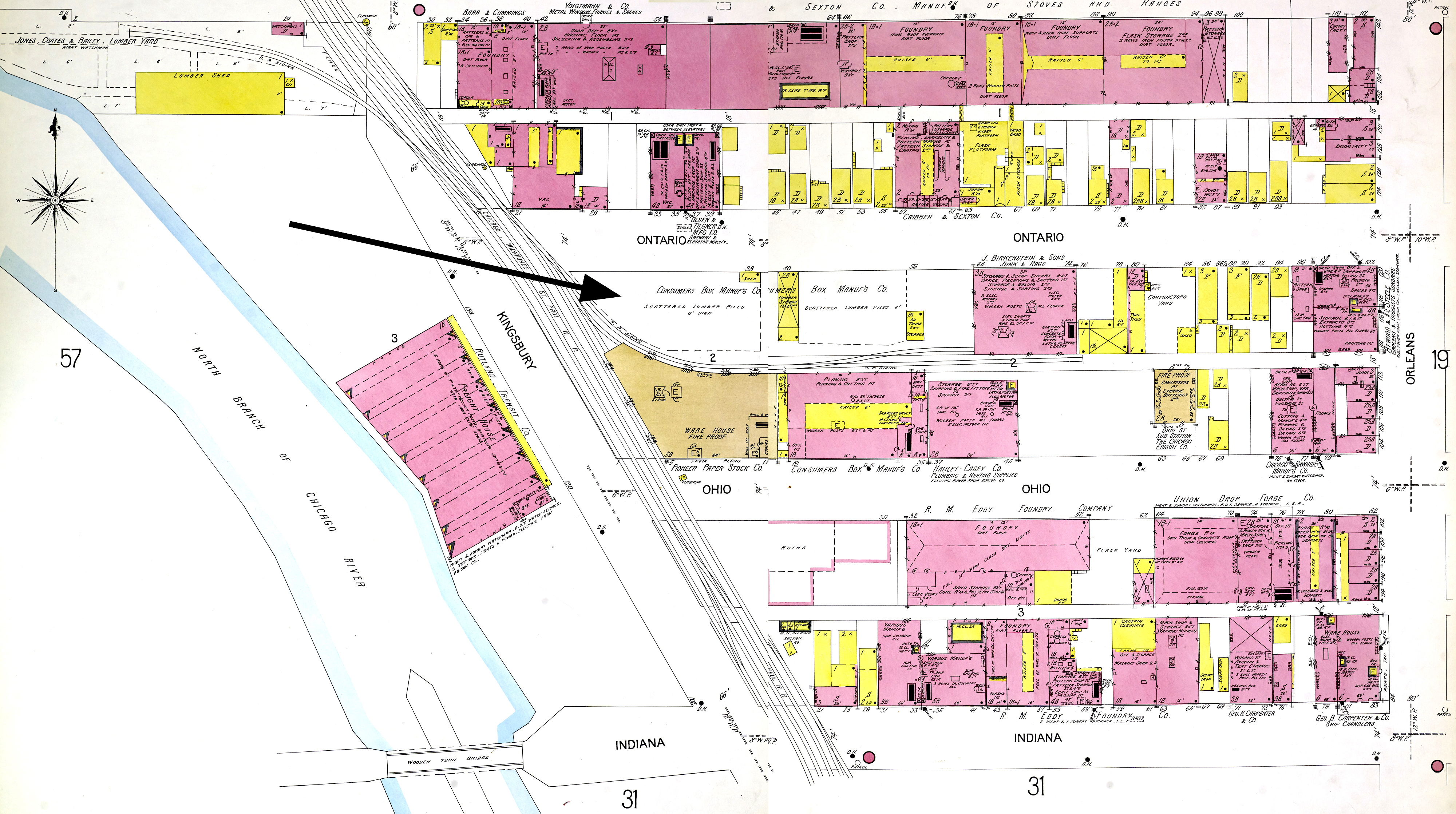