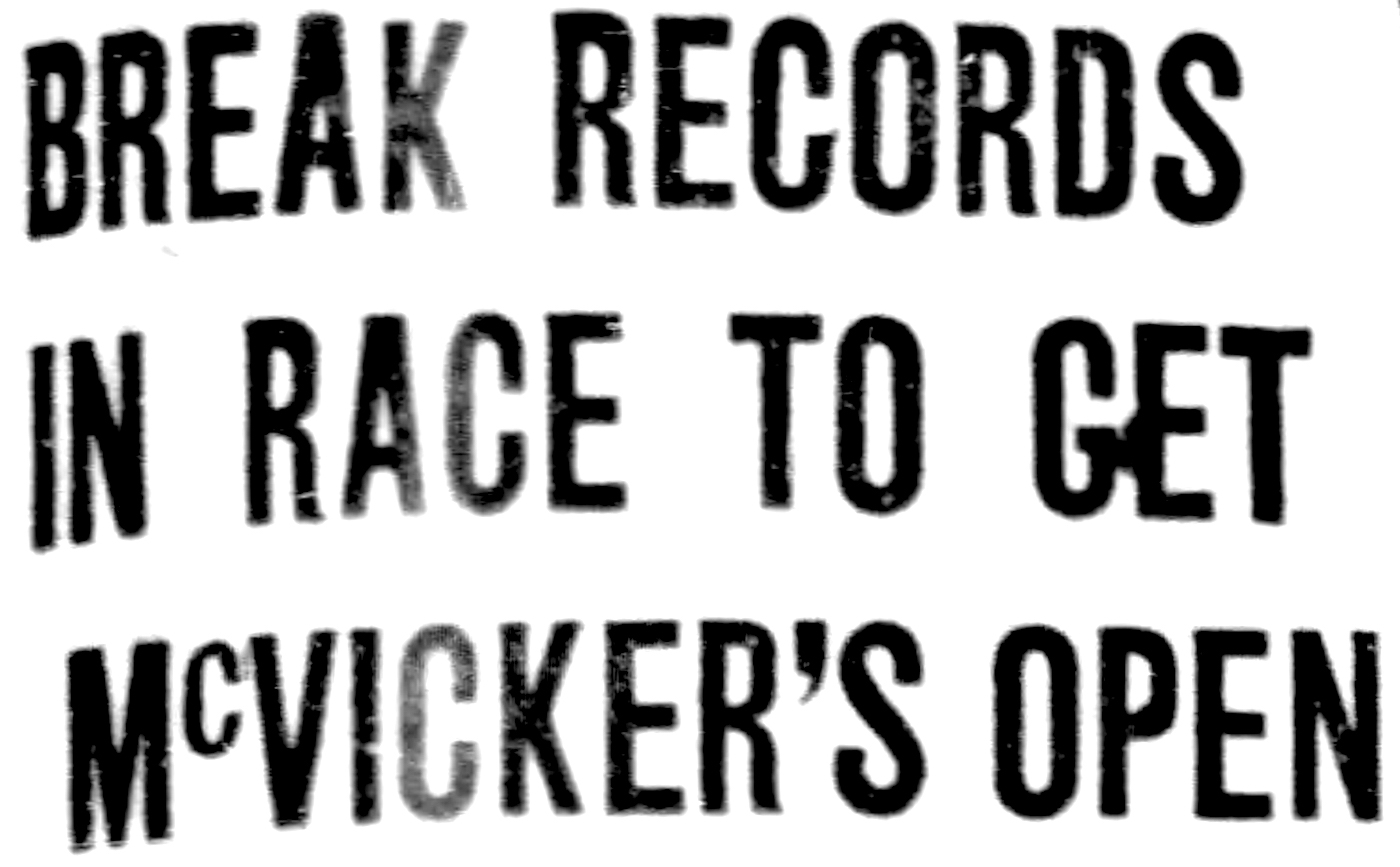 BY AL CHASE.
Chicago’s oldest playhouse, McVickers theater, will reopen its doors tomorrow night, almost completely rebuilt, after a record breaking race by contractors and workmen. The final curtain on the old playhouse was run down on April 30. Wreckers began operations the next day and Jones, Linick & Schafer have seen to it that things have been kept going at high speed ever since.

Thomas W. Lamb of New York City, daughter of the Capitol theater in that city, with Henry L. Newhouse and F. M. Burnham of Chicago, associated, are the architects of the new McVickers. They’ve evolved a building, whose classic beauty, dignity, and massiveness will make it the most attractive of the several McVickers theaters and one of the most imposing in the country. 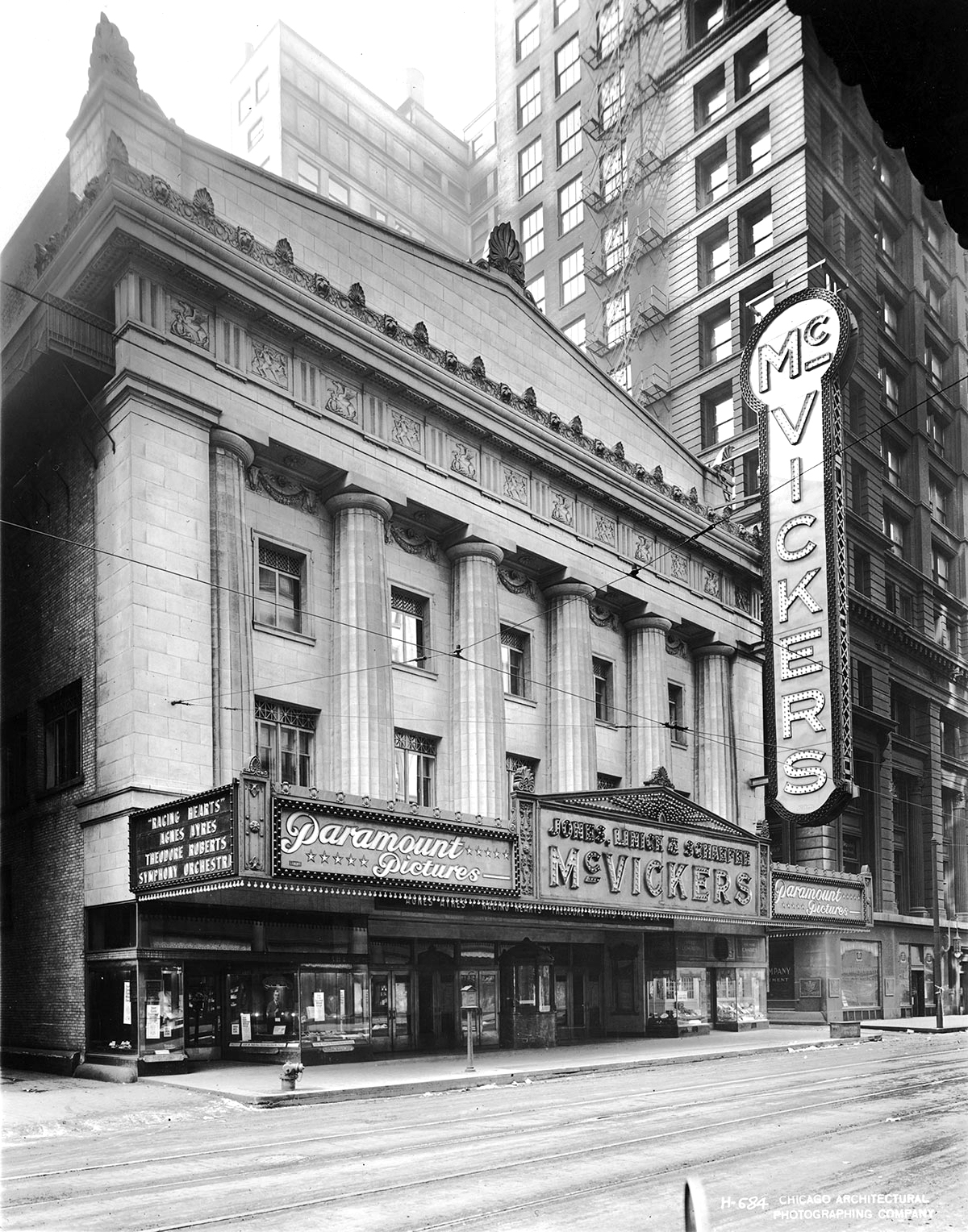 Will Seat 3,000.
In the interior the architects have carried out their scheme of dignified simplicity—at least, so far as we could glimpse from a fleeting visit through the lobby and main auditorium, with lights dimmed and workmen still rushing about.

There are said to be 3,000 seats, all of Circassian walnut with plush upholstery from the first row in the orchestra to the last row in the one huge balcony. There is a mezzanine floor floor with an electric fountain and fish pond, but there are no proscenium or mezzanine boxes.

Of course, Mae Tinee has told all about how “The Old Homestead,” which Denman Thompson first produced at one of the earlier McVickers theaters, in 1875, has been filmed and will be shown tomorrow night, along with an unusually elaborate musical program. 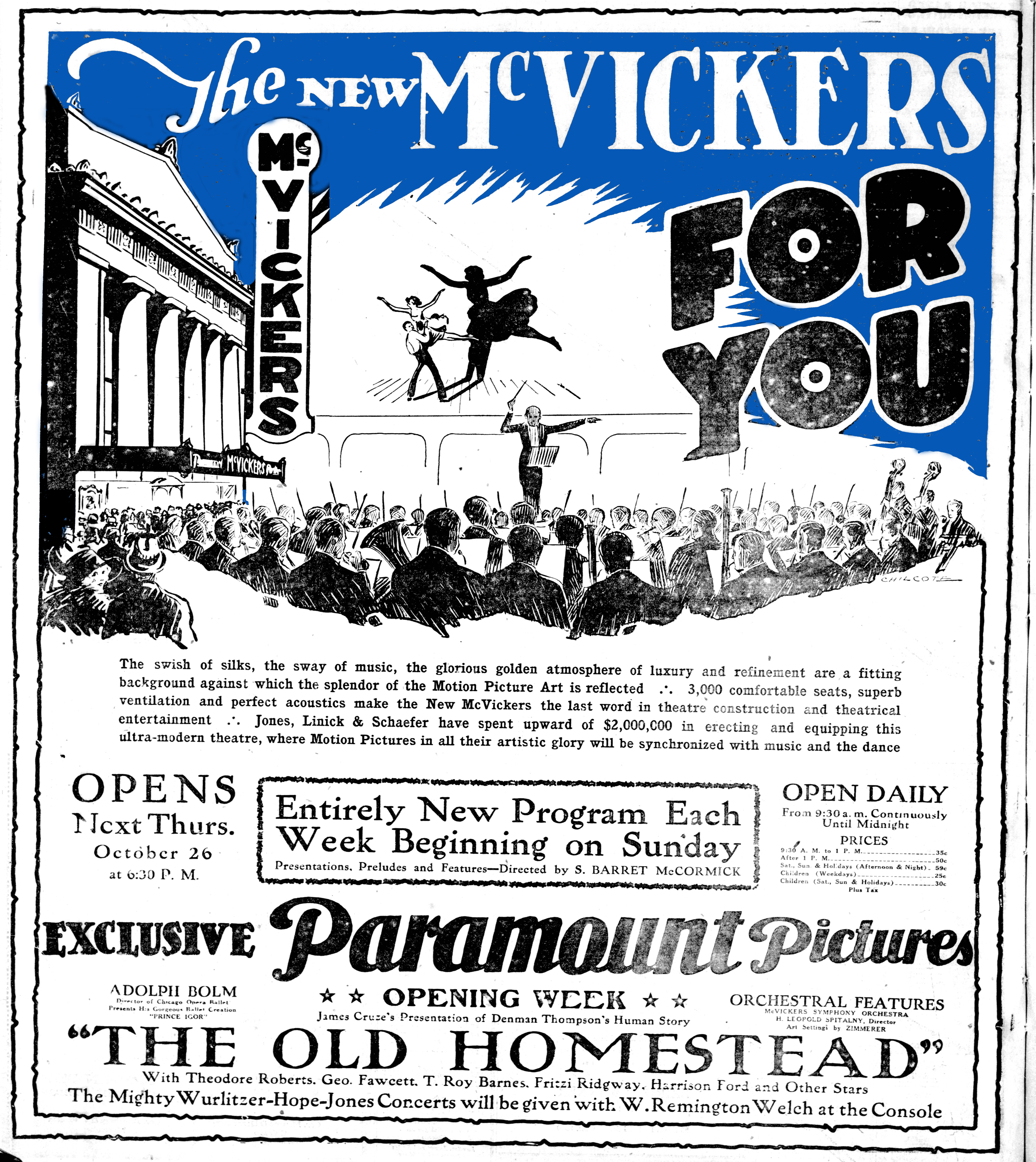 CLOSEUP.
Balaban & Katz announce that they are about to install the movietone and vitaphone in all their theaters and in many Lubliner & Trinz houses. This new form of entertainment will be introduced at McVickers theater on Friday, June 29, with an initial showing of “The Street Angel,” a Fox picture which will have the movietone synchronization.The Roosevelt will follow with “Sunrise,” also a Fox production. All other leading producers are synchronizing their big productions that will go to Balaban & Katz theaters. There will be no increase in the price of admittance to any of these theaters. 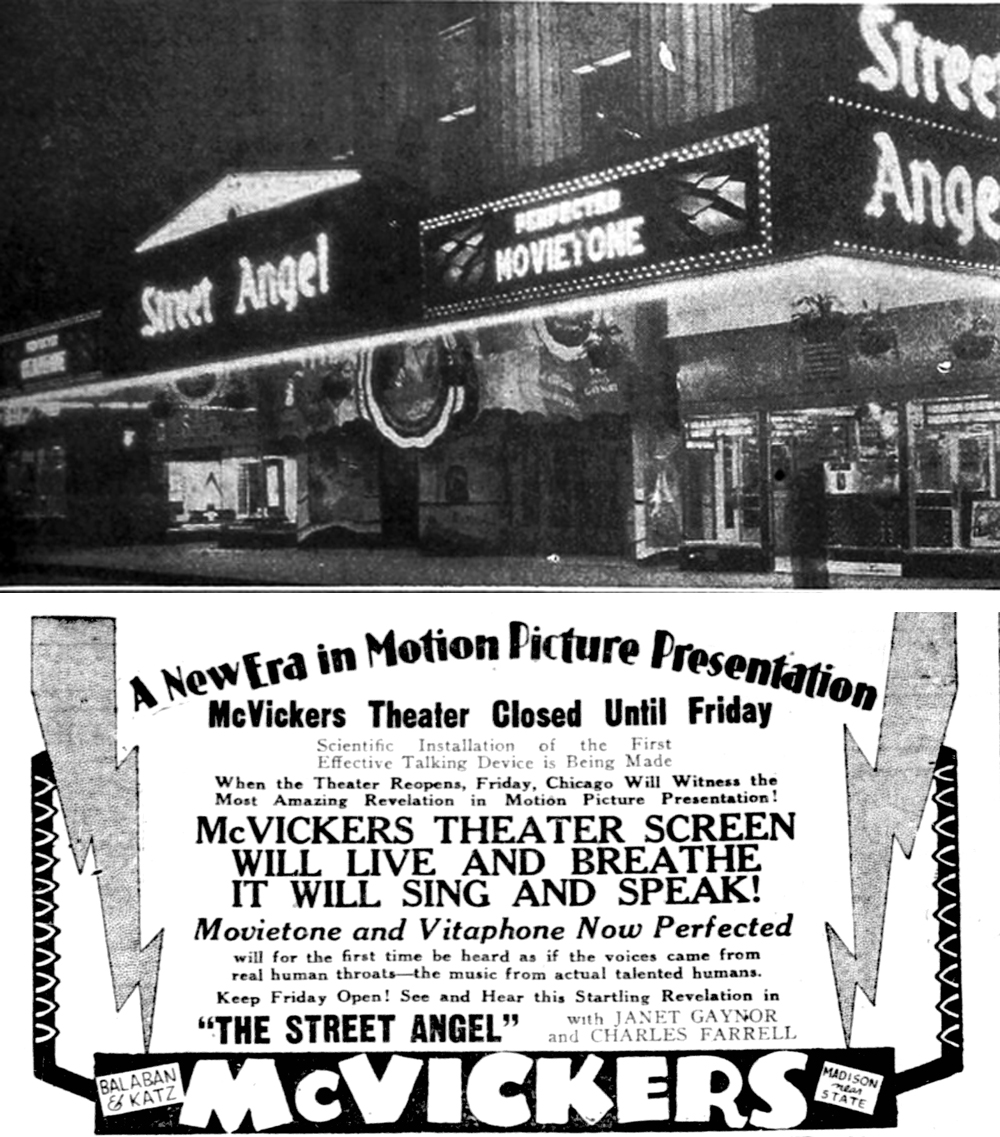 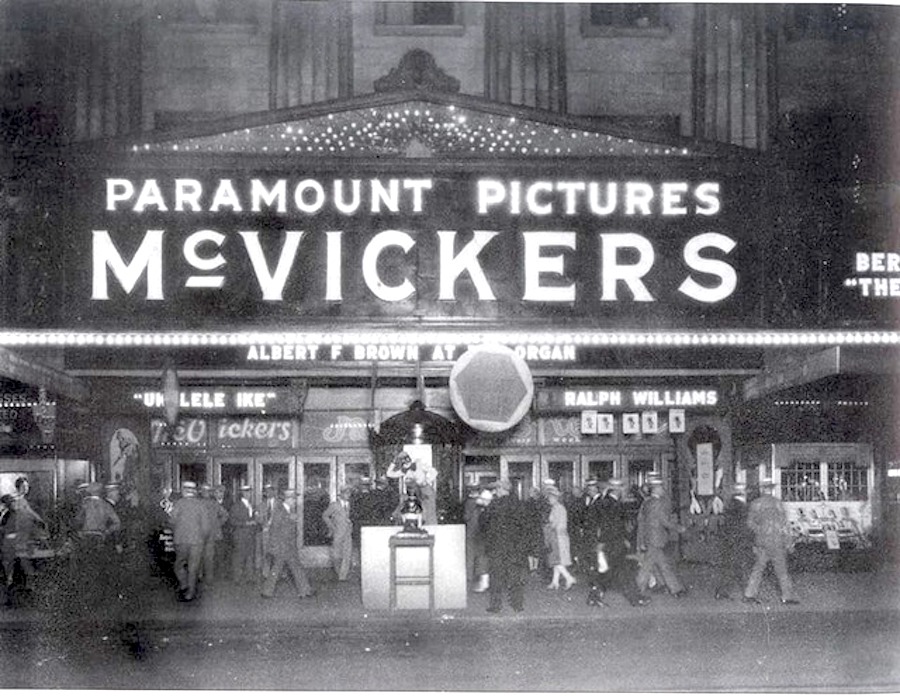 BY MAE TINEE
The film version of Rodgers and Hammerstein’s “Oklahoma!” which has played all over the world to an estimated 30 million persons, opened to an enthusiastic crowd yesterday in McVickers theater. The musical comedy proved its durability. It seems as fresh and exuberant as ever. The cast is excellent and the color is true and vivid.

Photographed and projected in the Todd-AO process, which utilizes a 77 millimeter film and a high fidelity soundtrack, the picture is thrown on a vast screen. While I don’t think it has as much illusion of depth as Cinerama, it is a beautiful and and enormous picture. There were a few technical difficulties, probably temporary, and the sound was overly loud at the opening performance, but in general it is richly satisfying, thoroughly enjoyable entertainment.

By Rudolph Unger
The McVickers Theater, the oldest in Chicago and the third oldest in the nation, is falling to the wrecker’s ball, ending a 127-year dram that starred such luminaries as James H. McVicker, John Wilkes Boothe, Sarah Bernhardt, John Barrymore, and Michael Todd.

The theater, with its classic Greek facade built in 1922 at 25 W. Madison St., was closed this summer by its owner, Citicorp Savings of Illinois, after it was found to be structurally unsafe. Four retail stores in the building also were closed.

“An engineering study showed, among other problems, that the classic Ionic columned front was leaning out into the street, so we decided it best to raze the building,” said Tom Hart, Citicorp spokesman.

The property had been purchased for $7 million in 1979 from the Chicago Board of Education, which had owned the land almost from Chicago’s inception, by First Federal Savings and Loan Association of Chicago, Citicorp’s predecessor.

“There are no immediate plans for the future use of the property, and many possible uses of the 80-by-190-foot site are possible,” Hart said.

James McVicker, a prominent Chicago actor, had leased the land from the school board in 1857 to build the first theater at a cost of $85,000. His financial backers in the venture included some of the city’s most prominent leaders—Potter Palmer, Marshall Field I and W. W. Kimball.

On Nov. 5, 1857, almost 127 years ago, the theater staged its first performance—a comedy entitled “Honeymoon” and a farce called “The Loan of a Lover.”

John Wilkes Booth, who three years hence would write his name in the book of infamy as the assassin of President Abraham Lincoln, appeared in the McVickers in 1862 in Shakespeare’s “Richard III.”

Also appearing at the theater were his father, Junius Brutius Booth, and a brother, Edwin. Edwin played Romeo to the Juliet of McVicker’s daughter, Mary, and the couple carried the romance off-stage and later married.

A few years before Lincoln’s assassination, Edwin Booth was shot at the McVicker’s stage by a man whose aim fell wide of his target.

When Sarah Bernhardt first toured America, she appeared in the McVicker’s. Though she was shunned by the city’s high society generally because French art and artists were suspect, Potter Palmer put her up in his Palmer House hotel and extra police had to be assigned to handle the crowds outside the theater when she arrived for her inaugural performance.

The touring company of the nation’s first musical comedy, “The Black Crook,” appeared in a then-unheard-of run of 56 performances.

The original brick and mortar auditorium built by McVicker burned down along with most of downtown in the Chicago Fire in 1871.

McVicker’s determination to rebuild on the site resulted in one of the first new buildings to open after the fire. Though ravaged several times by fire, the theater stood until it was replaced in 1922 by the current 1,921 seat structure, constructed by Jones, Linick and Schaefer, owners of the McVickers since 1913.

The theater introduced many innovations in the Roaring 20’s, including the first talking picture in the city, stage shows with full orchestras and a master of ceremonies, and, in the 1930s, double features.

The McVickers’ 80th anniversary was celebrated in 1937 by presenting the film “Marked Woman” featuring Bette Davis and Humphrey Bogart. That same year, an affiliate of Balaban & Katz obtained a 30-year lease on the building.

In subsequent years, many great films were shown on the McVickers screen, including Cecil B. DeMille’s “The Ten Commandments.”

For a short time in 1962, the McVickers returned to legitimate stage shows with performances of “Irma la Douce” and “La Plume de Ma Tante,” but it quickly reverted to the screen shows with “The Wonderful World of the Brothers Grimm” in Cinerama.

In 1970, it took a knockout blow at the box office when it was unable to present its closed-circuit television showing of Muhammad Ali’s 15th round technical knockout of Oscar Bonavena when the projector broke down during a preliminary bout. Fight fans streamed from the theater to another closed-circuit presentation of the bout in the Auditorium Theatre.

By 1971, the McVickers was screening rock westerns and X-rated films and closed for a awhile after a raid by city inspectors as part of a Loop crackdown on building code violations in show houses. 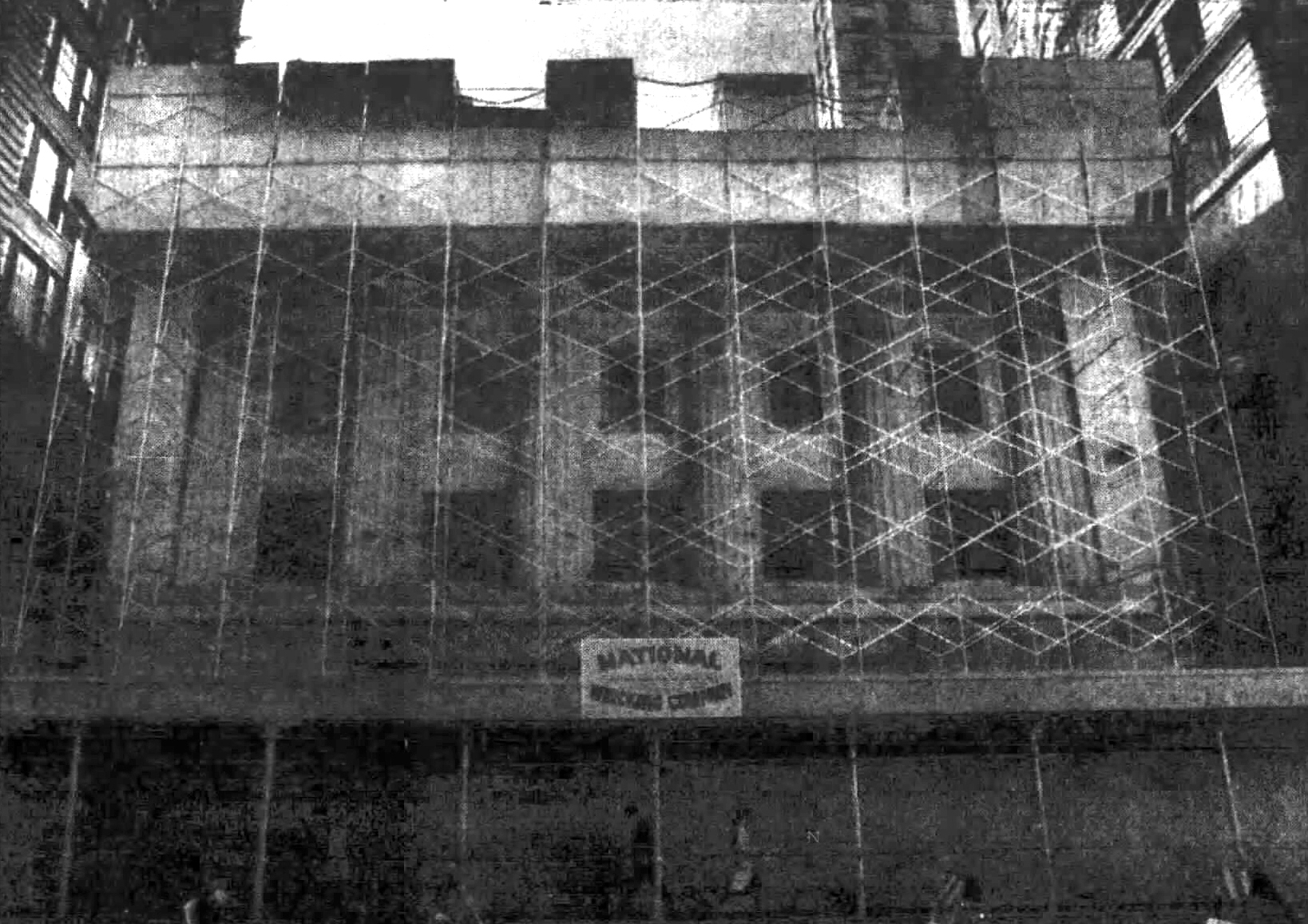 Framing covers the front if the Ionic-columned McVickers Theater at 25 W. Madison St. during demolition. An engineering study showed the building to be unsound and the owners chose to raze it.

Over the years, the McVickers has had its own real life dramas, too.

In 1941, a burly gunman robbed the cashier but was apprehended by a slight doorman who chased the bandit, tackled him at State and Madison Streets and sat on him until the police arrived.

In 1943, an ex-convict entered the second-floor business office with intent to rob it but was hit with a chair by an assistant manager. The ex-con staggered to the first floor lobby where he was nabbed by another employee.

In a 1933 holdup, the cashier fainted and in a 1934 heist, another cashier was struck in the face by flying glass when a robber, unhappy with the small take, smashed her booth window with his gun and fled.

In 1979, a woman employee was raped in the basement.

From pre-Civil War days to the post Vietnam era, the McVickers saw the best of days and the worst of days and reflected them on stage and screen. But like all plays, it too must end.