Work has begun on a new three-story build ing at the corner of Thirteenth street and Michigan avenue, Chicago, which will be occupied by the Winton Motor Carriage Co. branch. The exterior of the building will be constructed of white tile and plate glass and the interior will be fireproofed. The frontage on Michigan avenue will be 100 feet and on Thirteenth street will be 130 feet. The first story will be used for a show room and the second and third stories for machine shop and storage.

James Gamble Rogers is designing a mercantile building, three stories high, 100×130 feet in ground dimensions, to be built at the northeast corner of Thirteenth street and Michigan boulevard for the Winton Motor Vehicle company at a cost of $80,000. 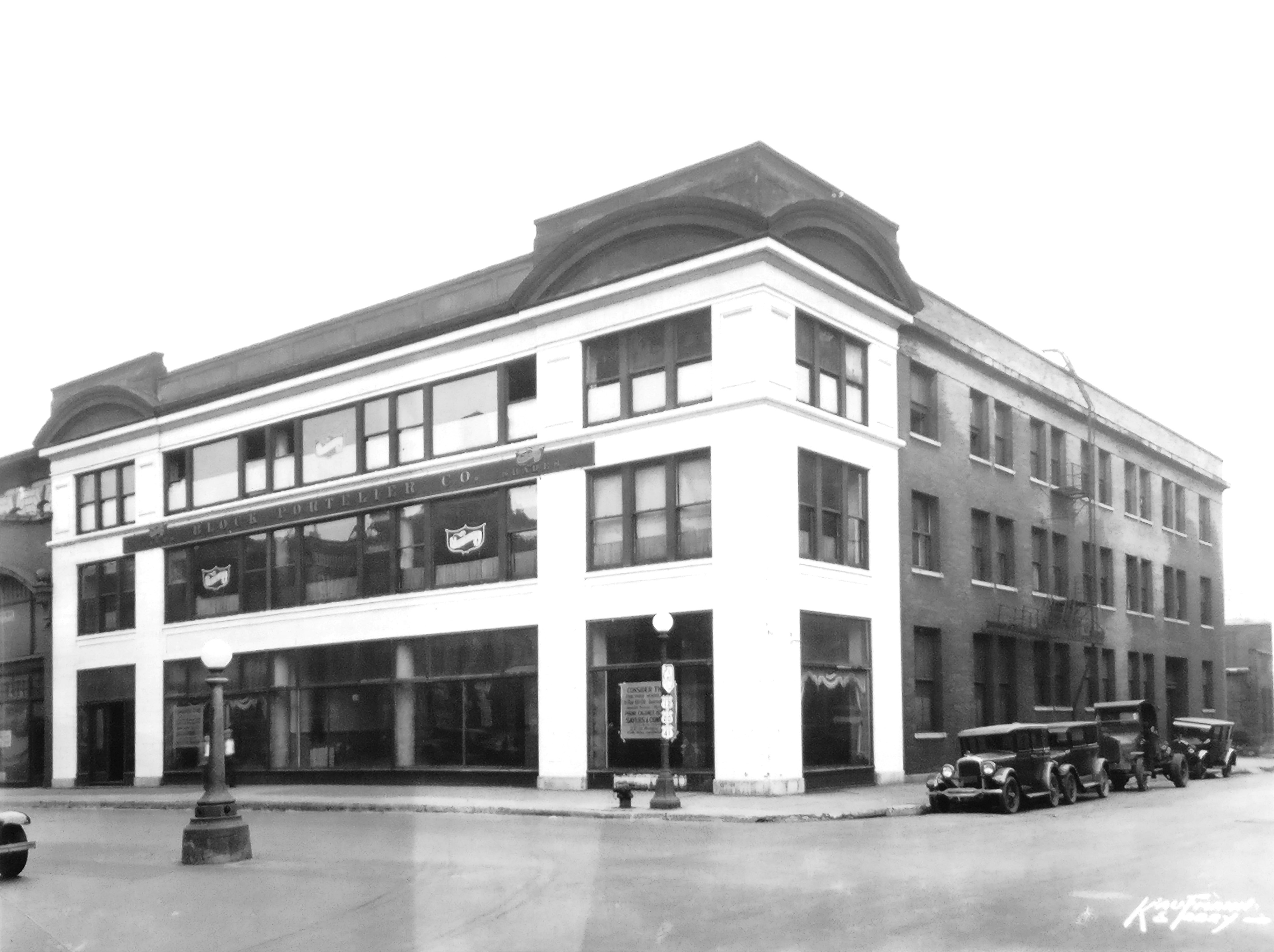 A Reinforced Concrete Store Building in Chicago.
An interesting embodiment of advanced ideas in reinforced concrete construction is the store building now being erected in Chicago at the northeast corner of Thirteenth Street and Michigan Avenue. This building is 100×130 feet, seven stories in height, with brick outer walls. The basement is 10 feet inches high; the first story is 15 feet high, and the remain ing stories are 12 feet high. Each door, with its supporting girders and columns, is concrete monolith reinforced with round steel rods of an elastic limit of 36,000 pounds. The rods are of widely varying sizes to suit their locations. The general scheme and some of the details of the construction are shown by ac companying drawings. The columns are spaced 15 feet inches by 20 feet, and have bases 11 feet square, so as to reduce the load to 4,000 pounds per square foot on the fine sand in which the foundations are laid. 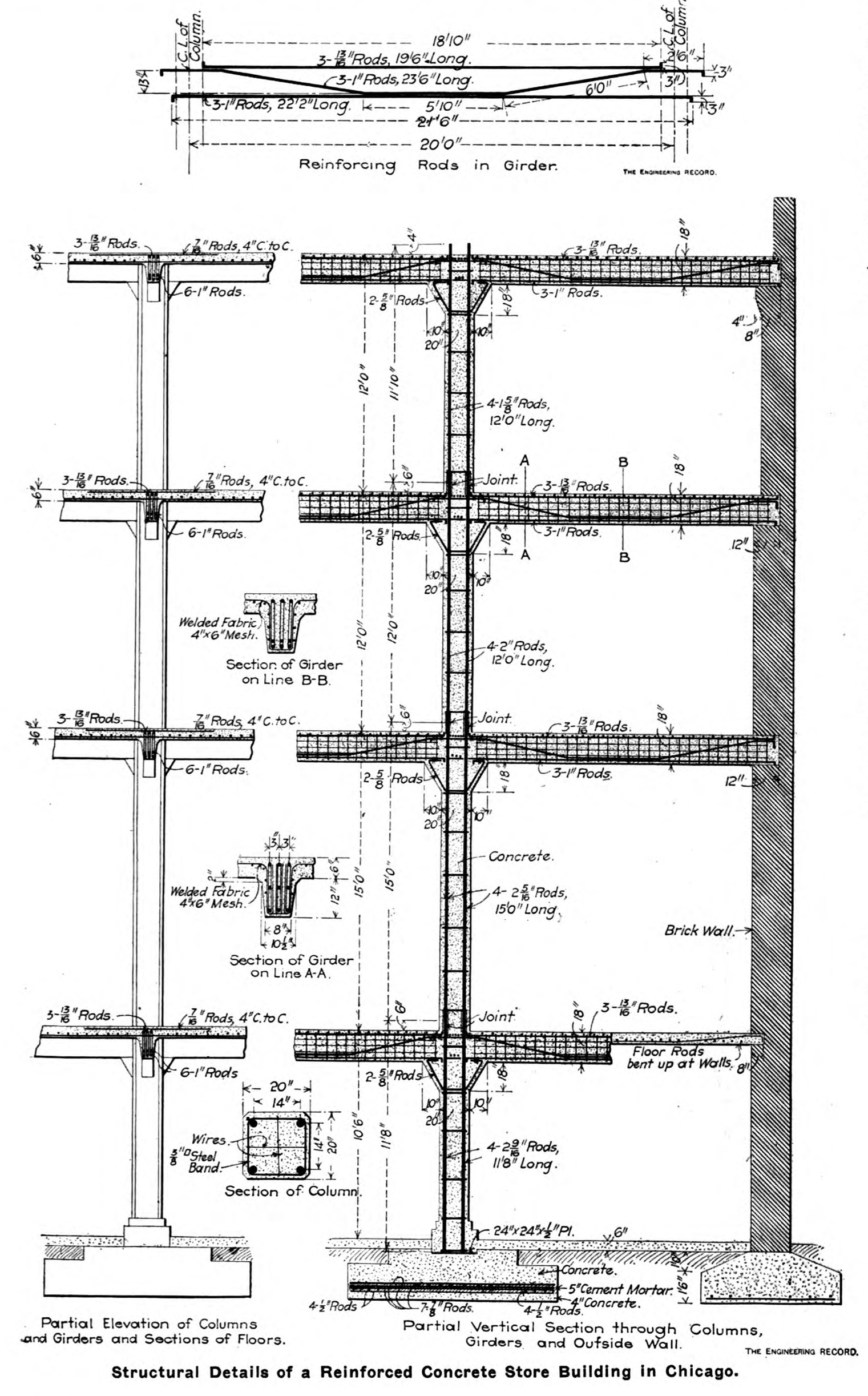 The construction of the column bases is shown by some of the drawings. A layer of 1:2:3 Portland cement concrete inches thick was first laid in the bottom of each pit, and then four 175-inch rods were placed side by side, near and parallel to each edge of the square pier. Next came two sets of 7/8-inch rods, seven in each set, spaced inches apart and laid both ways at right angles, across the central portion of the footing, as seen in the drawing. Lastly, two sets of diagonal l-inch rods, seven in each set, were laid on and parallel to the diagonals of the square. The rods were then tied together at their intersections, and 1:4 mortar was poured on to and around the rods to depth of inches above the first layer of concrete, the rods being shaken to settle the mass, which was then thoroughly tamped. Above this second layer 1:2:3 concrete was placed in forms to finish the pier as shown. The bending moment was plotted as the dotted parabolic curve shown in the transverse section of the footing, and at its highest point there was embedded in the pier a ½ inch steel plate, feet square, upon which stand the four vertical column rods. 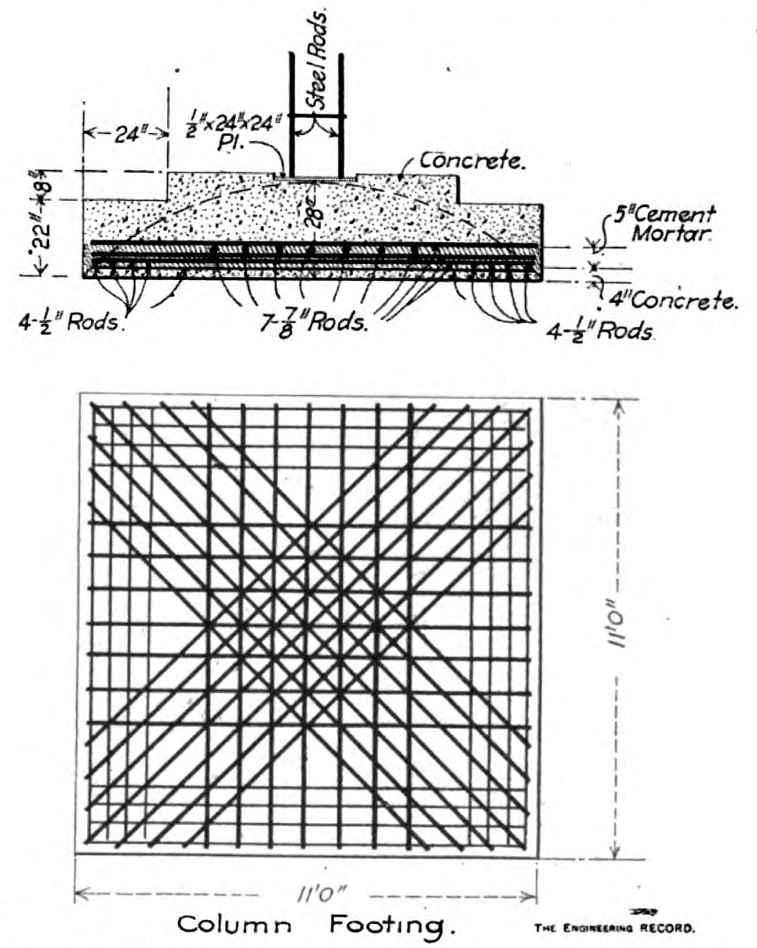 These vertical rods in the corners of the columns extend only from door to ?oor, with joints inches above the floor level in each story. Each joint is made with a sleeve of gas pipe, into which the ends of the’ two sections of a rod are wedged. The rods are 27/16 inches in diameter for the first story, and de crease to 1 inch diameter for the top story. Bars of 3/8-inch square steel, at intervals of about 24 inches, bind all four vertical rods together. These bands have loops of wire twisted tightly, connecting the centers of the opposite sides and offering additional resistance to the tendency of the vertical rods to spread. One of the detail drawings shows the design of the reinforcement in a girder, the rods form ing a sort of truss. The average girder con tains three of these trusses, thus having three l-inch tension rods at its bottom, three 1~inch shear rods, and three {1.1-inch top rods in com pression. The design limited the floor thick ness to 6 inches, with a girder depth below this of 12 inches. The girder trusses were designed to come within 1 inch of the top of the ?oor, in order to gain the fullest advantage possible. The three girder rods of each truss are con nected by means of electrically-welded fabric, one net enveloping each girder at each end for one-third of the span and being securely tied to the rods at the intersections. The three trusses are tied together by means of another net extending across the center third of the span only. These details are plainly shown in some of the sections reproduced among the drawings. This mode of application of the stirrups connects the latter horizontally every 4 inches of the depth of the girder. One of the views shows the intersection and interlocking of the girders at a column, also the ends of the four column rods, the conduit for electric wires, which is carried inside the concrete among the rods, and the ends of the electrically-welded fabric mentioned above. The corbels under the ends of the girders at each column are rein forced, as shown, by bent 5/8-inch rods fastened to the girder rods. 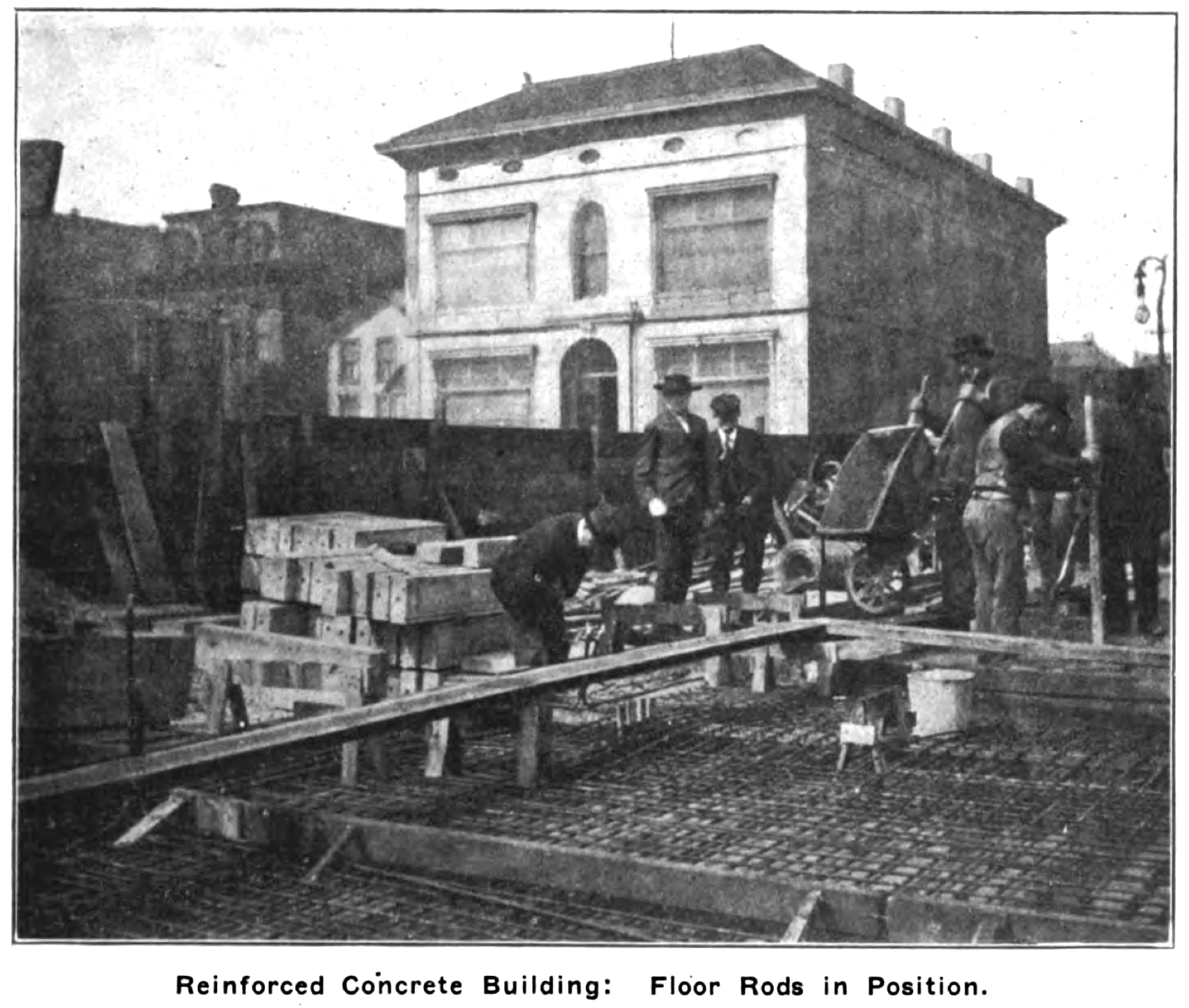 The main floor rods are 7/16 inch in diameter, are spaced 4 inches apart in both directions, and are carried through the girder trusses. Additional floor rods, as can be seen in one of the photographs, as well as in the drawings. are run over the trusses, extending 3 to 5 feet on either side, with hooked ends fastened to the bottom floor rods. These additional rods are intended to take care of the negative bending moments developed. The ends of each girder and floor rod are bent at right angles to the body of the rod to act as anchors. These anchors are 3 inches long on the girder rods and 1-1/2 inches on the floor rods. The outer or brick side walls are not built above the levels of the girder trusses until the latter are put in place. Thus the ends of the girders are built into the walls as they go up. 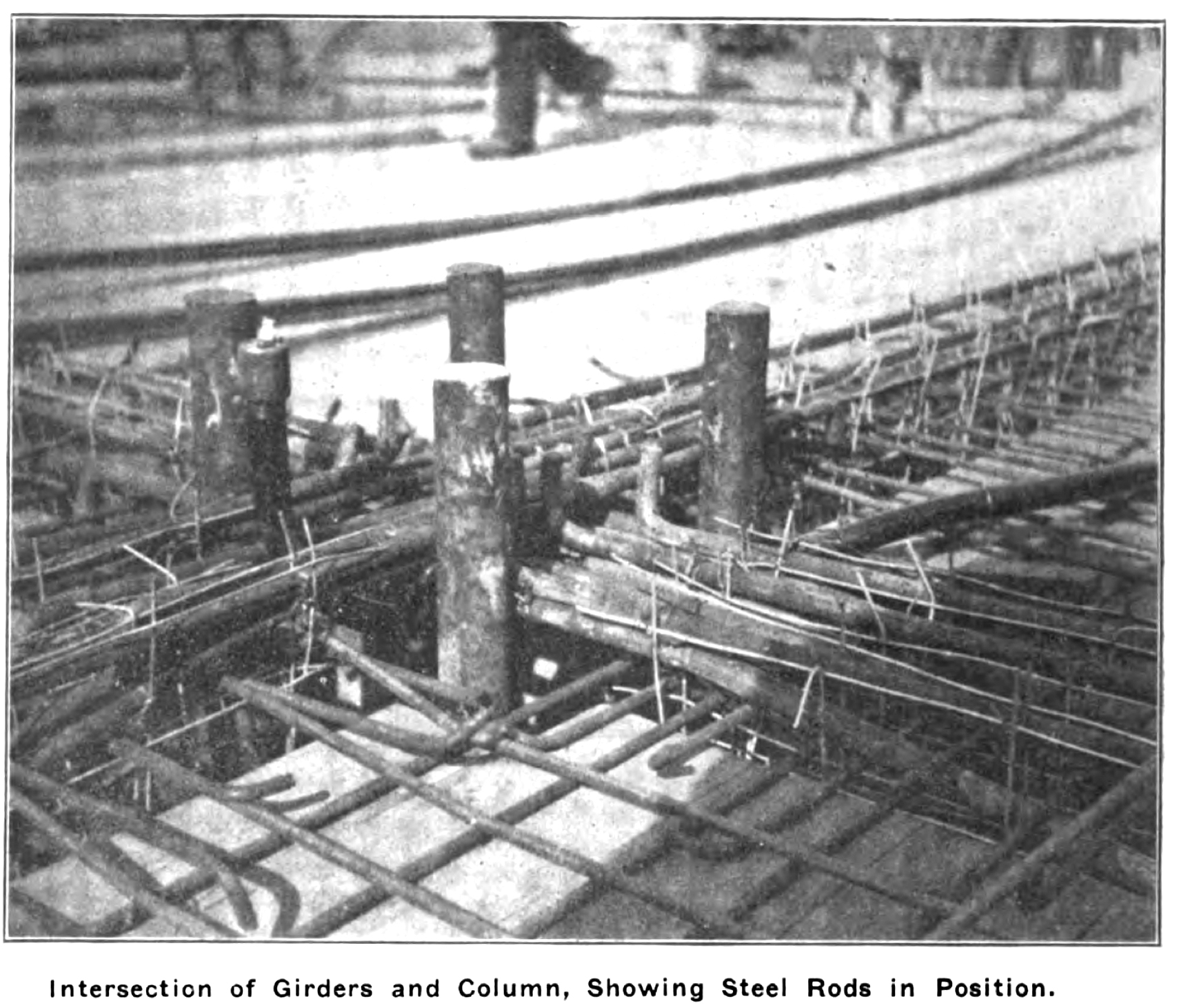 As the weight of the floors is 75 pounds per square foot, the molds for them are strongly made and securely fastened together. An accompanying view gives a good idea of the ar rangement of the molds and bracing. For the columns l-3/4-inch material is held every 30 inches by wedges in reinforcing clamps of 2×6 inch stuff. The girder bottom molds are supported on 4×6-inch posts. each resting upon a double wedge by means of which a precise alignment is obtained. thus preventing the sagging of these bottom girder strips, which might place the tension reinforcing rods too near to the neutral axis, a thing which has been known to happen in reinforced concrete work. These girder mold planks also carry the molds for the floor. The floor molds are in the form of inverted boxes 4 feet 7 inches by 15 feet, and four of them are laid and bolted together to form a section, the outer exposed ends and sides forming the sides of the girder molds.

The cement used is Vulcanite, and the concrete is being mixed in a Smith machine of 60 cubic yards capacity per day of eight hours. The proportion of voids in the materials is measured every morning and the concrete is mixed accordingly, the desired ratio being 1:2:2 of cement, sharp torpedo sand and clean screenedroo?ng gravel ofa size to pass through a XXX-inch mesh.

The concreting is carried on by two eight hour shifts, the interval of no work between 1 A. M. and 7 A. M. not being deleterious to the result. One of the views also shows the trestle adopted to carry the barrows of concrete over the ?oor rods. The concrete is mixed very wet, and after being poured on, is puddled with small rods to work the air out. The mixtures used in the floors, columns and girders have proven practically watertight. After one ?oor has set ten days the molds are dropped, leaving in place girder and panel supports. The molds are then carried up one story, re-erected, and the next floor put in. About fifteen days per floor are required for this building. All the work of bending the ends of the rods, building up and tying the girders, etc., is done on the spot by two men and two helpers.

Mr. E. Lee Heidenreich is the engineer for the armored concrete construction; Mr. James Gamble Rogers, the architect for the building. and Mr. James O. Heyworth is the contractor. 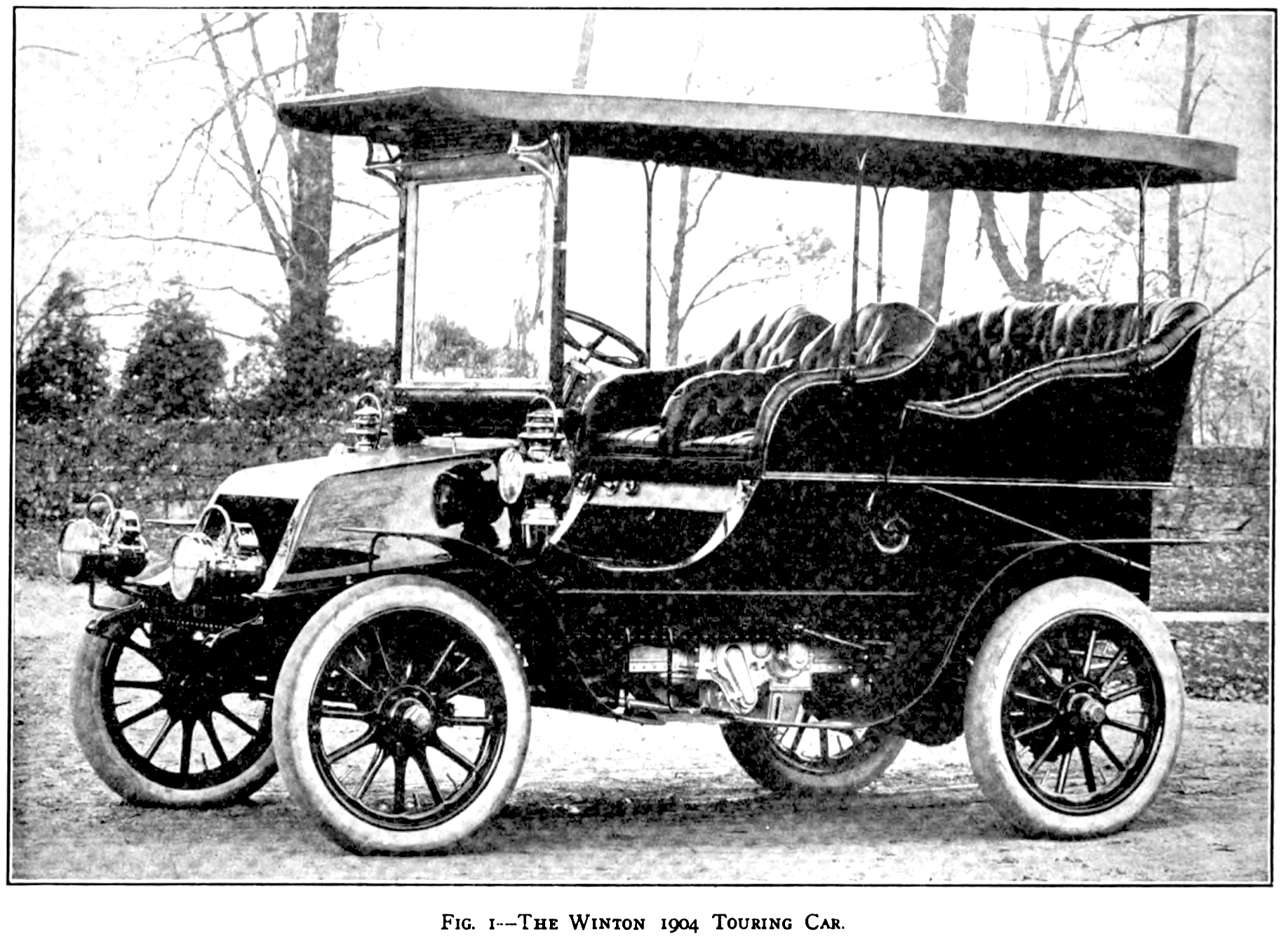 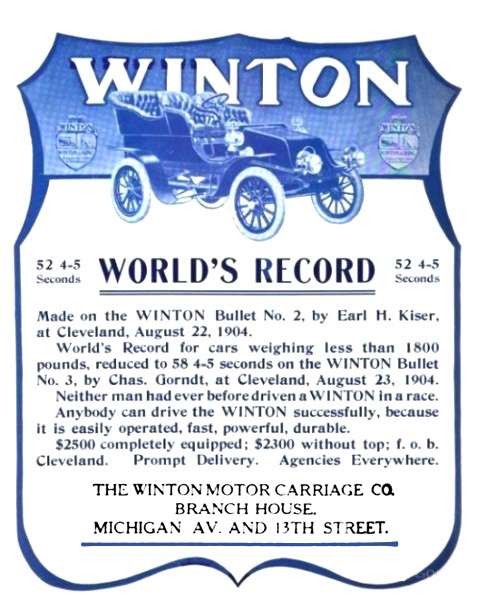 WINTON.
Mr. C. H. Tucker, western manager of the Chicago branch of the Winton Motor Carriage Co., located at 1255-57-59 Michigan avenue, is at present one of the busiest automobile men in Chicago. The new Winton four-cylinder cars, with vertical motors, are largely responsible for this. The Winton sales room is one of the finest along Automobile Row, being a three-story building, with 100 feet frontage on Michigan avenue and 130 feet on Thirteenth street. The first floor, devoted to a salesroom and offices, with receiving room in the rear, has excellent light, cement floor and steam heat. The second floor serves for storage space and on the third all that is necessary in the repairing line can be accomplished. This floor is fitted with mod ern machinery, and expert machinists are always on hand. Mr. Tucker Is distributor of Winton cars for eleven states, and has selling agents in different centers in these. His associations with the house of Winton, date from 1902, when he became Chicago representative, but it was not until the fall of 1904 that he became western manager. Previous to his associations with this firm he represented the Locomobile interests in Chicago, having connected himself with them in 1900. Mr. Tucker Is a native of Providence, R. I., being one of the many who have “Gone West.” During the Chicago show he will be constantly In attend ance at the Winton stand, and the new models will also be exhibited at the salesroom. 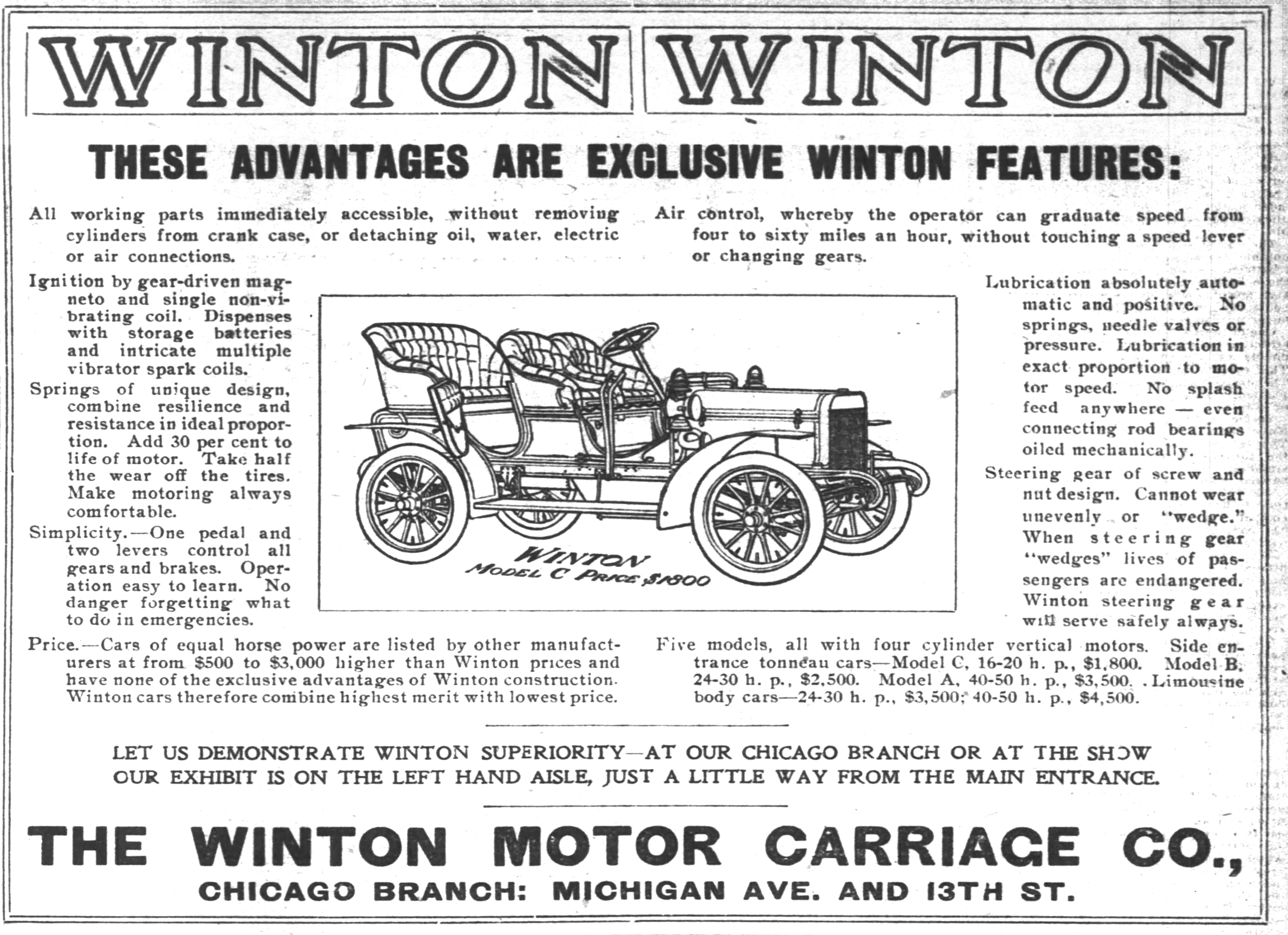 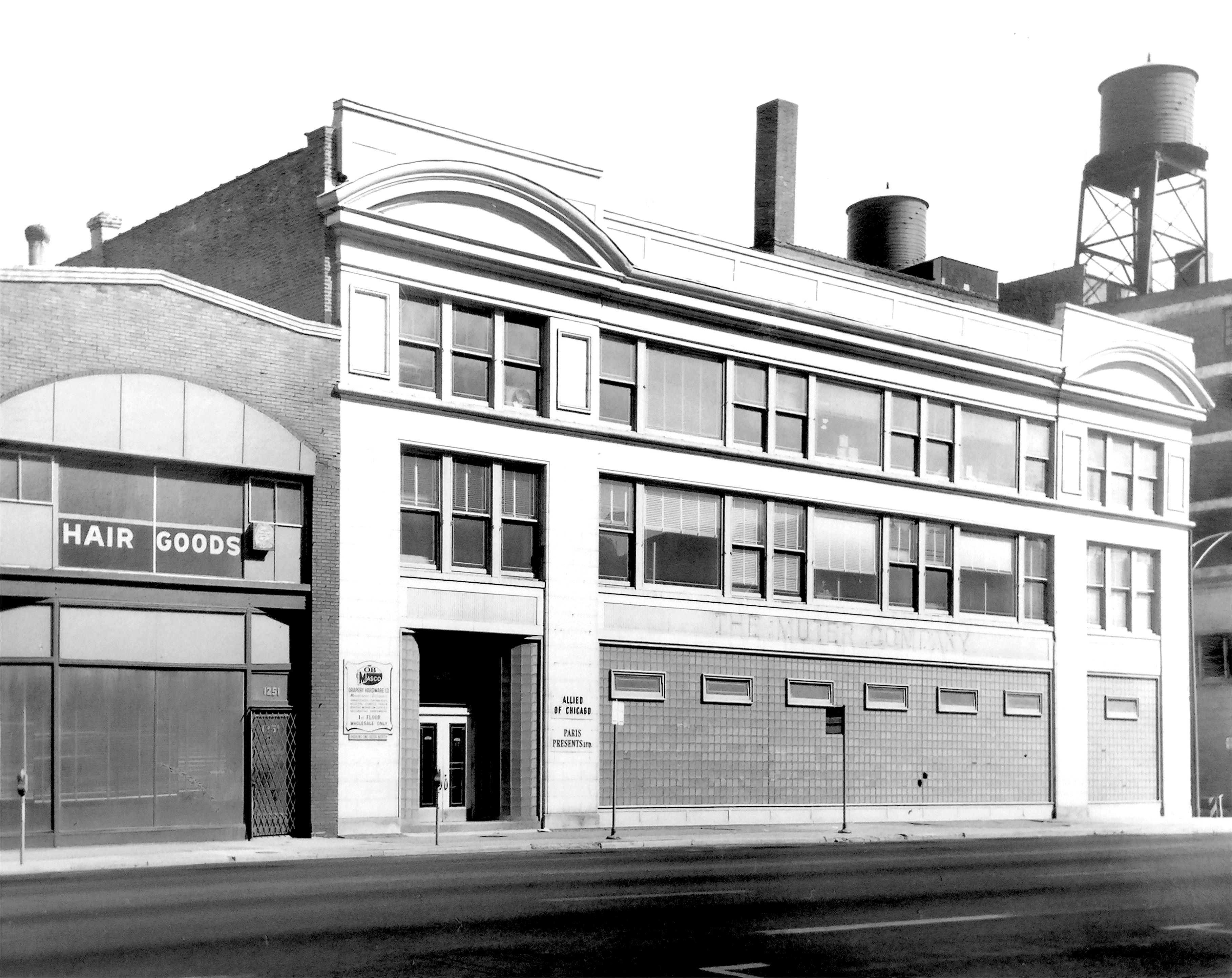 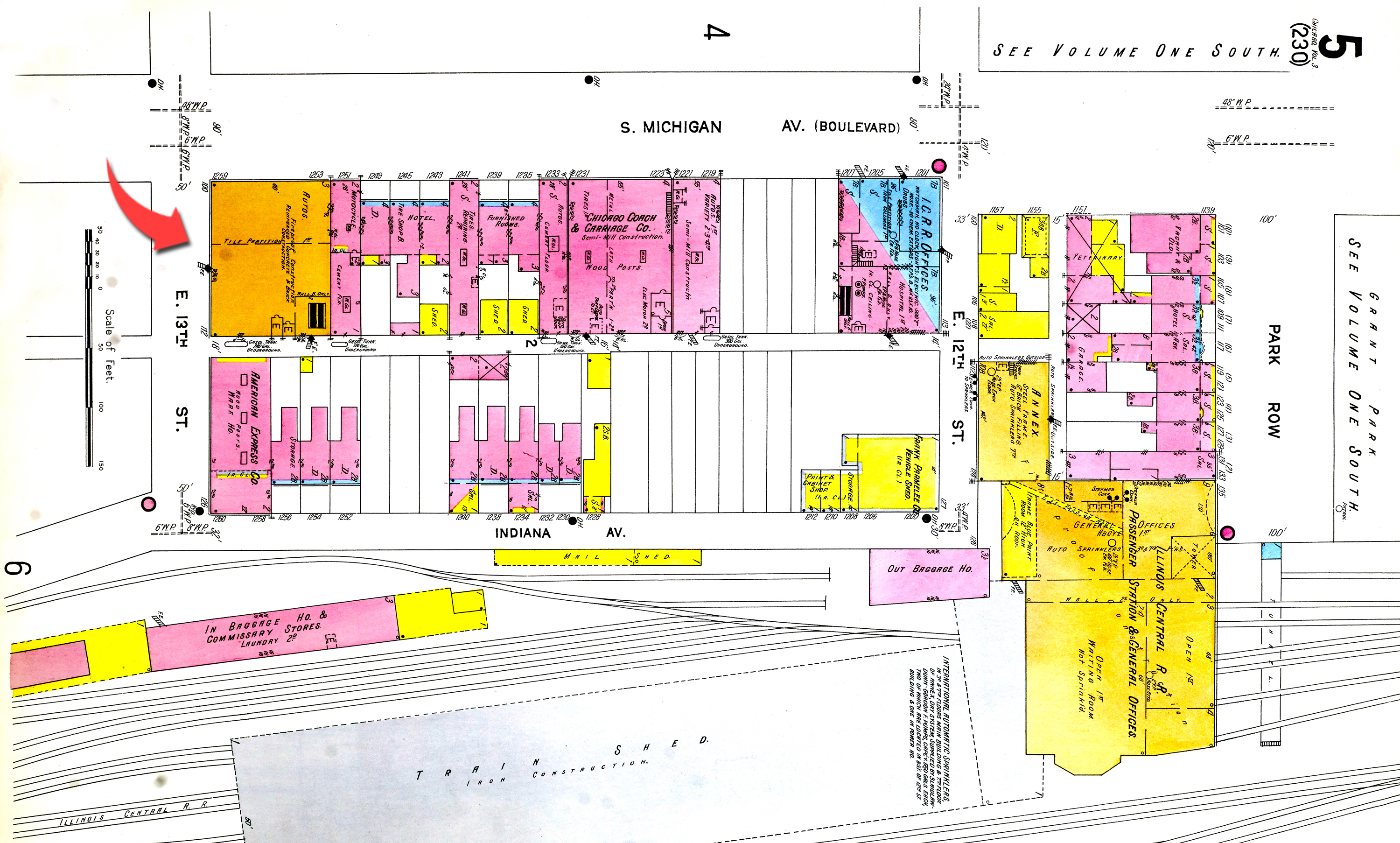 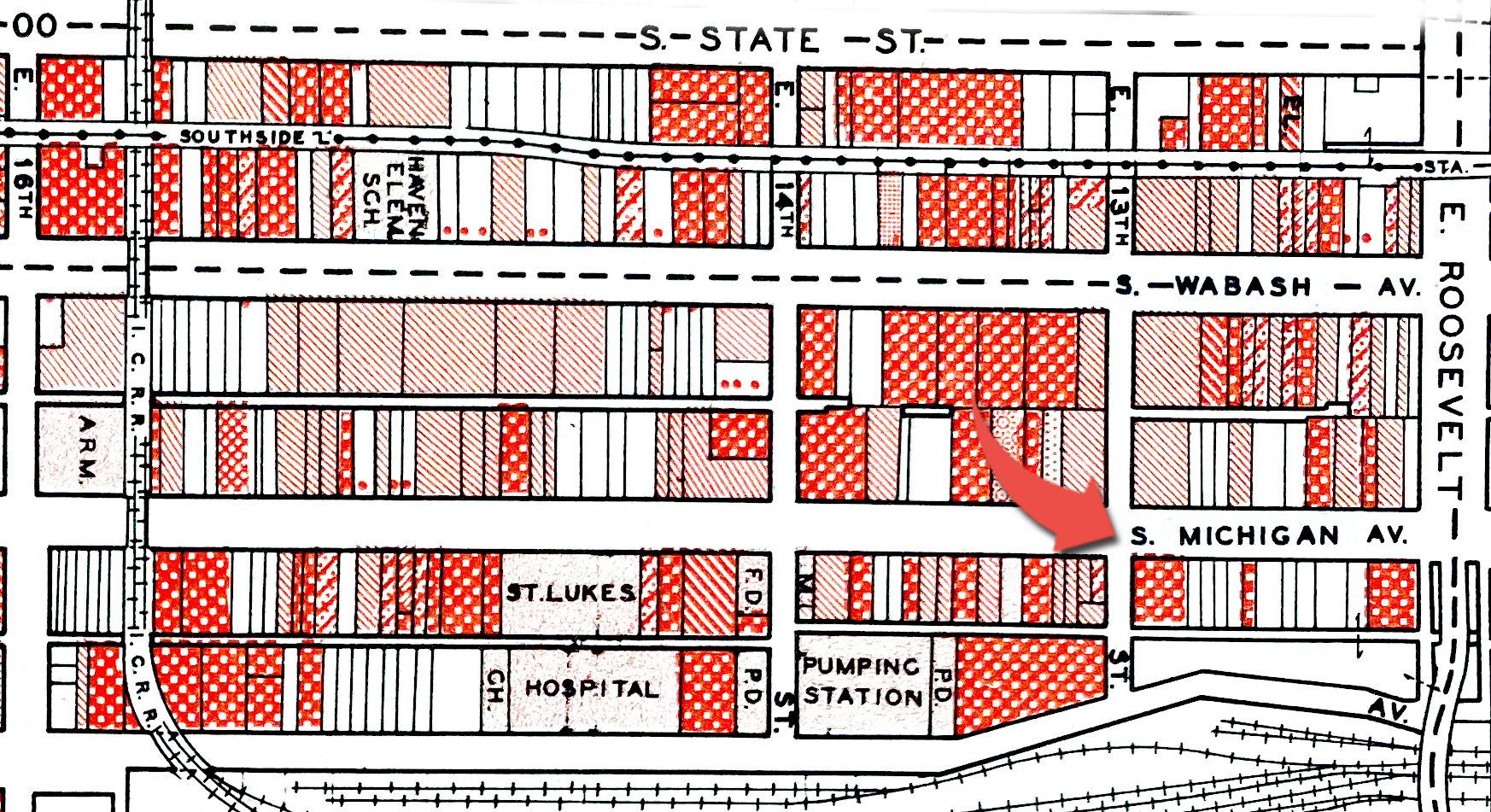 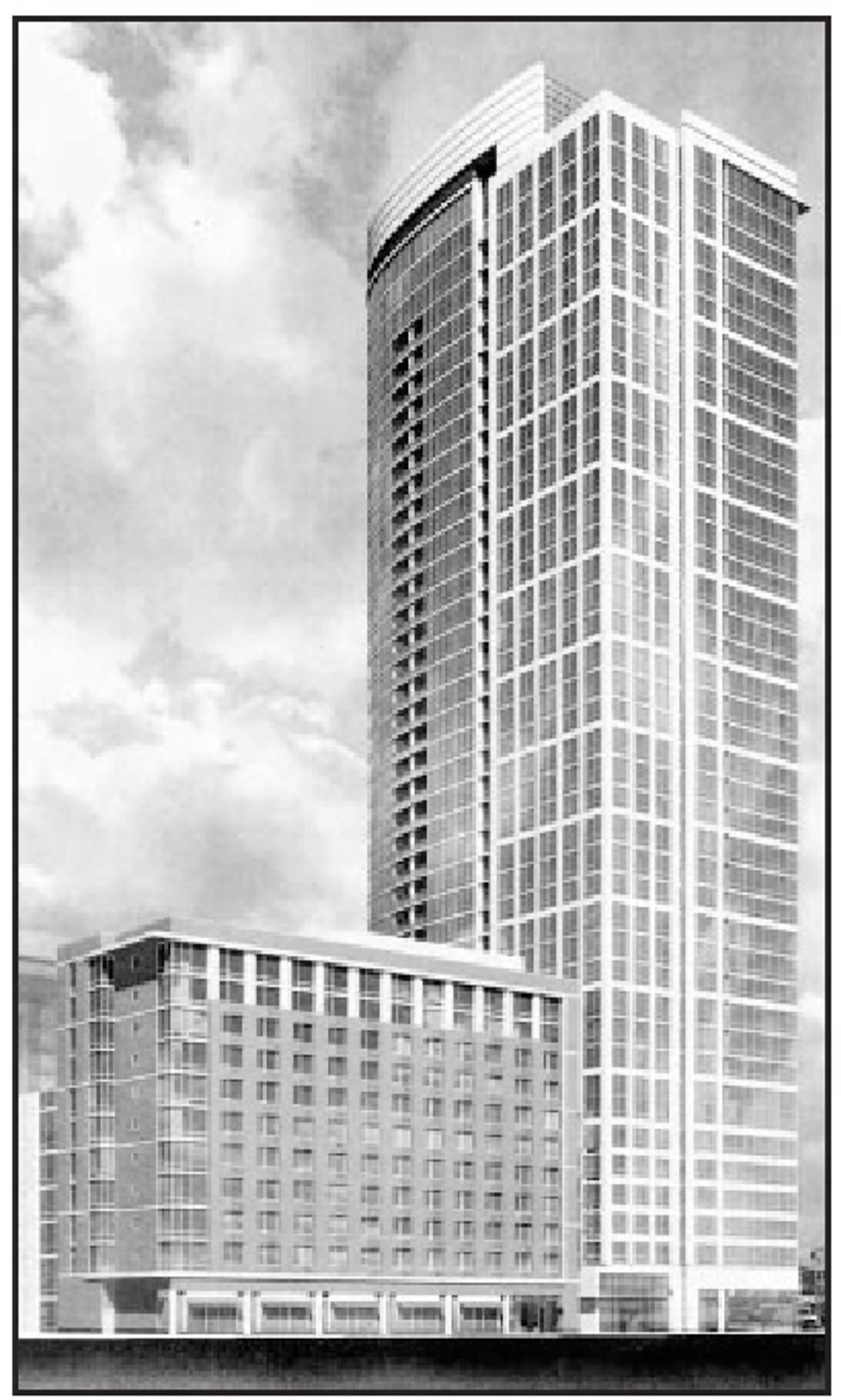 Central Station, 1255 S. Michigan Ave., Chicago.
The big Central Station development in Chicago’s South Loop is the site of two new adjoined apartment buildings, which just got under way. The two buildings will cost $122 million, much of which is being financed by tax-exempt bonds from the Chicago Department of housing.

The taller of the two buildings, at 40 stories, will have market-rate apartments. The 11-story building will have 100 affordable apartments for seniors, according to B. Timothy Desmond, Chicago office president at Developer Forest City Residential Inc., Cleveland.

The senior building, whose name hasn’t been finalized, will be for independent seniors. The building won’t have meals or services, but it will have several community areas for activities. Monthly rent for a one-bedroom apartment will start at $728. In order to qualify for an apartment, a two-person senior household needs a combined income of less than $36,180. The building will be finished in the fall of 2006.