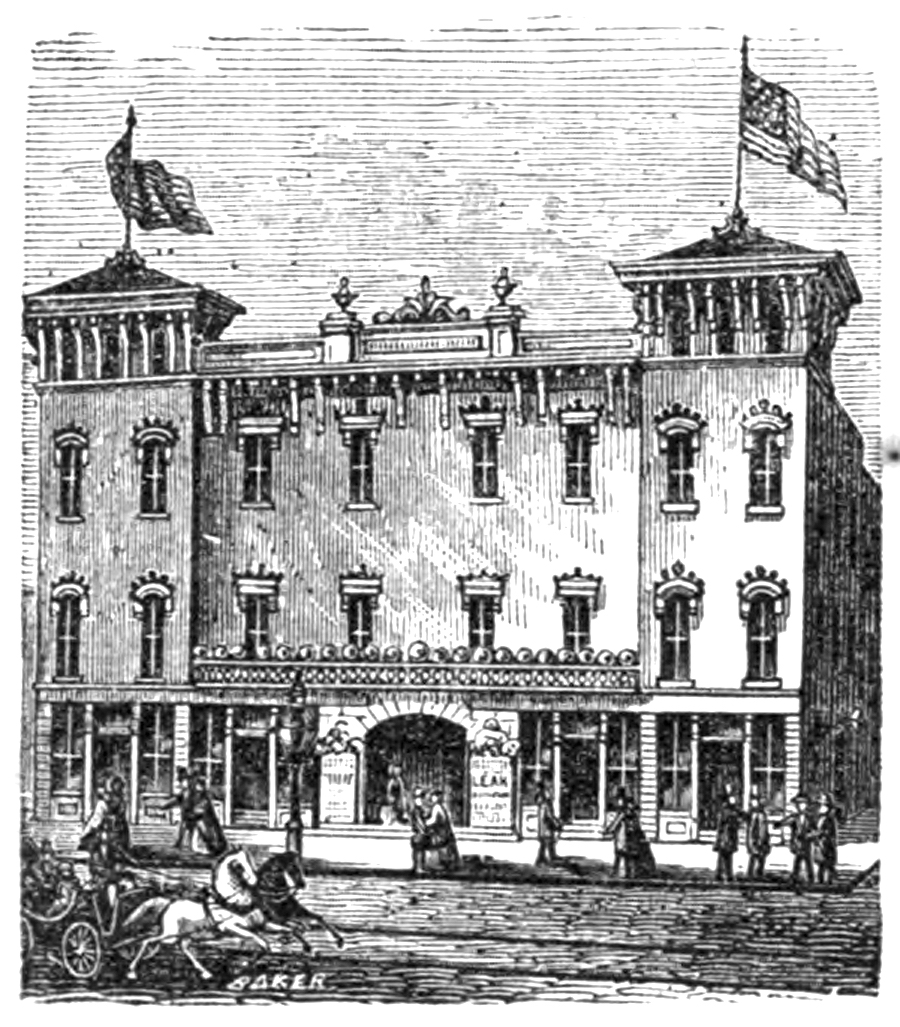 COMEDY IN CHICAGO.
McVicker has domesticated Comedy among us. He alone has been successful in making it a constant, never-failing, permanent amusement. Others have made the attempt, but every such attempt witnessed a failure. McVicker’s Theatre is devoted to Tragedies, Comic Drama, Operas, and Grand Concerts. From the night it was opened, October, 1857, with the exception of about seven weeks, it has always been filled—always been kept open to the public, in successful operation; and although other theatres in the West, with the excitement and parade of actors of celebrity, and taking scenic effects, have sometimes witnessed successful runs for a season, yet no theatre, perhaps, in this country, has, for a series of years, been so uniformly well attended, nor by such intelligent audiences. Nothing has ever been badly done by McVicker; the public never have been disappointed in any of the representations of his Theatre. He has not only had, in the long run, the best comic company of any Western theatre, but his own genius for representation is unrivaled. Take him all in all, he is the most effective, irresistible Comedian our stage has ever had. Aside from his native genius and blood-felt love of Comedy, he possesses unfailing resources in his intellectual acquirements. He commenced histrionic pursuits in New Orleans, at the St.Charles Theatre, in 1841. In May, 1847, he left St. Louis for New York, via Chicago, on a tour of pleasure and observation. While here he was favorably impressed with the city and the people, and settled here for life. He became stage manager of Mr. J. B. Rice’s Chicago Theatre, which was first located on Randolph street. It was destroyed by fire, but subsequently rebuilt on Dearborn street.

Mr. McVicker learned the history of the Drama of America ; he studied the causes of its failures and successes, in this great Valley of the West. When the present magnificent structure was erected, known as McVicker’s Theatre, covering an area of eighty-two by one hundred and ninety feet, at an expense of eighty thousand dollars, besides the scenic and interior fittings, which cost some twenty thousand dollars more, he became its master, and started out with the resolute purpose of establishing the Comic Drama as a permanent institution and amusement among our people. With him histrionic art was idolatry. Mr. McVicker has from the first, while giving to the public first-class “stars,” so guided his representations, especially of the modern Comedies and farces, he has so put his pieces on the stage, and so perfectly adapted them to his characters, and his characters to them, that each part seemed almost equally attractive—for each one was completely filled.

Under such auspices his Theatre has flourished. The owner of his Theatre, and complete master of it and all its arrangements, Mr. McVicker has always developed the talents of every member of his company, with a generous disposition not only to give fair play to all, but to each one a fair opportunity to distinguish himself. The great scope of his efforts seems invariably to have been the simple delineation of hu- man nature. His own acting is always characteristic; for it is like himself, and unlike anybody else. He not only carries the standard of impersonation further than most Comedians, but in the modern Comedies he adds appropriately to the familiar parts without injustice or injury to the author happy strokes, that bear upon the excitements and topics of the day; and honest country people have often gone away with the impression that he made up his part as he went along. And in fact, these simple country people are nearly right in this supposition; for McVicker so easily and unaffectedly blends his actions and feelings with the characters he impersonates, that the most constant habitue of the Theatre is left with nearly the same impression. That overflowing of human nature always witnessed on his stage, in all his plays, breathes an atmosphere through his theatre that is indescribably charming. “One touch of nature makes us all akin.”

These qualities have made McVicker’s Theatre what no other in this “Western country has ever been a familiar home, drawing-room and family circle. Here is the secret of its unparalleled success. There is no place, perhaps, in this city, where are witnessed such a constant succession of smiles and laughter of intellectual and inspiring amusement, and often the unbidden gushings of genuine feeling. 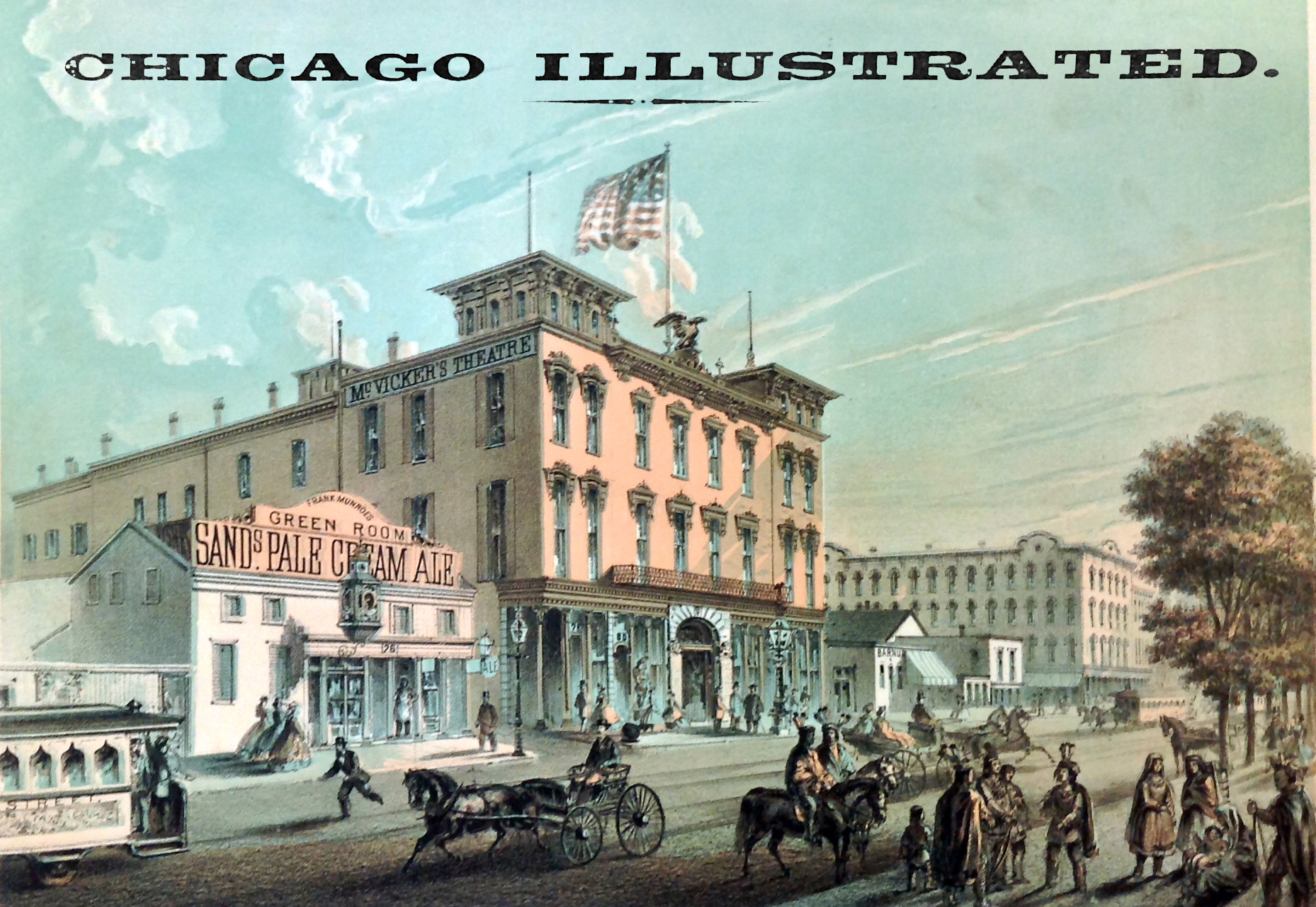 McVicker’s Theatre—Is built upon the School block, fronting on Madison street, between Dearborn and State streets, and is centrally located. It is built of red brick, with stone trimmings. It has a front on Madison street of 82 feet, with a depth of 190 feet. It stands alone, wholly separated from any other building, by wide alleys on each side, and in the rear. The front portion of the building is devoted to business purposes,—the ground floor to stores, and the upper floors to offices, club rooms, and like purposes. The entrance is thirty feet wide and forty deep; persons entering the door may ascend by easy flights of stairs to the auditorium, or pass under the dress circle into the parquette. The means of exit are easy, and in case of alarm the audience could get out without difficulty.

The Theatre proper is 79 feet wide by 147 feet deep. The stage has a depth of 61 feet, and the auditorium 86. There are seats for over 1,000 persons, while the lobby and aisles can accommodate 250 more. On occasions of special interest there have been as many as 2,000 persons in the audience. Boyington and Wheelock were originally the architects, though the building was mostly erected under the superintendence of Mr. James H. McVicker. It was built in 1857, at a cost of $83,000, and in 1865 was re-modeled at an additional cost of $33,000. It was commenced in April, 1857, and opened to the public on the 15th of October in the same year, with the comedy of the “Honeymoon.” It is probably one of the most comfortable and convenient theatre in the United States. Its stage arrangements are admirable. Standing alone, the building is capable of the most thorough ventilation. The theatre was erected in one of the most disastrous financial seasons Chicago has witnessed, and it required unusual nerve to carry the work to completion. For several years the investment was of questionable profit, and the proprietorship passed through a variety of hands. On the first of April, 1862, Mr. McVicker became the sole owner, as he had been the manager from the opening, and as he continues to be. Since that time the theatre has been a source of profit, and the perseverance of the proprietor, as well as his skill and experience professionally as a manager, have been rewarded in the most substantial manner. Some years ago, Mr. Samuel Myers, brother-in-law of Mr. McVicker, and an actor long and favorably known to Chicago, became associated in the management of the theatre.

McVicker’s Theatre is one of the institutions of the city. It enjoys the reputation of a well conducted, orderly and first-class place of amusement, at which, during the year, are produced in commendable style, the sterling dramas, and all the novelties of the day. During each season all the eminent members of the profession are engaged and appear in succession.

The success of this enterprize has been due to the personal efforts and personal integrity and ability of Mr. McVicker as projector, proprietor, manager, and actor, in all of which respects he has, and continues to enjoy, the unlimited respect and confidence of the people of Chicago, and of his own profession everywhere. 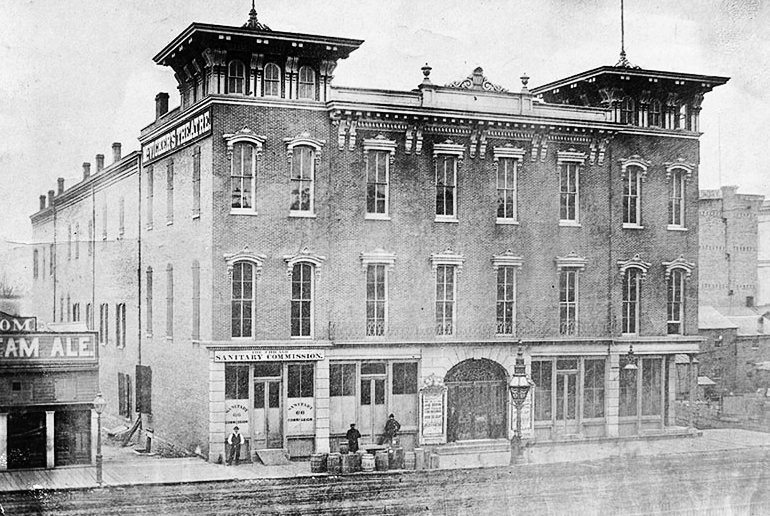 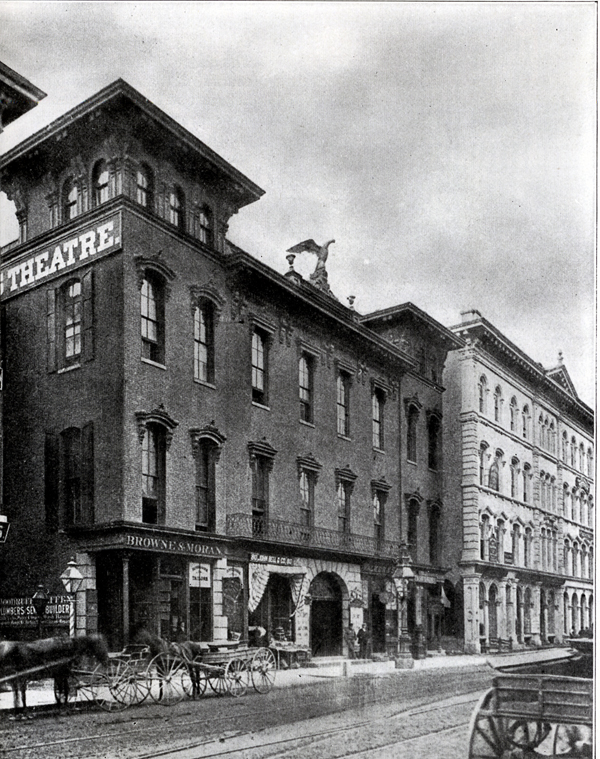 OPENING OF M’VICKER’S THEATRE.
McVicker’s Theatre is finished—at least for the public. Some little touches are yet needed to make the house complete, but these deficits are so slight as not to be apparent to an audience. We have already given a very full description of the new theatre, for the metamorphosis has been so complete as to warrant us in calling it new, and we need therefore at present only speak of general results. 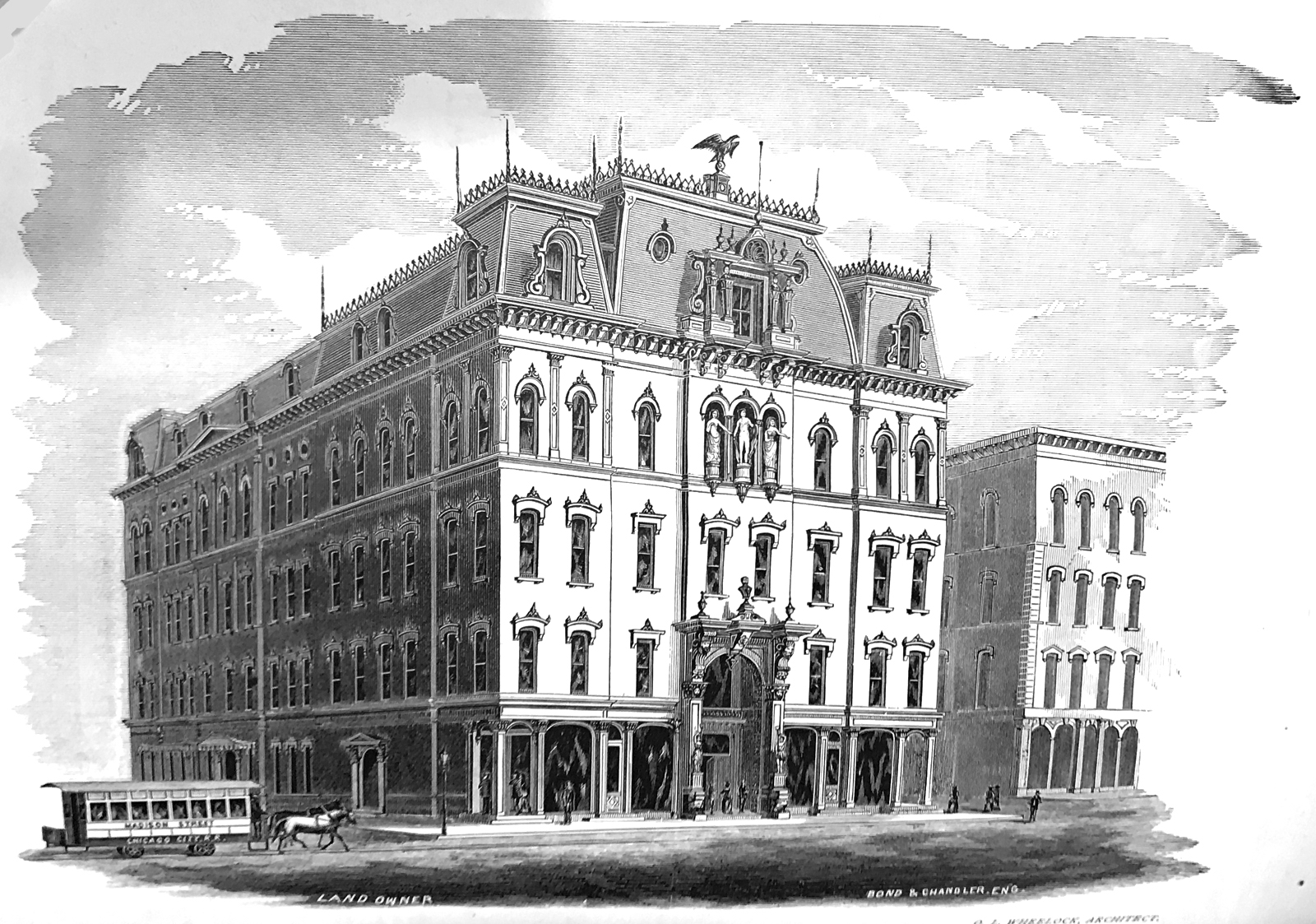 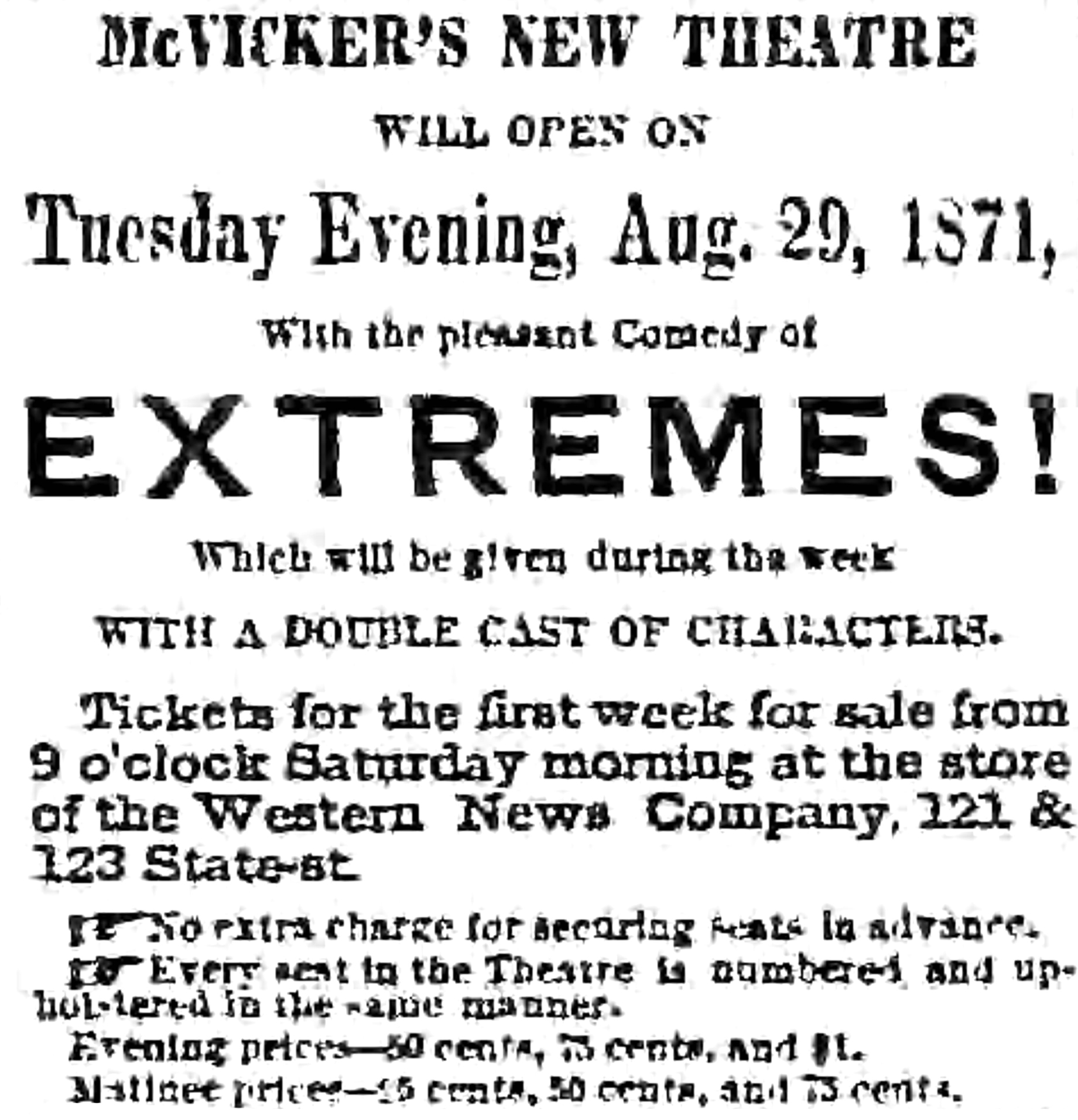 In everything which tends to make a theatre comfortable, convenient, and beautiful, McVicker’s may certainly contest the palm with any in the country. It has been rebuilt in the best of taste—that is, an utter absence of show and gaudiness, and in their place a genuine artistic simplicity, fine harmony of color and effect, and a perfect adaptation of means to ends. The comfort of the audience has been secured by secured which allow of sample room for the sitter in the easiest possible position, by a proper regard to ventilation, acoustics, and light, facility of ingress and egress, and a good sight line from every part of the auditorium. The management has not been partial in administering to the comfort of its patrons. The upper gallery, in every respect, is as good as any portion of the house. It is seated, carpeted, and upholstered in precisely the same manner, has its spacious and elegant lobby, and, as far as vision and acoustics are concerned, is even preferable to the lower part of the house. The minor details of the house are admirably arranged. The lights are so placed that they are not glaring, but, on the other hand, very soft and mellow in their effect. The carpeting and general upholstery has been selected with excellent taste, and with the view of harmonizing with the rest of the theatre. The proscenium boxes, although they are not available for utility, have been made a matter of ornamentation, and, with the mirrors which form their faces, add greatly to the beauty of the auditorium. The frescoing is very chaste, and always grateful to the eye in tone, and the same may be said of the general tints of the walls. As a whole, the building is in admirable keeping with the wants of theatre-goers, and is finally up to the taste of the time. Mr. McVicker, who has given his personal supervision to the work, through every part of it, from the commencement to the end, may congratulate himself, as the public already has, upon having one of the finest little theatres in the country, and that he will be richly repaid for his heavy outlay there can be no doubt. 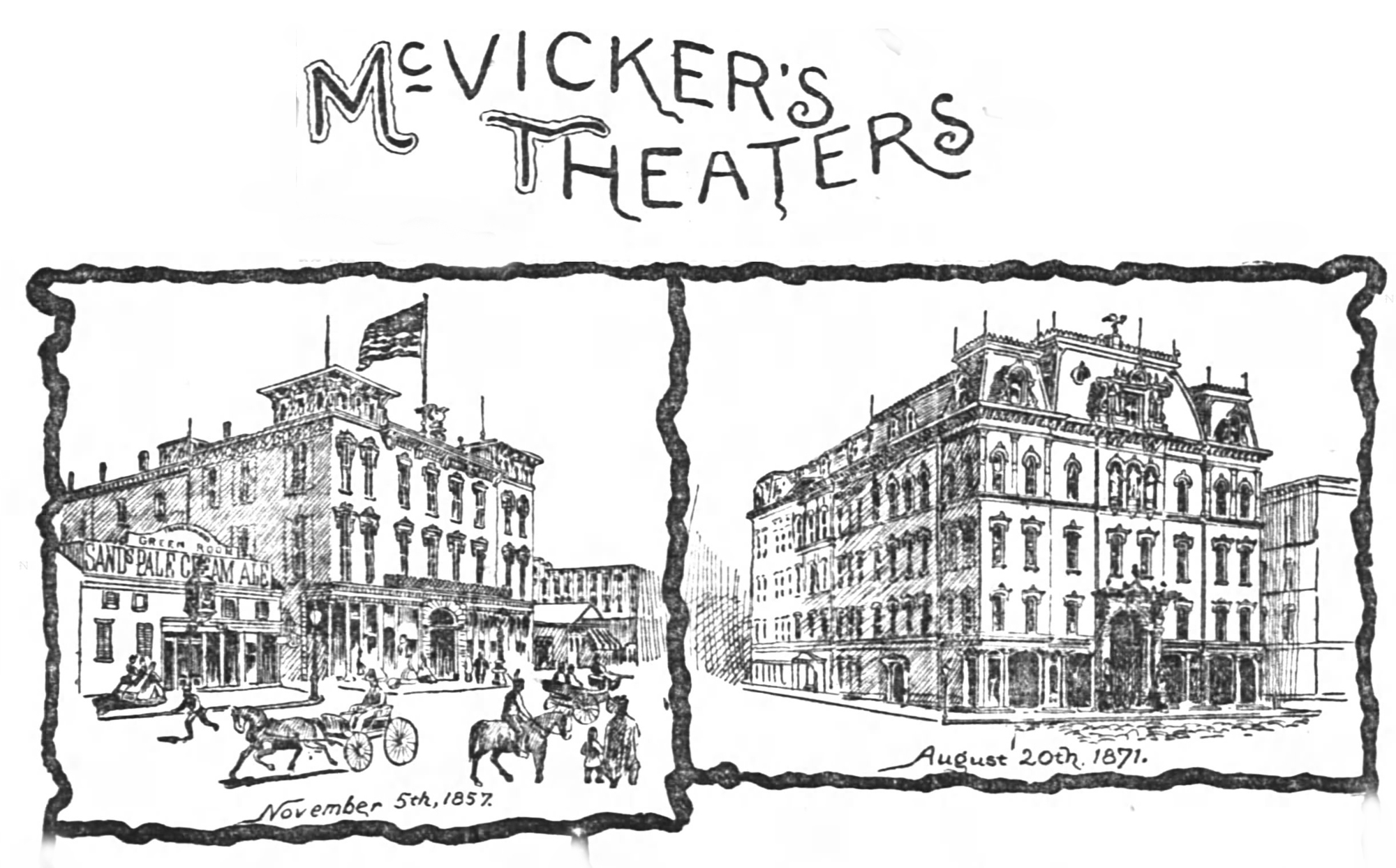 First and Second McVicker’s Theatres as published in the Inter Ocean on August 27, 1890