The first incarnation of the Balaban and Katz Theatre corporation appeared in 1916 in Chicago by A. J. Balaban, Barney Balaban, Sam Katz, and Morris Katz. It held its first meeting as a Delaware corporation on January 21, 1925. Famous Players-Lasky Corporation, forerunner of Paramount Pictures, bought a controlling interest in Balaban and Katz Corporation in 1926. It became a part of United Paramount Theatres in 1948 after Paramount was forced to sell off its theaters. In turn, UPT merged with American Broadcasting Company in 1953. The company was officially dissolved as an Illinois corporation on July 31, 1970. It was reopened on July 13, 2010 as Balaban and Katz Theatres LLC by David Balaban, the grandson of one of the original owners.

When B&K’s Central Park opened, it represented the first mechanically air-cooled theater in the world. Drawing on the experience of Chicago’s meat packing industry with cooling, Barney Balaban convinced the Kroeschell Bros. Ice Machine Company to cool movie house patrons and, in 1921 with the building of the Tivoli and Chicago, to dehumidify them as well. B&K constantly hung icicles from newspaper advertisements; Chicago’s Health Commissioner proclaimed their air purer than that of Pike’s Peak; women in the final trimester of pregnancy were admitted free.

The chart below reflects all of the Chicago area B&K movie palaces as well as the dates the theater was built and when B&K took it over. The close date reflects the last year the building was used as a theater.1

Big Theater for Twelfth Street.
The Twelfth street deal covers the 125×167 feet, north front, 200 feet east of Central Park avenue, seventy-five feet of which was purchased from Abe Pink for a reported consideration of $30,000, and fifty feet from David Rolnick for a reported consideration of $37,000. There are old improvements on the property which were given no value in the transaction.

The properties were acquired by Barney and Abe J. Balaban of the General Feature Film company, and Sam Katz of the Amalgamated Theater corporation. Plans have been prepared by Architects C. W. and George L. Rapp for the erection of a building to cost $275,000, to contain seven stores, fourteen offices, and a theater with a seating capacity of 2,800. In connection with the construction of the proposed building S. W. Strays & Co. have underwritten a 6 per cent serial bond issue loan of $125,000. Seymour Marks was the broker in the transaction and will have charge of the building. 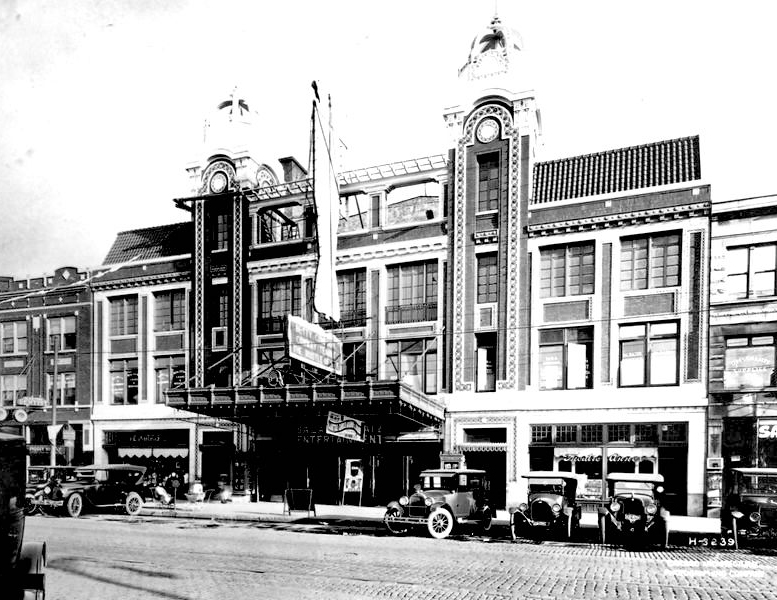 The Central Park theater, without a doubt the most palatial structure devoted to moving pictures in Chicago, if not in the country, opened Saturday night, October 27. This theater is situated at Twelfth street and Central Park avenue, on the West Side, and seats 2,600 persons. The theater and the building was erected by Abe J. and Barney Balaban and Sam and Morris Katz, the architects being C. W. and George L. Rapp, of this city. The theater has been provided with all the up-to-date improvements, equipment and accessories. The best picture programs procurable will be shown at this house, and a fine orchestra and large organ will furnish the accompanying music. 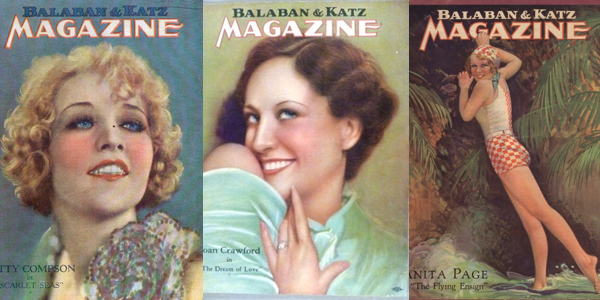 B. and K., Biggest Chicago Chain, Now Seeking To Sew Up Windy City

Chicago—B. and K.’s lightning-like moves are not yet over. Purchase of the Marbro and Granada, bringing to this powerfully-intrenched chain additional strength on the west and north sides of the city, is seen as one move in a series to make Chicago a complete B. and K. stronghold.

It is the north and northwest sides parts of town where the Publix subsidiary operates the Uptown, Norshore, Harding and Riviera and now the Granada, the competition is still considerable. B. and K.’s holdings are the largest in capacity and gross. Competition includes the Sheridan, Terminal and Portage Park, operated by Fox. On the north side are also such theatres as the Howard, independently owned, Ascher Brothers’ Diversey, the Buckingham, Commodore, and several others.

Fortifying In Neighborhoods
B. and K. recognize the situation and proof of it is seen in the designation of ten Lubliner and Trinz houses as “Publix Greater Talkie Theatres,” six of them in those two zones, in what is construed as a move to build up the B. and K. prestige in a string of lesser houses.

With the purchase of the Granada and Marbro, B. and K. come into virtually complete control of Chicago’s de luxe houses which, with one or two exceptions, are practically without class competition in their respective neighborhoods.

In the de luxe class there remains in Chicago only three or four high class theatres which, according to those in touch with the situation, are worthy to be considered as future possibilities for the B. and K. fold. Whether B. and K. has ambition to add these houses to their chain, can not be foretold, but is talked about. Even without these houses the strategic position which B. & K. occupies in various parts of the city is very formidable.

Weakest On South Side
On the south side, and this appears to be B. & K.’s weakest spot, the company boasts four de luxe houses. They are the Tivoli, Tower, Maryland and the Regal. The latter is a deluxe house in the negro district having the largest main floor seating capacity in the country. B. & K.’s outstanding opposition on the south side consists of three National Theatres houses, the Avalon, Capitol and the Stratford. The former two the first atmospheric theaters in Chicago, did a sensational business for many years, making drastic inroads on B. and K.’s Tivoli. At the present time, however, these three theatres along with the others in the National Playhouses, Inc., chain are in the hands of receivers, although still doing good business.

What might be designated as the only other de luxe house on the south side is Schoenstadt’s Piccadilly, which under the careful guidance of the Sehoenstadt Brothers, and because of its strategic location appears to be prospering.

B. and K.’s chief competition on the south side may safely be said to be represented by a number of smaller theatres, such as the West Englewood, Grove, Highland, Cosmo, Jeffery, R.K.O. Englewood, Kenwood, Shore, Chelton, Jackson Park and Harvard. In the group of theatres represented by the latter type B. and K. are conspicuous by their absence.

Powerful On West Side
On what may roughly be designated as the West Side, B. and K. have unquestionably eliminated their strongest competition in the purchase of the Marbro. The three key B. and K. theatres on the west side are the Paradise, Senate, and Central Park. These with the Marbro rate as deluxe houses, and in this district these theatres are without competition from the standpoint of size, beauty and comfort.

Almost the same situation exists on the West side as does on the south side in that B. and K.’s competition takes the form primarily of lesser houses. Outstanding in this group are the houses recently acquired by Essaness Theatres, which organization under the direction of S. M. Spiegel, and E. Silverman has ambitious plans under way to become an important factor in the Chicago neighborhood house situation.

The move which gives the Publix B. and K. name to the old L. and T. houses makes the State at 5814 W. Madison St. the only competition furnished by B. and K. among the smaller houses.

Chicago’s loop district, is essentially B. and K. Aside from the grind houses the only theatres not controlled are the Orpheum, which is operated by Warners, the Monroe, liv Fox, the Woods and the State- Lake by RKO and the Castle by C. E. Beck. The largest and finest theatres in Chicago are operated by B. and K. in the loop. These are, the Chicago, Oriental, McVickers, Roosevelt, and United Artists. 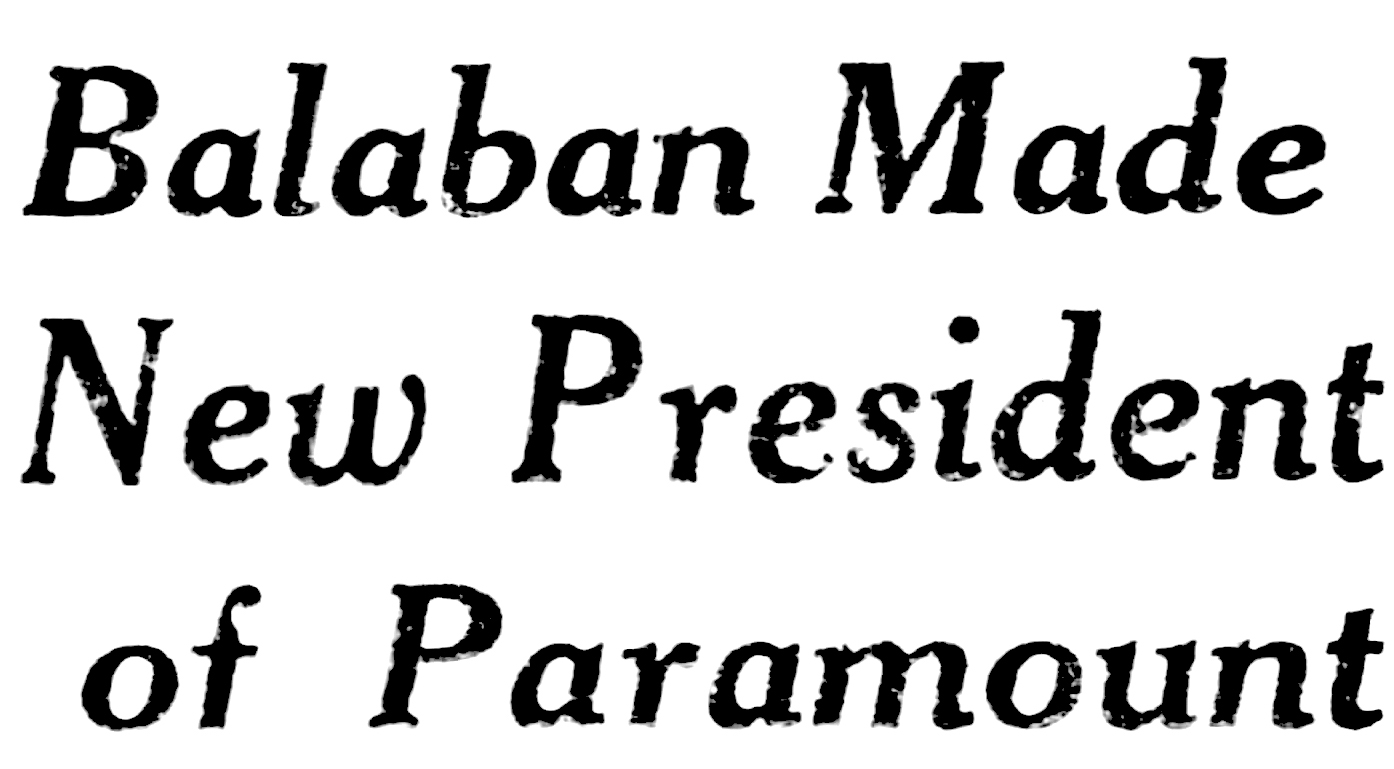 BY HERBERT VEDDER.
Barney Balaban, president and co-founder of the Balaban & Katz corporation in Chicago, was elected president of Paramount Pictures, Inc., yesterday at a special meeting of the Paramount directors in New York. He succeeds John E. Otterson, who was from the board in a shakeup two weeks ago when Balaban became a director.

In the motion picture business since 1908, when he and four brothers pooled their interests, Barney Balaban is credited with being the originator of refrigeration and air conditioning equipment for theaters, a development which revolutionized summer patronage.

Born on Chicago’s West Side.
The new Paramount president was born on Chicago’s west side in 1887, the son of a small grocery store operator. At 12 years of age, he left school to become an office boy in qa hotel grocery shop. A few years later he went to work for Western Cold Storage company in Chicago. It was this experience which led to the idea of cooling motion picture houses during the warm months.

It was not until the Famous Players-Lasky corporation (now Paramount) purchased two-thirds of the common stock of Balaban & Katz that he gained any substantial interests outside of that theater chain and its distributing agencies. He first entered Paramount affairs actively in 1932 as a member of stockholders’ protective committee and has been one of its most substantial shareholders in recent years. Paramount now owns practically all of the Balaban & Katz stock.

Build Chain in Chicago.
The first movie venture of the Balabans was in the Kedzie theater. They built the Circle theater in 1913. It was the first Chicago film house with a balcony.

About 1915, Barney Balaban met Sam Katz and the two men made plans for a group of de luxe theaters. Their first theater, the Central Park, was opened in 1917. It was the first theater with modern air conditioning. There followed the building of the Riviera, Tivoli, Chicago, and Uptown—the nucleus of a circuit now operating 38 theaters in Chicago and 57 in the rest of Illinois through Great States Theater corporation. The theater operations were consolidated into the Balaban & Katz corporation in 1923.

Zukor Reelected Chairman.
At the meeting yesterday in New York, Adolph Zukor, founder of Paramount, was elected chairman of the board. He will be in charge of production in the Hollywood studios, where he assumed control two months ago.

No announcement was made as to what will be done with Otterson’s contract with Paramount, which has four years to run nor how much will be paid J. P. Kennedy for his survey of the organization. 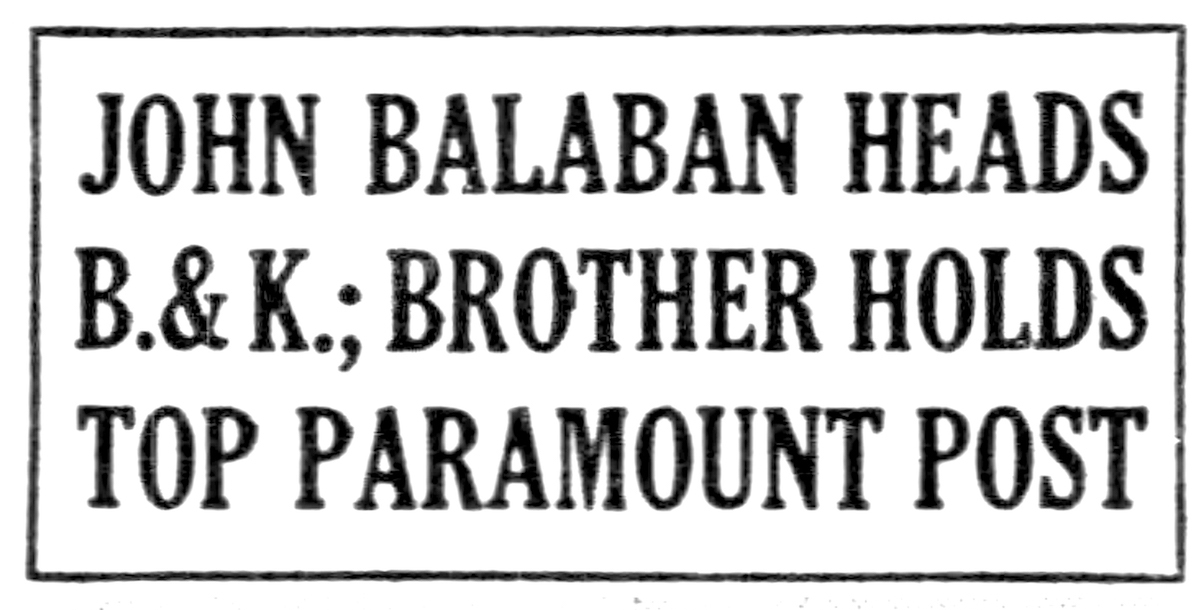 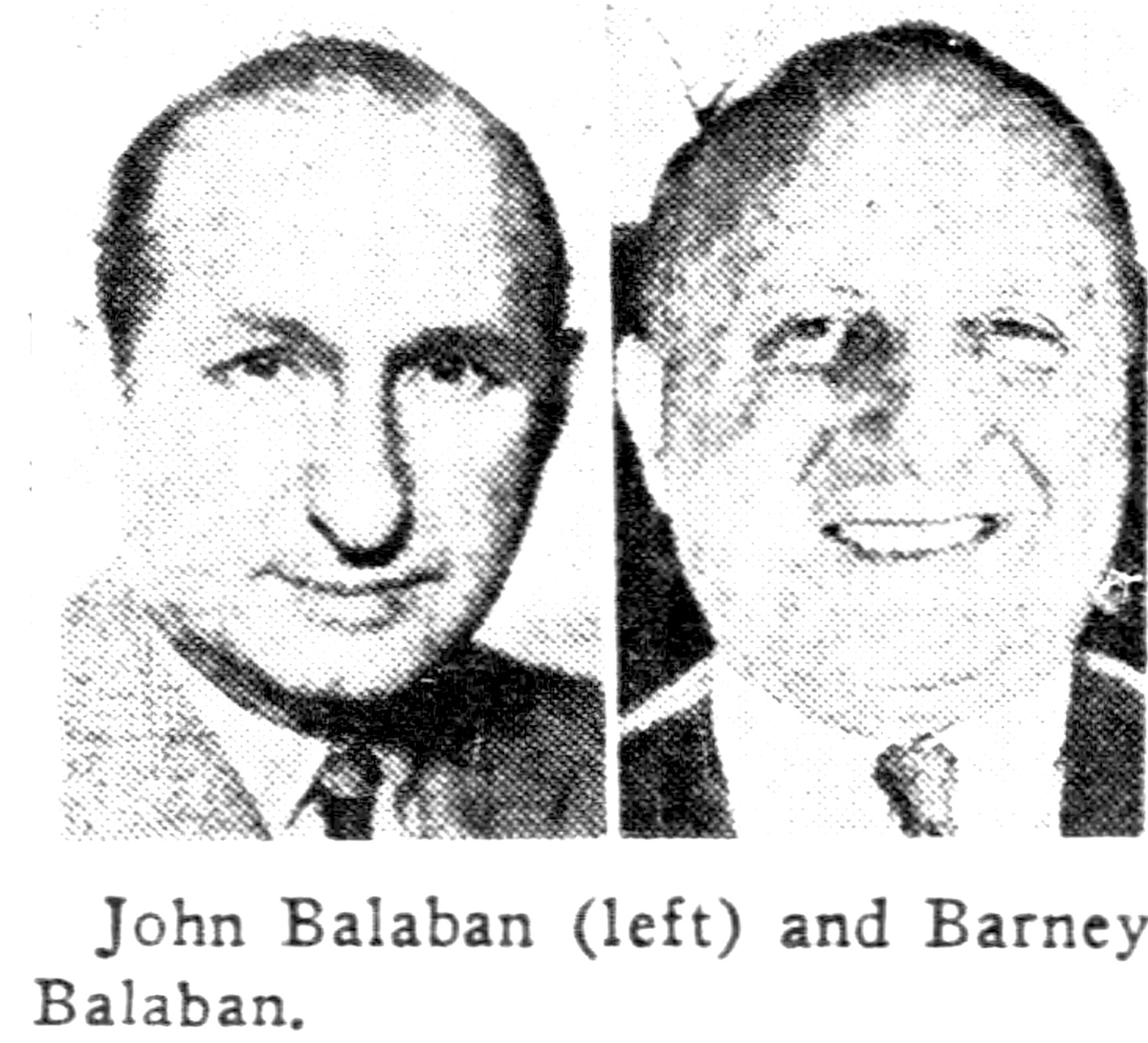 John Balaban was elected president of Balaban & Katz corporation yesterday to succeed his brother, Barney Balaban, who had been the president since the company’s inception. Barney Balaban remains president of Paramount Pictures, Inc., which becomes a separate company as a result of a federal decree separating production and distribution from the theater group. 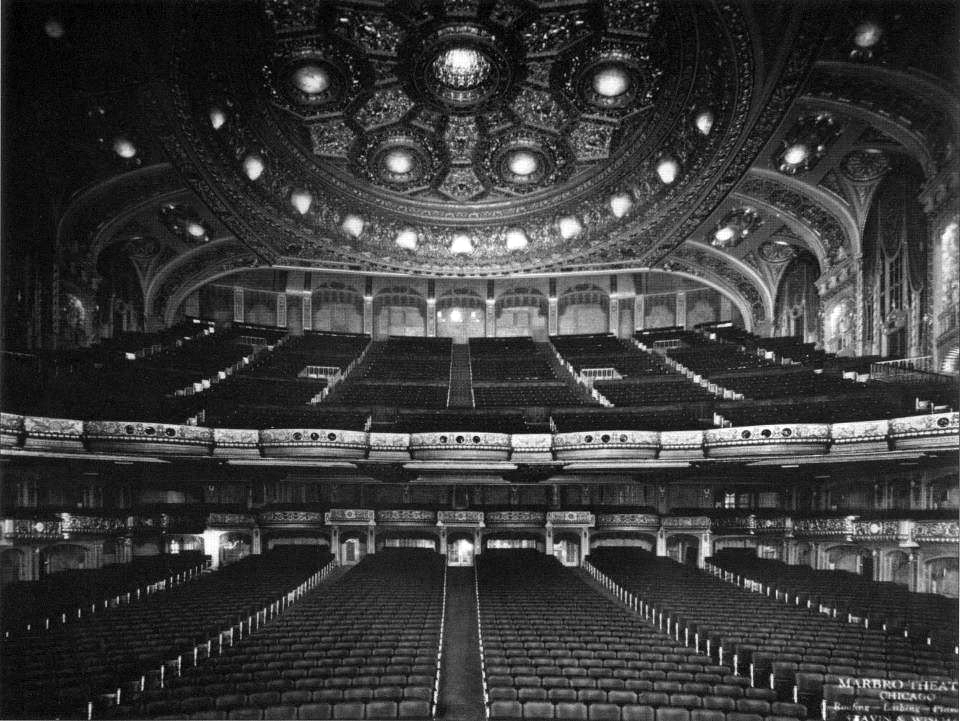 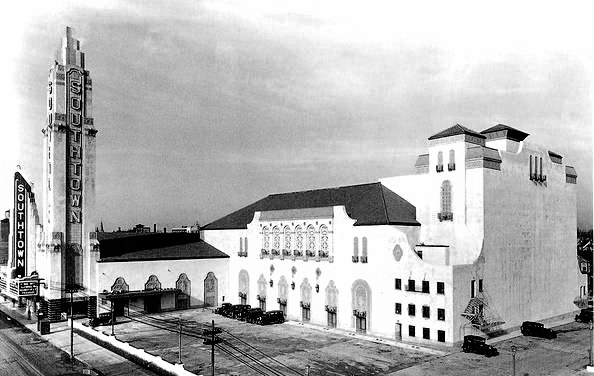 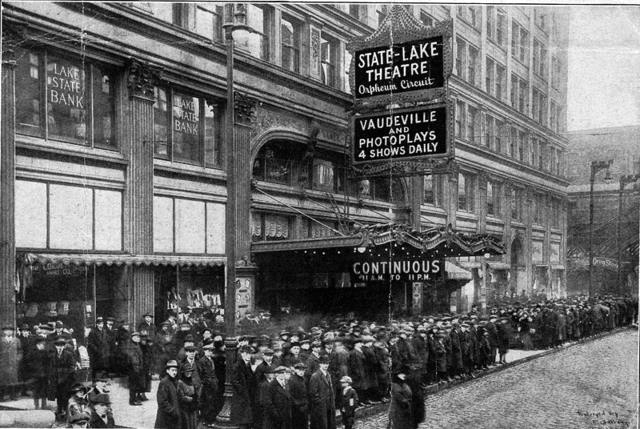 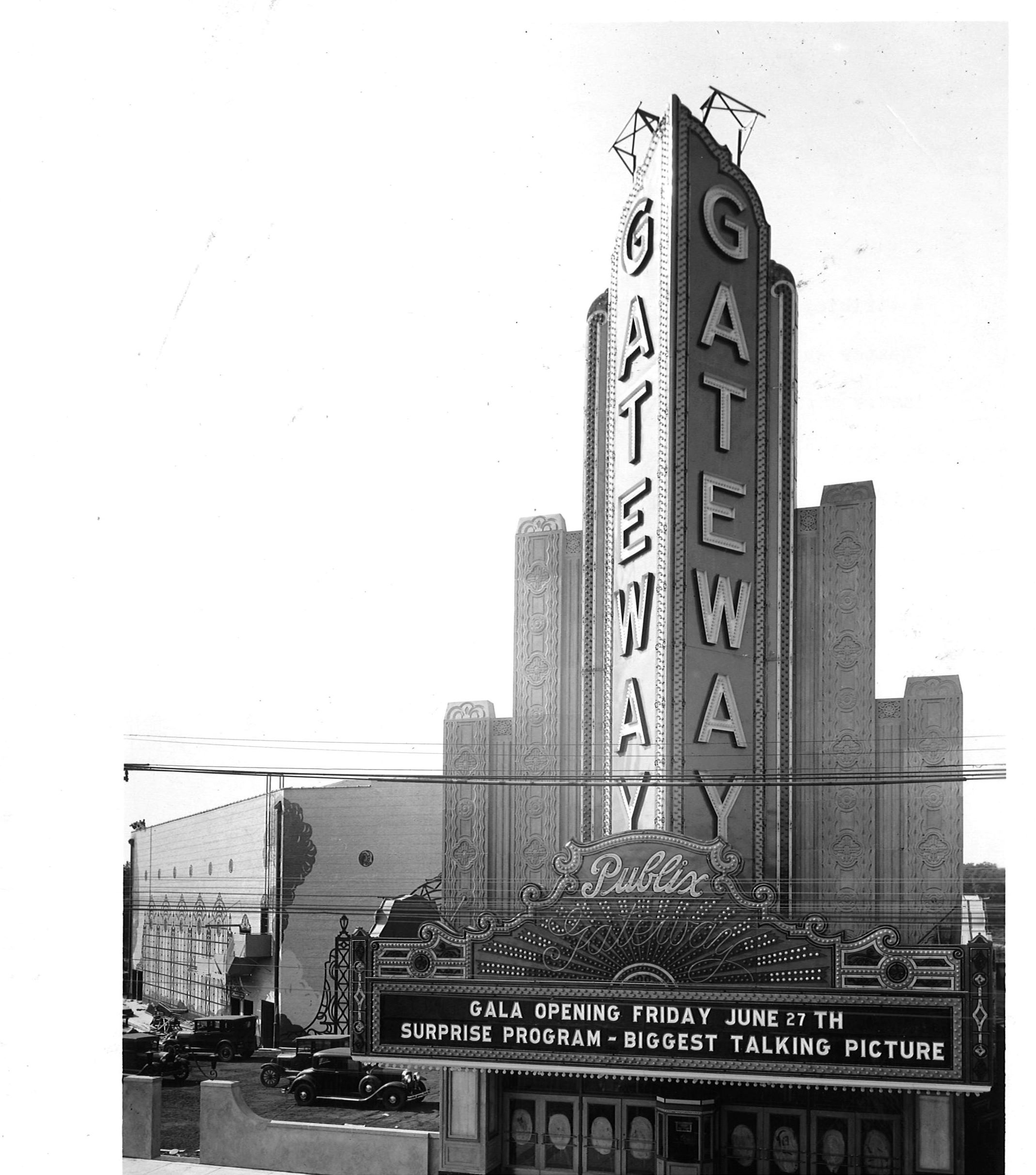 Gateway Theater on Opening Day, 27 June 1930
One of the first theaters engineered for sound 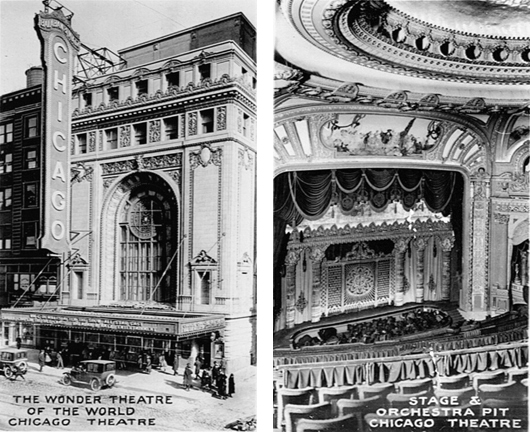 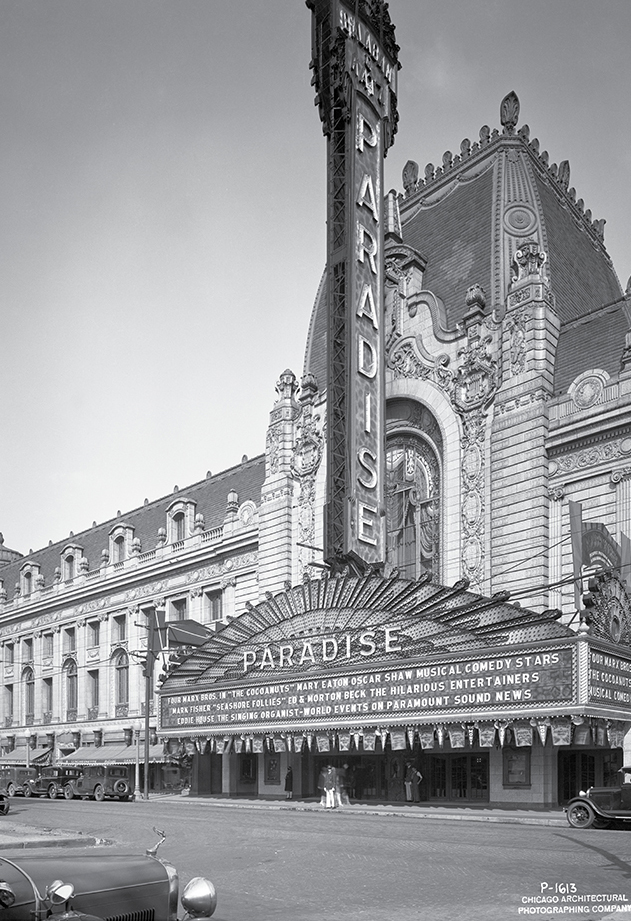 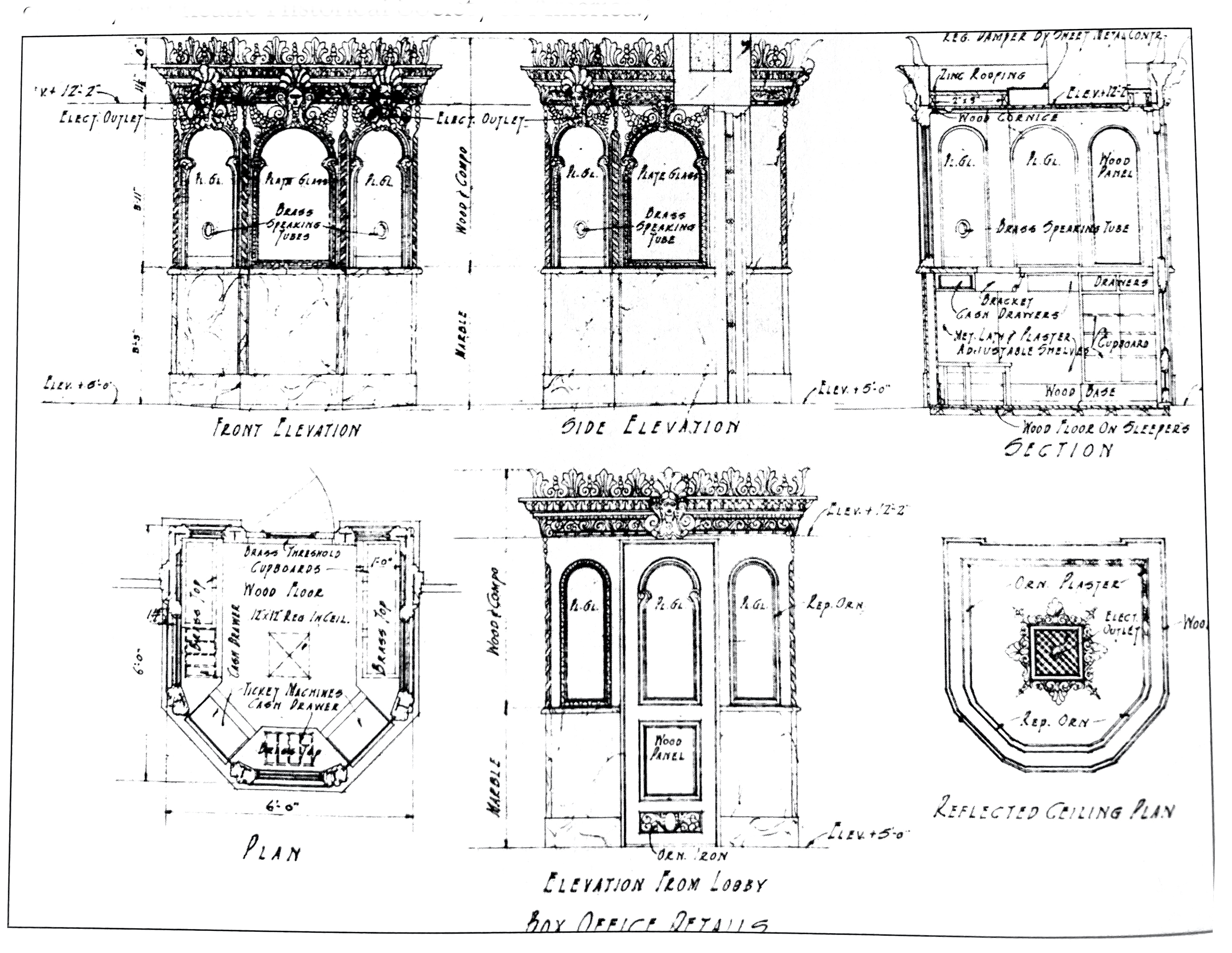 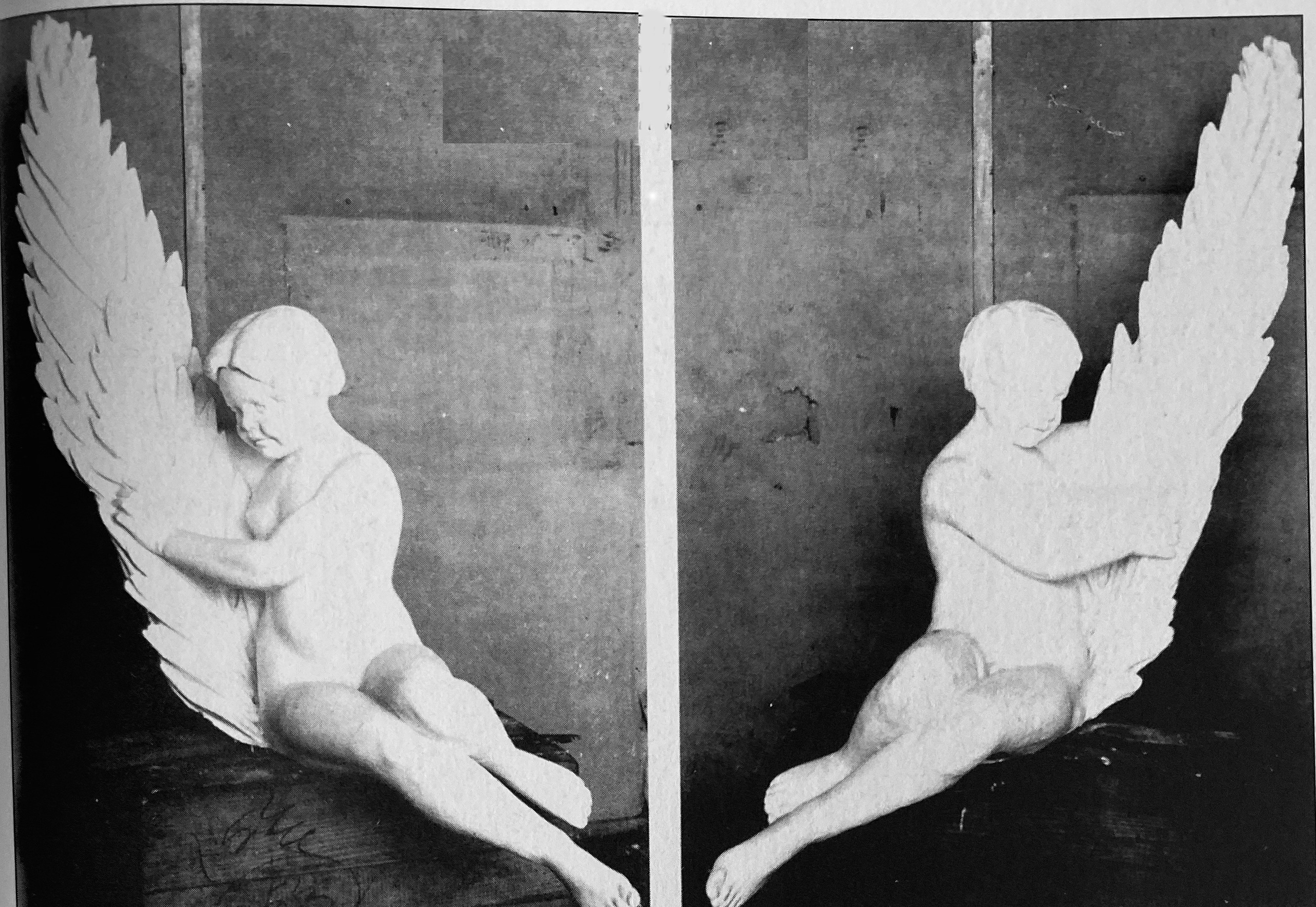 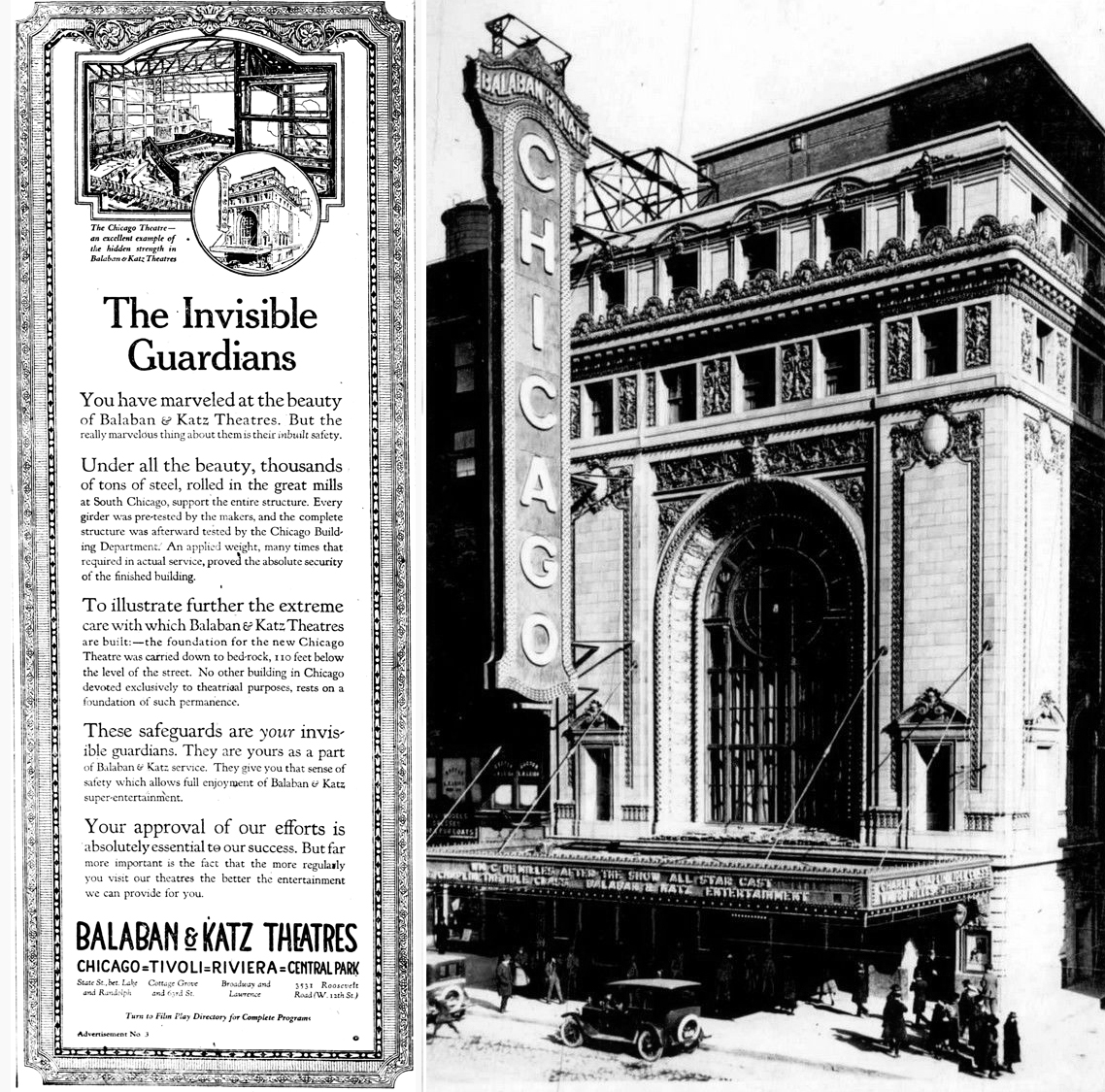 NOTES:
1 According to Balaban & Katz Official Theater Manual, 1934.
2The Oriental Theater is at the same site as the Iroquois Theater. The basement of the Iroquois is still intact under the Oriental.