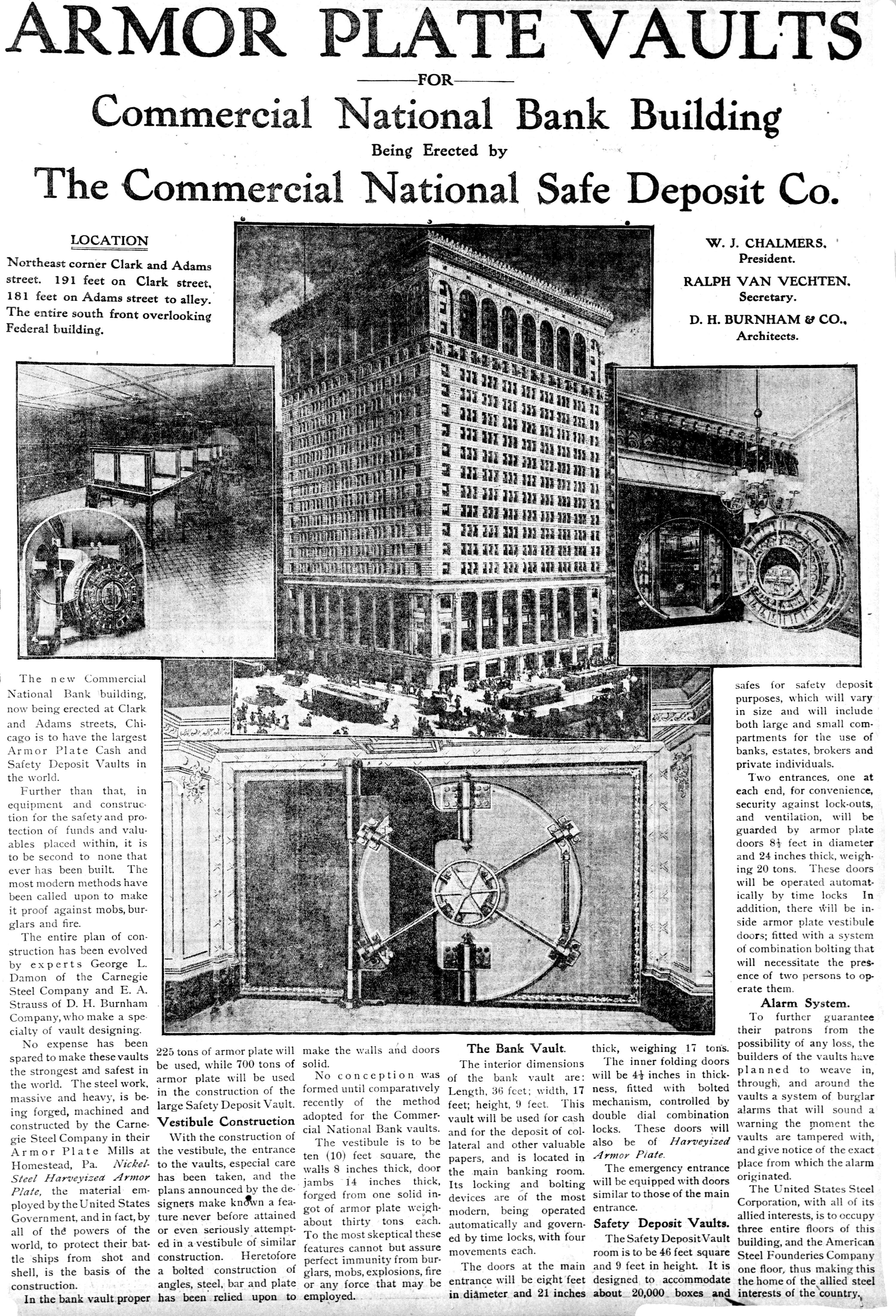 Announcement that the Commonwealth Edison Company will occupy what is now known as the Commercial National Bank building after May 1, 1914, is incorporated in a little book just published, “The Building of Modern Commerce.”

The pamphlet in its lyric conception of the history of commerce, swinging down through the centuries from the trailing caravan of 6,000 years before Christ to the crescendo of structural development in the last twenty years in Chicago, should make a poet of every business man. He should find himself full of color and the martial music of the march of commerce as he looks at the penciled sketches of the State street of the forties, which had so bravely lifted itself out of the mud, and at the cathedral-like interior of what is now to be known as the Edison building, or the color rint of of Randolph street by night—as gorgeous a pageant as any Rome ever knew. The Edison building is to be remodeled and its nineteen stories equipped with every device in the van of electrical invention. Curiously, the building stands practically on the site where the first electric power station was erected in 1887. 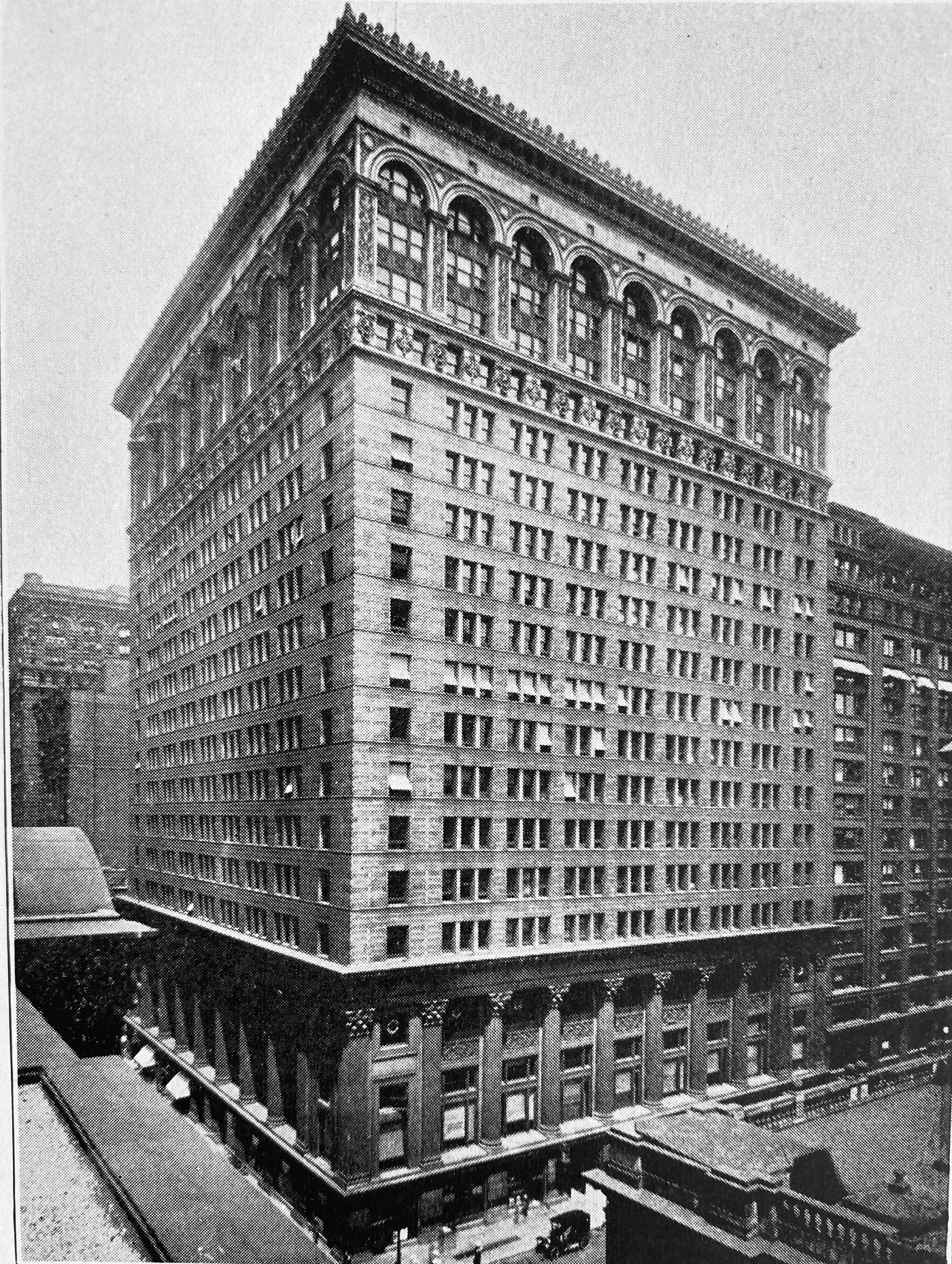 The Edison Building, located at 139 Adams street, although of modest proportions, is notable as the financial, engineering, and operating headquarters and general public offices of the greatest electricity supply enterprise in the west, the Commonwealth Edison Company of Chicago. This company’s great power houses at Fisk and Quarry streets and the Chicago river are the source of some 590,000,000 Kilowatt-hours of energy per year, equal to 666 2-3 millions of horsepower hours.

This vast amount of electricity is used for operating local surface and elevated railroads, and for industrial power, electric Ught. and electric heating and electro-chemical applications of a thousand varieties. The service extends through the systems of Wholesale customers. to Milwaukee on tho north, Elmhurst and Kankakee on the west and south, and into Indiana On the southwest. Through a private telephone system centering in the load dispatcher’s office in the Edison building, that official directs every switching operation of the entire system of generator and battery connections, substations, feeders, transmission lines, and public mains.

The Edison Building is 19 stories in height of the very best steel construction; interior finish is of mahogany and marble. The 15 elevators are of the latest type of one to one Electric Traction; thus making them the safest and smoothest running elevators possible. They are mechanically started, and their travel is governed by an automatic recording machine, so that all floors of the building receive uniform and efficient
service.

The Commonwealth Edison Company occupies several floors of the building. As an electrical building, it is equipped throughout with every electrical convenience, and facilities are arranged for the use by tenants of the many electrical office appliances, which are a necessity for the efficient operation of business.

The building is situated exactly in the centre of the loop in the main current of business movement, close to the banking and trade centres. It is in brief “The Building of Modern Commerce.” 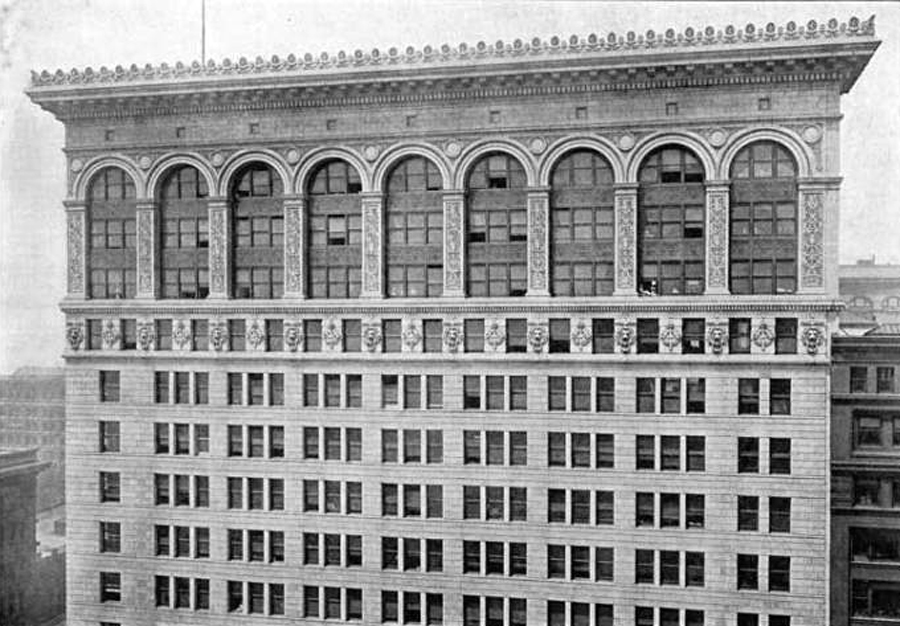 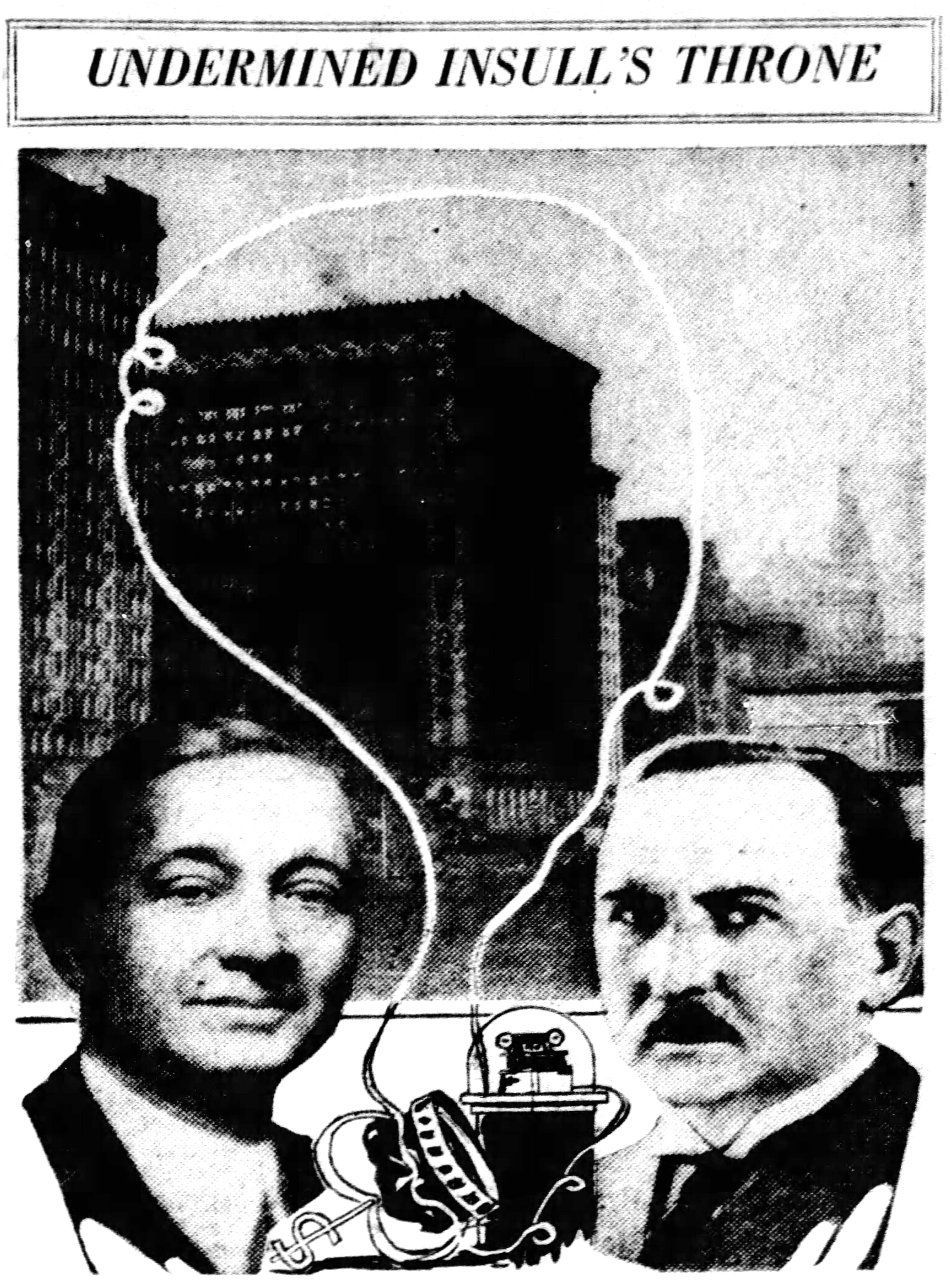 A view of the Commonwealth Edison Building, Chicago, which was the throne occupied by Samuel Insull when he ruled a vast utilities empire, and from which he was toppled by financial coup of Cyrus A. Eaton, (left) Cleveland financier, who acquired control of an Insull company and sold it back at his own price, and S. Z. Mitchell (right), whose activities as head of Electric Bond and Share Co., drove Insull to erect the financial pyramid that toppled and buried him. 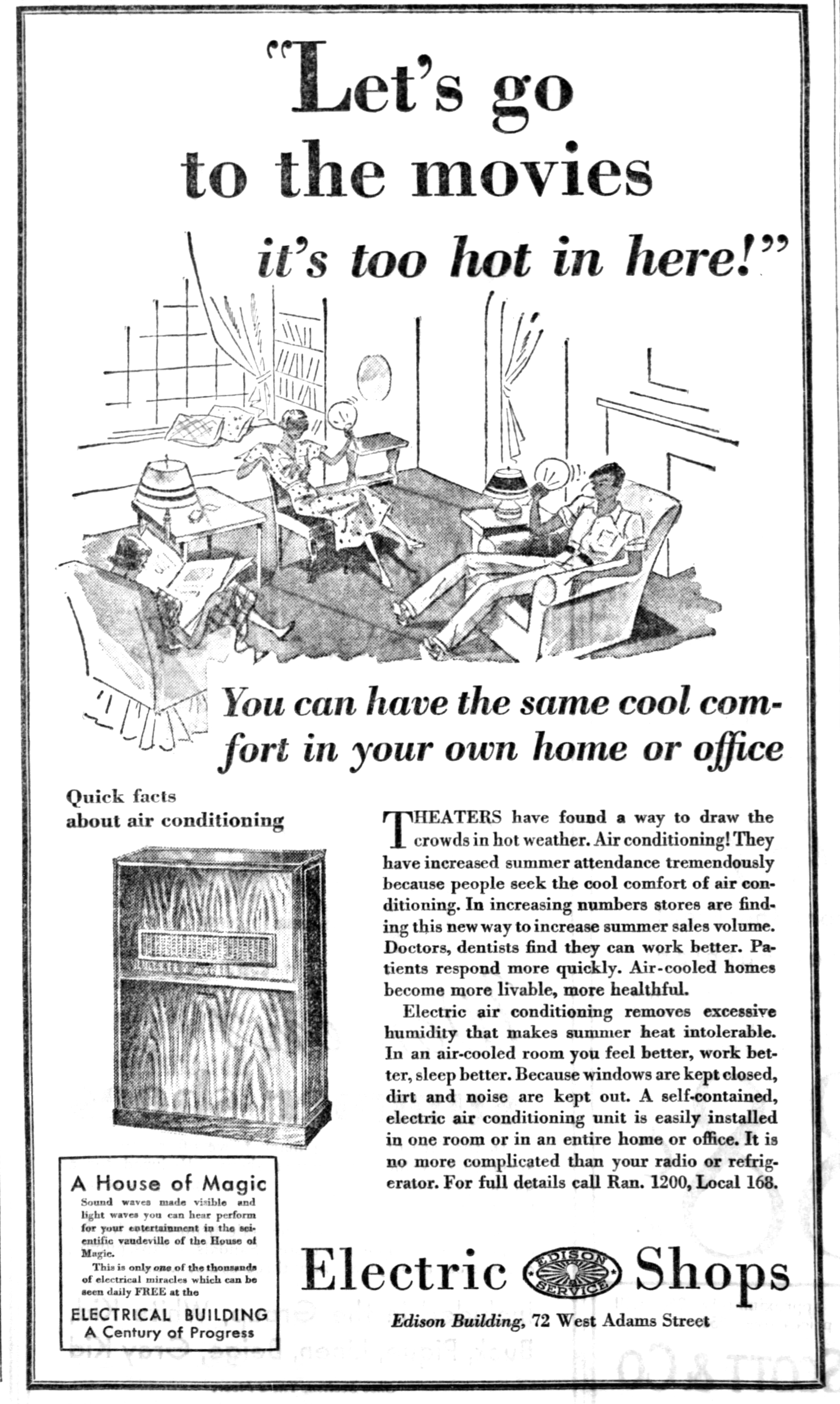 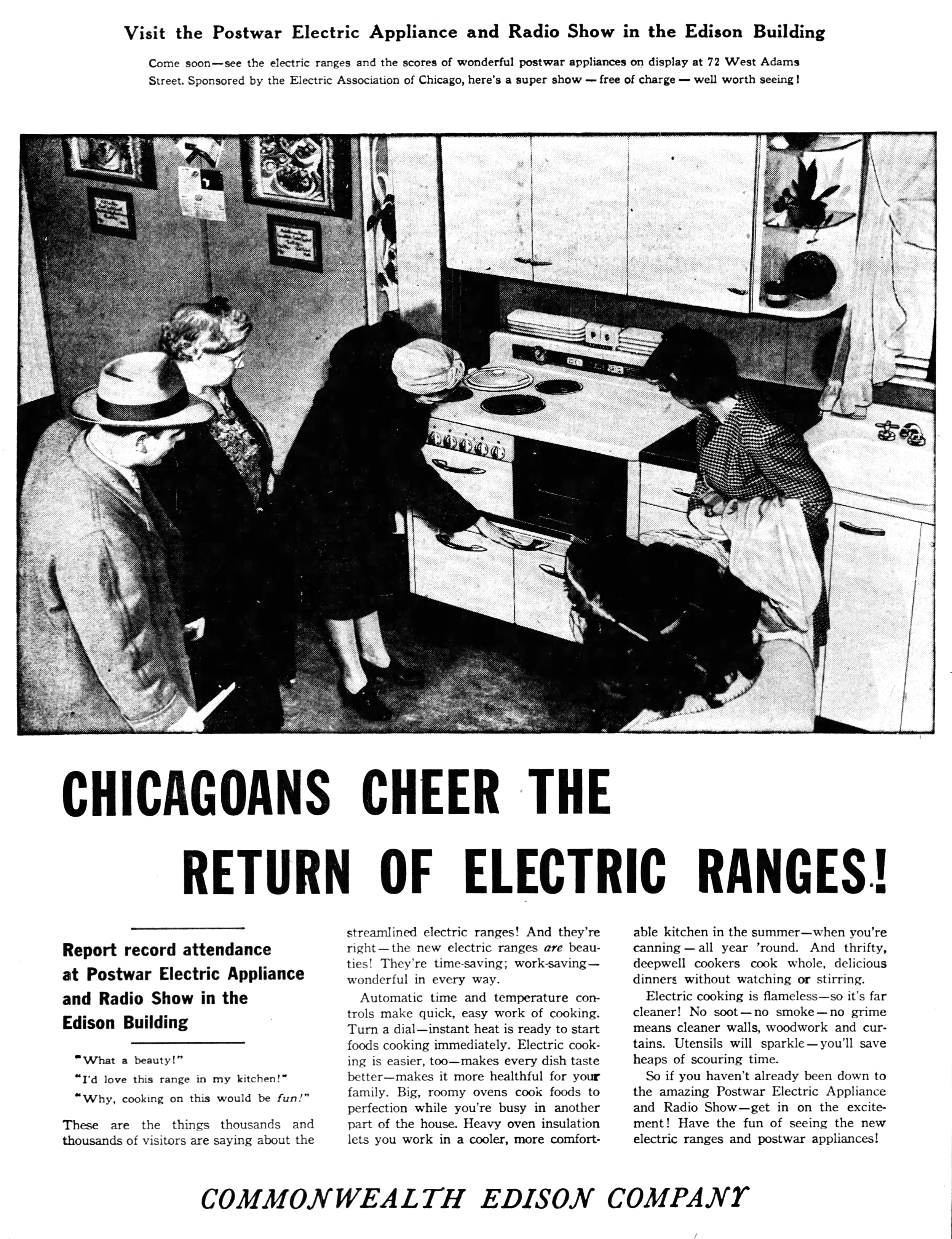 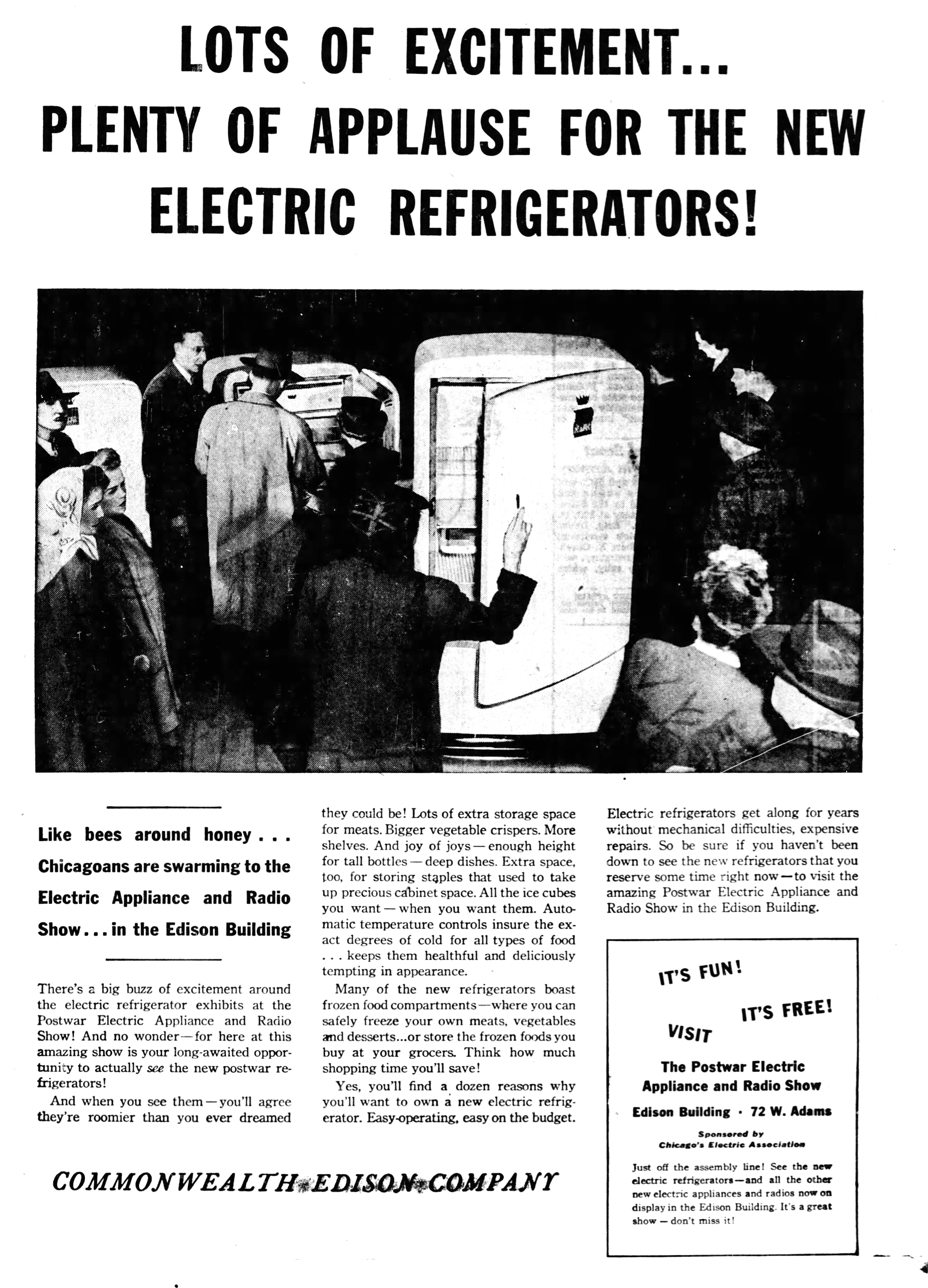 All the stories of the Civic Opera House being designed to look like a throne are fabrications because of the seemingly chair-like design. These fabrications tried to associate the term “Insull’s Throne” to the design. In reality, “Insull’s Throne” was a reference to the Edison Building where Insull ran his Napoleonic empire from. The Opera House design was driven by economics and air circulation.

One of the romantic stories about prominent Chicago buildings is that the Civic Opera Building, now called the Kemper Insurance Building, 20 N. Wacker Dr., was designed like a throne in which, imaginatively, Samuel Insull, the developer, could sit and view the westward horizon of the city.

The congenial, white-haired man rattled off a story which showed that the hard realities come before flights of fancy with design.

Noonan, who started with the firm in 1924, said the first concept was of a square building, not tall. But the architects faced two problems: hiw to ventilate the large interior spaces and how to provide enough commercial areas to make it an economic success.

The architects had a running battle with leasing agents that reached a crescendo when the agents wanted to convert a proposed first aid station into a candy store.

Noonan remembers Ernst Graham, one of the partners, shouting back:
Do you know how many babies are born in the Marshall Feld (& Co.) store? Do you want that to happening in this building?

It was a successful ploy altho Graham would have been dumbfiunded if he had been challenges to give a total of store-born babies.

Graham is known to be a promoter for the firm. “He started out as a bricklayer and he could really put the pieces together for a building,” Noonan said. The other partners had skills in areas which made it a highly successful team.

Noonan said that one day, when they were wrestling with the design of the building “Graham burst in with a full head of steam and said he knew how to solve the problems. ‘We’re going to build up.'”

This created what looks like the back of a high chair or throne.

He tells a little known story about the Field building (1933), now called the La Salle National Building, 135 S. La Salle St. He drew the original sketches for the office building.

Early in the planning of the building there was a proposal to consolidate the Field property, the Borland Building, Harris Trust and Savinh=gs bank, and property owned by Samuel Insull and create one structure on the entire block bounded by Adams, Monroe, Clark, and La Salle Streets.

But when the discussion got around to the name of the proposed huge office and bank building the talks suddenly ended. Apparently the other parties didn’t want to lose their identity in a “Field” building, he said.

“At one time we were the C. F. Murphy (Associates) of the city,” Probst said. (The Murphy firm is one of the most active downtow,) “Maybe, the cycle is turning around again.”