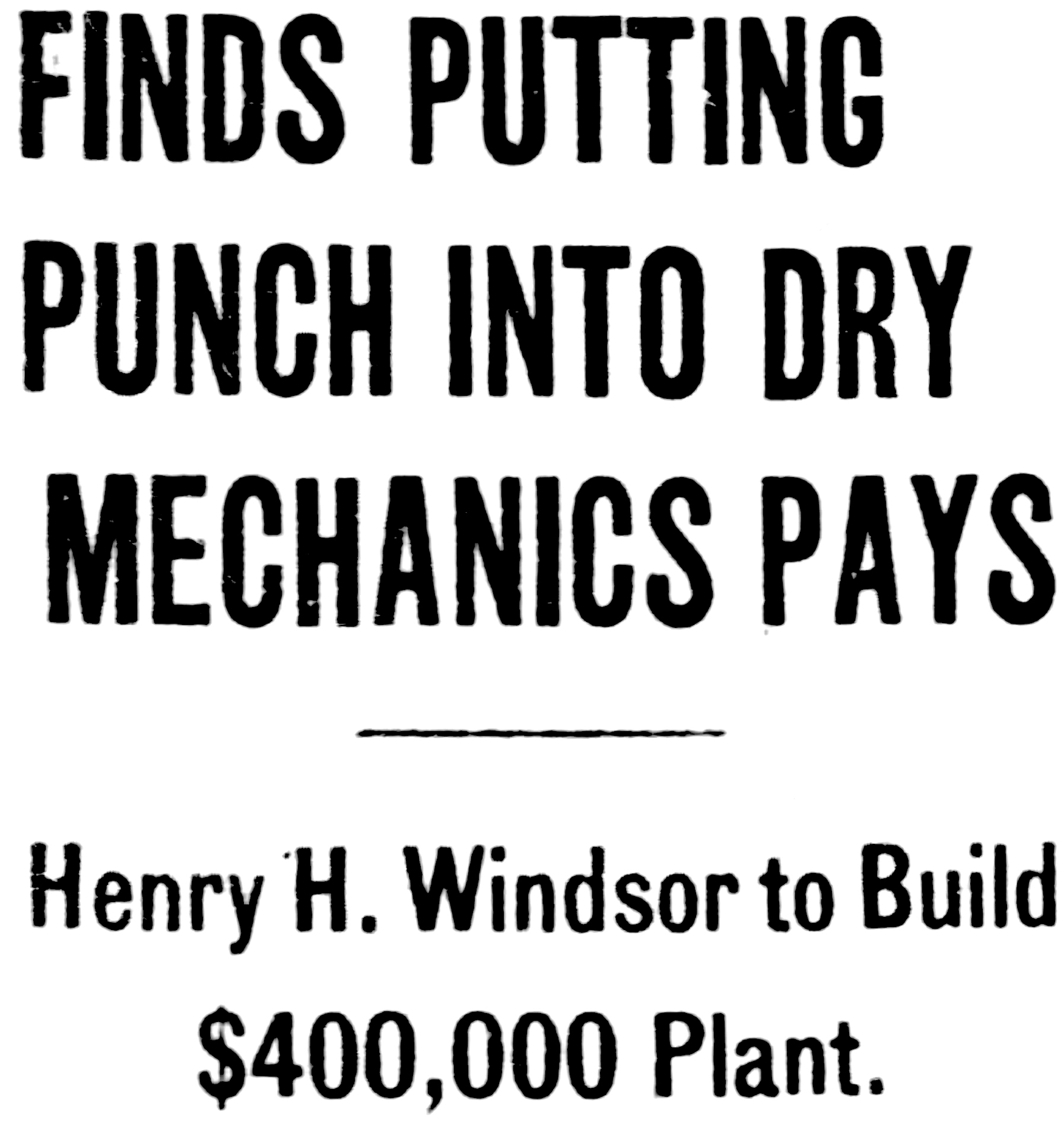 BY AL CHASE.
For several years previous to 1901 Henry H. Windsor of Evanston edited serious, solemn, scientific journals which only the tall browed could fathom. All that time he kept himself at his work with this thought:

Every kid likes scientific stuff of it’s written so he can understand it. Some day I’m going to give the American youngster such a magazine.

Them in 1901 he founded Popular Mechanics with, of course, no circulation to start with. Without and $200,000 “laugh labels” or any of the modern circulation stunts, without even solicitors, he has built it up 500,000 monthly. And 92 per cent of this is sold on newsstands.

Sleeps in Peace.
“I’m the only magazine owner in America who goes to bed without worrying whether his circulation will be the same when he gets up,” chuckled Mr. Windsor. “It’s growing about 25,000 a year and practically every new reader sticks.

And by the way, I’m the first one to make a Chicago magazine pay. There’s a lot of ’em paying now, but there wasn’t one when I started. There’s no question that Chicago will soon be the great magazine publishing center of the world.”

Mr. Windsor also publishes Wayside Tales, with which is combined Cartoons. His son, Henry H. Jr., is editor of this.

Pays $100,000 for site.
Yesterday the Popular Mechanics company, of which Mr. Windsor is president, bought 118×125 at the northeast corner of Ontario and St, Clair for $100,000 cash, and will build at once one of the finest magazine plants in the world to cost $400,000 and to be seven stories. Marshall & Fox are architects. The buyer will use the entore building.

Henry W. Gossard, the seller, bought this property two years ago through the brokers in the Windsor deal, Edein J. Bowes Jr. & Co., for $65,000. 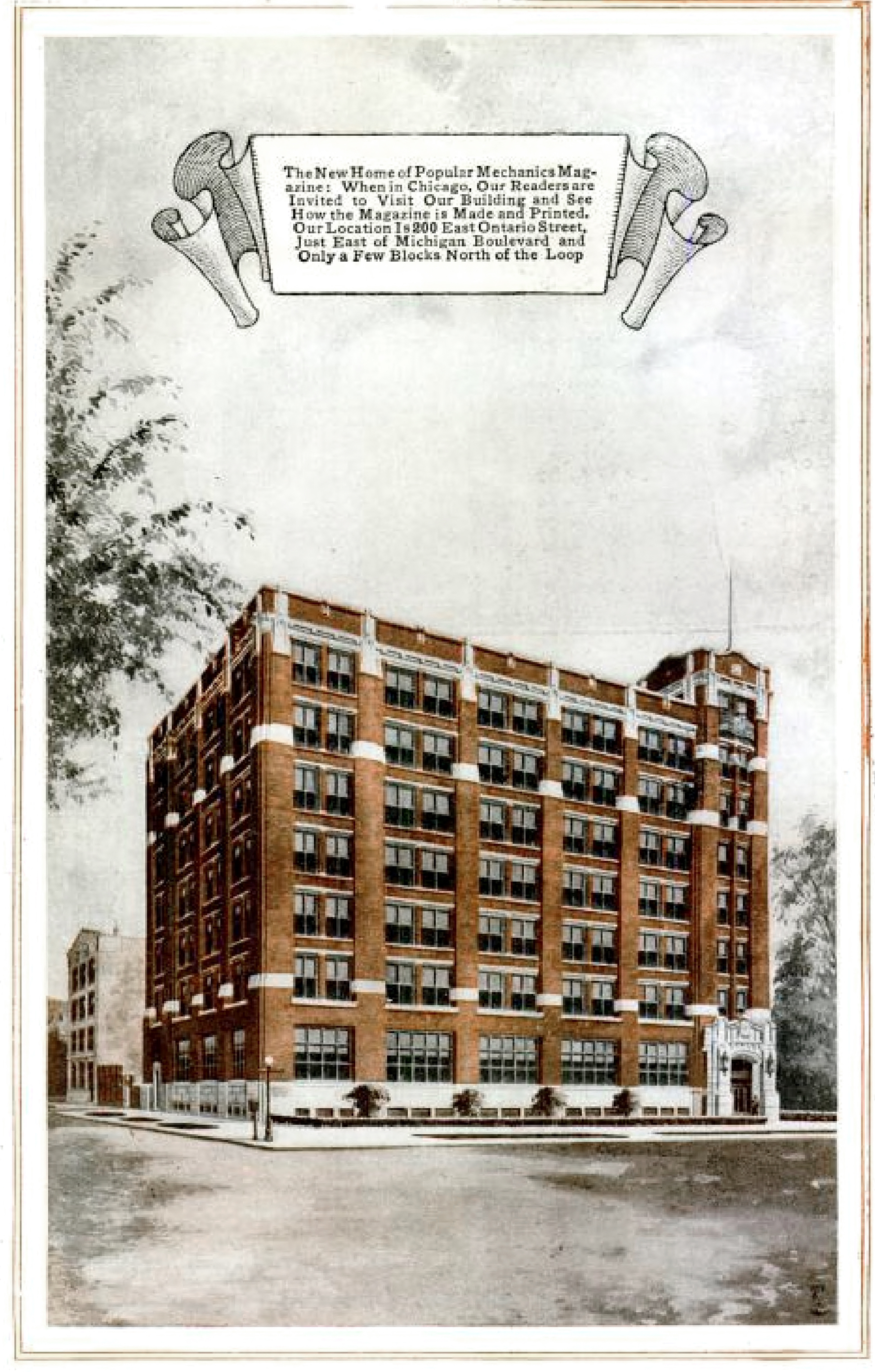 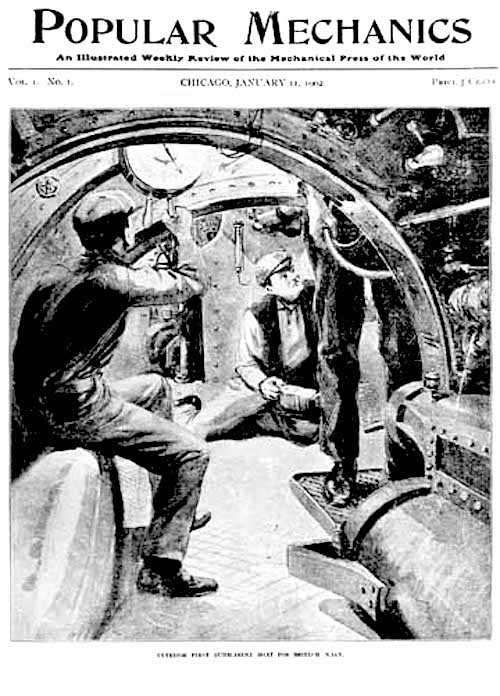 BY H. H. WINDSOR
IN occupying our new building and issuing the first copies from it, we have thought some of our readers would be interested in a few words as to how the magazine was originated and its development.

The first copy of Popular Mechanics was issued January, 1902, from one small room, by its founder and present editor. The idea had been developing in his mind for five years, suggested by reading a large number of other technical and cIass publications while publishing some of his own. He realized the enormous number of articles of a highly interesting and instructive character, including science, mechanics, engineering, industry, and discovery, which were expressed in technical terms that the layman could not understand, and limited to the comparatively small circulation of such publications in those days.

The Popular Mechanics idea was to secure this information at first hand and at the earliest possible moment, and concisely tell the story of these events in language “written so you can understand it;” the “you” meaning everybody in all professions, industries, and occupations.

The first copies contained 16 pages in the form of a weekly, which two years later was changed to its present monthly magazine size. From the first it was liberally illustrated, although at that time few publications indulged in many pictures.

A long-time policy is an absolute independence of the editorial and advertising departments. Readers frequently inquire why the name of the inventor or manufacturer of something described is almost never printed. It is to avoid even the appearance of advertising in the editorial pages.

This first small room, however, was soon outgrown, and from that day to this, the space required in which to produce the magazine has been steadily increased, until its present seven story home became necessary in order to properly produce the publication. 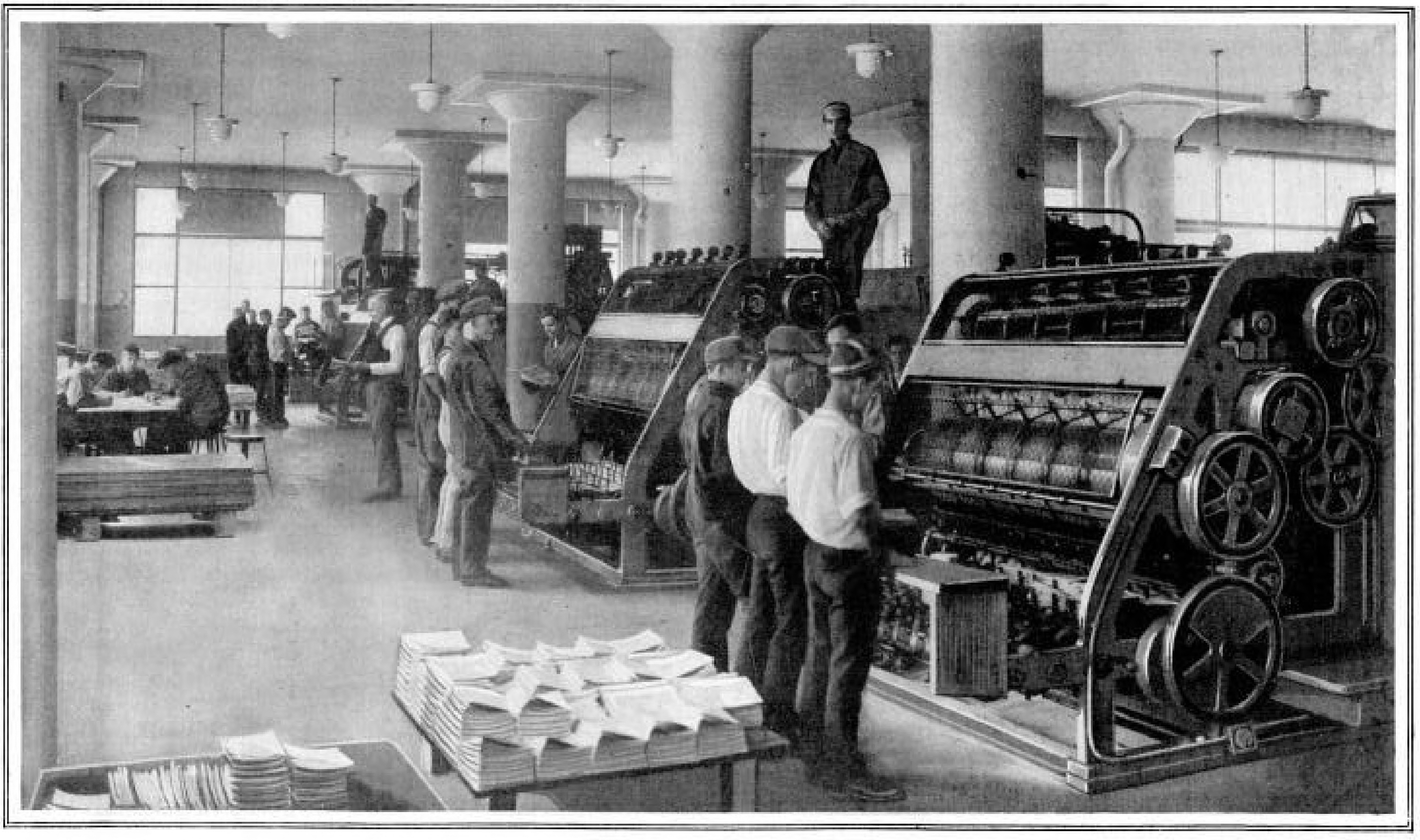 View of the Popular Mechanics Pressroom with the Big Rotaries at Work: The Room Has a Floor Space of 10,000 Square Feet. and Every Corner of It is as Light as Day. This Issue is the First Printed in the New Building. Each Press Produces 384,000 Printed Pages per Hour, Folded and Ready for Binding. Which is Equivalent to More than 1,000 Complete Books. All Machinery in the Building is Motor-Driven and under Instant Control by Means of Push Buttons Located at Convenient Intervals.

The Popular Mechanics building occupies 85 by 120 feet, on a lot 120 by 165 feet located on the northeast corner of Ontario and St. Clair streets, Chicago. It is devoted exclusively to our offices and printing plant.

The basement of the building is used as a storage space for paper and provides room for 2,000,000 pounds.

The first floor is used as a pressroom and was built especially for that purpose. The height from floor to ceiling is 15 feet, which allows ample space over the presses. The presses 1;1sed are rotaries.

The second floor contains the bindery where the magazine is assembled after printing, the book stitched, and the cover glued on. This is done entirely by machinery.

The third floor is occupied by the advertising, subscription, and mailing departments. The general reception room is also located on this floor.

LEFT: Office of H. H. Windsor. Editor and Founder of Popular Mechanics Magazine on the Day of the Formal Opening
RIGHT: The Office of the Vice-President. H. H. Windsor. Jr., A1so Taken on the Opening Day: The Eastern End of the Room is Seen in· This View

The fourth floor comprises the general administration, book, and cashier’s departments. There is also a museum which is rapidly becoming of considerable interest as a permanent, fireproof resting place for what have been, in most cases, cherished family heirlooms. These are mounted on the walls or displayed in show cases, each article accompanied by a card bearing the name of the donor, with a brief description of its history. The public is invite4 to inspect the museum at any time during business hours.

LEFT: North Bay of the Art Department on the Sixth Floor.
RIGHT: West Bay as Seen from the Art Director’s Office.

Our art department on the sixth floor, in its arrangement and equipment, is among the finest in this country, the photographic branch being particularly complete. Something over i5,OOO illustrations have appeared in our pages since the first copy of the magazine was published. The building is fireproof throughout, being constructed of brick, steel, concrete, and tile. It was completed in 10 months, by Marshall & Fox, the architects and builders. At the formal opening recently, over 700 guests inspected all departments

It is the policy of the magazine not to indulge in special editions, nor to announce forthcoming features. Our effort is to try to do each month at least a little better than the one before; it should be no violation of policy to say we hope to at least live IIp to this endeavor. When in Chicago, our readers will find a warm welcome, and a guide to take them through all departments of the making of a magazine, should they honor us with a call. 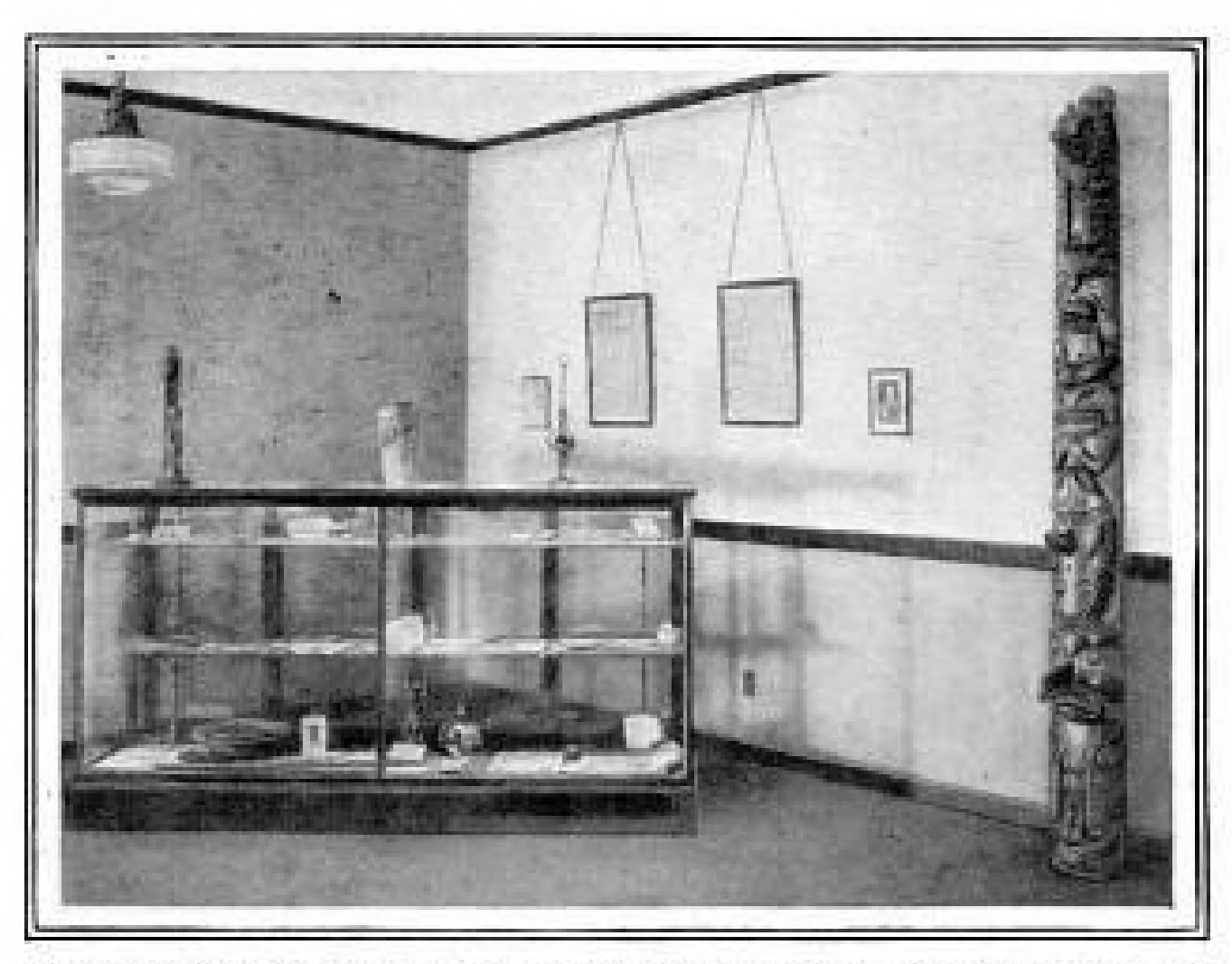 A Corner of the Museum Floor of the New Building: The Collection Has
Many Exhibita of Rare Interest 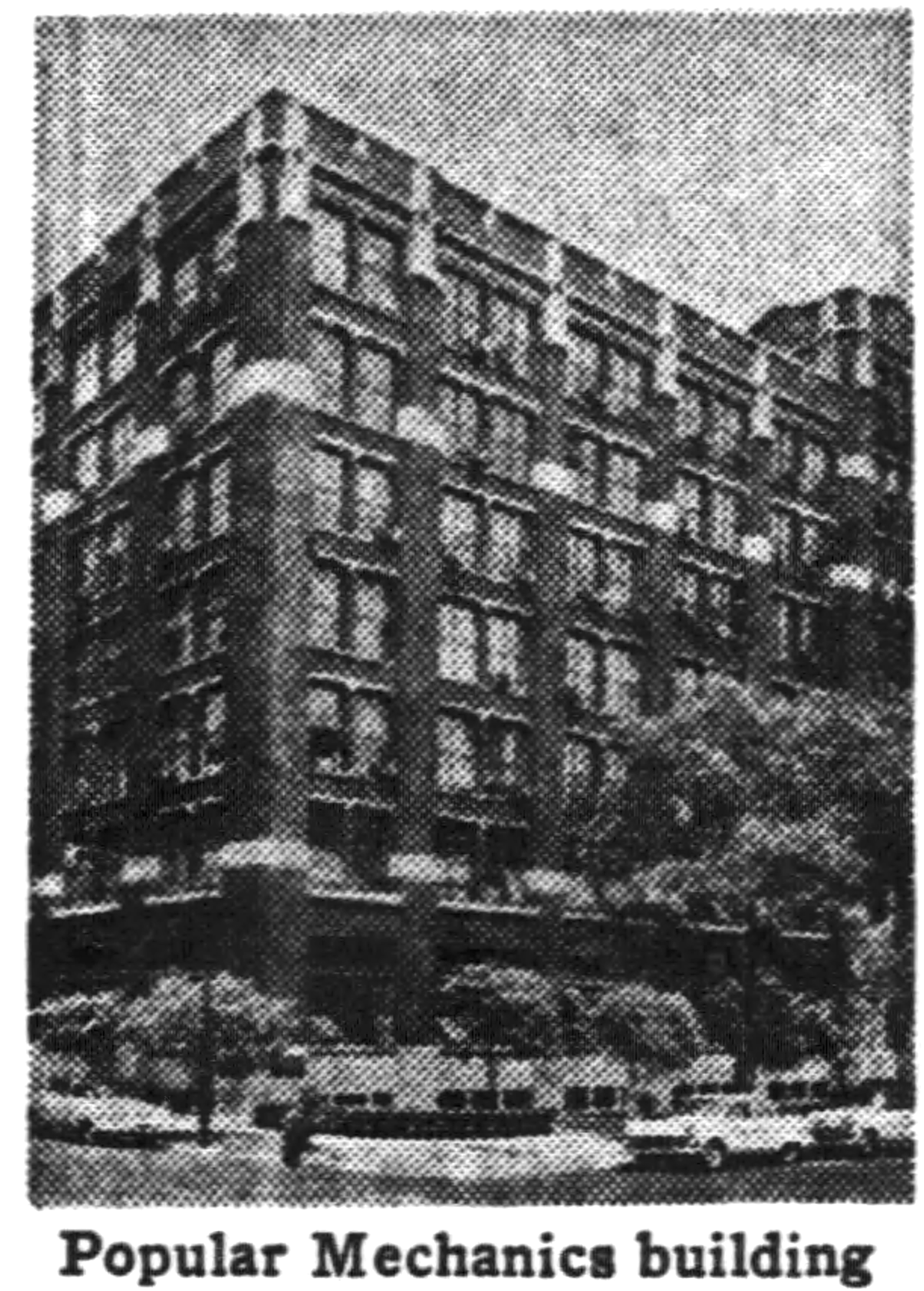 Popular Mechanics magazine, which had been published in Chicago for 60 years, moved its publishing, editorial, and advertising operations to New York City earlier this month. Hears corporation purchased the property in 1958.

The 7-story building in Chicago was designed by the late Benjamin Marshall in 1922 for the Henry Windsor family, founder and publisher of the Popular Mechanics publication.

The building, which is now vacant, contains 100,000 square feet.

Howard L. Storch, president of Browne & Storch, Inc., who was the broker in the sale, said that a substantial amount of money will be spent to modernized the building. Browne & Storch, which has been named rental agent, will concentrate on advertising, publishing, and graphic arts firms as tenants, he said.

The acquisition by Hibbard, Spencer, Bartlett is an investment and represents an addition to the company’s real estate portfolio, said O. W. Ahl, president of the hardware distributor.