The acoustic properties of the new Orchestra hail In Michigatn avenue in which ihe Chicago orchestra is to make its home, were tested yesterday and found to be ideal Conductor Theodore Thomas1 held a private rehearsal in the auditorium of the structure and afterward expressed his complete satisfaction with the tonal effect.

As the building neared completion. the part that material construction plays in the making or marring of music has been the anxious burden of the mind not only of the veteran conductor but of John L Erwen. who, as a member of Thompson-Sterritt company, the contractors, has given his personal attention to the work. Mr. Thomas has been a daily visitor at the building.

The rehearsal yesterday took place at 5 p. m. Half a doren directors of the orchestra attended by special request. When these officials arrived, however, they found their invitations did not admit them to the hall. It has been a lifelong rule with Mr. Thomas that no person not directly a part of the orchestra shall be present at a private rehearsal. The association directors stood in the corridors of the building and the orchestra played the Pilgrims’chorus from Tannhäuser, and “Death and Transfiguration,” by Richard Strauss The directors heard clearly.

“The greatest possible success has been achieved in the construction of the bail from the view point of acoustics,” said Mr. Thomas later to the directors. “The quality of the tones is beyond all expectations.”

The first public rehearsal and concert In the new hall will be held next week. 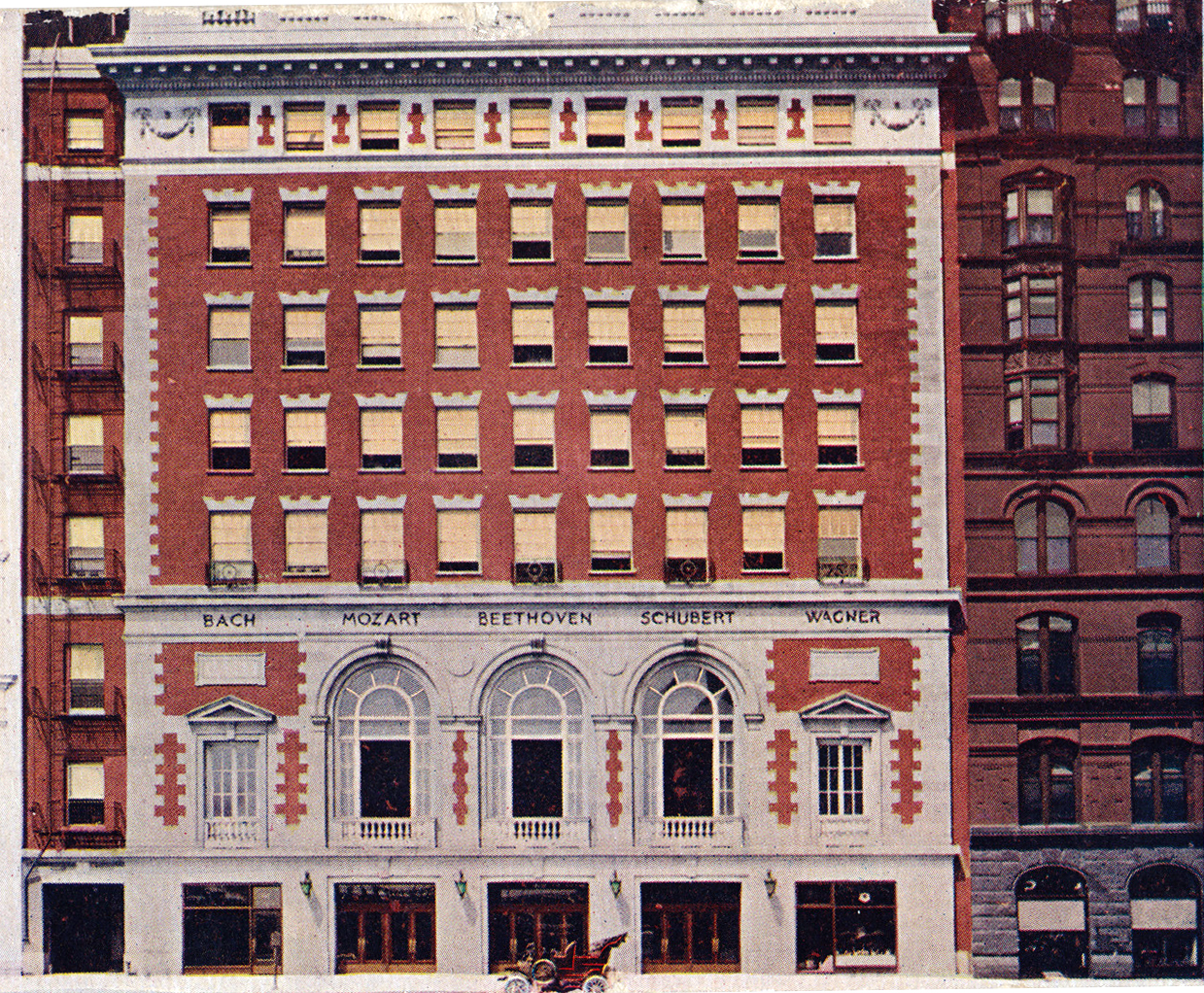 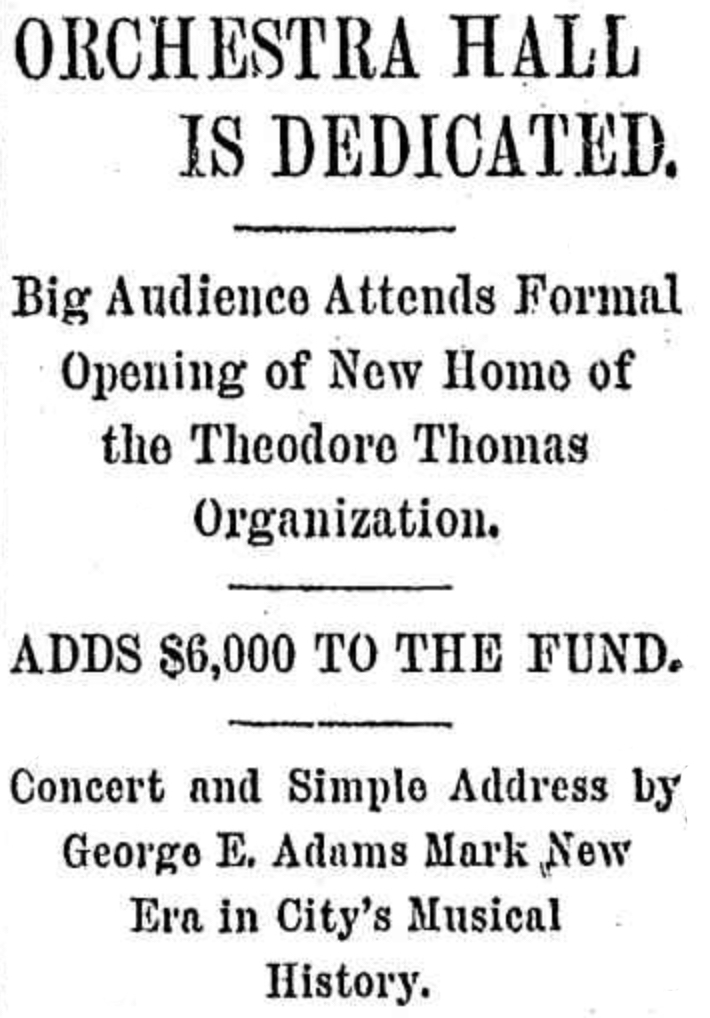 Orchestra Hall, the new house of the Chicago orchestra, in Michigan avenue, was dedicated last night with a concert in which the Apollo Musical Club and the Mendelssohn Club participated. An audience of 2,200 persons heard the program of five numbers and the program of five numbers and the dedicatory address of George E, Adams. The receipts of the evening will net nearly $6,000 for the building fund.

A rare simplicity marked this most important event in the history of Theodore Thomas’ organization. The evening partook of the character of the man whom in fourteen years all Chicago has come to know and love. Without display, without ceremonies, but with an unadorned sincerity of appreciation, audience and musicians met in their new home.

Roof Tree for Music Lovers.
Society was represented by its leaders, but the occasion was more than a society event. It was the unostentatious gathering of a big family of music lovers, each of whom had contributed his dollars or his pennies to the building of the permanent roof tree. 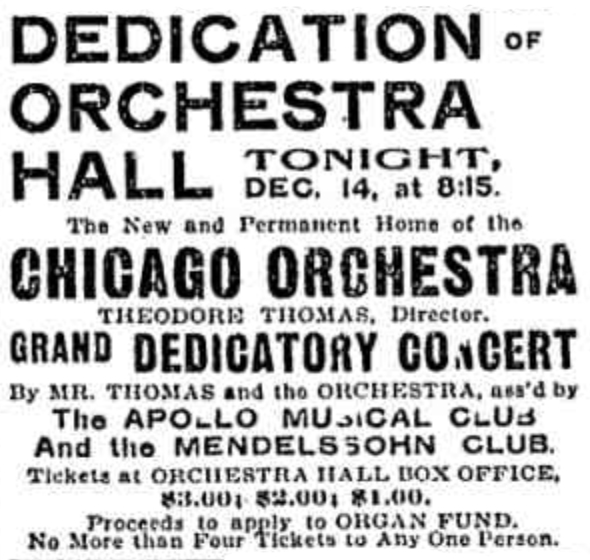 The little informalities and intimacies of the Chicago orchestra family were in evidence on every hand throughout the evening. Conductor Thomas, undemonstrative as ever, led his musicians in the same and dignified manner long familiar to the family, and, though loge, balcony, and gallery sought with storms of applause to tempt him into speech, the leader only smiled and bowed and outspread his arms in the most expressive gesture of gratitude and appreciation. Then he smiled and bowed againm and adjusted his spectacles, as if at a loss for words to say for the family he looks upon as his children and the musician he calls his boys.

Find Auditorium Pleasing.
The auditorium of the new hall appeared to delight the music lovers beyond words. They found themselves seated in a lofty room decorated with the utmost simplicity of taste. The half dome of the stage with its three batteries of organ pipes and the auditorium with its boxes and two balconies, beside the main floor, are throughout in a delicate cream color, the ornament being panels and bas-relief festoons of the Louis XV period.

Three bands of electric lights arch the auditorium, while the proscenium arch shows an inner rim of light, and another ribbon of shaded illumination is around the rear of the stage. The panels of the stage converge to the apex of the half dome, interspersed with panels of cloth screen resembling glazed glass. Few finishing touches remain to be applied to the auditorium, but the grand foyer behind the boxes and the stairways and minor hallways still are far from finished.

Audience and Singers Grow Intimate.
At 8:15 o’clock the members of the Apollo and Mendelssohn Clubs began making their appearances through the stage doors and climbing the amphitheater which rises in the rear of the stage.

At 8:25 the audience with eyes on a side stage door was rewarded. Amid tremendous applause Mr. Thomas walked to his rostrum and made two bows, just as he was went to do every Friday and Saturday in the Auditorium. Then without ceremony he tapped his baton and led the orchestra into the opening strains of the chorus “Hail, Bright Abode,” from Tannhäuser. 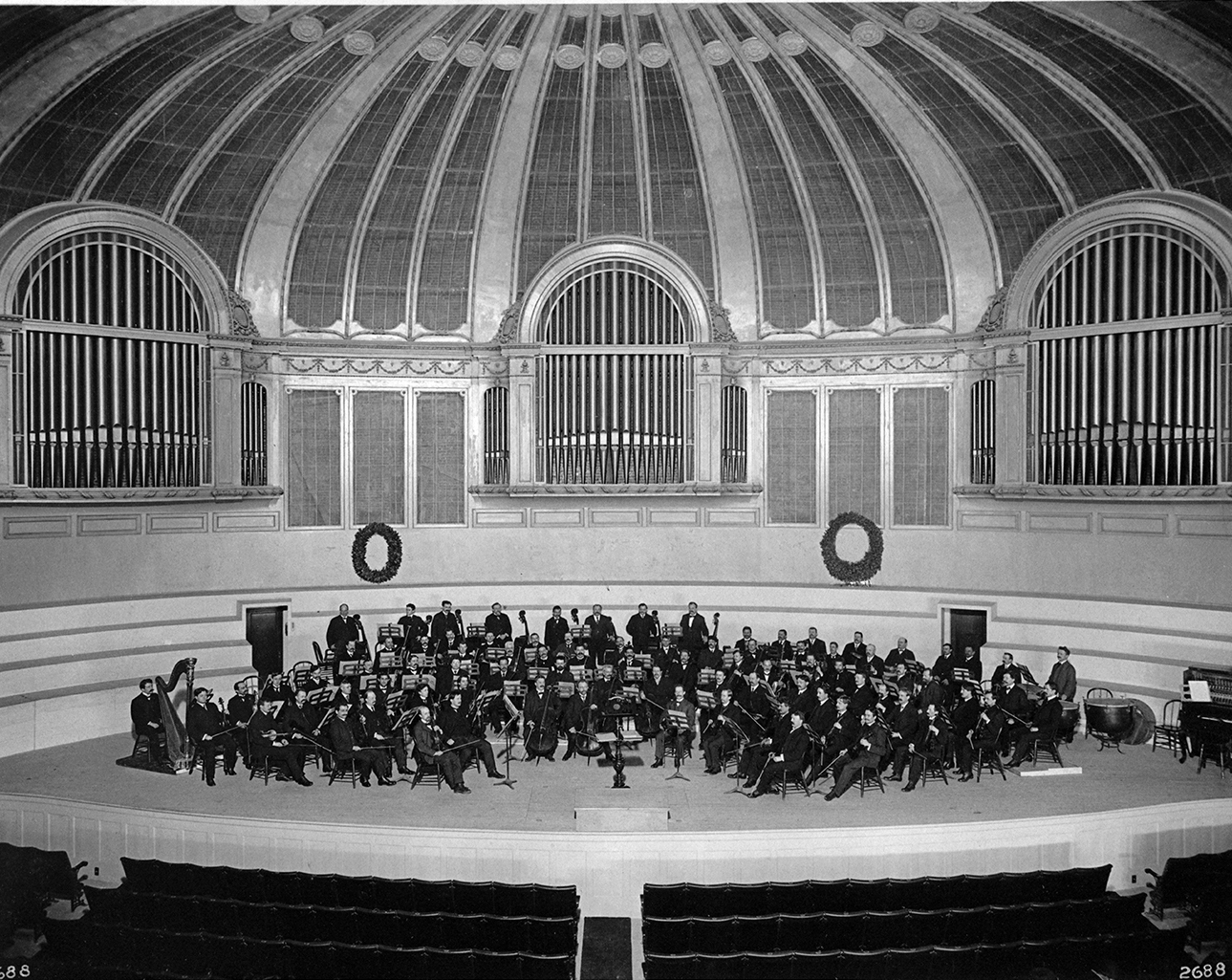 BY W. L. HUBBARD
“How is Orchestra Hall acoustically?”

This was the thought undoubtedly most prominent in the minds of the majority of the patrons of last evening’s concert. It was known that Mr. Thomas had expressed himself as satisfied with the hall as far as the work of the men on the stage was concerned, the rehearsal held last Sunday had aroused hopes for complete success also as far as the auditor was concerned, but the fact of the hall being empty at that time made definite decision on this point impossible.

Last evening the hall was filled—or nearly so—with listeners, the three large spaces at the back of the platform, which were yawning charms on Sunday, had received their gilt organ pipes, and conditions practically normal were thus established.

It would be an act both graceful and joyous to state that the concert last evening convinced that Orchestra Hall was all that could be desired—that it was a concert room virtually faultless. Such a statement was hoped for and was expected after the hearing of Sunday. But the facts are so far as personal observation and attention could establish them last evening make such a statement now impossible. And the disappointment felt because of this is only the more keen because the contrary had been so earnestly desired. 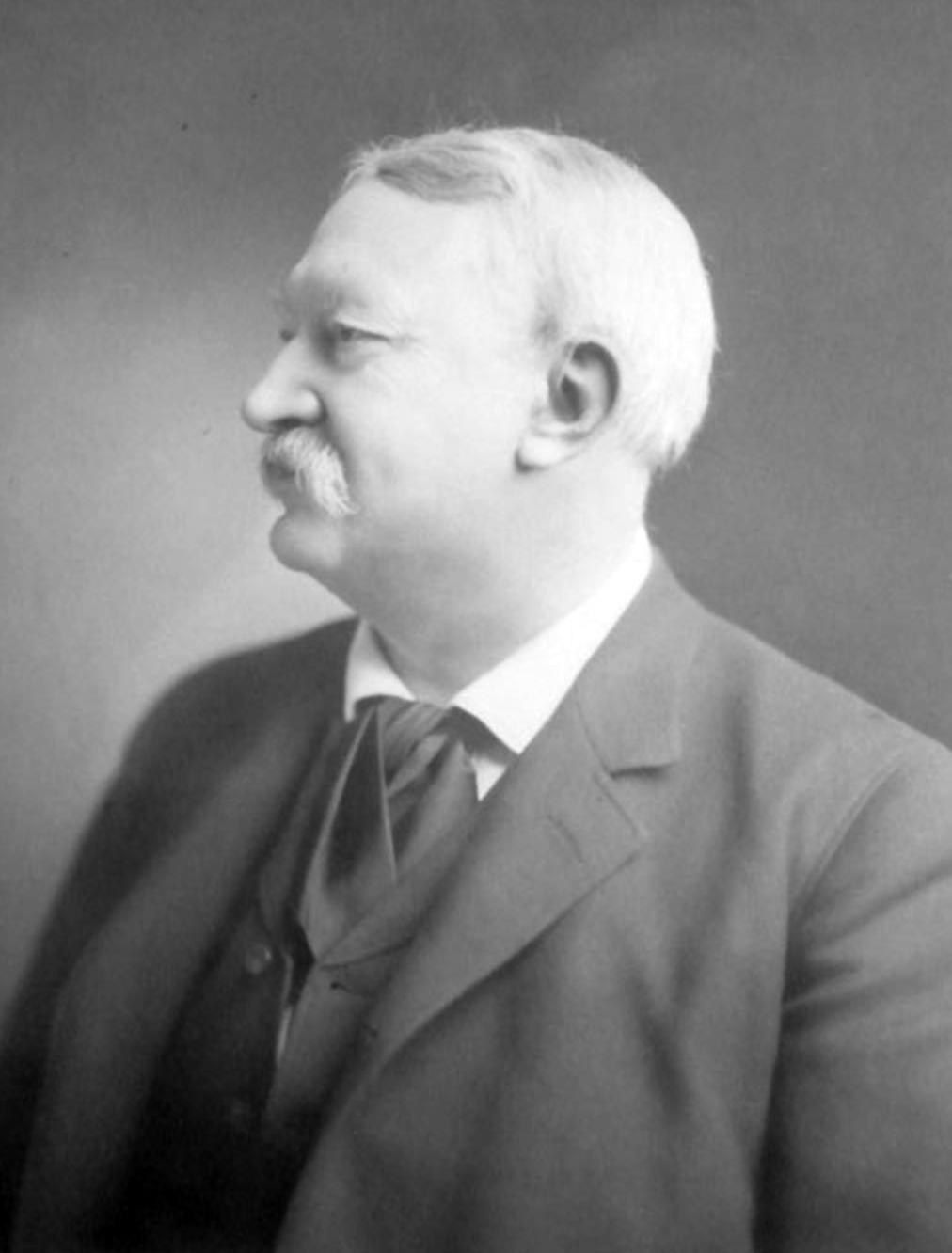 The chorus from “Tannhäuser,” the speech of Mr. Adams, and the “Tannhäuser” Overture were listened to from the fourth row from the stage in a seat exactly in the center of the house. The location was too far front to judge accurately as to the work of the players and singers. The speech of Mr. Adams was heard perfectly, and it is believed that the spoken word from the forward part of the platform is clearly audible in every division of the hall.

The brass instruments completely swallowed up all the rest of the orchestra so far as tine was concerned, whenever a forte or fortissimo was employed. The quality of the strings when heard alone was hard, and wanting in the warmth and viability which heretofore been their distinguishing characteristic. The wood winds came out prominently, but much of their beauty was lacking. The voices of the singers stood out well, although, of course, the arrangement with the sopranos and contraltos so widely separated, and the men so spread was unfavorable. In the bit of violin obligato in the Overture Mr. Kramer’s tone seemed to have grown suddenly small and colorless.

For the Strauss “Death and Transfiguration,” a change of position was made to the back row of the parquet floor, directly in the center of the house, and later about half way round to the right. The tonal mass was better here, but seemed muffled, and was small compared to which we have been accustomed to in the Auditorium,. And while the individual choirs stood out distinctly enough, they failed to blend. Clarity was wanting. And the brasses simply engulfed every atom of string tone whenever they blared forth. A passage for the double basses, which has always been exactly discernible when heard in the past, was nothing but a blur of tone, and the kettledrums were hollow and “tubby.” The life and strength of the orchestral tone seemed to have been in some mysterious way extracted, and a dull, twisted blend of sound remained.

The lower floor of the hall, as far back at least as the front rows and the back rows are concerned, proved unsatisfactory acoustically. A listener who had a place in the middle of the house, just from under the edge of the box tier, and whose knowledge of orchestral matters is recognized, told me that the effect from his seat was satisfactory when the orchestra played piano or only medium, but as soon as forte or fortissimo was reached the brasses hurled everything else. The tone volumes was small here, however, compared to that heard heretofore in the Auditorium.

For the Beethoven C minor symphony2 position was shifted to the balcony—first at the extreme rear, later at the center out from under the gallery. At the rear, the same want of clearness was discovered. It was as if the tine twisted in some way, all figuration, for example, in the Variations being indistinct when not actually lost. Even the middle tones of the woodwinds sufficed to drown the strings here, and the brass simply changed the orchestra into a band. The strings when heard were glassy and wanting in all sensuous beauty and nobility.

From the center of the balcony the effect was better than from any spot previously occupied in the hall, but even here the trombones and trumpets were disproportionately loud, the kettledrums were wanting in body, and the “whirl” for the double basses in the third movement was more amusing than even Berelioz3 found it. It was not the “dance of elephants,” it was a buzz and blur. The general effect was the most nearly satisfactory here, but it was surprising to find how small the orchestra sounded. It was as if the number of men had been divided in half, and in quality of nobility and refinement seemed to have suddenly vanished.

For the first time since the Chicago orchestra has been heard it sounded common,. This is an unpleasant thing to say, but the fact is incontrovertible. Whether Mr. Thomas by shifting his men can restore the balance is a question which, of course, he can answer better than any one else in Chicago. He has accomplished much in the past with unfavoring materials and unsatisfactory conditions, perhaps he can bring success out of those met with last night. It is sincerely to be hoped he may, for last evening it seemed that instead of having the Chicago orchestra given to us permanently, it had been taken away from us and an inferior unfinished organization substituted.

What the effect of the tone may have been in the box tier it was impossible to judge, for into this section of the house only the chosen may venture, and the gallery was inaccessible save by a climb down from the balcony and up again, and time was too brief for that. But with the main floor and the balcony taken into consideration it is safe to pass judgement on the new hall, and kindly disposed as one may be, and sincerely desirous of the success of the undertaking, it is believed that it would be part of ill advised kindness to try and gloss over or conceal the facts. To know the shortcomings may bring the impetus and the power to correct them; to blind ourselves to them will be to accustom ourselves to conditions which might be bettered and which are certainly not desirable. 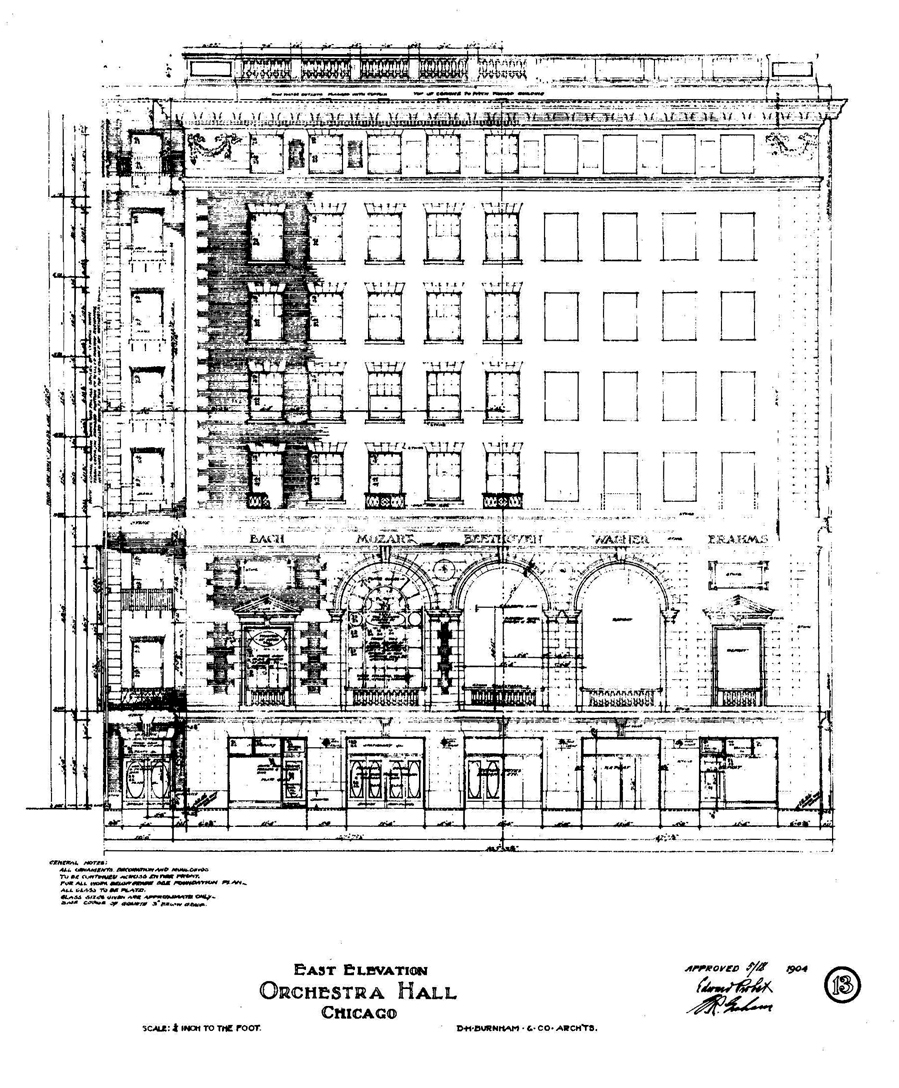 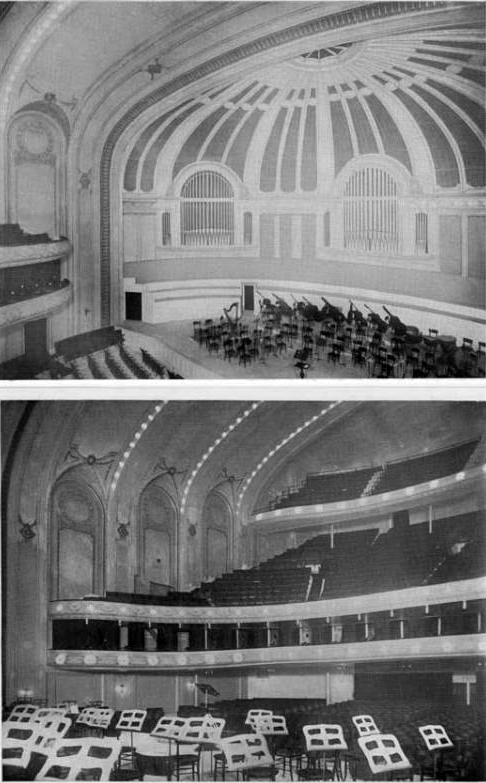 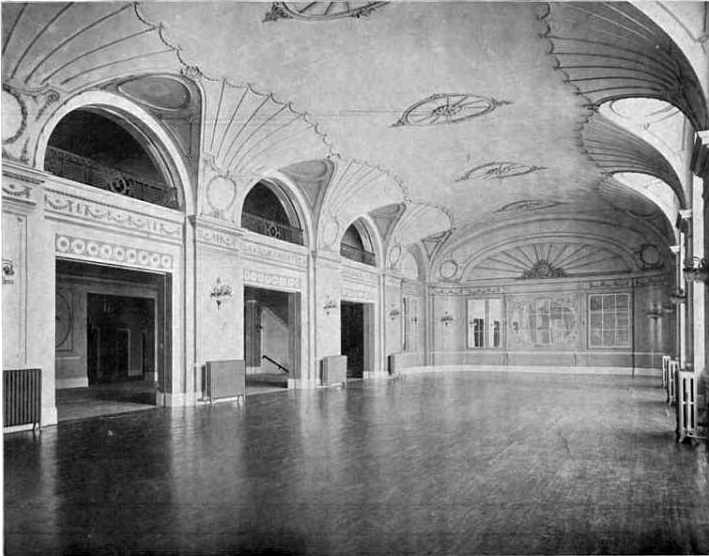 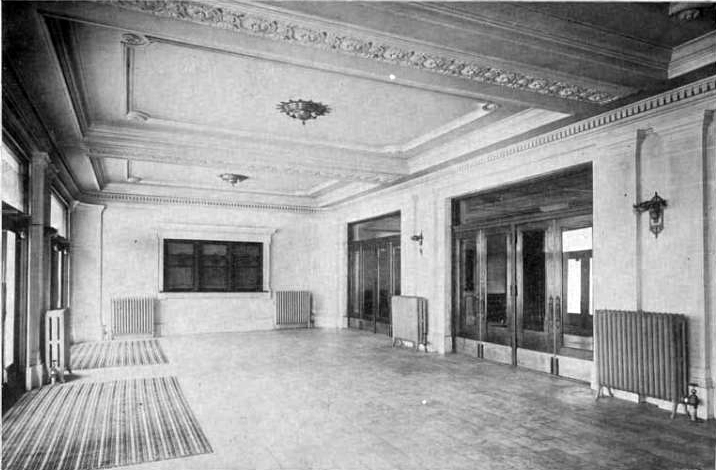 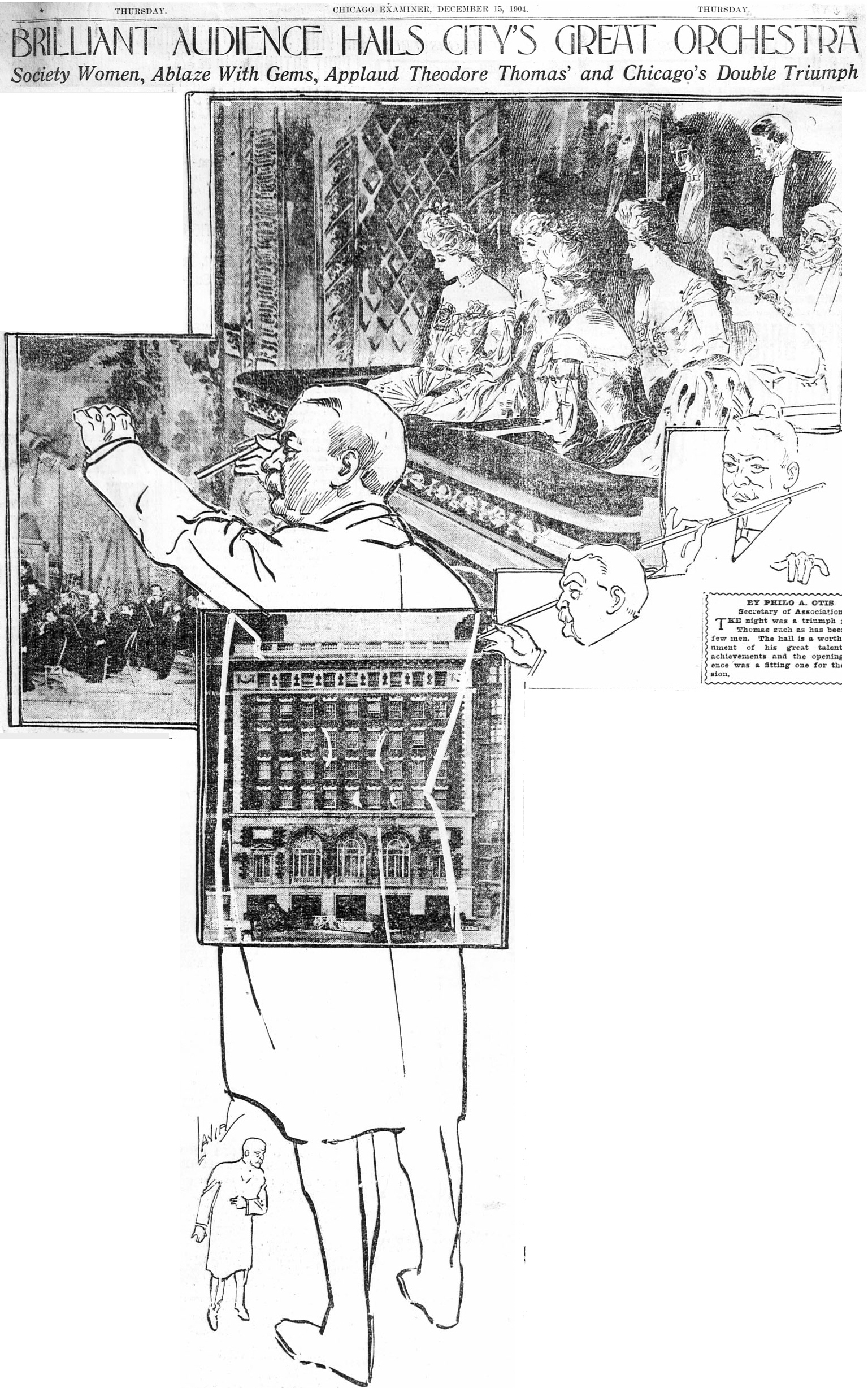