Where Fishes of All Sizes, Shapes, and Hues Delight the Visitor

CHICAGO, in addition to such show places as the Field Museum, the Rosenwald Industrial Museum, the Adler Planetarium, and the Art Institute, has two public aquariums, one at Lincoln Park, the other set amid ideal surroundings on a point of land jutting out into Lake Michigan at the east end of the Roosevelt road extension.

The latter, the John G. Shedd aquarium, is the largest and most completely equipped institution of its kind in the world, and one of the very few in America. New York, Boston, Philadelphia, San Francisco, and Detroit have aquariums, but nothing to compare with Chicago’s magnificent marble home for fish. 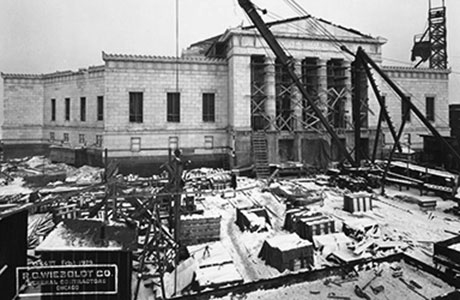 The aquarium was presented to the city by the late John G. Shedd, president of Marshall Field fe? Company for many years, who gave $3,000,000 with which to build, stock, and maintain this wonder house.

It is controlled by the Shedd Aquarium Society, whose trustees are prominent business men, and whose president is Melvin A. Traylor, head of the First National Bank of Chicago. The upkeep is provided for by a small tax levied by the South Park Board. The director, Walter H. Chute, was formerly in charge of the Boston aquarium.

In deciding to present such an institution to Chicago, Mr. Shedd was undoubtedly motivated by the knowledge that the Government fisheries exhibits at the World’s Fair of 1893 and at the St. Louis, Buffalo, and Omaha expositions, attracted more visitors than any other exhibit, and that one aquarium held, so far as known, the worlds record attendance, having at the time an average daily attendance of 5,000 over a period of twelve years.

This record was broken as soon as the Shedd aquarium opened. By the end of October, 1931, its attendance had reached a total of 6,223,323, representing a daily average of 12,300 visitors over the entire seventeen months it had been open to the public. Of this total attendance, 5,985,188 were admitted free, while 248,135 paid the nominal admission fee charged on “pay days.”

Thus it would seem that most people are at heart followers of Isaac Walton, while to others, the study and observation of the finny tribes holds a certain fascination and adventure.

Many new ideas were incorporated in the construction and equipment of the building. The exterior is of Georgia marble, in the Grecian Ionic style of architecture, and it is octagonal in shape. It consists of a main floor, a basement, a basement’mezzanine and a central tower which rises to a height of 100 feet. Only the ground floor is open to the public, however, the exhibits being so arranged that they all may be seen without climbing any stairs or retracing steps.

The aquarium proper is 300 feet in diameter, covering 74,614 square feet on the main floor, exclusive of the terrace, which is 30 feet in width. A spacious marble foyer hall opens into an octagonal rotunda, in the center of
which is a 40 foot pool, arranged as a semi’tropical swamp. A beautiful piece of rockwork in the center is covered with a profusion of plants, where snakes, frogs and turtles make their home.

Radiating from the rotunda are six main exhibition halls, each 30 feet wide and 90 feet long. The interior and exterior decorations, from the great bronze doors at the front entrance to the tiles that garnish the wainscoting,
take their artistic motif from forms of aquatic life in endless variety, such as fish, turtles, lobsters and reptiles. There is a wealth of interesting aquatic and nautical detail in the specially designed appointments, both decorative and utilitarian. An example is the beautiful grill work around the entrance, which is a lacy formation involving sea horses, snails, lobsters, starfish, sea-anemome, turtles, coral, shells of many kinds, rope with weights, and repetitions of Neptune’s trident. 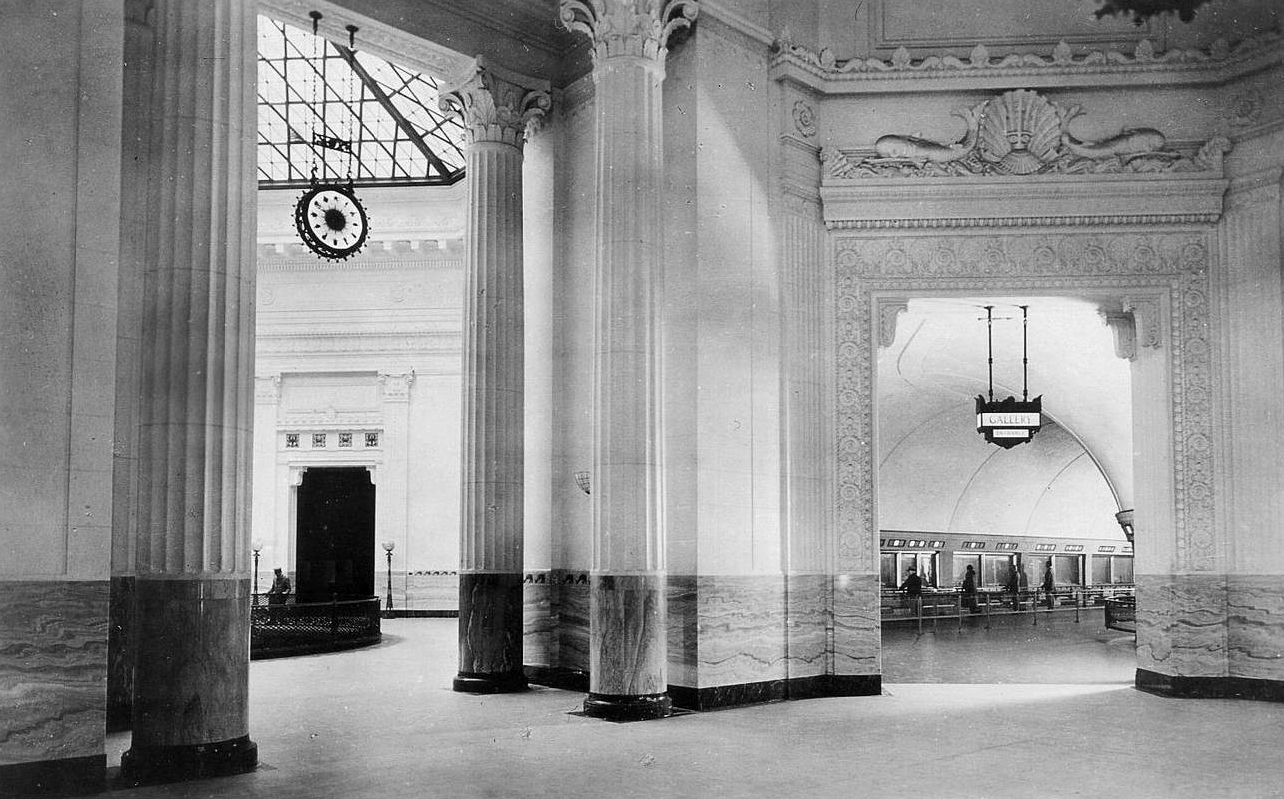 There are specially designed rooms for many purposes. There is a lecture hall with fire-proof projection room, photographer’s dark-room and laboratory, hatchery, hospital, feed rooms, refrigerating rooms, work shops, and many laboratories for various purposes. On one side of the foyer hall are the executive offices and lecture hall and on the other side is a “balanced” aquarium room.

Of special interest is this ”balanced” aquarium room. It is decorated in colorful Japanese style to represent an open air courtyard, lighted by eight large lanterns, each on a bamboo post. It is octagonal in shape with a central kiosk in which fancy goldfish are exhibited. An innovation in this room is the use of the new “violet ray” glass in all the skylights to insure a proper growth of marine plant and animal life, and a more faithful rendition of color. The fancy goldfish exhibited here are fine specimens, many of them prize winners costing as much as $75 apiece. The main wall of the room contains 65 smaller aquariums, planted with aquatic plant hfe, and in which tiny tropical fishes flash like jewels.

Some of these fish are very tiny, measuring not more than one-half inch when completely grown. Many of them are beautifully colored, with an irridescent sheen of silver or gold, or combinations of brilliant blues, flashing reds and splendid yellows that defy description. Here may be seen the renowned “walking fish” of Africa, which is known in its native habitat to walk over dry land, and on occasion even to climb trees. Also from Africa is the electric catfish, capable of giving an electric shock. There is a queer armored catfish, from South America. Another odd specimen is the hatchet fish, so called because of its extremely deep thin body which resembles the head of a hatchet.

For the larger fishes exhibited in the six main galleries there are 132 permanent exhibition tanks, 95 reserve tanks and a number of portable tanks, varying in capacity from 375 gallons to 13,500 gallons. The total capacity of all the permanent tanks in the building is about 500,000 gallons. Water is supplied from four reservoirs in the basement, the total capacity of which is 2,000,000 gallons, half of which is fresh water drawn directly from Lake Michigan. The other half is salt water, which was brought 1,600 miles from the ocean at Key West, Florida, in 160 tank car-loads. The salt water probably will last for twenty years.

The water is moved through five entirely distinct and separate systems of antimonial lead piping, which material has been found to best resist the inroads of salt water. These systems circulate heated and refrigerated salt water, and heated, natural and refrigerated fresh water. Thus the water for northern fishes is refrigerated while specimens from the tropics live in water heated by coils to the temperature to which they are accustomed.

The aquarium exhibits not only the common fishes of American fresh and salt waters, but also many rare and unusual varieties from different parts of the world. There are now in the building over 8,000 fishes, representing 345 species. Fish range in size from one-half inch in length to 585 pounds in weight.

In order to make possible this extensive collection, the aquarium owns and operates a special Pullman railroad car, the Nautilus, which is, in effect, a traveling aquarium. It is equipped with tanks and receptacles for the living fishes, and complete handling apparatus to accommodate all sizes. This car makes it possible to transport at the same time all of the five classes of fish; the cold salt water, warm salt water, natural, cold and warm fresh water
fishes. 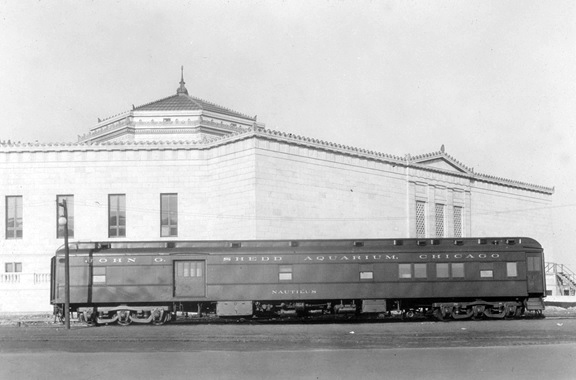 Interesting fresh water exhibits include the electric eels from South America, the large ugly salamanders from Japan, and the 585 pound sea-cow, or manatee, from Florida. Salt water fishes from Florida include the spade fishes, striped like convicts’ suits, squirrel fishes as delicately pink as cameos, with very large brown eyes and spines as sharp as needles. There are the sand’colored sawfish, with his dangerous doublcedged toothed saw
that he carries before him; the large sharks, which an attendant has tamed so that they will eat out of his hand, and some baby dog sharks, born in the Aquarium June 8, 1930. The blue angel’fish is one of the most beautiful specimens in the Aquarium, and one of the most difficult to acquire and transport to the aquarium alive.

Crabs are present in several different varieties. There is the stone and the hermit, the green and the blue crab. The beautifully colored and patterned queen triggerfish, a fantasy in blue and gold from the tropical coral reefs, gets its name from the trigger’like arrangement of the spines in the dorsal fin. And, of course, there is that very interesting little fish, the sea horse, the only fish that has movable vertebrae so that he can bend his head and tail. It reminds one very much of the chess figure called Knight.

Space does not allow mention of the many other interesting fishes to be found in this beautiful aquarium, where there is presented to the public the opportunity of viewing and studying the most comprehensive collection of live aquatic animals ever exhibited.

The Shedd Aquarium is open every day from 10:00 to 5:00. Admission is 25c to adults except on Thursdays, Saturdays and Sundays. Children are admitted free at all times. 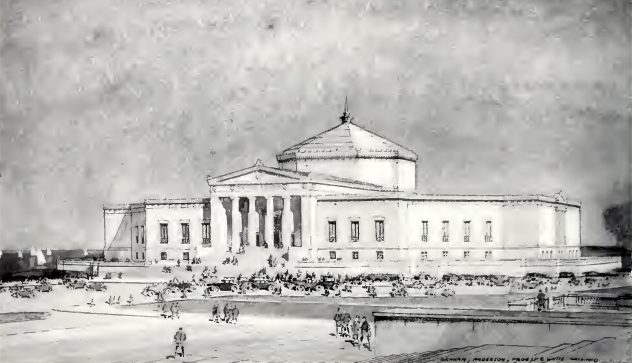