President Charles H. Wacker of the Chicago Plan Commission is receiving congratulations over the news that the lower house of Congress has voted a $4,250,000 appropriation for the new proposed Chicago post office on the West Side. The measure must again pass the house and go through similar stages in the Senate.

“We surely are delighted at the progress thus far made and hope that it is a forerunner of passage of the appropriation by the Senate and approval of by the president,” said Mr. Wacker.

“Chicago is the best paying post office in the country and has the most efficient corps of officials managing it. But the post office facilities are so inadequate that some large concerns must do their own postal work at this time.

“If a few of the largest firms would stop doing their own postal work the West Madison, South Canal and South Clinton streets is the most practical from every standpoint. Any site smaller than this one would be insufficient and a blunder in the face of the steadily growing post office business here.

“The Chicago Plan Commission has made a thorough investigation and shows what is needed. A post office of insufficient size would be a costly mistake. To build a smaller one would be to face a new problem by the time the structure was completed.

“Chicago is the center and post office clearing house for 53,000,000 within a radius of 500 miles and of many millions from abroad and the far East. Commercial organizations of nineteen states have endorsed our plan and the action of congress is an important step toward its realization.”

On May 23, 1932, U.S. Postmaster General Walter Brown laid the corner stone for what was the largest post office building in the world at 433 W. Van Buren street. The building was dedicated on February 16, 1934 but was not occupied until September 17, 1934. Former U.S. Postmaster General James Farley re-dedicated it on September 28, 1934 with formal opening ceremonies. Graham, Anderson, Probst & White were the architects and Magnus Gunderson as engineer. The building is 12 stories high, with one basement, on rock caissons, in air rights over railroad tracks. It is the largest post office in the world. 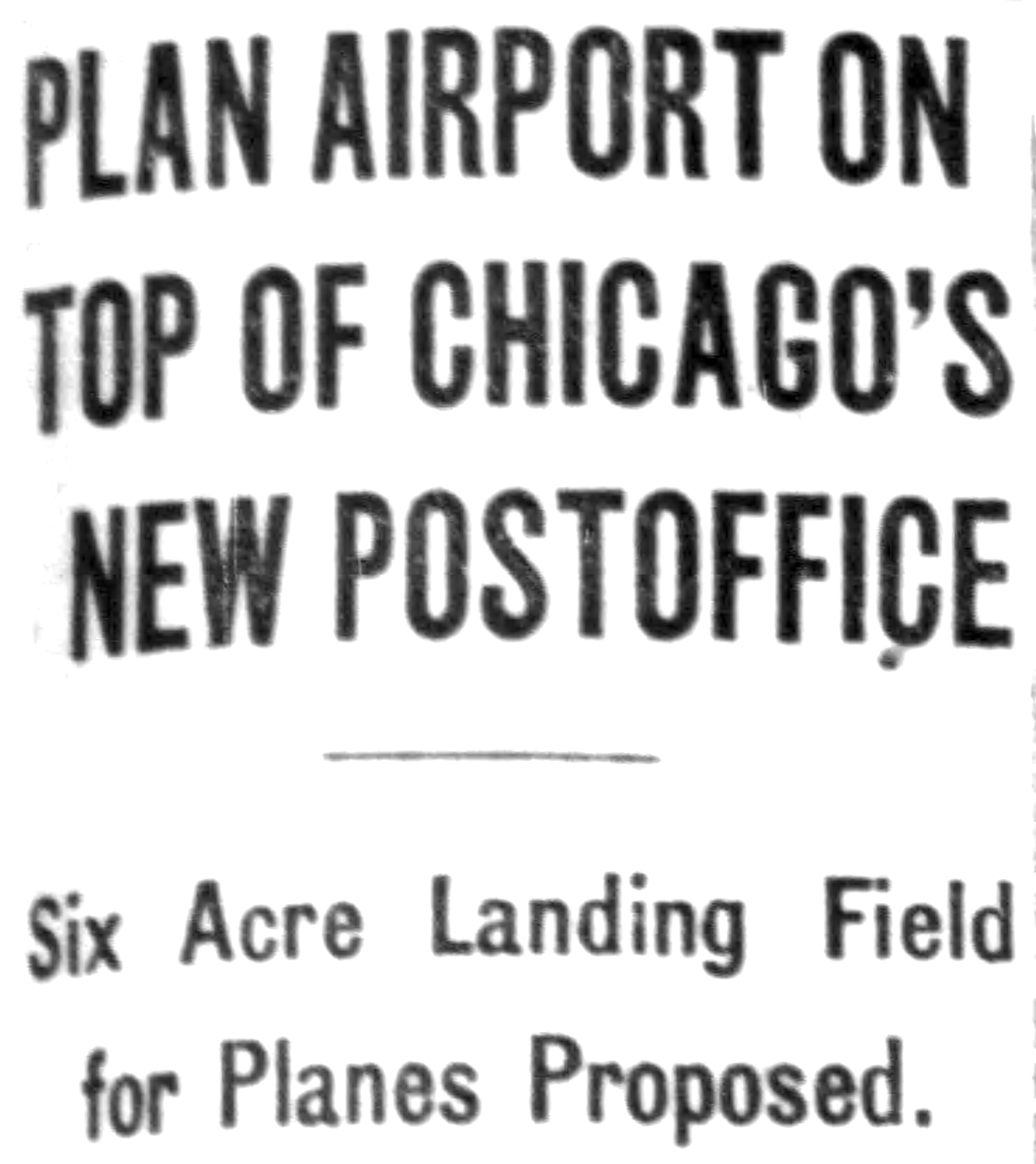 Plans for the new post building reached Postmaster Arthur Lueder yesterday, make provision for airplanes landing on its roof. Government officials believe that within a few years it will be possible for planes to land and take off in a limited area and in anticipation they are making provision for a six acre landing field on the building, which will be en the site bounded by Canal, Clinton, Harrison and Polk streets.

Aviators generally do not believe the roof to be of sufficient area for landing in flying’s present stage but numerous manufacturers are experimenting with devices intended to stop a plane soon after it comes down. The proposed landing field now being prepared by the south park board on an island east of the Field museum is less than a half mile by a quarter mile in dimensions, considered the least possible area for use now.

No Appropriation for Building Yet.
Inasmuch as congress has not yet appropriated for the new building, the thought back of the roof plan is that by the time the building is erected the airmen will be able to make it serve their purposes, it was said. The most up to date equipment for the handling of mail is also to be in the new office.

In commenting on the use of aircraft on the top of the building, Frank E. McMillin, chief of the division of postoffice quarters and engineering at Washington, said that airplane companies are now working out the problem of how to stop and start airplanes from a limited area of six acres.

“The proposed building is 320 by 100 feet and should furnish landing facilities on the roof for air mail planes,” Mr. McMillin said. “The rapid advancement of aeronautics will by tho time this building is completed make such landing practicable.”

The new postoffice site Is 320 by 100 feet. approximately six acres of ground space. It is contiguous to the Chicago Union station. making possible direct handling of mail to and from trains entering that station. The building Is to be six stories high. The height of adjacent buildings at p4sent would not interfere with the landing of airplanes on the roof.

Features of New Postoffice.
Platforms on the first floor will provide for train and mail car separations, in a manner not previously utilized in any postoffice in the United States, it was said. Other new features which have not yet been used in the larger offices but the worth of which has been demonstrated in major postal stations make the proposed office a model for the construction, with minor changes, of all the large postoffices authorized by congress in the public buildings program.

One of the new features to be used in the Chicago building is known as a gravity table, of which there are to be seven. The use of these tables at Dallas, Columbus and Buffalo, through the elimination of duplication in sorting, has resulted in an increase in the average parcel handling ability of clerks ranging from 66 to 163 per tent, postal officials said.

Used in Chicago, the gravity tables sill make possible ten minute train connections. Formerly an hour or an hour and a half leeway was necessary.

Architectural drawing of the building to be erected on the six acre tract bounded by Harrison, Polk, Clinton and- Canal streets, showing airplanes on the roof, which is considered somewhat small for an airport.

CHICAGO is to have the largest post office in the world. The fifty-acre, twelve-story building will be completed and ready for occupancy within about a year and a half, according to a recent announcement of the United States Post Office Department. It will be able to care for the 19,000.000 letters a day expected by 1943, in addition to the parcel post packages and newspapers. In one year, it is estimated, the total amount of mail handled would be sufficient to fill completely a structure four times its size.

More like a factory than a post office are the workings of this structure. Motor trucks, one every minute, will bring in letters from collection boxes throughout the city. These letters will be shot upward in elevators to the upper floors, and travel by gravity down through the building. By the time they reach the ground floor they will be canceled, sorted, and ready for dispatch by train or airplane. On this page our artist shows some of the mechanical devices behind the scenes that will speed letters.

In the parcel post room, for example, an attendant drops packages from a main belt upon conveyors that classify them by states. Where the volume of mail requires two conveyors for one state, mail for cities with the initials “A” to “L” goes on one belt, and “M” to “Z” on the other. 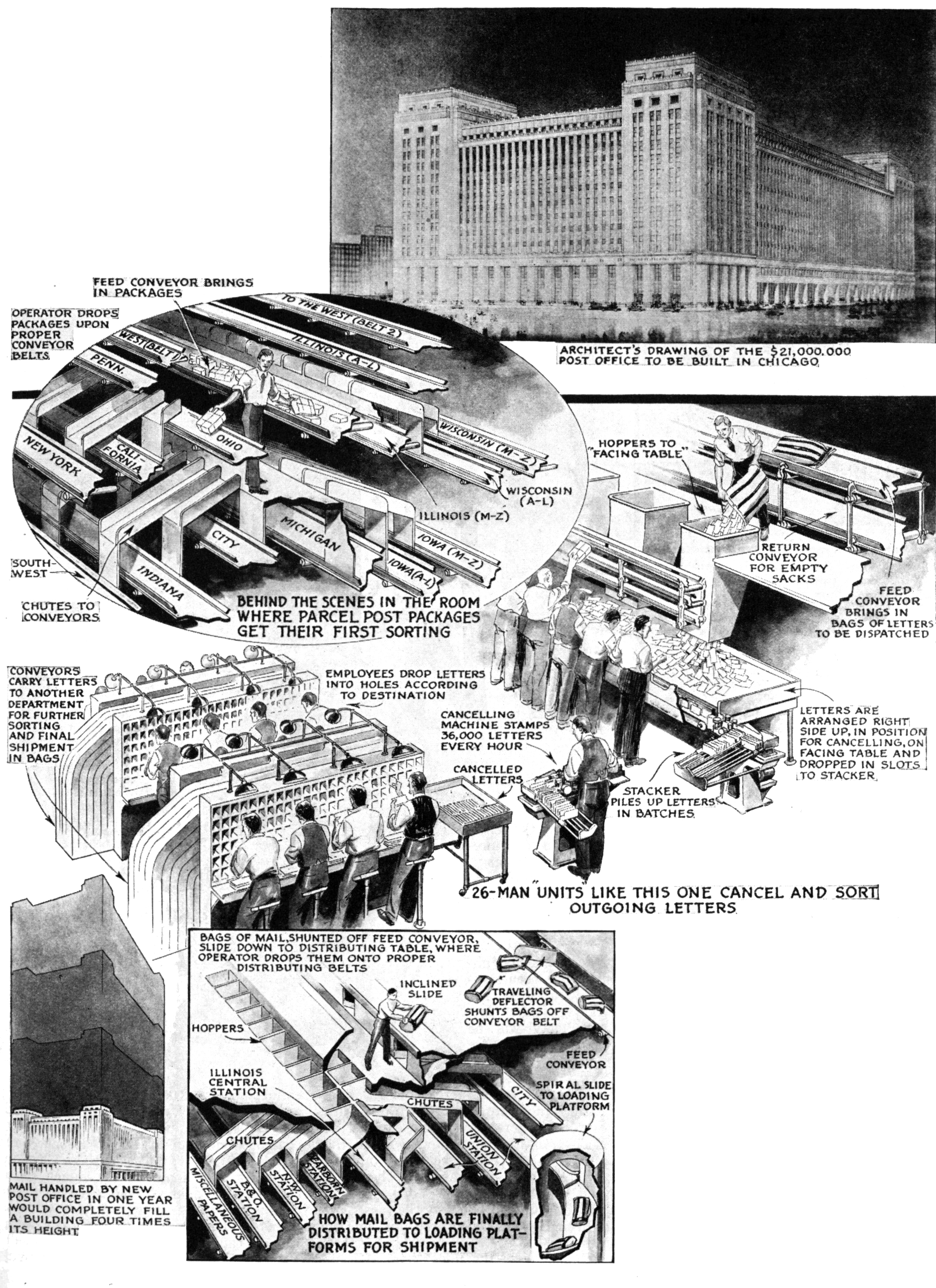 Formal opening ceremonies will be held at 2:30 p.m. tomorrow for Chicago’s new $6,000,000 postoffice. Invitations to attend the ceremonies have been issued to prominent citizens by Postmaster Ernest J. Kruetgen.

Although the building was completed early last year, full installation of all major postal offices was not completed until recently. Shortly befire the Democratic administration took office in March, 1933, the postoffice, largest in the world, was dedicated by Former Postmaster General Walter Brown and other Republican officials. At the ceremonies tomorrow Postmaster General James A. Farley will be pricipal speaker. Mayor Edward J. Kelly, other city officials, and members of the Association of Commerce also will speak. 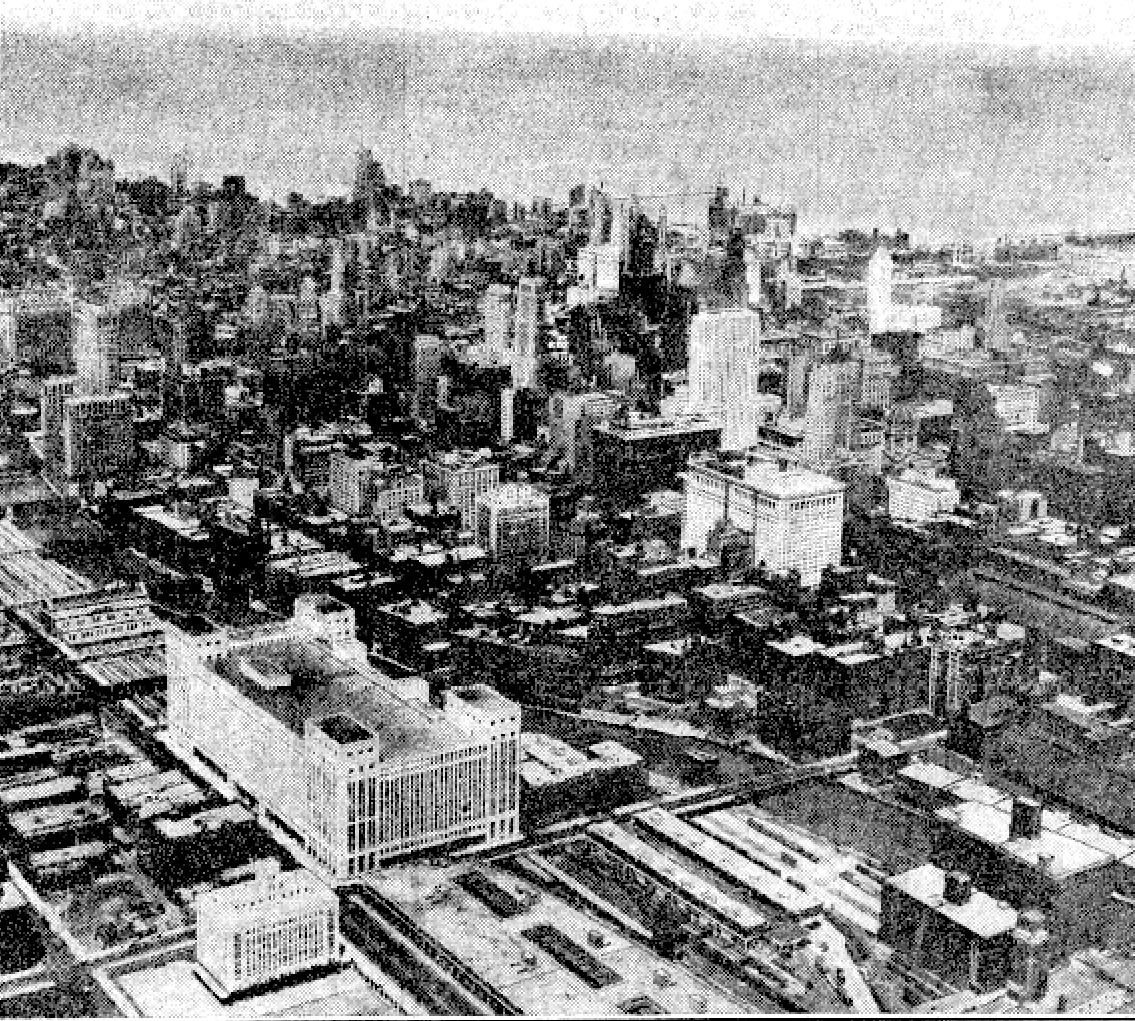 FORMAL OPENING OF NEW $16,000,000 POSTOFFICE SET FOR TOMORROW.
Aerial view showing the new postoffice (lower left) and the towering skycrapers of the downtown district. The event tomorrow will mark the installation of complete equipment. Prominent speakers are on the program. 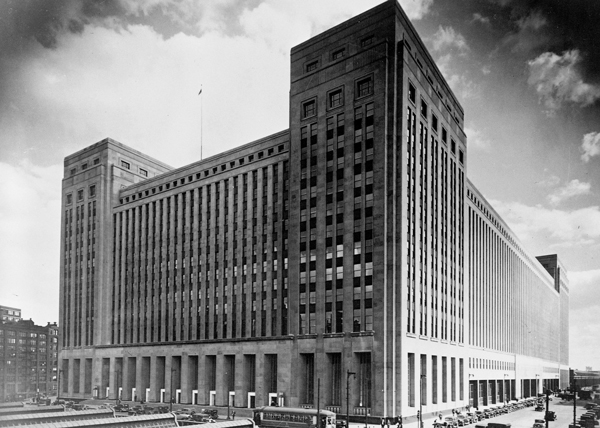 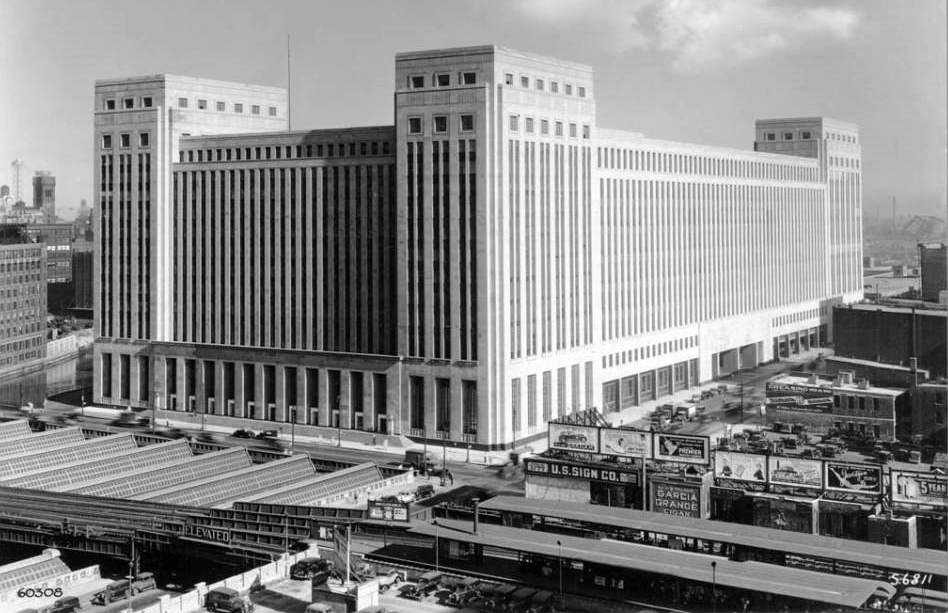 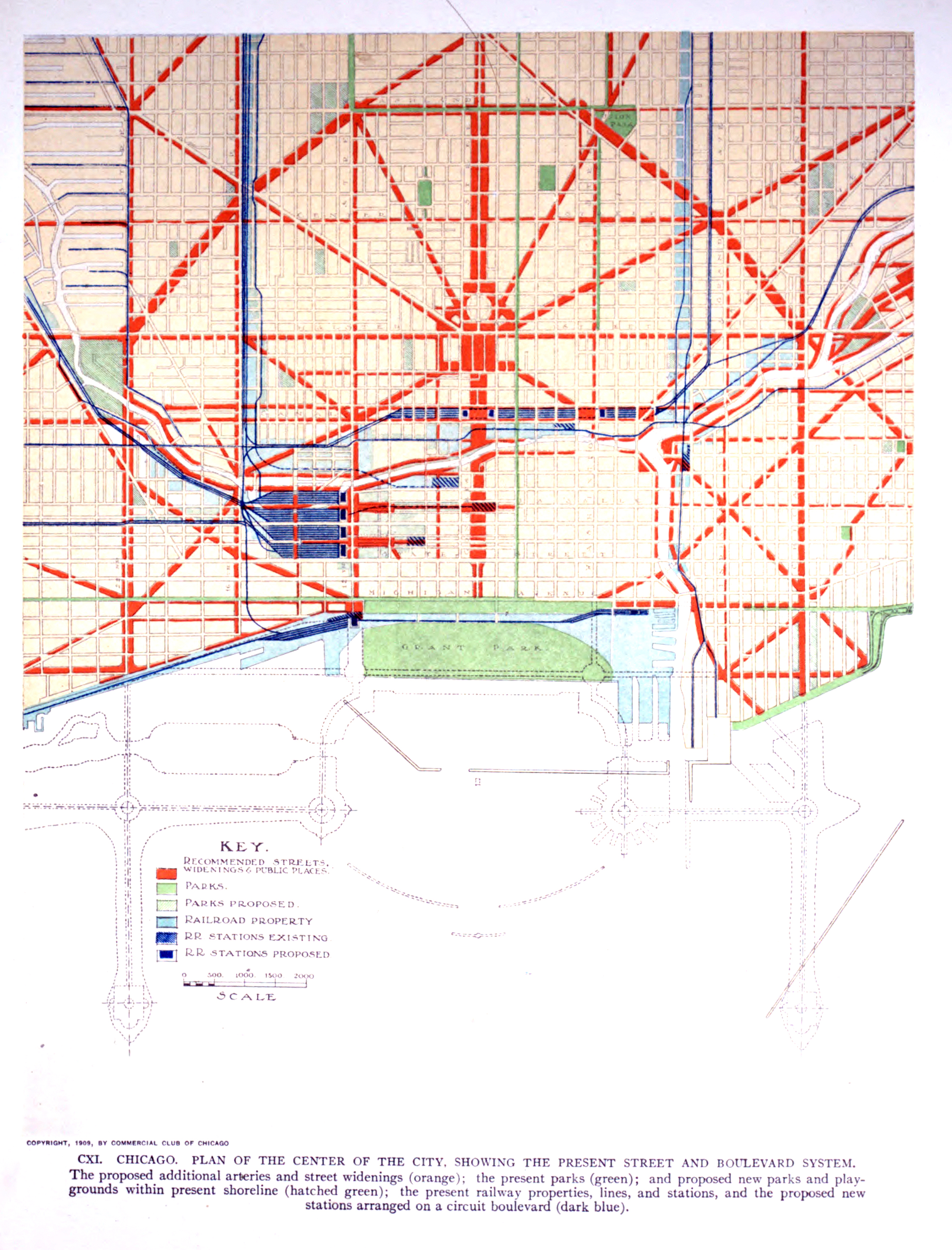 The proposed West Loop railway stations west of the Chicago River with the Civic Center beyond at Congress and Halsted which eventually became the Eisenhower Expressway. From Burnham’s 1909 Plan of Chicago.

View west from the Post Office along Canal Street, during the construction of the Congress Expressway (Eisenhower Expressway), in 1949.

The Congress St. Super Highway. Looking West from above the Post Office.
Space has been cleared for the highway in the middle of the Main Post Office, but the bridge over the Chicago River has not yet been built.
11 August 1953
Photo by Bob Kotalik