This is the latest picture of the new Hotel Moir, which the Hotel Moir Company will build on the site of the Morrison Hotel, at the southeast corner of Madison and Clark streets, after plans by Marshall & Fox. It will be twenty-two stories high and will front 100 feet on Clark street and 234 feet on Madison street, the greater part of the building having a depth of 190 feet. It will cost $5,000,000. 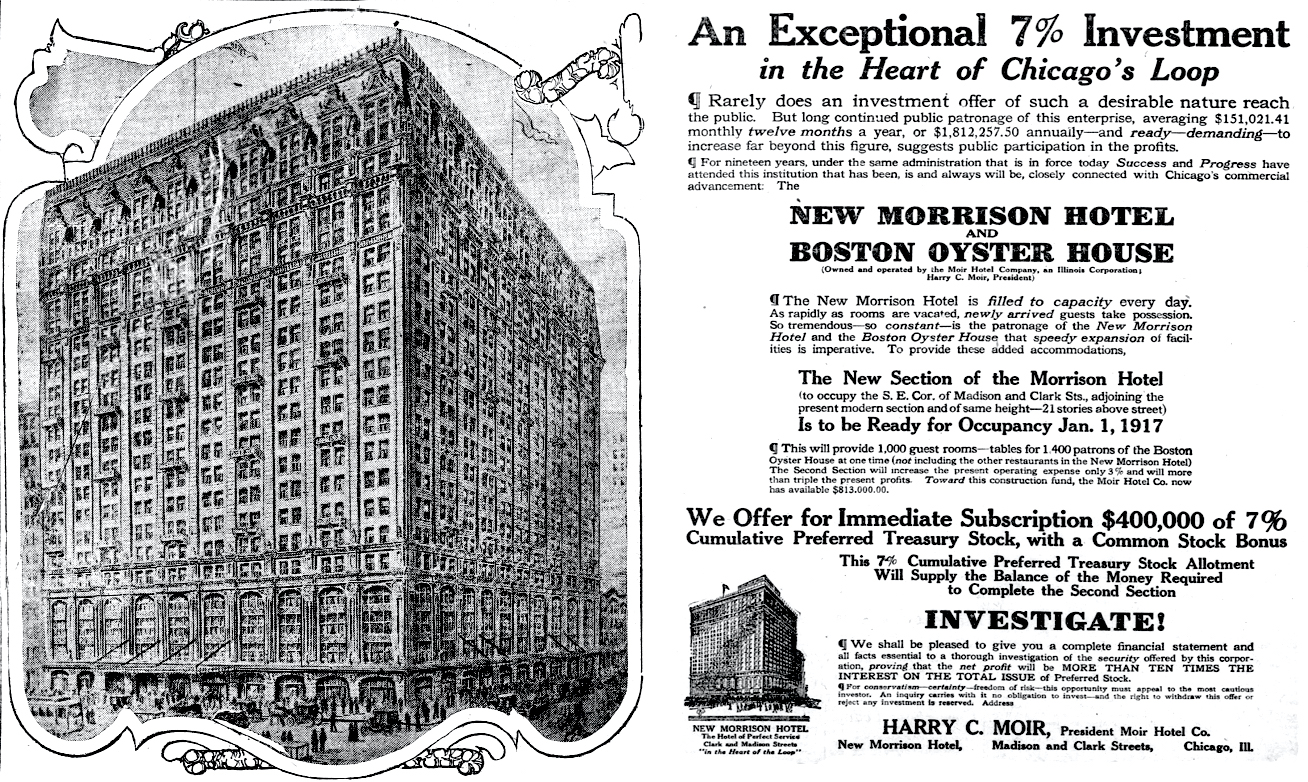 Chicago is to have the biggest hotel in the world.

Chicago in plans announced yesterday by Harry G. Moir, owner and proprietor of the Morrison hotel, assured the erection of twenty-one story building at West Madison and Clark streets, which in time will supplant the establishment.

The “new Morrison” will be larger than the recently opened McAlpin hotel in New York.

It will contain 2,500 rooms, each room with a bath. Five hundred will be equipped with shower bath. An elaborately appointed roof garden will be one of the popular features, while a sublimated Boston Oyster house will occupy the entire basement.

Floors For Bachelors.
Among other innovations contemplated are entire floors to be given up to bachelor guests, and another floor will be set aside where bachelor girls may secure moderate priced apartments. Girl bell hops and attendants will be employed exclusively in the feminine zone.

The larger plans were made possible through the underwriting of q $2,000,000 bond issue by Graham & Sons, bankers, secured on the leaseholds and proposed building of the Morrison hotel. The building is to be erected in sections, work on the first of which already has begun.

Old Hotel Open While Building.
The old hotel will not cease operating for a single day while the new structure is going up around it. The first section to be built will occupy sixty-seven feet on West Madison street just east of the original Morrison hotel. Caisons for this structure have been laid. This section will be completed within twenty-one months and the second section, on the corner, eight months later.

Marshall and Fox, architects, and designers of the Blackstone hotel and other down town skyscrapers, have been awarded the contract for planning the hotel. The first two floors will be of white Vermont granite. The nineteen stories remaining will be of red brick and white terra cotta.

The old Morrison was built in 1870, and in the early days was the most popular of Chicago’s hostelries. It still enjoys much of its old time popularity, the Boston Oyster house numbering 7,000 customers a day. 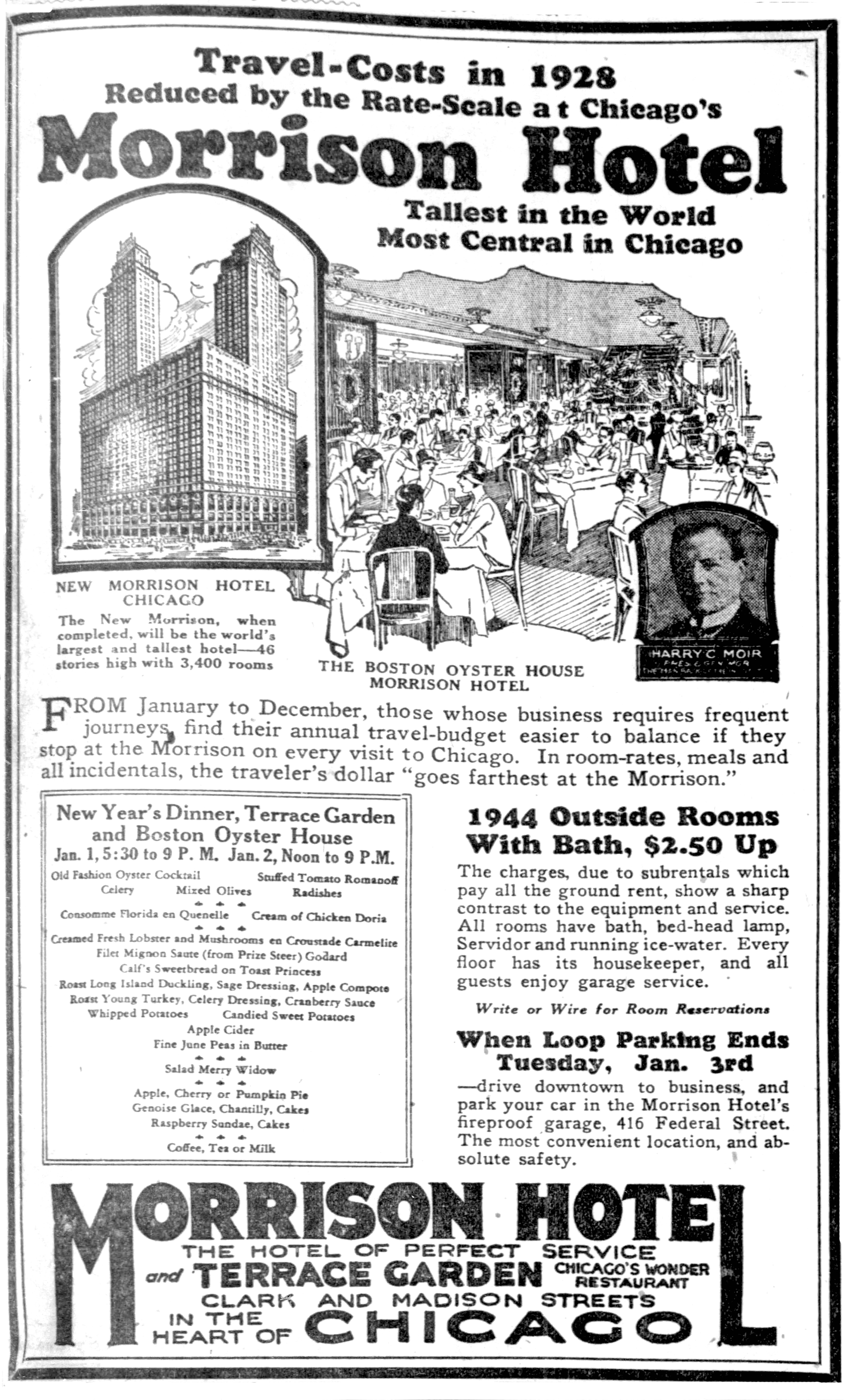 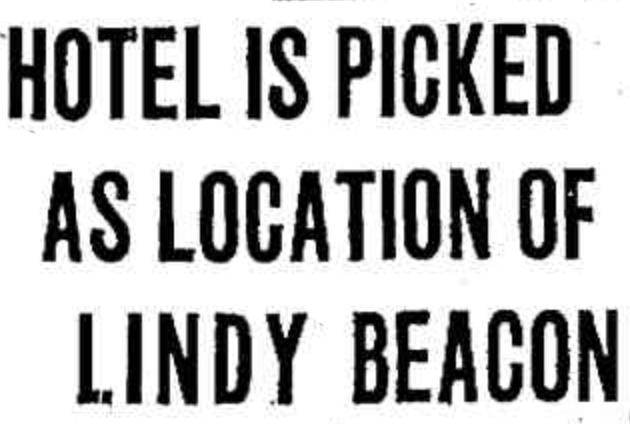 The Morrison hotel, one of the loop s tallest skyscrapers, was selected by Mayor Thompson’s radio commission yesterday as the building on which “Lindbergh Light,” the world’s largest aircraft beacon, should be erected.

In competitive bidding with five other downtown skyscrapers—the Pure Oil, Pittsfield; 333 North Michigan, Mather, and Straus buildings—the Morrison made the winning offer, Ald. A. J. Horan, a member of the commission, announced.

Harry Moir, proprietor of the hotel, agreed to Put up a 200 foot tower, pay the cost of installing the super-search-light, and maintain it, if the city wili furnish the auxiliary machinery. This would cost the city about $20,000.

Light Is Offered Free.
Elmer G. Sperry, president of the Sperry Gyroscope company of Brooklyn. at Mayor Thompson’s aviation congress last December offered to donate the light if mounted and maintained by Chicago. The offer wais placed in the hands of the aero commission which initiated the competitive bidding plan after deciding It would be Impossible to lift it high enough over the municipal airport.

According to Mr. Sperry’s description, the light will be visible to a flyer 250 miles away. It will have a 63 inch lens, several billion candle-power and at full strength will cast a beam of 1,000 candlepower per square millimeter or 100 candlepower brighter than the sun as viewed from the earth at noon on a clear day.

Aid. Horan presented the commission’s report to the mayor with a request that he refer it immediately to the city council with a recommendation that a contract ordinance be drawn up with the Morrison and the necessary $20,000 appropriation passed.

Invite Lindy to Dedication.
It will require two or three months to manufacture the light and several weeks to erect it, Aid. Horan said, but pointed out that work on the supporting tower structure could be started at once, so that the beacon could bo put in place early next summer.

Col. Charles A. Lindbergh, in whose honor the light will be named, will probably be invited hero for dedication. Aid. said. It Is hoped by that time also to have the proposed lake front airport completed so that a double ceremony may be held. 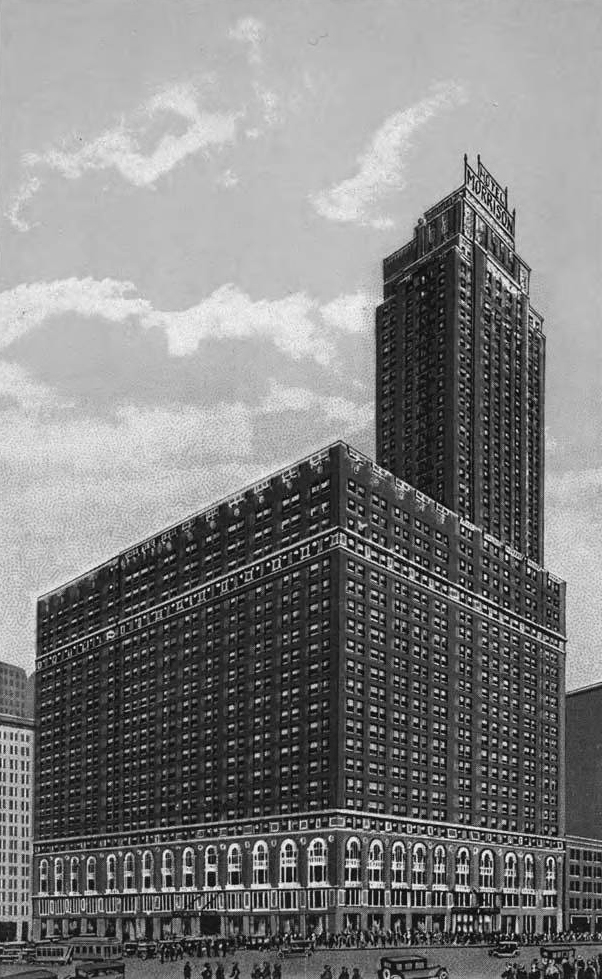 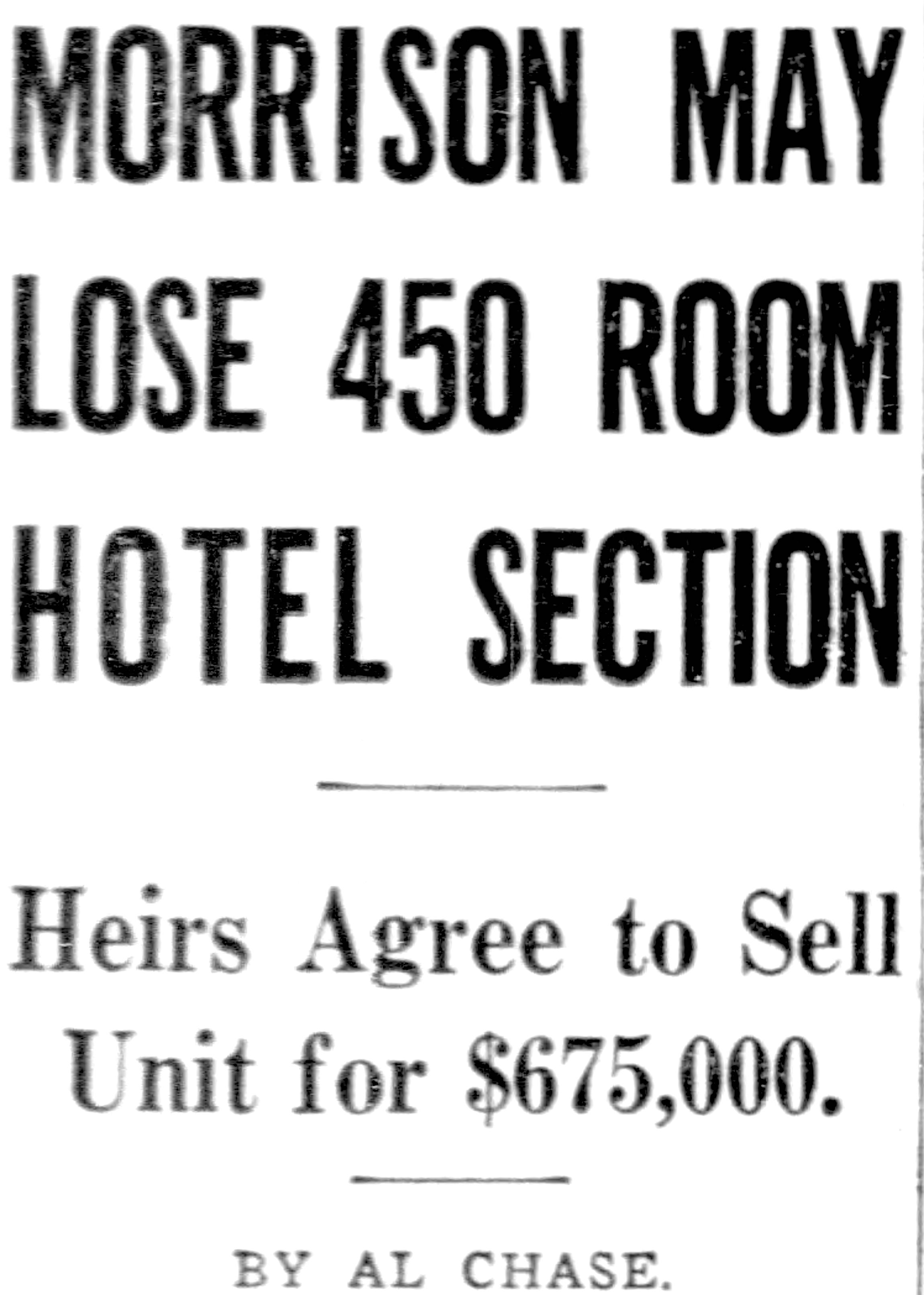 The 42-story Morrison hotel at Madison and Clark streets may soon lose a 450 room section of its building due to the hotel’s inability to pay back taxes of $200,000 one that section, it was learned yesterday.

One Section Already Lost.
The Morrison has already lost one of the sections. The 450 room unit at 67 West Madison, the last section built, was sliced off the building in 1937 to become the Hotel Chicagoan. All openings between this and the adjoining units were bricked up.

Yesterday the heirs of Jacob Rosenberg, who own the land under the original section built in 1911, agreed to sell this unit to the Chicagoan for $675,000 cash unless the Morrison pays the back taxes by Feb. 16. Total back taxes on the entire Morrison hotel units amount to about $700,000.

The unit which the Morrison may lose contains the main entrance to the hotel, the lobby, five banks of elevators, a coffee shop, power plant, and chimney. 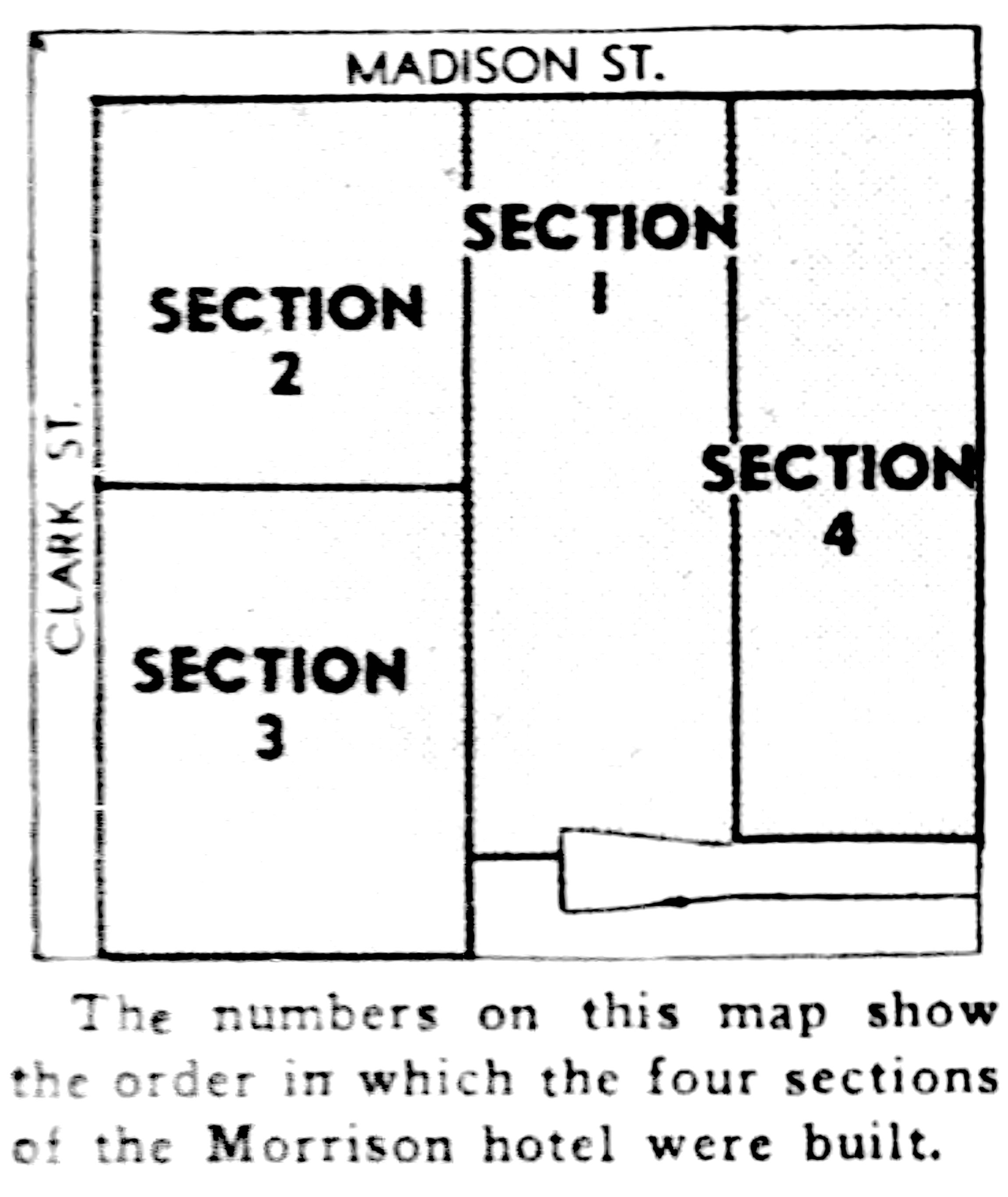 Lobby May Be Leased.
It was indicated that negotiations might be carried on later whereby the Morrison could retain the lobby and the utilities by leasing them from the Chicagoan. It would still lose 450 rooms, however, while the Chicagoan’s room capacity would be doubled to 900.

Land under the tower section is held by the Chicago Title and Trust company.

McCahey Heads Company.
James B. McCahey, president of the Chicago board of education, is head of the Morrison Hotel company which was organized to take over and operate the property.

The Chicagoan is owned and operated by the Hotel Chicagoan, Inc., of which John J. Mack is president. C. 0. Wallace and Harry Prince are prominent stockholders.

The Chicagoan is represented in the current negotiations by I. B. Perlman of the law firm of Sabath, Perlman, Goodman and Rein. Robert Becker and Frank D. Mayer of the law firm of Mayer, Meyer, Austrian and Platt are representing the Rosenberg heirs. 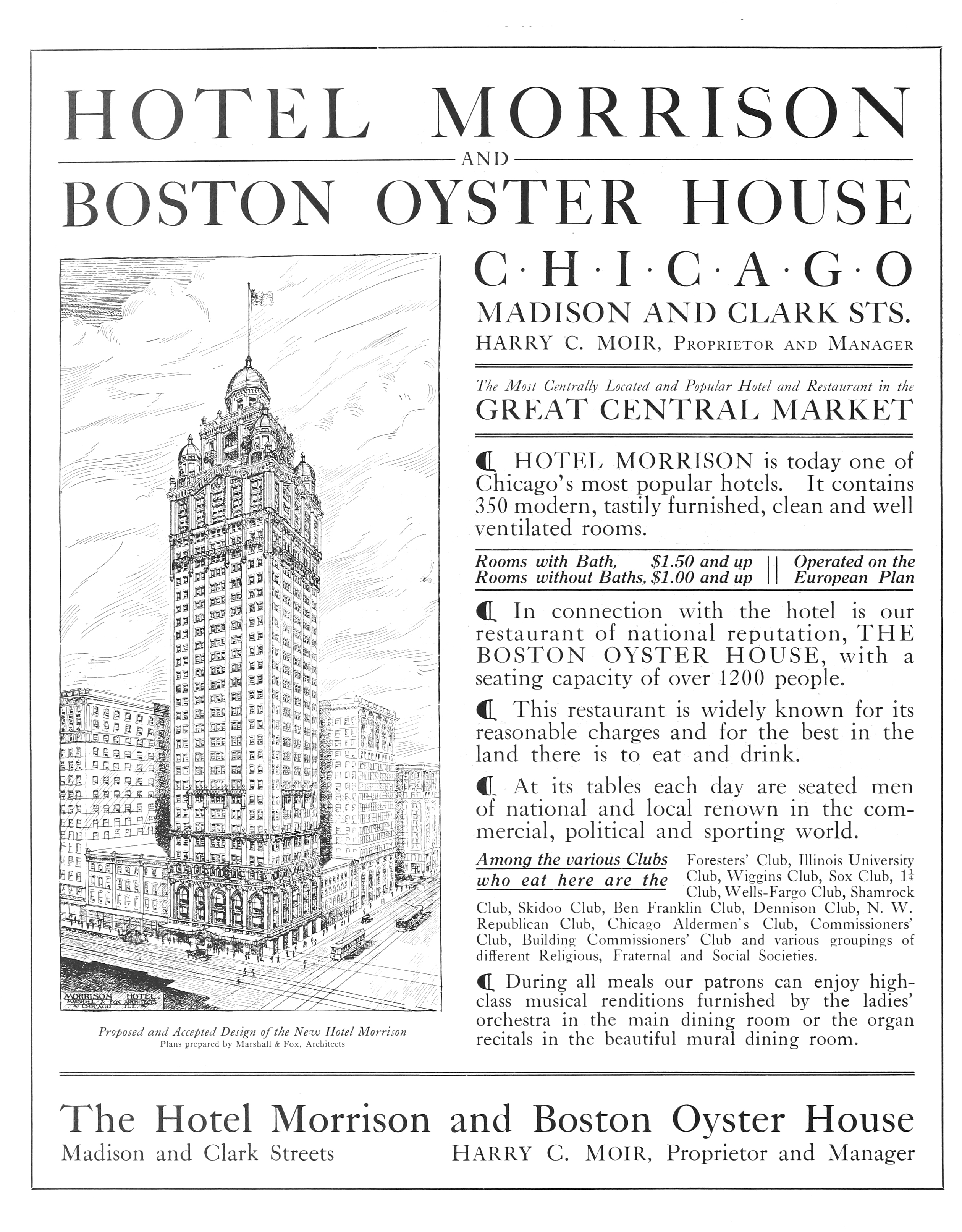 By Al Chase
The First National Bank of Chicago yesterday bought for 3 million dollars the 21 story Chicagoan hotel at 63-69 W. Madison st. and will use part of the building for an extension of its business. A bridge will be built across an alley to connect the hotel and bank buildings

The bank purchased the ground leaseholds and building from the La Salle National bank, as trustee. It bought the land under the Chicagoan hotel last year for $1,250,000.

First National will occupy for banking purposes the second floor formerly used by the Chicagoan as a lobby and restaurant, and the entrance and stairway from Madison st. to the second floor.

The proposed bridge, for which a permit has been issued by the city, will give a wide connection on the second floor between the present main banking room of First National and the newly ac- quired space.

Another Link Planned
It also is planned to connect the second floor space in the Chicagoan with the second floor of the Hartford building, at the Madison-Dearborn corner, which the bank already owns.

“The intention of the bank is to locate its foreign banking department in the new space in the Chicagoan, and probably its real estate loan department on the second floor of the Hartford building,” a spokesman said.

First National now controls thru ownership or long term leasehold all of the land in the block bounded by Madison, Clark, Monroe, and Dearborn sts.

The Boston Oyster House, at the corner of Clark and Madison Streets, offered no fewer than 42 oyster selections, divided among “select,” “New York counts” and “shell oysters.” In 1893, a dozen raw oysters were 25 cents. If you ordered the same dozen fried the price doubled. The most expensive were broiled oysters (60 cents a dozen with celery sauce, or 75 cents with mushrooms).

Also recommended by the guide: the oysters at Burke’s European Hotel, 140 Madison St., and Col. Wilson’s, a bar at 144 Dearborn St., directly across the street from the Tribune, that advertised “shell oysters” in 1880.

Founded in 1875, the Boston served as the training ground for Charles Rector, who went on not only to sell record amounts of fresh shellfish in his own restaurant, but also opened a branchin New York City that became equally celebrated. An 1893 menu from Rector’s lists about 20 cooked oyster preparations plus raw oysters from Rockaway, Blue Point and Shrewsbury.

But Rector’s greatest triumph was Cafe Marine on the grounds of the World’s Columbian Exposition in 1893.

The Boston Oyster House survived several changes of ownership and location until it foundered during the Depression.

More info can be found on the Morrison Hotel I page. 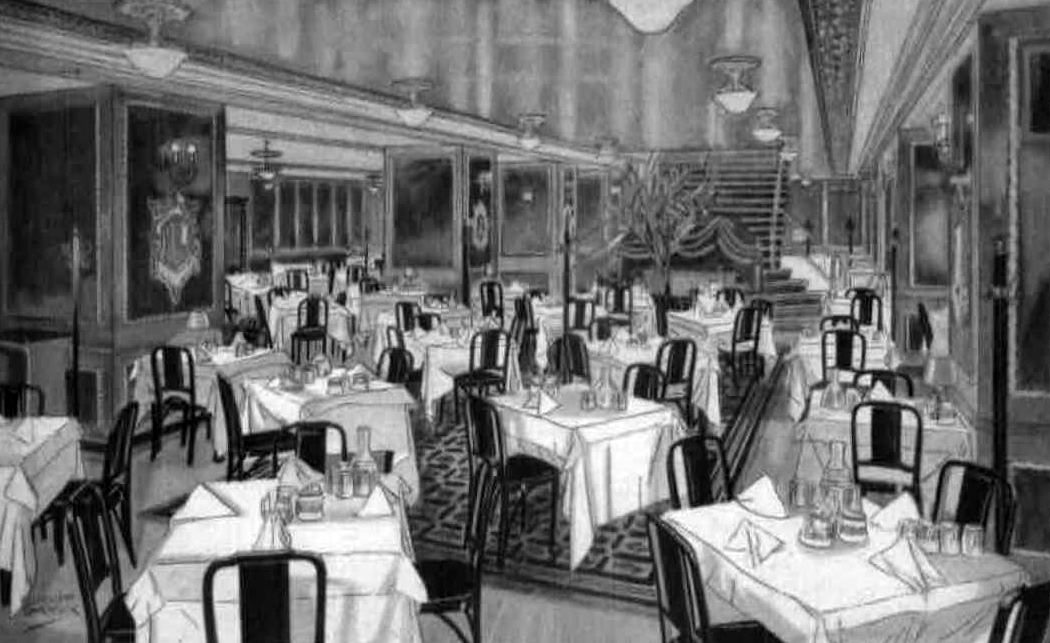 This hotel was razed about 1966 and One First National Plaza includes this site.