THE MORRISON BLOCK, CORNER OF CLARK AND MADISON STREETS, CHICAGO.
The building which we herewith present adds another to the already long list of elegant and substantial business edifices that have been erected in this city during the past season. It stands on the south-east corner of Clark and Madison streets, and presents an appearance to the observer that is not easily forgotten.

The building, just completed for occupancy, has been erected by the Morrison estate, under the supervision of G. W. Spofford, Esq., and the architects, Messrs. Carter and Drake. It is of white limestone, elaborately carved, with heavy cornices and projections, and is one of the most attractive business edifices in the West. The engraving shows its details so perfectly, that it would be useless for us to recapitulate them in the text, as the mind is much easier impressed by the sight. 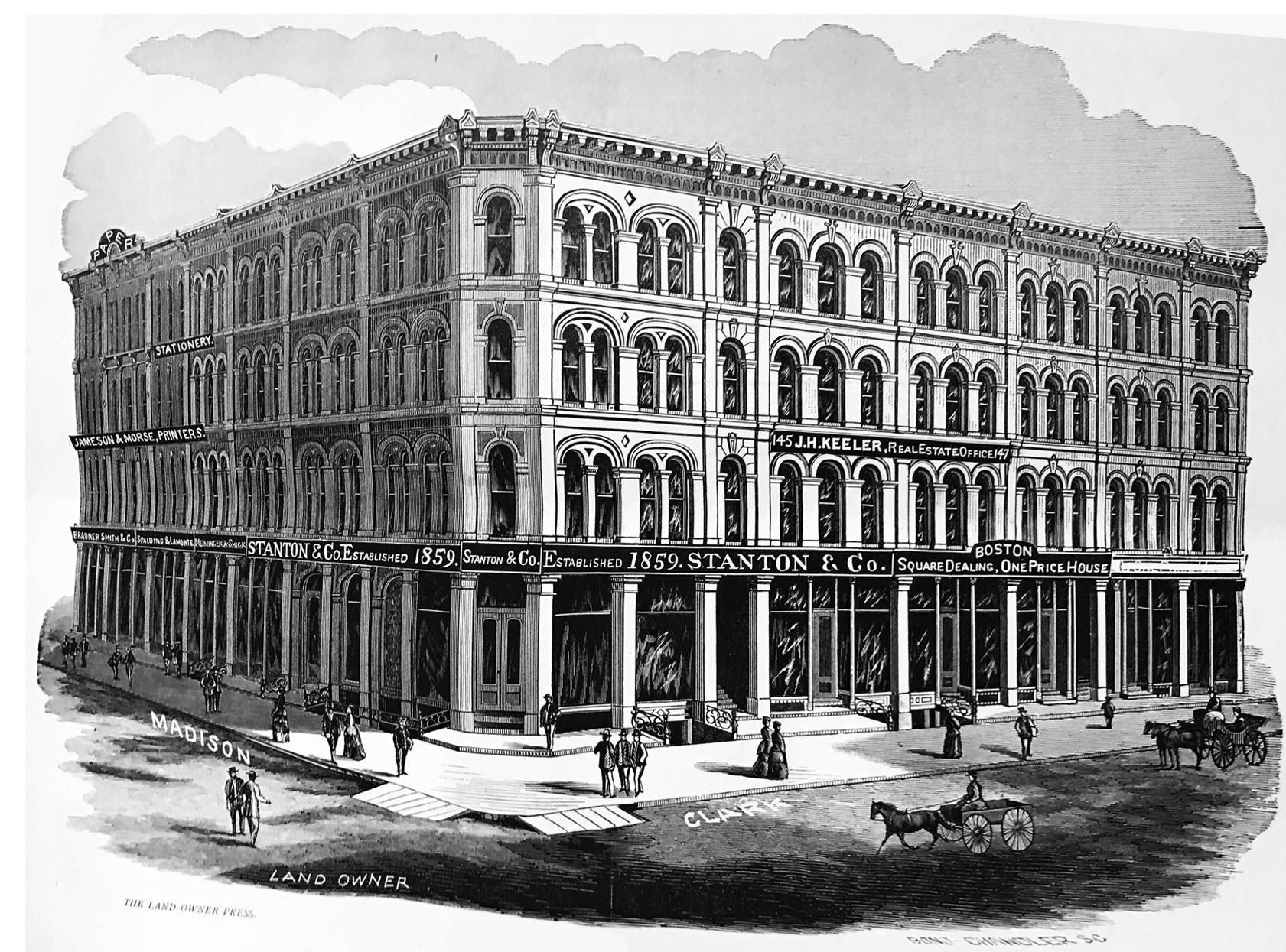 The building is now almost wholly occupied by the following well-known and substantial business firms:

Stanton & Co.
This favorably-known grocery house, which was first established in this city in 1859, occupies the large store forming the angle, which, to accommodate their extensive business, have all been thrown into one magnificent salesroom. It is fitted in black walnut of a very rare and unique pattern, at a large expense, and is without question the handsomest as well as the largest and best appointed retail grocery house in the country. It forms the third store of the firm, they having been long established at their old stands on State and Lake streets, which are kept in operation the same as before, this magnificent corner store was opened to the public.

Boston Square-Dealing One Price Clothing Store
The next store on Clark street is occupied by Messrs. Willoughby, Hill & Co., clothiers, who established themselves there early in October, last. This firm has branch houses in Toledo, Cleveland, Buffalo, Albany, Troy, New Haven, Bridgeport, and other cities. They manufacture yearly over two million dollars worth of men’s, youths’, and children’s clothing. Last year they made up over 700,000 different garments, often consuming all the goods manufactured by certain mills for three to six months at a time. They have in all a chain of twenty-two stores, and have established a name for dealing that is its own precursor of success.

Messrs. Bradner, Smith & Co.
Passing around the block to the Madison street side, we find another new edifice adjoining it on the east, erected at the same time by Mr. Rosenberg, a capitalist of Chicago, and corresponding with the Morrison block in appearance. Here is an immense double store, 192×45 feet, occupied by Messrs. Bradner, Smith & Co., a well-known paper house. This firm was established on LaSalle street in 1854, from which time their business increased to such an extent that their removal was necessitated last fall to their present elegant and commodious location. Their basement is 210×45, and is used for the storage of manilla, tea, straw board and other descriptions of wrapping papers, in which they deal. Their store is without doubt the best appointed in this line of business in the country. Their upper floors are devoted to the storage of goods in cases, and contain an immense stock of cardboards, wrapping and printing papers, twines, envelopes, etc. This house manufactures the celebrated Winnebago and other papers for mercantile, express, hardware, stationery, book and printing purposes, and being strong in capital and resources—having control of several mills exclusively—they enjoy a large and constantly increasing trade.

Spaulding & Lamonte
The next store west, No. 114 Madison street, is occupied by Messrs. Spaulding & LaMonte, printers, stationers, and bookbinders, recently removed from 128 Lake street. Their press room in the basement is 185 feet long, and contains sixteen steam presses, two of which are as large as there are in the West, and especially adapted to fine colored and cut work. They also have job and book, composing and bindery rooms, employing about 100 men in their various departments. Besides their large blank book and stationery business, this firm print a large number of regular newspapers and magazines for the publishers, among them The Little Corporal, The Western Home, The Pharmaceutist, etc. 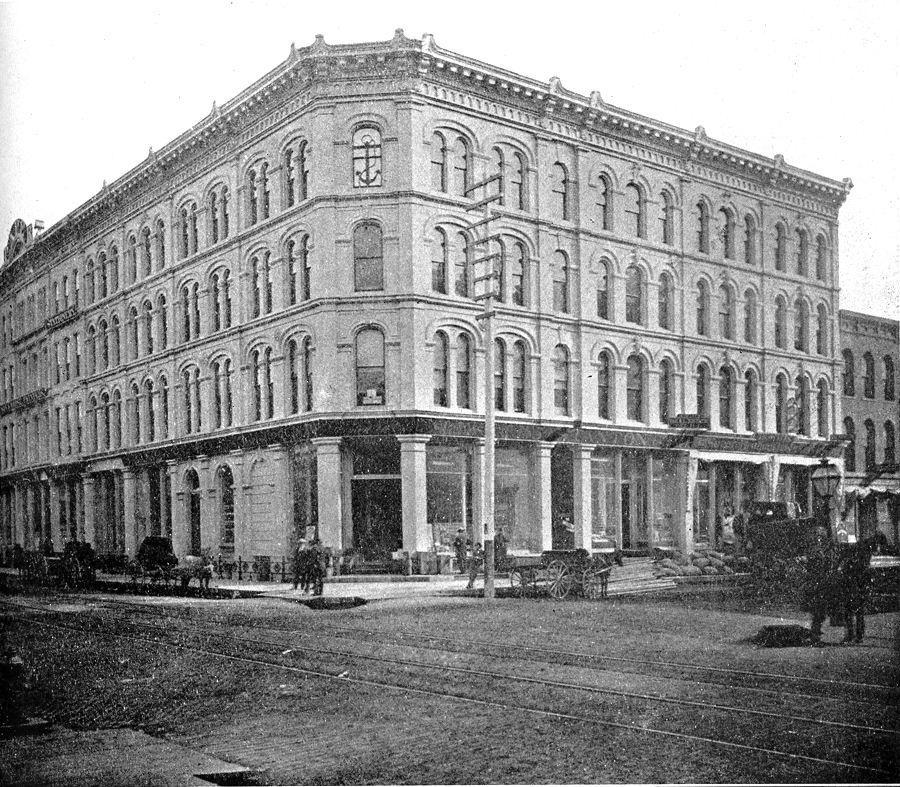 Messrs. Jameson & Morse.
Prominent among the many excellent firms occupying the new block is that of Messrs. Jameson & Morse, book and job printers, well known as one of the oldest firms in that line of business in the city, having been continuously under one management since the spring of 1856. Since their removal from La Salle street their facilities have been considerably increased, by the addition of new and improved styles of type and new machinery, while their rooms are ample, and as well adapted to business wants as any in the West. Banking, insurance, railroad, mercantile, and legal printing are given special attention, while other varieties are not neglected by them.

Real Estate Offices of Jas. H. Keeler.
On the second floor, entering from Clark street, is located the real estate office of Jas. H. Keeler, No. 145 Clark. Mr. Keeler has one of the finest real estate offices in the city, and does a large business in lots and lands, collecting rents, negotiating loans upon city property, managing estates, etc. His location in the new block will appear from the sign. Non-resident property holders should correspond with him.

Enhancement of Real Estate.
The erection of such a block as this has greatly enhanced the value of property in its vicinity, while its fine class of tenants has entirely changed the character of the neighborhood, and revolutionized real values for several blocks around.

Our engraving represents the entire structure on Clark street as it will appear. The last store south has not yet been completed.

Site of Morrison Block, and other buildings owned by the Morrison family
Sanborn Fire Insurance Map
1869