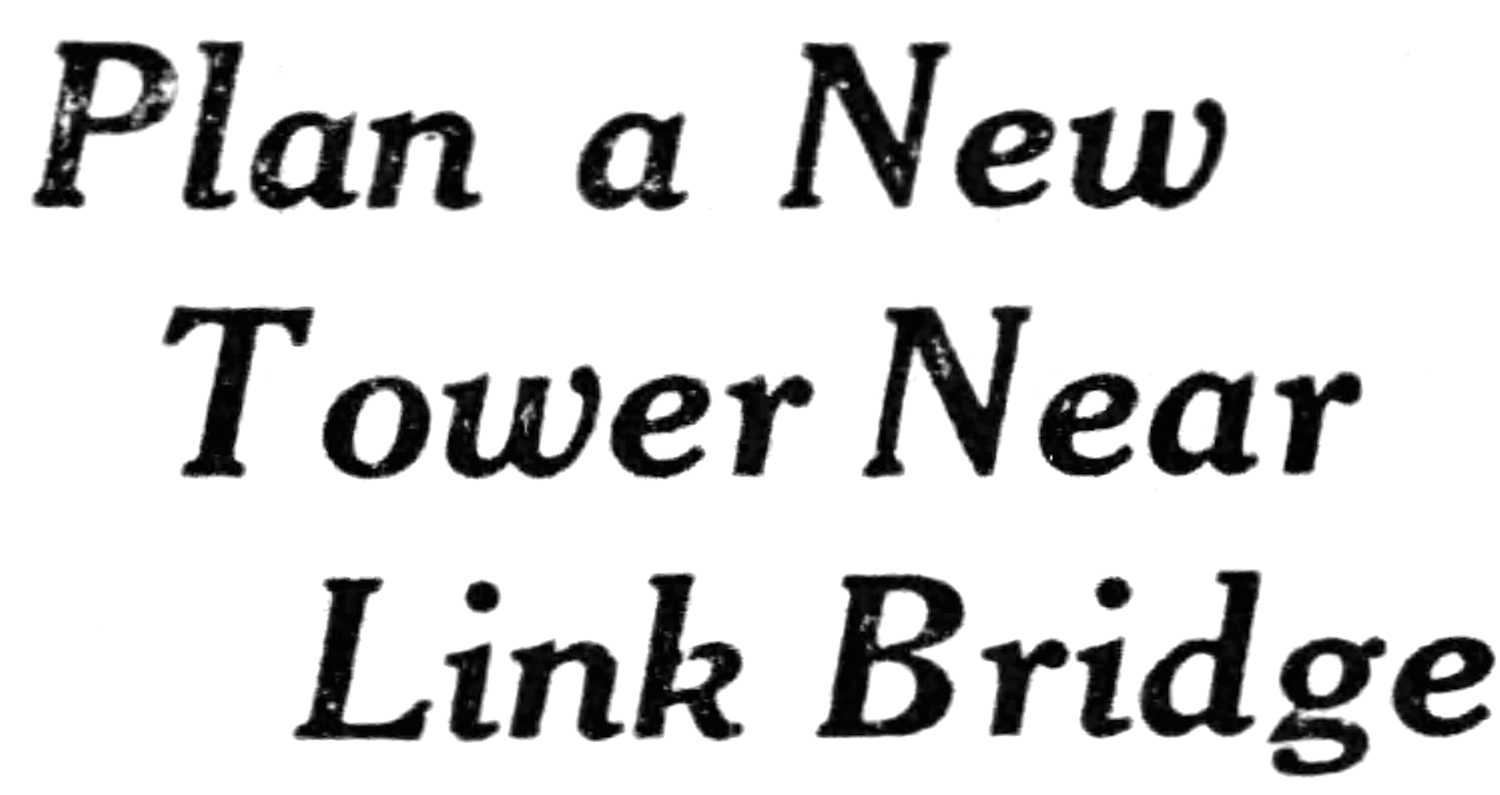 BY AL CHASE.
A “hardware tower”—the tallest and largest building in the world devoted to the wholesale hardware business—to cost several millions and to be sixteen stories tall, is to be the newest addition to Michigan boulevard bridge skyscraper colony, according to Frank Hibbard, vice president of Hibbard, Spencer, Bartlett & Co.

This huge structure, 464 feet long and 120 feet wide, is to erected at 219 East North Water street and the north bank of the Chicago river, from plans by Graham, Anderson, Probst & White.

The site now is occupied by an old four story warehouse which will be wrecked to make way for the skyscraping hardware tower. The property is 300 feet east of the Kirk soap factory on a diagonal from Tribune square.

This announcement by Mr. Hibbard will answer the question which has been asked repeatedly since the carrying out of the South Water street boulevard project was assured:

Where will Hibbard, Spencer, Bartlett & Co. go when they tear down their ten story building at State Street bridge?

As this big structure was the only large, modern building in the path of the river boulevard, the delay in announcing the new site for the company had caused a little uneasiness to the Chicago Plan commission. 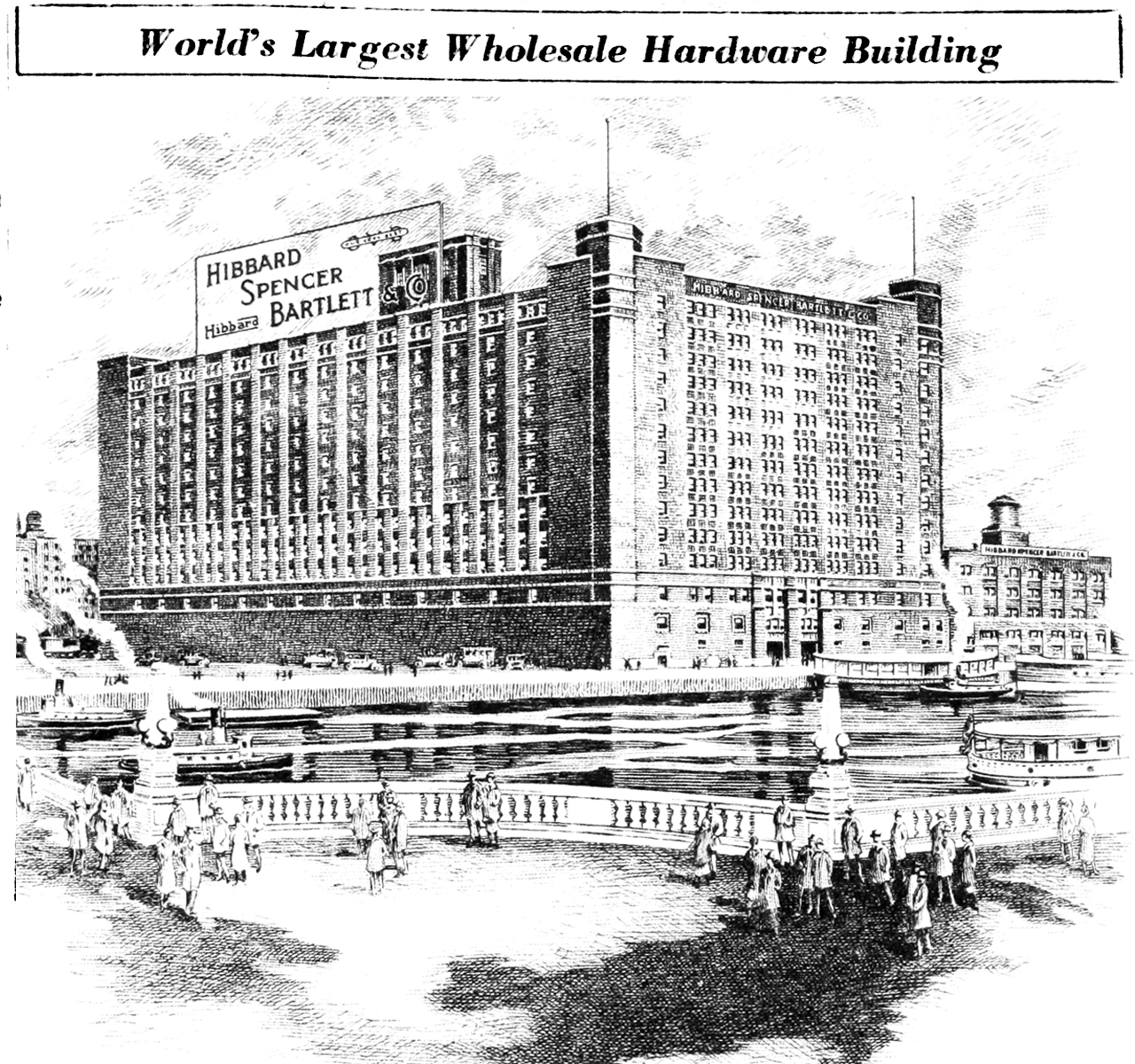 Contracts have been let for the steel and work is to be rushed on the above thirteen story $4,000,000 office, warehouse, and wholesale building of Hibbard, Spencer, Bartlett & Co. on East North Water street and the river, about 128 feet east of the Kirk soap factory and diagonally across from Tribune square. As soon as this is completed wreckers will begin tearing down their present building at South Water street and State street bridge to make way for the new double deck boulevard.

Graham, Anderson, Probst & White’s plans call fir face brick elevations overlooking the river and North Water street. The west wall, which eventually will be hidden by some structure adjoining, will be of ordinary brick, but the bleakness of the ordinary party will be relieved somewhat by the use of panels. This wall will have windows which will be bricked up when the property adjoining is improved.

The site, which was purchased through Albert Wettes & Co., fronts about 185 feet on the river, 172 feet on North Water, 423 feet on the east and 335 feet on the west. The building will contain more than 1,000,000 square feet of floor space. The upper floor will be used for the general offices of the firm. The next floor below probably will be used for recreational features, and later the roof may be covered with tennis courts, etc.

All the activities of Hibbard, Spencer, Bartlett & Co. will be housed in the new building, and the present warehouse adjoining the new building on the east will besold. This will be the largest building in the world, it is claimed, devoted exclusively to the wholesale housing business and kindred lines. 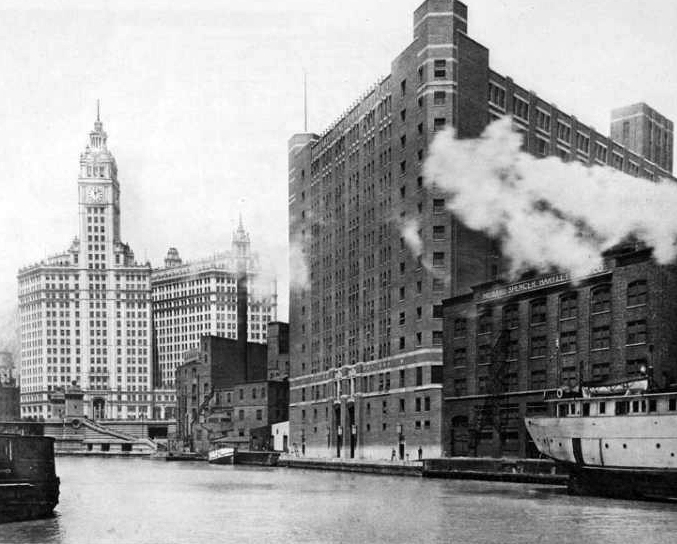 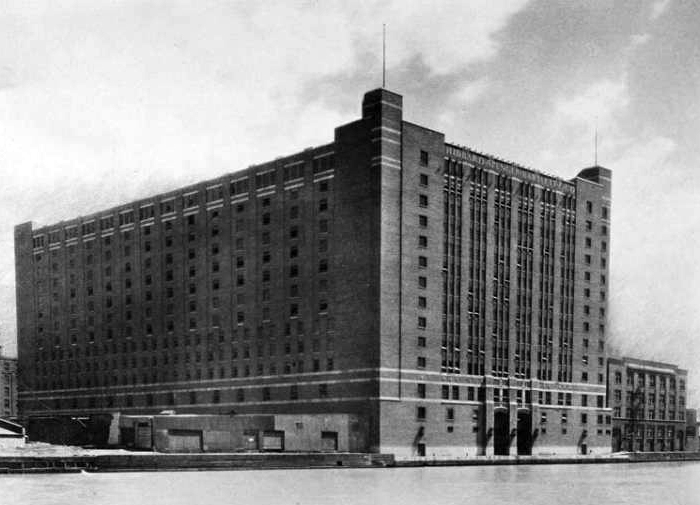 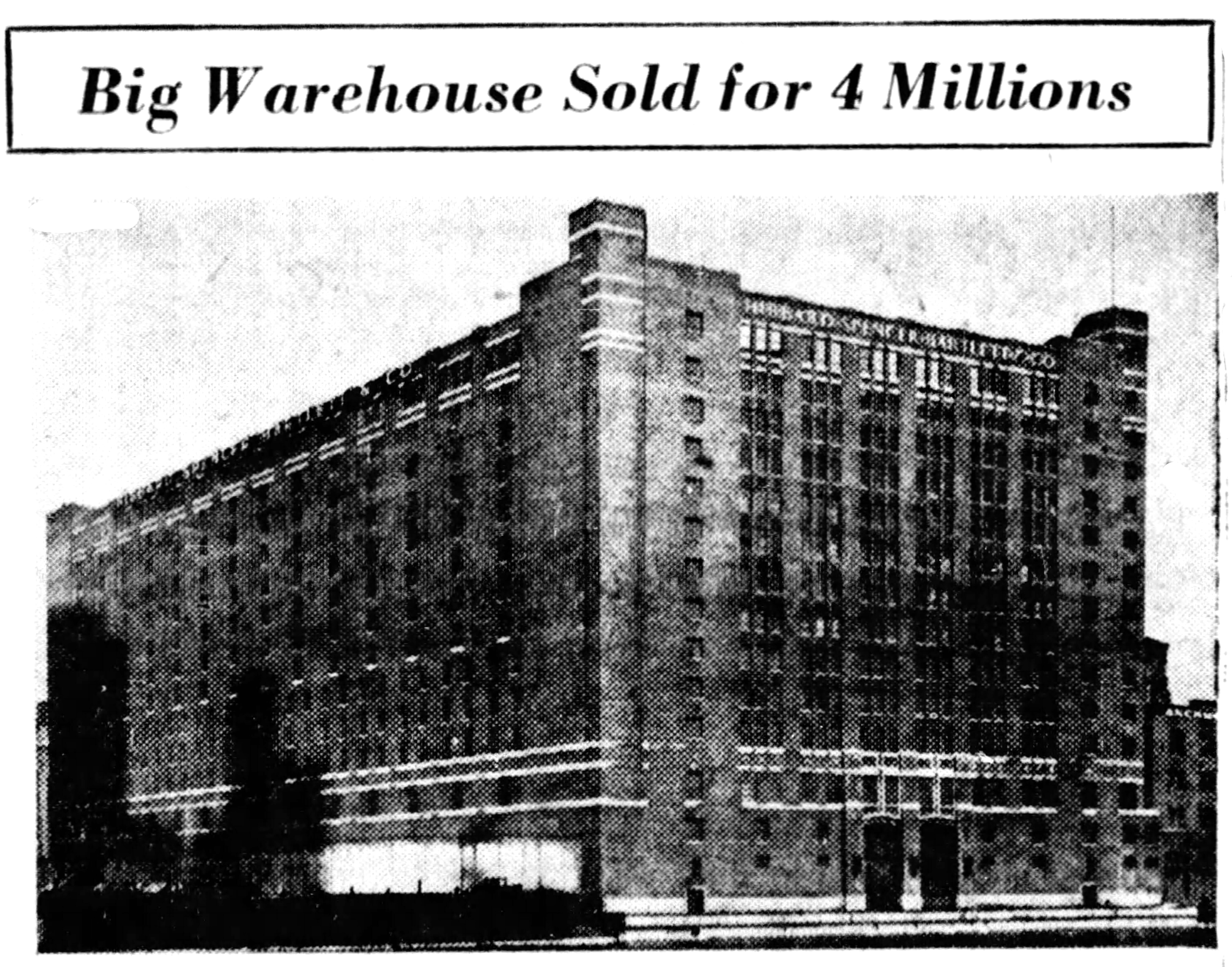 Large Hibbard, Spencer, Bartlett & Co. warehouse on the Chicago river near Michigan av., which was sold to a New York realty syndicate for 4 million dollars. 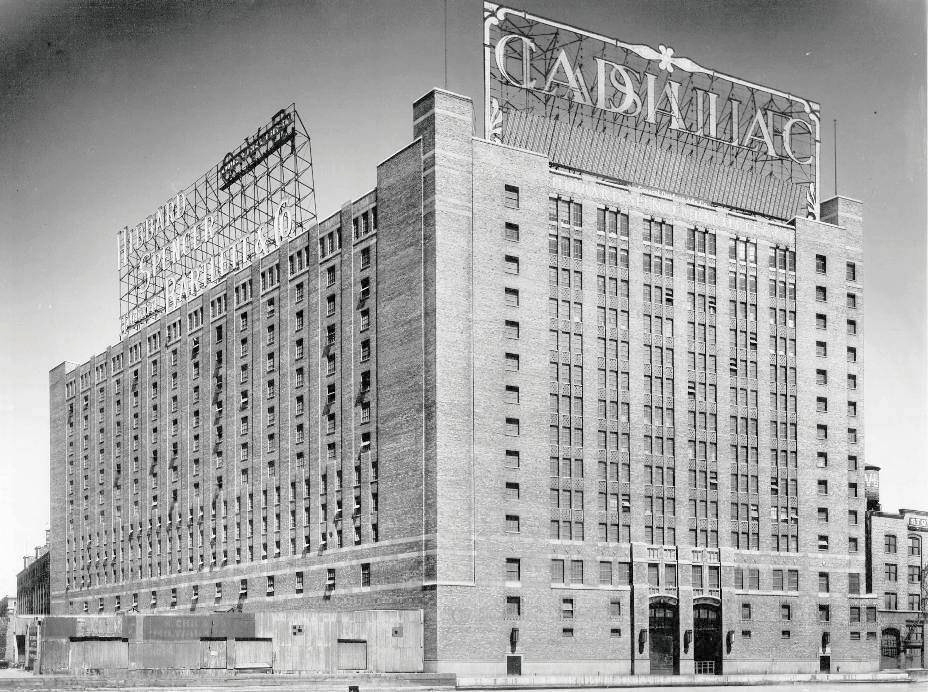 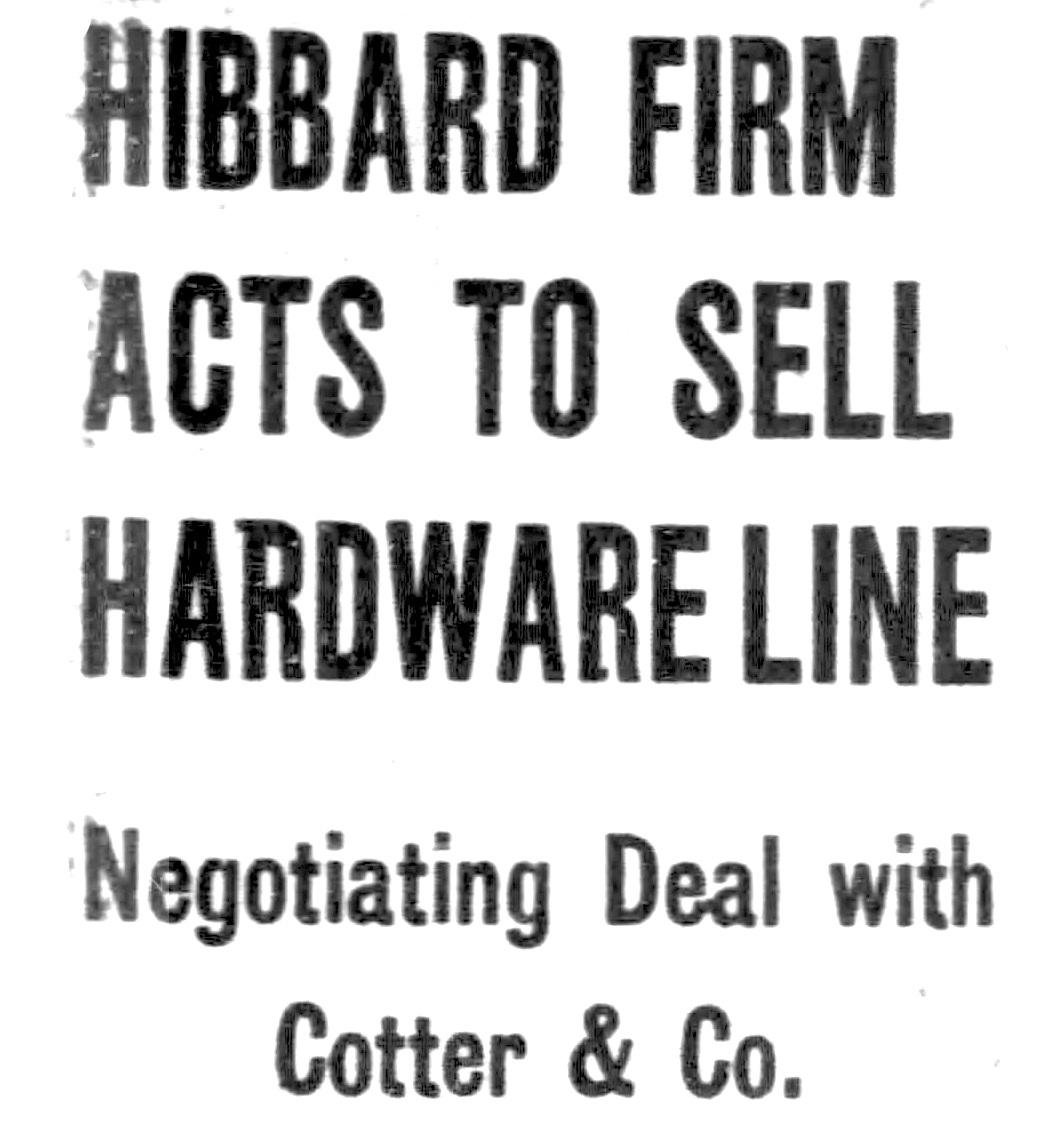 BY HARRY ADAMS
Hibbard, Spencer, Bartlett & Co. is destined to fade from the wholesale hardware business at the first of the year after a span of 107 years. It then is scheduled to become a real estate and investment firm.

Announcement was made yesterday that Hibbard had agreed to sell all its inventories and certain of the accounts receivable and other assets of its hardware division to Cotter T-V Hardware company, 2740 Clybourn av. Cotter T-V is a wholly owned subsidiary of Cotter & Co., the country’s largest dealer-owned hardware wholesaler.

The sale is subject to approval by shareholders of Hibbard, Spencer at a special meeting to be held Dec. 5. The sale is scheduled to be consummated Jan. 2.

Cotter said that Cotter T-V Hardware company will operate after Jan. 2 as the True Value division of Cotter & Co. and will continue to serve a selected group of Hibbard’s retail hardware dealers.

Lease Warehouse Space.
As part of the proposed takeover of the Hibbard hardware division assets, Cotter will lease about 280,000 square feet of space in Hibbard’s warehouse at 2300 Brummel pl., Evanston. Cotter also will acquire the leasehold interest in Hibbard’s St. Louis warehouse.

Ahl said Hibbard, Spencer had decided to discontinue its hardware business at the end of the year.

The executive said that the sale of the hardware business was “a difficult decision.” He said the company had not been able to make a satisfactory profit on its investment in hardware. 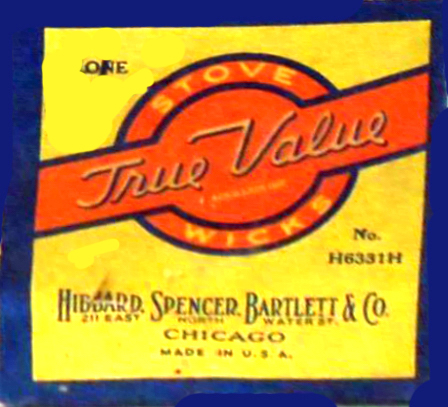 Not Losing Money.
Hibbard, Spencer, which was formed in Chicago in 1885, actually was not losing money on its activity in hardware, but, Ahl, no possibility of an improvement in profits foreseen.

He pointed out that many items of merchandise, formerly handled by retail hardware stores, now were being channeled thru other avenues of distribution—sale of housewares in grocery stores and the sale of garden hose in drug stores being examples.

Hibbard, Spencer’s balance sheet shows holdings of $1,750,000 in common and preferred stocks. Its real estate holdings include its 800,000 square foot building on Brummel place in Evanston, the Popular Mechanics building, 200 E. Ontario st., and two warehouses in Chicago. The company also has real estate holdings in Detroit and LaCrosse, Wis.

Cotter & Co. was founded 15 years ago by John M. Cotter. Its sales have grown from less than 1 million dollars to an estimated 31 millions in 1962. It services, from Chicago headquarters and a branch in Cleveland, 750 independent hardware stores in the area from the western boundary of Kansas to upstate New York. 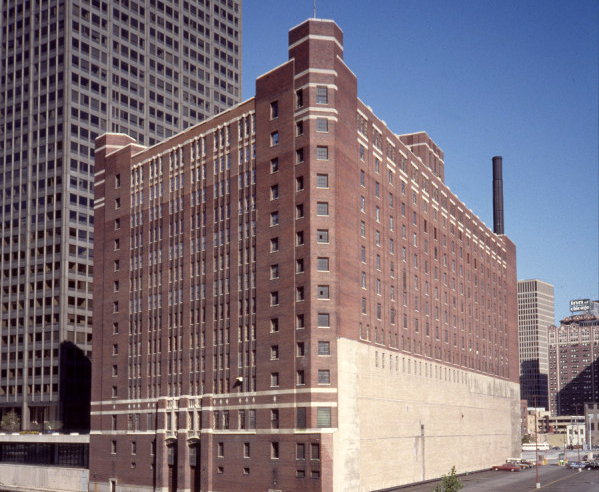 On January 2, 1963 Hibbard, Spencer, Bartlett & Co. was sold to John Cotter & Co. for $2 million. The building served as a temporary location for the Chicago Public Library before the Harold Washington Library was completed. The Gleacher Center (University of Chicago Graduate School of Business) now stands on the site.