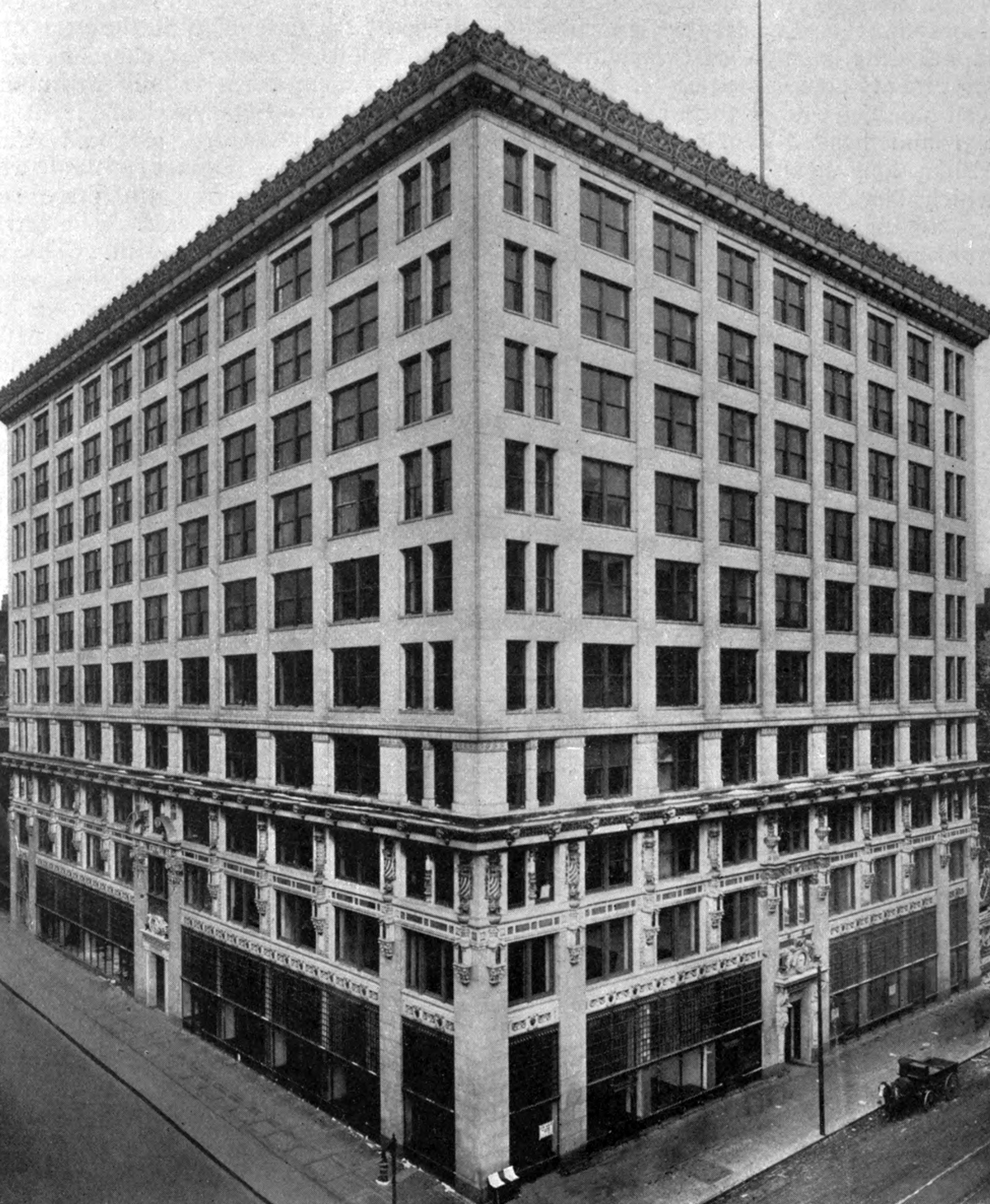 This structure is located at the northeast corner of West Madison and Market streets, and is a thoroughly modern, ten-story, fireproof building, having a frontage of 137 feet on Madison street by 189 feet on Market street.

This building was erected on the most approved lines of modern construction. Its foundations are entirely of the caisson type, going down 102 feet and resting on bed-rock.

The exterior finish of this building is of white enamel terra cotta and the walls of the main lobby are of polychrome terra cotta, treated with gold bronze frames and sash. The elevator grilles are of gold bronze in elaborate designs. while the corridors of the upper floors are broad and spacious, well lighted and ventilated, and treated in a pleasing manner.

There are six modern, high speed electrical elevators of the “Traction” type and two freight elevators that provide the best of service in this department of the building.

A commodious retiring room and lavatory for ladies is on the sixth floor, and the men’s lavatory and toilet and a barber shop are on the fifth floor.

The building was provided with the most modern facilities for heating and lighting and a vacuum system for cleaning is installed in the building.

The building has a large light court, 50 feet by 75 feet. Chicago Herald and Examiner are located in this building.

The building was also known as the Chicago American Building. 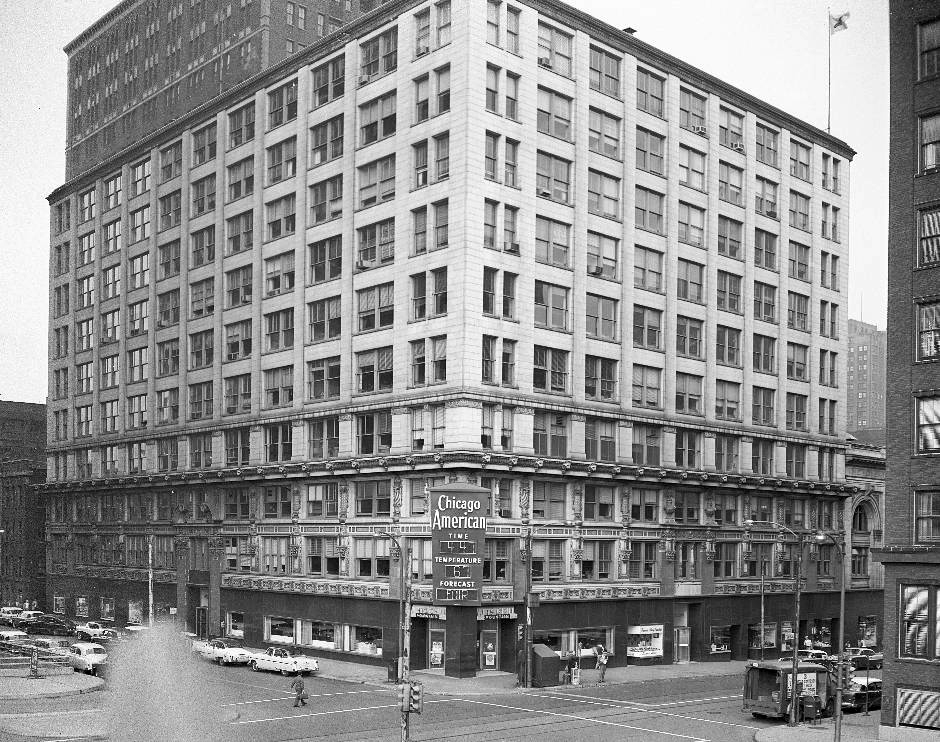 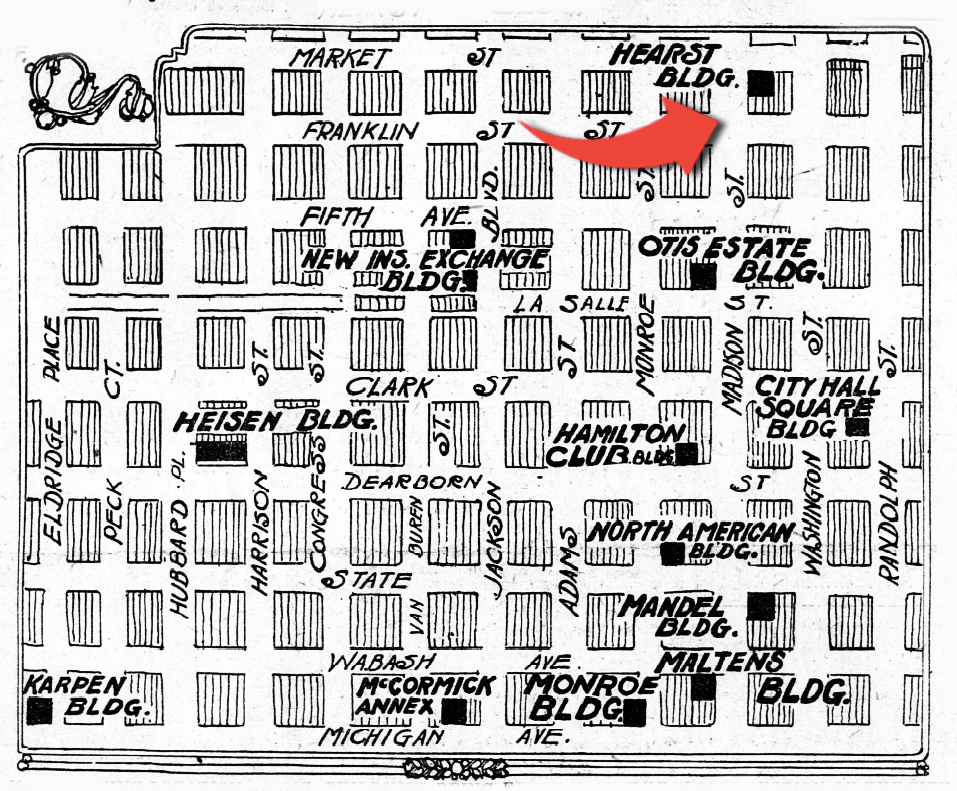 SOME PEOPLE SAY that the design of the skyscraper is settled, in all essentials, that it is established as a “type.” Others as vehemently contend that what has been done hitherto in the design of tall buildings with metallic frames is provisional and tentative only, that there is nothing definitive about it. The “strict constructionist” cannot be pleased with a building that does not show its construction and exhibit its material. He will pooh-pooh the relevancy and validity of the current convention that the skyscraper should emulate the columnar division into base, shaft and capital. He has even been known to deny the postulate of the Father of Criticism that a work of art must have a beginning, a middle, and an end. There is another class of critics, who may be the same persons, who hold that the analogy of nature should be followed, not only in securing that decoration shall proceed from structure, but also in securing that structure shall proceed from function.

Perhaps the ultimate trouble with the commercial skyscraper is that, being by its magnitude, or at least by its altitude, a most conspicuous structure, it is yet devoted to the humblest and most prosaic purposes. Monumental by its dimensions, it is severely utilitarian by its requirements. There is no monumental idea expressed in it, or expressible by it. It consists of a series of cells in which the occupants do not properly live, but only, properly or improperly, get their livings. The only natural analogy to it is that of the honeycomb, where the “workers” at least sleep and feed, do something else, in fact, than make and store their honey. If the human workers did that, they would give more opportunity for specific and effective architectural expression. In other words, there is more of such opportunity in a skyscraping apartment-house than in a skyscraping office-building. There may be a difference between the apartments. There must be a difference between the rooms of the same apartment, according to their several purposes. These differences are architecturally expressible. But in the office-building the purpose of every subdivision is the same, and functional expression gives no scope for variety of treatment. The offices are all equal cells of the honeycomb. 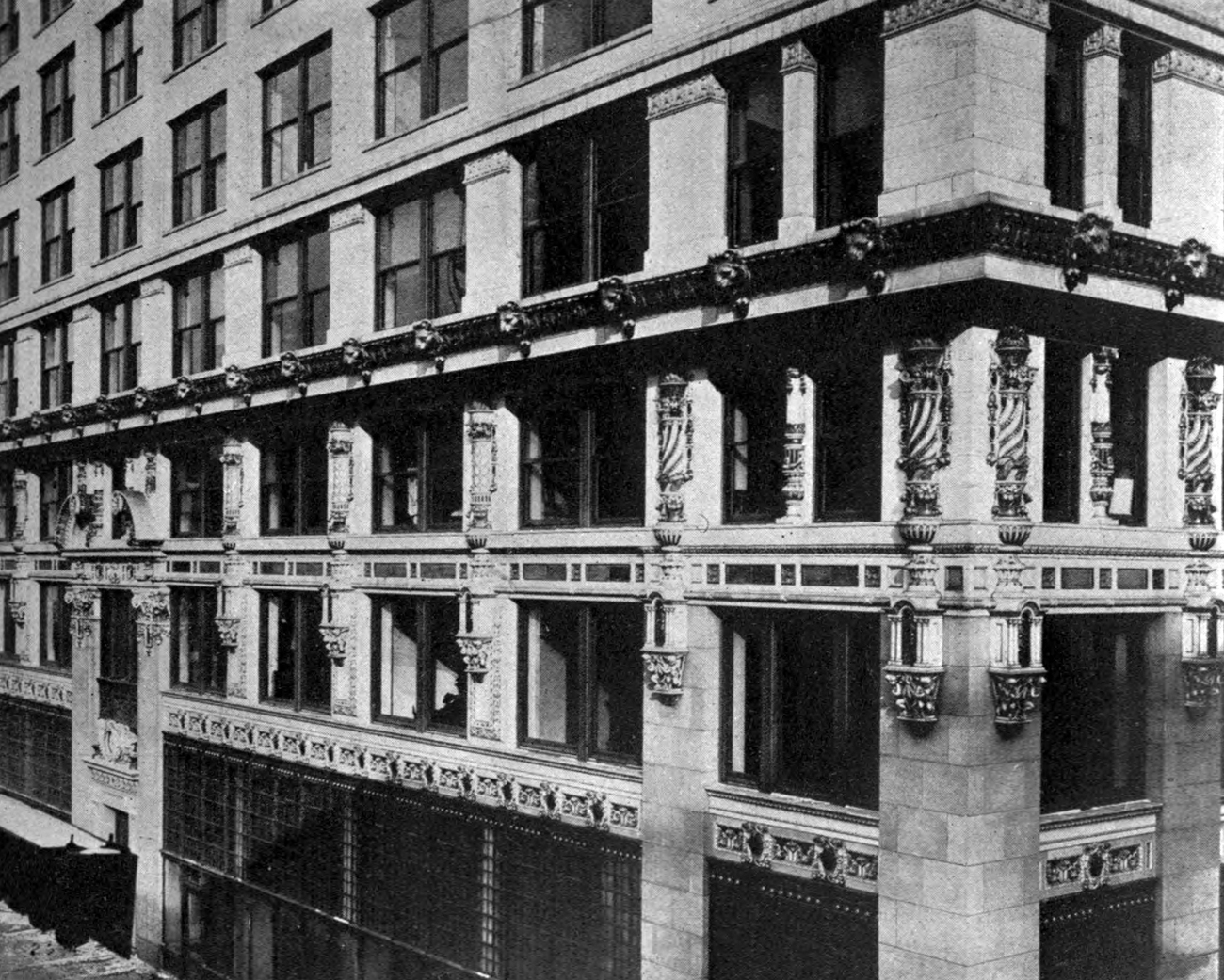 It is true that the designer of the honeycomb, to wit, the busy bee, may detect and provide for differences of function. So he does when he lays out his combined apartment-house and office building. The male bee, being a drone, or “clubman,” and reduced to the sole functions of consumption and propagation, is accommodated accordingly. The female worker, analogous to the clubmans’ wife who goes out sewing or takes in washing, is separately provided for in apiarian architecture, while the queen-bee has constructed for her a “royal cell.” Here, you perceive, is a natural analogy for the case of an “institution” which builds primarily for its own accommodation but incidentally provides stowage for a swarm of “workers.” In some cases this process seems to be reversed, and the structure to be erected primarily for the revenue derived from the workers, and only incidentally for the transaction of its own proper business. Such a building offers a chance for differentiation at which an architect ought to jump. His “institution,” his “royal cells” would naturally be at the bottom of the building or else at the top. Sometimes both, as in the case of a respectable newspaper-building, by which we do not necessarily mean the building of a respectable newspaper, though in this case it happens to be both, erected in St. Paul, Minnesota, some twenty years ago, that is after the advent of the elevator but before that of the steel frame, and thus limited to a modest twelve stories, of which the lowest is given to the counting-room, and the upper two to the editorial and typographical departments, the intermediate stories being available for rental. Here the Aristotelian demand fulfills itself without putting the architect under the necessity of making a factitious division, or even of hunting for a division, but only of recognizing a division that exists.

The “layout” of this building in St. Paul is, or might be, apparently, the layout of the Hearst Building in Chicago. But one looks in vain for any recognition on the part of the architect of the facts in the case. Looking at the building as a whole, it might be any sort or condition of a commercial building. It might be an office building, and then again it might be a department store. It is true that the Chicago convention of utilitarianism and practicality is followed in the disposition and the forms of the openings. That is now become almost a matter of course everywhere. Times are changed since a New York architect designed an office building consisting of tiers of two-story orders. The enclosure of two stories in one Order seemed to the beholder to be a device for giving the building scale, but it appears it was a device for avoiding the presentation of the actual windows as squares or nearly so, which resulted from the construction, and for presenting them as, the conventional oblong. It was an unworthy object and an ineffectual device, the proof being that the fenestration of the unregarded sides and back of the edifice in question, where the windows are left to assert themselves as squares, is more grateful to the view than the considered fronts, in which they are presented as “uprights” by an overlaid trellis of two-story orders. It is not on architect shows himself unable to reconcile the discrepancies arising from the conflict of the exigencies of construction and the exigencies of occupancy. That is what it would look like if it were left to itself. But in an evil hour the constructor undertook to be also a decorator. We have seen that his departures, in the interest of architectural expression, from the nakedness of his utilitarian scheme, instead of cloaking its nudity, add absurdity to it. Absurdity is also, unfortunately, the “note” of the decoration. Excepting at the top. The strict logicians have ceased to put cornices on their skyscrapers, seeing that the rainfall on the roofs is in fact discharged inwardly and not outwardly. 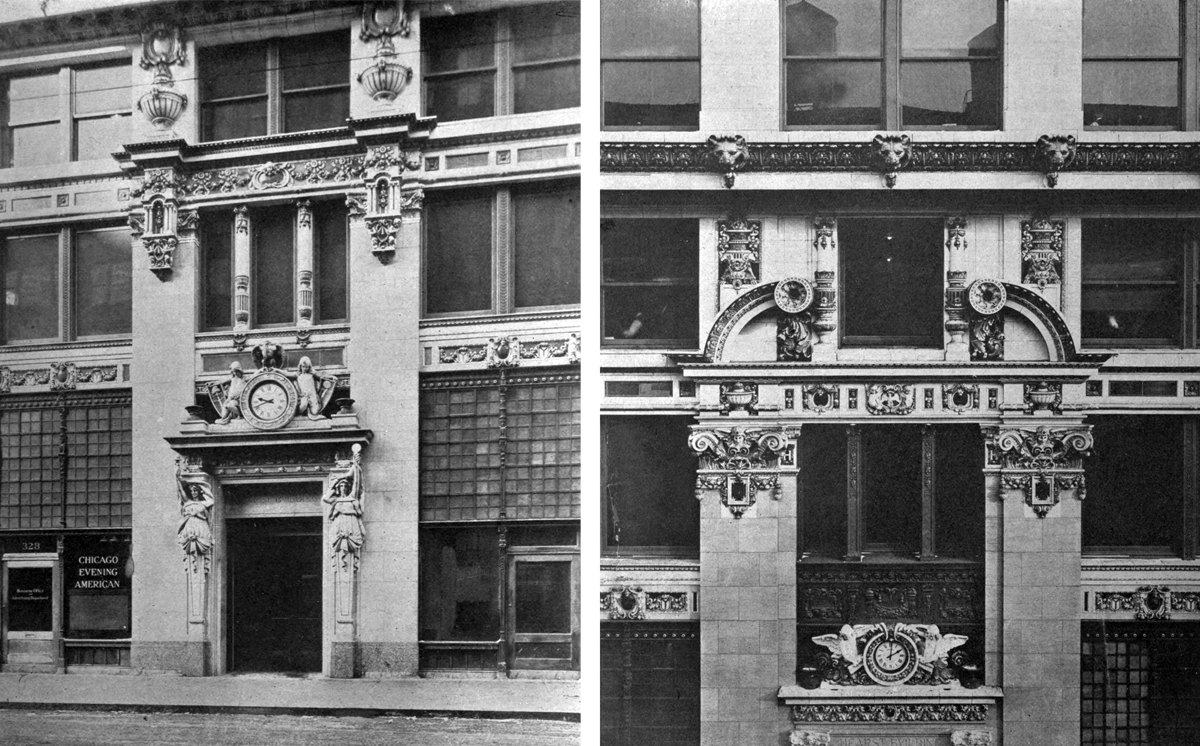 Nevertheless, we may admit that a cornice, “in the present state of the art,” “tolerari potest,” if it be of moderate projection, and do not pretend to be a shelf projecting over and supported by a massive wall of the same material which does not exist. Also a parapet can be tolerated. It has a conceivable function in preventing the unwary from falling off the roof. The ornamentation of the present parapet is, abstractly, good, good in division, good in scale detail, and good in scale. But it is so rich and elaborate that it is in glaring contrast and contradiction of the wall underneath, which it makes to look balder than ever, while the baldness underneath makes itself look finical. It is a “purple patch” on a coat of frieze. Still, the decoration of the top, incongruous as it is, is by no means so bad as the decoration at the bottom, the lower three stories, the show-rooms of the department store. This section is decorated by a highly elaborate doorway at the centre of each of the visible fronts, by what we may by courtesy call colonnettes on the face of each of the upright posts and also on each of the mullions of the subdivisions of the bays at the corners to which we have already referred as standing on nothing. Much of the detail of this decoration is refined, some of it even “elegant.” But it is all, by its profusion, even more open to the objection of incongruity that we have made against the parapet than is the parapet itself. It is open to a graver objection. We have admitted that the parapet conceivably had a function. But none of this has any conceivable function. It has absolutely nothing to do with the case. Not a bit of it is “decorated construction.” Every bit of it is constructed decoration. The ornamental doorways are painfully squeezed in between the uprights, in a space evidently too narrow for them, and the uprights themselves are interrupted, in one case by crowning them, at the level of the mezzanine, with voluted capitals, in the other case with what may by courtesy be called corbels, projected to carry the projection of the entablature, projected “ad hoc.” But the most absurd and irrational detail is that of what we have called the colonnettes incrusted upon the uprights. These make no pretense at all of being anything but “fancy” ornaments. A cylindrical mass is stuck on to the face of the wall, embellished with spirals, whittled away at the top and bottom to contradict the assumption in which nobody will concur that it means something, and finally, after it has died completely into the wall and one would say ceased, it crops out again, below the floor-line, into one of such niched corbels as are supposed to sustain the entablature over one of the doorways. No “architecture applique” could more ostentatiously advertise itself as having nothing to do with the case, as being irrelevant, incompetent and impertinent.

It remains to be added that he who sees the Hearst Building only in the photographs sees it to undue advantage. The charms of the incrusted decoration are in fact enhanced by color’, by blues and greens and reds which rather aggravate than mitigate its excrescential character, and which also aggravate its inapplicability to the stark utilitarianism of the structure to which it is in fact applied. Whatever the solution of the problem of the commercial skyscraper may be, this treatment is not a step in the direction of such a solution. Most decidedly, this is not the way to do it.