A NOTABLE BUILDING—THE WHOLESALE DRUG HOUSE OF LORD, SMITH & CO.
The illustration here presented shows a building of remarkable character, as its construction is something entirely new in this city. This edifice stands six stories and basement in height, on very solid foundations. Passers-by on Wabash avenue generally believe it to be an iron front, as we did ourselves, while the facts are that the front is composed entirely of galvanized iron, placed on a two foot brick wall. The idea of this kind of facing for a building is entirely new in Chicago, it being the first and only building of the kind erected here. The front is in the Palladian style, each story designed with heavy entablature, with arched windows, the whole crowned with a graceful and bold-bracketed cornice, also of galvanized iron. This class of work is indeed a novelty in the building world, as it combines both beauty and strength with economy and durability, this large edifice, costing but $40,000, while in cast-iron or cut stone it would have cost a very much larger amount. No reason has ever yet been discovered why galvanized iron cannot be as here successfully used in building entire fronts, as well as cornices. Many cast-iron fronts are not much thicker, while experience has shown that this material stands fire, even better than brick or stone, as it does not catch and hold the flames, and cannot crack or crumble with heat. 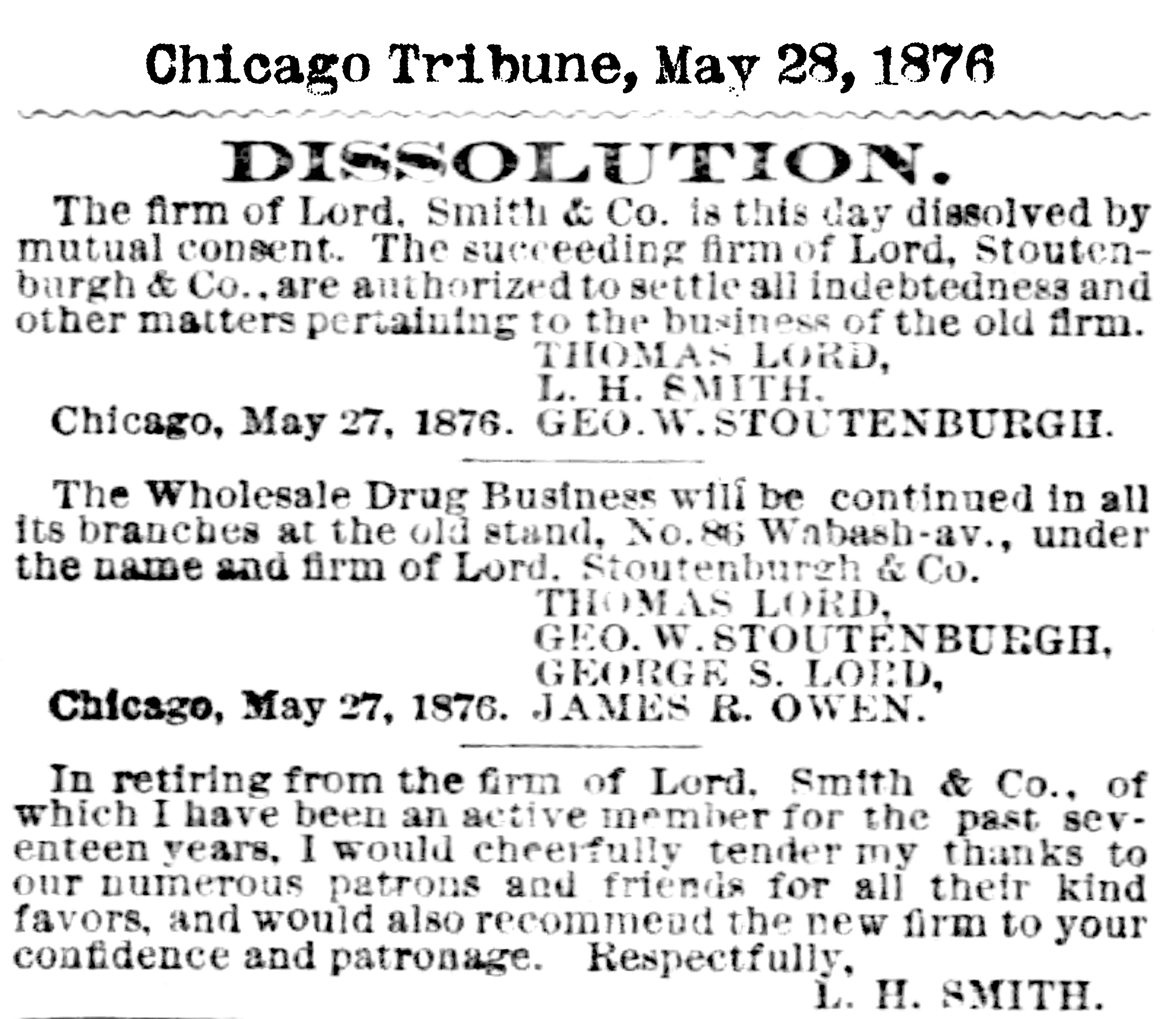 This imposing building was designed by Messrs. Cochrane & Miller, the well-known architects of this city, and has everywhere been distinguished by its solidity and quiet massive beauty. The front on Wabash ave. is 24 feet, the structure extending through the block to Dearborn Park, 163 feet, where it has a handsome elevation of Milwaukee brick and galvanized iron details. The galvanized iron in all its architectural details was made by Messrs. Ballard, Freeman & Maples of Toledo, Ohio, who did their work thoroughly and effectively, and in a manner entirely creditable to their artisans. This firm have a very extensive establishment, and rank high among builders for the beauty and strength of their work. The elevator was made by J. W. Reedy, of this city, who has put up many of the best now in operation in this city, it being at all times perfectly safe and reliable, constructed under his own patents. Thomas Clarke did the office finishing , which is a fine specimen of workmanship in black walnut, and reflects much credit upon his judgement and good taste. The contractor for the entire building, except the galvanized iron work, was R. H. Morgan, Esq., who performed his work in a thoroughly satisfactory manner to all parties, doing it substantial as befitted the character of the general superstructure. This building was erected by Messrs. Lord & Smith, for the use of Lord, Smith & Company.

In regard to the house occupying this fine structure, it is not necessary for us to go into details. They are known as the very oldest wholesale drug house in Chicago, having for fourteen years transacted business under their present firm name. Their resources are large, and their stock is at all times complete in every department. Their building is fitted inside with an especial regard to their trade in all its various requirements.

Lord, Owen & Co.—The history of this leading drug house. like that a of great many other commercial institutions of Chicago, is one of self-creation, of early struggles and trials, and of the final triumph of pluck and honesty over many difficulties. The present house is the direct successor of one of the very oldest wholesale drug establishments in Chicago. In 1836, L. M. Boyce was engaged in this business at No. 121 Lake Street. He was ranked aim nig the prominent merchants of those days, until his deatli by cholera in 1849. Then Edwin K. Bay and John Sears, Jr., who had been clerks in his employ, succeeded to the business, conducting it at No. 113 Lake Street until in 1852, when Mr. Hay and William A. Baldwin formed a partnership under the firm name of Hay & Baldwin, at No. 139 Lake, Mr. Sears continuing alone at the old stand until in 1856. In 1857, Thomas Lord, the founder and present head of the firm of Lord, Owen & Co., came to Chicago and purchased the business of Bay and Baldwin. Two years later, Dr. LaFayette II. Smith became a partner, the firm name and style then becoming Lord & Smith. The place of business in 1857, was at No. 139 Lake Street, then at No. 43, where they stayed five years; then at No. 23, where they remained until, in 1868, they removed to No. 86 Wabash Avenue. Here they had erected a handsome five-story stone-front building. In that year, G. W. Stoutenburgh was admitted as a partner and the firm name was then changed to Lord, Smith & Co. At the time of the great fire this firm was burned out, net losses on and sustaining building stock amounting to $150,000. Notwithstanding the immense loss they had sustained, they immediately resumed business in a shanty erected on old Dearborn Park, and also began rebuilding on the site of their old location. The new building, which was a substantial six-story brick and stone structure, was completed and occupied in the spring of 1872. In 1876, Dr. Smith sold his interest in the business to Messrs. Lord and Stoutenburgh, at which time, also G. S. Lord, son of Thomas Lord, and James R. Owen were admitted as partners, the firm name and style then changing to Lord, Stoutenburgh & Co. Each year now showed a rapidly increasing trade, which by 1880, had reached proportions making it necessary to seek larger quarters; these were accordingly found at their present location, Nos. 72 and 74 Wabash Avenue. Here they occupy six large floors, having an aggregate area of fifty thousand square feet, while in their immense business, which yearly amounts to considerably more than one million dollars and extends over the entire Western and Northern States and Territories, nearly one hundred assistants are required. In February, 1884, Mr. Stoutenburgh retired from the firm, which then changed to its present style of Lord, Owen & Co., being composed of Thomas Lord, George S. Lord, and James R. Owen. 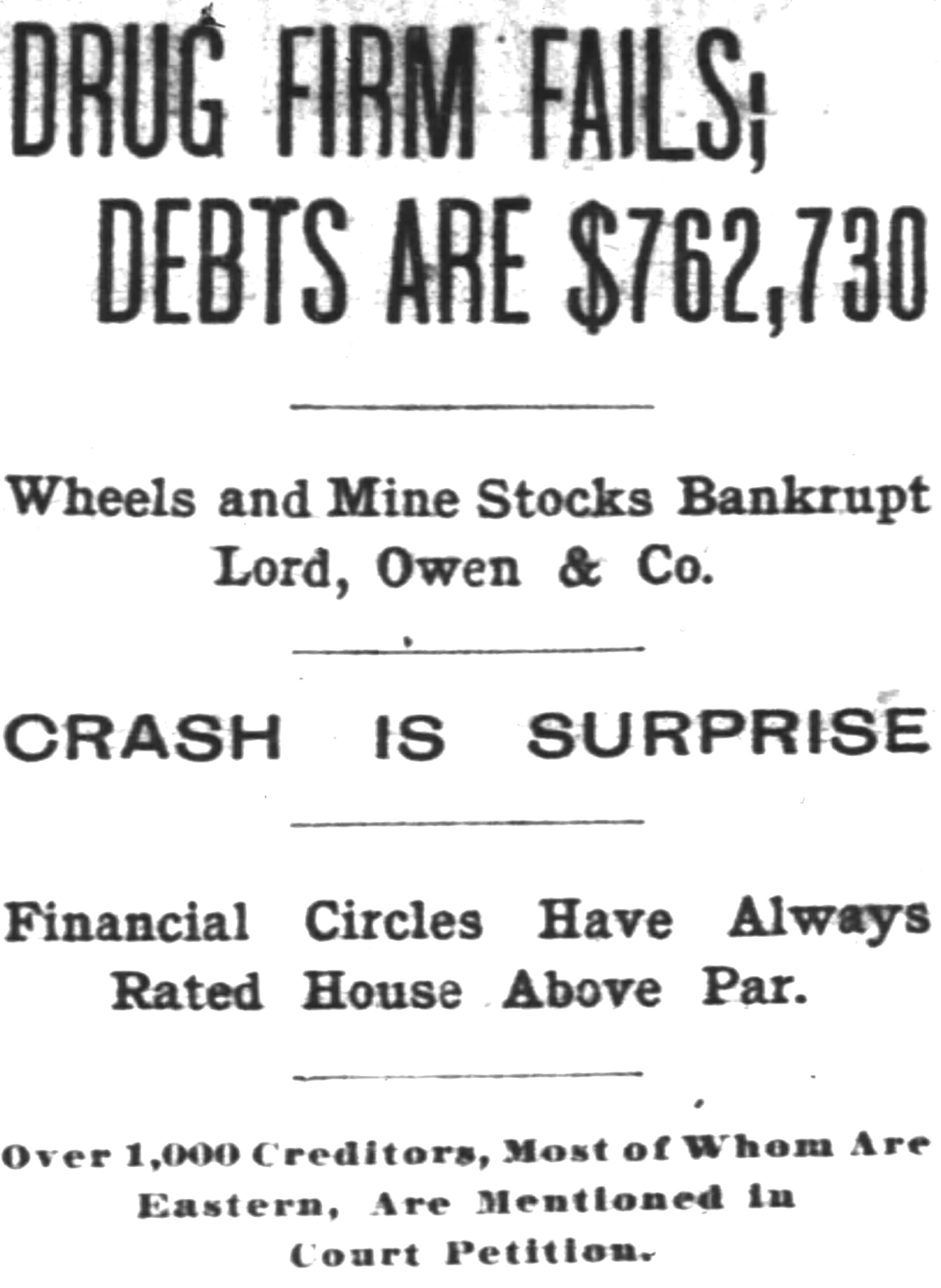 The mixture of drugs, mining stock, and bicycles proved a combination too strenuous for the well-known wholesale drug firm of Lord, Owen & Co. Yesterday a voluntary petition in insolvency was filed in the United States District court, showing that the firm owes $762,730, with assets of $315,537. Of the debts, $196,940 are secured, and $543,360 are unsecured. The principal assets are the stock, and fixtures of the store, 233 Randolph street, valued at $125,000, and outstanding accounts in the sum of $156,000.

The failure came as a great surprise to the business community and financial concerns, for the standing of the firm has never been questioned. It was one of the oldest wholesale drug houses in the country, and has always been rated above par. The direct cause of bankruptcy is admitted to be due to outside branches not in line with the drug trade. The drug department itself was productive of good revenue, and had the firm let bicycles and mining stock alone, it is said by those who are interested in the failure that Lord, Owen & Co. would have a large balance on the right side of the ledger at this time.

Firm Loses on Bicycles.
Some time ago the firm entered into the manufacture of bicycles, establishing a plant at Kenosha, Wis., from which Sterling wheels were turned out. Then came the slump in the bicycle trade, and the appearance of the the bicycle trust, to which Lord. Owen & Co. sold out. Instead of receiving cash, payment was made in stock, which has been declared to be worthless. Another lot of stock was held in the American Bicycle company, while the firm possessed a large block in the Alda Mining company, and in L.A. Blacker & Co.

Efforts will be made to reorganize the firm rather than see it go under the hammer, for the firm name is conceded to be one of the chief assets which cannot be realized upon at forced sale. The partners declined to discuss their failure yesterday. They feel keenly the loss of business standing, but declare that creditors will be protected as far as possible. 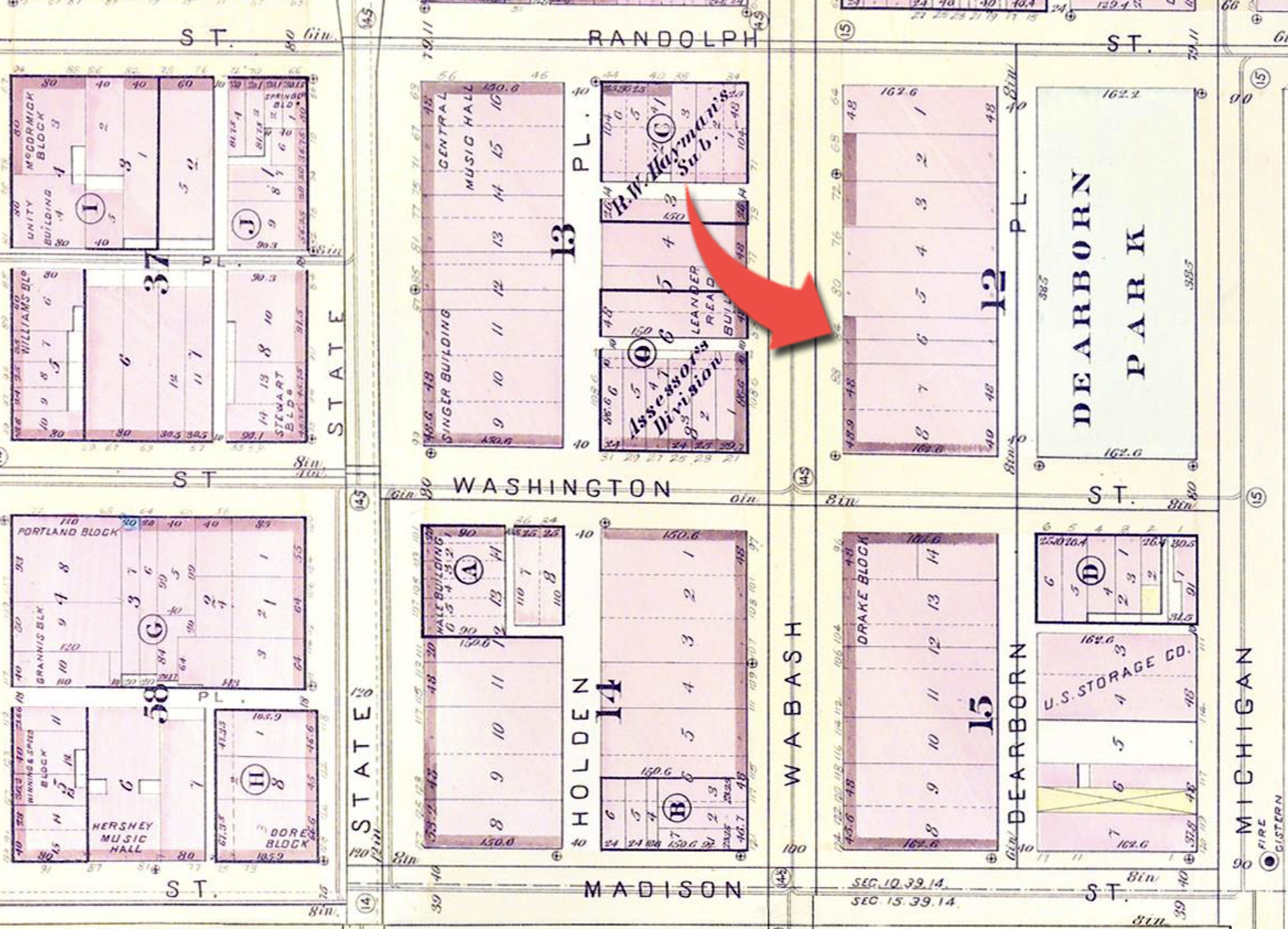 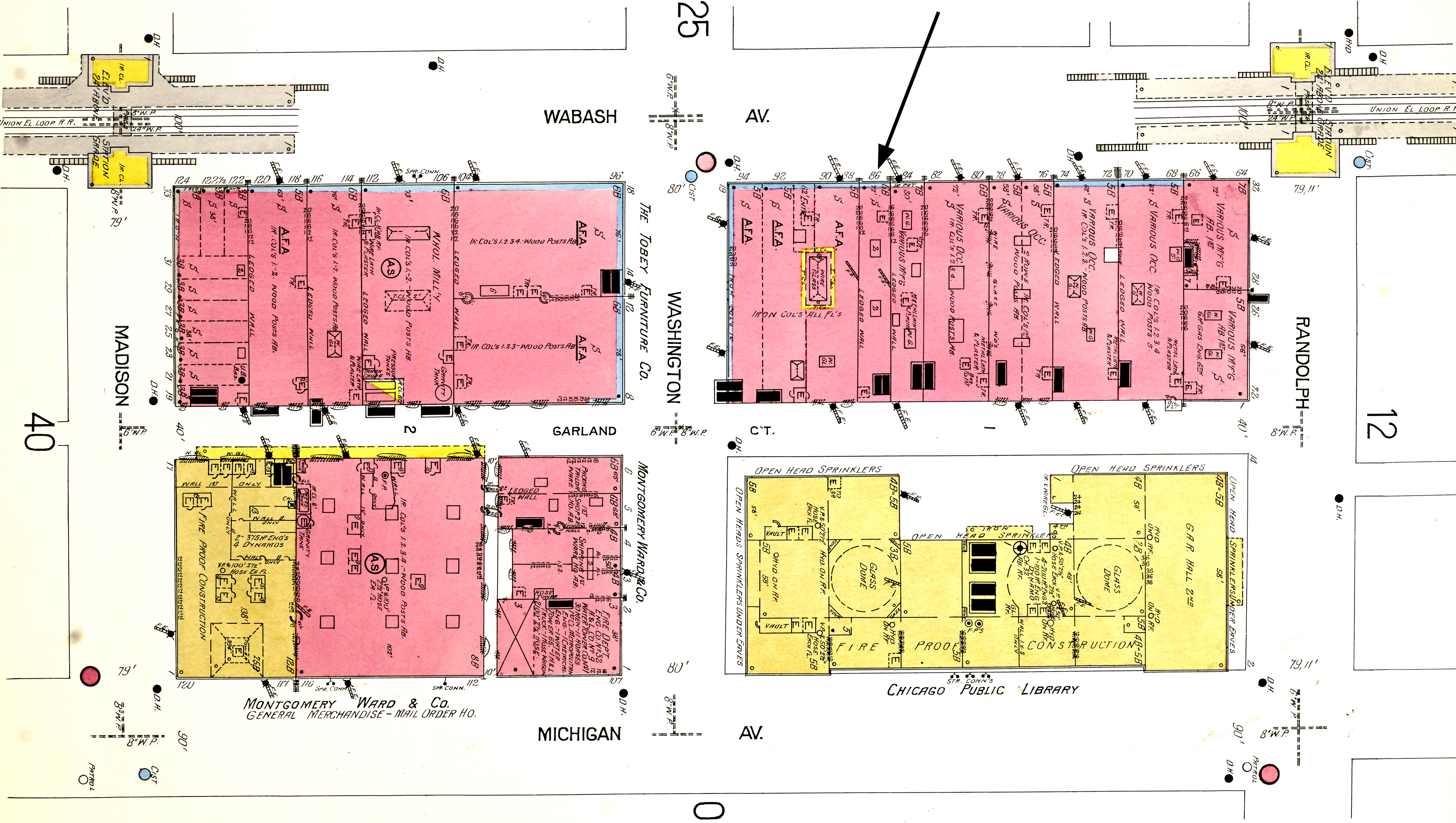 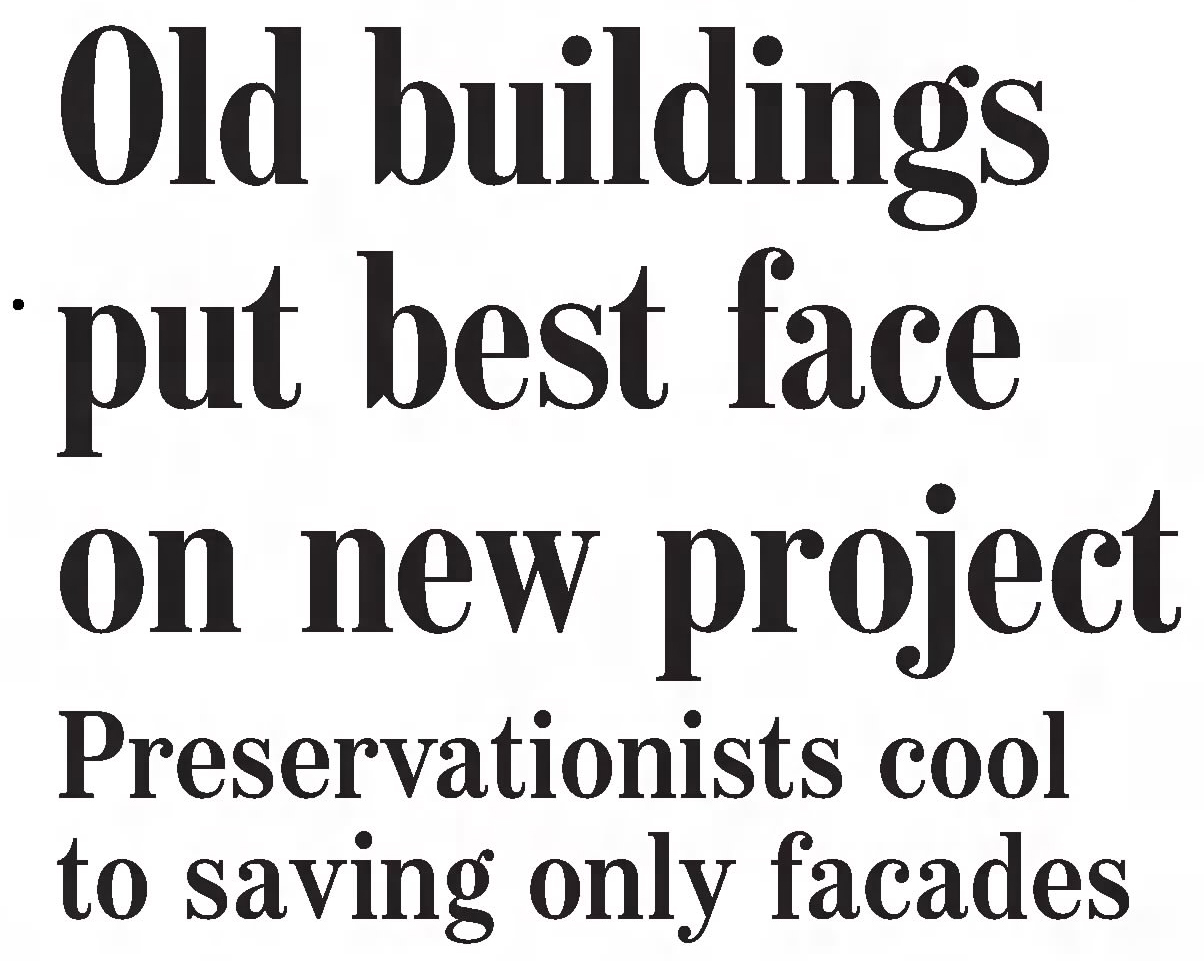 During the Roaring ’20s, few places hummed louder than Chicago’s Loop, where nightspots were filled with music and dancing, movie palaces thrived and stores boomed.

Nestled among those businesses on Wabash Avenue, standing in the shadow of Marshall Field’s department store, four nondescript buildings offered such wares as dry goods, books and clothing. The buildings were among dozens built in a flurry immediately after the Chicago Fire in 1871.

Over the years, as Marshall Field’s and other businesses grew around them, the four buildings changed ownership and fell into disrepair, although their facades kept up a brave front.

So the newest owners of the block between Randolph and Washington Streets plan to keep those facades as they build a 57-story, 100,000-square-foot mixed-use building behind them in a seldom-used restoration process.

The technique, says Shawn Hunt, developer of Heritage at Millennium Park, has been used on historic properties in Paris, London and Washington, D.C. It will allow developers to construct a new building while still preserving the 1920s-era facades of the four structures.

“The challenge was trying to be as true to an original period as possible,” Hunt said. Since there were no photos available of the four buildings from the 1870s, developers chose an era in which all four structures could be identified. And the 1920s was it.

Preservationists are not outright praising the project, but they’re not criticizing it, either.

“You have to praise the developer and city for going to this extent, but our preference would have been to preserve the building in total,” said Jim Peters of the Landmarks Preservation Council of Illinois, adding that, “there is a great attention to detail and craftsmanship in these buildings.”

Peters calls the refurbishing effort “facadism” and says the approach is not popular among preservationists. “Often, it looks awkward to laminate parts onto a new building,” he said, adding he is hopeful the Wabash construction is among the few that have been done well. A good example of those is the Oliver Building on Dearborn just north of Randolph, he said.

In the 1980s, the four buildings on Wabash had been proposed for landmark protection for post-fire buildings in the Loop, but that status was opposed by the buildings’ owners at that time. 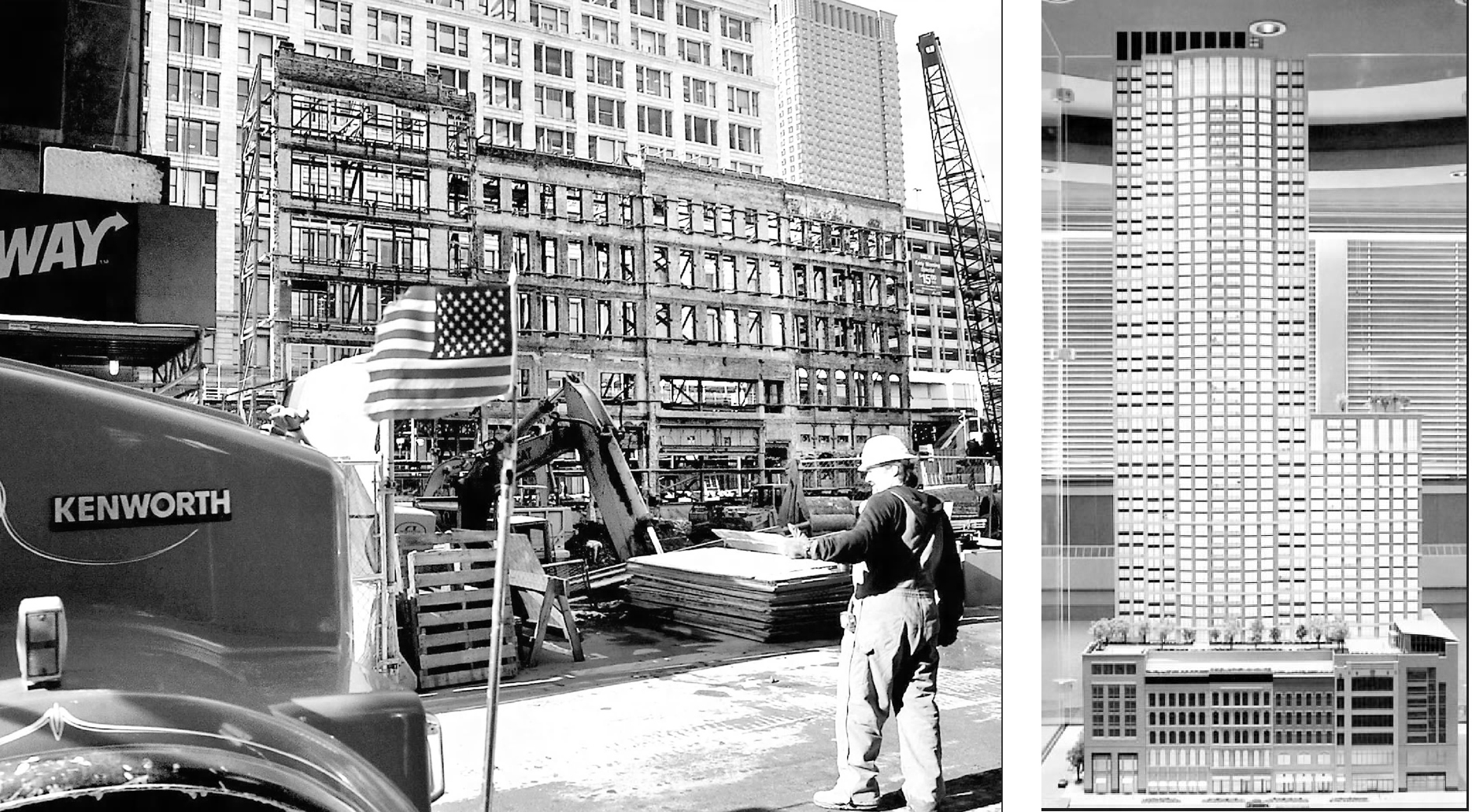 The facades of four old buildings (left) on Wabash Avenue will be preserved to front the new Heritage at Millennium Park development (right).

Each building’s look is noteworthy in its own right. The Renaissance-style Peck’s facade features arched windows and Corinthian capitals. The Couch is notable for its “vermiculated finish,” or a stone surface with deep grooves that resemble worm tracks. The Burton, with its red brick, resembles the Queen Anne facades popular in the 1880s. And the Porter is distinctive for its cream-color terra-cotta finish.

And while they differ in style, Hunt says they all have one thing in common. “They are all very fragile,” he said.

For weeks, a giant metal structure has helped support the four facades, which stand like movie sets as construction crews dig behind them. In recent days, foundations have been connected to the facades so that they can stand on their own.

The facades will serve as ornamentation to the ground floor of the residential-retail building.

They are likely to attract attention because they will be standing in air that is much cleaner than it was 50 years ago, Peters said. The facades won’t have the black and grimy look of many of Chicago’s older structures.

“Once these buildings are cleaned up, they aren’t going to be just propped up but restored,” said Peters. “When they’re finished, these buildings will last a long time.”

1 The Porter Building was built in 1916 after the fire of December 28, 1915 destroyed the previous building at this address.