STATE STREET THE “RUE DE LA PAIX” OF CHICAGO.—FARRAR & WHEELER’S BEAUTIDUL BUILDING, WITH A FEW FACTS CONCERNING A GREAT LOCAL INDUSTRY.
State street is now the cynosure of all eyes. From its beginning at the river southward to Van Buren st., it has developed into the most beautiful thoroughfare in all Chicago, having the grand Palmer House at the corner of Monroe street, with its graceful corner dome marking its central attraction. Travelers say that no street in the world can show such grand facades in the space of a half dozsen blocks, and thousands of people testify to the truth of their assertions every day, by flocking in crowds to admire the long line of beautiful buildings, spread out like a panorama to their gaze.

One of the most notable buildings in this street of beautiful architecture, and the one that elicits probably the most praise, is that recently erected by Messrs. Farrar & Wheeler, at No. 155.

THE BUILDING EXTERNALLY.
Our artist has given a fine representation of this building on our double page, but it is simply impossible in simply black and white, to show the effect of the light upon the front, whose different shades of red, white and dark green polished granite contrast so exquisitely with their back ground of finely cut Buena Vista sand stone, itself relieved in turn by brilliantly colored encaustic tiles, the large openings being set with highly polished French plate glass.

The design of the front is a richly treated renaissance facade, the details having a Neo-Grec feeling. The first story is divided into three openings by finely-polished deep-red Scotch1 granite pilasters, resting on mellow deep colored American green granite, rusticated and richly polished, the pedestals standing on plain dark Quincy granite. The caps of the columns, which are as beautiful as rare in delicacy of design, support the cornice above. The lintels of the windows rest on sand stone jambs which serve as a background for the rich colors of the granite.

The two centre columns of the second story are also Scotch red granite, the side pilasters being of sand stone. At about one third of the height of the columns is an exquisite band of carved sand-stone. Springing from the capos of the columns and pilasters are chaste brackets projecting beyond the face of the building and carrying the facia, on which are cut in raised letter the name of the machine “Wheeler & Wilson,” encircled with a neatly molded label. At each end are tastily wrought sand-stone vases. From the centre project rich brackets upholding a pretty sandstone balcony, having at each end vases of the same design.

The main columns and pilasters of the third story are of sand-stone, with a rich ornament engraved in the centre. The smaller columns supporting the lintels of the openings are of polished red granite.

The fourth story pilasters are of sand-stone, with an enrichment worked on the face, the centre columns being of deep red polished granite, while the smaller columns supporting the lintels of the windows, which are beautifully moulded, are of green polished granite.

The fifth story is subdivided into six openings, the arches all resting on granite columns of complementary colors. The cornice above is beautiful in design and detail, the ornaments being sand-stone, well-cut and relieved. Above the cornice, spanning the whole distance of the centre bay or compartment, is a segmental facia on which is cut in raised letter the name of the firm “Farrar & Wheeler;” at the ends are beautiful vases; the whole effect being heightened and crowned with a bronze figure. The whole of the cornice, strange to say, is of stone, and not galvanized iron, now so much in vogue.

The whole facade sparkles with its brilliant colors, and charm with its delicacy of detail. Its exquisite proportions stamp it as a conception of genius, and fascinate the eyes of all passers-by on State street, now rapidly becoming our Rue de la Paris in the beauty of its architecture and the extent of its business. To render the whole structure complete, it is covered with Garry’s Patent Iron Roofing, and the rear is provided with fire-proof iron shutters. The iron work was furnished by the Union Foundry.

THE BUILDING INTERNALLY.
Internally, the building is provided with a water-balance elevator and steam heating apparatus, while danger from fire is lessened by hose on each floor communicating with the elevator tank on the roof, holding 4,000 gallons. The books and valuable papers of the house are protected by strong and perfectly constructed fire-proof vaults. The stairways, cases, counters and desks are of black walnut, enriched with tiling in delicate colors. Everywhere the utmost care was paid to the construction, the workmen being carefully watched in every detail. The doors are all fitted with Sargent & Greenleaf’s locks. 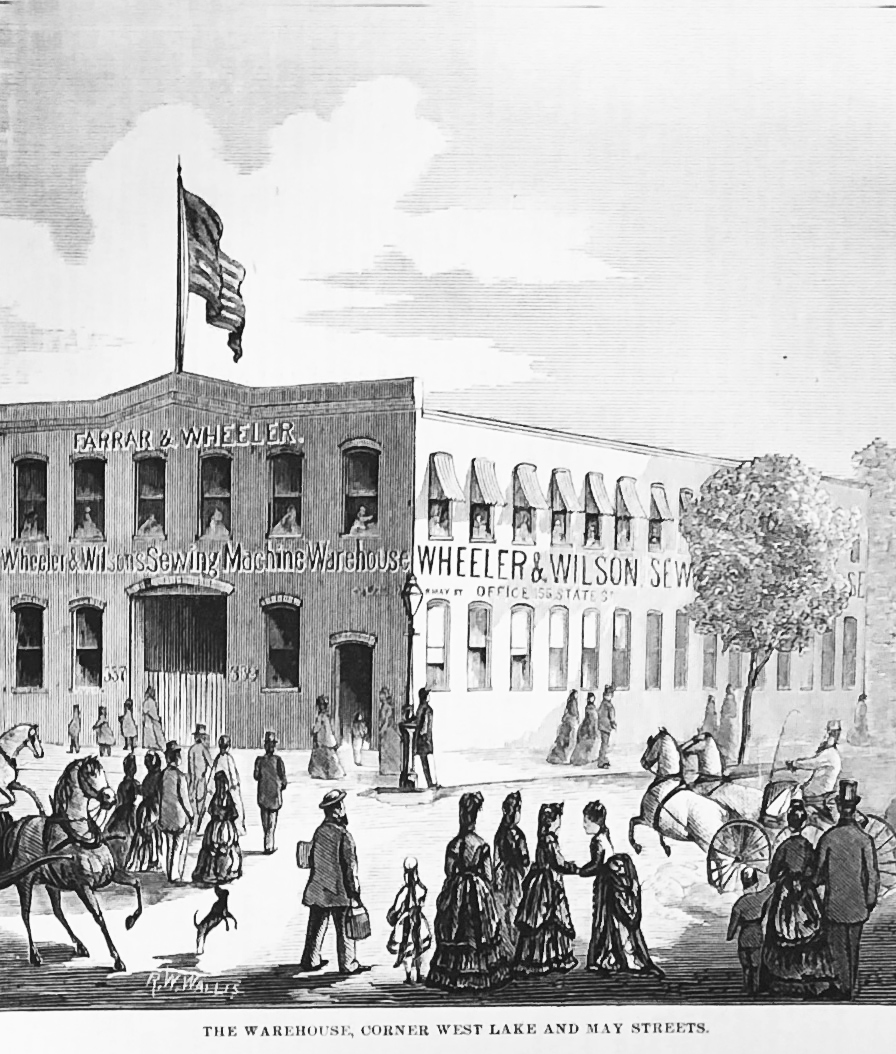 BUSINESS OF THE HOUSE.
Th interior views of the office and salesroom, made from actual sketches by Mr. Wallis, as also the accompanying view of the warehouse, testify to the magnitude of the business done. Messrs. Farrar & Wheeler employ twenty-five bookkeepers, besides a large force of adjusters and packers. The sales of the house in 1873 amounted to nearly two millions of dollars. This enormous trade has been done entirely with the family machine, which is so universally known and admired for its beauty, quietness, and speed, as well as for the excellence of the work executed upon it, and has been due to the great improvements which have been made chiefly at the suggestion of Western agents, within the past three years.

These improvements have also received the highest commendation at Vienna, as shown by the following cablegram, sustaining the award at Paris of 1867:

Such ringing words all the way from Francis Joseph’s capital, were received with pride by Messrs. Farrar & Wheeler, who naturally rejoice to see the machine they represent thus covered with honors in competition with the world.

For five years past, however, the Wheeler & Wilson Company have seen the great value of the heavy manufacturing trade, and have bent their energies to the task of furnishing a rotary hook manufacturing machine which should excel others in speed and excellence of stitch as rotary motion does vibratory. This machine has at last been perfected and exceeds the most sanguine expectations first formed, and must largely increase the present trade.

A CITIZEN’S PRIDE OF CHICAGO.
In concluding our walk with our artist through this building, we cannot but express much pride that we are of Chicago, where such princely establishments can exist. Extreme (we have no other front in Chicago equalling it in many respects); internally it is a busy hive of industry, managed with careful and enterprising judgement. Our merchants certainly deserve great credit for their untiring energy, which has lead them, as in the case of this house, to a brilliant success. 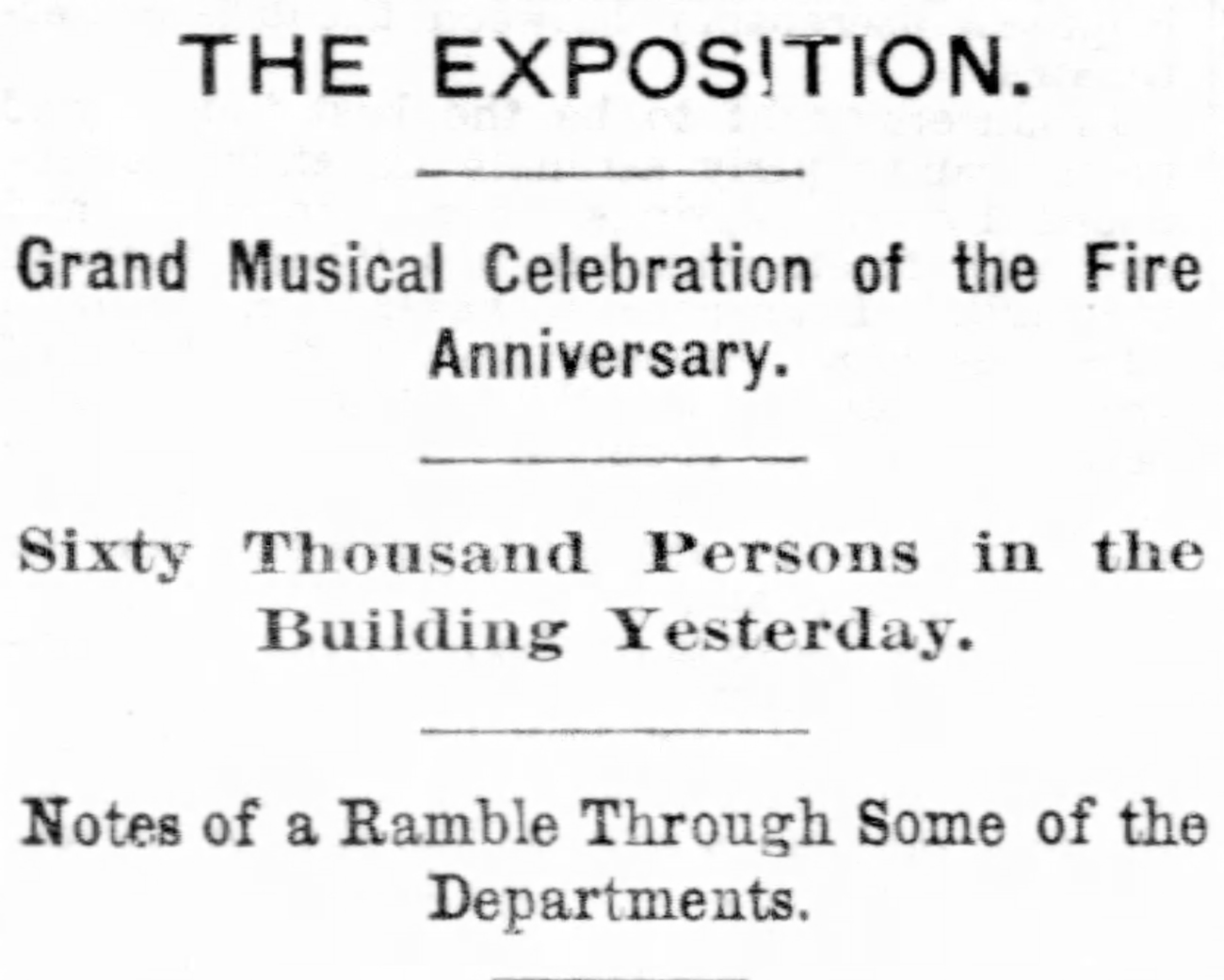 THE WHEELER & WILSON SEWING-MACHINE.
The Wheeler & Wilson Sewing-Machine Company have in their booth a collection of machines doing a vast amount of work. For instance, the power in the building has been applied to the “family” and No. 2 machines, which are running at the rate of from 1,000 to 2,000 stitches per minute on actual work. They are manufacturing also at the Exposition a sea of car drapery for the Pullman Palace Car Company, and shirts, harness, pads, and plenty of other work of a similar character. Their No. 6 manufacturing machine, lately introduced, is meeting with an immense sale among shoe and harness-makers and woolen-goods manufacturers. The Wheeler & Wilson machine received, as is pretty well known now, the only recommendation for the grand diploma of honor. A similar distinction was conferred upon them at Vienna, where they received not only the medals for merit and progress. but also the only recommendation for the grand diploma of honor. These awards, however, are only a few among the many achieved by the Company. In the middle of their booth is a magnificent full case, gold-plated machine, which is greatly admired. The machines are operated entirely by ladies from the different manufactories of the city, among which are those of E. Jennings & Co., and Van Rensselaer & Co. Last evening their office, No. 155 State street, was illuminated from the first to fifth floor. In the window was noticeable a mass of metal labeled, “Our stock in trade, Oct. 9, 1871.” This was the remains of half a dozen machines taken from the ruins of the office No. 100 Lake street after the fire. It takes thirty bookkeepers to look after the business of this office. 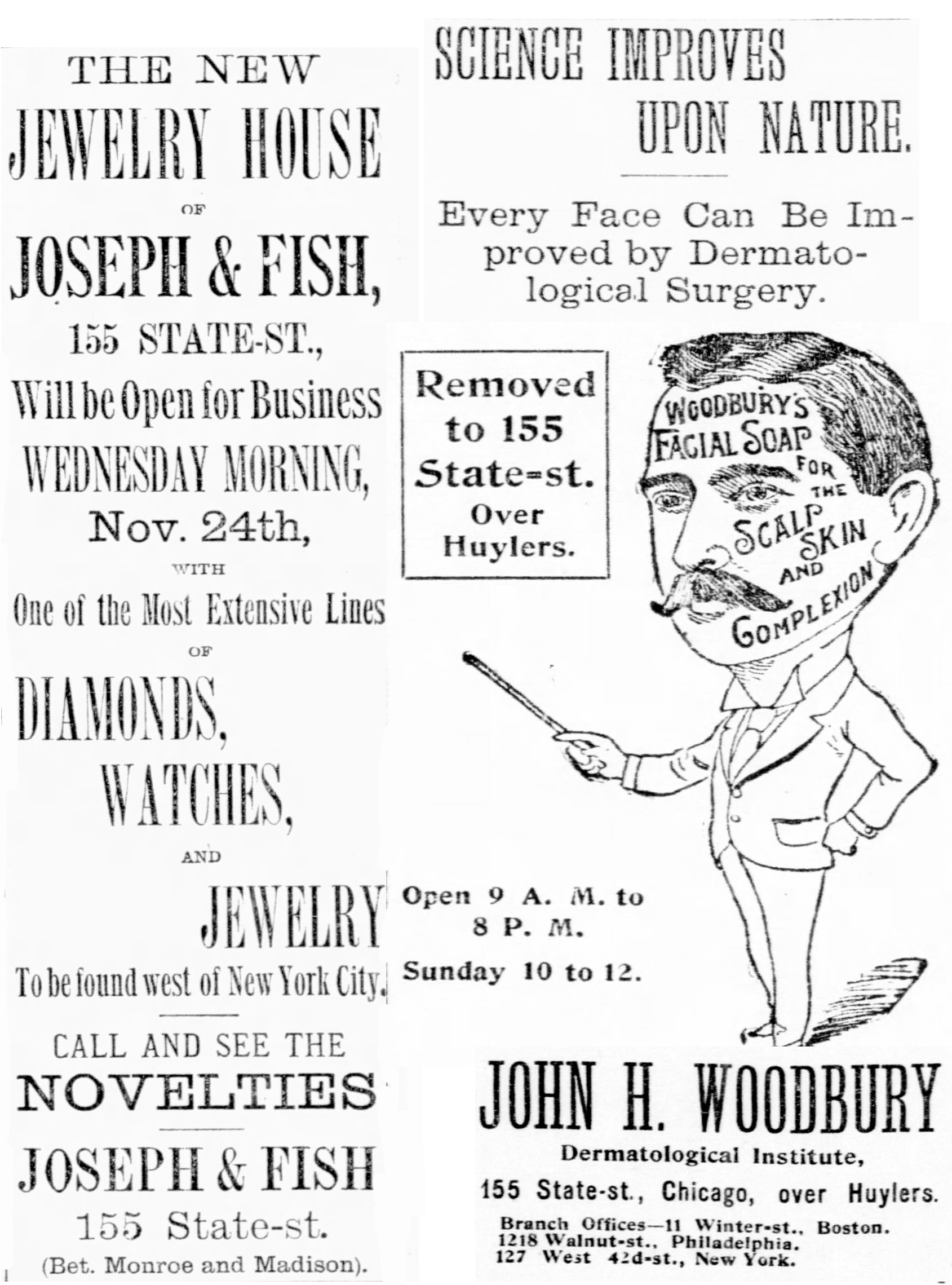 STATE STREET—An interesting transaction in State street property was closed during the week when Adolf Kraus disposed the of the land at 155 and 372 State street to Victor and Joseph M. Well, and as family ties entered into the deal, the former being a son-in-law of Mr. Kraus, the consideration was not disclosed. The consideration in the deed was $1.

No. 155 State street is in the very heart of the central business district. It includes a plot of ground fronting west 26 feet and having a depth of 83 feet. It is 86 feet north of Monroe street and is improved with a six story and basement building erected many years ago.

Mr. Kraus nought this property in 1900 from Samuel Wheeler and the heirs of Arthur Farrar for $240,000, which was at that time considered a big transaction in State street property. In 1902 he leased the land to David Meyer and Henry Siegel for ninety-nine years at an annual rental of $18,000 equivalent to 4 per cent on $450,000 and 7½ per cent on the figure at which he purchased the property.

Bernard Baumgarden, a State street merchant, has just rented the building for a period of fifteen years from May 1, 1911, through E. F. Keebler & Co., at an aggregate rental for the term of $500,000. This property adjoins Carson, Pirie, Scott Co.’s retail store, and Mr. Mayer, who erected the building which that store now occupies, was at the time a member of the dry goods firm of Schlesinger & Mayer, and the intention was to add the Kraus lot to Schlesinger & Mayer’s store. The lease to Baumgarden establishes a gross rental valuation of $1,333 a front foot and $16 a square foot. The board of review valued the property at $270,000, of which $17,500 is in the building.

As far as our research has shown the following is the roll call of Loop buildings built in in 1872, the first year after the fire, and are still standing. 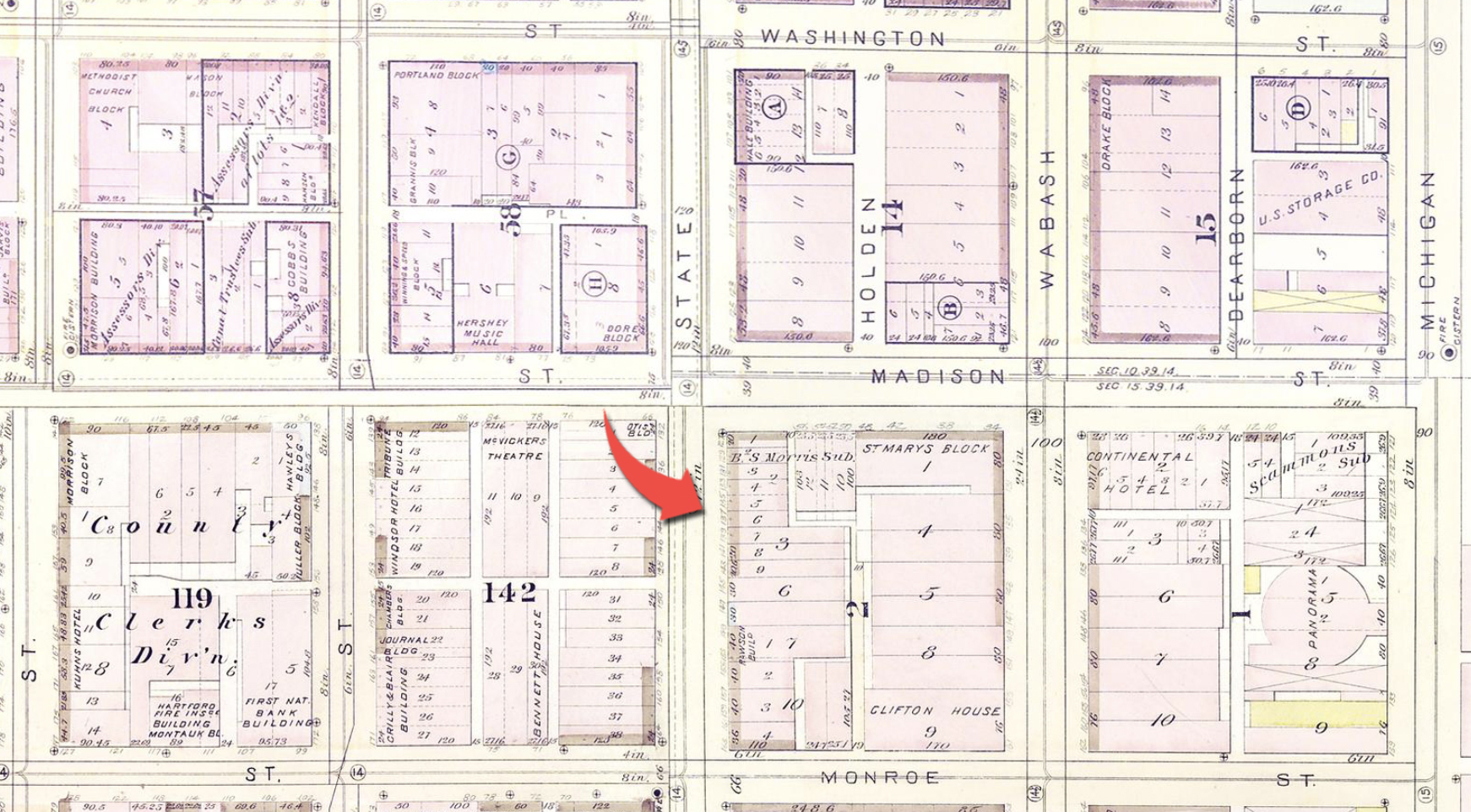 1 According to the Oxford English Dictionary, in England, “Scotch” was the “the prevailing form” from the late 17th century until the 19th century, though “Scottish” was used in more formal writing. But in the 20th century, the word “Scotch” fell “into disuse in England as well as in Scotland.