Judge L. B. Otis may be proud of his new marble building at the southwest corner of Madison and LaSalle. It presents a magnificent outside, and is in harmony in size and style with the Bryan Block, just north of it on LaSalle. It is now almost ready for business. The Custom House opposite Bryan Block, will soon have a companion next door north, at the corner of Madison, the basement of the most firmly built in the city, being now finished.

LaSalle street, south from the river to its grand terminus, the Lake Shore & Michigan Southern Depot, has justly been denominated the Wall street of Chicago. We present elsewhere a fine illustration of the magnificent building of James & L. B. Otis, situated at the southwest corner of LaSalle and Madison streets, having a frontage of 190 feet on the former, and 90 feet on the latter street. It contains four stories and basement, and was built with special reference to its adaptation to banking, insurance, and real estate offices. It was among the first structures completed, and was ready for occupancy in six months from the laying of the foundation stone. The entire cost was $120,000, and it is only one of the many blocks which the wealth and munificence of the Otis Brothers have enabled them to erect. The entire number of offices in the block is 83, appropriately arranged for the purposes intended. Geo. H. Edbrooke is the architect. 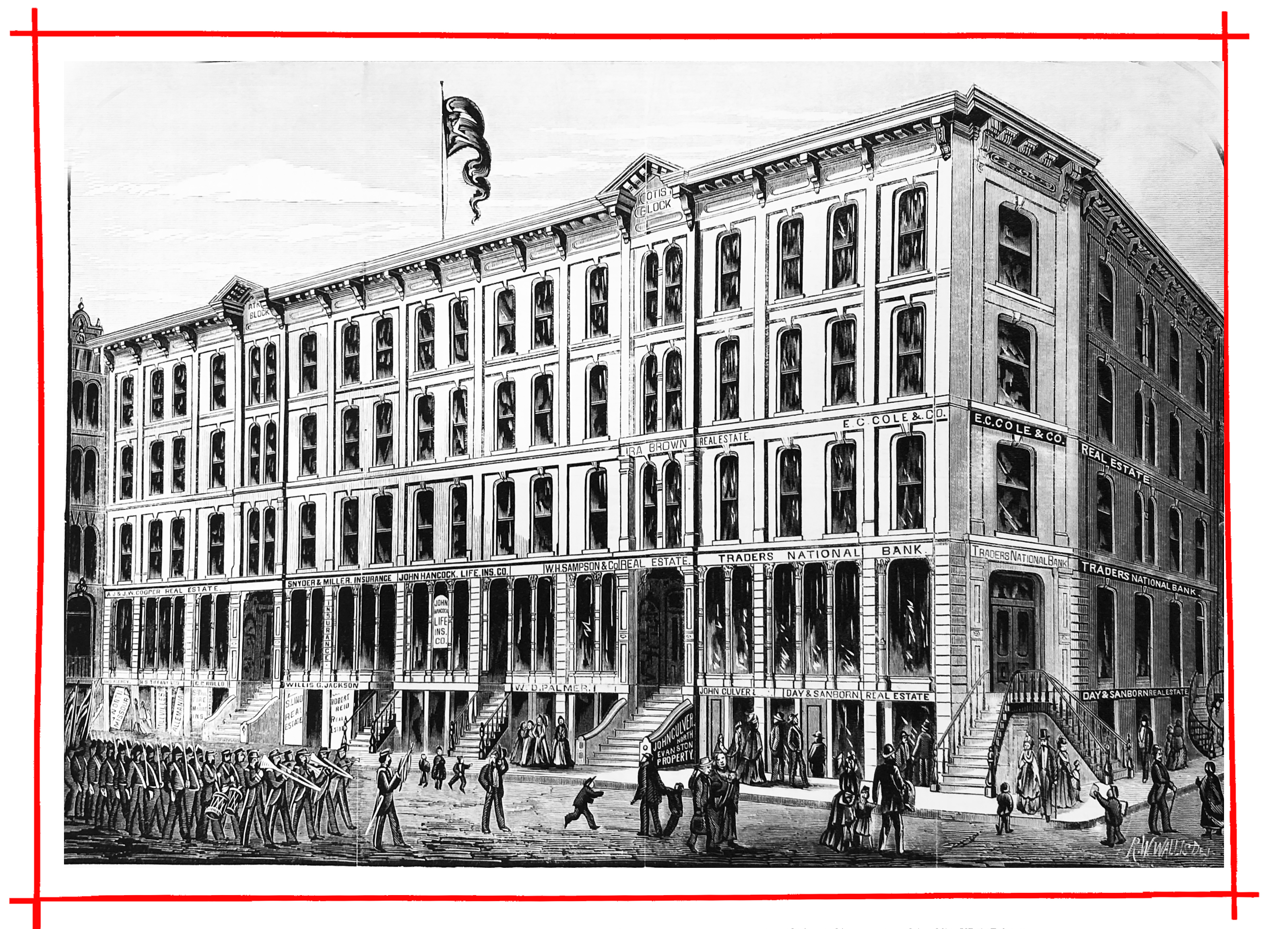 DAY & SANBOURN.
Occupying a convenient and well=arranged basement office, is the real estate house of Day & Sanborn. In addition to their general commission business, these gentlemen are largely interested in subdivisions of their own, in choice localities, among the more prominent of which may be mentioned an eighty acre tract near Morgan Park, on Washington Heights, known as Auburndale. This is considered very choice territory, and is attracting considerable attention in real estate circles. They are also land owners of a seventeen acre tract at Lawndale, and other property in vartious parts of the city.

WM. D. PALMER,
a gentleman largely interested in inside property, especially that of Wabash avenue and State street, occupies an office in this block. Mr. palmer is a brother of the owner of the famous hotel, an illustration of which appears elsewhere, and has the renting of it. He is actively engaged in the real estate business, and a desirable list of property may always be found on his books.

WM. H. SAMPSON & CO.
In this block may also be found the old and reliable real estate house of Wm. H. Sampson & Co., established in 1845. This firm is composed of Wm. H. Sampson, his son, J. C. Sampson. and Wm. L. Pierce, who, at the solicitation of the elder Mr. Sampson, has been associated with the firm since the fire. Mr. Pierce is well known as an energetic, wide-awake representative Chicago man, and has proved a valuable acquisition to the firm, which, possessing ample capital, has made by honorable dealing a successful record. A large list of property may always be found at their office, and “Sampson’s house-renting agency” is as familiar as household words.

IRA BROWN,.
This gentleman is an extensive dealer in suburban property of his own. He has had several years’ experience in Chicago real estate, and occupies comfortable head-quarters in this building. Mr. Brown was among the first to resume business immediately after the fire, and his firm belief in Chicago realty has been satisfactorily strengthened by the rapid increases in the value of his own investments.

A. J. & J. W. COOPER.
The real estate firm of A. J. & J. W. Cooper, occupying No. 154 LaSalle street, main floor, deal largely in city and suburban property, making a specialty of Washington Heights. They are the principla owners and agents for “Clifton Addition to Washington Heights,” which lies on the highest and most desirable part of the ridge, fronting Morgan Park and the new Military Academy now being erected immediately in front of this property. They handle some of the choicest property in that favored suburb, and their sales for the past sixty days, for themselves and others, have been large, amounting to nearly half a million of dollars. They also deal largely in other suburban property.

THE JOHN HANCOCK LIFE.
F. Babcock, Esq., general agent of the John Hancock Life Insurance Company of Massachusetts, occupies handsome offices at N. 150 LaSalle street, upon the main floor. This gentleman, aside from the high individual merits of the above named company, represents probably the best and most equitable system of life insurance now known. The beneficent results attained through this company are due, mainly, to the wise provisions of legislative enactments by the State of Massachusetts, making all policies absolutely non-forfeitable,and continuing the same in force for the full amount insured for, for certain periods, after one payment only has been made.

Of the thousands of prudent men who now recognize the vital necessity of life insurance, a large proportion have been discouraged from seeking its benefits, by the arbitrary and unjust rules governing the management of nearly all the companies. For instance, a well-known citizen of Chicago was insured for a period of many years; always paid his premiums promptly, until, a few months since, when the term for the payment of his premiums expired, and the company refused, a few days later, to renew. The result was, he died shortly after, leaving his family destitute, and the company who received thousands of dollars in premiums, declined to do anything for the widow and orphans.

By the plan adopted in the “John Hancock,” the insured, at the age of forty, after having made one annual payment, his policy is continued in force two years and forty-nine days; after two payments, four years and ninety-six days; after three payments, six years and 125 days; after four payments, eight years and 123 days; and after five payments, ten years and 86 days; during which several periods his policy remains in full force, although no additional payment has been made, so that every provision is made for the contingencies of sickness, reverses in business, or other circumstances beyond the present control of the insured. The John Hancock embraces improvements of equal value on the “Endowment Plan,” and will, after one payment has been made upon a fifteen endowment policy, give a paid-up policy for one fifteenth of its face, and in the like proportion to the number of payments made, or one payment will continue the policy in force for its full amount six years and 123 days, five payments, 38 years and 230 days. The statistics of the dealings of this company in special cases in Chicago, are extraordinary, and deserve the deliberate attention of careful men, and we should remember that, if insurable to-day, we may not be insurable to-morrow.

N. S. TIFFANY & CO., INSURANCE AGENTS.
This old established firm occupy the fine basement offices at the south end of this block, on LaSalle street. They represent a large number of the leading fire and marine insurance companies of this country. Their business for the past year amounted to over $300,000 in premiums. By a careful selection of risks, their losses during the past year have been very small. The firm is composed of H. S. Tiffany, a well-known and experienced underwriter, and J. W. J. Culton, Esq., formerly of the well-known commission house of Culton & Sprague. Possessing ample resources and a ripe experience in their business, and employing a large clerical force, they are abundantly prepared to meet the demands of a large and increasing business.

THE TRADERS’ NATIONAL BANK,
an old and tried institution, stands on the corner of this block, facing Madison and LaSalle streets. This bank was incorporated in 1864, and its affairs are administered by Joseph O. Rutter, President; Thos. P. Tallman, Cashier; and the Directors, consisting of Joseph O. Rutter, Thos. P. Tallman, R. T. Turnley, L. C. Ellsworth, and John Mattocks. The capital stock is $200,000, with a surplus of $40,000. This bank has always been a popular institution among bthe solid men of Chicago.

JOHN CULVER,
This gentleman has his office in the basement of No. 142 LaSalle street. This place is the headquarters of parties interested in North Evanston property. His home is in that pleasant suburb, and he is actively engaged in the sale and improvement of of property. His business this spring has been very brisk, and a large amount of capital has been invested there by active men whose money and work and influence will help much in rapidly building up this village. Mr. Culver owns much of the most grove property in North Evanston, and has laid it out in large lots 30 by 150 feet, with avenues from 75 to 150 feet wide, and has built several miles of sidewalks, and also a number of good homes. He offers first-rate inducements to purchasers bothe for houses and for profitable investments. 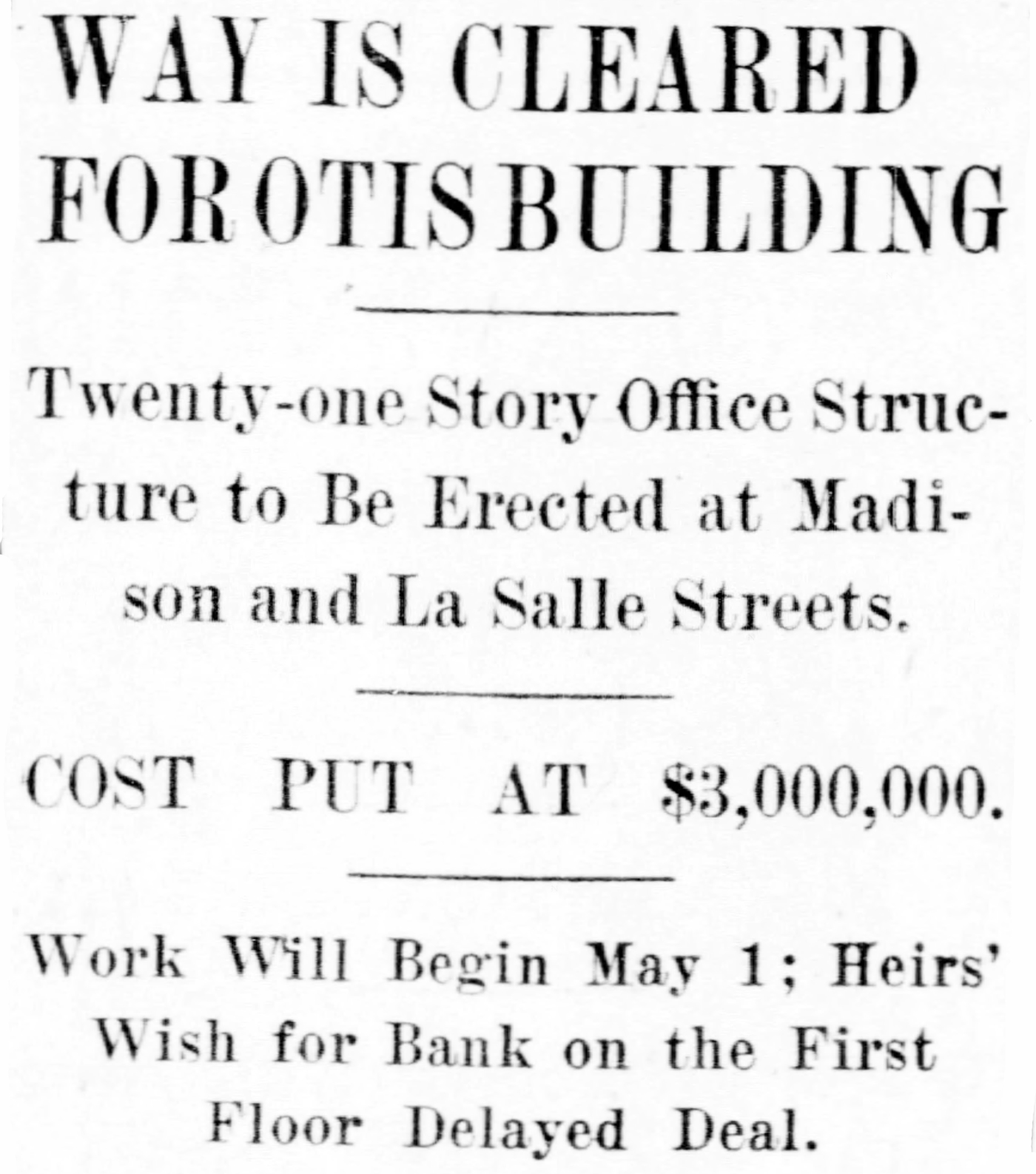 The announcement is authoritatively made that the way has finally been cleared for the erection by the Otis estate of a great office building at the southwest corner of LaSalle and Maison streets.

It will have a frontage of 190 feet on LaSalle and 111 feet on Madison, and will cost $2,500,000 or $3,000,000. The original plans for the building were prepared by Holabird & Roche about two years ago, called for a seventeen story structure, but present plans are said to contemplate a building of twenty-one stories.

Tearing down the present structure on the site probably will begin May 1, and the building will be completed and ready for occupancy by May 1, 1912.

Wanted Bank on First Floor.
It always has been the idea of the Otis heirs to have a large bank occupy the first floor of the building and the difficulty of securing a desirable tenant of this character is understood to have materially delayed the construction.

It is understood, however, that this difficulty finally has been overcome, and the closing a few days ago of the conveyance by the heirs of Mary B. Wilson to the other heirs of L. B. Otis of the interest of the former in the property is said to be the preliminary to the perfection of plans for proceeding with the construction if the building.

The announcement in one week of plans for the construction of three great buildings in the central business district, the Monroe at Michigan avenue and Monroe street, the twenty story building to be erected by the Schoenhofen Brewing company in Monroe street, just east of the Rector building, and the Otis building, serves to emphasis the present remarkable building boom in the heart of the city. 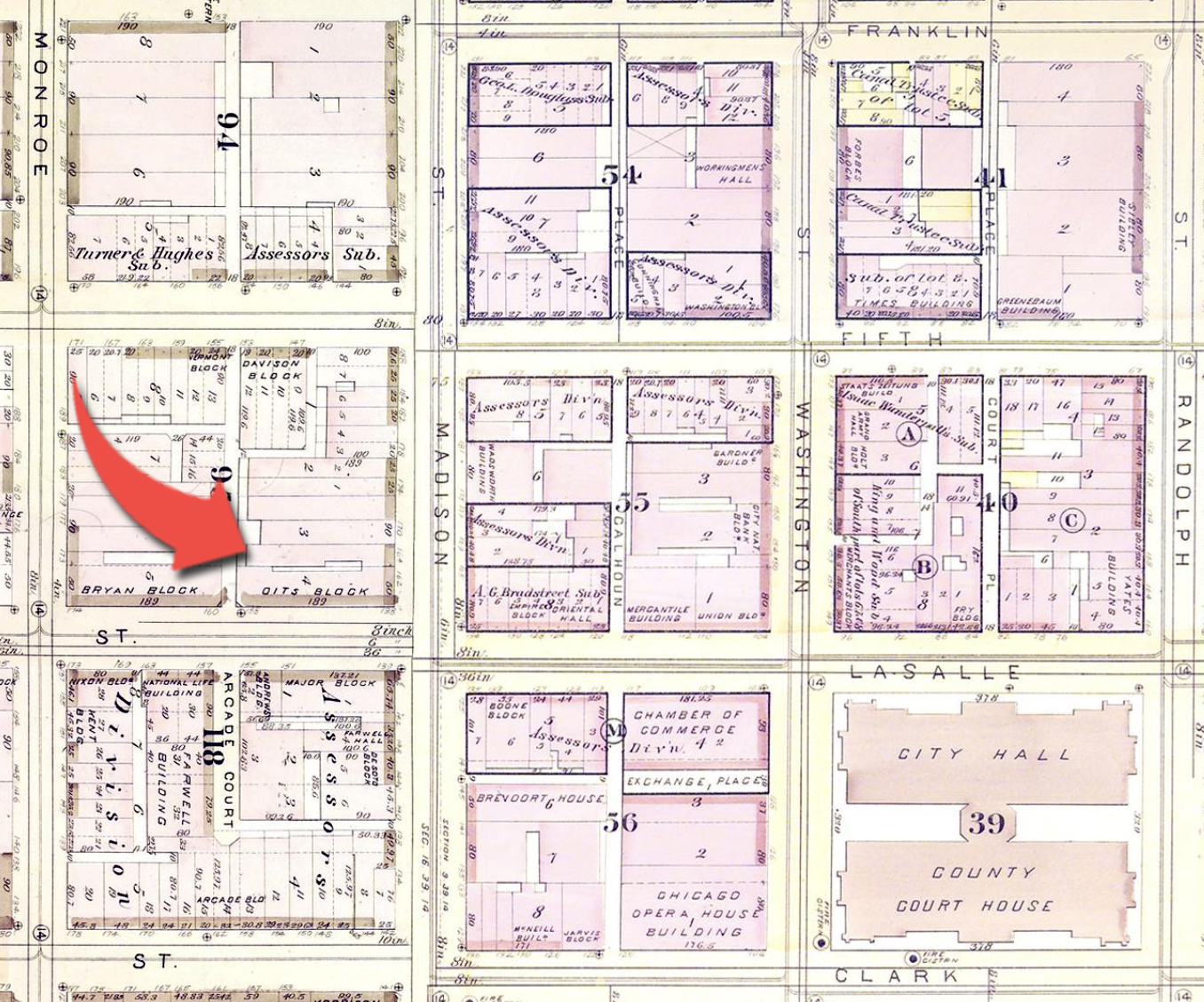