History of Chicago; Its Commercial and Manufacturing Interests and Industry, By I.D. Guyer, 1862 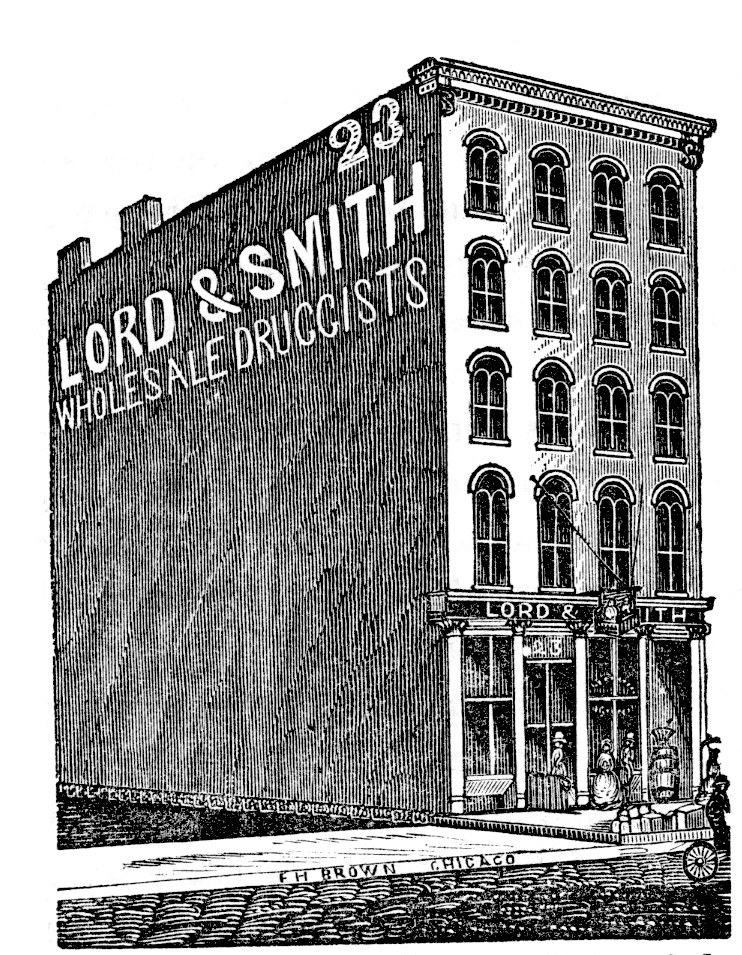 WHOLESALE DRUGGISTS.
When Prince Napoleon1 visited Chicago last summer, nothing was he more surprised than in the extent of our commerce—the magnificence of our stores—the extent and richness of our merchandise—and the intelligence, and business education of our merchants, several of the leading representative houses of which he visited, and expressed his surprise at our combined commercial advantages, and at all the elements of wealth and prosperity culminating here, to be developed to a still greater extent. We first heard of the Prince at the great book and publishing house of S. C. Griggs & Co.—then at other representative houses in various branches of commerce. On visiting the wholesale Drug House of Lord & Smith, which occupied the next door to Griggs’, he remarked, after looking through their extensive establishment, “If this does not represent the right arm of power, and the true dignity of American merchandising, then I have not seen it on this continent.” And Prince Napoleon was right! In Chicago we have many such merchants of true mercantile dignity mercantile integrity and mercantile education, in the fullest acceptation of the term. These are the men who are not only laying broad and deep the foundation, upon which is to be reared one of the largest and most prosperous cities on this continent; but are shedding luster and prosperity upon the present, and diffusing intelligence and virtue, thereby advancing civilization in this great valley, and throughout the regions of the North-West, which are rapidly being settled by refugees and emigrants fleeing from the crumbling thrones and despotisms of the old world.

The Drug House of which we have spoken above, is one of our oldest, most respectable, and strongest firms in Chicago moving on quietly, yet boldly and successfully, because justly and perseveringly; rising superior to all obstacles, and becoming more widely and favorably known throughout the North-West.

Among some of the leading articles represented by this firm, we will mention only a few, for want of space Drugs, Paints and Oils, Brushes, Window and Druggists’ Glass, Kerosene, Acids, Chemicals, Varnishes, Patent Medicines, Alcohol, Surgical Instruments, Extracts, Perfumery, Concentrated Preparations, etc., etc.

Messrs. Lord & Smith are the chief dealers in Patent Medicines for the North-West, of which they send forth large quantities, the healing balm to alleviate the distresses of the wounded, bruised and sick. These remedies are very often successful where the regular practitioner pronounces the case hopeless. Patent Medicines have their opponents, not less than advocates. There are other men besides those who belong to the established school of medical science, who have changed human affairs, and affected the destiny of their fellow men all over the earth. The manufacture of chemicals in the United States may be said to date from the war of 1812. The commercial restrictions which preceded that war, caused such a scarcity and dearness of chemicals, that the preparation of the more prominent articles offered an attractive field for the enterprise. The chemicals kept by this house have an enviable reputation for purity, exactness and beauty. They sell no others but those they can safely recommend. Of Oils, they deal largely in Lard, Coal, Kerosene, Linseed, and others. Druggists’ Glass-ware has become a leading business, represented in this city by only a few firms. Lord & Smith have always on hand a full supply, such as Druggists’ Vials, Jars, Demijohns, Carboys, etc. This kind of glass is made of ordinary materials generally sand with lime, and sometimes clay and alkaline ashes of any kind; but great care and experience are required, particularly in making bottles that are to contain effervescing fluids. The materials must be carefully and thoroughly fused, and the thickness uniform throughout, to resist the pressure of the contained carbonic acid. Reliable houses, only, should be dealt with in this line. Of Acids, their list includes Soda-ash, Alum, Copperas, Aquafortis, Nitric and Muriatic Acids; all the various preparations of Tin for the use of dyers. Of Surgical Instruments, here a full assortment may be selected, of the most approved manufactures.

There is, perhaps, no establishment in the North-West that keeps so large a stock or better assortment of pure Medicinal Preparations; as Solids, Extracts, Concentrated Preparations, Fluids, Fluid Extracts; also, Pharmaceutic Sugar-Coated Pills and Granules, with all new preparations, as this house of Lord & Smith. These last named articles are mostly the preparations of Tilden & Co., so well and favorably known to the medical faculty, wherever the healing art is practiced.

A large supply of pure Native Wines and Brandies for medicinal and sacramental uses, may be found at this establishment.

Mr. Lord, the senior partner, has been engaged in the Drug business, without interruption, for twenty-four years, and for the last five years in Chicago. He succeeded the firm of Bay & Baldwin. Dr.L. H. Smith became a partner in 1859, since when the firm has been Lord & Smith. They removed from No. 43 Lake Street, about the first of April of the present season, to their present elegant location, No. 23 Lake Street. Their store is six stories high, including a fine basement, main building twenty-six by one hundred. This is probably the most extensive drug establishment in Chicago. They do a cash business, and short time to cash purchasers. The whole amount of the drug trade in Chicago will probably exceed $3,000,000 per annum. 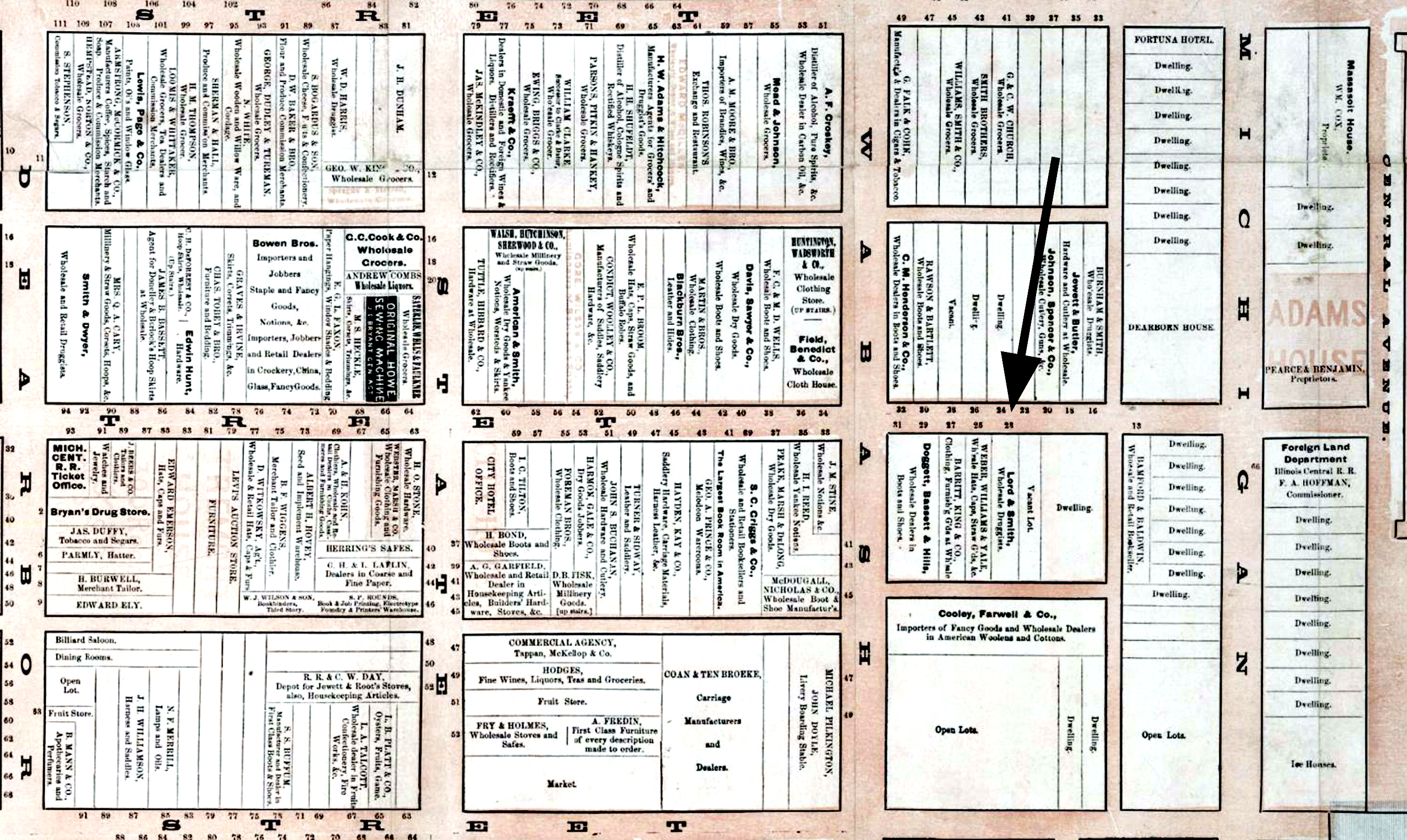 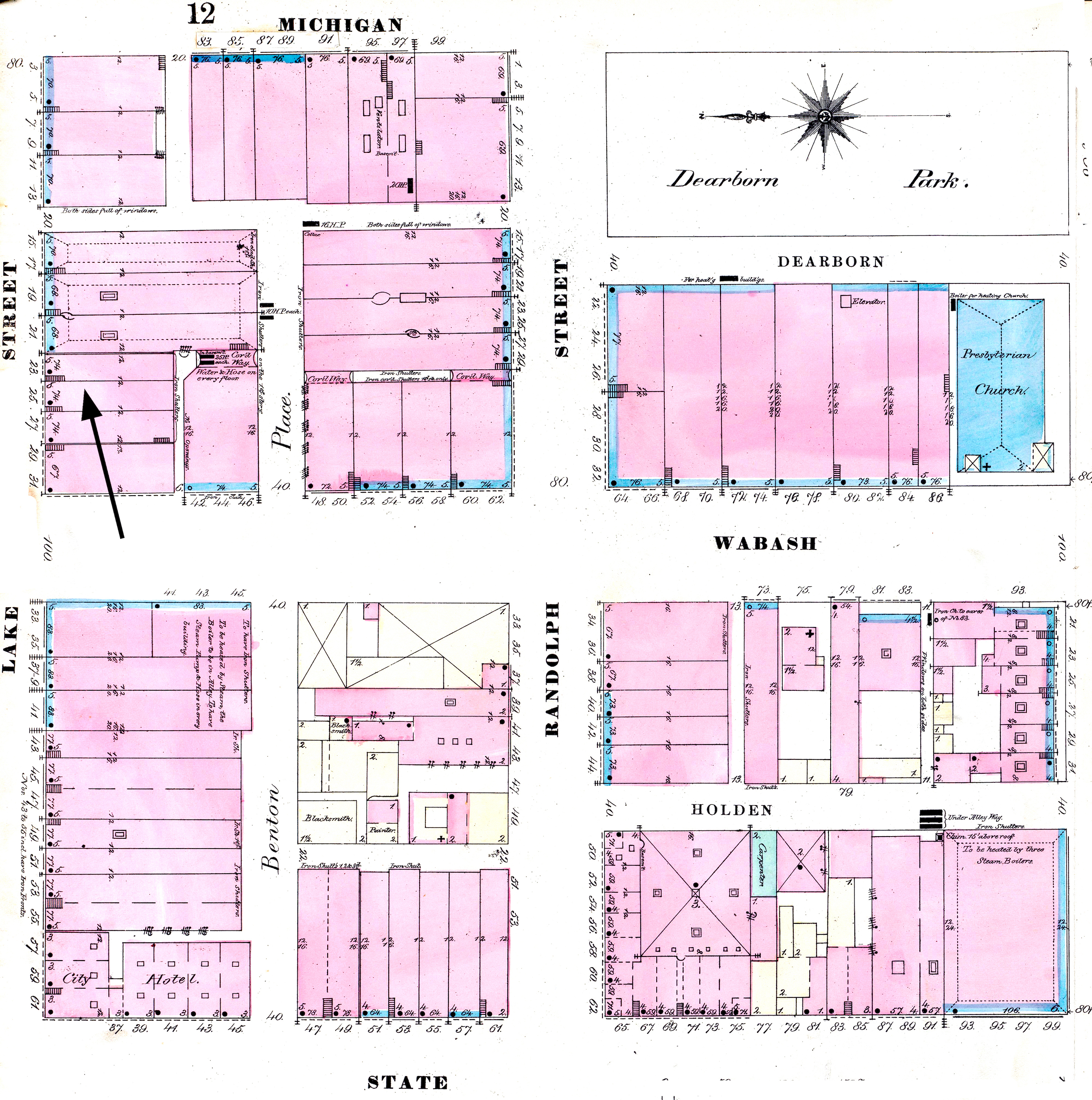 Lord, Owen & Co.—The history of this leading drug house. like that a of great many other commercial institutions of Chicago, is one of self-creation, of early struggles and trials, and of the final triumph of pluck and honesty over many difficulties. The present house is the direct successor of one of the very oldest wholesale drug establishments in Chicago. In 1836, L. M. Boyce was engaged in this business at No. 121 Lake Street. He was ranked aim nig the prominent merchants of those days, until his deatli by cholera in 1849. Then Edwin K. Bay and John Sears, Jr., who had been clerks in his employ, succeeded to the business, conducting it at No. 113 Lake Street until in 1852, when Mr. Hay and William A. Baldwin formed a partnership under the firm name of Hay & Baldwin, at No. 139 Lake, Mr. Sears continuing alone at the old stand until in 1856. In 1857, Thomas Lord, the founder and present head of the firm of Lord, Owen & Co., came to Chicago and purchased the business of Bay and Baldwin. Two years later, Dr. LaFayette II. Smith became a partner, the firm name and style then becoming Lord & Smith. The place of business in 1857, was at No. 139 Lake Street, then at No. 43, where they stayed five years; then at No. 23, where they remained until, in 1868, they removed to No. 86 Wabash Avenue. Here they had erected a handsome five-story stone-front building. In that year, G. W. Stoutenburgh was admitted as a partner and the firm name was then changed to Lord, Smith & Co. At the time of the great fire this firm was burned out, net losses on and sustaining building stock amounting to $150,000. Notwithstanding the immense loss they had sustained, they immediately resumed business in a shanty erected on old Dearborn Park, and also began rebuilding on the site of their old location. The new building, which was a substantial six-story brick and stone structure, was completed and occupied in the spring of 1872. In 1876, Dr. Smith sold his interest in the business to Messrs. Lord and Stoutenburgh, at which time, also G. S. Lord, son of Thomas Lord, and James R. Owen were admitted as partners, the firm name and style then changing to Lord, Stoutenburgh & Co. Each year now showed a rapidly increasing trade, which by 1880, had reached proportions making it necessary to seek larger quarters; these were accordingly found at their present location, Nos. 72 and 74 Wabash Avenue. Here they occupy six large floors, having an aggregate area of fifty thousand square fet, while in their immense business, which yearly amounts to considerably more than one million dollars and extends over the entire Western and Northern States and Territories, nearly one hundred assistants are required. In February, 1884, Mr. Stoutenburgh retired from the firm, which then changed to its present style of Lord, Owen & Co., being composed of Thomas Lord, George S. Lord, and James R. Owen.