This fine new block is among the better class of structures in our New Chicago, erected by the Bowen Bros., for the use of the great auction house of Wm. A. Butters & Co., who, in occupying it, get back to the old spot where so great a success was made by them before the fire. It is one of the roomiest and lightest buildings in the city, perfectly adapted to the business of this extensive firm, as it is fitted with all the modern improvements, steam elevators, etc. 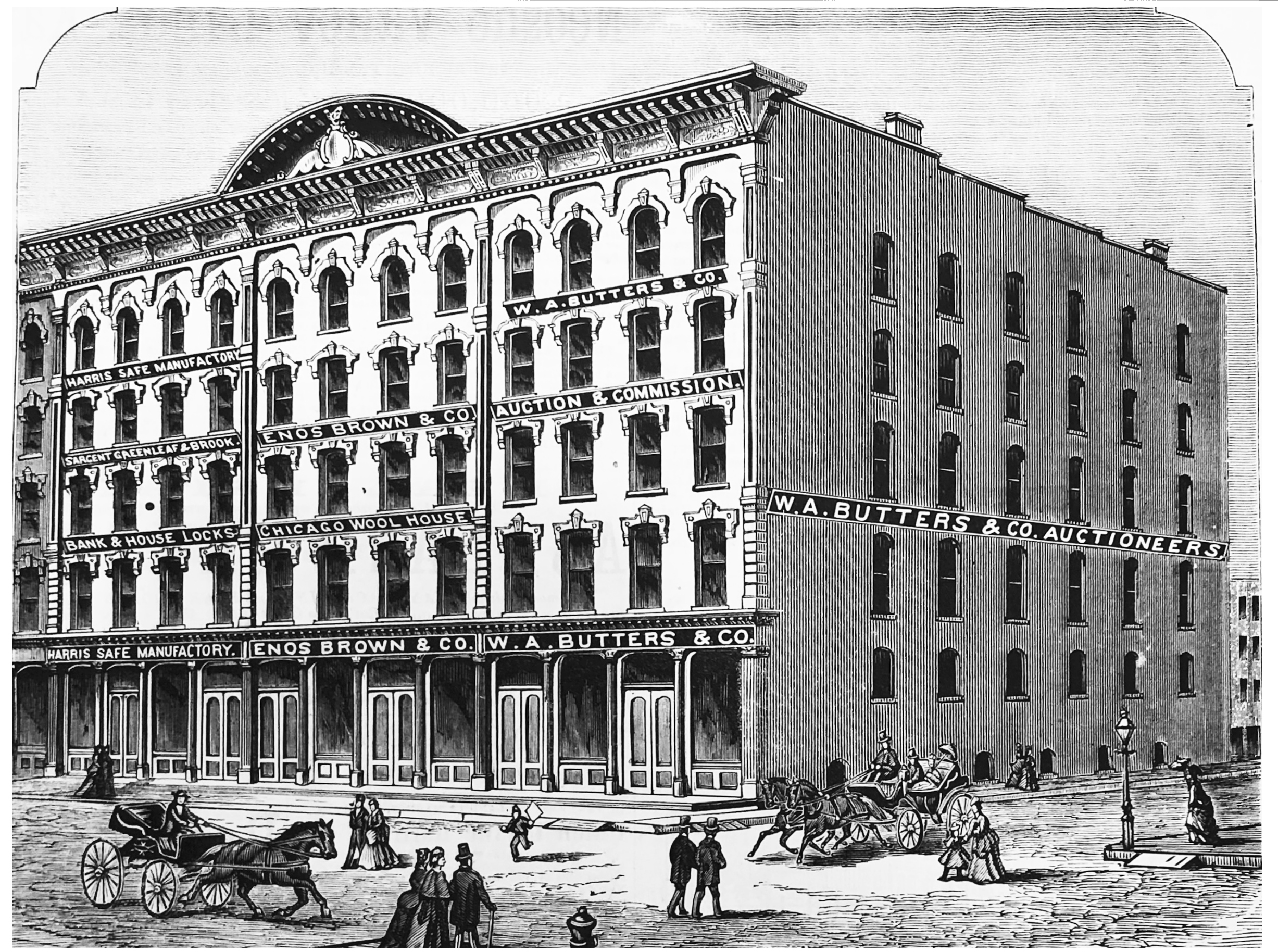 We doubt if there is a business house in Chicago that is more generally or favorably known. Mr. Butters was born in New Hampshire and brought up in Boston as a professional auctioneer, commencing at the bottom of the ladder, having first occupied the position of store boy and subsequently that of book-keeper, then of clerk, until now he has nearly or quite reached the top of the ladder, being the head of as large and prosperous an auction business as there is west of New York. With him, auctioneering is not only a profession, but almost an art. His son, Wm. H. Butters, who is junior member of the firm, has been educated to this same work in a most thorough manner. In 1856, Mr. Butters, Sr., came to Chicago and opened the auction business at 99 Dearborn st., in a store 17½ by 40 feet, his total sales for the first year was $42,000. 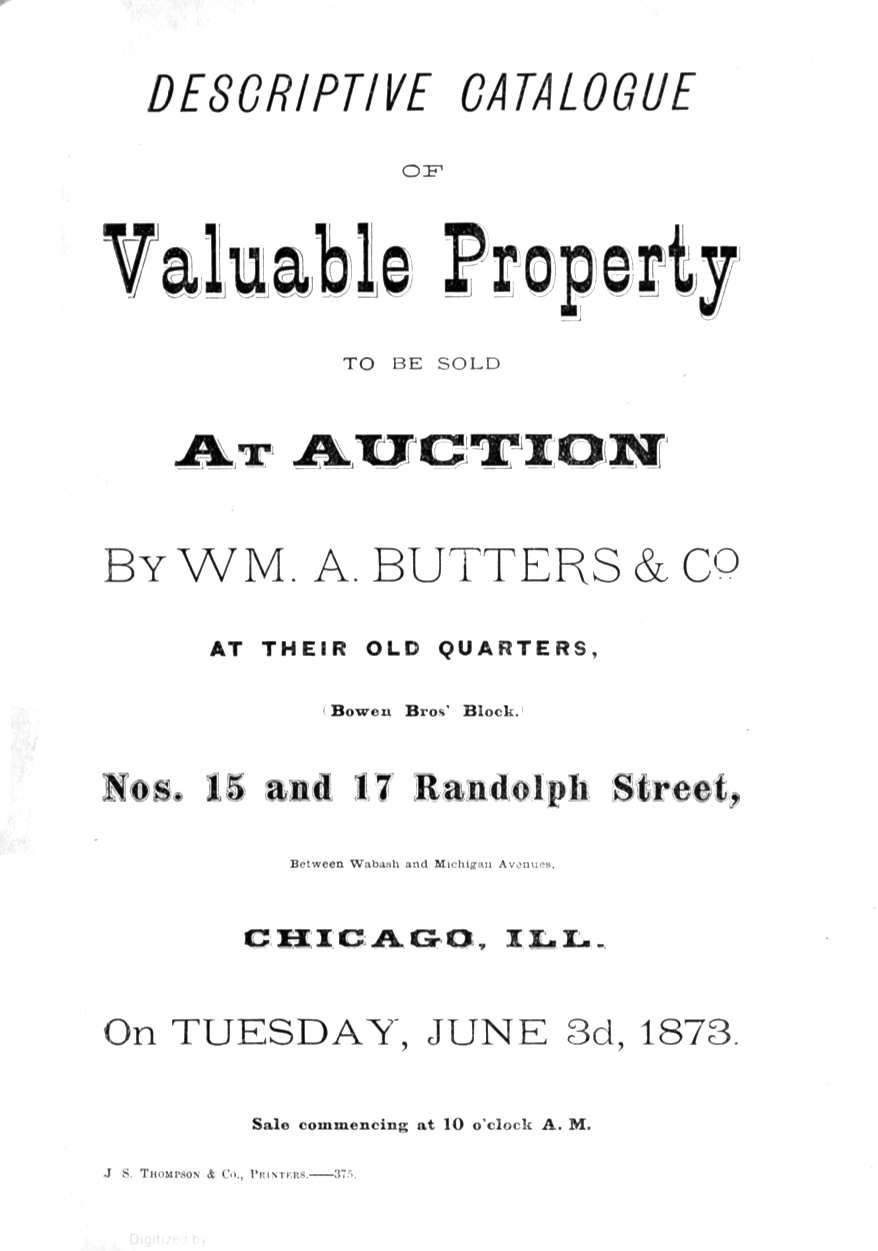 In 1857 he moved to 76 Dearborn street, where he remained for two years. In 1859 he again moved, occupying Nos. 46, 48 and 50 same street, and here he remained three years. In 1862 he moved into Portland Block. From there he removed to 44 Randolph st., January, 1866, each time moving into a larger and better place, being necessitated to do so by his rapidly increasing business.

From these quarters the firm soon removed to the spacious building erected for their occupancy, where the fire found them, and where they met the common fate of all on the memorable October 9th. This structure was 86 feet front by 80 deep, and was known as Nos. 5, 7, 9 and 11 Randolph street. It was five stories and basement high, cost $50,000 and was occupied from basement to roof by Wm. A. Butters & Co.

But to such men as Wm. A. Butters a small fire like the one of October 9th, 1871, was no set back. Scarcely had the embers cooled before he was up and doing. A large and commodious temporary building was hastily run up, and the old flag flung to the breeze. This establishment was christened “Red Front,” and as such has passed into the history of the great conflagration. Here the business went on uninterrupted for some months, when P. W. Gates, Esq., erected for Mr. Butters a large and commodious brick block on Canal st., where he removed, and where the business has been carried on up to this date, having been extended by the addition of several new features, among them a regular horse and carriage mart.

The extent to which the auction and sale business of the city has grown for the last few years would surprise those who have not taken occasion to pay the subject any attention. No person resident in the city could have failed to notice the multiplication of auctiioneering firms, though not, perhaps, the unexampled increase of business of particular firms claiming, as they do, to stand at the head of the entire business of the city. The expansion of the firm W. A. Butters & Co. may be taken as a fair illustration of the fact to which we have alluded.

The position and influence of this house is of interest to land men at this time, as they have recently inaugurated weekly sales of real estate under the hammer, which have proved eminently successful and which they will continue during the season. These sales mark a new era in real estate in this city, as they tend to move the market and find customers for any class of property. Being conducted upon a straight forward and bona fide basis, they are destined to grow more and more popular with the public. 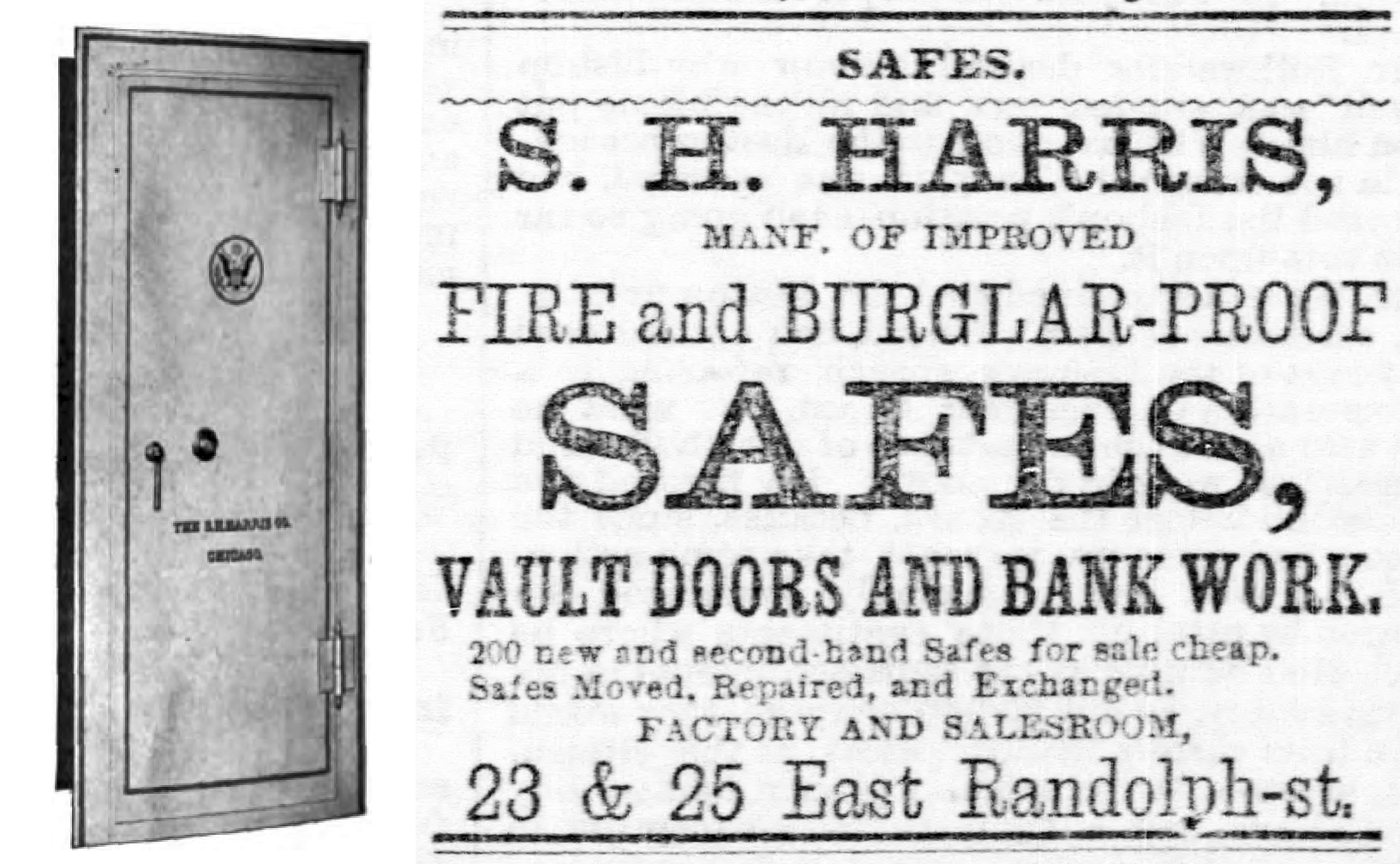 The eminent success and present high standing of this firm demonstrate what perseverance, integrity and upright dealing will do. While many auction firms have risen and gone down in the city, the course of this has been constantly one of advancement and progression, until to-day it controls an immense capital and enjoys an enviable position.

OTHER FIRMS.
In this block are also located Messrs. Enos Brown & C. and S. H. Harris, manufacturer of of Harris’ celebrated safes, who are now established in their new quarters. Their location in the building will be seen by reference to our engraving.

QUITE A FIRE. It Occurred Yesterday Morning, and Damaged Nos. 23-25 Randolph Street to the extent of $25,000.
The largest fire Chicago has seen for a month or two happened early yesterday morning. At 4:53 an alarm was sounded from box 25,and at 5:05 o’clock a “second” was turned in. The fire was found in the five-story and basement building, Nos. 23 and 25 Randolph street, just east of Wabash avenue, owned by David R. Green, of Boston, and known as the Harris Safe Manufacturing Company’s building. Premises insured as follows: In the Continental Fire, $2,500; Commercial Union, $2,500; Standard of New Jersey, $2,500; Niagara, $2,500; and Phoenix of Brooklyn, $5,000. Total, $15,000, to which may be added $450 insurance on plate glass. Damage to building, about one-third of insurance.

The basement, first part of fourth and fifth floors were occupied by S. H. Harris, manufacturer of safes and bank vault doors; loss, from $4,000 to $5,000; no insurance. The second floor was unoccupied.

The third floor was occupied by E. T. Harris & Co., nickel platers, polishers, and stove dealers; loss about $6,000; no insurance. 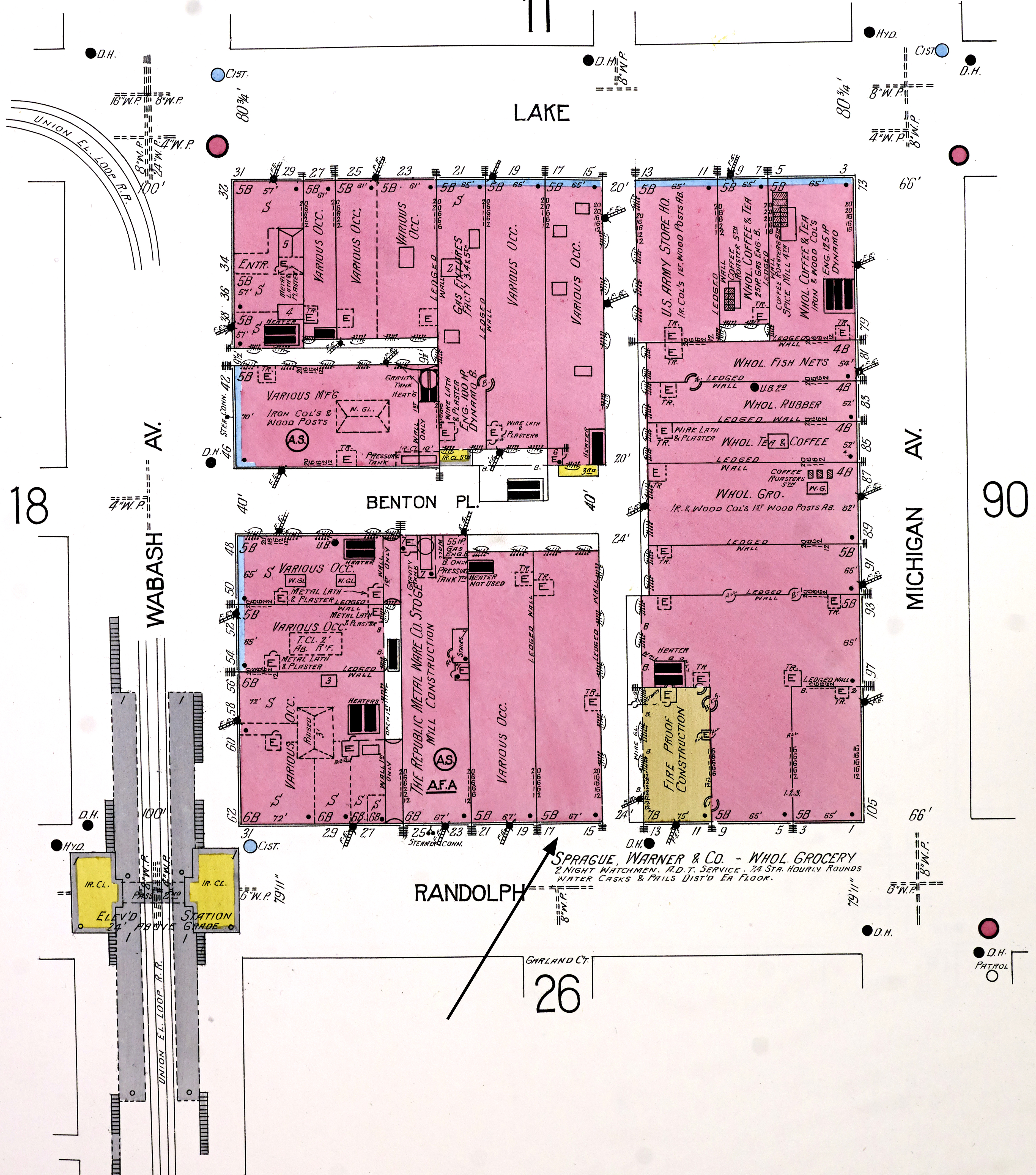 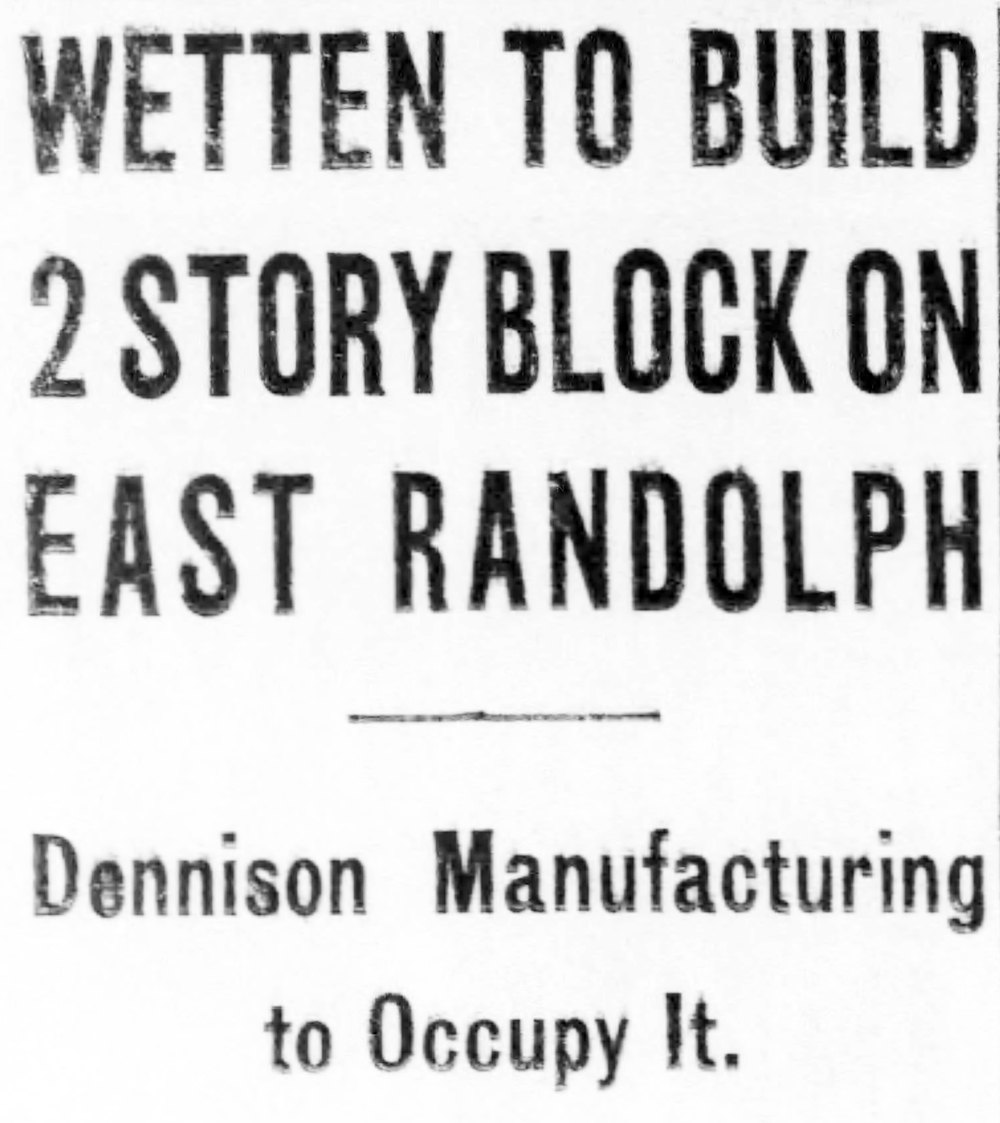 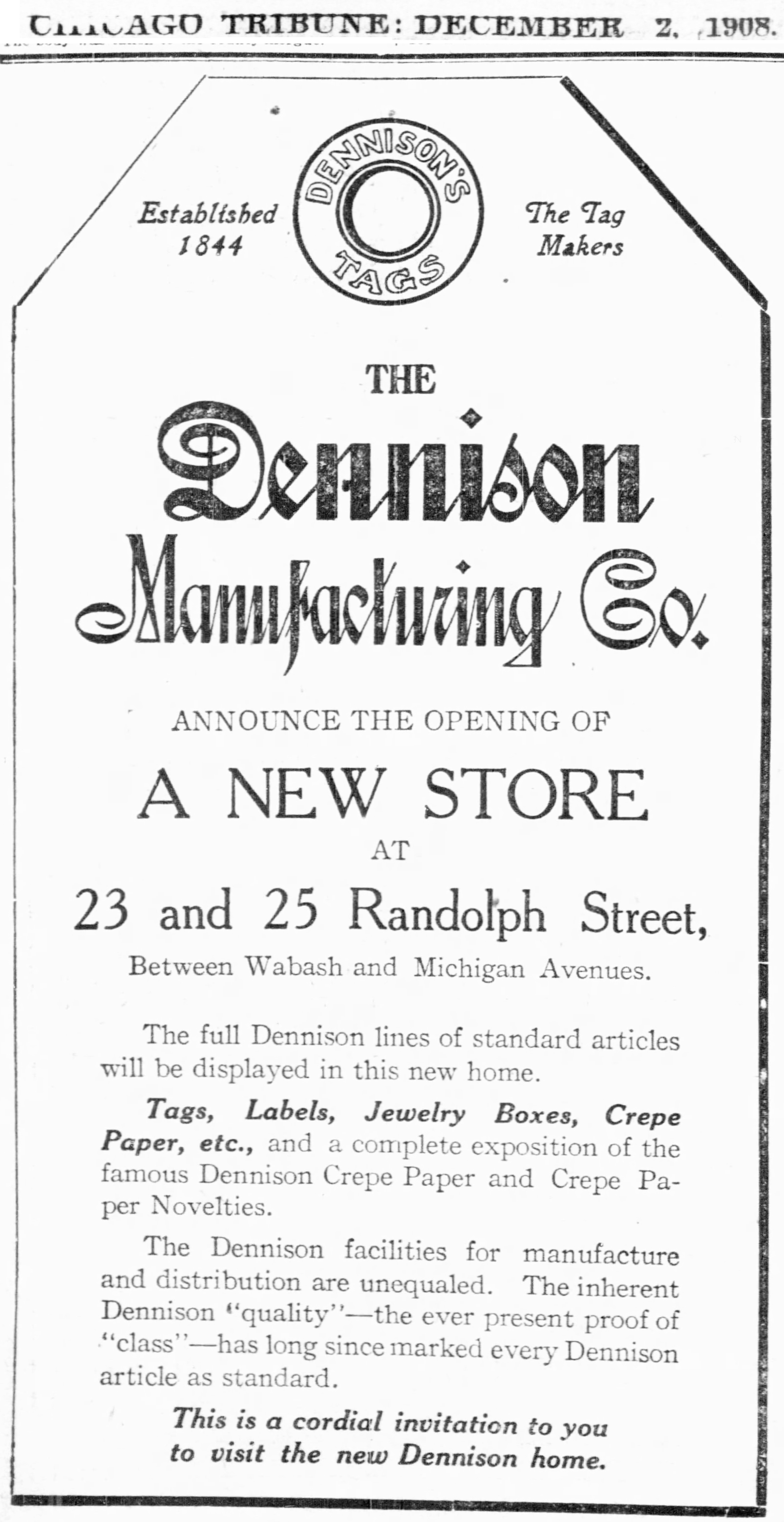 Wreckers will start tearing down the six story building at 62-64 East Randolph to make way for a modern two story fireproof structure to be erected by Albert H. Wetten, owner of the property, for the exclusive use of the Dennison Manufacturing company. That concern, which has maintained Chicago wholesale offices and a retail store since 1868, has been at the Randolph street address for the last three decades.

Temporary quarters for the retail department will be opened by the Dennison company at 227 North Michigan avenue. Its wholesale department will be located in the Le Moyne building, 180 North Wabash avenue, until the new structure on Randolph is completed next fall.

Foundations for More Stories.
The new building, designed by Mundie, Jensen, Bourke & Havens, architects and engineers, will occupy the entire 40 by 168 site, and will have foundations capable of carrying additional stories, if needed. There will be no center columns, an unobstructed span being planned for the full width of the building.

The Dennison Manufacturing company is one of the oldest concerns of its kind in the country, having been founded in 1844 and since that time has manufactured tags, labels, crepe paper, boxes, and a variety of paper items.

Located inside Gallery 37 Center for the Art, on East Randolph Street, the 99-seat black-box theater represents an intimate alternative to the enonnous Oriental, Palace and Chicago Theatres nearby. 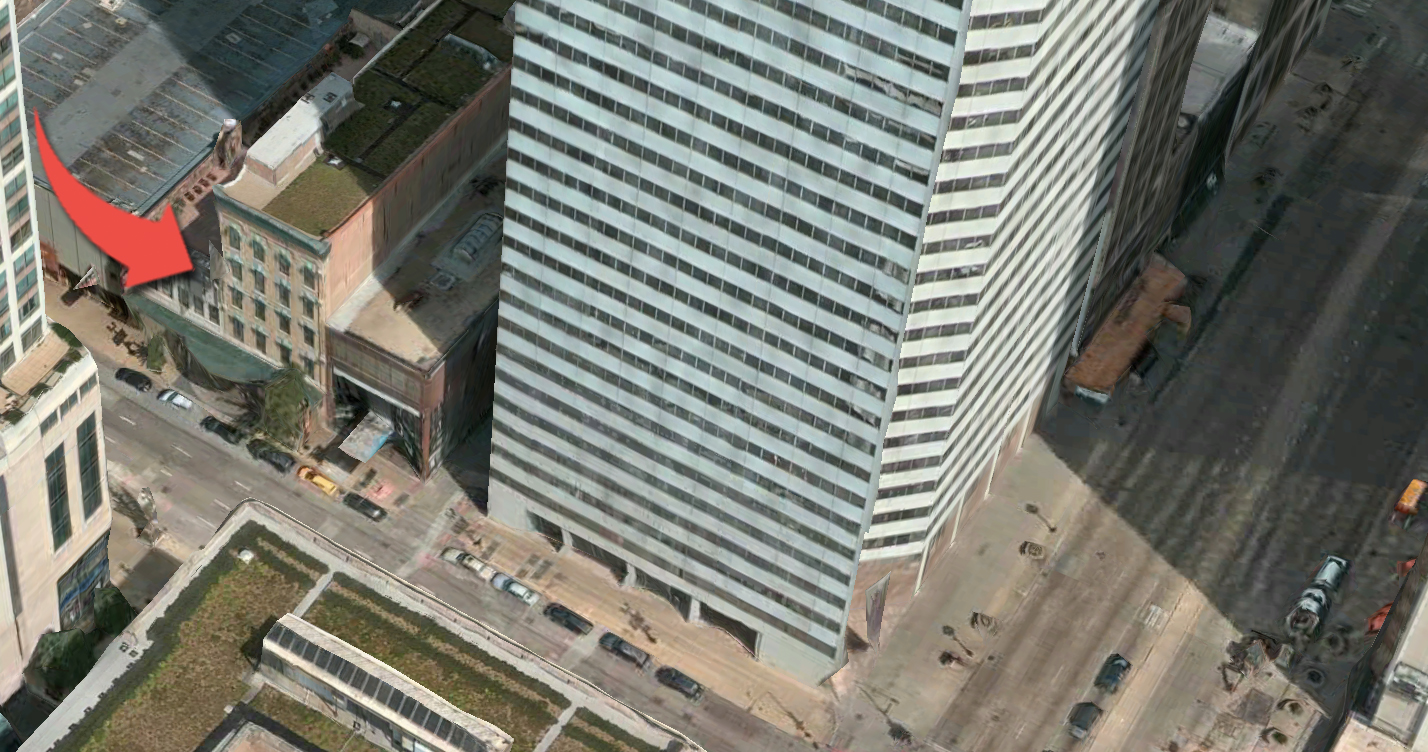