We doubt there is a business house in Chicago that is more generally or more favorably known. Mr. Butters was born in New Hampshire, and brought up in Boston as a professional auctioneer. Commencing at the bottom of the ladder, having first occupied the position of store boy, and subsequently that of book-keeper, then of clerk, until at present he has nearly, or quite, reached the top of the laddr, being at the head of as large and prosperous an auction business as there is west if New York. With him auctioneering is not only a profession, but almost an art. His son, Wm. H. Butters, who is a junior member of the firm, has also been educated to this same work in a most thorough manner. In 1856 Mr. Butters, Sr., came to Chicago and opened the auction business at 99 Dearborn street, in a store 17½ x 40 feet, his total sales the first year being $42,000. 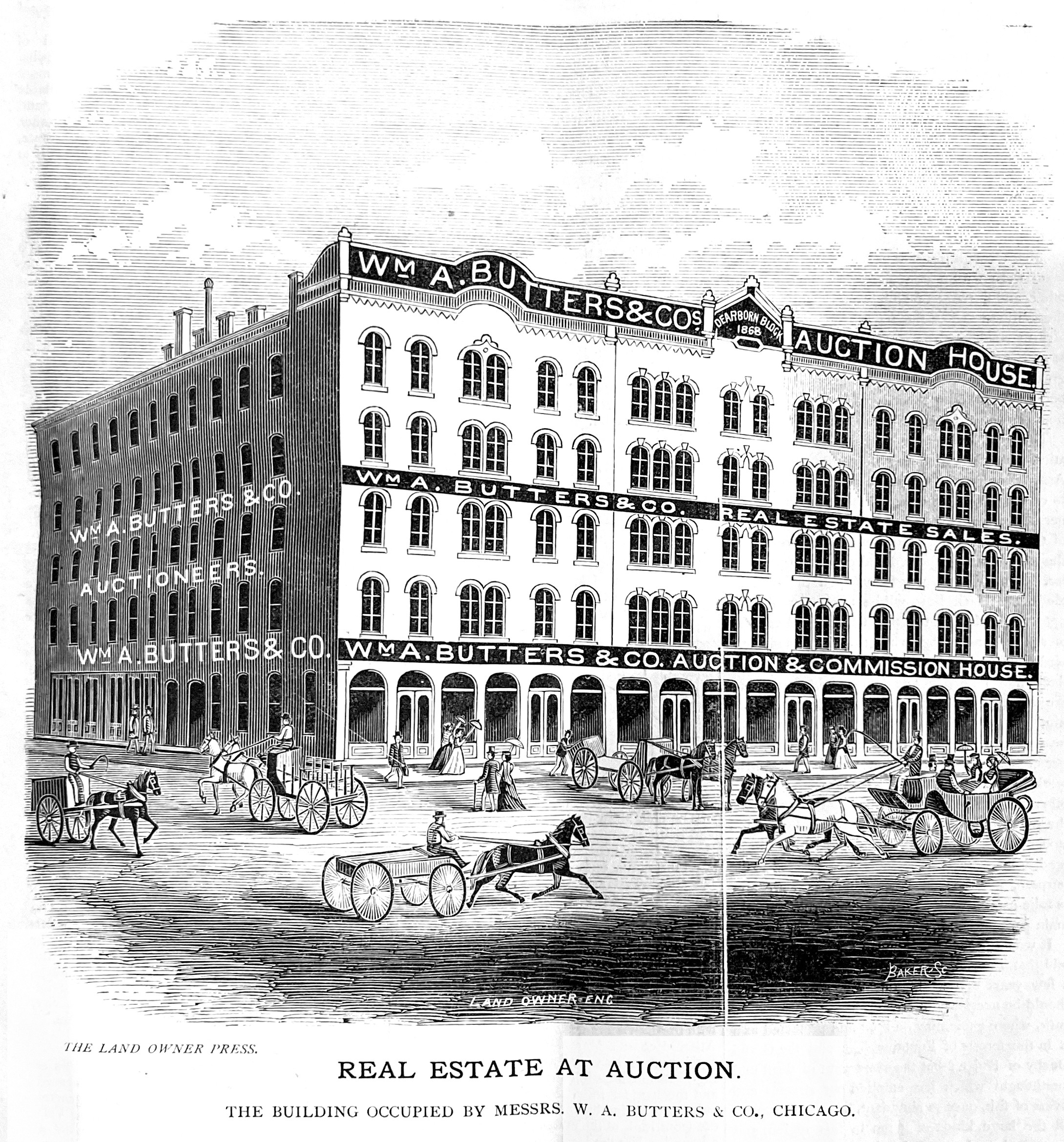 In 1857 he moved to 76 Dearborn street, where he remained for two years. In 1859 he again moved, occupying Nos. 46, 48 and 50 same street, and here he remained three years. In 1862 he moved into Portland Block. From there he removed to 44 Randolph st., January, 1866, each time moving into a larger and better place, being necessitated to do so by his rapidly increasing business.

From these quarters the firm soon removed to the spacious building shown in our engraving, the building having been erected especially for their accommodation, by Hon. J. Y. Scammon, of this city, in accordance with plans by Mr. Butters himself. This edifice is among the best in the city. It is brick fronting on Dearborn Park, and will consequently always have an unobstructed front view. Its size is 86 feet by 80 feet.

The walls are two feet in thickness at the bottom, eighteen inches at the second story, and one foot at the top, and is eight feet above the roof all around. There are five stories and a basement. The front is excellently lighted, while the east, north and west sides are fire-proof, the windows on these sides being of prismatic glass. The entire building cost $50,000, and is admirably adapted to the purpose for which it is intended.

The extent to which the auction and sale business of the city has grown for the last few years would surprise those who have not taken occasion to pay the subject any attention. No person resident in the city could have failed to notice the multiplication of auctioneering firms, though not, perhaps, the unexplained increase of business of particular firms. Claiming, as they do, to stand at the head of the entire business in the city, the expansion of the firm of W. A. Butters & Co. may be taken as a fair illustration of the fact to which we have alluded. 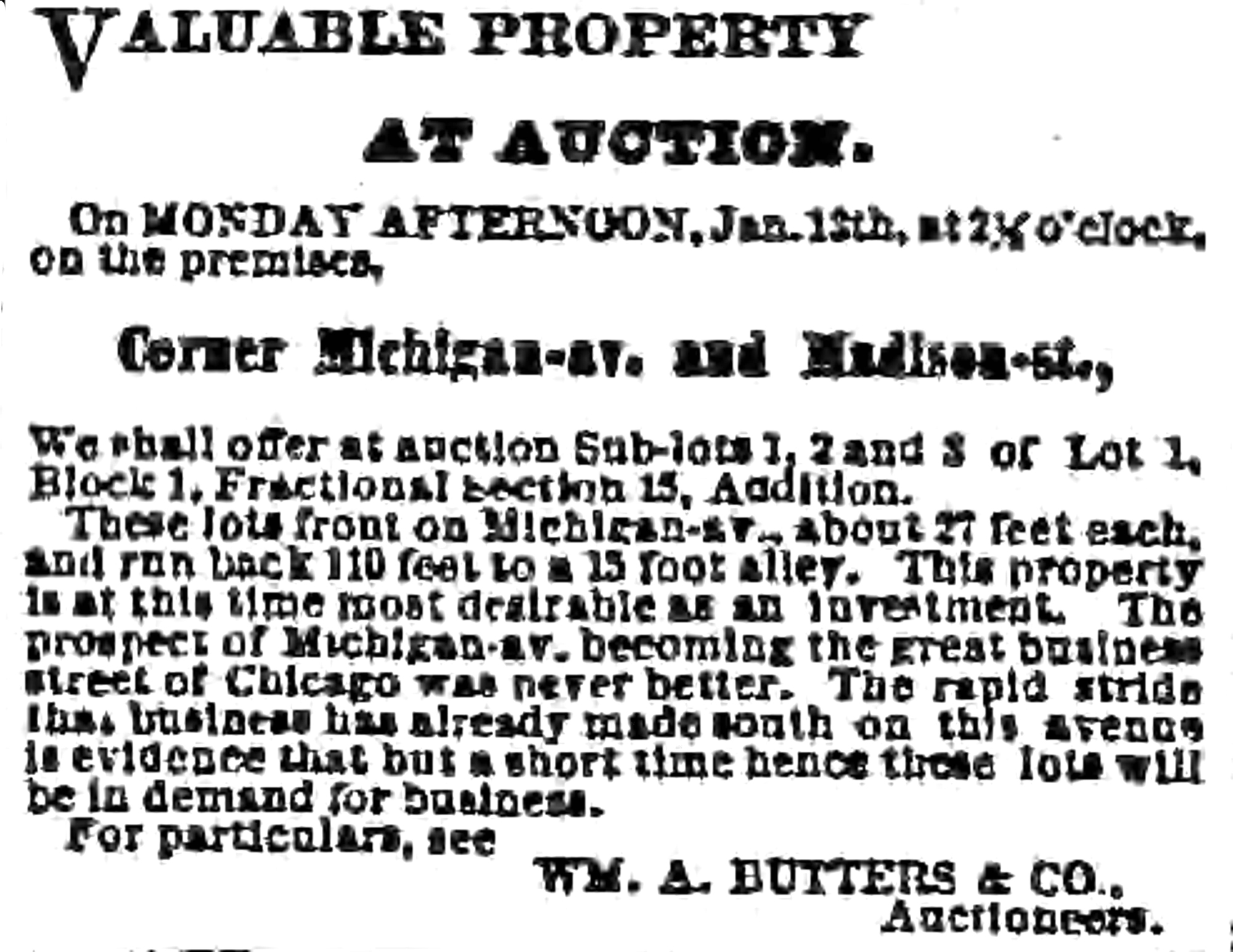 The position and influence of this house isn of interest to land men at this time, as they have recently illustrated weekly sales of real estate under the hammer, which have proved eminently successful, and which they will continue during the season. These sales mark a new era in real estate in this city, as they tend to move the market, and find customers for any class of property. Being conducted upon a straight forward and bona fide basis, they are destined to grow more and more popular with the public.

The eminent success and present high standing of this firm, demonstrates what perseverance, integrity, and upright dealing will do. While many auction firms have risen and gone down in the city, the course of this has been constantly one of advancement and progression, until to-day it it controls an immense capital and enjoys an enviable commercial position. 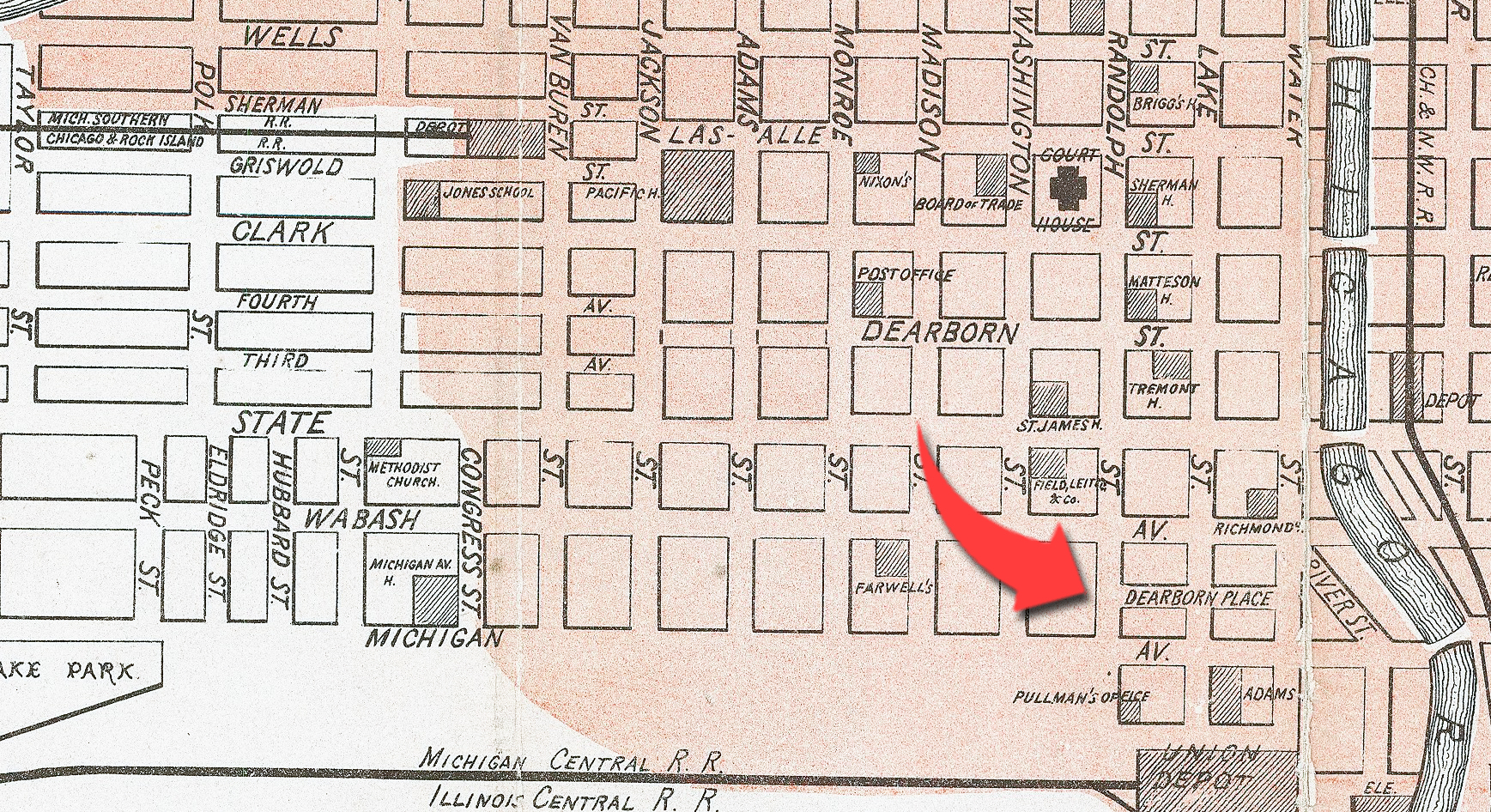 Dearborn Block I was destroyed by the Great Fire of 1871, but was rebuilt in 1872 as Dearborn Block II. Butters & Co., however, moved into the second Bowen Building at Nos. 15 and 17 Randolph Street, between Wabash and Michigan Avenues.