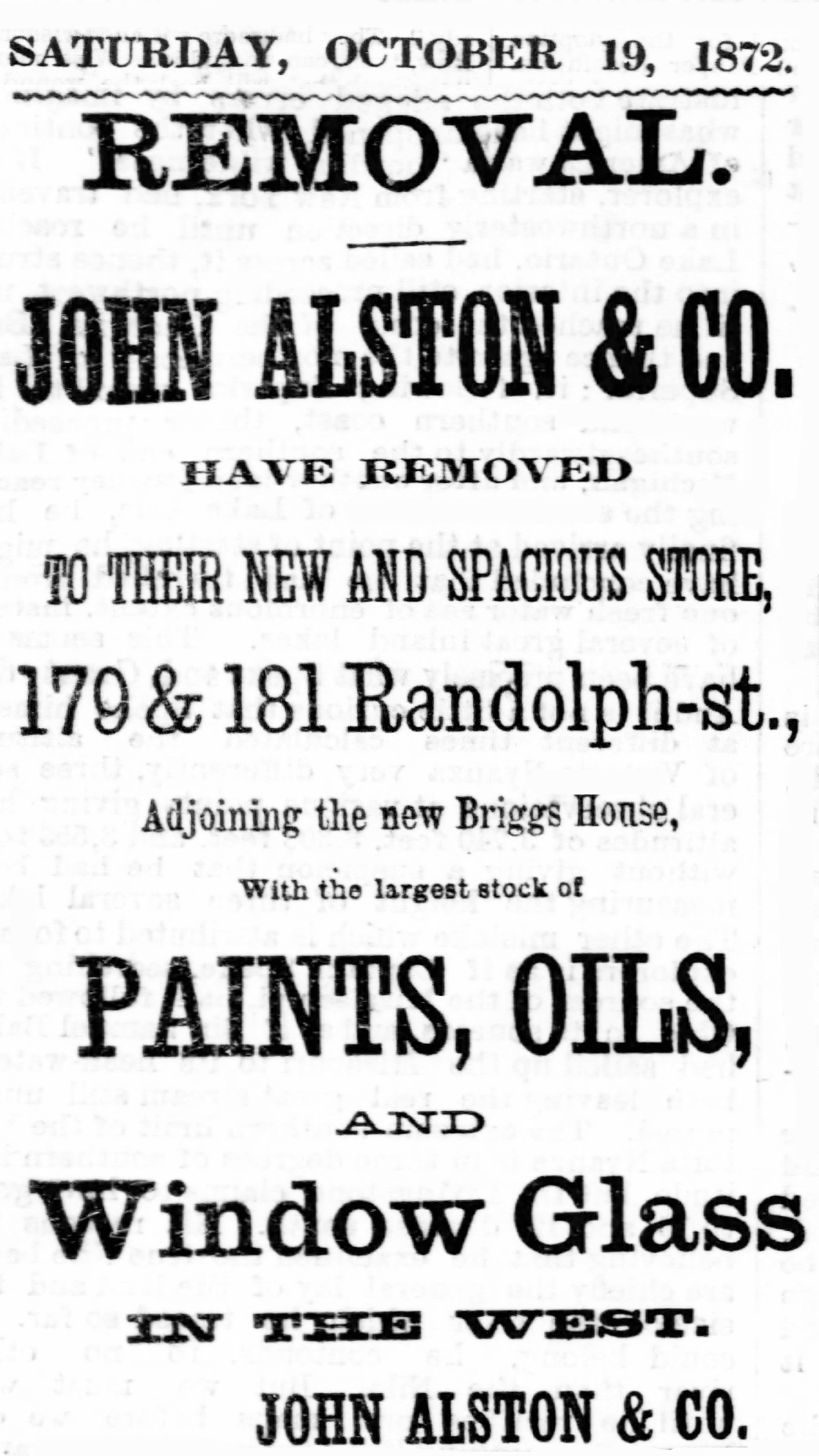 NEW BUILDING OF JOHN ALSTON & CO.
This attractive structure is another link in the long line of buildings going up on Randolph street, in the burnt district. It is situated adjoining the new Briggs House, whose growing front is seen in the engraving. Its dimensions are 40×165 feet, five stories high with a deep basement. The first story is of iron and plate glass, the upper stories of Cleveland free stone. Its interior is finished in the most perfect manner, heated by steam throughout, with steam elevators and every convenience necessary for the transaction of a large business.

Messrs. John Alston & Co., whose energy and enterprise is adding this fine structure to Rebuilt Chicago, are extensive dealers in glass, paints, oils, etc. This house was established here in 1848, and up to this date, through all the vicissitudes of trade, through stump-tail times and the terrible days of the great fire, has never faltered, but has ever sustained its credit and preserved untarnished its upright character. At the time of the late calamity it held the largest stock of glass and paints west of New York City, which were entirely consumed. Since the fire at their present temporary stores 57, 59 & 61 North Desplaines streets and 56 Jefferson street, they have carried stock sufficient to enable them to almost double the business of any former year. They expect to occupy their new store about the 1st of October.

This house is sole agent for the Ottawa Glass Company, and sell the product of this company’s glass factories, besides receiving large supplies from Pittsburgh and Eastern companies. They also keep a large stock in large sizes of English and French sheet and rough plate glass, and have been agents for the French and British plate glass companies for upward of twenty years in Chicago, represented in New York by Messrs. Noel, Saurel & Antoine and Roosevelt & Son.

Their stock of strictly pure white lead is very extensive from the best Eastern and Western manufactories. Genuine and pure colors, dry and ground in oil, oils, varnishes, and painter, glaziers, and gilders materials, all sold at the lowest wholesale prices. While they keep goods of every quality, their aim has always been to be able to supply dealers and consumers with genuine and pure goods, from the finest factories in America and Europe. Buyers will do well to give them a call, as well to make purchases of stock, as to look through their new and finely arranged building. 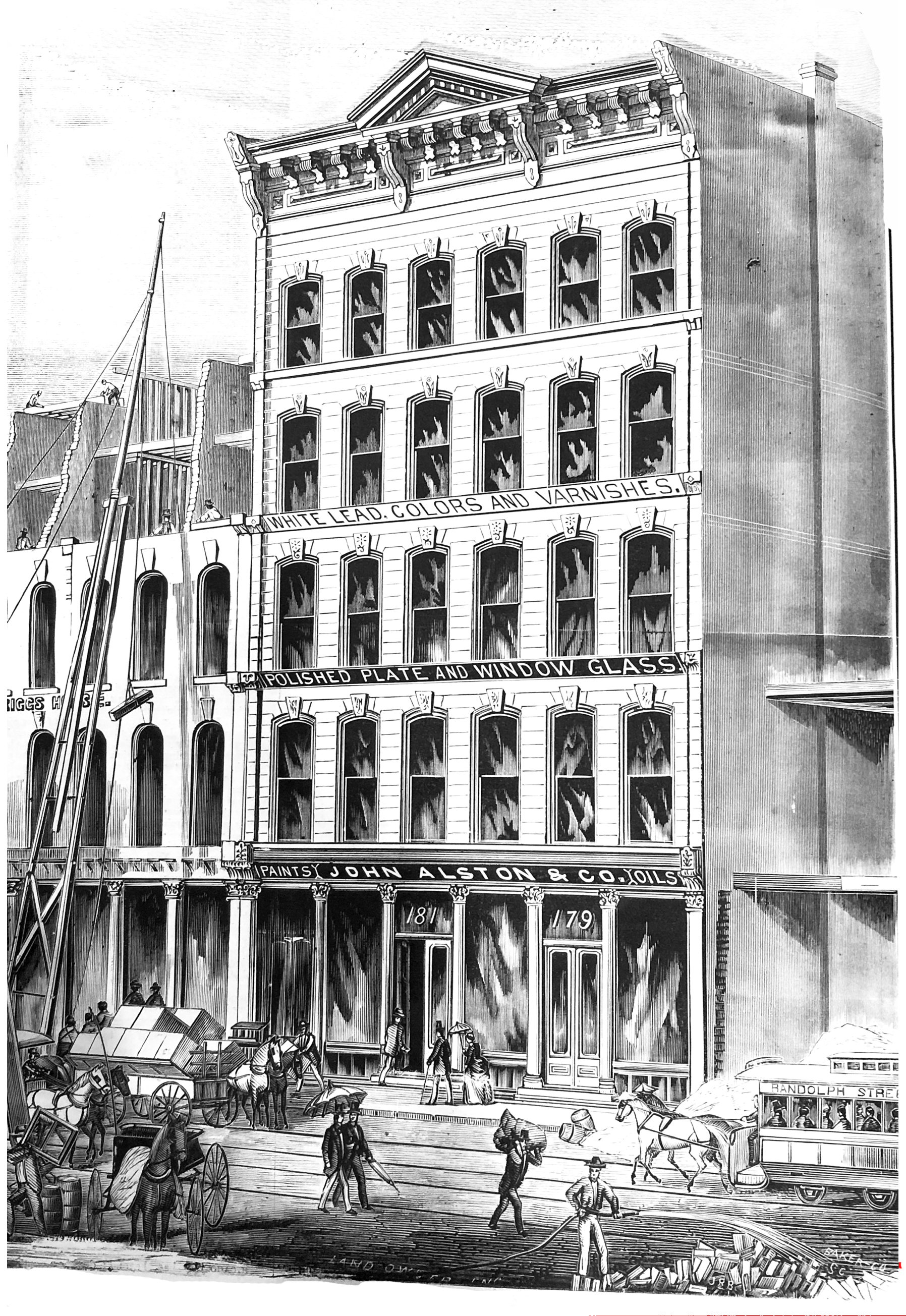 OBITUARY.
JOHN ALSTON, Chicago, died of kidney troubles on Jan. 12, 1899, aged 78. He was of the Alston Manufacturing company, dealers in paint, 177 Randolph street. He lived at 90 Lincoln Park boulevard. Mr. Alston was the oldest merchant in Chicago. He was a native of Scotland, and came to America in 1820. Sixteen years later he moved from a farm at Dundee, Ill., to Chicago, and engaged in the paint and oil business. He was a clerk in the employ of Alexander White for several years before he engaged in business as a partner in the firm of Alton & Thompson. During the term of “Long John” Wentworth as Mayor, Mr. Alston was elected Alderman. He did not like politics, and after one term retired. He was twice married, and leaves a widow and three grown children, the latter of whom are all married. Members of St. Andrew’s society will attend the funeral. 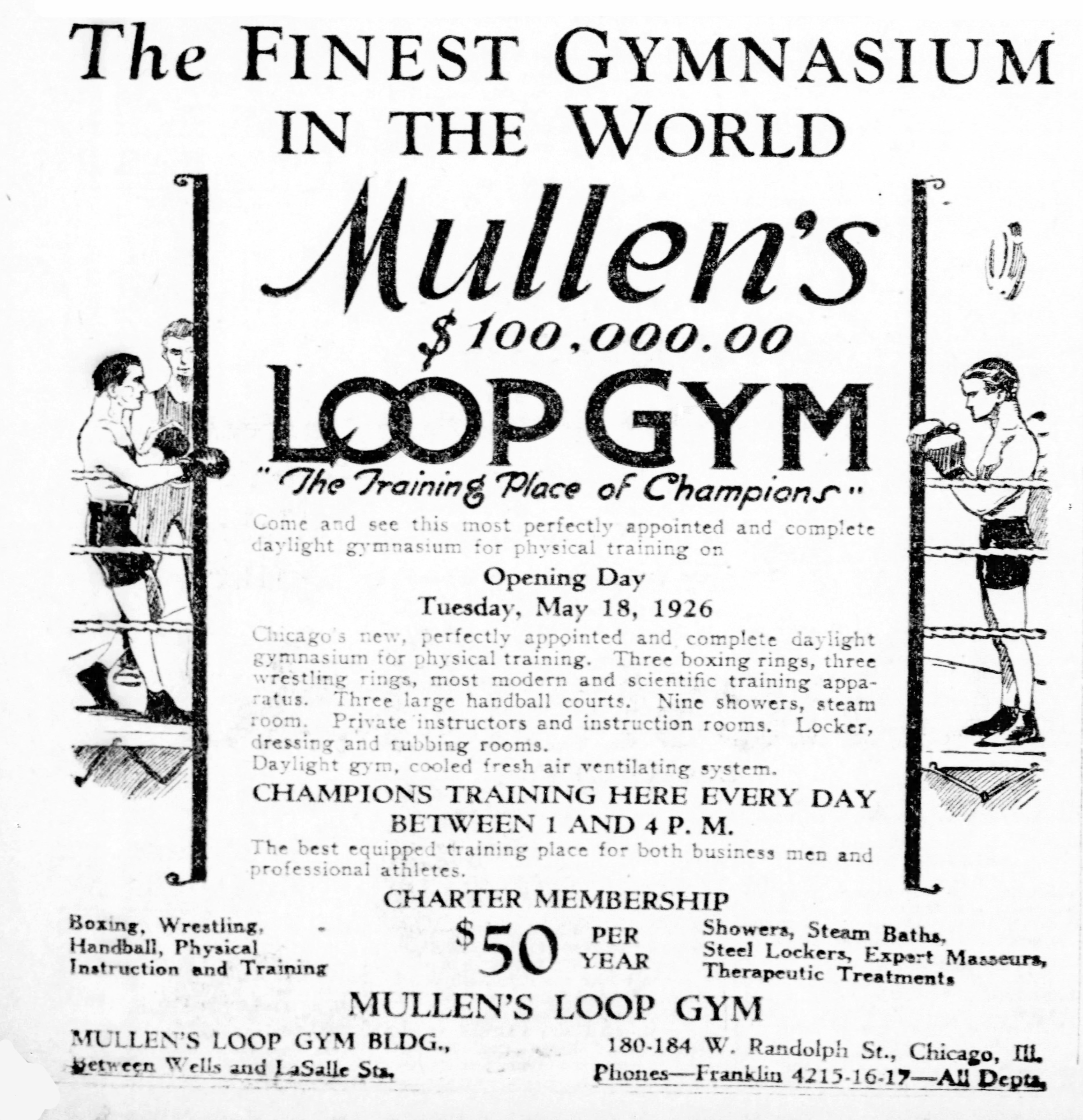 Hundreds of boxing fans visited Jim Mullen’s new gymnasium at 180 West Randolph street yesterday. One of the rings was filled with flowers from friends of the promoter, and many telegrams were received from all sections of the country. Among them were wires from Strangler Ed Lewis, Jack Dempsey, Mickey Walker, Jack Kearns, Billy Gibson, Gene Tunney, Fidel La Barba, and Phil Rosenberg.

Joe Brown, identified for the last few years with the management of Jim Mullen’s gymnasium at 180 West Randolph street, announced yesterday that he had taken over the establishment and will run the place under the name of “Brown’s Gymnasium.” 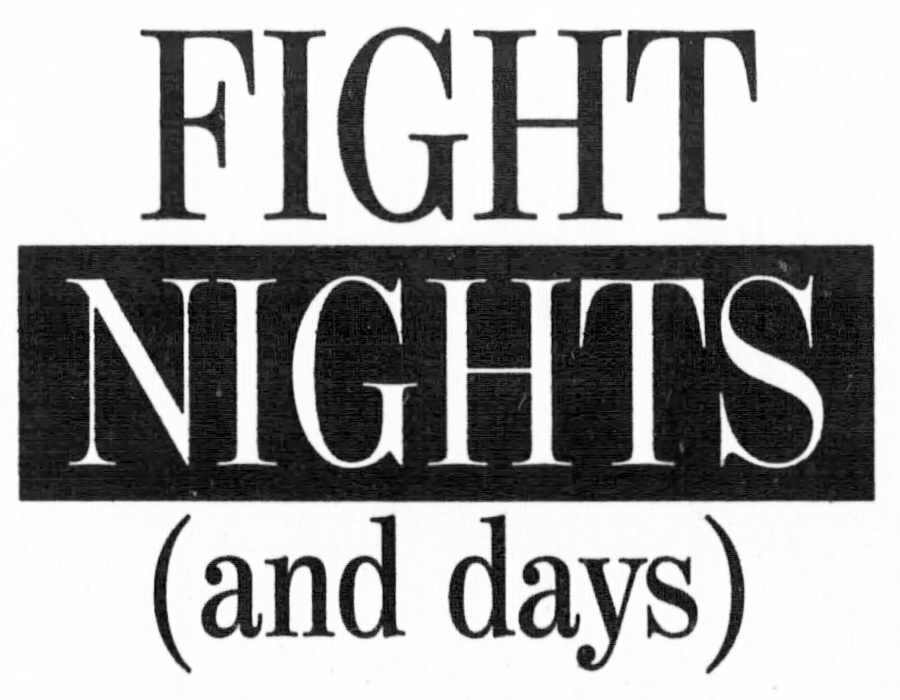 In the `30s and early `40s boxers trained in George Trafton`s gym on Randolph Street. In a haze of cigar smoke, fight figures cut deals, bought and sold fighters` contracts and promoted bouts. Top-ranked boxers from all over the world honed their skills in the unsanitary atmosphere.

Trafton was a former center with the Bears, and his boxing expertise was limited to a four-round bout with Art Shires, a White Sox first baseman. The two men fought, if you can call it that, in White City Arena. Obviously out of shape, Trafton and Shires spent most of the bout gasping for breath while seasoned fight fans covered their eyes. Baseball Commissioner Kenesaw Mountain Landis told Shires to stick to baseball, to the relief of respectable boxing people everywhere.

The John R. Thompson company yesterday bought the five story building at 180 W. Randolph st., 40 by 180 feet, for $160,000 from William McCormick Blair and others. The buyer occupies the first floor with a restaurant and uses the two upper floors for warehousing. 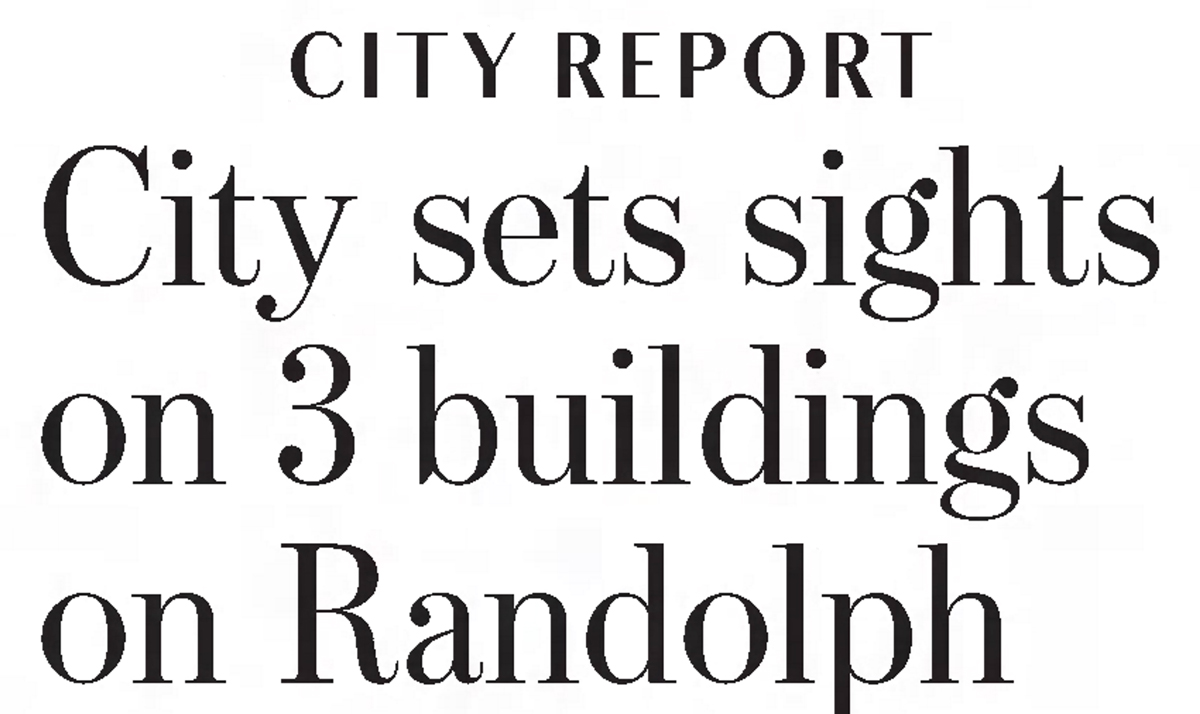 By Jeanette Almada, Special to the Tribune.

City officials are scrambling to acquire three privately owned, underused downtown office buildings to assemble a site to offer to developers by mid-summer.

The buildings are standing in the way of substantial investment in the surrounding Randolph Street Theatre District, city officials said.

City officials expect to issue a mid-summer request for development proposals concerning the three properties and a fourth city-owned property at 174 W. Randolph, according to Ty Tabing, assistant commissioner at the Chicago Department of Planning and Development, who spoke Monday before CDC commissioners. The city hopes to find a developer who will build on the three smaller properties, Planning Department spokesman Pete Scales said in a phone interview Tuesday.

The CDC approval allows Planning Department staff to begin what could be a complex acquisition process.

The tower at 188 W. Randolph is in bankruptcy proceedings and is encumbered with several liens and many building code violations.

One of those liens is the city’s, seeking reimbursement of $3.4 million spent on “nuisance abatement,” the term the city used in its housing court complaint to describe costs associated with city construction of a protective canopy around the building after city inspectors found cracked windows and loosened or distressed terra cotta on the building in 2001.

“CDC approval allows us to get estimates and appraisals of these buildings, and to begin negotiations with owners [of 178 and 180 W. Randolph],” Scales said.

The city’s ability to acquire 188 W. Randolph, using its eminent domain authority if needed, will depend on approval of the bankruptcy court, Tabing told CDC commissioners.

“Everything is decided in bankruptcy court, after the judge decides what we will pay for [the 188 building],” Scales explained in an interview.

Further complicating its effort to redevelop that corner is the impending expiration of the Central Loop TIF in 2006, according to Tabing.

Planning Department staff abandoned several previous steps to acquire 178 and 180 W. Randolph. Owners of both buildings implied that either redevelopment or tenancy for their building were close at hand, Tabing told the CDC.

“[Planning Department] action to acquire the 180 W. Randolph building was halted in October 1999 after the owner told us once again that they were on the verge of signing a lease and securing financing. That never occurred and Randolph Properties Ltd. Partnership sold the property to Asia Pacific in 2003,” Tabing told commissioners.

The building at 178 W. Randolph was also sold to a new owner in the last year. Bill Ryan, of Bryan and Ryan, attorney for that building’s new owner, Ken Weber of Kenmile Companies in Northfield, complained to commissioners that his client only bought the building in 2003 and stressed the city could save $4 million to $5 million by allowing Weber to rehab the building. Tabing responded that Weber’s proposal for the entire site would be welcome once the city issues its request for development proposals. 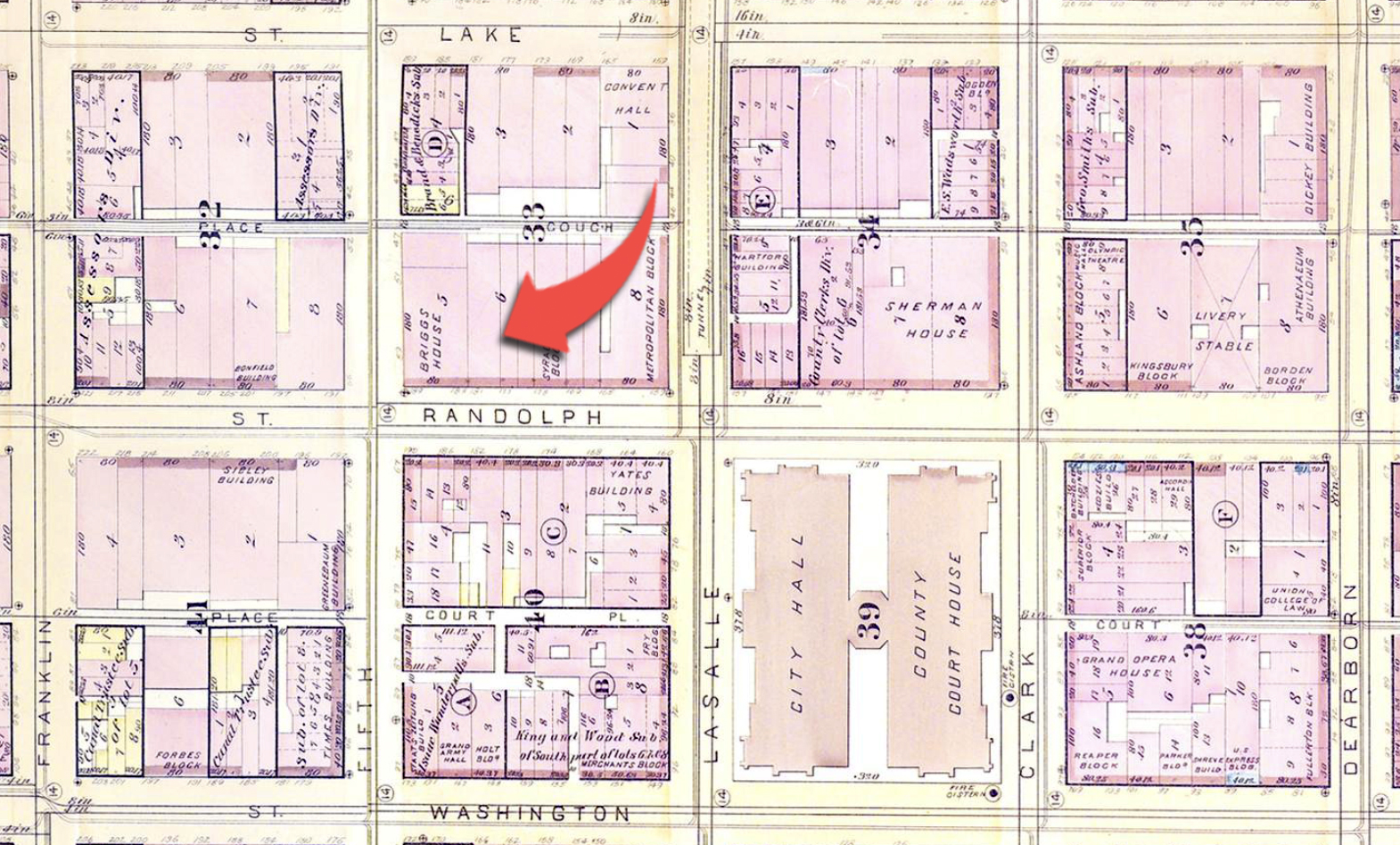