The adjoining Central Manufacturing Block was located on the northwest corner of Madison and Market streets and started construction nearly at the same time.

REBUILT CHICAGO—THE CENTRAL UNION BLOCK
In shadowing forth to the charitable world our new Chicago, we take especial pride in presenting illustrations of those buildings that have been erected since the fire, in the dead of winter, with the elements waging continual war against architects, masons, and carpenters. The most prominent of these is the Central Union block, at the northwest corner of Market and Madison streets, opposite the wholesale building of Field, Leiter & Co. 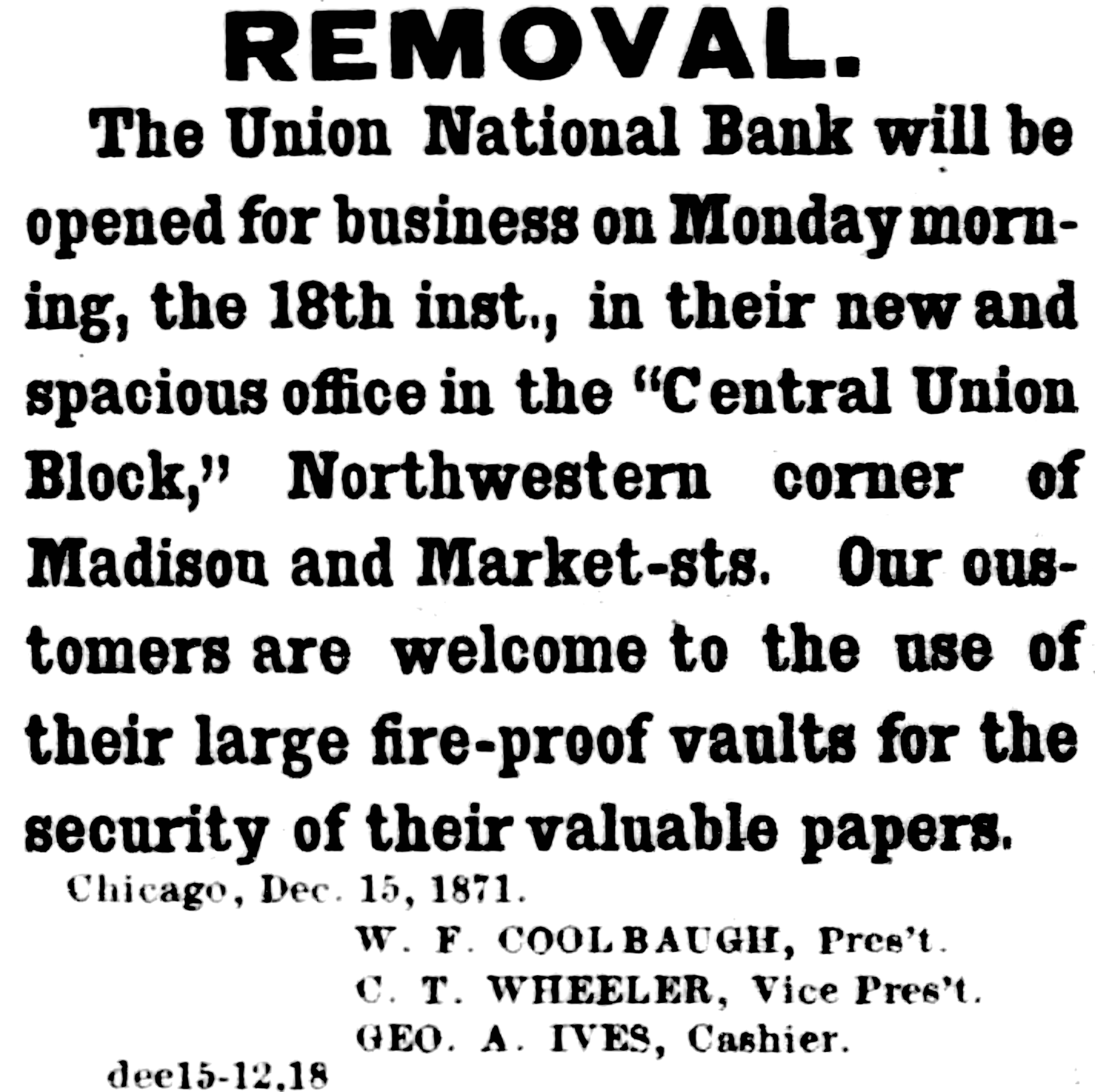 The Owners
In the general ruin of October 9th, the Union National Bank building went down among the other business palaces of the city. Hon. W. F. Coolbaugh immediately determined to erect the Central Union block, and re-establish there his his great monetary institution. In connection with Messrs. Wheeler & Powers, he began to clear away the debris two days after the fire, and in sixty days the building was ready for occupancy.

This immediate action proved a great boon to Chicago, as it provided, at once, seventy complete suites of large and commodious business offices for the accommodation of our business houses. Every office was immediately rented to first-class tenants, and to-day the Central Union block is a busy hive of industry, the annual renting being about $70,000. 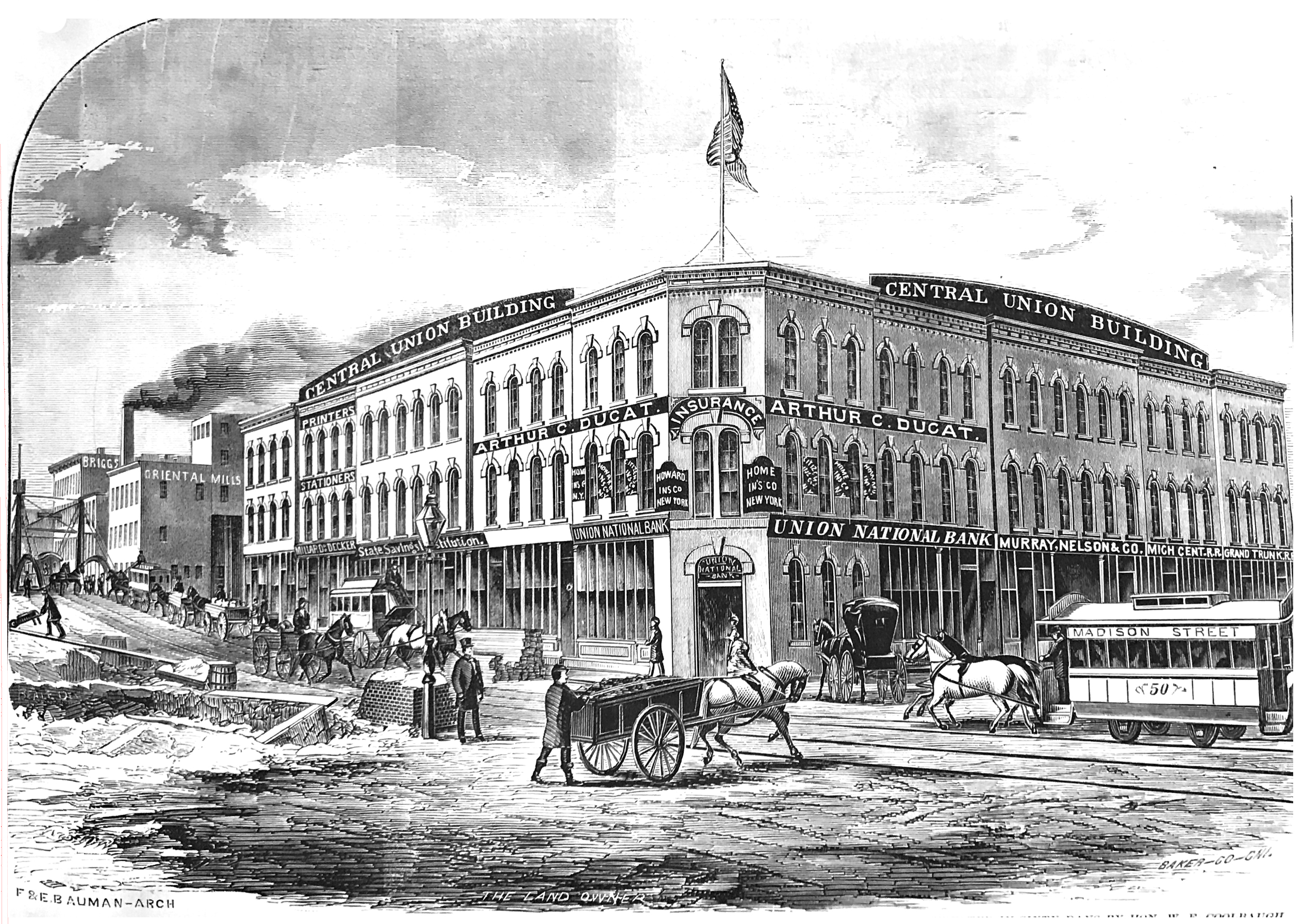 The Building.
The Central Union block is 200 feet on both Madison and Market streets, and 50 feet deep. It is built of brick, with stone trimmings, and considering the length of time occupied in its construction, is a marvelous creation. It will long stand as a fitting monument to its open-handed and bold proprietors. The architects were Messrs. F. & E. Bauman. The building is a much better structure than stood on the site before the fire.

The Union National.
As will be seen in the engraving, the Union National Bank occupies the corner suite of offices on the ground floor. The bank has a larger room than in its old building, fully as commodious and well appointed, being provided with fire-proof vaults, etc. This great institution came through the fire with capital unimpaired, and the statement for the last quarter, published elsewhere, shows how solid and staunch it is today. Mr. Coolbaugh is, undoubtedly, the great financier of the West, and to his efforts, immediately after the great conflagration, is due to the present healthy state of finances in this city. 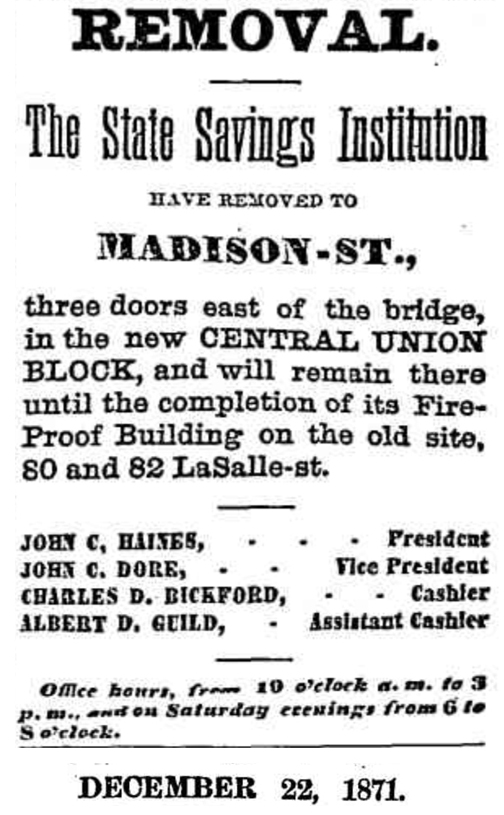 The State Savings Institution.
This old and popular institution occupies a large office in this block, on Madison street, as will be seen in the cut. Its elegant building on LaSalle street is being rapidly rebuilt, and here it stands as a safeguard for our laboring classes until the new structure is ready for occupancy. The State is the strongest of our savings banks, and its action, immediately after the fire, put new confidence in our middle classes, and stimulated them to new endeavors, the salutary effects of which cannot be over-estimated.

Millard & Decker.
This well-known and extensive stationery house occupies the next store, west of the State Savings Institution. Here Messrs. Millard & Decker are better housed than any similar establishment in the city. The entire Madison street front of the block is occupied by banks except their store. This firm has been but a few years known in Chicago, yet they have gradually been coming to the front, and are, today, one of the leading stationary firms of the Northwest. They were the first in their line of trade to start, after the fire, and the first to become permanently located in the burnt district. They have now one of the best appointed and stocked stores in the city. Knowing both members of this firm personally, we predict for them a prosperous future, which their energy well entitles them to. Among their customers they number many of the largest houses in the city, which speaks well for the quality of their work.

General Arthur C. Ducat’s Insurance Agency.
Immediately over the Union National is located General Ducat’s insurance office. It is the finest and most commodious office of the kind in the city. It has been specially fitted up for the wants of his extensive business. He represents the Home, Howard, and Citizen Insurance companies, of New York,—companies which have established their claim to public favor by the payment of over three million dollars to the Chicago sufferers. Gen. Ducat is a well known underwriter, and his very successful management of the affairs of his agency, for the past six or seven years, has resulted in building up for him a business, that is, probably, not surpassed by that of any agency in the city. He has, also, the general agency of the Home Insurance Company, his field extending over four States, and comprising some five hundred different agencies. The office is furnished very
neatly, though not gaudily. 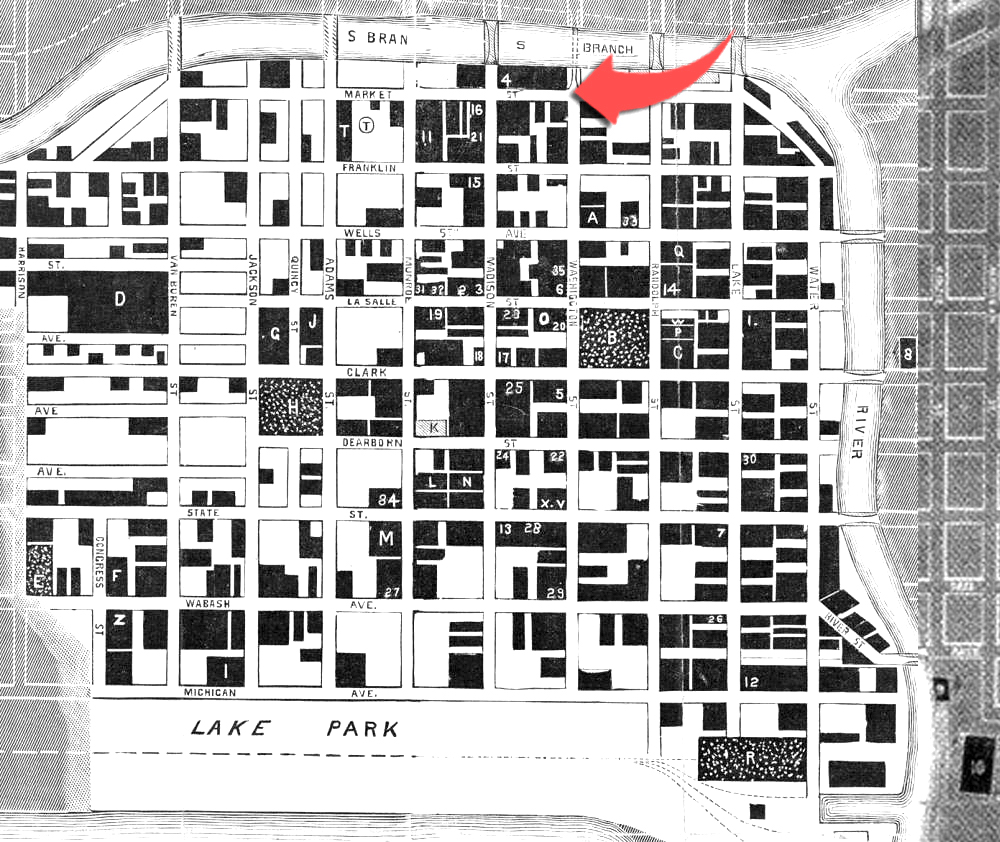 The Chicago Bazaar.
George H. Edbrooke, architect, is now completing the plans for a new bazaar, another instance of the enterprise of this city. It is to be erected by F. A. Wichelman, and is 100×125 feet, located in the rear of the Central Union Block, near Madison street bridge. The interior is arranged with booths on either side, orchestral gallery, and special provision for panoramic views. The first floor of the building will be used for the principal promenade, having commodius galleries above. The first floor of the building will be brick, erected upon substantial piers, leaving the story beneath entirely free to be used as a bathing-establishment. The height if the main story will be 32 feet, with ample means of light and ventilation, there being four main ventilators in the roof, with mezzanine windows on each side. The edifice will be 60 feet in height, to be known as the Chicago Bazaar.

THE UNION NATIONAL BANK
When the fire of 1871 burned the building at the corner of Lake and LaSalle streets, then occupied by the Union National Bank, it was necessary for that institution to find some place in which to re-open its business. C. T. Wheeler, then vice-president of the Union National, tendered the use of a portion of his residence on Wabash Avenue, and for a few months business was transacted there. In the fall of 1871, Messrs. Coolbaugh, Powers and Wheeler erected the Central Union Block on Madison Street, near the river, and the busincss was transferred to it in December of that year. In 1873, they again removed to their present location, handsome quarters in the Union Building, at the southwest corner of Washington and LaSalle streets. 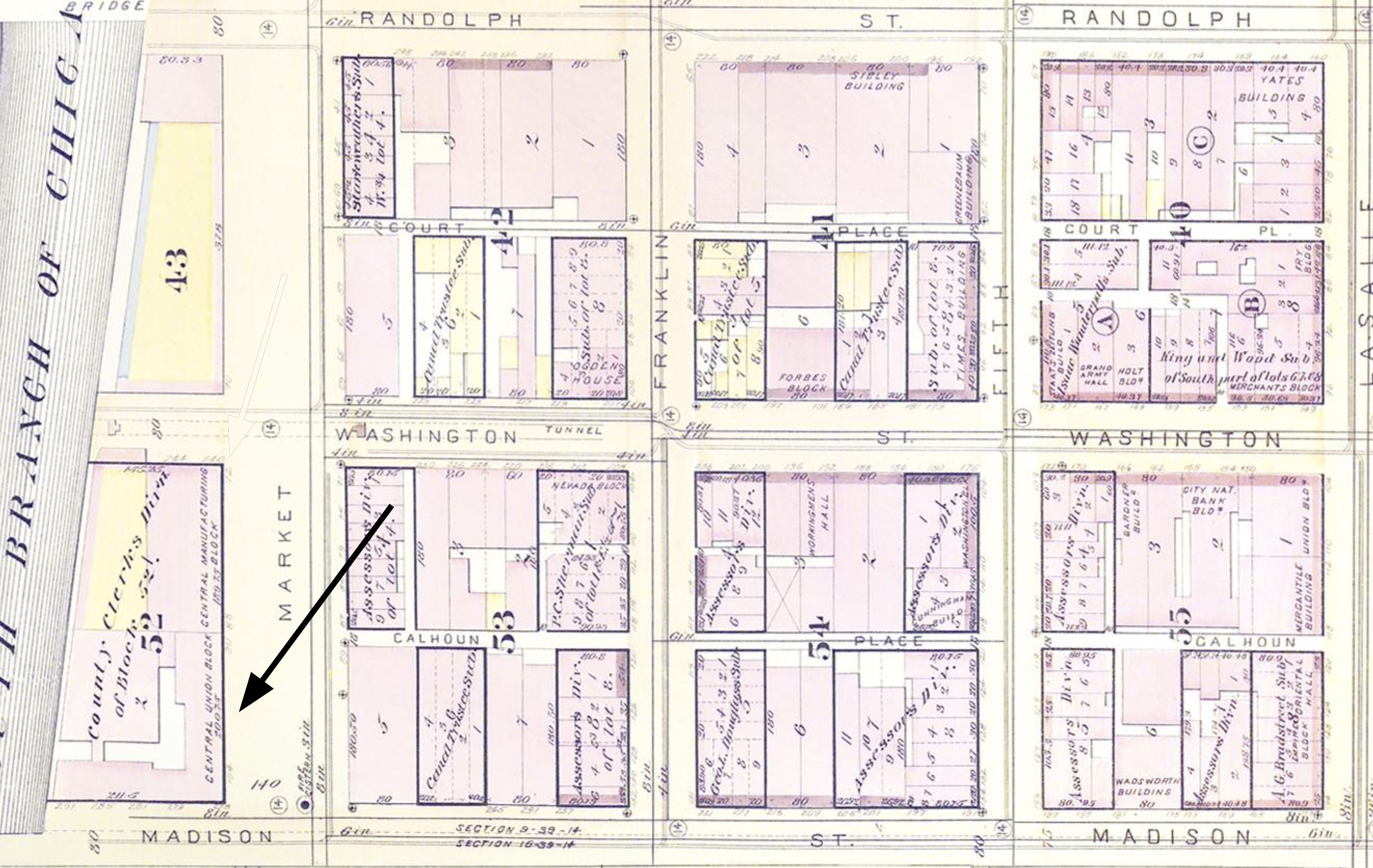 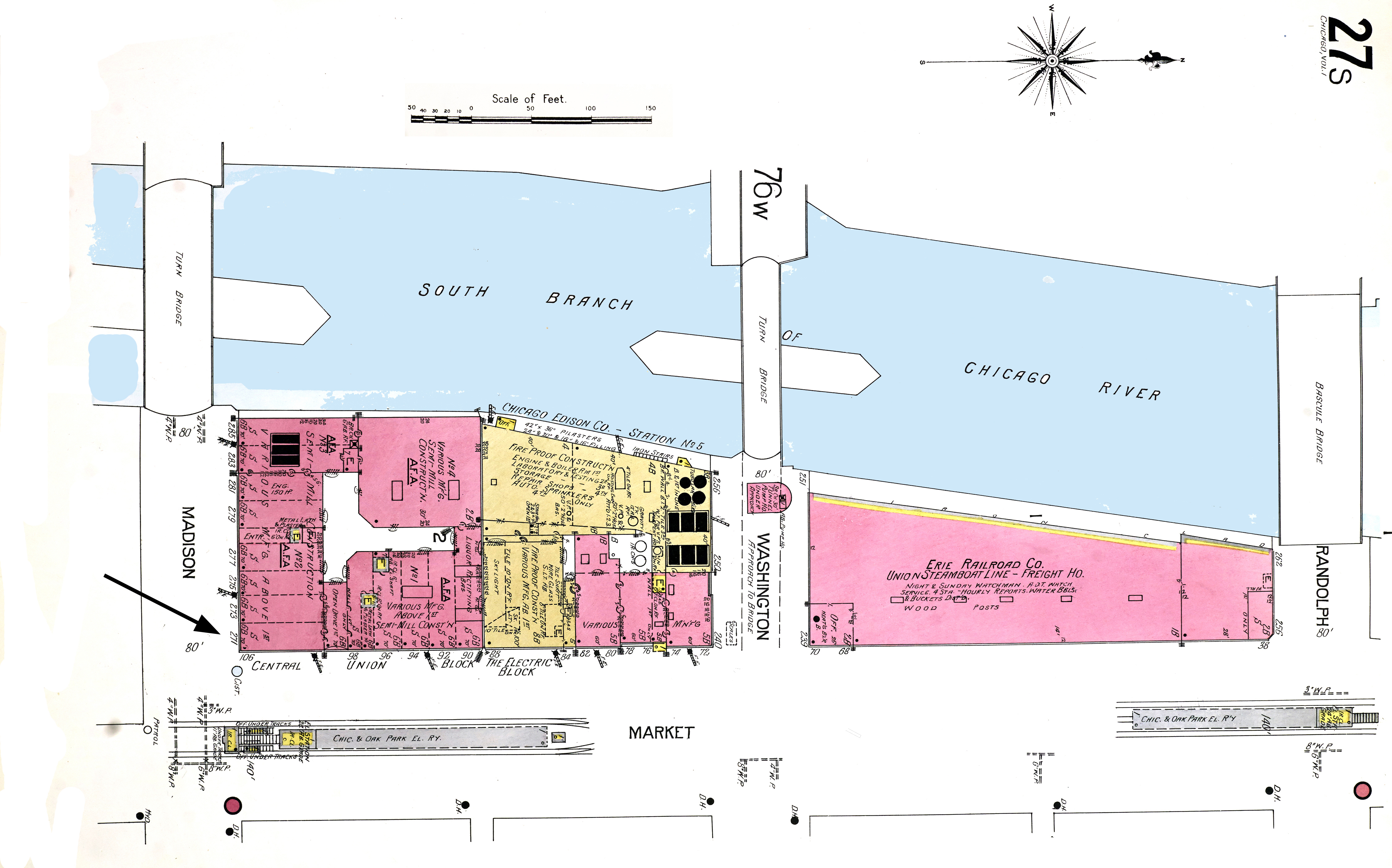 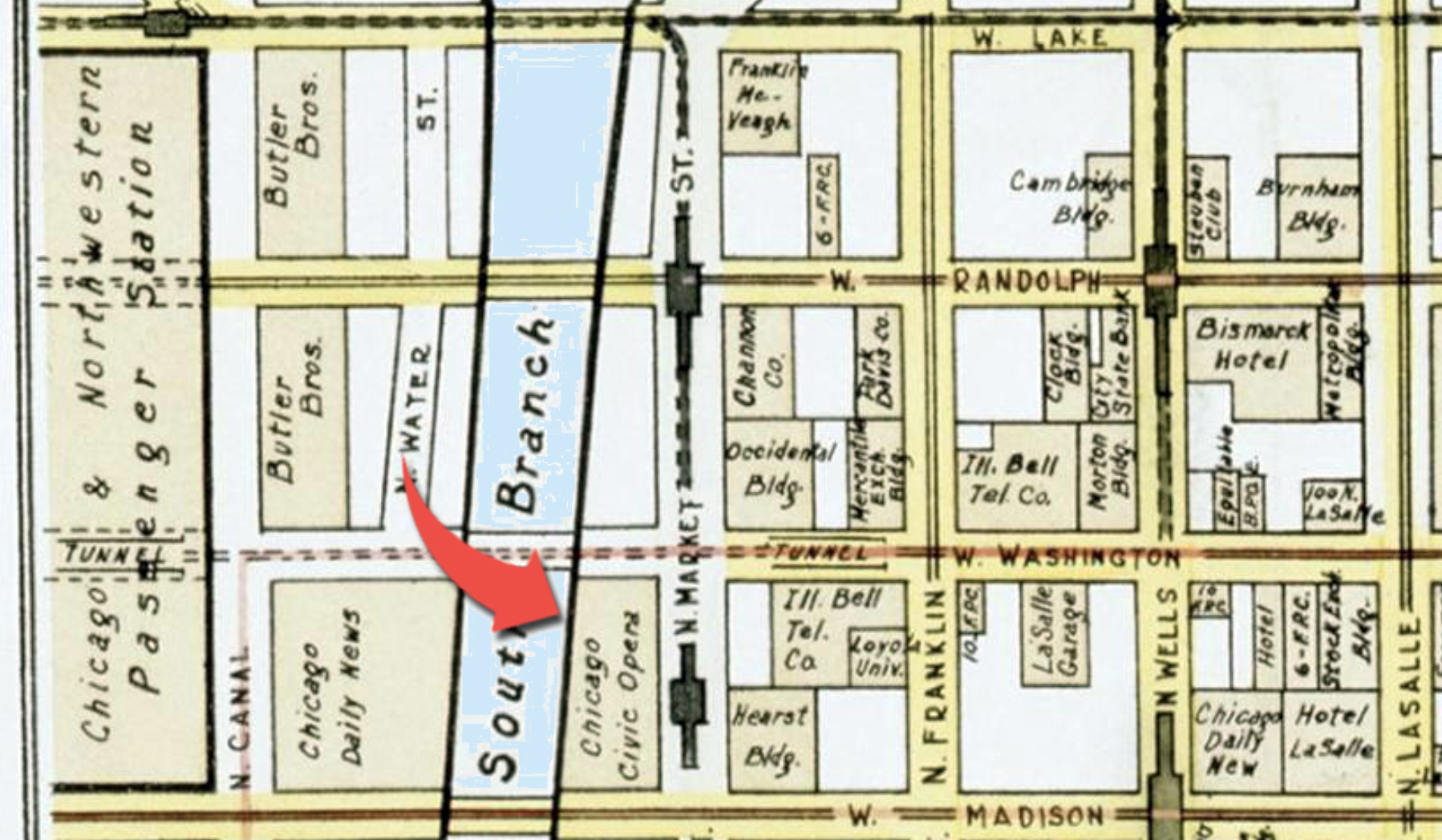 This entire block was purchased by Samuel Insull in November, 1926, as the site for the Civic Opera House.