The first bridge built to cross the river at Madison street was in 1847. It was destroyed by the Great Flood of 1849.

Madison Street Bridge is rapidly advancing to completion. The South and West sides will not long continue to be “lands intersected by a narrow frith.”1

A BAD STATE OF THINGS.—The Lake Street Bridge is slowly undergoing repairs, and may not be ready for teams to cross upon, for weeks. The Van Buren Street Bridge was knocked into the river a few days ago by a passing schooner, and heaven only knows when it will be replaced. The old Madison Street Bridge is no more, while the foundations of the new one is not yet finished, and months may elapse before it will be ready for use. Polk Street Bridge is impassable. This leaves no place for crossing the South Branch between Randolph and polk street. Almost the whole teaming intercourse between the South and West Divisions, is obliged to be done over the Randolph Street Bridge—or left undone.

And to make matters worse, Randolph Street Bridge to La Salle street is an untaversable quagmire, caused by the five or six feet of mud for filling thrown upon it.

If the city officials were doing their duty to the public they would keep large gangs of men at work night and day until at least three bridges North of Polk Street were in passable order.

MADISON STREET BRIDGE.—This bridge was swung on Saturday afternoon for the accommodation of pedestrians, although, as yet, in a rough state. This will be quite a relief to its courteous and gentlemanly tenders, Messrs. Hamilton and Edgel, from their hitherto laborious day of ferrying. Their urbanity will make it a pleasure to cross Madison street bridge.

The third Madison Street Bridge used a riveted, wrought-iron tubular arch, similar to the one illustrated above. The truss was designed and patented (Pat. No. 16,572, Feb. 3, 1857) by Thomas Moseley of Covington, Kentucky. 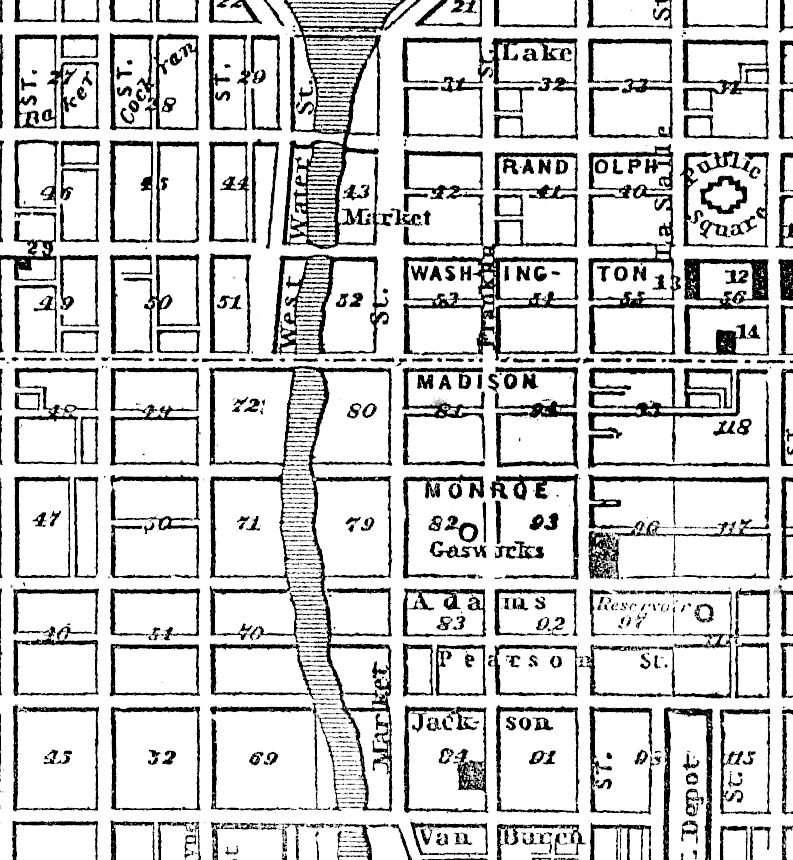 1857 Map of Chicago by Dufus Blanchard showing the bridges of the Chicago River’s South Branch.

Towards the latter part of next month Madison street bridge will be closed to public travel for the space of some thirty days, and in that time the old structure will give way to a new one similar in design to the new bridge at Randolph street. In view of the fact, an obituary of the old and somewhat feeble concern is not at all premature, for its days are already numbered. It was built away back in 1857, when the West Division was all included in but little more than square mile of territory, by Gaylord, of Cincinnati. Together with the stone abutments and substructure, it cost $42,000. About the same time the Rush street bridge was constructed, and these were Chicago’s first experiments in iron bridges. Several years afterwards, Rush street bridge tipped over while a drove of cattle were passing over it. Madison street bridge proper is 155 feet in length, and may be set down, as costing about $30,000. During the eighteen years it has been in service it has cost about $4,000 for repairs, the largest amount put upon it at any one time being just after the fire of 1871,when it received the benefit of some $800, not including the replanking. The immense amount of travel that has passed over it has proven it to be one of the best bridges ever built, and certainly one of the cheapest. Today the abutments and substructure are almost as good as new, and for the bed of the new bridge, will require but a single layer of stone in place of the worn, chipped layer now at the top. This work will require but three or four days at the longest. The new bridge is built by the American Bridge Company upon designs furnished by S. G. Artingstall of the Board of Public Works. It will be similar to the one now at Randolph street, and also the one soon to be built at Harrison street. By the provisions of their contract, the contractors are required to have the bridge completed by Sept. 1, and within thirty days from the day on which they first commence tearing down the old one.

It is confidently expected that Madison street bridge will be swung open to public travel this evening. McBean Bros. will finish paving about the same time, so there is every probability that the cars will travel their old routes after Sunday morning. The new structure was designed by S. G. Artingstall, of the Board of Public Works, and was constructed by the American Bridge Company of this city. The contract was awarded on May 31, and the contractors began to take down the old bridge on the 3d of August. The bridge is 158¾ feet in length by 33 feet wide and is 4½ feet longer than the old one and 3 feet wider. It contains 12,000 pounds of cast iron, 124,416 pounds of wrought iron, and 38,000 feet of lumber. The cost was $11,495.

Construction on the Washington street bridge superstructure and viaduct approaches commenced Sept. 1 last, and the entire structure is of a handsome and shapely character. It is mainly intended for light vehicle traffic, the purpose being that heavy traffic and teaming shall be accommodated on Madison and the other streets. 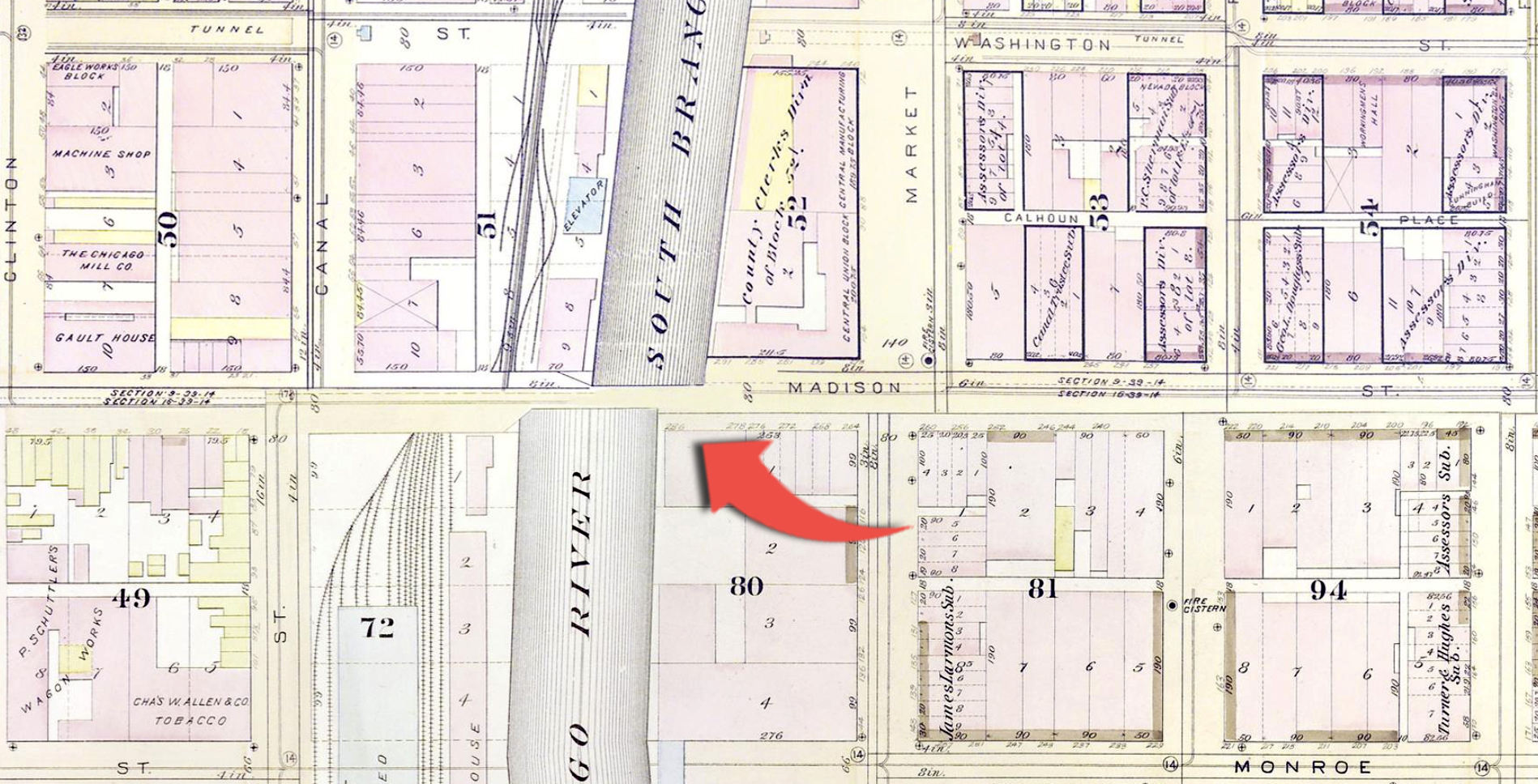 Pedestrians Can Cross the Bridge

The Madison Street Bridge will be finished tomorrow according to the statement of W. A. Leonard, the contractor. “My work will be completed Saturday,” he said, “but the contractor who is building the east approach is not through, so that it will be some days before the teams can cross. Foot passengers have been crossing all day and can do so from this time on. The bridge will cost the city $85,000, and it is the only rim-bearing bridge in Chicago. In case the engine fails one man can turn it easily. It weighs 1,600,000 pounds.” Gen. Fitz-Simmons, who has the contract for building the east approach, said the work will be finished in ten days if the weather was favorable.

The Madison Street bridge was opened for traffic at precisely 8:25 o’clock yesterday morning by City Engineer Clarke’s watch. and from that moment until dark, wagons, carriages, and pedestrians streamed back and forth across the structure in unending processions in celebration of its completion.

The happy event wouldn’t have taken place for a week or two if City Engineer Clarke had not, on the authority of Commissioner Aldermen, taken possession of the bridge Friday and finished the work. 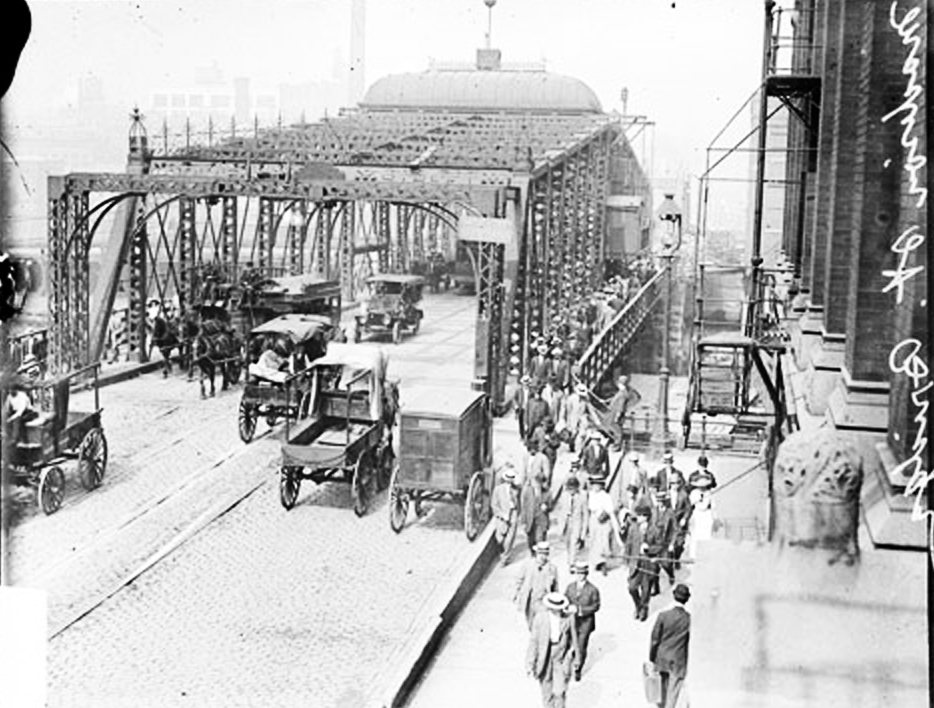 “It was practically,” he said, “taking forcible possession of the bridge. The foremen did not object, however, and no force was necessary. The only thing to be done was to adjust the bearings of the rollers so that the springs would turn all right, but the contractors’ workmen tooled away two weeks at it and were likely to waste two weeks longer.”

It is possible that the contractors will have to pay for their delay. The contract provided for a penalty of $50 a day for every day after Feb. 1, 1890, that the bridge was not completed, but the contractors could not begin work work at the time specified by the contract because the West Chicago Street Railway Company had not completed the repairs to the Washington street tunnel so that the old bridge could be moved. Whether, because of the city’s failure to turn over the street at the time specified, the contractors could take all the time they seemed willing suffering a penalty is a question City Engineer Clarke and Counsel Miller will get together to discuss at the earliest opportunity. 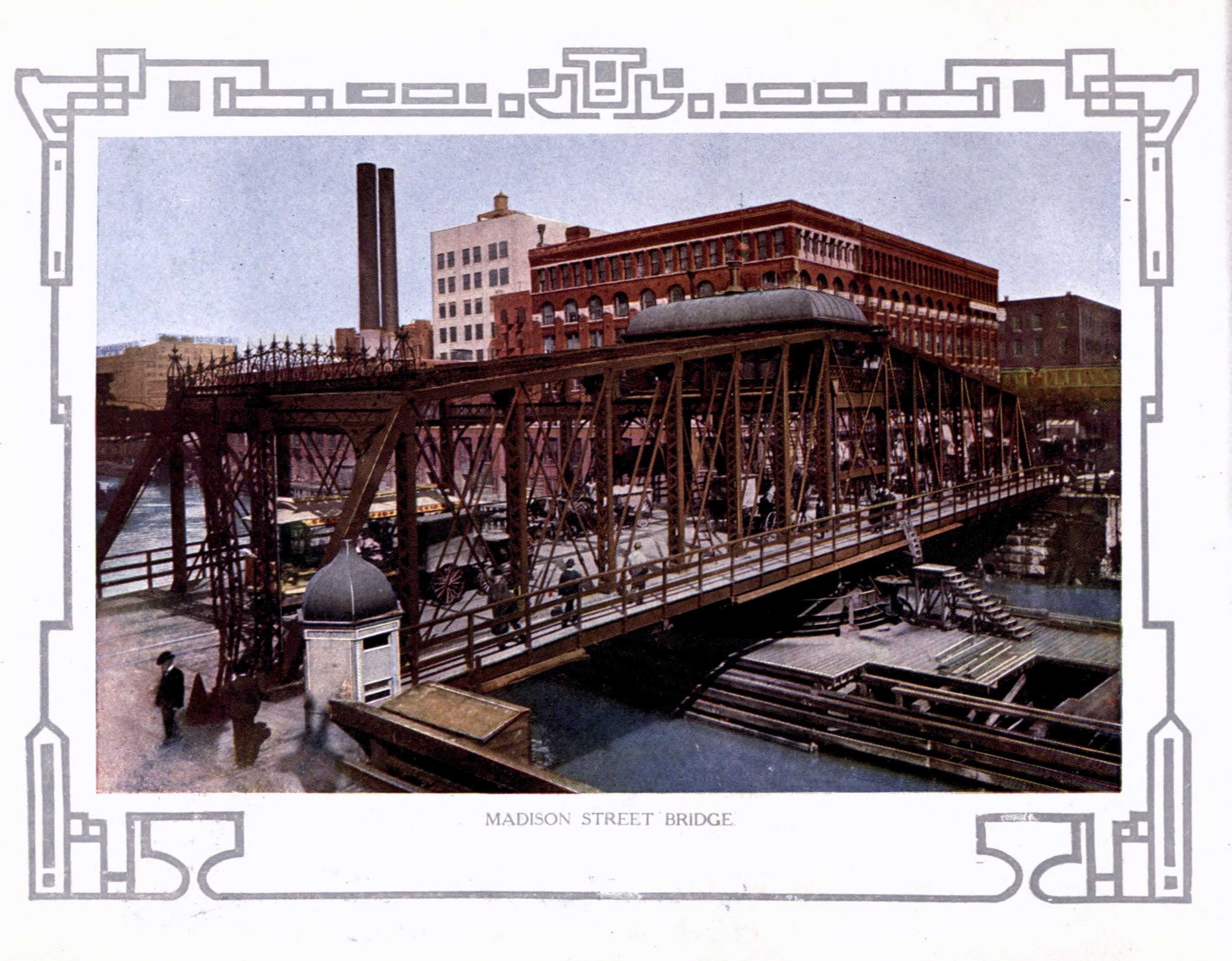 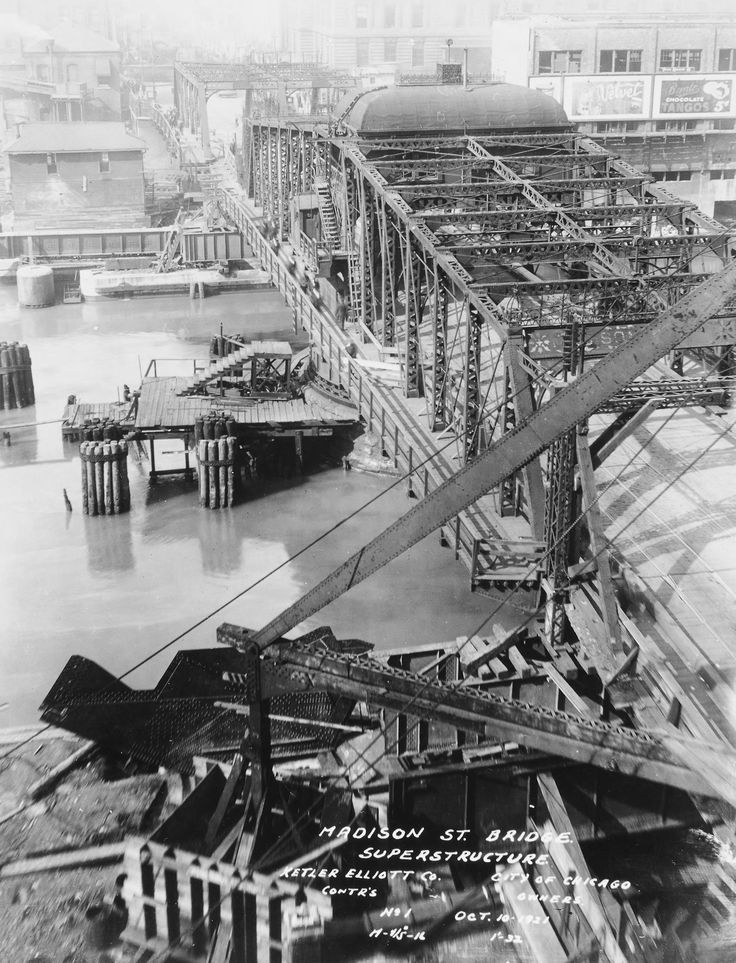 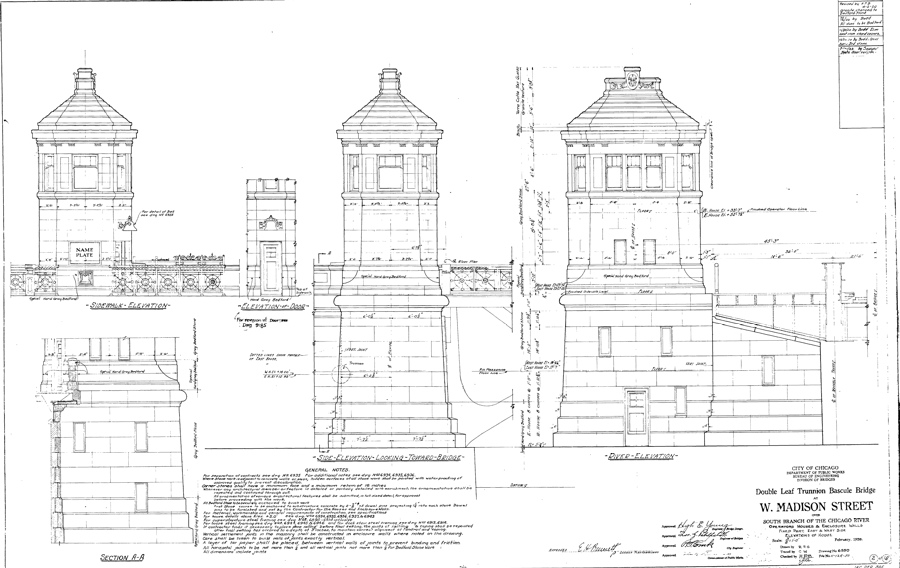 The Madison street bridge continues as a heroic monument of the agony of incompetence, the triumph of demos, shapeless, useless, and reaching steel arms into the heavens as if it were going down a third time and forever in the current of the river. It is a mass of twisted, distorted, and convulsed, inchoate, but with a glimpse of some design thwarted before it could take form. Great as the waste of money is, it is not so great a waste as that of these disordered thoroughfares. The citizen may be as mad as he cares to be, but he needs the bridges and if he has to pay twice for them let him know in such fashion his affairs are run. 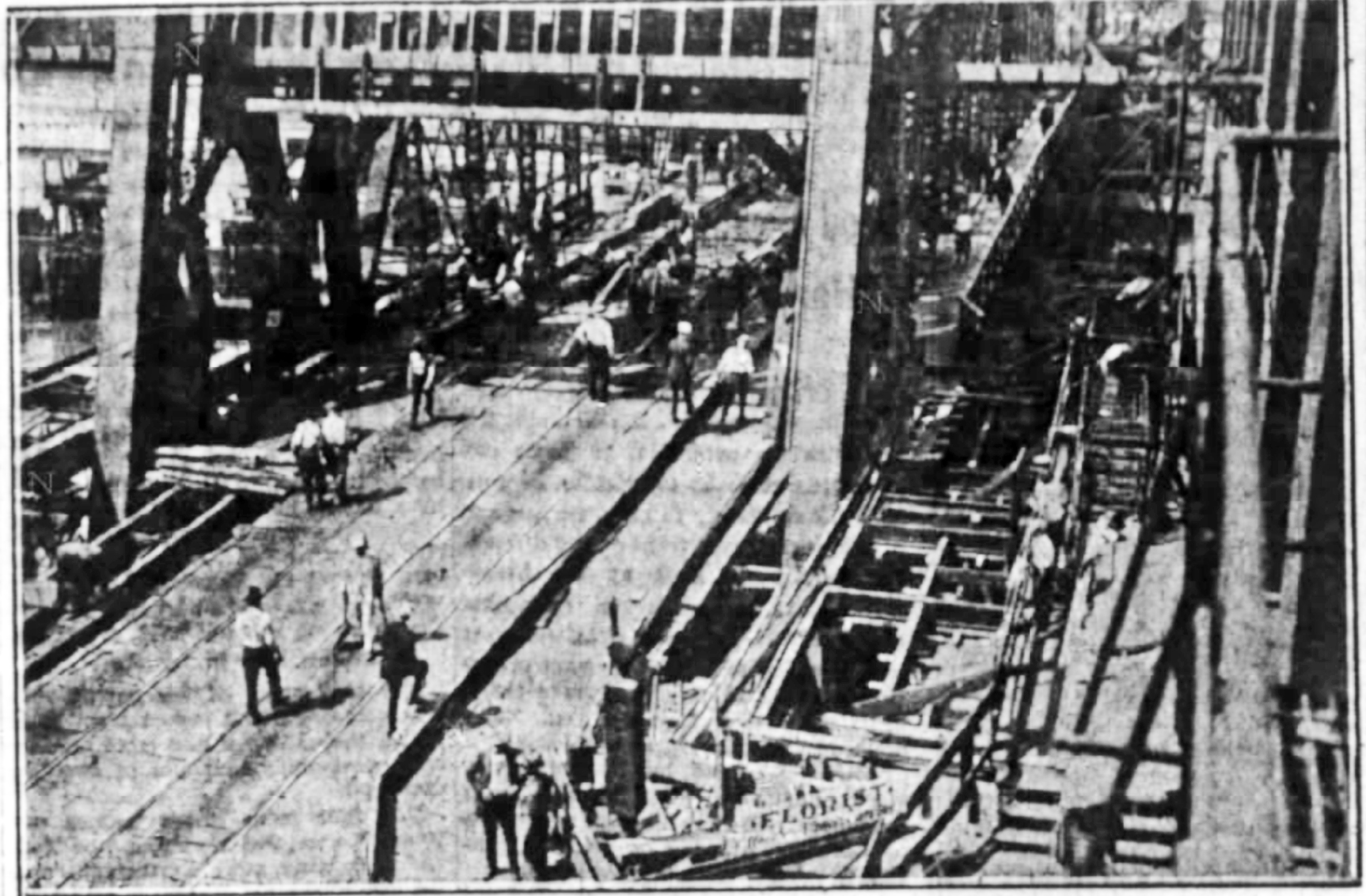 Final efforts by the city to complete the new Madison Street bridge are now under way. The bridge, a double leaf trunnion bascule structure, has been in process of completion since 1920. Unless there are more delays the new bridge will be ready for use from sixty to ninety days. The photo shows the old bridge, which is to be cut to pieces and floated away on barges. Traffic was closed on the bridge yesterday. 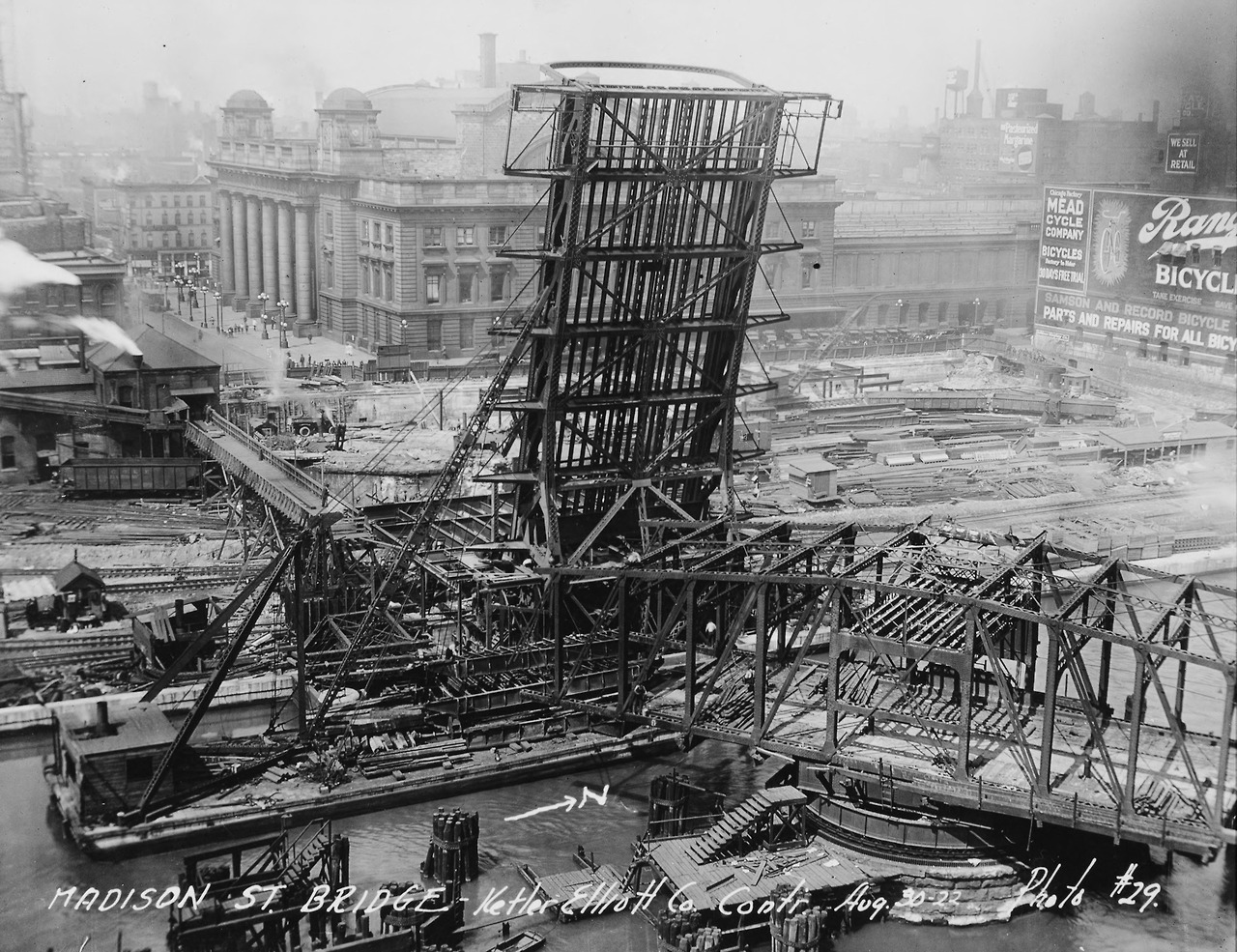 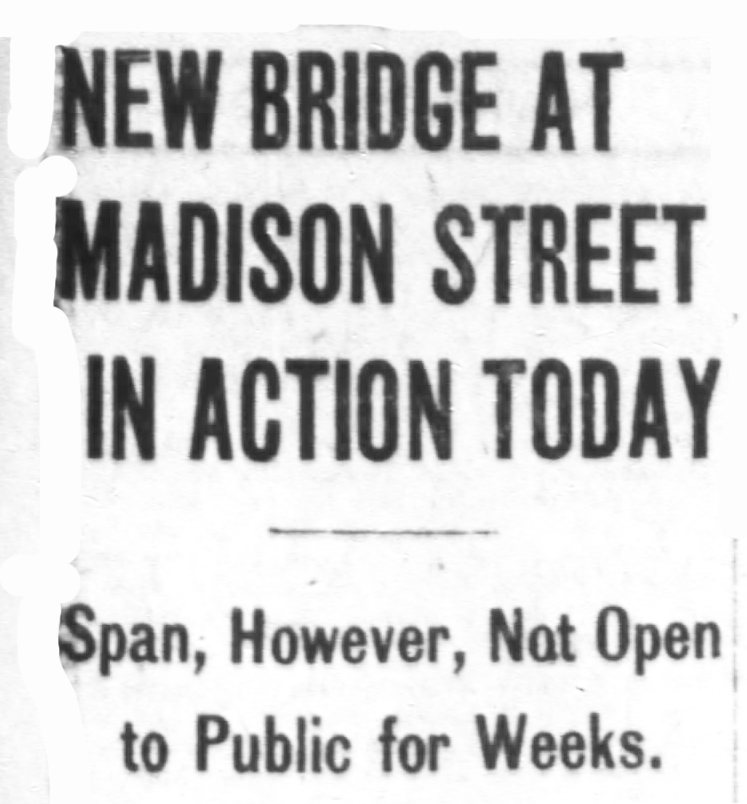 After two years and ten months of intermittent construction work, liberally interspersed with long periods of delay, the new $1,600,000 Madison street bridge will span the Chicago river for the first time at 2 o’clock this afternoon.

The new structure will leave the Clark street bridge as the only center pier bridge remaining in the loop district and, as its predecessor has done for thirty years, will carry the heaviest traffic load of any single deck bridge in the city.

Not Open to Public.
After preliminary maneuvers to work the machinery and test its balance, the bridge which has been built “up in the air” will be lowered today. The public, including the thousands who enter the loop on foot from the Northwestern depot, however, must stand another delay before the new structure may be utilized.

Construction of the new western approach from the bridge to Canal street; the building of new retaining walls for the western approach; the raising of the grades of both approaches, construction of sidewalks, paving, laying of street car rails, and other work will take about six weeks, but pedestrians will be given the use of the bridge sooner, probably within three weeks, according to City Engineer Murdoch. 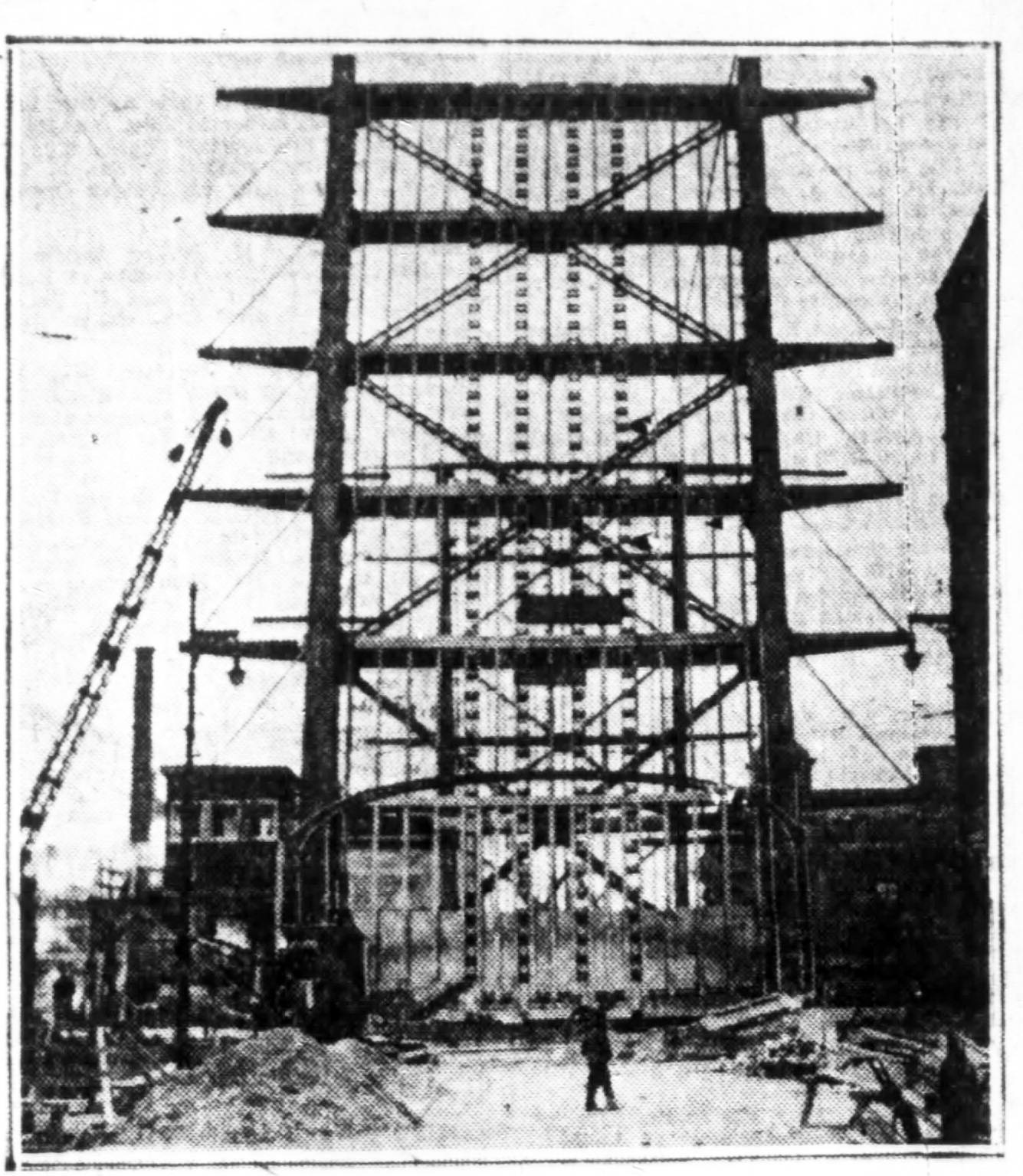 Plenty of Elbow Room.
One feature of the bridge which will be pleasing to the loop worker hurrying to catch the 5:15 is the fact that there will be plenty of elbow room for pedestrians. The sidewalks will be 13 feet 6 inches wide, as compared with 5 feet 6 inches, the width of the walks on the old bridge.

Work on substructure of the bridge began Dec. 1, 1919. That was completed by FitzSimons & O’Connell in December of 1920. The contract for the superstructure was let to the Ketler-Elliott company for $744,000 on Jan. 31, 1921. Then followed a long delay in actual construction work while steel was being fabricated, and it was Sept. 20, 1921 before work was begun.

Bond Issue Exhausted.
In March of this year the bridge bond issue fund became exhausted. Work was ordered stopped by the city council. In June the workers authorized a new bond issue and work was resumed Aug. 1. On Aug. 14 the bridge was closed to traffic to permit removal of the old bridge and work on the approaches to begin.

According to City Engineer Pihlfeldt, the new bridge contains 1,800 tons of steel and the machinery to move it weighs 250 tons. There are 4,000 cubic yards of concrete in the substructure. 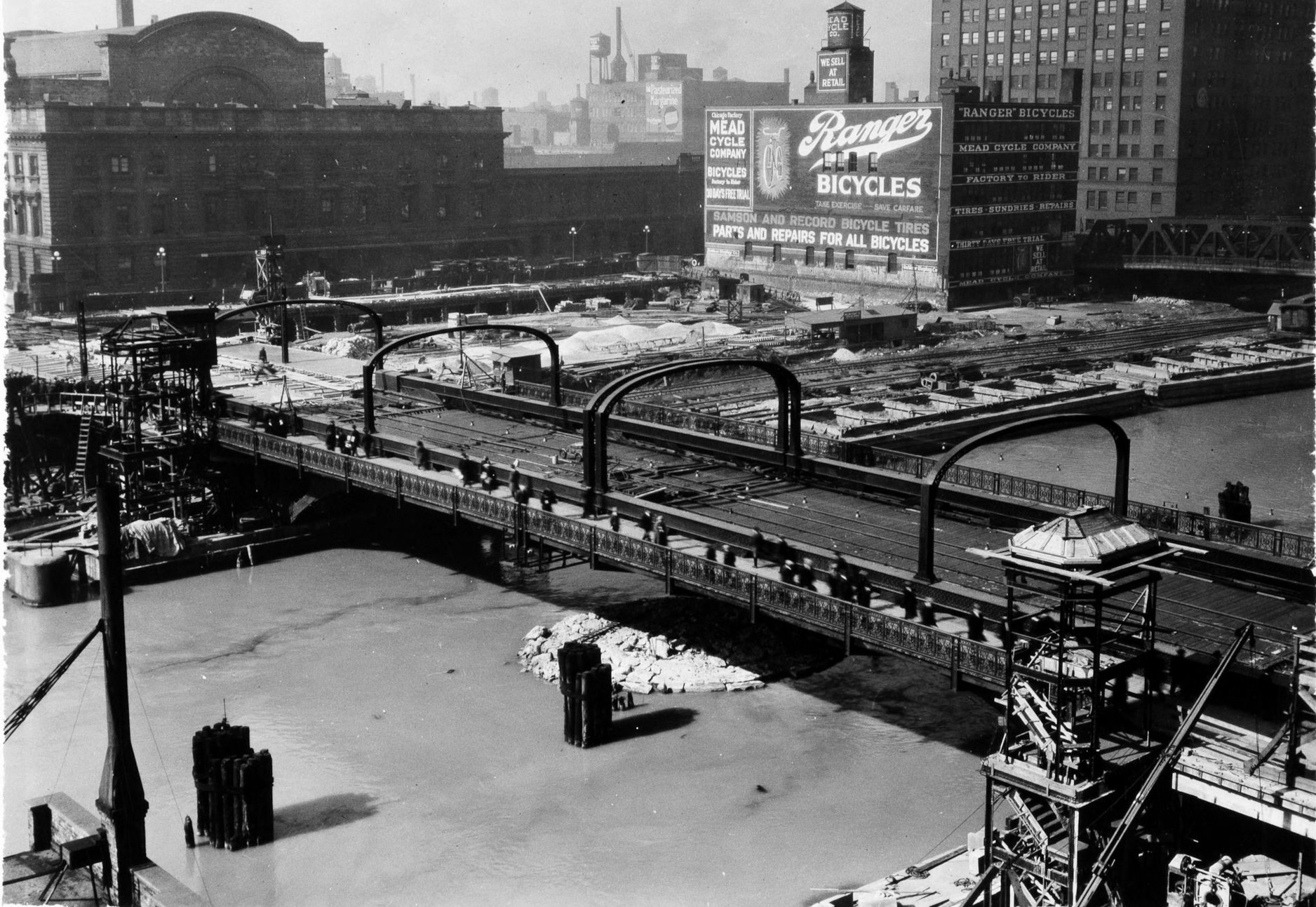 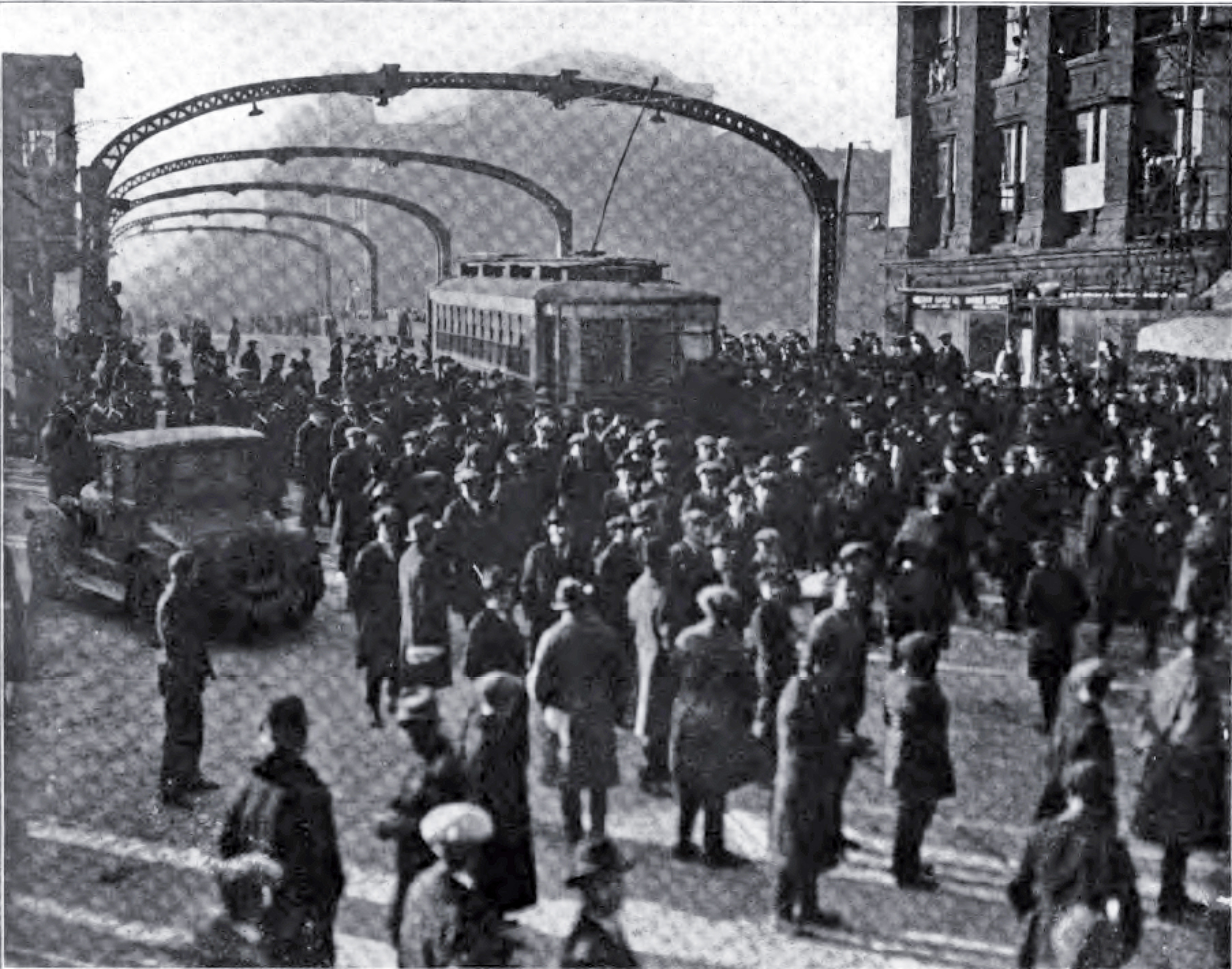 Work begun on Aug. 17 was completed yesterday and the new trunnion bascule bridge thrown open to pedestrians and street car traffic. The total cost of the bridge and east approach is $1,600,000. The bridge has a roadway thirty-eight feet wide. 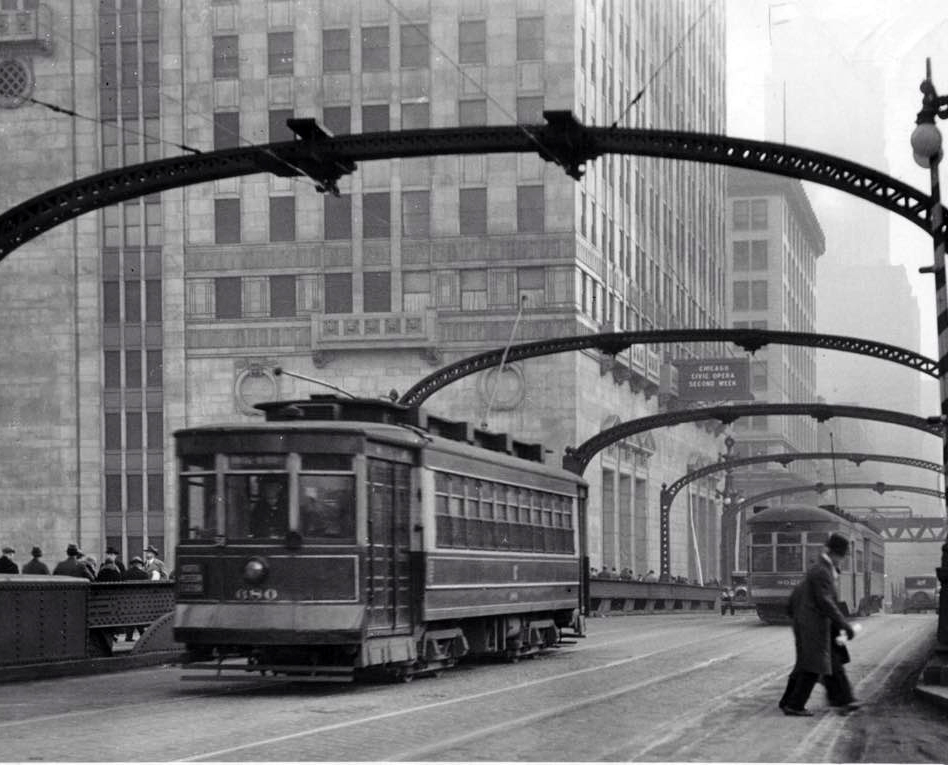 The Civic Opera House From the Madison Street Bridge
About 1930

1 A frith is an archaic word for “estuary,” which is a water passage where the tide meets a river current.