Before this building was expanded by Adler & Sullivan in 1890 by adding two additional stories and a tower, it was a four story building designed for the Chicago Savings Institution and Trust Co. It housed the Inter Ocean newspaper for several years.

OUR MONETARY INSTITUTIONS—NEW BUILDING OF THE CHICAGO SAVINGS INSTITUTION AND TRUST COMPANY.
One of the most marked signs of the times since the great Chicago fire, has been the stability which our monetary corporations have maintained. This will apply especially to the Savings Banks, which are managed with a conservative regard for the interests of depositors, and with an eye to their future growth, instead of a greedy desire to profit in the present. The large force of workmen who found who found employment here all last season in rebuilding the city, generally became depositors in savings banks, and the result was a large increase of deposits over former years. So carefully have these institutions been managed, that the utmost confidence in their integrity is felt by the working class.

Among the first, perhaps the very first, to resume business after the fire was the Chicago Savings Institute and Trust Company. Its office was located in the basement of the First National Bank, and while the upper portion of this structure was badly damaged by the flames, the furniture in the basement was scarcely injured, and maps hung on the walls after the fire unscorched. The officers of the Chicago Savings Institution well knew that the depositors would need money on October 10th, at 10 o’clock, the vaults and safes were opened, and the immediate wants of several were relieved.

As soon as possible an office was opened on the West Side, where the business of the bank was transacted until the Boone block, on Lasalle street, was finished, when the basement of that building was rented, and where the bank found very convenient quarters. Being in the very heart of of the rebuilding, workmen who had not dealt with it soon made its acquaintance through their fellow laborers, and the careful management of the officers and directors.

So prosperous had the institution become by midsummer, that was decided to erect a building for its permanent home. The lot at the northwest corner of Madison and Dearborn streets was secured, one of the most valuable corner pieces of property in the whole city, if not, as judged by some, the most valuable. Our readers will remember this as the site of Booth’s oyster house, before the fire. It is directly opposite The Chicago Tribune building, just across the street from the magnificent Hawley block, and on the other corner of Dearborn street is the Merchant’s Savings, Loan and Trust Co. 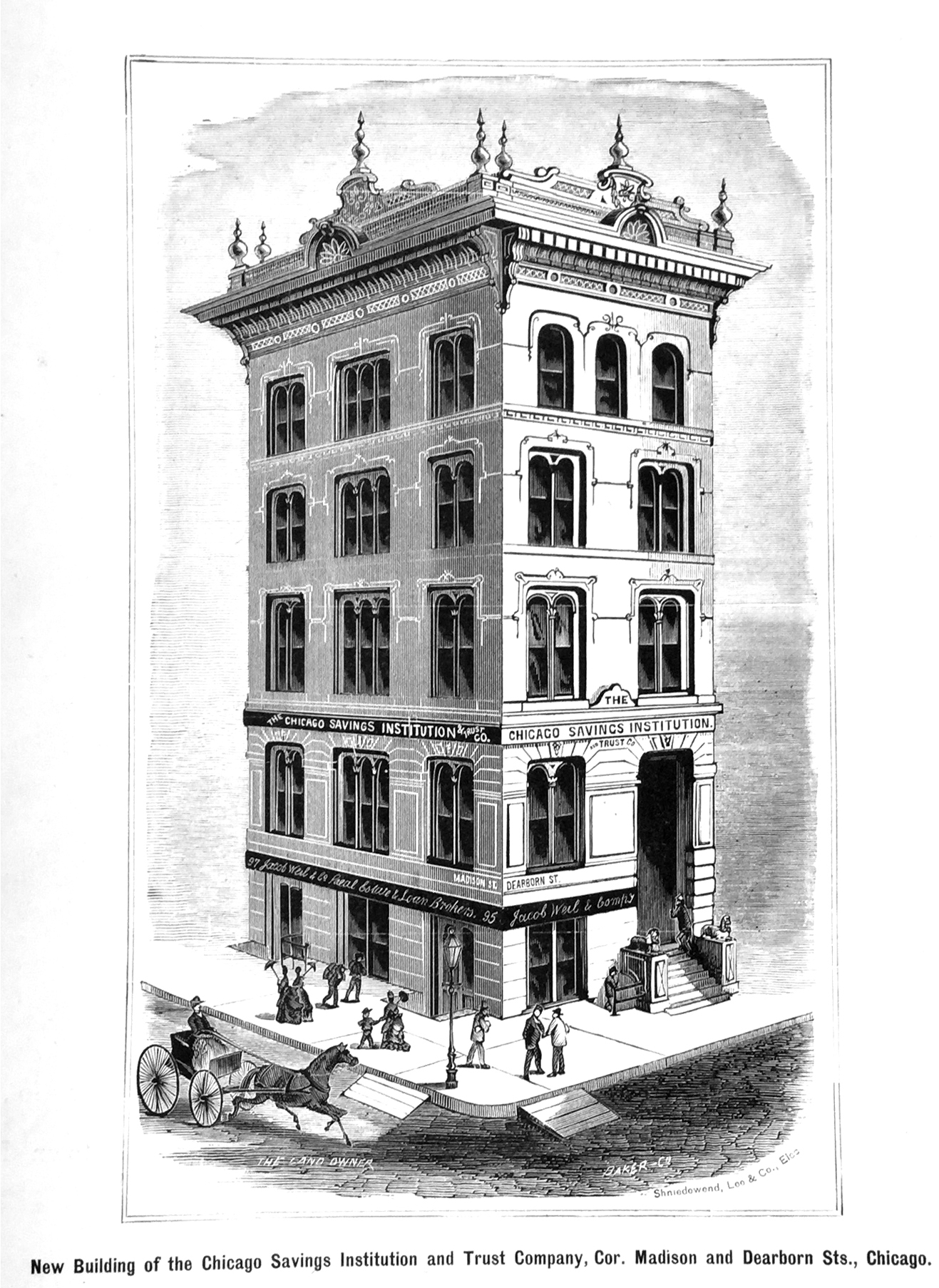 This lot secured—and it was no small task, as hundreds had an eye upon it—for the building began, and were pushed with energy. The result is the beautiful marble building shown in our accompanying illustration. It stands boldly guarding the corner of these beautiful thoroughfares, wit its Egyptian sphinx crouched at the entrance of the bank, and its symmetry of proportion and beautiful architecture attracting the attention of everybody on the streets. In the long lines of buildings on Madison and Dearborn streets, this seems to fit as a keystone, uniting the whole, and towering above them, as if to assert its superiority of location.

This building is one of the most thoroughly built of any in the burnt district. Its vaults are large, and are thoroughly fire and burglar-proof in every respect. Its construction was watched from the foundation stone to the roof by the officers of the bank, and they know that they have an edifice that will stand. Its cost was about $25,000.

Internally this building is elaborately finished in black walnut. The first floor is occupied by the bank, where it has as comfortable and elegant a home as any similar institution in the world can boast. As you enter from Dearborn street, an immense ground glass window attracts the attention, reminding one of industry and the need of economy by its symbolical characters. The bank has just room enough to transact its business, and none to spare. 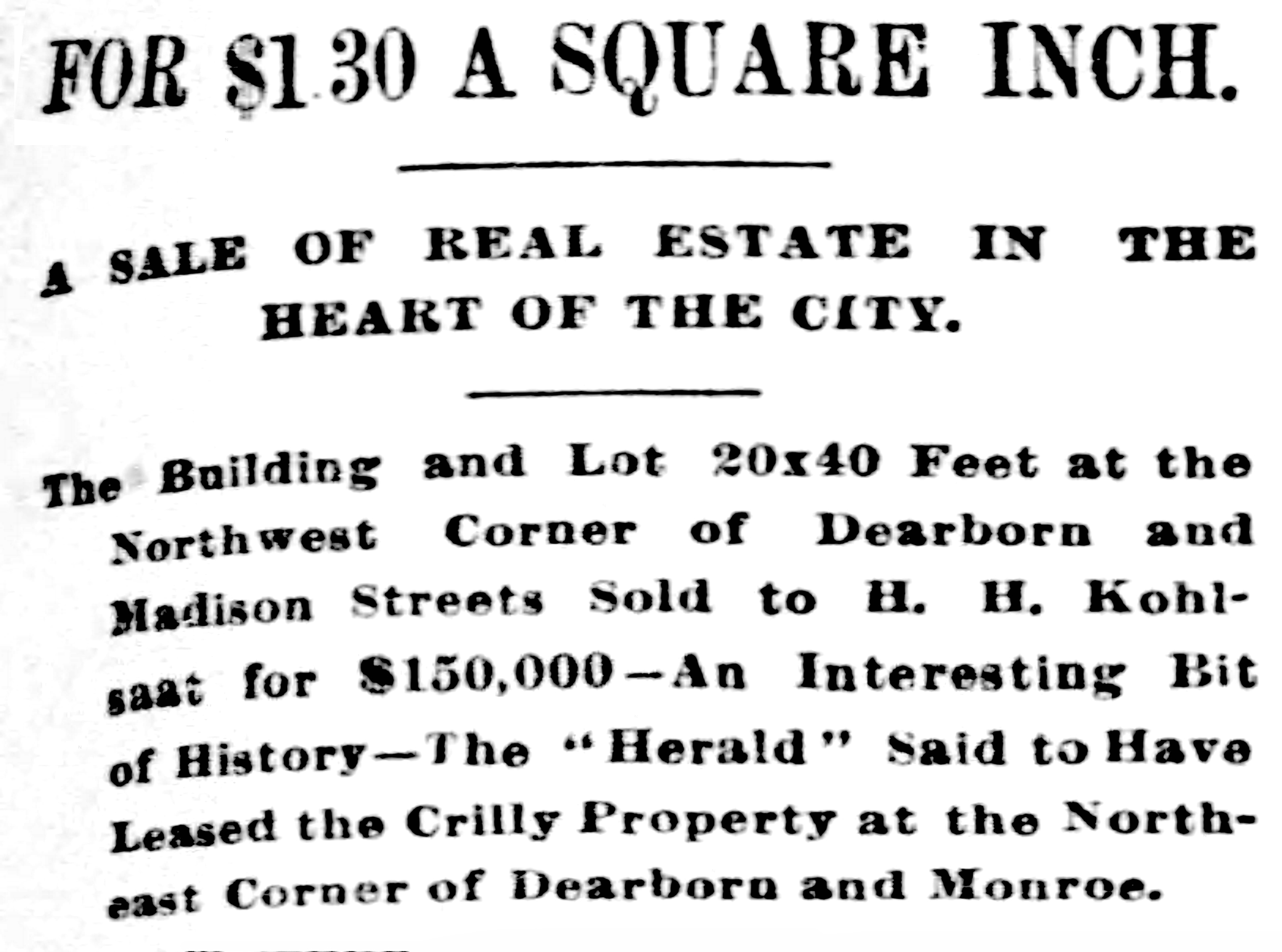 The Tribune this morning, merely for the comfort and assurance of its exchanges, which continue to animadvert upon the cadence of Chicago and perhaps desire evidence, gives prominent position to trifling sale of real estate. It os only a little matter of 30×40 feet of ground. It is a corner lot, and our exchanges can see it at a glance that it is just about the right size for a cozy log cabin, although hardly big enough for a blue-nosed down-eastern’s coal shed. This insignificant bit of ground happens to lie at the corner of two streets on which Chicago desperately pretends still to be doing a little business. The ground is at the northwest corner of Dearborn and Madison streets, its frontage of twenty feet being on Dearborn. A Chicago business-man was foolish enough to bind himself by contract to pay $7,500 per front foot for this shallow lot. That is to say, he agreed to pay $187.50 for every square foot of it, or $1.30 for every square inch. In fact, this citizen of decadent Chicago first carpeted the ground with $20 silver certificates—5,000 of them it took to cover it—and said to the owner, “Give me the ground and take the carpet.” But Norman T. Gassette, who was advising the owner, suggested that another thickness of something or other, even if of less costly material, was absolutely necessary. So the man whose heart was gone on that corner spread a snug and close layer of new $10 greenbacks over the twenties. Then Mr. Gassette rubbed his glasses and whispered confidentially to his client, “That beats any rug in the City of Chicago. You had better tale it.” And he did. What better evidence can anybody want that Chicago has lost its head for business and is fast tumbling into the sere and yellow?

H. H. Kohlsaat is the man who has bought ge little corner. He has put $150,000 into it with an idea that he has made an excellent investment. There now stands upon the ground an old four-story and basement building, of little value because it has no elevator. The thirs and fourth stories are without tenants, yet the building yields even as it is a rental of $11,000 a year. That is over 7 per cent on Mr. Kohlsaat’s investment, If it were not for the fact that Chicago is in the sere and yellow Mr. Kohlsaat could not be convicted of such great folly after all. The fee of the ground is at present held by Tolman Wheeler, yet the real seller to Mr. Kohlsaat is William Y. Daniels, who has held the ground for nearly twenty years under a lease running till 1891. This lease contains a clause giving the lessee the option of purchase for $42,500 upon any semi-annual rent day, take a deed of the ground, and immediately convey the whole property to Mr. Kohlsaat for $150,000. The present building could not have cost Mr. Daniels much over $25,000, so that the whole costs him about $67,500, and he makes a pretty fair profit. Practically, however, as the building has long since more than paid for itself, he sells for $150,000 an option which he gets for $42,500. With the exception of a small lot on Dearborn street south of Harrison, which Kohlsaat turns into the deal, the consideration is to be in cash.

Mr. Kohlsaat has not decided what he will do with the property. He regards it as one of the best four corners in the city, and is confident that it will yield him a large return. He is now considering three propositions:

To let the present building stand, but improve it;
To give a lease to some one who will put up a suitable building upon it;
Or to erect a new building himself.

He has already had offers which assure him a profit, but he believes so thoroughly in Chicago and in this corner’s future earning capacity that he will not be easily tempted to let it go. The first floor now rents for $3,000 a year, the second for $1,200, and for te basement, in which Mr. Daniels has his cigar store, $6,000 has been offered.

The lot has a simple but interesting history. Away back in the ’50s it was part of the Episcopal church, of which Tolman Wheeler was a prominent member. When the church was removed to another site the land was returned to the original donors, according to the sums contributed by each for its purpose. Mr. Wheeler, who had given about $18, was offered an inside lot measuring 40×80 feet, but he declared a preference for the corner and expressed his willingness to take half as muxch ground as was his share on the inside. So he received what seemed a useless little patch of 20×40 feet. For what cost him $18 he has received an annual rental of $2,550 for many years, and he now sells it for $42,500, this price being the valuation of twenty years ago. The buyer turns it over for $150,000 to Mr. Kohlsaat, who has a notion that in a few years, if Chicago only keeps on at its present rate of decadence, the lot will be yielding $25,000 a year. The price paid by Mr. Kohlsaat is the highest per square foot ever paid for any land west of New York City.

The Inter Ocean Building.
Plans have already been drawn for the improvement of the property acquired by The Inter Ocean Building Company. The Haskell Building will be improved, refitted, and converted into a thoroughly modern structure, while the Kohlsaat corner will be denuded of the present structure to give place to a building that will harmonize in design with the adjacent block, to which it will be an addition. The corner will be one of the most attractive in the city, as it is one of the most valuable. It would be premature to give in detail the particulars of the project, as nothing can be decided until the meeting of the incorporators of The Inter Ocean Building Company, which occurs April 16. It may be stated, however, that the new Inter Ocean Building will be the most perfectly arranged, for its purpose, of any newspaper building in the city. The offices to be rented by the public will be entirely separated from the space occupied by the various departments of the newspaper. While, as before stated, details of the project can not yet be given, it is presumed that there will be no unnecessary delay in commencing the improvement, and that they will be hurried to completion. 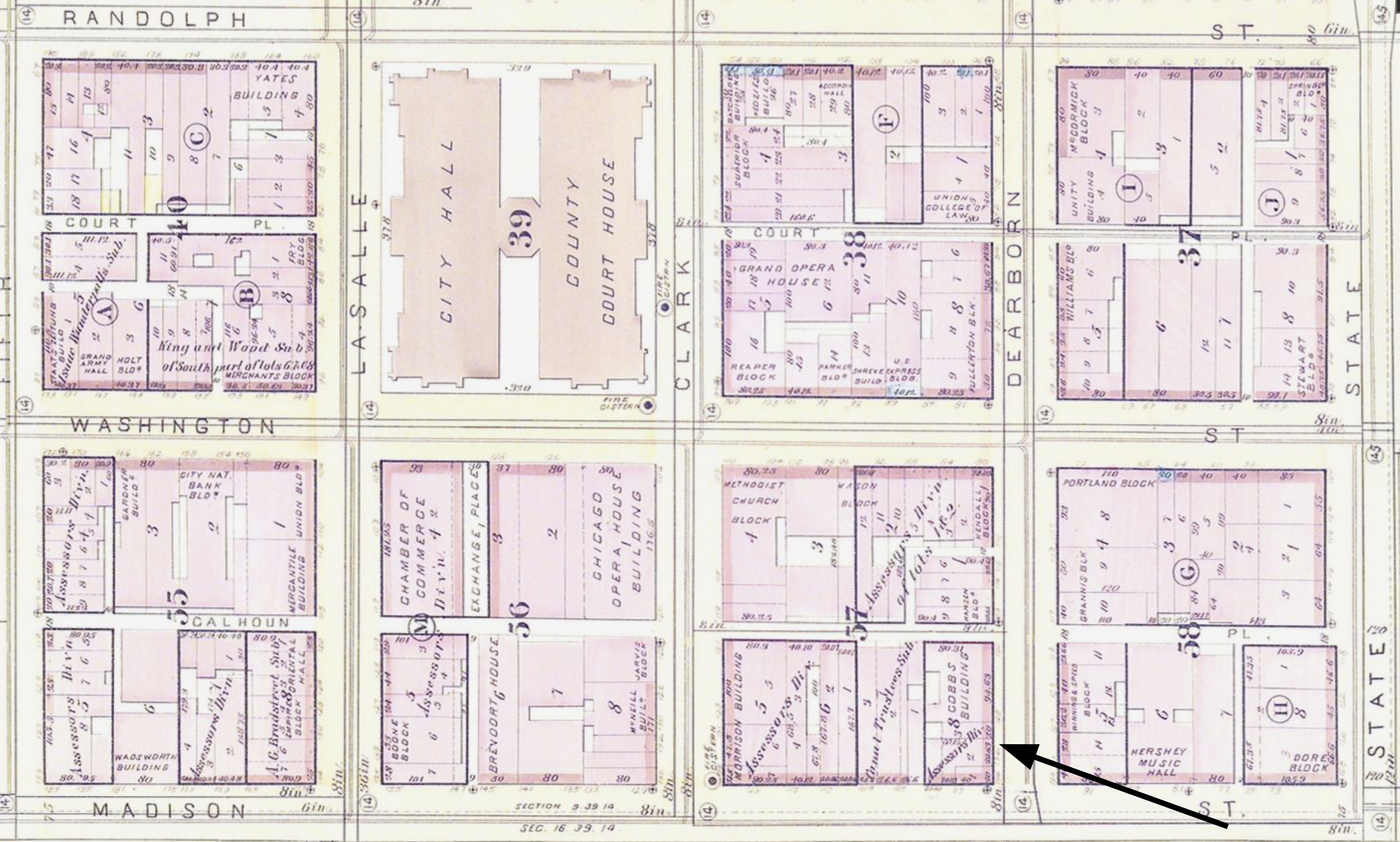 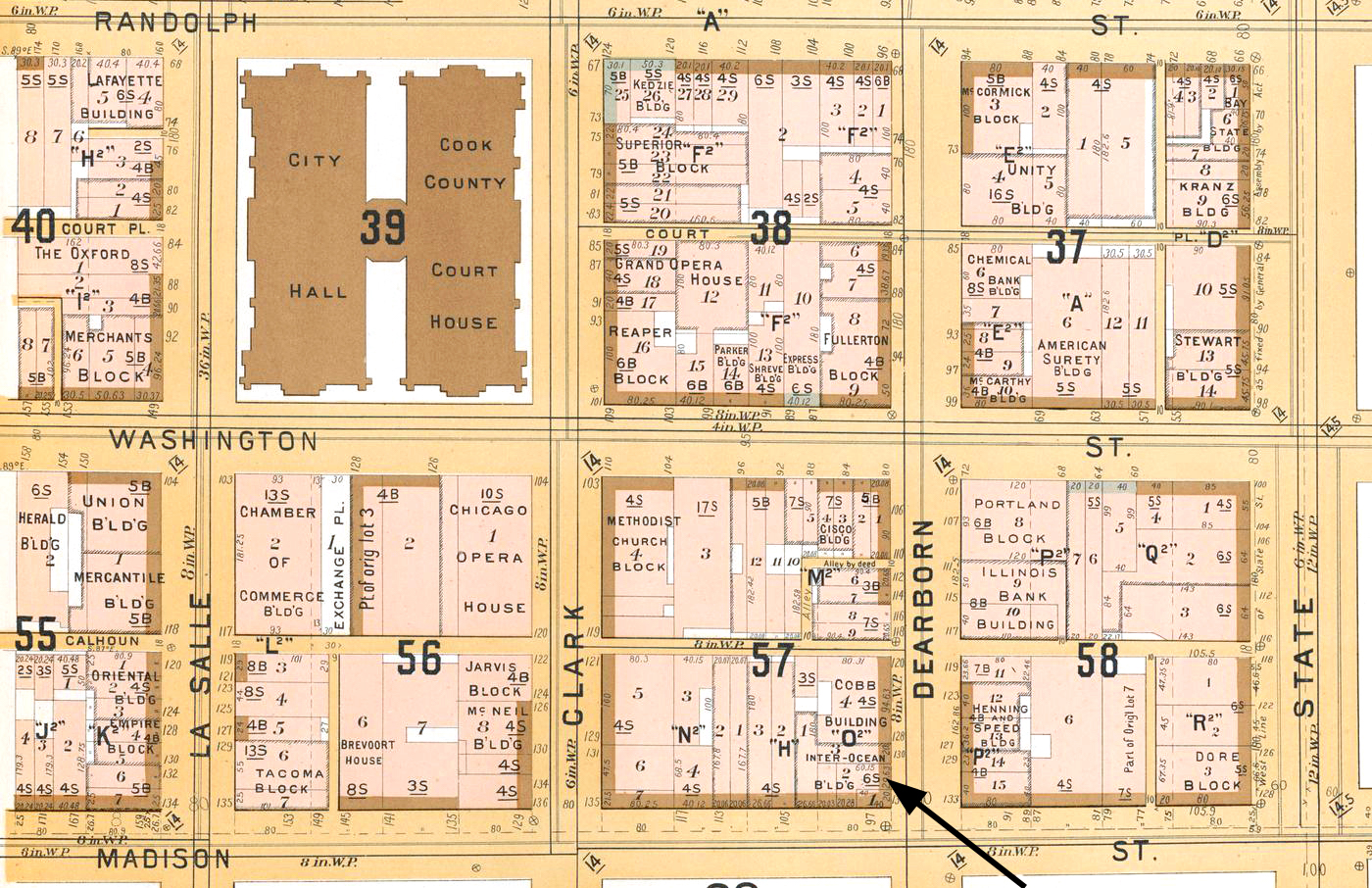