Van Osdel is about to put up for E.S. Hawley, a handsome iron front building, four stories and basement with an iron French, or Mansard roof. It will have a front of 50 feet on Madison, and 92½ feet on Dearborn street, standing where Reynold’s Block was. It will also be devoted to offices and banking purposes, upon the equipment of which no outlay will be spared to make them neat, convenient, and attractive.

THE INTERSECTION OF DEARBORN AND MADISON STREETS will be remarkable for a fine building on each corner, of which more will be written hereafter. On the southwest corner, facing The Tribune Building, on the site of Reynold’s Block, Hawley’s fine iron-front building will be shortly erected. It will have a frontage of 92 feet on Dearborn street and 50 feet on Madison street. It will be four stories and basement, with Mansard roof, which adds a fifth story. The corner will be cut off, as in The Tribune Building, and inside the most prominent feature of the building, great pains having been taken in the design, the beauty of which is exclusively due to the owner, to make it worthy of a high rank amoing the architectural excellencies of the new Chicago—if there should be found any to speak of. The entrance on the corner will be approached by a double flight of iron steps. A balustrade will be placed on the second and third stories with a pediment over the latter. Two chaste female figures will stand on this story, emblematic precisely of what, if not of the former former occupants of Reynolds’ Block, it would be hard to tell. The architect probably knows, but he would not tell thye world. Mr. Van Osdel, in drawing them, has pointed their arms at unmeaning angles and in extraordinary directions, a habit quite unusual withe well-behaved ladies, which probably accounts for the surprising attitude. The corner will be lighted with mullion windows, with a graceful column on either side. The windows on the Madison and Dearborn street fronts will all be of the double style so much in vogue in Chicago, and tells plainly that the architect drew the plans while opposite Bryan’s building on La Salle street, where he had ample opportunity to observe and copy. The grand entrance will be on the corner, of course, a side entrance being provided on both points. The building will be mainly occupied by offices, the lower story being reserved for a bank.

This is one of the most elegant and substantial structures in our new Chicago, built entirely of iron, cast in beautiful architectural designs. It occupies the site of the the old ante-fire Reynolds Block, and was erected by E. S. Hawley, Esq., who has thus given the new city one of its handsomest and most attractive structures. It is fitted throughout with Sargent & Greenleaf’s celebrated locks. The corner of the block is occupied by the National Bank of Commerce, which has one of the finest banking offices in the city.

BALDWIN, WALKER & CO.
This firm, dealers in real estate and negotiators of loans, occupy No. 7 in the Hawley Building. John Baldwin, Jr., senior member of this house, was formerly of Massachusetts, but for nearly twenty years past he has been engaged in business in Chicago, being one our best known citizens. Mr. Robert H. Walker, the junior member, was also from Massachusetts, whence he brought with him much of the stern integrity of his New England training. The present firm was established in 1869, and prior to the great fire were in the Otis Block, corner Madison and LaSalle sts., but now have much better offices in the new Hawley Block, to which our artist does ample justice on our title page. 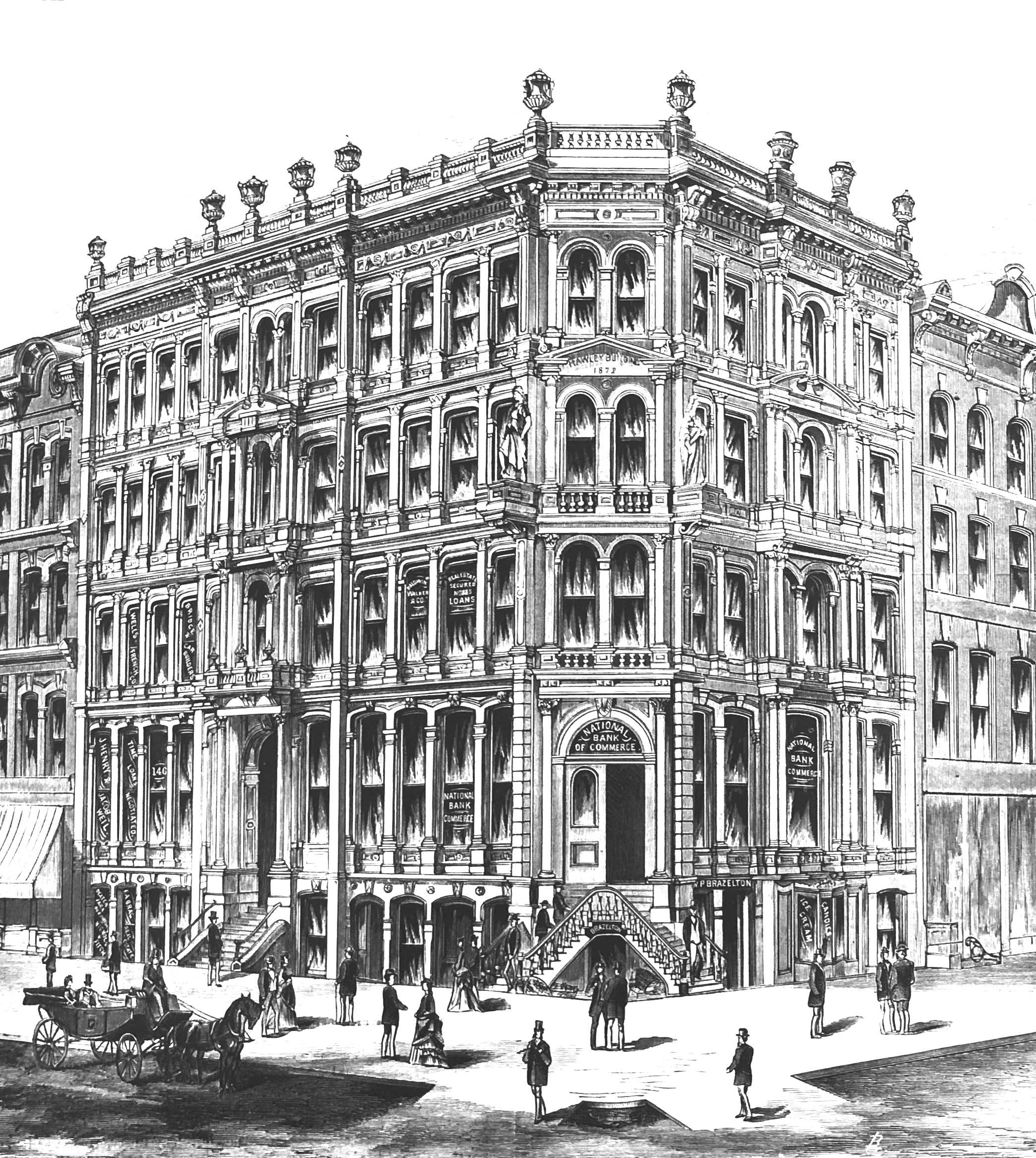 Baldwin, Walker & Co. deal very extensively in real estate on their own account, and make a specialty of judicious investments for non-residents. They have recently published a pamphlet referring particularly to loans on real estate in Chicago. This pamphlet contains a good map of the city, showing the parks and boulevards, etc., and copies of it will be supplied free of charge to non-residents interested, upon application to them by mail.

J. HENRY & JACOB WEIL.
This well known an reputable real-estate firm occupy a pleasant office in the Hawley Block, where they transact their large and growing business with real-estate buyers.

F. A. BRAGG & CO.
The pleasant basement office on Dearborn street is occupied by this real-estate firm, ever ready to serve their patrons. Mr. Fred. Bragg is one of our old-time real-estate men, who thoroughly knows his business.

NICHOLAS & FITCH
also have a splendid office in the Dearborn street basement, where their well-established real -estate business is conducted.

W. P. BRAZELTON.
This popular confectioner occupies the corner basement, with a splendid stock of everything in his line, his candles, fruits and celebrated ice cream being constantly in demand by our citizens.

WELLS FRENCH & CO.
Ascending to the second story of the Hawley Block, we find the great bridge builders of the West, Wells, French & Co., occupying a splendid suite of offices there. The works of this firm are situated on Blue Island avenue, near the intersection of Twenty-second sttreet, and are among the most extensive in the United States. 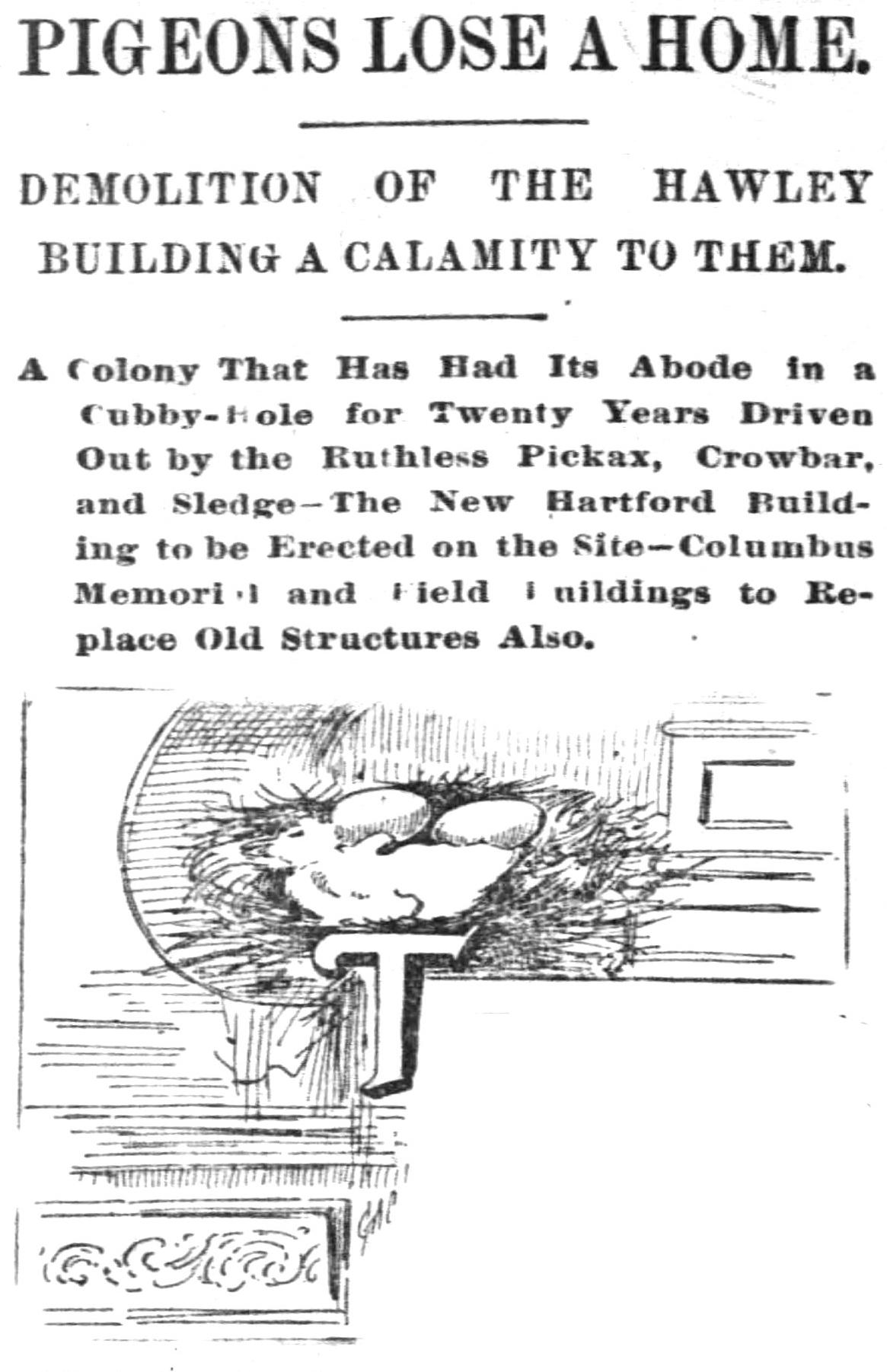 The pigeons are in trouble these days. The particular pigeons whose trouble was most serious yesterday were those across Dearborn street from The Tribune Building.

Their fate has been only a question of time for several months—ever since the owner of the big Hawley Building made up his mind to tear it down. But for a week it has been literally hanging over their heads in the shape of huge derricks and windlasses, and a small army of workmen armed with pickax, crowbar, and sledge-hammer. Yesterday fate would no longer be denied. The blow fell, and the home of the pigeons is no more.

When the Hawley building was put up shortly after the fire the pigeons looked it over and reasoned somewhat after the fashion:

Now, here is a massive structure that will endure for all time to come. The architect, bless him, has made the finest kind of a place for a nest under a sheltering piece of ornamentation between the fourth and fifth stories. What’s the matter with preempting this little cubby-hole? It’s in a nice neighborhood—in fact, a select neighborhood. We look directly into the editorial rooms of The Tribune; and besides reporters are nice, quiet people.

So a pair of pigeons duly preempted the nice little cubby-hole. This was twenty years ago. And these same pigeons, or their heir and successors and assigns, have ever since wooed and won and mated and nested and raised their young in that self-same cubby-hole in the Hawley Building. 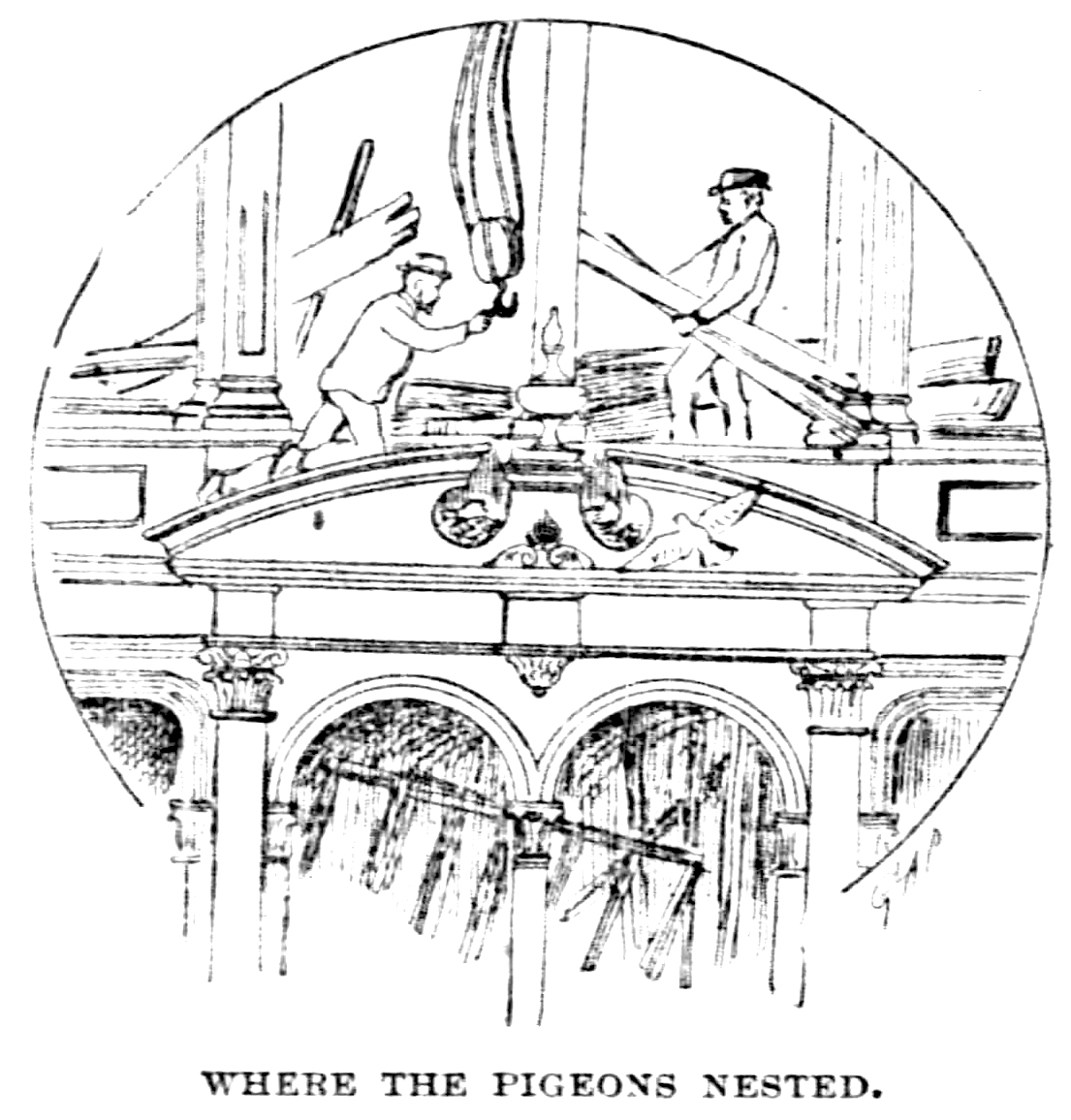 Cubby-Hole Torn to Pieces.
But alas! what do pigeons know of ground rents, and leaseholds, and earning capacity and such gthings? When a good many smart people were not smart enough to see the overgrown village just rising from its ashes and would jump to a city of 1,250,000 inhabitants within a score of years, how could the pigeons be expected to see so far ahead? But times do change, and so it came to pass that the big Hawley Building which would be considered a pretty fine sort of a structure in most cities, had to be torn down because it wasn’t good enough for Chicago. And thus it was that yesterday the pickax and crowbar of the workmen broke into the pigeons’ cubby-hole. A Tribune man saved what there was to save. But the nest was dismantled, the eggs cold and the nestlings dead. The parent birds had flown in their terror. All that was left of the colony was a pair of lusty young birds just ready to fly.

The New Nesting Place.
Twenty years ago the Hawley Building which stands—at least in fragmentary condition—at the southwest corner of Dearborn and Madison streets, was one of the finest office buildings in the city. It now has a value only as old iron and building material. It was built in 1872 by E. S. Hawley. It had the old bank entrance and was finished in black walnut. The exterior features consisted of the heavy copings and ornamentation which were sought after much at that time as they carefully avoided in modern office buildings. The Hartford office building which is to replace the Hawley block, will be fourteen stories high, covering 92½ = x 50 feet. It will be of the standard Chicago steel construction, faced with brick and terra cotta. The first floor front will be of shop construction, containing as much plate-glass as possible. In the front of the first floor stories stone will be used. Six tiers of bays will extend up from the fifth to eleventh story. A cornice will encircle the building at the twelfth story, and another heavy cornice will surmount the structure. 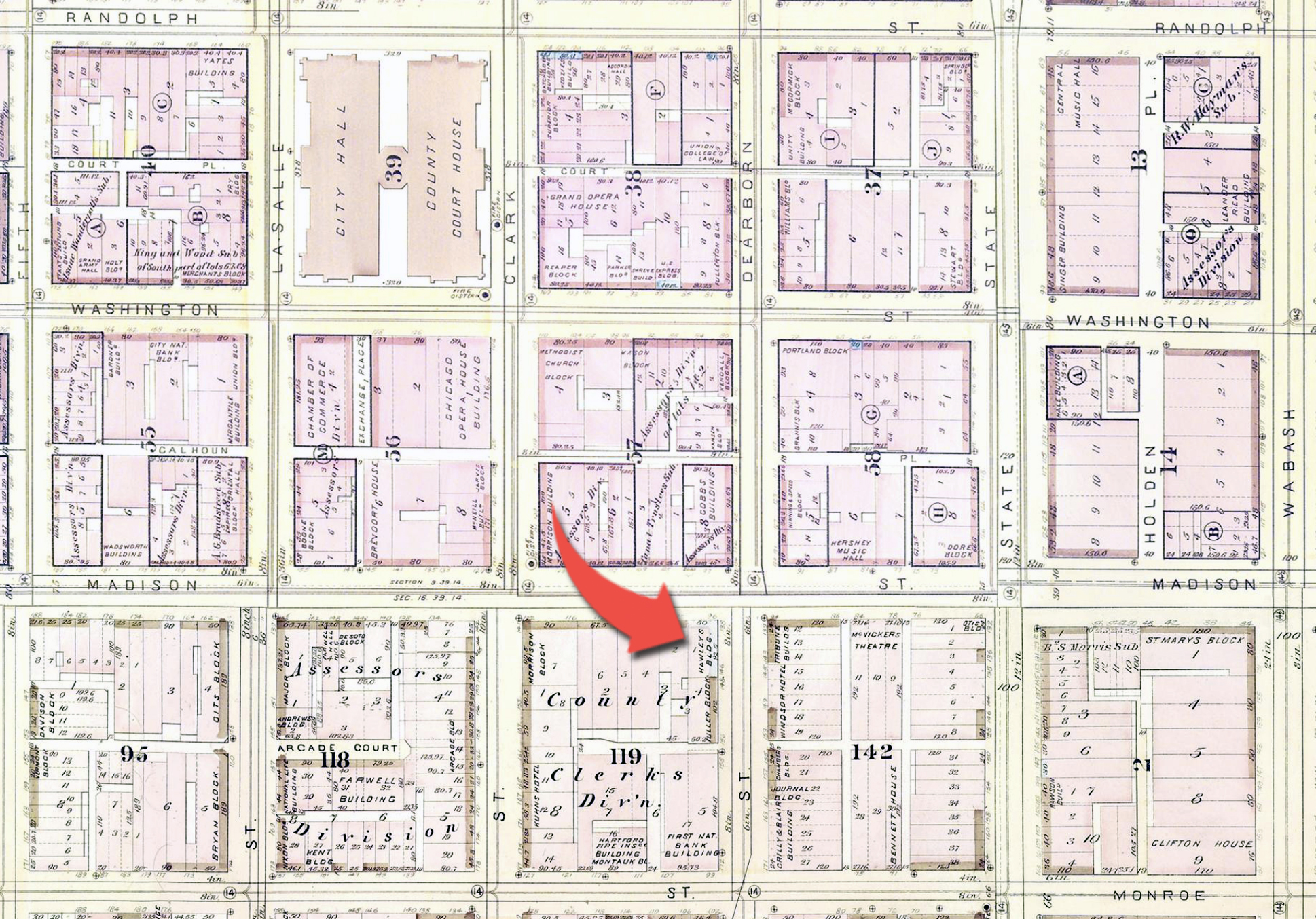