The First National Bank Building.
The First National Bank building, corner of State and Washington streets, is one of the many fine structures which have been erected this summer, and is worthy of an extended notice. This building has a front of 55½ feet on State streets and 35 feet on Washington street, and is to be five stories high above the basement story. It will be fire=proof in all its parts. As the walls are now built up to the third floor, the architecture is brought prominently out, giving certain promise of being one of the most elegant and thoroughly constructed buildings yet erected in this city.

The main feature of the building, and what is especially noticeable, aside from the general fine effect of the whole structure, is the corner, which is cut off diagonally to both fronts, projecting about three and a half feet from them, and carried up through the height of two stories, forming an arch of a very pleasant proportion as third front of fifteen and a half feet facing northeast. This front contains the principal entrance to the banking-room, which is to occupy the whole of the first story, and will be reached from the sidewalk by a flight of broad and easy steps. The doorway is exceedingly rich in detail, the archtrave over it being supported with four Corinthian columns, two on each side, the shafts being of Tennessee marble, highly wrought and polished, having bases and capitals of Vermont white marble polished and beautifully carved. The jambs of the door are also of the same material, and the whole is elaborately finished.

The combination of white marble with Athens stones and Tennessee marble pronounces an effect at once elegant and unique. The basement of the building is arranged for four offices, each having a very superior vault of undoubted construction as to fire and burglar proof qualities, and will be finished with first-class doors and locks. The floors of all offices in the basement will be laid with white and black marble tiling, and all the doors, casings and finish will be of iron.

The banking-room will have a marble floor, and a counter of elegant design, made of iron and marble. The vaults of the banking-room are very superior in quality and size. The cash vault, which is six feet by nine feet, contains a safe made expressly for the bank, weighs twelve tons.

The upper stories of the building will be finished in first-class offices, and will be reached through a wide hall from State street, which will contain the stairs, all of which will be of iron. No wood will be used in the construction of the floors, the beans being of iron. The ceilings will be made of corrugated iron on a new plan recently patented. On this corrugated iron a filling of concrete will be made of sufficient thickness to bring up all parts to the required height, and on this a floor of narrow planks will be laid, except in the basement, banking-room, and all the halls, which are to have marble tiling. The cornice of the building will be of galvanized iron of elegant design.

The entire building will be heated with low=pressure steam, generated in a boiler below the sidewalk. Particular care has been taken to provide ventilation to all the rooms and vaults, and all conveniences of every kind necessary to make a building of the very first class in all respects. Mr. E. Burling is the architect of this fine structure. 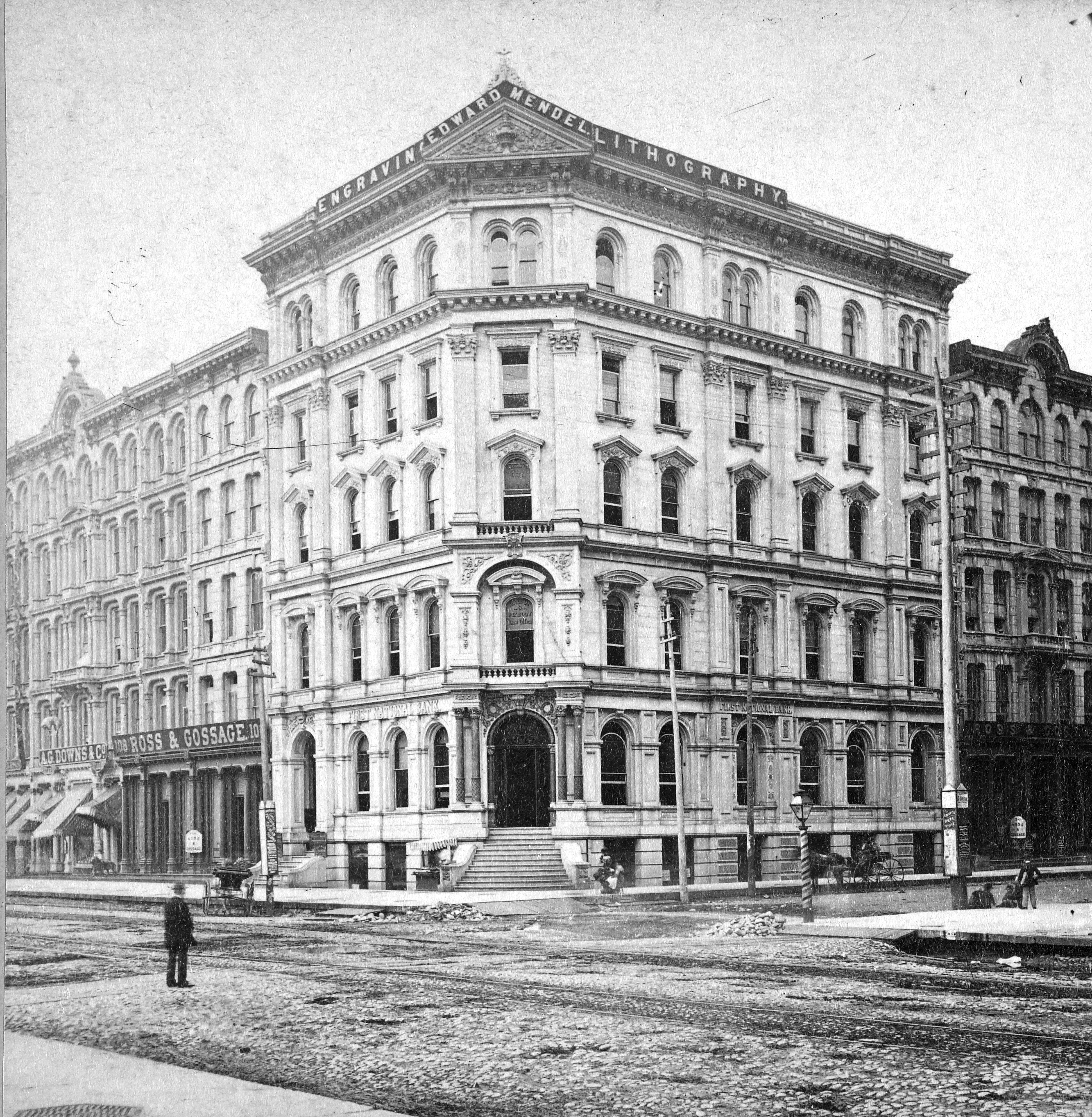 First National Bank of Chicago
Photographed by John Carbutt, about 1869 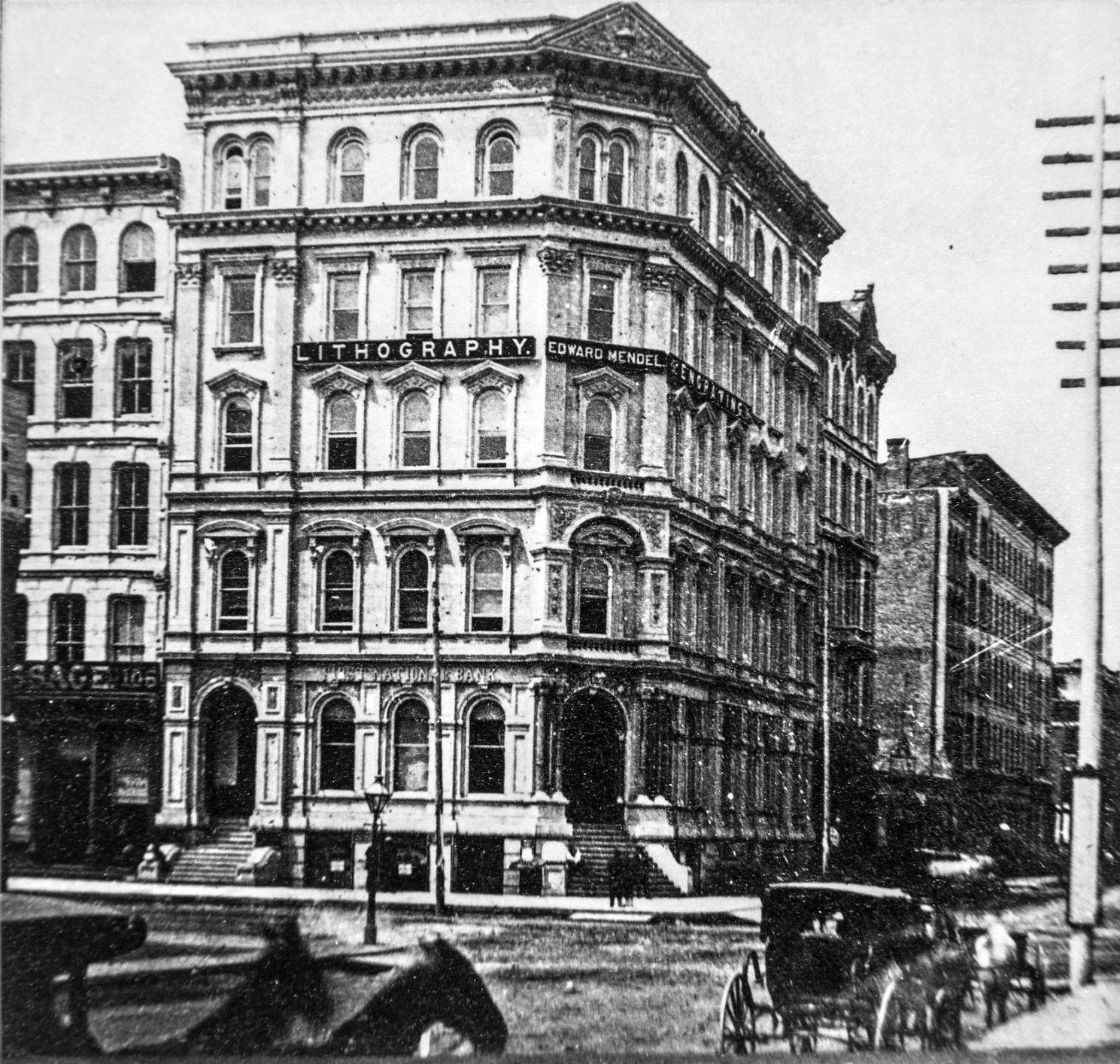 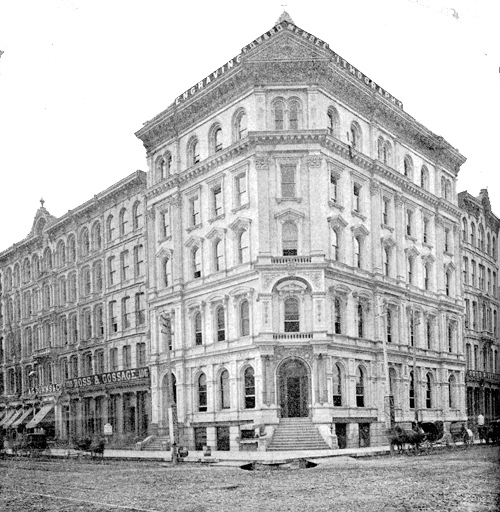 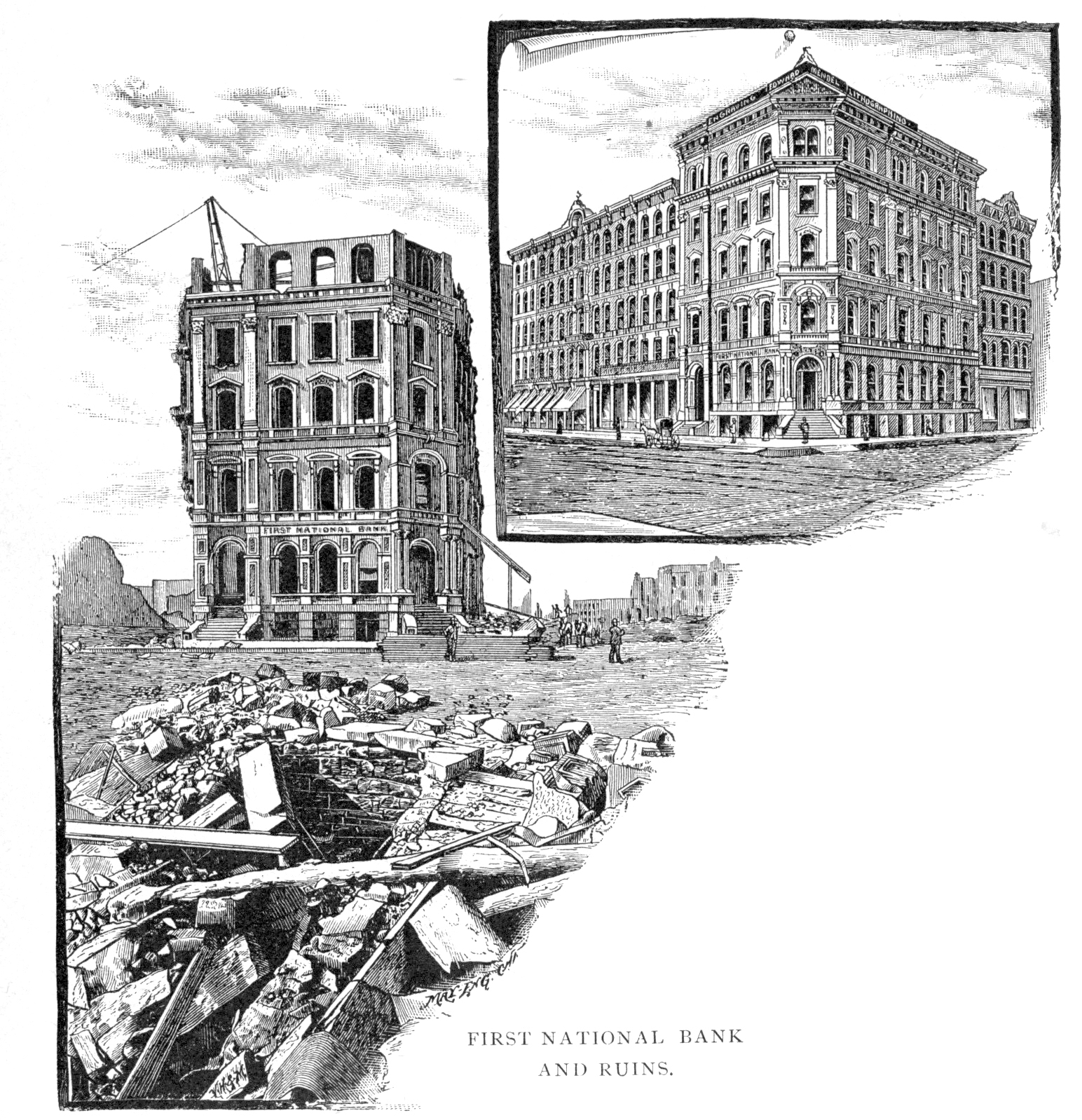 First National Bank of Chicago
Before and After Fire of 1871
History of Chicago, Andreas 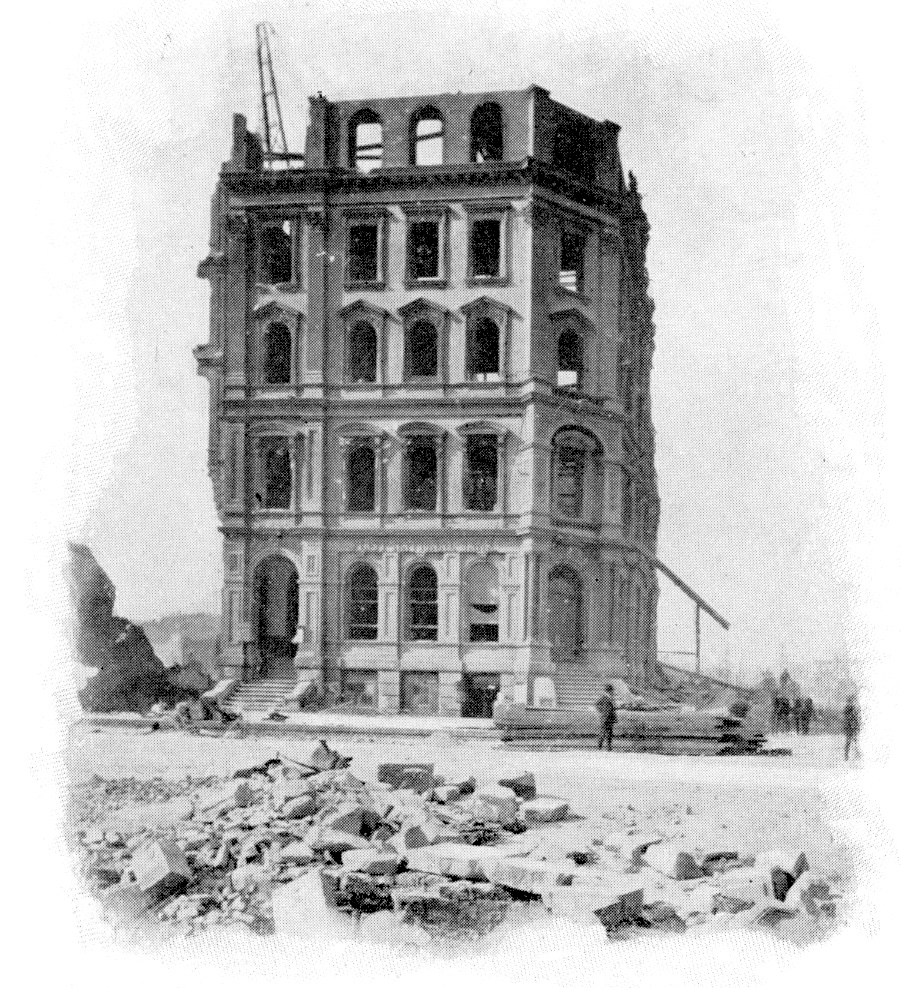 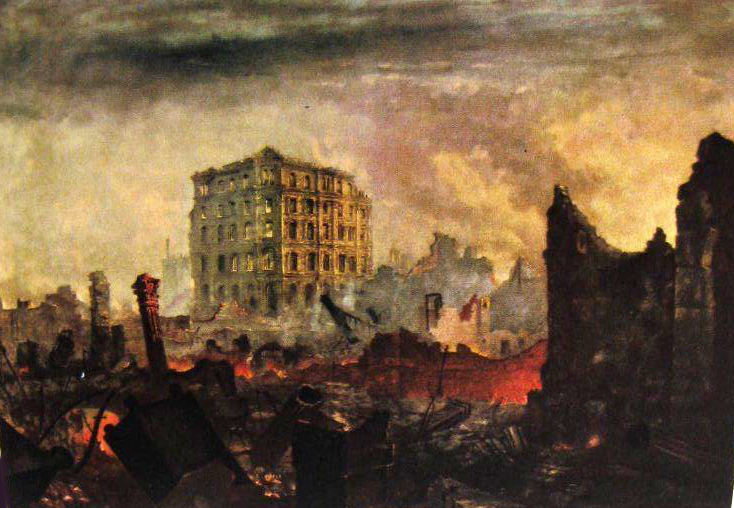 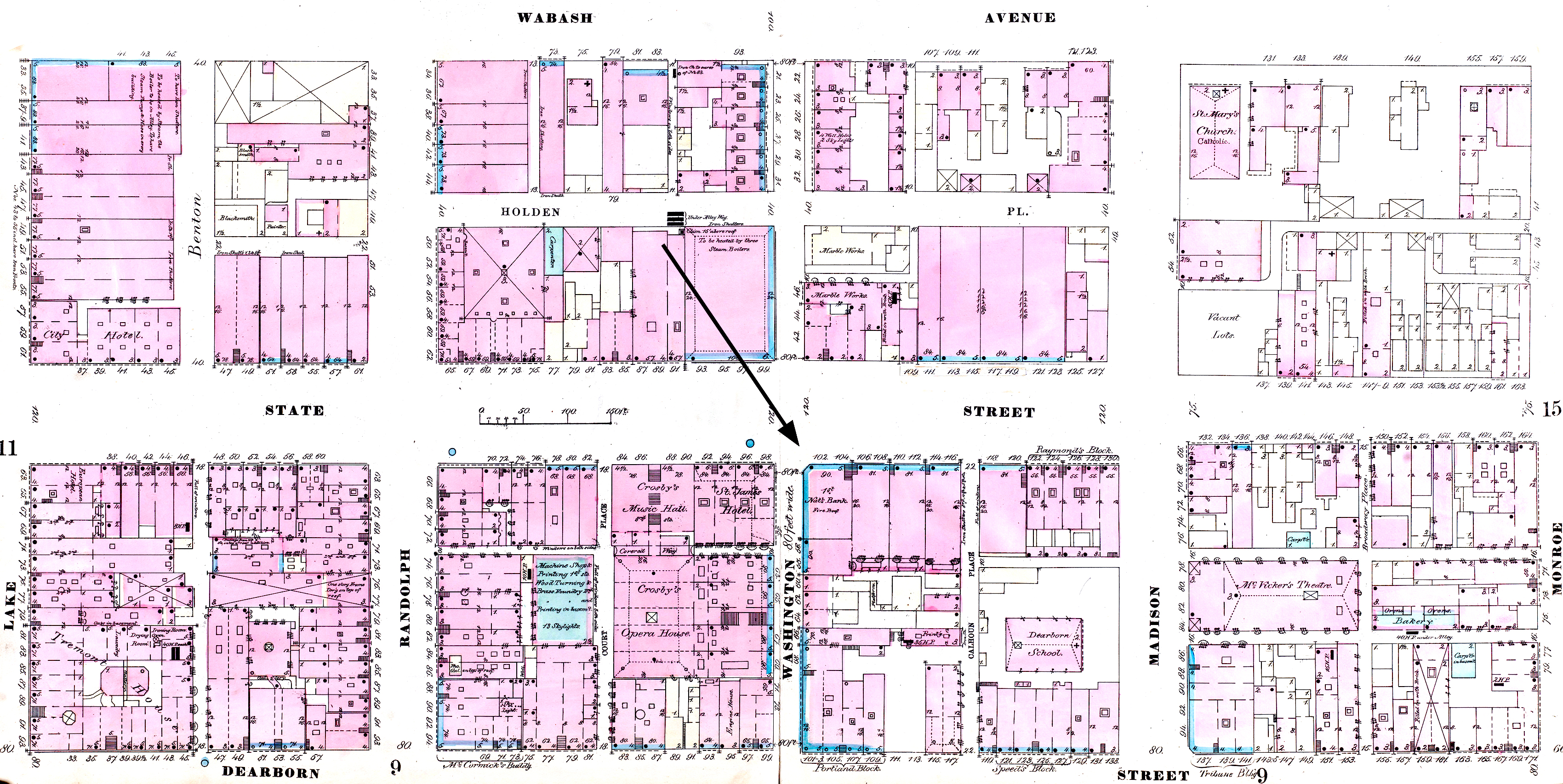 The History of the First National Bank of Chicago, by Henry C. Morris, 1902

The most important transaction of this era was the purchase of the lot on the southwest corner of State and Washington streets. Vice-president Gray, who was charged with the negotiations, secured the transfer of this piece of ground—measuring fifty-five feet on State street by eighty-four feet on Washington street—during the last week in March, 1867, for the sum of $83,500, being equivalent to $1,500 per foot on the State street frontage. The conditions of payment were one-fourth cash and balance in three equal installments, payable one, two, and three years after date, bearing interest at the rate of seven per cent semi-annually. In September, a building committee, consisting of Messrs. Nickerson, Walker, Gray, and Talcott, was appointed. A fire-proof edifice was projected, which was furnished and occupied in the spring of 1868.

The building was originally finished in 1868 at cost of $295,000, $75,000 of which was spent on restoration after the fire. It was considered a fire-proof house—iron, stone, and brick being the exclusive material, but it did not prove itself so in the presence of the great fire of 1871, for the inner vaults were the only portions of the building untouched by fire. Part of the walls fell in and the iron work was twisted or melted. It was a Florentine building, with balustraded portico in cut-off and pediment from the cornice. Prior to the introduction of modern houses the old First National Bank was considered a rare architectural work, and was spoken of in connection with the Palmer, Tremont, Field, and other leading houses.