The Inter Ocean Building.
Plans have already been drawn for the improvement of the property acquired by The Inter Ocean Building Company. The Haskell Building will be improved, refitted, and converted into a thoroughly modern structure, while the Kohlsaat corner will be denuded of the present structure to give place to a building that will harmonize in design with the adjacent block, to which it will be an addition. The corner will be one of the most attractive in the city, as it is one of the most valuable. It would be premature to give in detail the particulars of the project, as nothing can be decided until the meeting of the incorporators of The Inter Ocean Building Company, which occurs April 16. It may be stated, however, that the new Inter Ocean Building will be the most perfectly arranged, for its purpose, of any newspaper building in the city. The offices to be rented by the public will be entirely separated from the space occupied by the various departments of the newspaper. While, as before stated, details of the project can not yet be given, it is presumed that there will be no unnecessary delay in commencing the improvement, and that they will be hurried to completion. 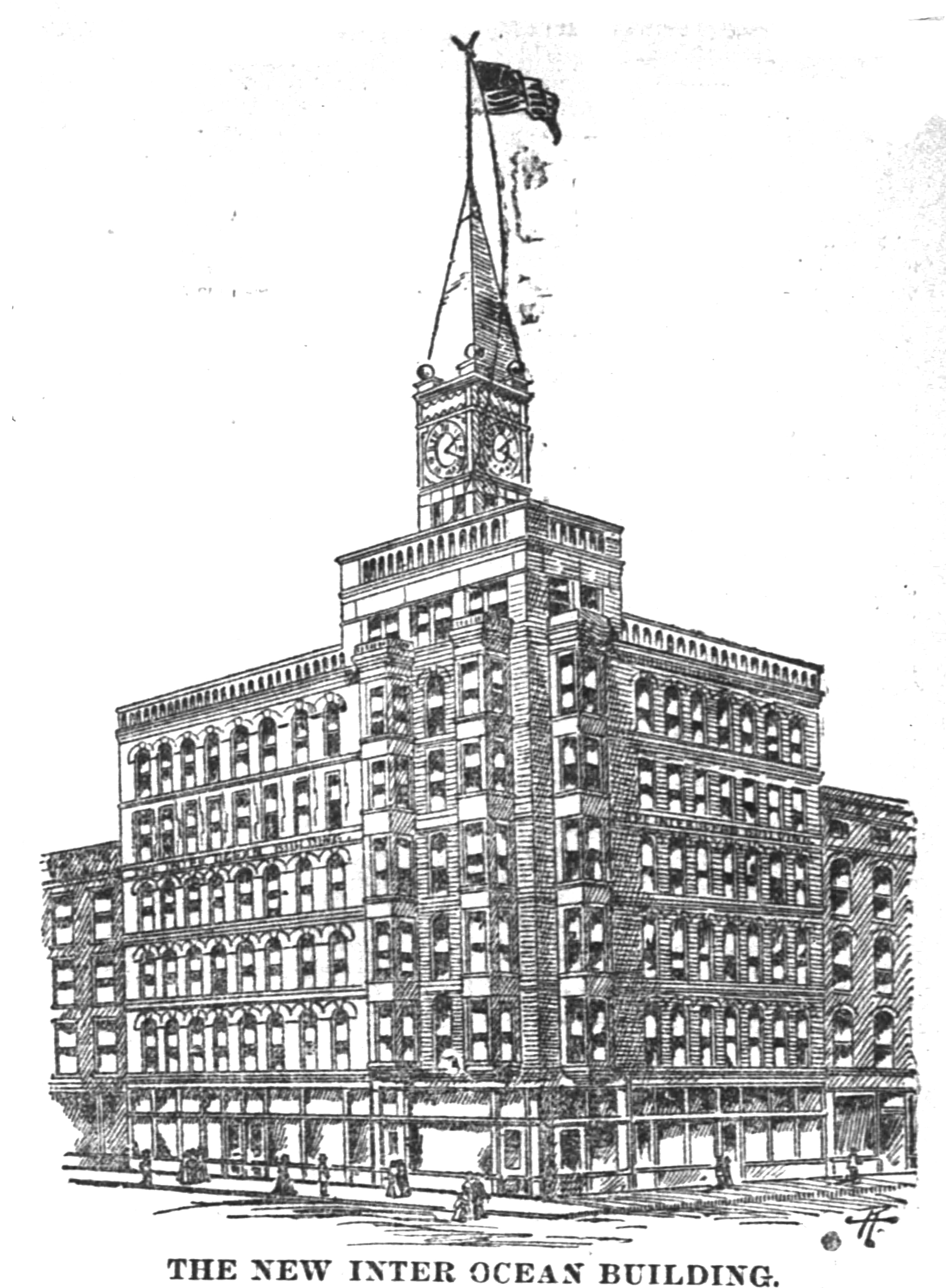 THE INTER OCEAN BUILDING.
In publishing the above cut of The Inter Ocean Building, now in process of erection, Frank Leslie’s Newspaper for July 20 said:

The Inter Ocean of Chicago, long recognized, as the stalwart Republican newspaper of the Northwest, is about to have a new home, which is fairly represented in the accompanying illustration. Four months ago Chicago real estate circles experienced considerable of a flurry in the “Kohlsaat deal,” in the announcement that the northwest corner of Dearborn and Madison streets, twenty by forty feet, had been purchased at the rate of $7,500 per front foot, the highest price ever paid fo property in the city. Subsequently the building surrounding the corner in the form of an L was purchased, and with the corner, transferred to The Inter Ocean Building Company (of which Wm. Penn Nixon is President and Clarence L. Peck Secretary and Treasurer), furnishing a frontage of seventy feet on Dearborn, one hundred on Madison, with extension to the alley in the rear, giving a total area of over 9,000 square feet. The building now in course of erection, is a substantial one of stone, the corner extension being fire-proof and seven stories high, surmounted by a tower. The upper (seventh) story of the building, not shown in the illustration, has an arched roof of glass and iron, and will serve for the composing-room. The Inter Ocean Building will be a prominent one, and, considering its central location, a veritable landmark. 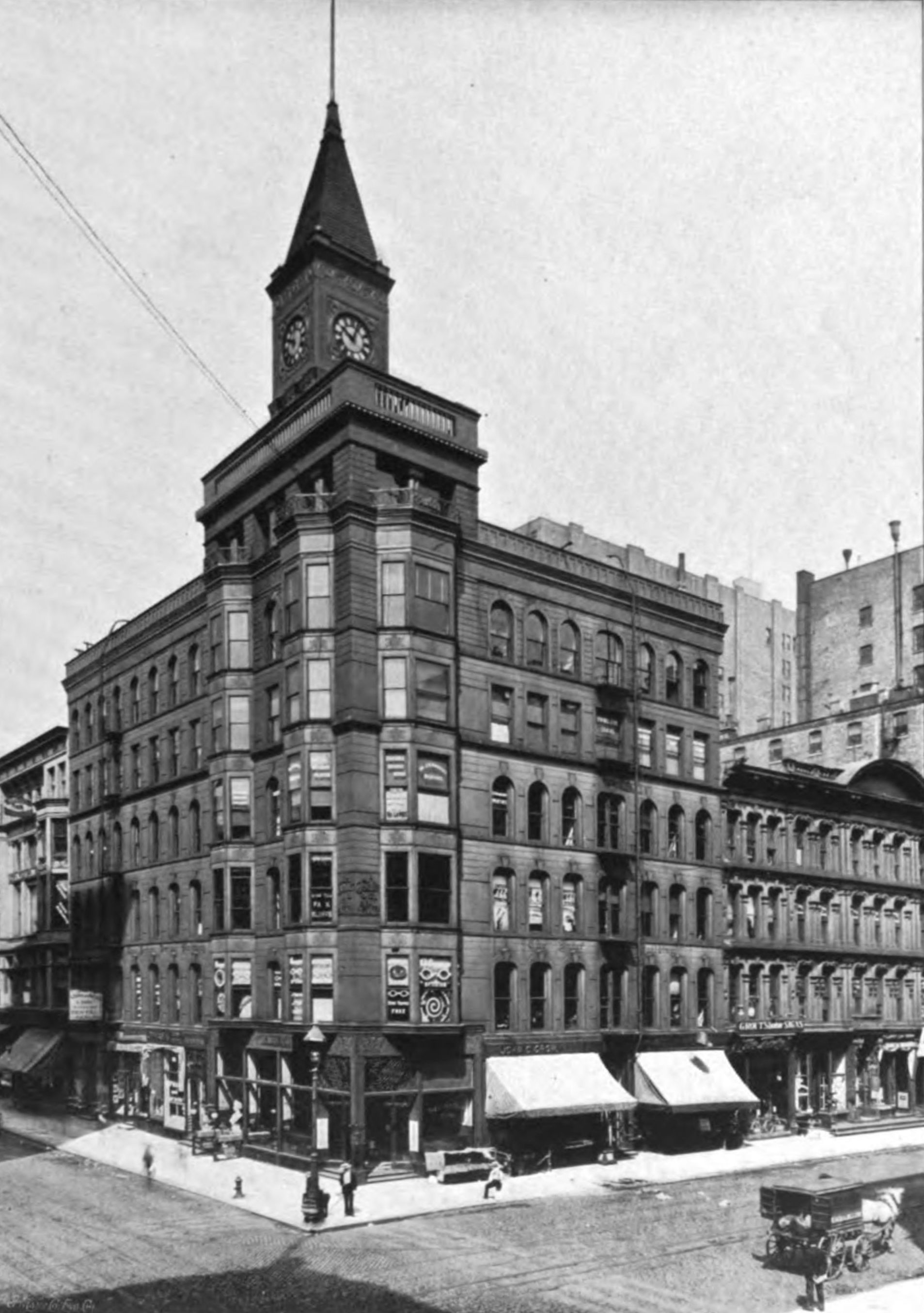 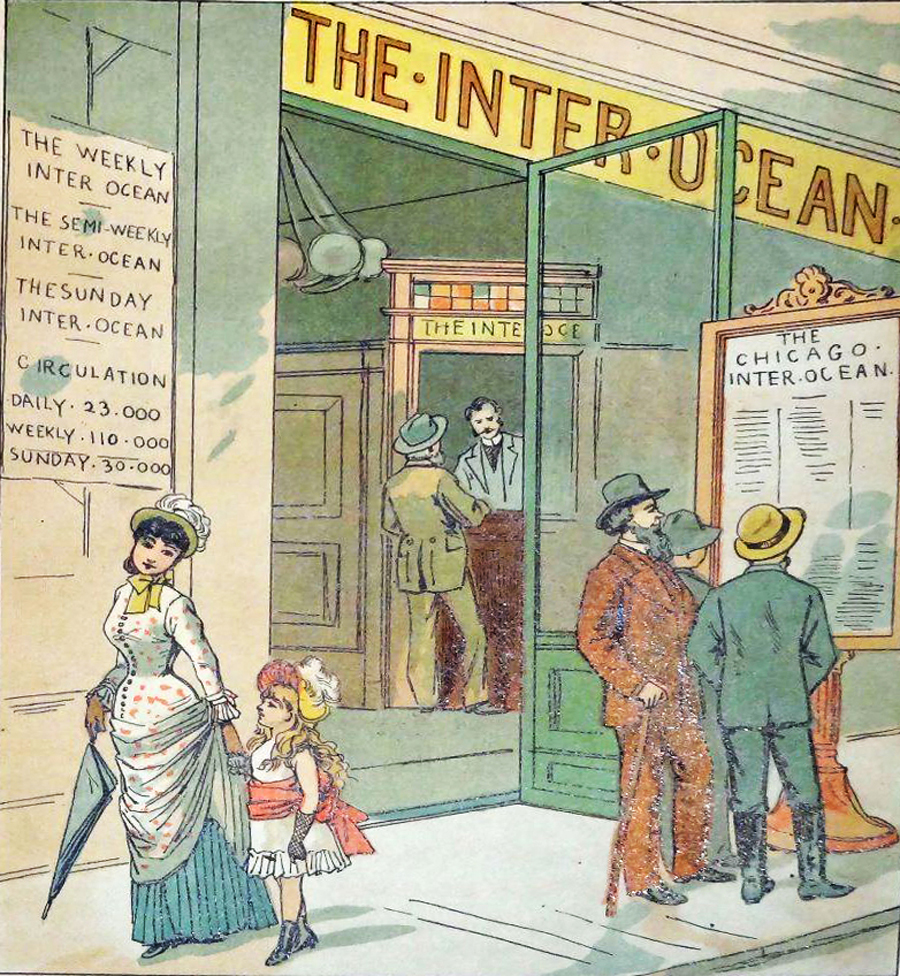 The Inter-Ocean building entrance as depicted by D. Dalziel
Circa 1890

The Inter Ocean can justly take a pride in commending to its readers this handsome volume of 470 pages, profusely illustrated. As a fine specimen of artistic work and all that belongs to the toolmakers’ art, both in print and birding. It has at no time been excelled. The value of its text can be best observed by reading the short preface to the volume by the editor. as follows:

In presenting this book to the public, the claim is not made that it Is tte complete. comprehensive history that Chicago ought to have, but that it contains some important facts concerning the beginning and growth of the city than any other Ike publication. It is also believed the arrangement of facts and eveuts will be found superior. The book would bare been more complete and published earlier but for the sudden death of the Hon. Frank Gilbert, who was engaged in writing it when, on the fourth day of November, 1839. he was called to the other world. His plans for the work, however, were carried on to completion. It was a part of his plan that after the chapters on the early settlement of the city, its growth and development should be treated topically. It was his thought that facts and events would thus be placed before the reader more attractively, and the book be better adapter for the purpose of reference. It is hoped that this method of treatment will find favor with readers. The great public undertakings, which are closely connected with the life and growth of the city, are especially exploited, and the private and personal enterprises which have been great aids in the building of the city are given the attention they so justly deserve. The men, too, whose ability, genius and forethought have added to the city’s character, wealth and renown. have been remembered, and not the least interesting. historically considered, are the biographies of these citymakers. This is not a pretentious or great work, but it is hoped that it will be found useful and given a place in many libraries.

The book will be ready for deliver to subscribers at an early date, and will be for sale at The Inter Ocean counting-room. 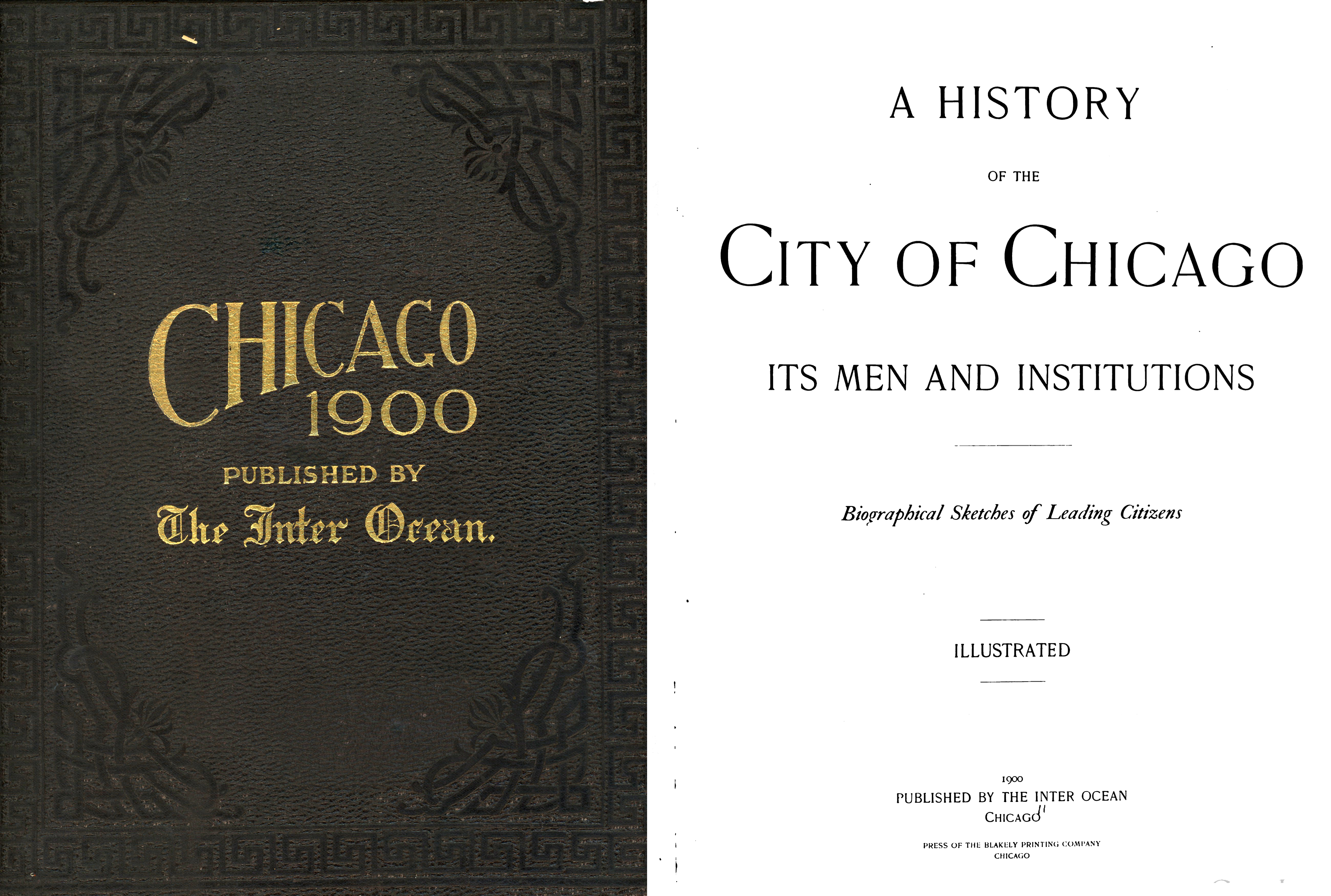 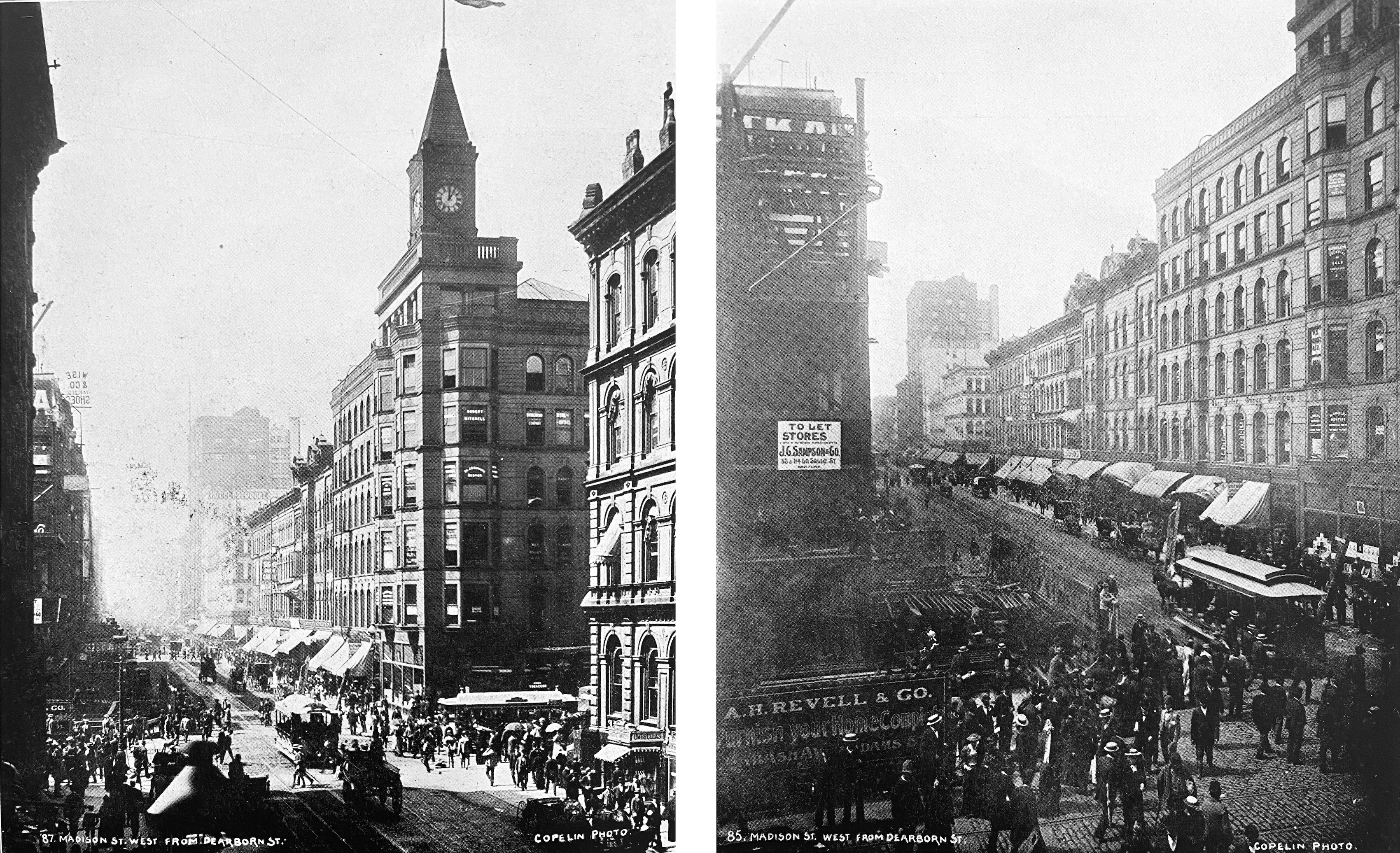 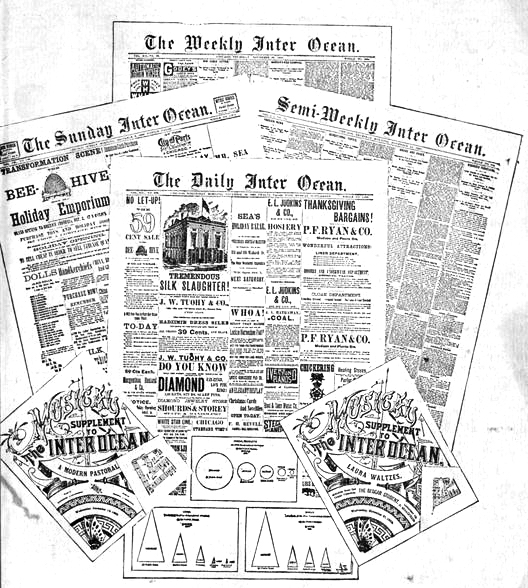 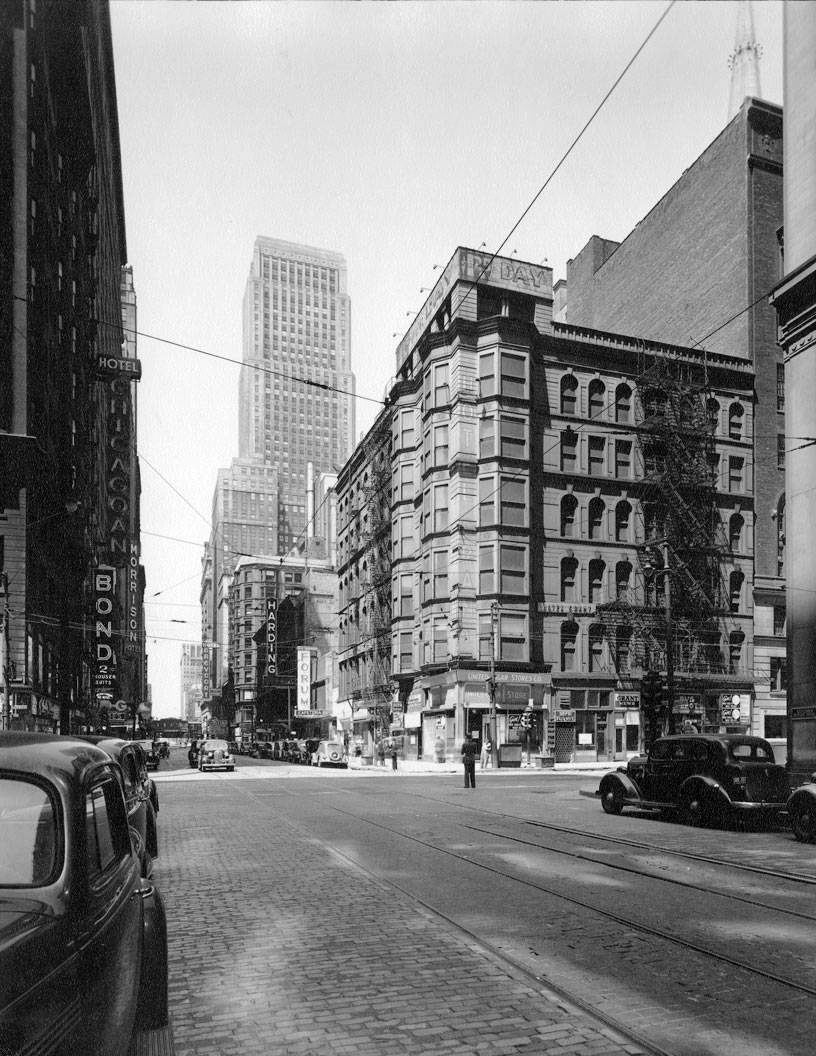 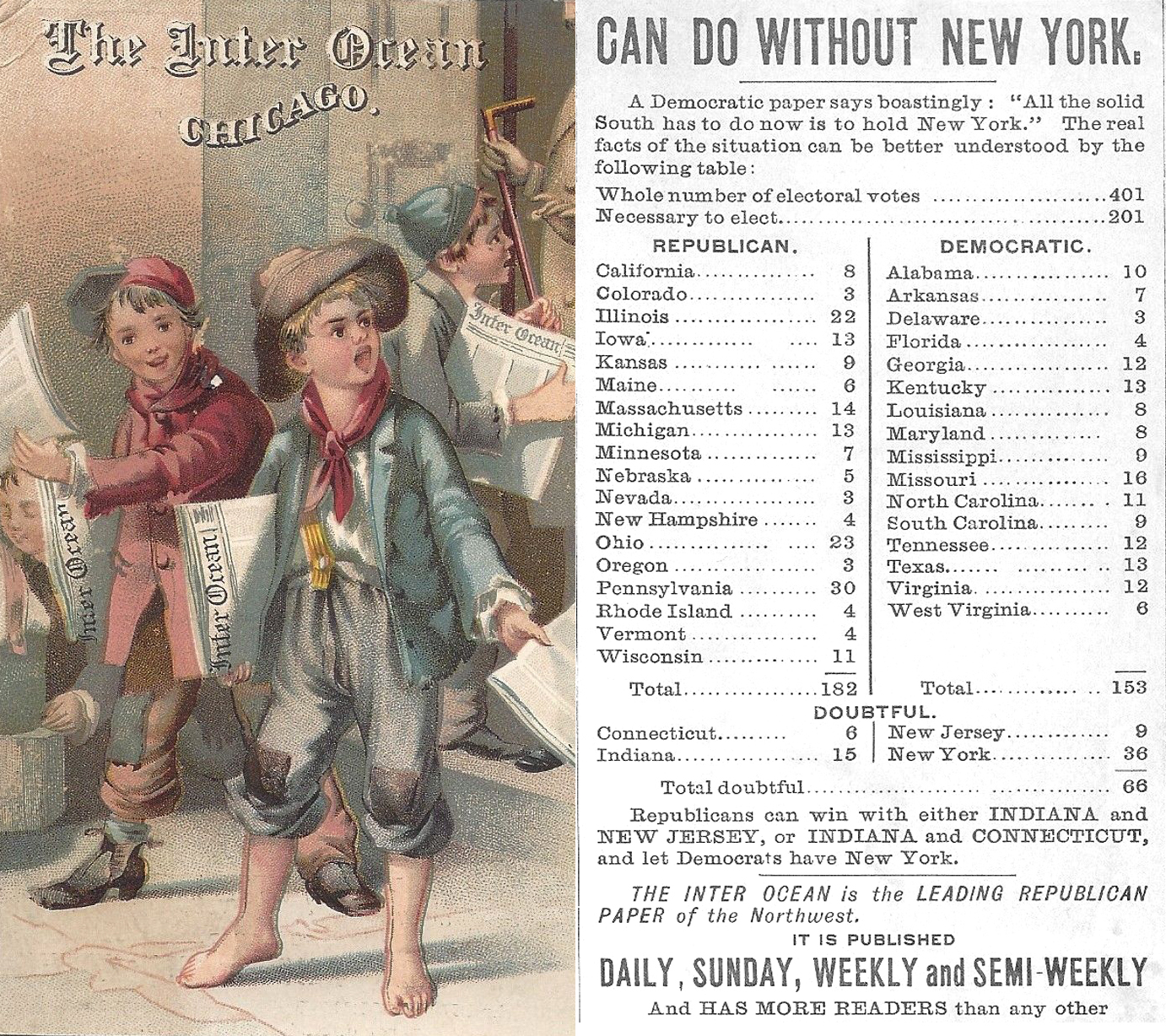 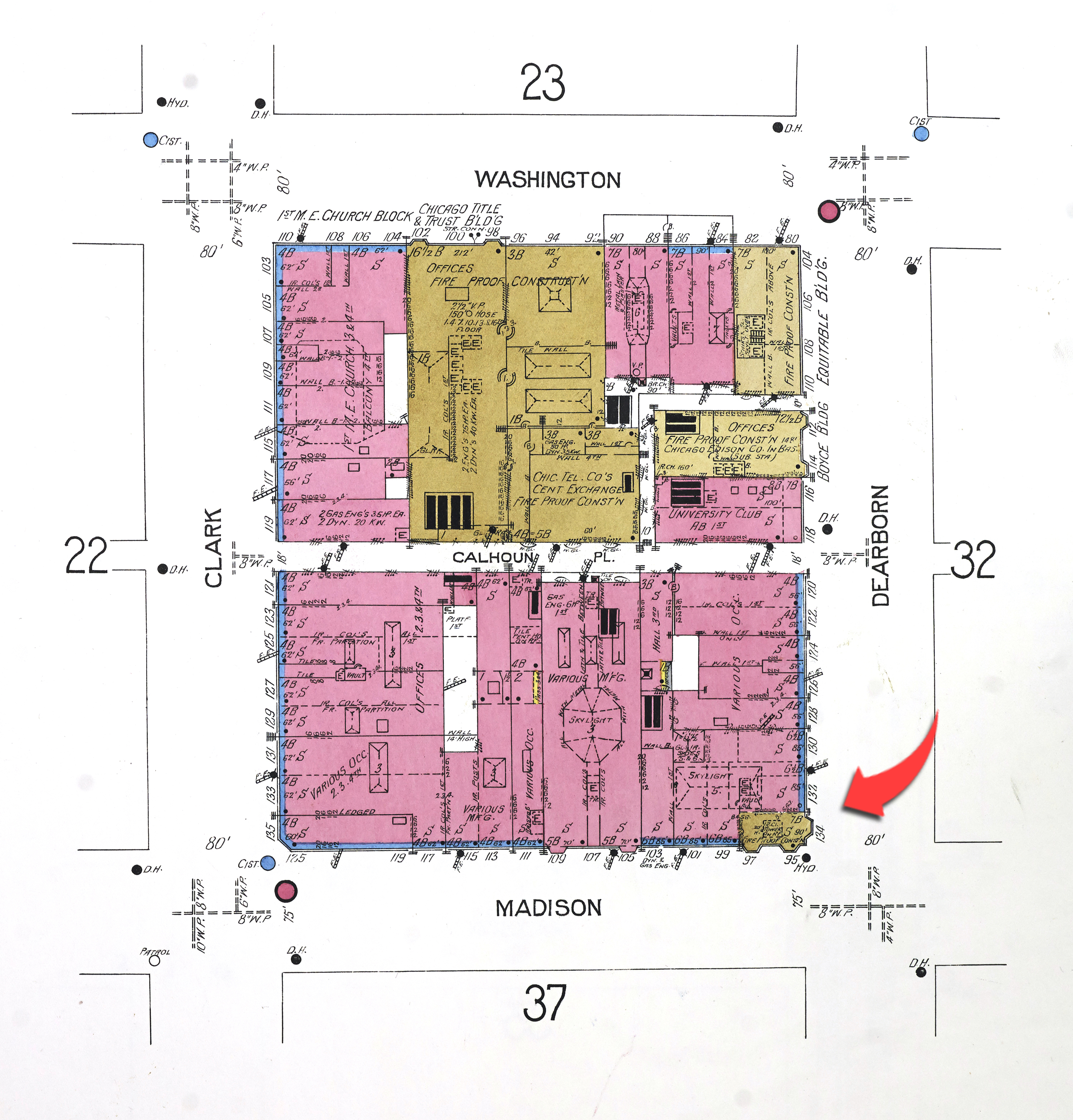 This two story building will replace the old Grant hotel at the northwest corner of Madison and Dearborn streets. Ot will contain a theater, stores, and a rathskeller in the basement. Lowenberg & Loewenberg is the architect. 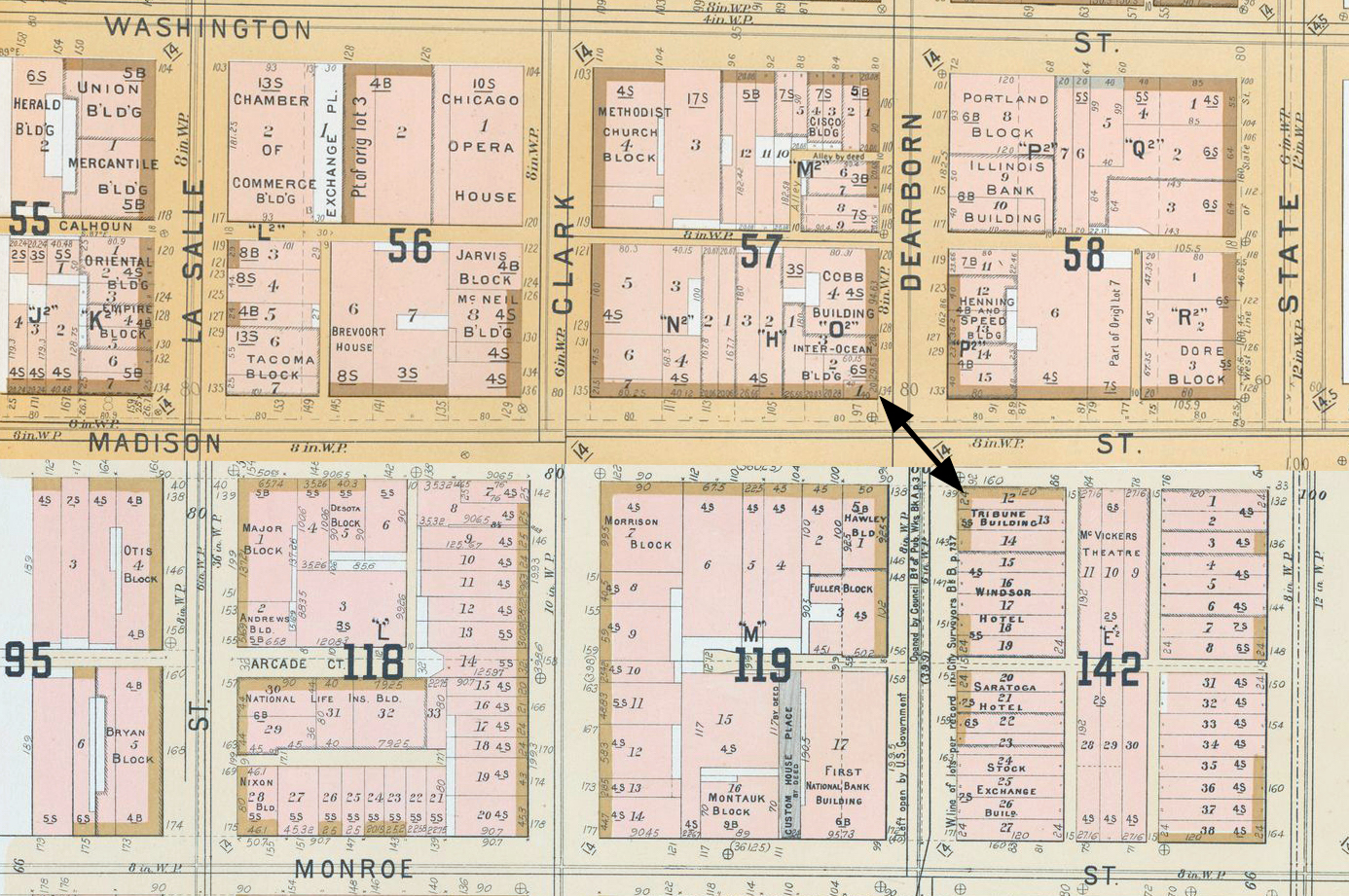