Iron Front Building, Bos. 335 and 337 Wabash Av.
That popular and beautiful thoroughfare—Wabash avenue—continues to grow daily more and more interesting, as block after block of elegant buildings spring up, as if by magic, along its course. Here is to be the future centre iof attraction in our new city, and the structures going up there or to be built are being designed and adopted to the future importance of the street.

One of the handsomest of the new structures is the magnificent iron front building, Nos. 335 and 337, between Congress and Harrison streets, on the west side of the avenue. This building has been erected by Mr. William B. Pierce, a well known citizen, who has spared no trouble or expense to make it a thoroughly substantial and convenient business structure. The front is of iron, unique and handsome in design, painted a creamy white. The windows are French plate glass, and the whole edifice is constructed of the best material, and most perfect workmanship. 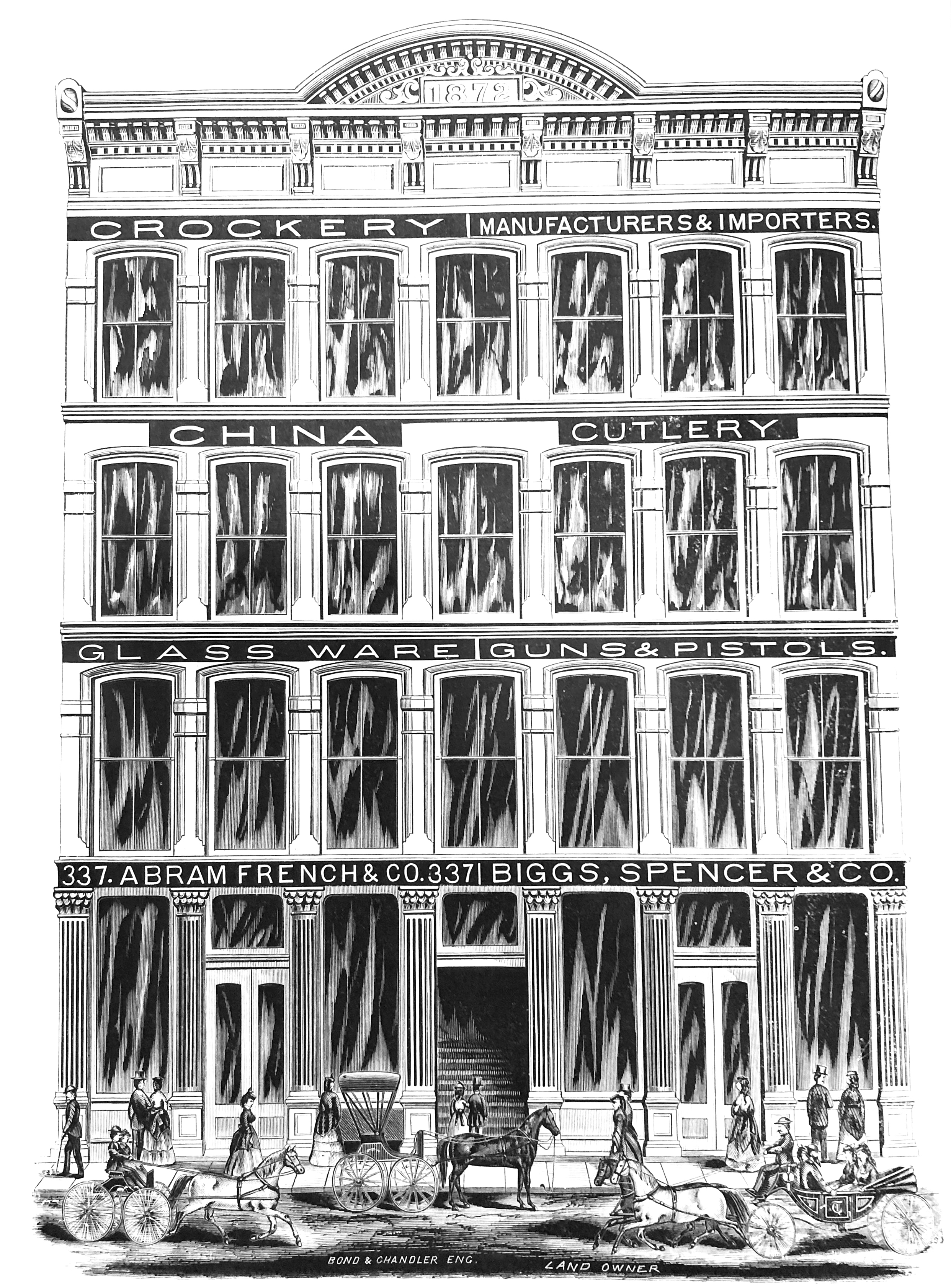 Messrs. Abram French & Co.
Passing along the avenue we notice that this house occupy the south store of the block, from basement to attic, with an elegant and valuable stock of China, crockery and glassware. Before the fire this house was known to many of our citizens, as well as to the buyers of Boston. Messrs. Abram French & Co. are one of thise old houses of the Hub, whose origins dates back before Chicago had a name on the map. It was opened in Boston in 1822, wince which time it had maintained an honorable and enviable record. After the fire this firm decided to open a western house in Chicago, and through their heavy capital and resources, aid in rebuilding the city and keeping its trade. The result is shown in our illustration, the Chicago house being under the management of able and experienced partners.

In this connection it may be interesting to speak of the past history of this great house which has come to dwell among us, and put its shoulder along side of ours to the wheel of western progress. It was established at Nos. 151 and 153 Milk street, Boston, in 1822. The original building being found inadequate to meet the increasing wants of the business, in 1847 it was torn down, to be replaced by a handsome granite front store, five stories in height. In May, 1862, however, this large building, together with an immense and valuable stock, was totally destroyed by fire. With characteristic energy, the proprietors immediately went to work, and erected on the old location the spacious and elegant building that now stands there.

The main business of this firm is wholesaling to the trade in all parts of the United States and Canada, their customers being scattered over the country from Maine to California. Being one of the largest importers of China and glassware in America, and also the manufacturers’ agents for some of the largest potteries and porcelain makers in Europe, they at all times have an immense and attractive stock for customers to select from, and conduct as large a trade as any similar establishment in the country. Every article in their line of business, in all the varieties, from the costly decorated China to the cheap earthenware, may be found in their warerooms. Another department contains all their silver plated ware, in all its branches, many of the articles rivaling solid silver in elegance and richness of design. A specialty is made of cutlery, and all the various articles necessary in thoroughly fitting out hotels, steamboats, restaurants, etc., as well as private families. Their long experience and well-established connection with the most celebrated manufactories of Europe, give them unusual facilities for collecting their attractive stock, and the enterprising proprietors and accommodating salesmen exert every effort to please their customers.

The Land Owner desires to congratulate our citizens upon the accession of such a firm as this. With men of capital from the east constantly coming here, of which Messrs. Abram French & Co. are a noted example, who is not able to forecast the destiny of our city?

Messrs. Biggs, Spencer & Co.
The north store of this block, No. 335 Wabash avenue, has been built and furnished for the accommodation of the large business of one of our oldest and most reputable houses, Messrs. Biggs, Spencer & Co., manufacturers and importers of Cutlery and Guns. This is a representative house, it being the oldest concern in this line in the Northwest, With ample capital, experience and energetic management, this firm has weathered all financial storms, and is to-day in a position to command and handle an immense trade. Biggs, Spencer & Co., are manufacturers of Cutlery to a large extent, producing a line of goods unexcelled, and in addition they import all the leading foreign makers, besides representing several domestic manufacturers.

Mr. Spencer resides a part of the year in Europe, and for the last six months has been supervising their manufactory in Sheffield, England. As a result, they are now offering the finest and most elegant stock of cutlery, guns, etc., etc., ever imported into this city. Among the first to avail themselves of the new facilities for direct importation in bond, scarcely a week passes but finds arrivals for them at the custom house, and there is little doubt but that many will follow their example, and cut off the profits and charges that in the past have been paid to Eastern cities.

The rapid growth of Wabash avenue heralds the day when it will be the Broadway of the South Side. The Post Office, Aiken’s new theatre, the Tremont, Matteson, Gardner, and Palmer’s Grand Hotel, are all near at hand. The friends and customers of Messrs. Biggs, Spencer & Co., throughout the Northwest, will congratulate them upon securing, so soon after the fire.

It is alike creditable to individual enterprise and to the city to see old and established houses like this again in full blast, as if no fire had interrupted the ordinary course of their business, or interfered at all with their plans. But merchants like Biggs, Spencer & Co., think too much of their reputation in the commercial world to allow themselves to beat by fire. Their old quarters were considered good and commodious, but now they are even better housed, while their stock will be correspondingly increased, and their facilities for handling trade and satisfying customers are considerably amplified. An old philosopher once said that men make their own fortunes and then call it fate. Chicago merchants owe fate nothing—they have fought even destiny itself, and like Biggs, Spencer & Co., many of them have come out of the fray victorious.

Abram French & Co.’s Establishment.
Theb opening of Abram French & Co.’s Chicago branch, No. 337 Wabash avenue, yesterday, was one of the events of the season, and in every respect a decided success, their elegant store being crowded from 10 o’clock in the morning till 9 in the evening with delighted visitors, who found great pleasure in examining the rare and beautiful selection of goods on exhibition. Abram French & Co. have fully organized their business in all its departments in this city, and from present indications we bespeak them a very liberal share of the patronage of the citizens of Chicago.

Messrs. Biggs, Spencer & Co., who occupy No. 335 as dealers in Guns and Cutlery, were formerly located on Lake street. The gentlemen who compose this firm are among the fortunate men of Chicago. A few days after the fire many Chicago firms announced their ability to pay one hundred cents on the dollar of all their liabilities, and this firm was one of the number. This announcement lifted a corner of the pall which was settling on the public mind in that day of gloom. Their orders were all promptly filled without interruption, and in three months they were buying so extensively of their special goods that one invoice was kindly divided to accommodate a New York wholesale house, who could obtain the goods in no other way.

No. 337 is occupied by Abram French & Co., with a large stock of china, glass, and silver-plated ware, and cutlery. This firm makes a specialty of elegant Bohemian and other rare goods. It is a new house in Chicago, being a Boston firm, and the same in name that existed in Boston in 1822. It is now continued in the same name, with some junior members added. After fifty years it adds a house in Chicago as the great distributing centre of the country; and the young and energetic members of the firm in this city declare their expectation of eclipsing the Boston firm. 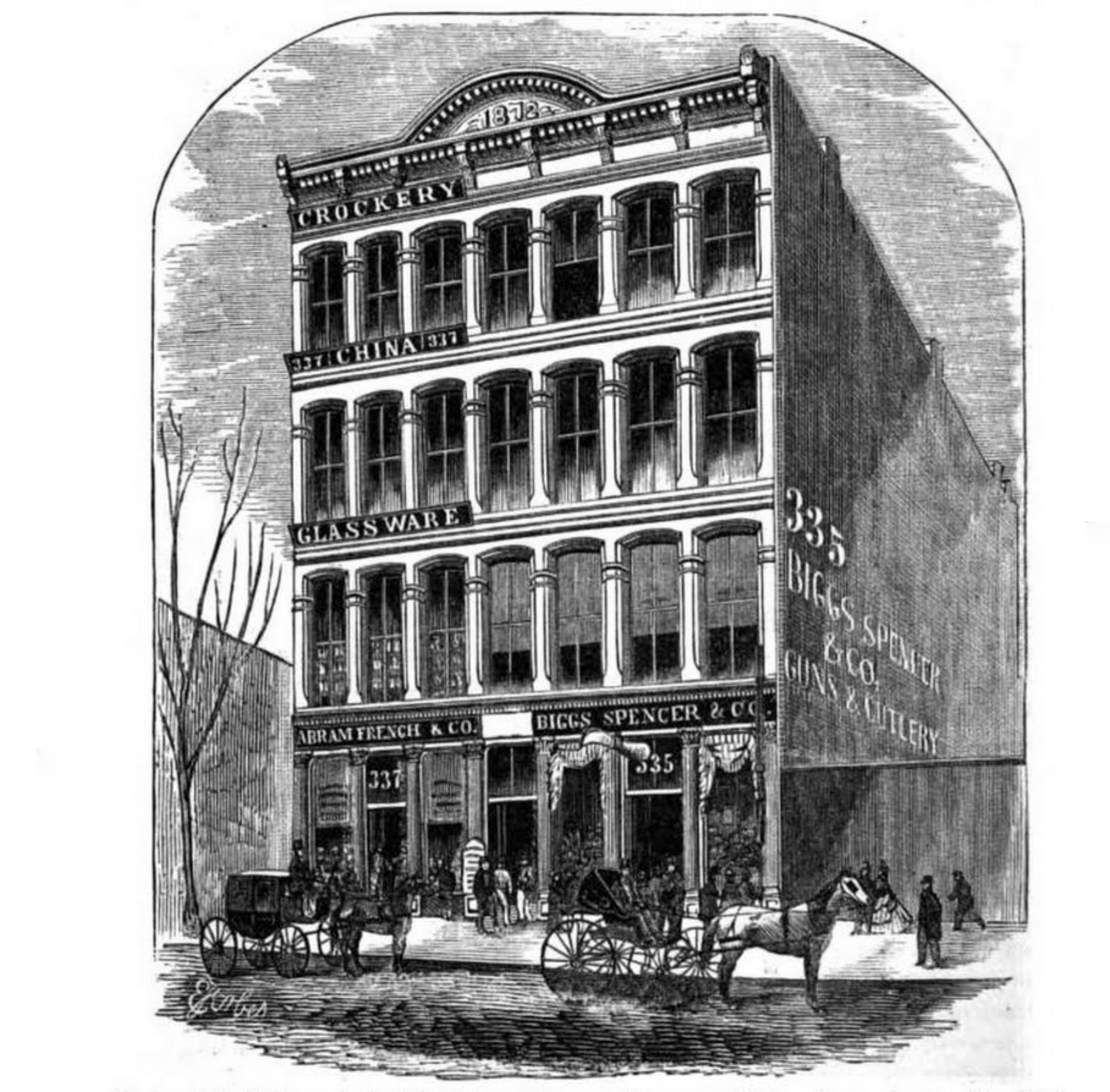 The building shown in our annexed engraving stands but a few feet from that now used as a post office, and which, as the then Wabash avenue Methodist Church, after losing one of its towers in the fire, was permitted to stand as a barrier for the protection of the southern and most beautiful residence portion of the city. The building shown in the engraving was commenced by Wm. B. Pierce in the month following, for Messrs. Biggs, Spencer & Co., dealers in Cutlery and Firearms, and Abram French & Co., dealers in China and Glassware — names familiar to most of us in the eventful mercantile history of our city, as well as that of Boston, where the house of Abram French & Co. was first established, in 1822. Recently, the rapid development of the West, added to the increasing magnitude of their interests in this city, necessitated the opening of the Chicago branch, which, uniting the capital and experience of the old house with the new and vigorous energy of its resident partners, promises ere long to outshine the parent concern itself.

Of Biggs, Spencer & Co., as a firm, whose members have been identified with Chicago since 1855, and well known to us all, we will only add that the facilities for economical production they now and always possessed in Sheffield, added to their long experience as importers, commend them to the acquaintance of every merchant dealer in the Northwest. Where shall profitable investments be made, if not with those who have given to their own branch of business the earnest labor and patient study of many years, and who, by continued residence in foreign markets, and ever new and elegant designs, secure always the best article at the lowest cost?

China and Glass.
All Bostonians and New Englanders will gladly congratulate Chicago upon her having established in her favorite avenue a retail branch of the well-known importing house of Abram French & Co. The highest reputation has placed this firm at the head of the trade, and everybody should see their large stock at 337 Wabash avenue. Their new premises at Nos. 101 and 103, will soon be ready, and meanwhile they are enticing purchasers of recherché and useful articles by very attractive prices.

Mr. Edwin A. Potter was born in Bath. Me.. in 1845. and was educated in the public schools. When Abram French & Co. of Boston opened a Chicago branch, in 1872. Mr. Potter was here to take charge of the office. He continued with them until 1879, when the firm of French. Potter & Wilson. dealers in china and glassware, was formed. This was dissolved In 1880, and Mr. Potter entered the firm of Lyon, Potter & Co. Owing to the death of Mr. Lyon and Mr. Steinway of the firm, it was dissolved late in 1897, and in the following March, Mr. Potter went into the American Trust and Savings Bank. At the death of General McNulta Mr. Potter was selected for receiver of the National Bank of Illinois and the Calumet Electric road. He is a director tn the Chicago branch of the Audit company of New York.

Mr. Potter is prominent as a clubman. belong a member of the Chicago, the Union League, the Chicago Athletic, the Kenwood,and the Midlothian Country clubs. 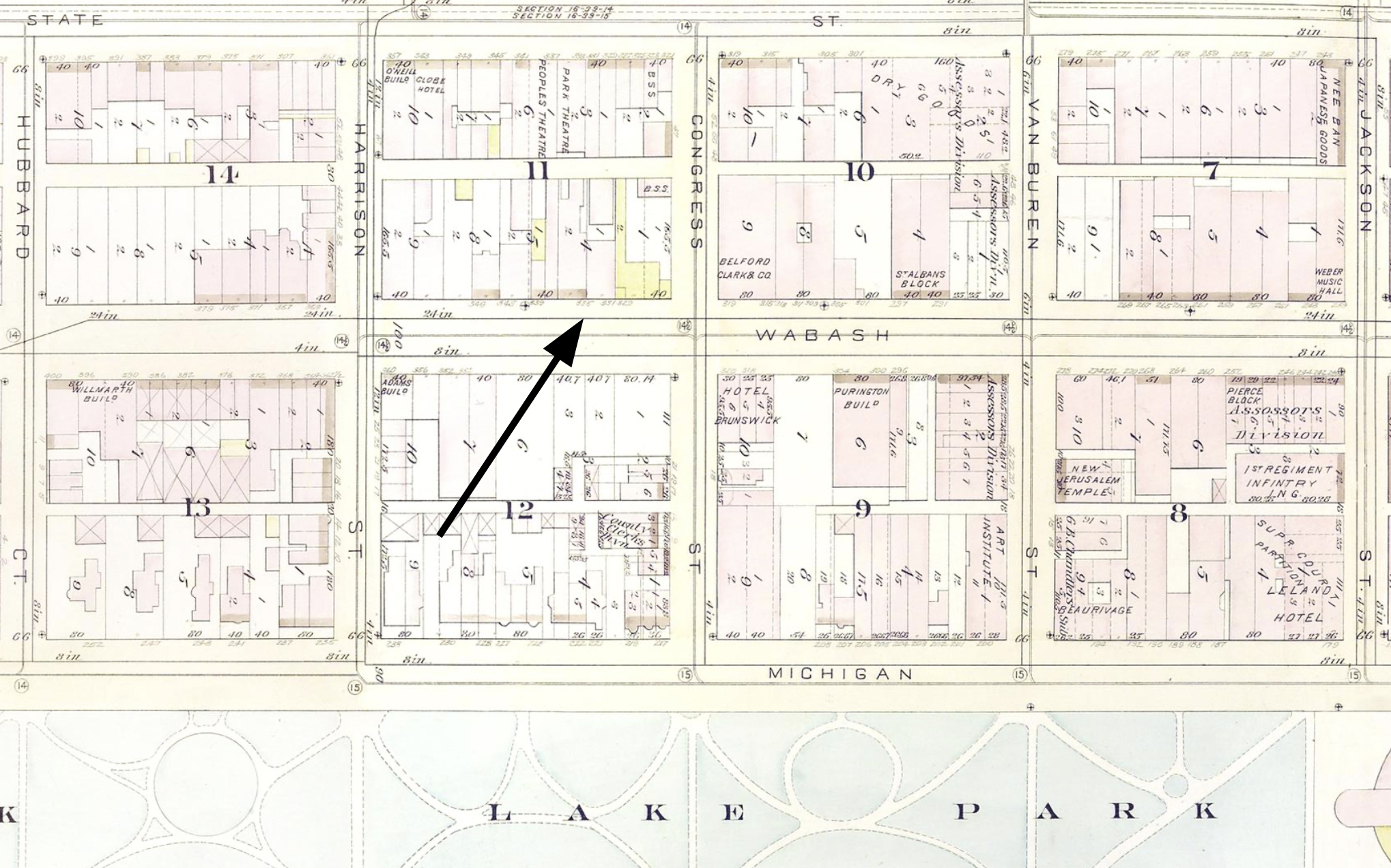 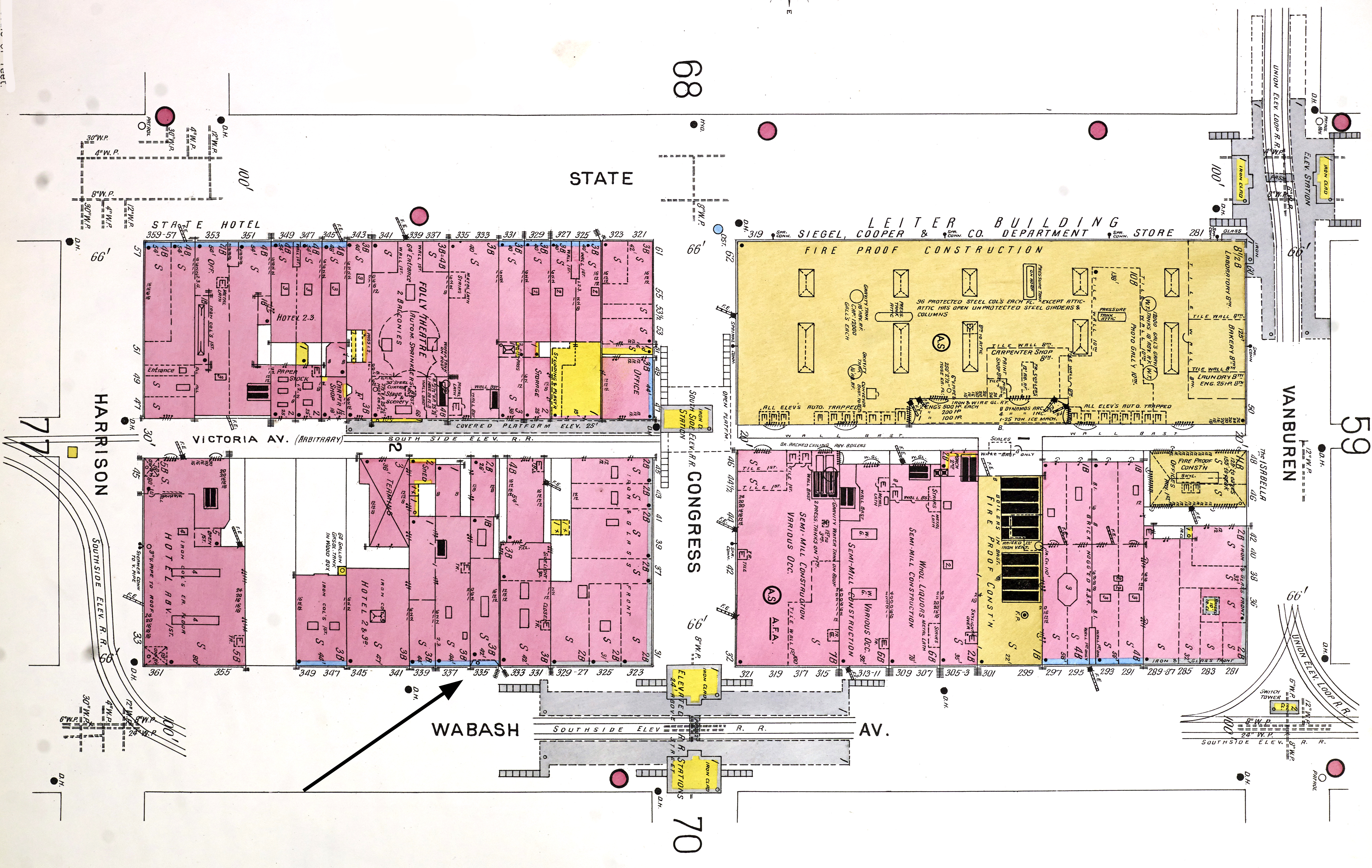