GALBRAITH BLOCK, MADISON AND FRANKLIN STREETS.
Among the many changes brought about by the great fire in this city, perhaps none have been more remarkable in its way than the sudden transformation of the vicinity of Madison, Monroe, Market and Franklin streets into the chief centre of the wholesale trade. Where formerly were only rickety old tenements, or mere wastes of vacant lots, now stand the stately buildings of Field, Leiter & Co., J.V. Farwell & Co., Hamlin, Hale & Co., Henry W. King & Co., C.M. Henderson & Co., and many others known as the largest and leading wholesale houses in Chicago, and the West. Long lines of costly stores and warehouses have suddenly sprung up in place of beggarly wooden fire-traps that formerly cumbered the ground in that quarter.

Of the numerous fine buildings erected during the past year in this portion of the city, that of Wm. A. Galbraith is entitled to rank among the first. Its elegant and tasteful architecture and fine proportions, and the unusual massiveness and strength everywhere apparent in its construction, have attracted much attention and favorable comment. 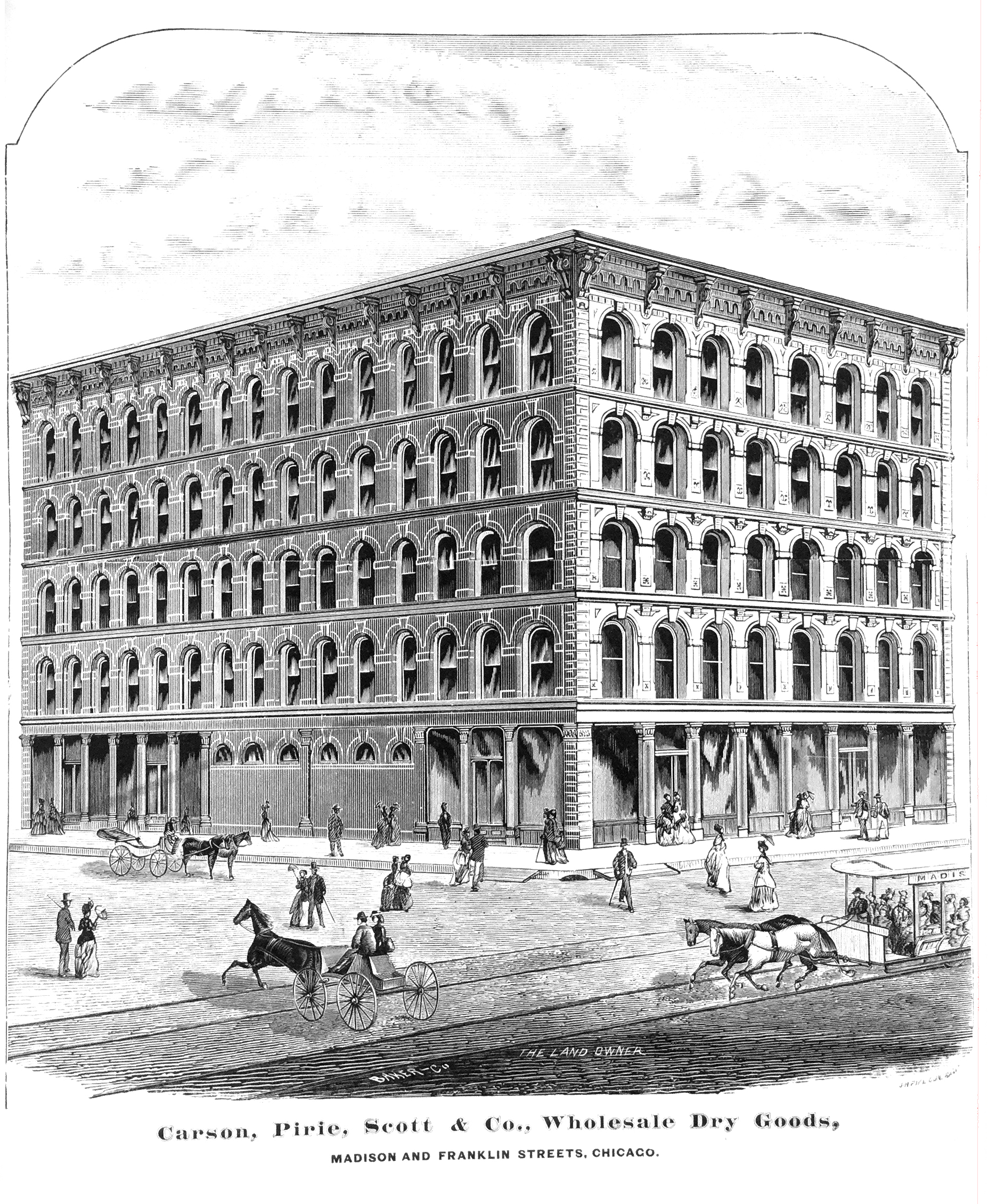 The dimensions are eighty feet ten inches on Madison, by one hundred and thirty-two feet six inches on Franklin street. It has five stories and a basement, the latter extending out and including the space under the sidewalks of both streets. The height from the sidewalk to the top of the cornice, is eighty-seven feet. The font on Madison street is of solid stone from the Amherst quarries, near Cleveland, Ohio. The Franklin street front is Milwaukee pressed brick, with heavy stone trimmings. The cornice is very massive, being nine and a half feet in height above the cut stones stone walls, and projecting five feet. It is constructed of galvanized iron. The building is to be heated with steam throughout, and each of the two stores is furnished with of the latest improved steam elevators. The entire interior finish is to be of hard wood, done in the most complete and costly style.

This building will be, when completed, one of the handsomest and most imposing structures in the city. It is to be ready for occupancy in December. The architects are Messrs. Cochrane & Miller, the architects of the new Board of Trade building.

ALONG MADISON STREET
The wholesale trade of Chicago has many extensive and prominent establishments, but none more favorably known throughout the entire Northwest than Carson. Pirie, Scott & Co. This fine establishment is located on Madison and Franklin streets, and contains within its colossal proportions every article known to the wholesale dry-goode trade.

The fine retail establishment on West Madison and Peoria streets is also owned by this firm. This latter concern is one of the most popular trading resorts in the city, and attracts a large share of the best custom of Chicago. bv its magnificent display and elegance of stock. The Tribune knows of no concern that has done more for the wholesale and retail trade of Chicago than Carson, Pirie. Scott & Co..

Judge Galbraith, of Erie, Pa., leased his building yesterday, located at the corner of Madison and Franklin streets, to Carson, Pirie, Scott & Co., for three years from Jan. 1, 1880. It is rented until that time to M. Selz & Co., and will be occupied by Meyers’ wholesale clothing house. In the meantime the building will be enlarged by an extension to alley fifty-two feet. The block will then be thrown into one store, for the use of Carson, Pirie, Scott & Co. A boot and shoe firm has been negotiating for its purchase lately, but the owner preferred to lease it. The sum paid is $19,200 per annum. It will be used for the wholesale branch of their business. This movement shows which way the wind is blowing as to locations for wholesale houses, property in that vicinity being in great demand for that purpose. The price is somewhat lower than paid by the present lessees, but Mr. Galbraith preferred to rent to a house of that standing at a trifle less than others who would have promised a little more. The last lease was at $24,000 a year. The present price pays a good per cent upon the investment, as, in fact, does all the best property in Chicago, in spite of the hard times. The Judge says that the wiseacres are crying down Chicago, but wise men are investing their money here. 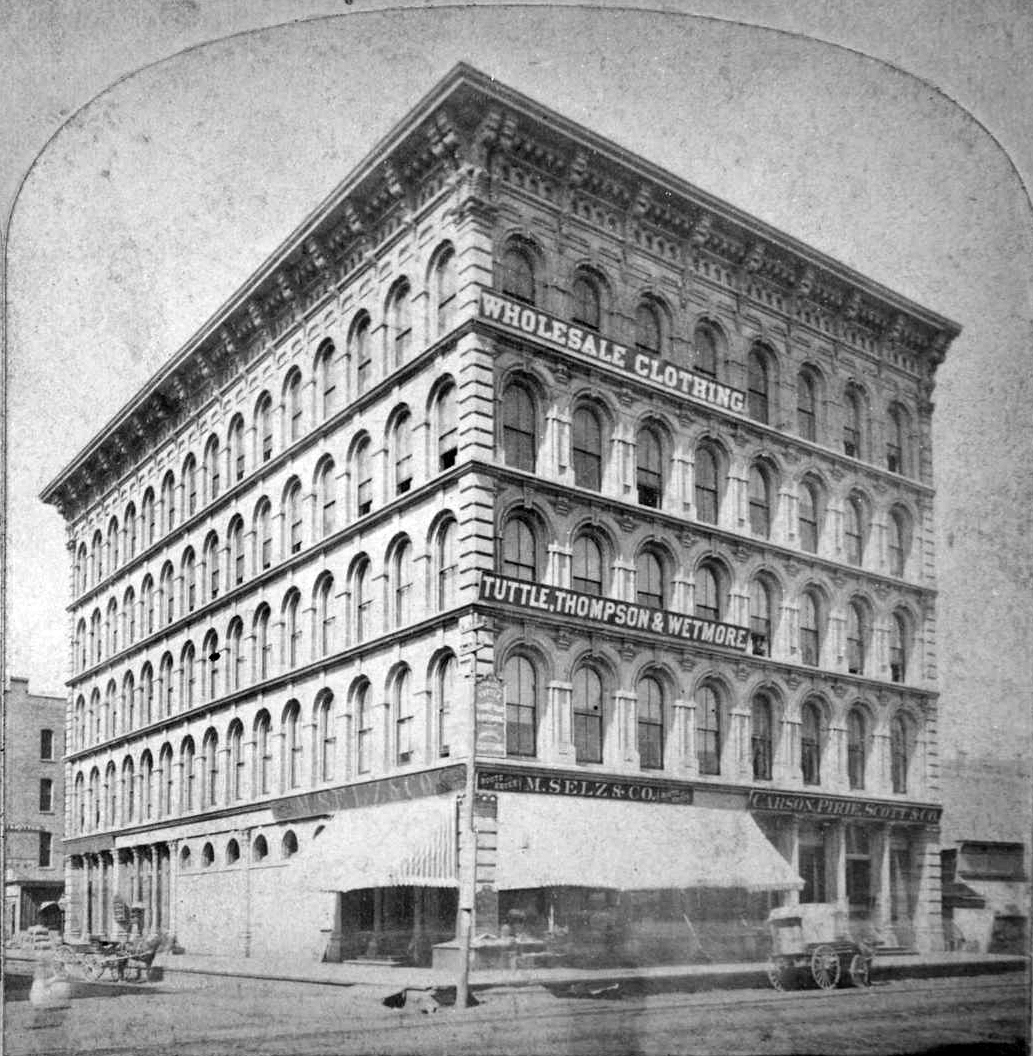 Carson, Pirie, Scott & Co.—This is one of the great wholesale dry goods houses of Chicago. During the first week in July last it transferred its immense stock and belongings to its new store on the corner of Adams and Franklin Streets from the corner of Madison and Franklin which they had so long occupied. While the distance is only about two blocks yet it required more than 100 large trucks working three days, and with an army of assistants to effect the transfer. Not withstanding the gigantic labor involved in this removal the house had everything in place ready fur business by July 6th. The new store has more than 50,000 square feet larger floor space than their old premises, and is in the very heart of the wholesale district. It is said that there is only one dry goods house west of the Alleghanies, and two in the entire country which does as large a business, or which employs as large an active capital.

The volume of business for 1891 exceeded in round numbers $l6,000,000. It maintains expert buyers in the great continental cities of Europe to gather the finest novelties that genius can produce. They have also accorded a generous support to domestic manufacturers, provided always that the quality of the goods would warrant it. They employ about 2,000 hands in their several departments, a majority of whom have been with the house for a great number of years. Carson, Pirie, Scott & Co. are pressing their largest rivals so closely for the supremacy of the trade, that they have won for themselves the most generous recognition of the entire trade. Chicago has made giant strides in commerce and manufacturing in the last few years, a large share of which has been due to the energy, foresight and self-confidence of her pioneer merchants, among whom are Carson, Pirie, Scott & Co.

Fronts 100 feet on Madison and 200 feet on Franklin Street, at the northeast corner. It is 80 feet high, with 6 stories and basement. It was remodeled in 1892, and is a stone-front of 1873. It has 6 stores and 2 elevators. The tenants are wholesale jobbers and manufacturers’ agents. 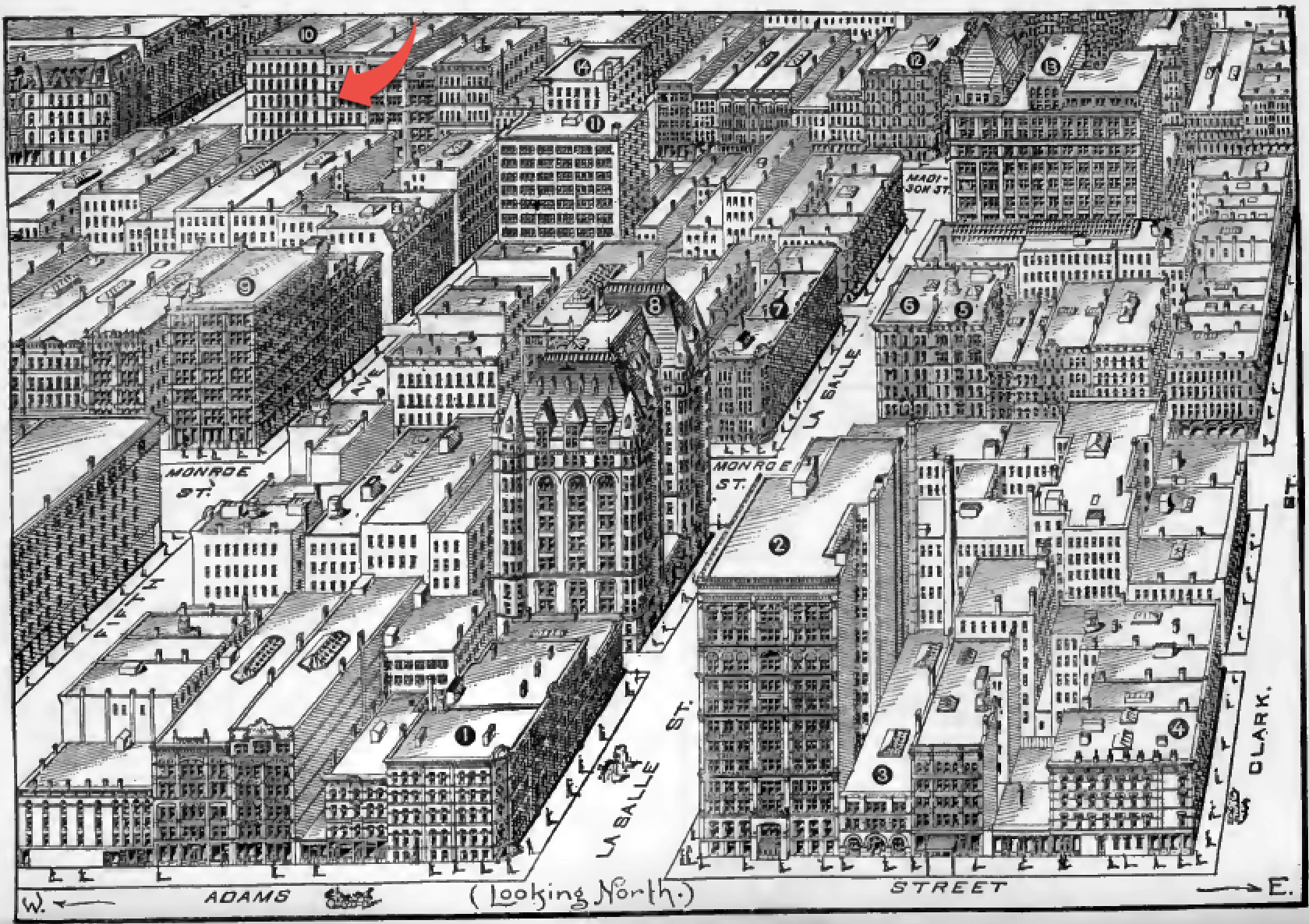 CARSON, PIRIE, SCOTT & CO.
We present our readers on this page with a cut of the large wholesale dry goods house of Carson, Pirie, Scott & Co., Madison and Franklin streets. This firm is well and favorably known throughout the entire West as honorable, reliable, enterprising, and energetic merchants. There are a few if any houses in this country or Europe who carry so large and well assorted stocks in every department as they do. In looking through their numerous departments this week we found them quite busy opening new importations in laces, embroideries, hosiery, linens, white goods, etc. As they purchase these goods in large quantities for cash from manufacturers, buyers can rely on getting the best values from them to be had anywhere in this country. 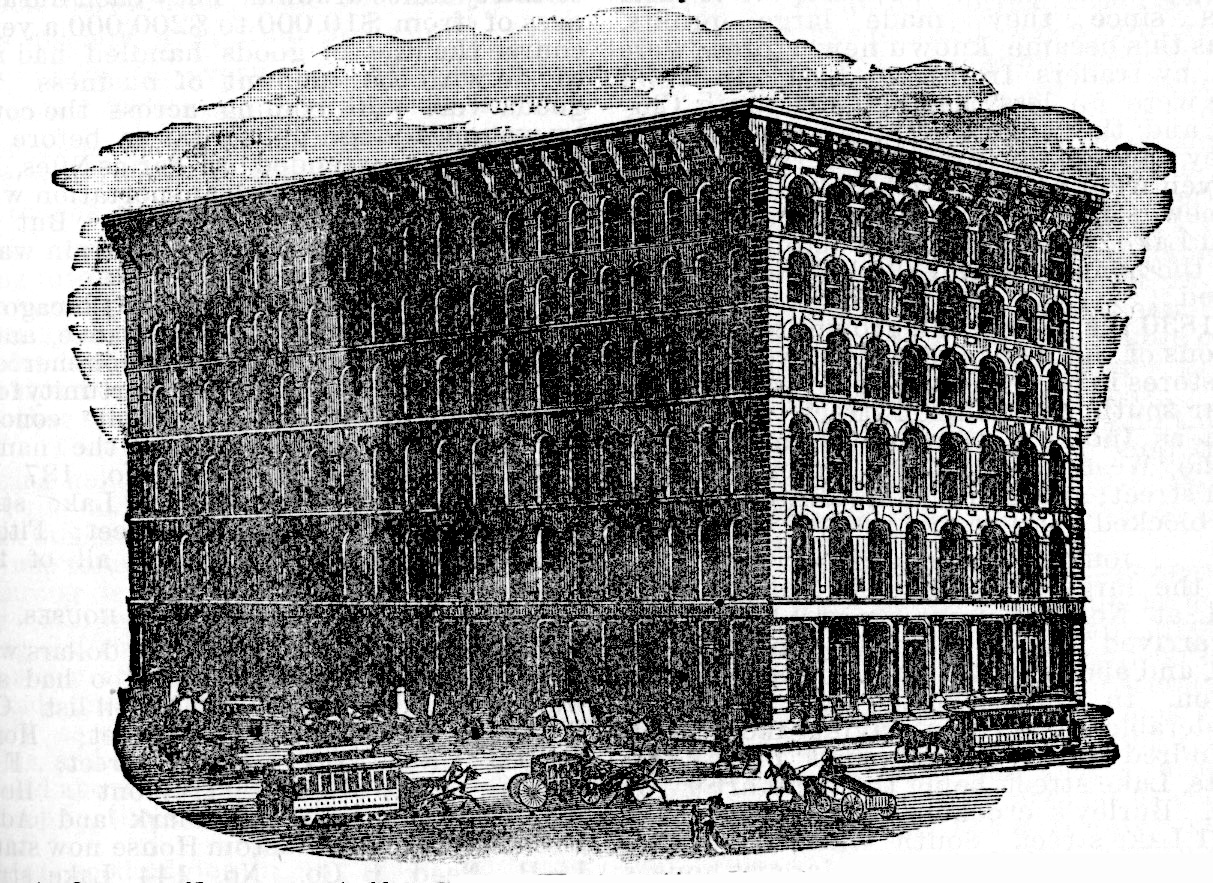 Two more loop buildings are being razed to provide parking space. They are the six-story Galbraith and Haverford buildings at the northeast corner of Madison and Franklin streets, belonging to the Leander McCormick estate. 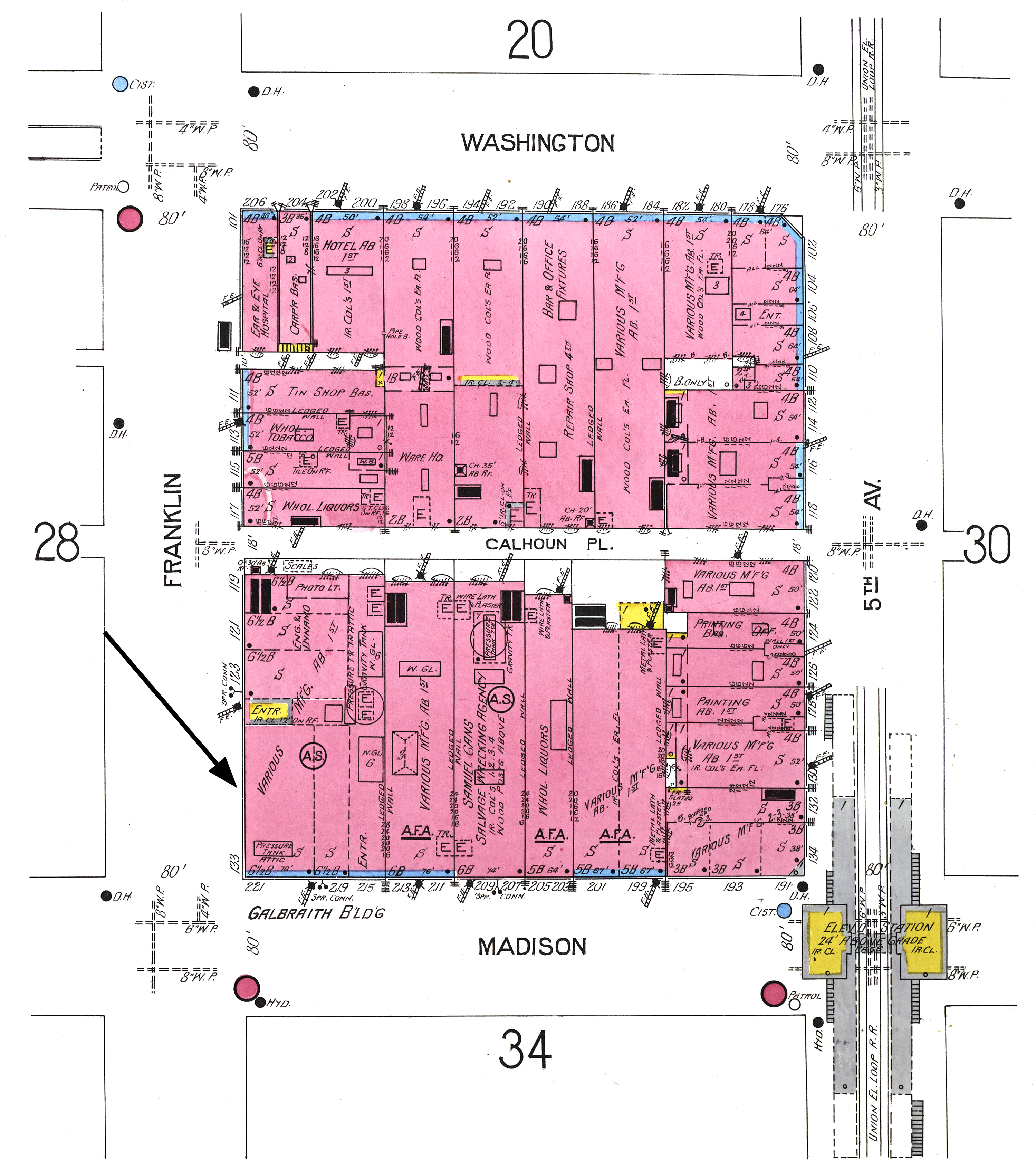