THE HISTORICAL SOCIETY.
A Building To Be Erected.
There seems at least a fair prospect that the Chicago Historical Society, an institution which, in common with so many others, went down in the universal wreck of October, 1871, is about to resume its career of usefulness. The United States have been making history so rapidly during the last quarter of a century that the necessity of conserving the facts and data for the historian who is to come hereafter has too often been overlooked. This deficiency it is the province of such associations as the one mentioned to furnish, and an omission to provide for the future in this regard would be a public calamity.

A meeting of the Executive Committee was held yesterday afternoon at the Tremont House. There were present Isaac N. Arnold (Chairman), George L. Dunlap, Mark Skinner, George T. Rumsey, and B. L. Sheldon. After general discussion it was decided to begin at once with the construction of a building for the purpose of holding the collections which the Society has already in its possession.

There was submitted to the meeting some elevations of a grand building, drawn by Whitehouse, which, from their attractive appearance, met with the general approval of the Committee. The lot belonging to the Society on the northwest corner of Dearborn and Ontario streets is a very large one, being about 120 by 132 feet, and it is not proposed at the present moment to erect the entire building, which shall cover it all.

It will be remembered that the old structure before the fire occupied only a portion of the lot: and the one which is now to be erected will occupy even less space than that one did. It is proposed to erect at once, on the northeastern corner, thus fronting on Dearborn street, a building which shall be 70 feet in depth, standing back forty feet from the lot line, in order that, when the permanent structure, which is to cover the whole space, is erected, there will be no difficulty about uniting the two together. On the right hand, as one enters this building, there will be a Secretary’s room, 8 by 16 feet, and adjoining it a vault, 6 by 14 feet. On the left hand side will be a Directors’ room, 16 by 16, and back of these smaller rooms will be one 40 by 50 feet, with a gallery 9 feet high. Around the sides of this room will be put book-cases for the purpose of holing the collections. They will at first be placed against the wall, but as they fill up they will be put back to back, thus forming alcoves. This hall will be big enough for the accommodation of meetings which are too large to be held in the Directors’ room. Underneath this structure will be an eight foot basement. The cost of the nucleus of the future building will be about $5,000.

In addition to approving the plans, A. D. Hogan, formerly State Geologist of Vermont, and later of Missouri, was elected Secretary and Librarian. Mr. Sol Smith has already been chosen Treasurer.

At the meeting over half the money required for the erection of the building was subscribed, and it is certain that there will be no difficulty about securing the remainder. The building is to be finished by the 1st of September at the latest.

The Society, in addition to its large and valuable lot, will shortly come into possession of what is known as the Gilpin bequest. This amounts to between $50,000 and $60,000, and was devised by Mr. Gilpin, of Philadelphia, a former Attorney- General of the United States, for the establishment of a library in Chicago, under the management of the Historical Society.

The scope of the new organization is broader than that of the old one. It will gather in not only the books and manuscripts relating to the early history of Illinois and the Northwest, but also all archeological specimens which it may be able to obtain. Many have already turned over to the Society, and, as soon as the buildings are in shape to receive them, many more are promised. It is to be hoped that citizens generally will appreciate the efforts of the Society and come forward to its support. It is fortunate in having received the services of as competent a Librarian ad Secretary as Prof. Hagar. 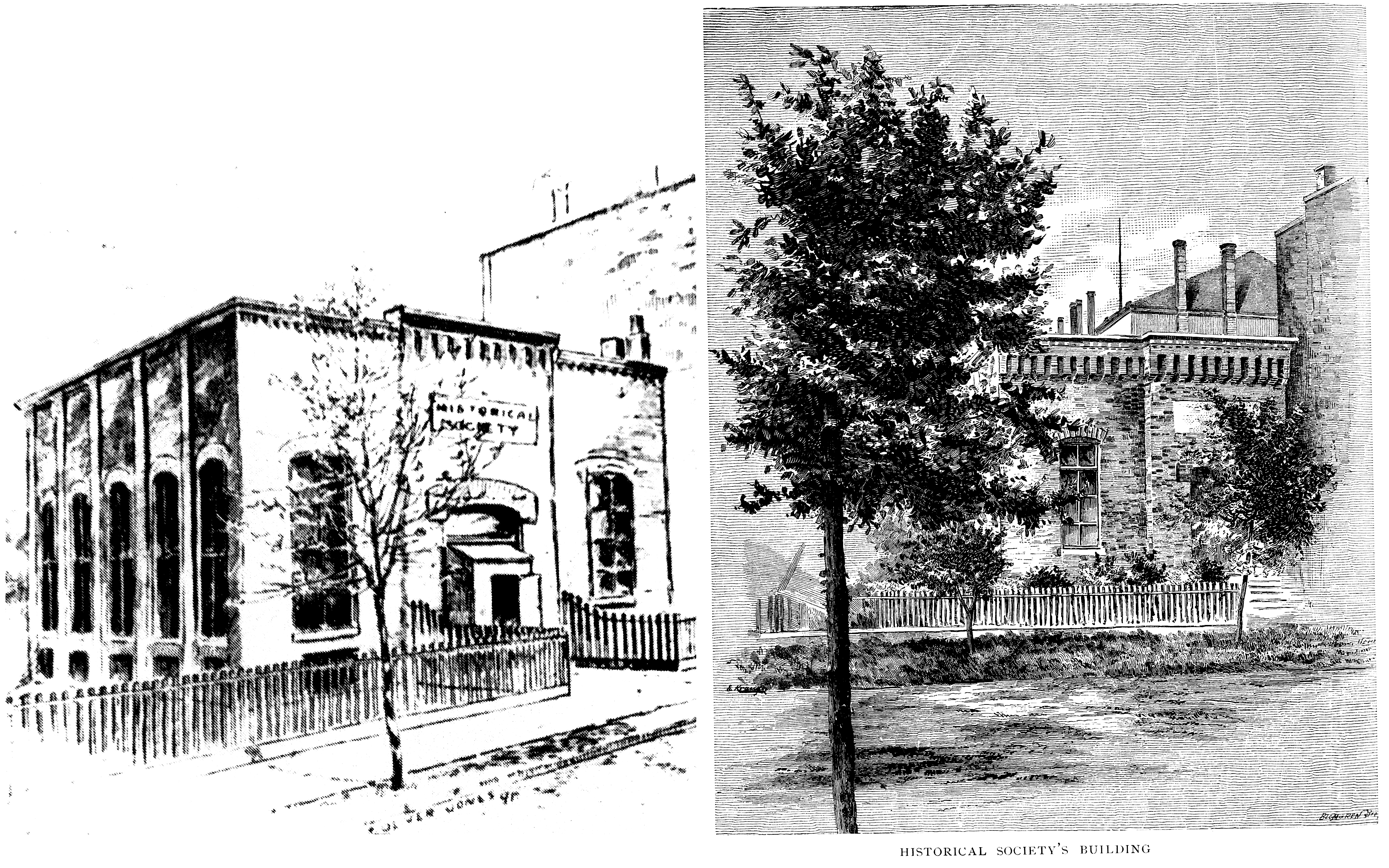 HISTORICAL SOCIETY
Plans For the Future Building.
In the account of the meeting of the Executive Committee of the Historical Society, published in The Tribune the other day, it was stated that the Committee had decided to commence in a short time the erection of a temporary building, 40×70 feet. This structure, while denominated “temporary,” will be in reality be the rear end of the north wing of the building of the future, the only thing necessary to make the connection between the two being the knocking-out of the wall facing Dearborn street. The cost of the nucleus will be about $7,000; that of the whole edifice somewhere in the neighborhood of $120,000. The plans for both have been drawn by Mr. F. M. Whitehouse, with Burling & Adler, and the Committee, has accepted them. Work on the “temporary” building will be commenced on the 1st prox., and it will be completed within ninety days. When the erection of the main structure will be begun is as yet uncertain, since the money needed will not be available until the Gilpin bequest is paid to the Society. The Committee, however, though there has has been next to nothing said about it, will probably anticipate these funds, and borrow money and erect the Gilpin section as soon as possible. This part, which will be distinct from the other, being separated from it by iron doors so as to make it “fire-proof,” will have a frontage on Ontario street of 103 feet, and on Dearborn street of thirty-seven feet. The remainder—eighty-three feet—on the latter thoroughfare, making the frontage 120 feet, will be paid for out of the Society’s other funds. 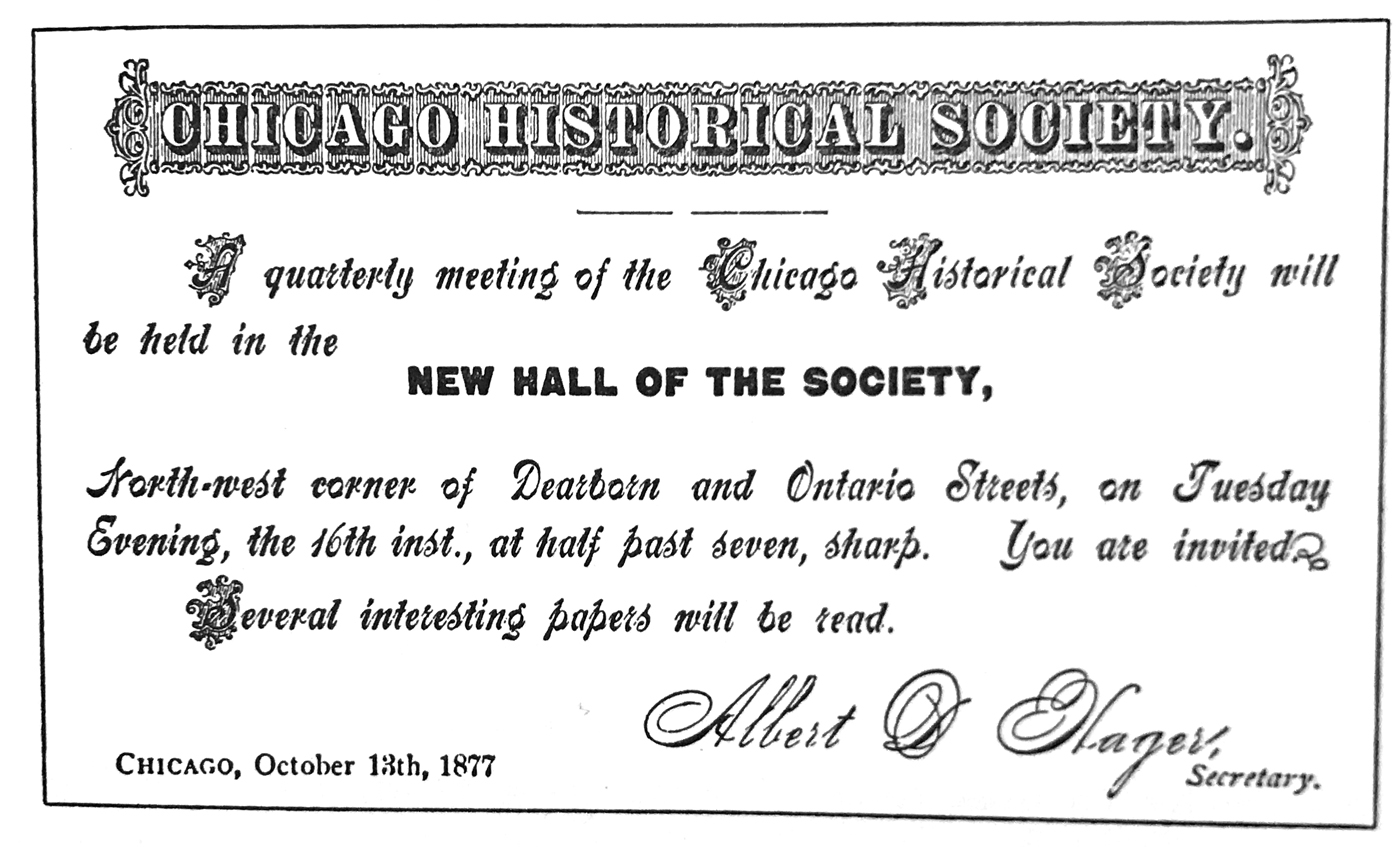 The edifice when completed will be three stories in height, with an ornamented Mansard roof. The exterior will be composite Gothic or a rather ornate style, constructed of brick with red sandstone trimmings, and an introduction of tile. On the corner will be a tower seventy-feet high. The entrance on Dearborn street—one is also contemplated on Ontario street, but its location has not yet been agreed upon—will be of quite a new character, being a projection octagon in form with a groined gable into a tower, finished with a cresting, extending about twenty-five feet above the roof.

The first-story windows will be in groups with depressed arch tops; those in the second story will be Gothic, of considerable size, in groups; and those above the same, with detached columns between.

The Gilpin department, or section, will embrace the library, reading, Directors’, and Secretary’s rooms, and a large lecture hall 37x??? feet, with a trussed-roof ceiling thirty-feet high. The books, etc., purchased by the Gilpin Fund will be kept in this part; and there will be commodious vaults for the storing of valuable articles.

The other, or north section, will also have reading-rooms, magazine-rooms, and lecture-halls; and theb third floor will be used for storing and arranging specimens.

It If the present designs are used the edifice will be an ornament to the North Side, and one of the prettiest buildings in the city. It is hoped, therefore, that the Committee will conclude to begin its construction as soon as possible.

The Chicago Historical Society have rented and elegantly fitted up a number of rooms in Ashland Block. The society has also vaults for the safe keeping of valuable and scarce historical documents.

A contract for building new rooms for the Chicago Historical Society has been awarded to John McEwen, who will at once commence the work, which is to be finished in season for the annual meeting, which is to be held on the third Tuesday in November, The expense of the building, which will occupy the site of the one destroyed by the fire in 1871, will be defrayed by a voluntary contribution which has been made by several leading public-spirited citizens, and by the annual assessment of the members of the Society. 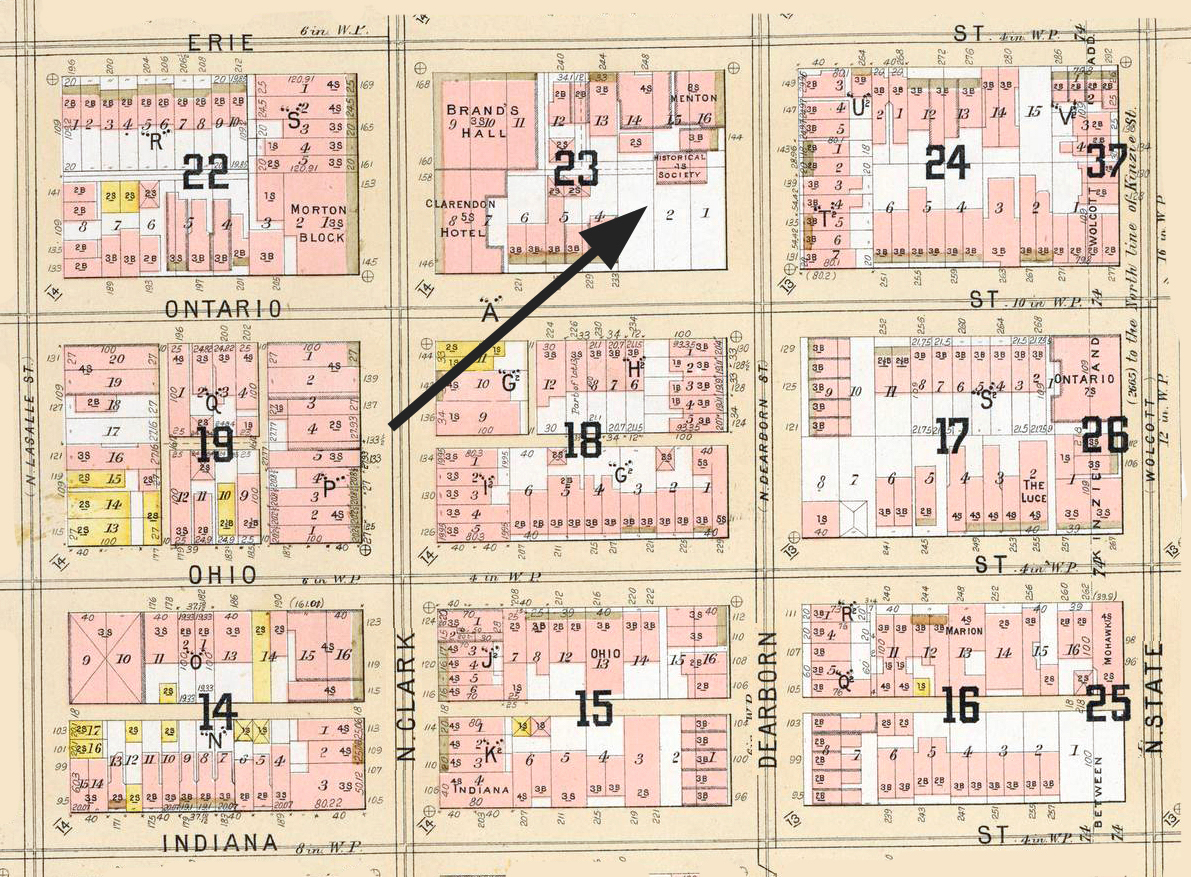