This building was an exact rebuild of the Drake and Farwell Block II.

The “My Block,” of N.P. Wilder, on Washington street, adjoining that of John B. Drake, is a six story palace just finished. The Drake building is partially occupied. The numbers 1870, 1871, 1872, on its front are significant of the sad past.

Railroad Offices.
Our railroad companies are beginning to take for themselves their quarters of their own commensurate with the metropolitan character of the city. It is said the Michigan Central and Pullman Palace Car Company are to lease for entire occupancy, the magnificent five story marble building on Washington street, east of Wabash avenue, that bears “My Block” cut in enduring stone on it facade, understood pretty correctly to beling to N.P. Wilder, Esq.

The new Drake Block is a six-story and basement structure, constructed of Athens limestone in the Italian school of architecture. It is 81 feet front by 120 in depth. The first story is all in one room, designed for a mammoth store. This story is all of cast iron and plate glass, while those above are stone. 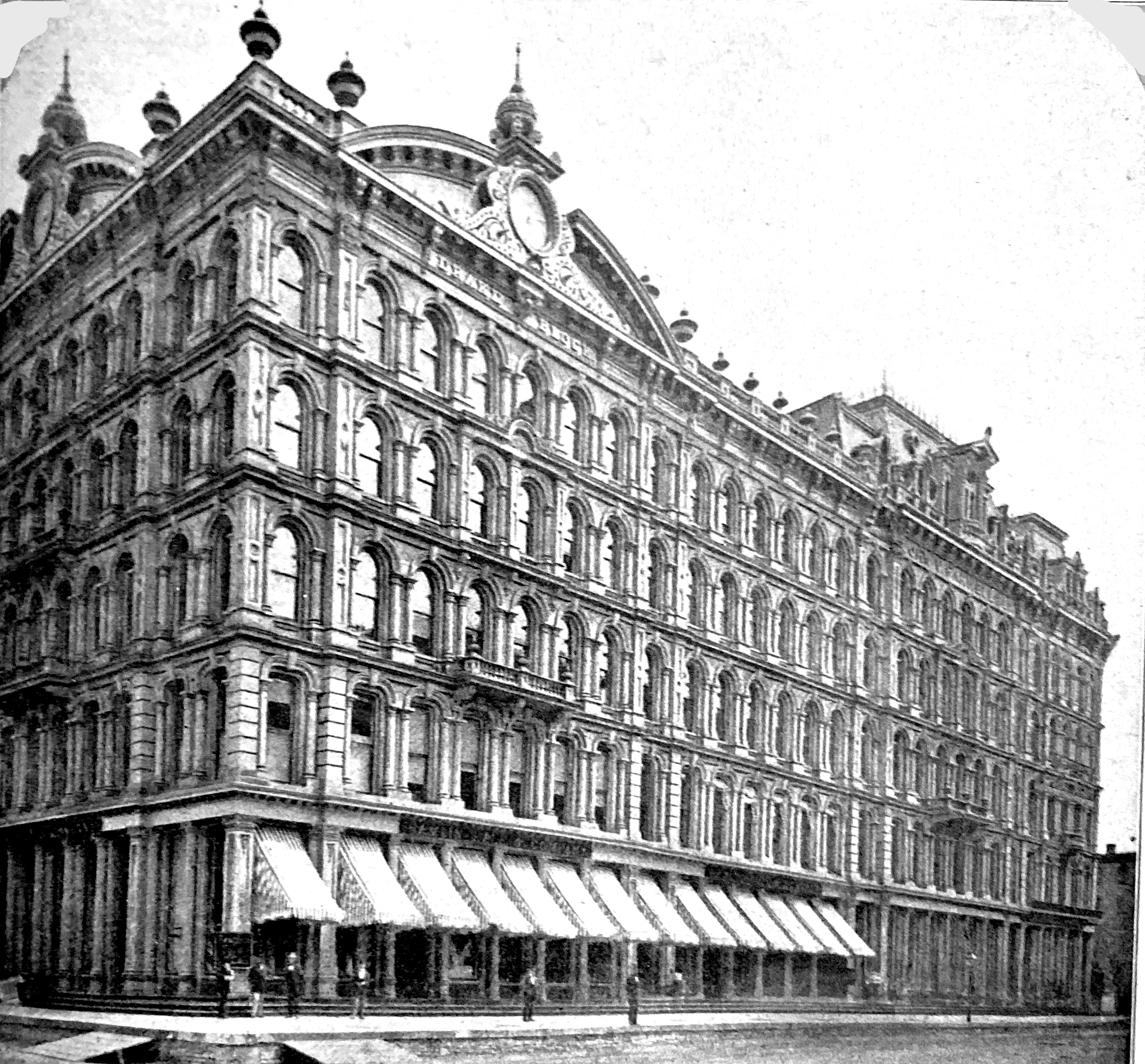 The Lease of “My Block.”
The Tobey Furniture has rented for five years the “My Block” building, which was put up by N.P. Wilder. They are now adding two stories to the premises they now occupy and will take immediate possession of the Wilder Building. The way in which the “My Block” building got its name is interesting. The owners of a great many of the buildings that were put up just after the took the opportunity of handing their names down to the future by having them emblazoned on their lintels. Mr. Wilder did not approve of this bit of conceit, and when he put up his building he lampooned the custom by putting over the doorway the inscription “My Block.”

Mr. Shorey reported on behalf of the Committee on Buildings and Grounds, that the second and third floors of Wilder’s Building, on Washington street, between Wabash and Michigan avenues, were the only desirable quarters available for use for the Library, and that they could be had for a rental of $5,000 per year until April 30, 1875, with the option of continuance of the lease for the three following years at the rate of $7,500 per year. On motion of Mr. Shorey, the report was accepted and concurred in, and the President of the Board was authorized to make a contract with Mr. N.P. Wilder, the owner of the building, on the above terms. The building is furnished with a separate boiler for heating, and Mr. Wilder is to put in the heating apparatus; the Library is also to have the separate use of an elevator.

THE TOBEY FURNITURE CO.
Without question the World’s Fair city possesses. in the vast establishment at the southeast corner of Wabash avenue and Washington street, the largest retail furniture emporium in America. Of course reference can only be made to the Tobey Furniture Company, which yesterday inaugurated a noble addition to its already immense establishment, the enlargement being effected by annexing to the Drake Building the even larger “My Block,” on the west. With the Columbian Exposition on the Lake Front, this huge emporium just at hand, will be not the least important adjunct of the fair. 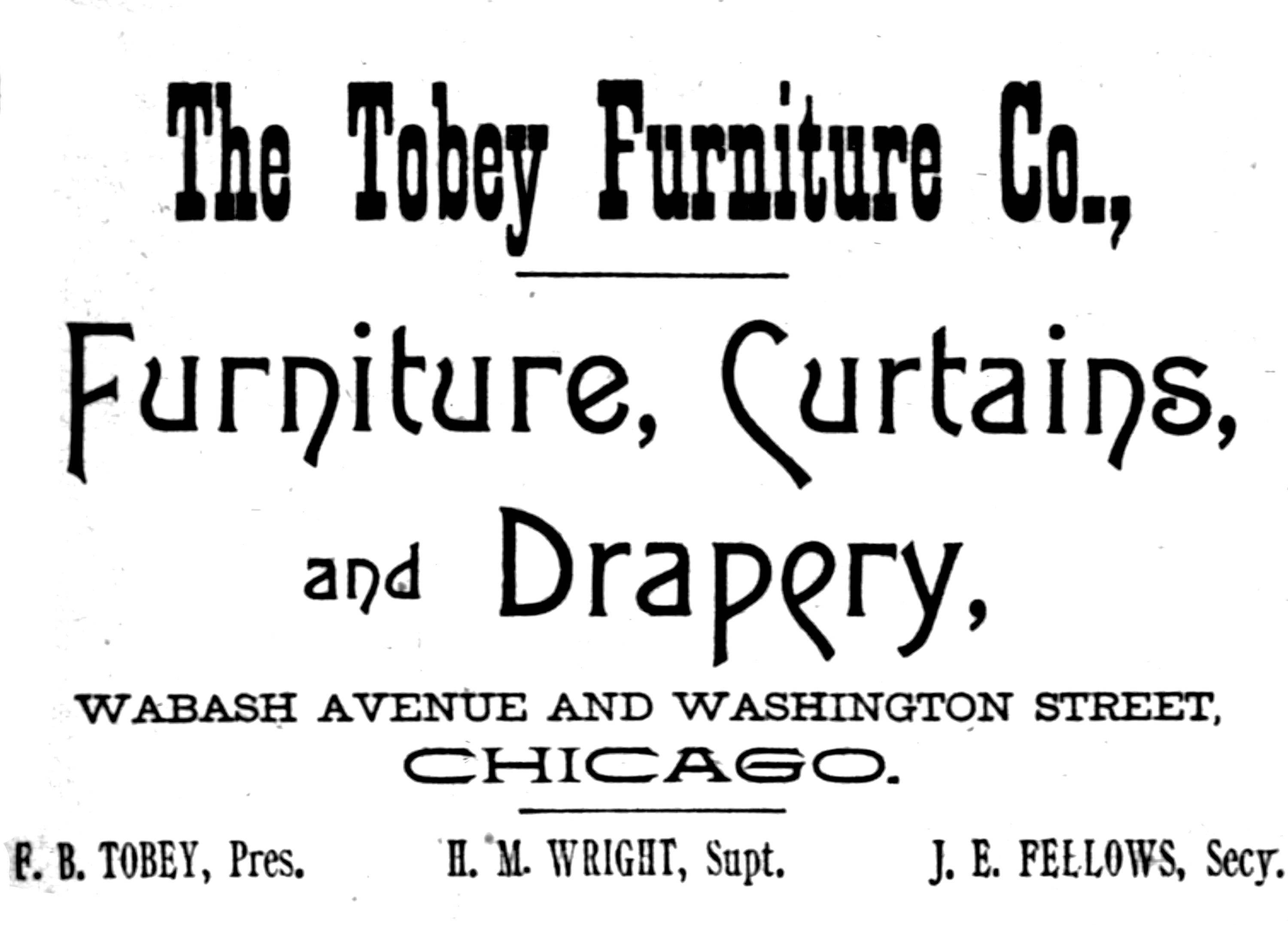 Last March the company shipped furniture to twenty-nine different States, and one bill of goods to London, England. When first established, thirty years ago, they had to go East twice a year, but now the Eastern dealers come to Chicago and Grand Rapids, whose goods are sold everywhere on the seaboard. and Chicago is recognized as the great center of the furniture trade, and the Tobey Company its special representation, its only difficulty being to enlarge its facilities fast enough to meet the demand. The company’s best goods are manufactured right here on the West Side, and its employes are legion, as may be inferred from the fact that often sixty car-loads of furniture are shipped a day. Designs of furniture are changed twice a year, Jan. 1 and July 1.

A tour of the seven-story structure, reaching away almost half a block in each direction and requiring even additional space in the lower regions, is a revelation of astonishment. In the basement everything is received on one side and shipped on the other, there being accommodations to load twelve teams at a time. There are four elevators, so that goods arriving for storage are at once assigned to their respective floors and heaped upon them to the ceiling. The main salesroom comprises the entire acreage of the first floor, and higher up are art rooms and boudoirs, equipped wit a wealth of furniture, polished, carved and upholstered, for a king, and divans and ottomans, decked out with damascene looms and Gobelin tapestries, for his queen. 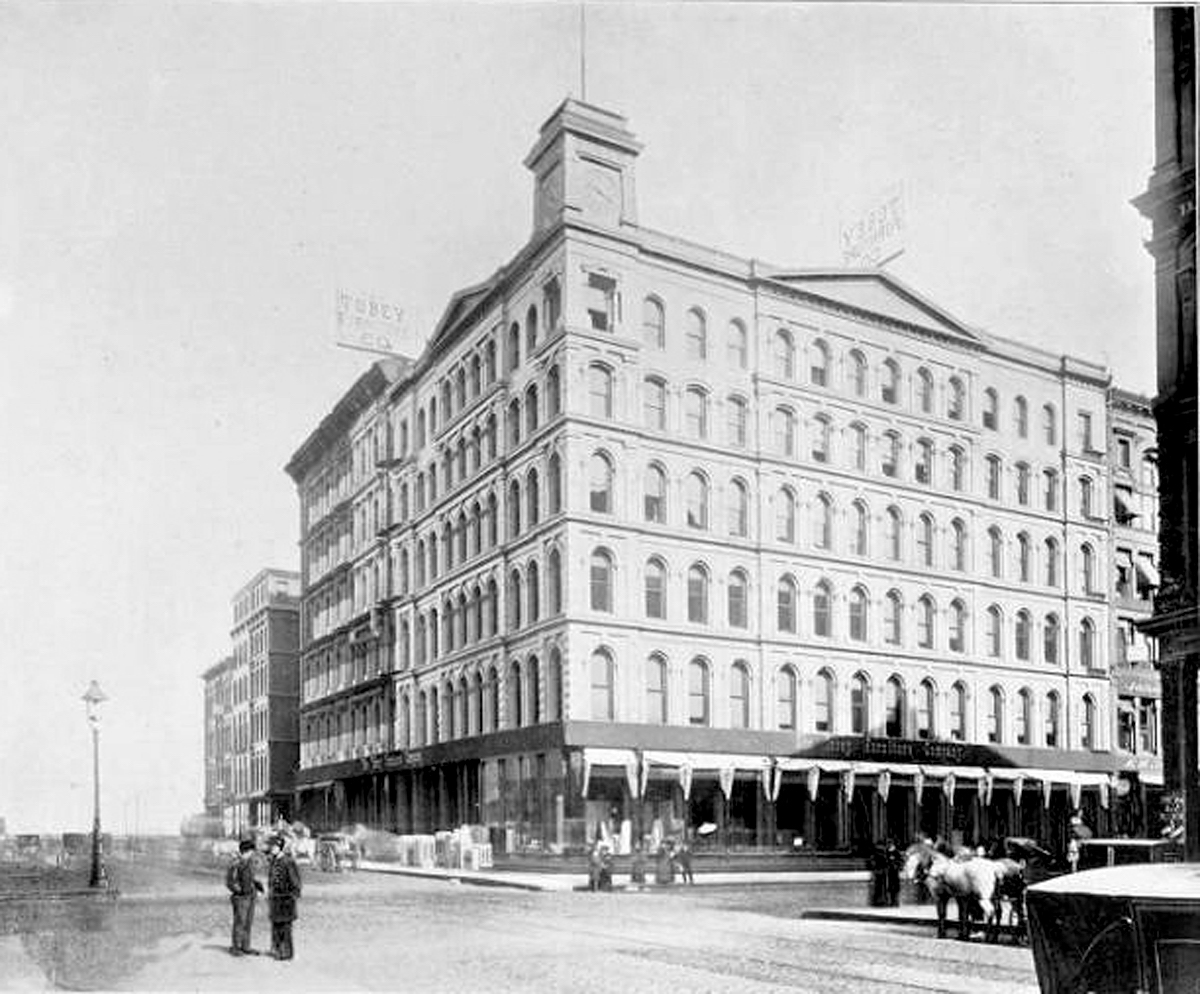 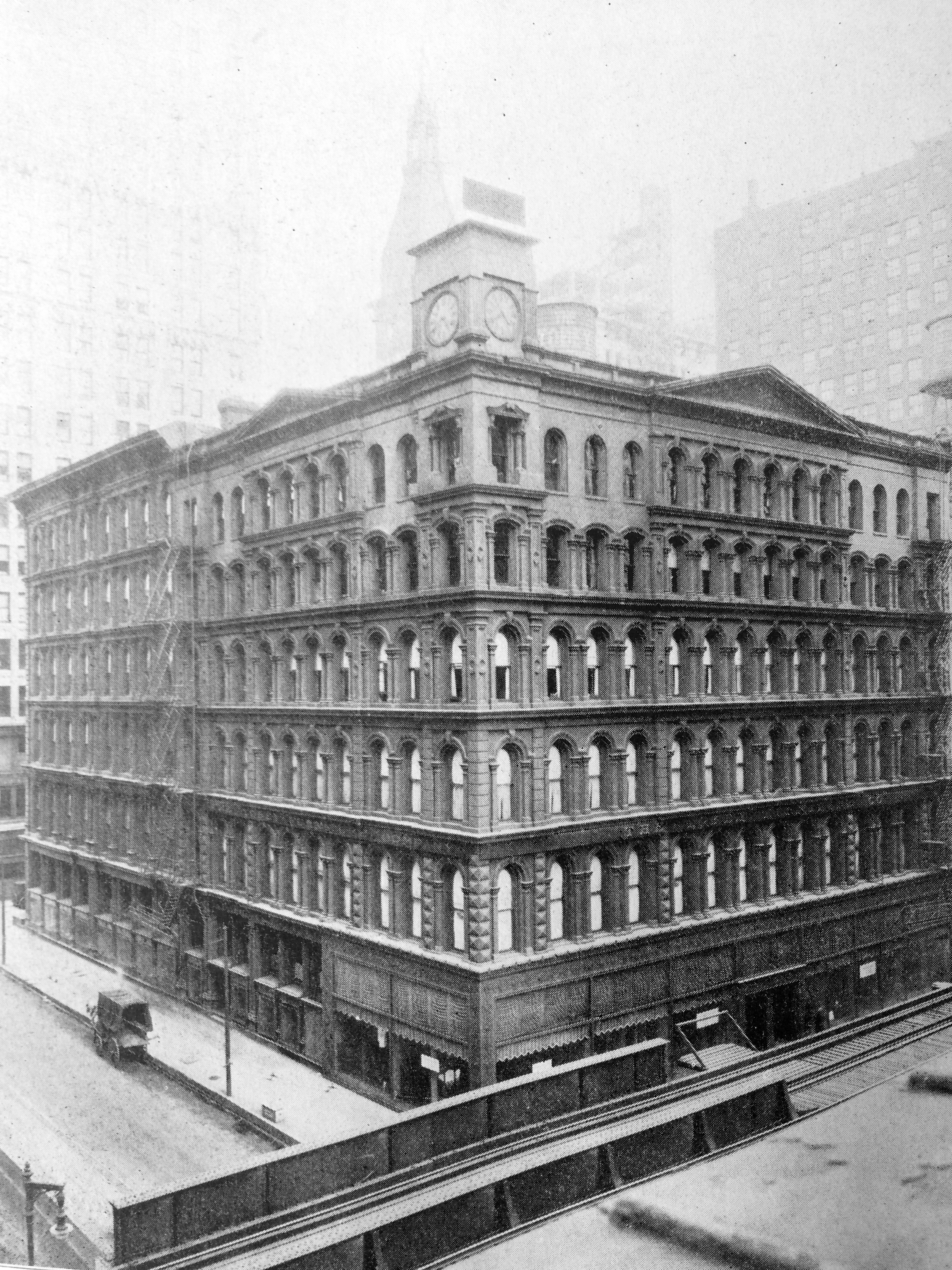 Tobey Furniture occupied the Drake Block from 1886-1926. The building was torn down in 1927 to make room for the Pittsfield Building. 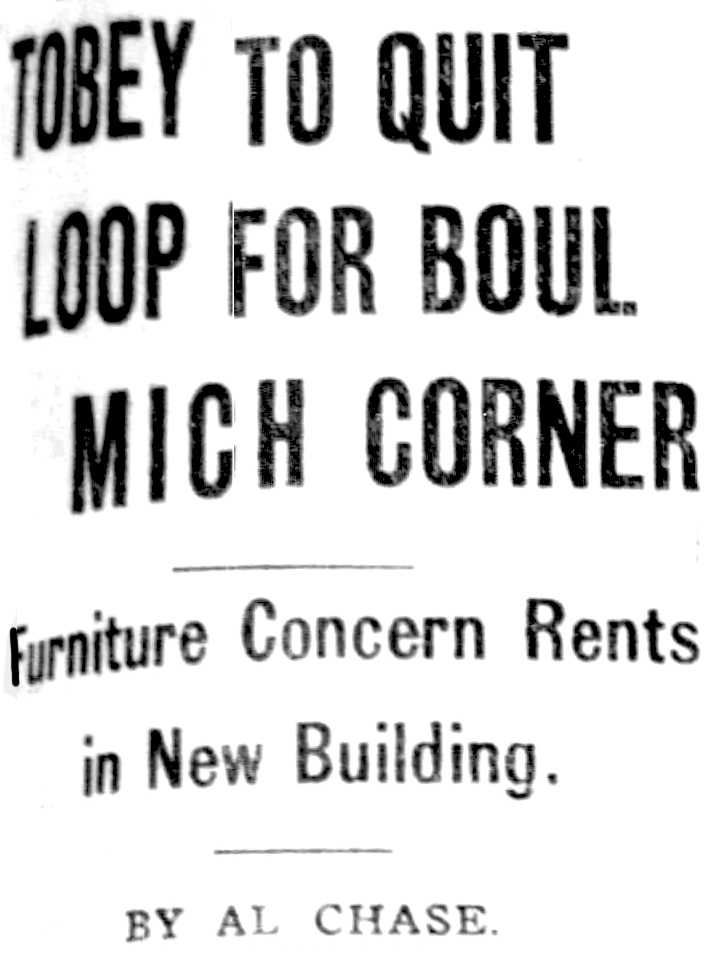 One of Chicago’s oldest concerns, the Tobey Furniture company, established in 1856, is going to forsake the southeast corner of Wabash and Washington, where it has been for thirty-seven years, for Boul Mich. It was announced last night that it had leased considerable space in the six story building to be erected at the northwest corner of Lake and Michigan by the McCormick estates of which Judson F. Stone is agent.

The Ovington Brothers Company of New York has leased much of the balance of the space for a gift shop. The rental to be paid by Tobey and Ovington will total will total $3,900,000 for the term, and in one instance the owners of the building will share i the profits.

Field Estate May Build.
With the announcement that Tobey will quit Wabash comes a revival of the rumor that Marshall Field & Co, will go ahead with a contemplated furniture store of its own on on that corner. James Simpson, president of Marshall Field & Co., said that although such a move was once contemplated, it had been given up. He said he thought it possible that the Field estate, owner of the corner, might some time erect a skyscraper shop and office building.

The new McCormick estates building at Michigan and Lake was designed by Holabird & Roche and will front 166 feet on the boulevard and 130 feet on Lake. It also will have a frontage of 166 feet on Garland court, to be widened later.

Started on State Street.
The Tobey Furniture company was started in a small store on State street, near Van Buren, by Charles Tobey in 1856. A year later he was joined by his brother, Frank B. Tobey.

In 1862 they moved to Lake street, near Dearborn, opposite the Tremont hotel, then the center of the retail district. In 1865 they excited adverse criticism by moving out of the established retail center to the middle of the block on State, between Randolph and Washington, where the Field store now is.

Back on Lake.
After the fire of 1871 they established themselves at the northeast corner of State and Adams and remained there until 1888, when they moved to their present location at Wabash and Washington. Now, after a cycle of sixty years, they will be back on Lake, though it took Boul Mich to accomplish it.

Charles Tobey died in 1888 and Frank B. in 1913. George F. Clingman, manager, came with the company in 1888 and A.F. Shiverick, president, a nephew of the founders, i 1890. Two of the third generation of Tobey descendants are now active in the management of the business.

Albert H. Wetten & Co. were brokers for the Tobey company and Winston & Co. for Ovington. 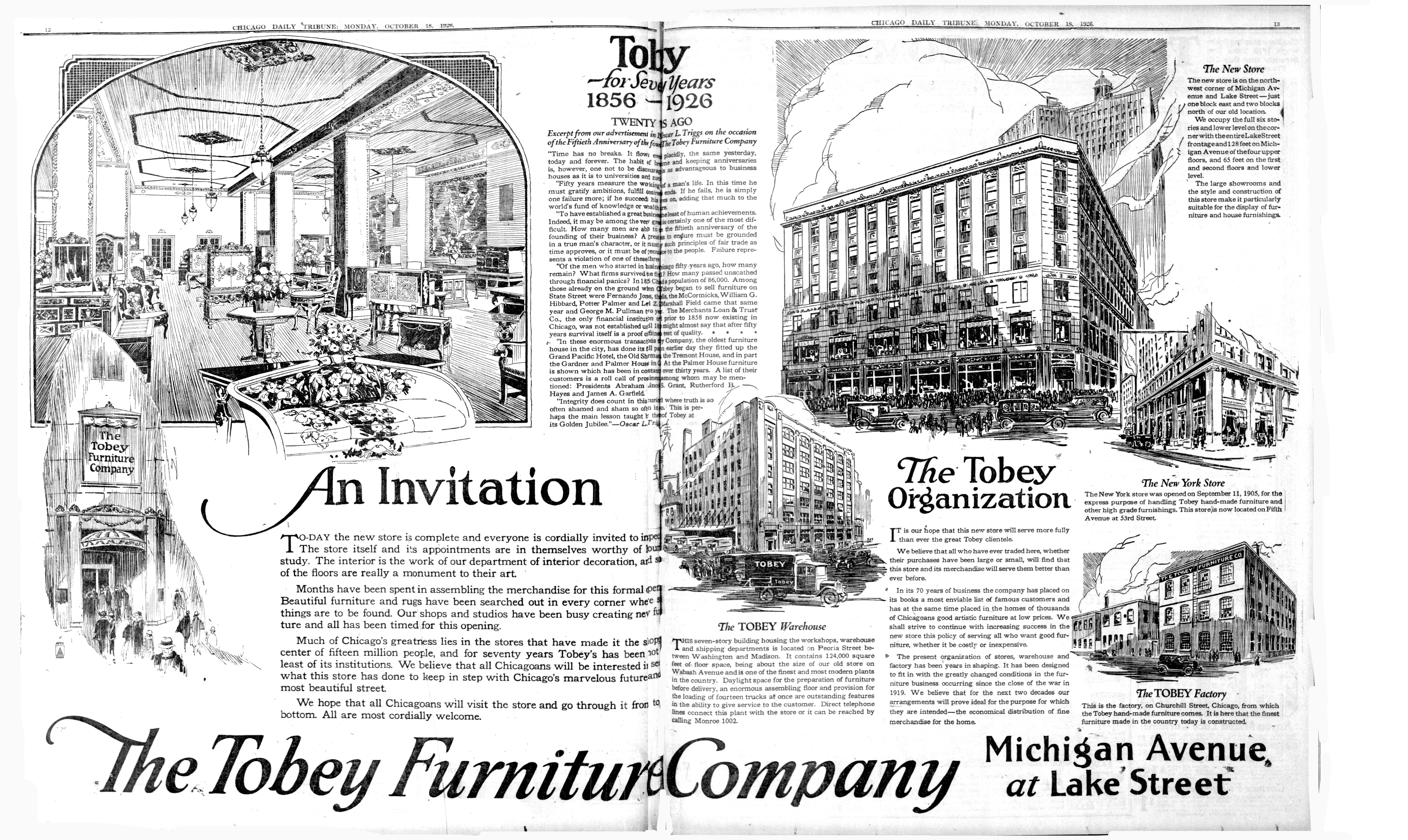 BREAK RECORD IN PUTTING UP PITTSFIELD BLDG.
All records appear to hve been broken in the construction of the Pittsfield building at the southeast corner of Wabash abd Washington. Work started on on the foundations for this thirty-eight story structure on Nov. 1, 1926, and eleven months later, Oct. 1, 1927, it was ready for tenants. 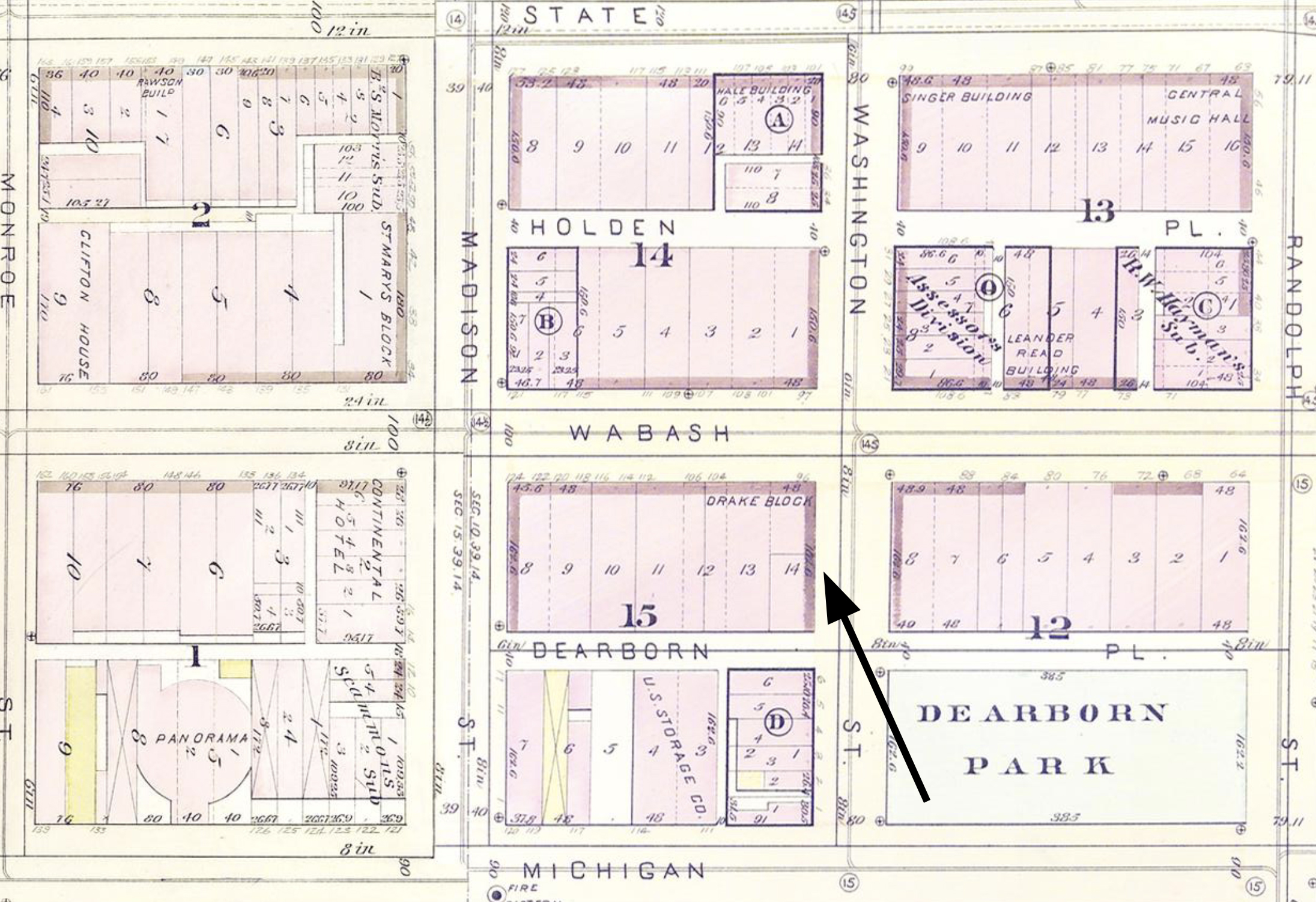 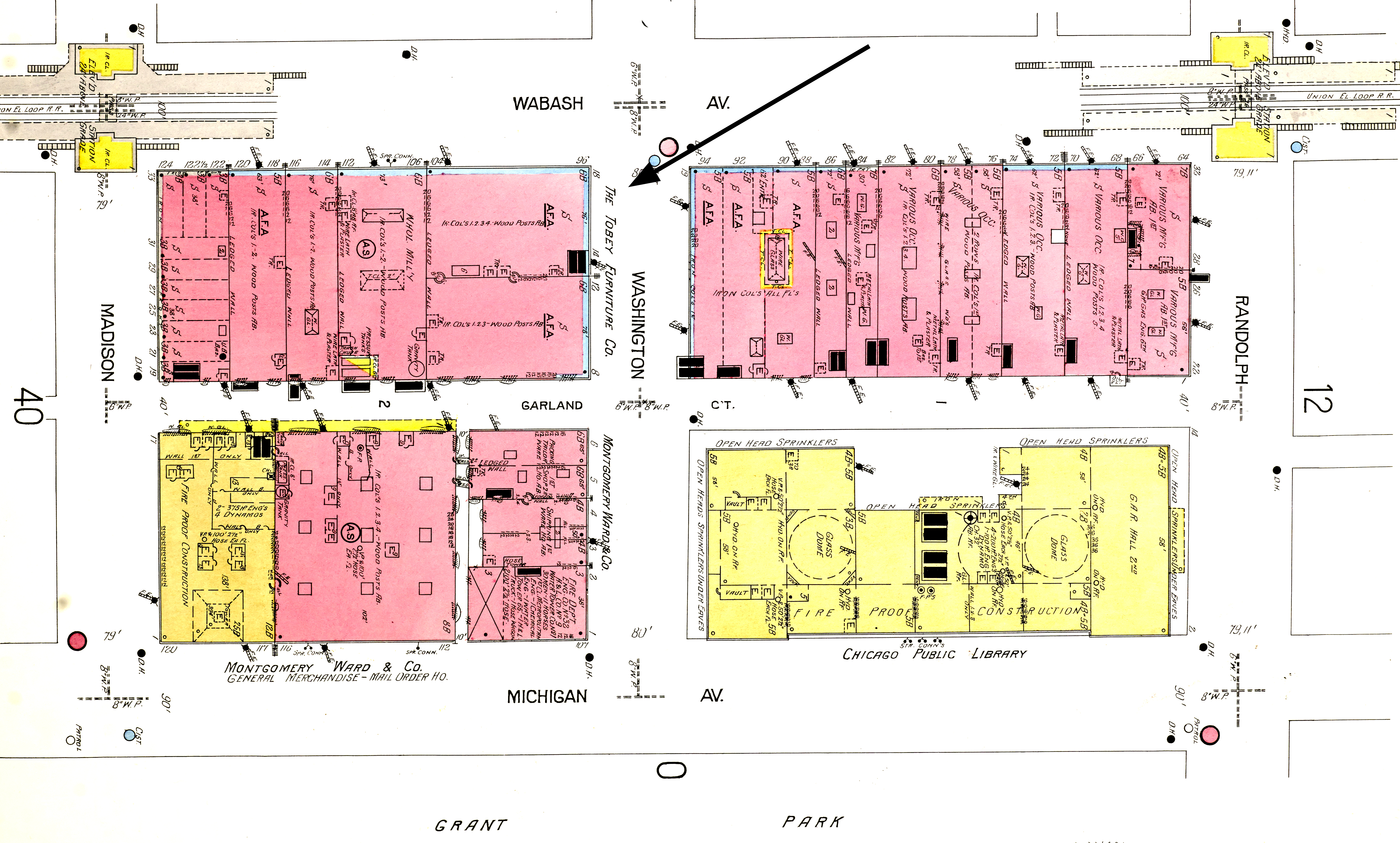