FIRST REGIMENT ARMORY.
It Will Be Ready For The Boys Sept. 1.
The new Armory of the First Regiment is approaching completion. The 1st of September was the time stipulated, but it may be ten days later ere it is turned over in a thoroughly finished state to the regiment, ready for occupancy.

The building is exactly what it was designed to be, and will meet all the requirements of the organization. It was never intended to be an imposing edifice, that would tower above its surroundings, but for a modest, neat structure, that would serve the purpose for which it was meant without an expensive outlay. Some foolish person succeeded in getting published in the Inter-Ocean a tirade of abuse, in the form of communication, directed against the new building and its builders, taking exception that it should be torn down and rebuilt so that it would rise above the Gardner House and other surroundings. But $18,000 was the price fixed as the limit of cost, though architects, Wheelock & Clay, have exceeded this sum by $4,000, and the work is satisfactory to the regiment, so far as its outward appearance is concerned. A number of improvements might be suggested inside, especially in the arrangement of the basement floor, where are to be the company rooms. There will be ten of the latter, arranged upon either side of the building, with hall running down the center and terminating with a door at the rear end, opening into the boiler and engine-room. These company-rooms are about twenty-six feet square, with fair light and ventilation. They will be fitted up with seats, carpets, clothing-lockers, etc., at the expense of the different companies.

The first floor is to be the drill-room, with two rows of iron posts supporting the second floor, and the second floor is to be the grand drill-room and hall for exhibitions, concerts, dancing, etc. There are no posts here to interfere with the evolutions of the troops. There is a gallery running all around, nine feet wide, ten feet above the main floor, and suspended from the roof by iron rods. All the floors will be double, with two inches of mortar between to deaden the sound. The upper floor is to be of Georgian pine, all clear. In front, from the basement up are the officers’ rooms, banquet-room, drum-corps room, closets, etc. A grand staircase ascends from the basement to the roof in front, and two easy staircases ascend in a similar manner at the rear.

In the attic, over the grand drill-room, there will be a space of about sixteen feet in the highest part. Here it is proposed to have a shooting-gallery, with targets for rifle practice, furnishing a distance of 125 feet, the length of the building. A comfortable staircase will lead to this apartment, which will be well lighted.

In the ceiling of the grand drill-room will be placed seven ventilating registers, four feet wide. In the roof are three ventilators, three feet ten inches in diameter, and eight feet in height. These are to be galvanized. The roof itself is claimed by the architects to be a model of strength and symmetry. It is covered with tim and composition. 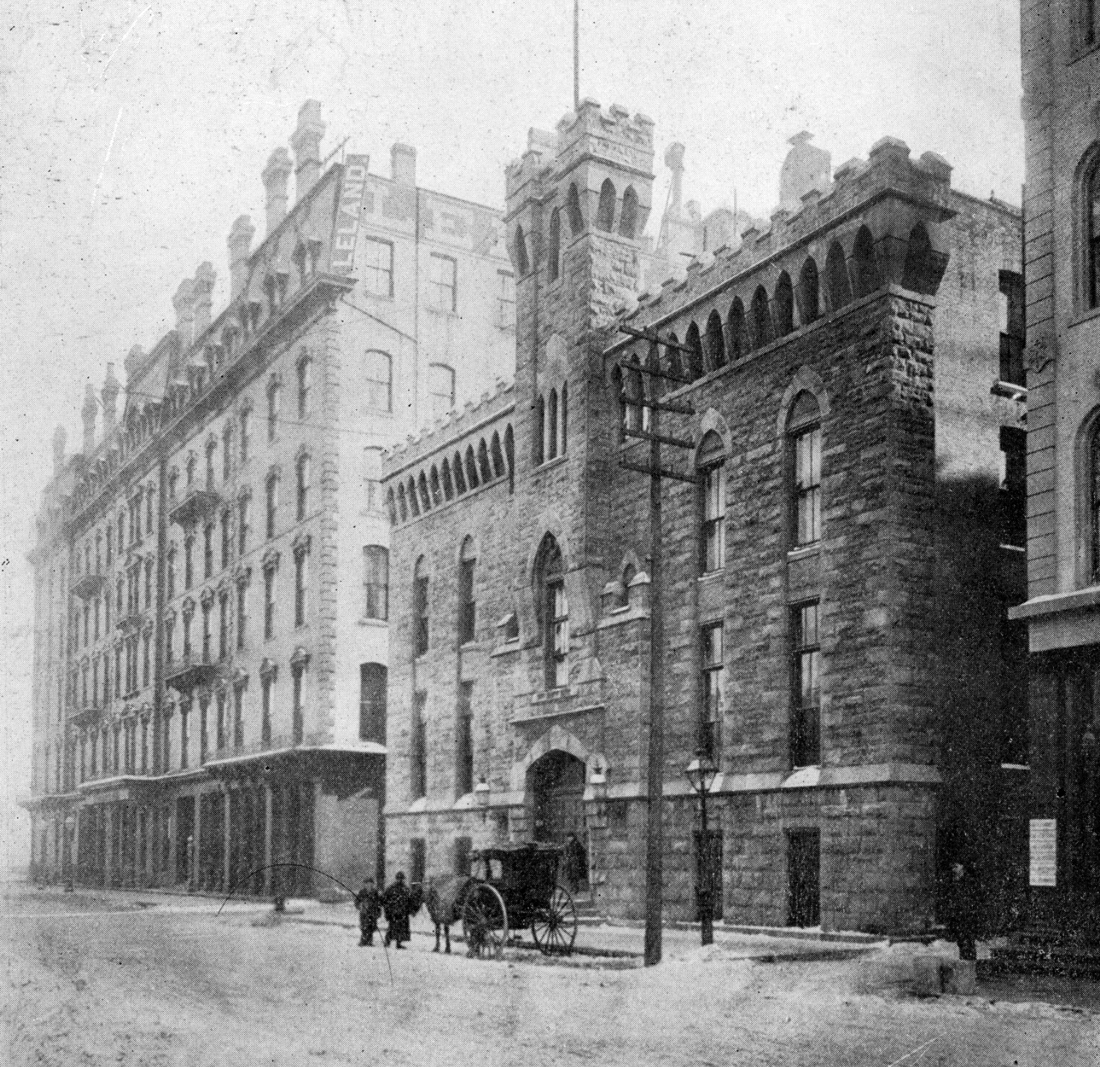 The outside of the building is completed, and its appearance, dimensions, etc., have already been described in the columns of this paper. It is built in the random-range gothic style of architecture, rough stone front, and surmounted by a low tower. The front is ornamented with the State Coat of Arms, and the name of the regiment. There is nothing left in the way of completion now except the finishing of the interior by the carpenters. The plumbing, gas-fitting, and steam-fitting are complete.

It was at first intended to depend upon one of the hotels in the immediate neighborhood for steam to heat the Armory, but it was finally decided by the owners of the building to erect an engine-house and boiler-room under the alley-way at the rear. The contract for the same is let, and the work has been commenced. This will involve an additional expense of about $1,400. It will be seventy feet long by ten feet wide, and will have a broad, low door, connecting with the basement of the main building. The boiler will be twelve feet long, forty-two inches in diameter, and will contain thirty-six three-and-one-half-inch flues.

ILLINOIS NATIONAL GUARD.—In the winter of 1876, the State Legislature adopted a code providing for the enrollment and arming of militia, and for an annual appropriation of $75,000 for the rental of armories and the expenses of annual encampments. This military code, which went into effect on July 1, 1876, fixed the term of service at five years, and compelled members to take the oath of allegiance. By general orders issued the same month, Major-General A. C. Ducat was named commander-in-chief of the Illinois National Guard, as the new organization was styled. The companies which had, from time to time, been organized throughout the State were consolidated into seventeen regiments and battalions of infantry and four batteries of artillery, grouped into three brigades, under command of Brigadier-Generals Joseph T. Torrence, Jasper N. Reece and C. W. Pavey, with headquarters at Chicago, Springfield and Mount Vernon, respectively.

The division organization was abolished in 1878, by the Legislature, and the number of troops re-enrolled was restricted to five thousand men. Under an order of Governor Cullom, commander-in-chief, the Third Brigade was abolished in 1880, and the State forces were consolidated into eight regiments of Infantry, one regiment of cavalry, and three batteries of artillery, forming two brigades. In 1885, one of the batteries of artillery was disbanded.

By enactment of the Legislature of 1884-85, the number of troops was reduced to four thousand men, and an appropriation of $80,000 in addition to the regular annual appropriation of $70,000, was voted to uniform the troops and provide for a permanent campground and rifle ranges. The uniforms issued in consequence of this action are similar to the fatigue uniforms worn in the regular army.

THE FIRST REGIMENT, ILLINOIS NATIONAL GUARD
This regiment was in progress of organization, but had enlisted only one hundred and twenty men, at the time of the breaking out of the labor riots of 1877. When, however, a call for troops was made, over six hundred men responded, and, with scarcely an exception, every active member of the old organization enlisted, and bore arms during the troubles. Colonel McClurg was in Europe at the time, and the command devolved upon Lieutenant-Colonel Samuel . Sherer. The regiment was stationed on Twelfth Street and in the lumber district. Several of the companies were stoned by the rioters and three men were badly hurt by the flying missiles, but the troops behaved with coolness and good sense, and not a shot was returned. After its duty here, the regiment was ordered to Braid wood, Will Co., 111., for two days’ service, thus making its entire time under arms about two weeks. Immediately after, and as a salutary result of the riots, Companies. ” H,” ” I ” and ” K ” were recruited, thus making full ten companies. Colonel McClurg retained the colonelcy until in December, 1877, when he resigned.

A degree of more than usual prosperity seems to have followed this regiment since its organization in 1877. Most of its officers and men are young in years, but are enthusiastic, under strict discipline, and well drilled; make a creditable display in peace, and, under the lead and control of the regiment’s veteran leaders, would make a good showing in a time of difficulty and danger. The present armory of this regiment is at Nos. 22-26 Jackson Street, in a building especially erected for its uses by the Union Mutual Life Insurance Company of Maine, and occupied under a ten-year lease. Although Cos. “H” and “K” have been disbanded, the regiment feels cramped for room, and is making vigorous efforts to secure more commodious quarters. 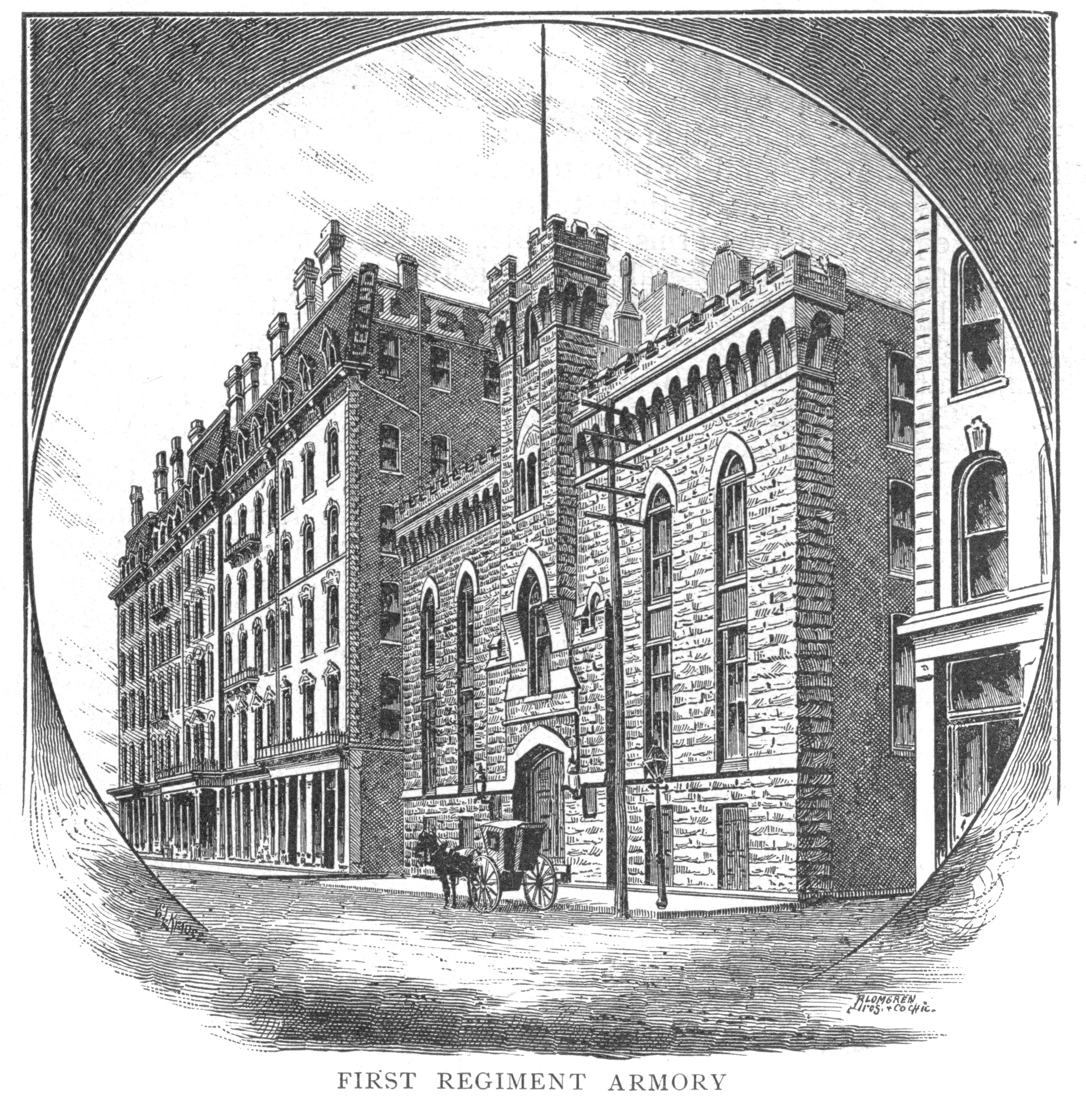 It is rumored that the First Regiment Armory, Nos. 22, 24, and 26 Jackson street, will be leased for ninety-nine years by a company that will extend from $50,000 to $75,000 in improving the building for use as a theater. The Ludington estate owns the property.

The armory moved to larger quarters on Michigan Avenue and 16th Street. The Illinois Theater occupied this site from 1900-1936. 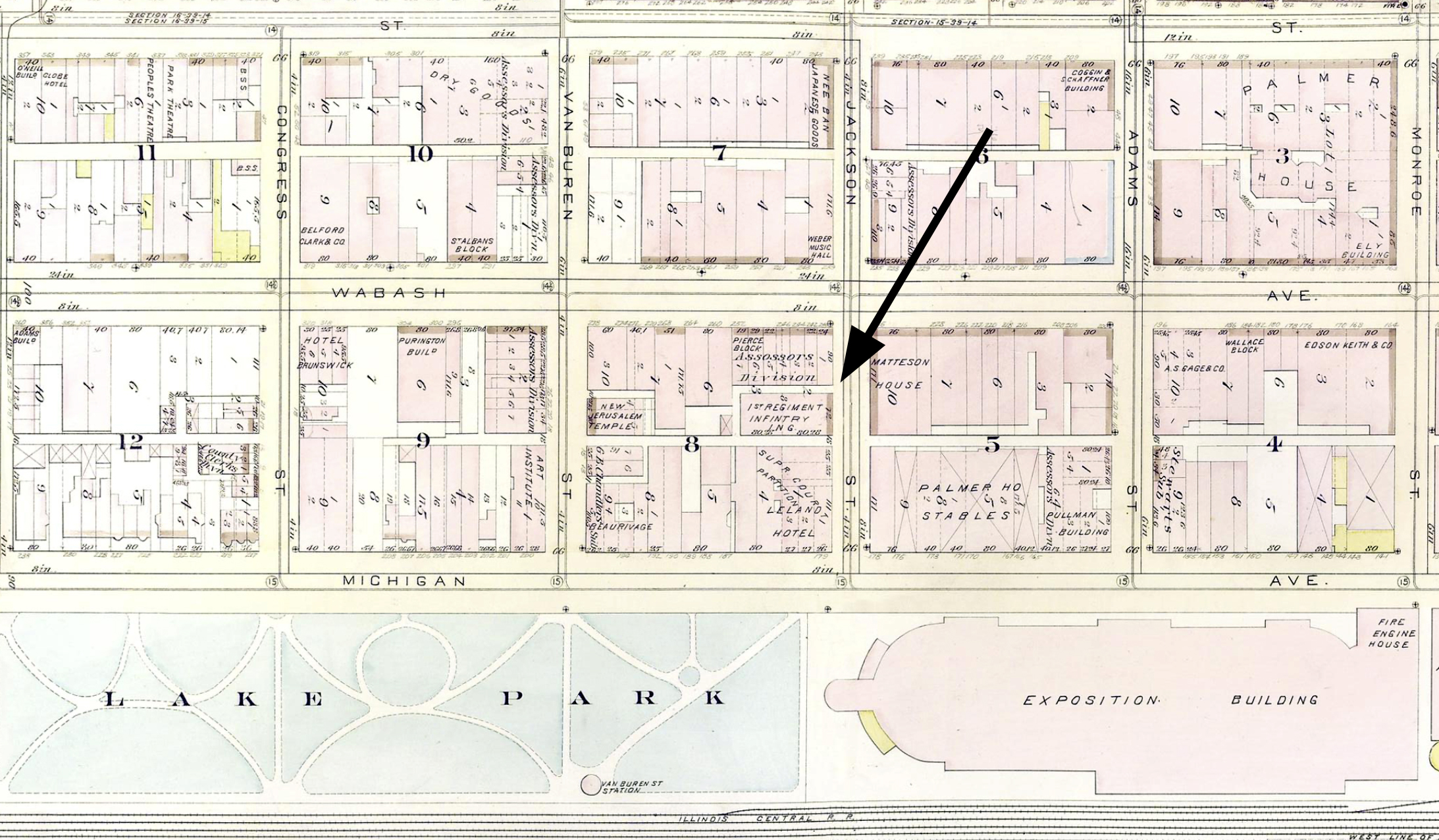