On the extension iof Dearborn street, very valuable improvements are now to be observed going up. On the west corner of Dearborn and Monroe streets, H.H. Honore is erecting a five-story marble front, which will cost $150,000 when finished. On Monroe street, the building will front 46½ feet, and on Dearborn, street 190 feet.

Directly on the opposite side of the street, several gentlemen of this city are erecting a five-story marble front (Shepard Block), which is to extend 300 feet on Monroe street. Four stories of this building are already up. Its entire cost will be in the neighborhood of $200,000.

THE HONORE BLOCK, OR REAL ESTATE EXCHANGE.
This imposing structure, now in process of erection on the southwest corner of Dearborn and Monroe streets, of which we present an engraving in this number, will be, when completed, one of the most elegant buildings in Chicago. Its dimensions are one hundred and eighty-nine feet six inches on Dearborn street, by forty-six feet four inches on Monroe. There are five stories and a basement, the whole surmounted by a heavy galvanized iron cornice, highly ornamented with statuary, etc.1 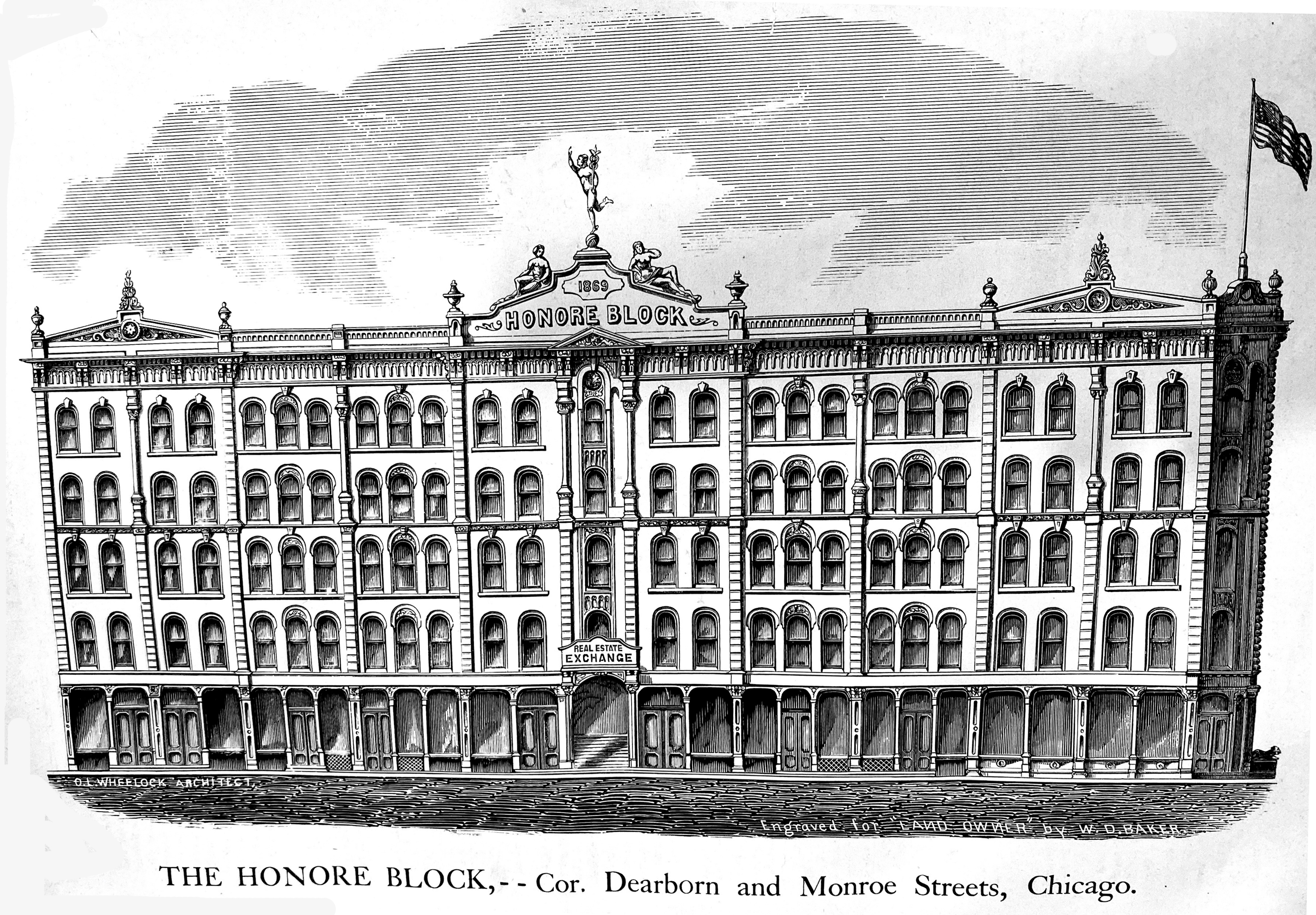 The total height from the sidewalk to the top of the cornice is seventy-two feet. It is of Athens marble, and the entire front will be beautifully enriched, while midway between the north and south ends, and directly over the main entrance surmounting the cornice, will stand the figure of the mythological god Mercury, twelve feet in height, and at his feet, in a reclining position, two other beautiful and appropriate pieces of statuary. Directly under this will be the words “HONORE BLOCK” in cut stone, as in the engraving. The main entrance on Dearborn street, ten feet wide, will be protected by a portico, over which will appear a beautiful cut stone entablature, forming a beautiful monogram of the letters “H.H.H.,” and below the words “Real Estate Exchange.”2

The basement, eight feet high, will be arranged for stores and offices. The entire edifice is to be warmed in the most approved manner by A. L. Winne’s Union Steam and Water Heating Apparatus, the best in use, and always the most thorough and economical method of warming buildings, however large, and for which A. L. Winne & Co. are the sole proprietors for the states of Illinois, Indiana, Iowa, and Wisconsin; the gas fixtures and plumbing being done by J. Powell, 103 Madison street.

The entire first, second and third story windows will be filled with polished French plate glass. The first story will be divided into eight stores, and a banking office fronting on Monroe and Dearborn streets. This story will be supported by iron columns, the banking office having a frontage of forty-eight feet on Dearborn street, and forty-four on Monroe. There will be nine largw, well-lighted and ventilated offices in the second story, and ten in the third, each supplied with ample closets, presses, water, marble mantles, etc., finished with hard-wood doors, casings, shutters and floors. The second, third, fourth and fifth stories will each have a corridor fifteen feet wide extending the entire length of the building. The structure will be supplied with three light and ventilating shafts, each six by seventeen feet. The second story is reached by a single flight of stairs, ten feet wide, from the main entrance, and thence to the third story by two flights, one on either hand, running at right angles with the main entrance stairs from the second story landing, and the same is repeated on each of the stories above. At the foot of these stairs, in the second story, and facing the main entrance stairs, will be a beautiful niche containing a piece of exquisitely wrought statuary.

The style of architecture is Renaissance throughout, the front being highly ornamented with elaborately wrought key-stones, etc., and it will be ready for occupancy early in the spring. Its probable cost will be about one hundred and fifty thousand dollars. It will be an ornament to the locality in which it stands, and a monument to its enterprising owner, a gentleman known in real estate circles, as well as a deserving credit to O. L. Wheelock, Esq., the architect. 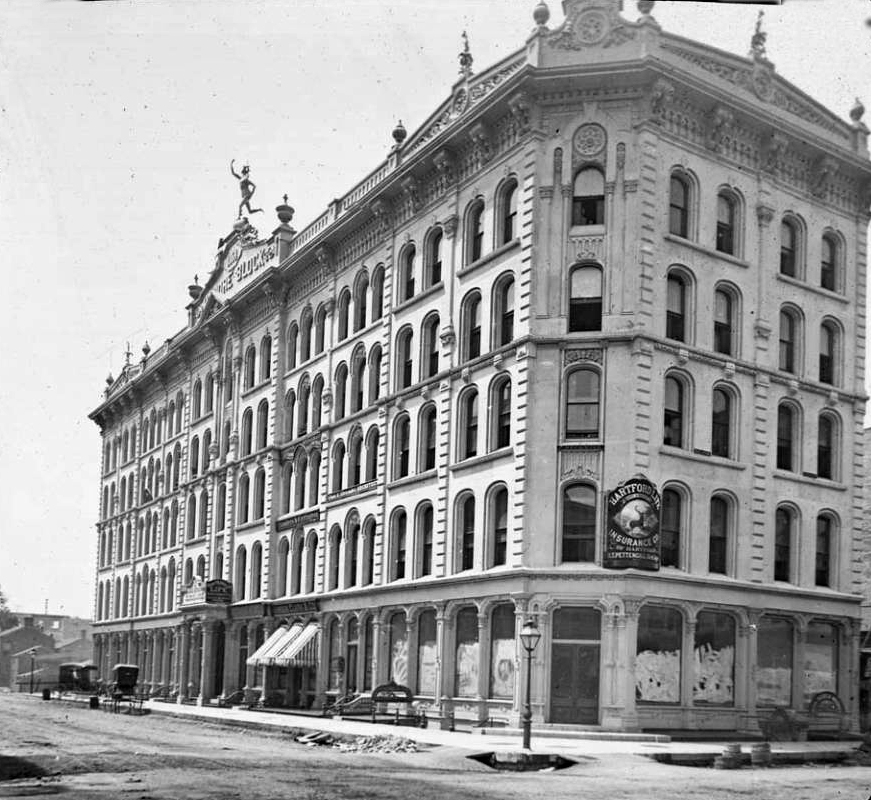 O. L. WHEELOCK. South Side.
The second Honore Block, the foundations of which are now being laid on the northwest corner of Dearborn and Adams streets, adjoining the first Honore Block is destined to be the largest, as well as the richest in design and finish, of any heretofore erected in this city. The superstructure is to be six stories (105 feet) in height above the sidewalk. The measurements will be 196 feet on Dearborn street by 114½ feet on Adams street, giving a frontage of 304½ feet. The two principal facades will be the elaborate French style known as the Renaissance, and will be built Joliet marble. The block will be surmounted by a Mansard roof of new and elaborate design, and covered with slate. The dormer windows and cornices are to be entirely of iron. A prominent feature in the design will be the grand entrance on Dearborn street, 18 feet in width, two stories in height, and protected by a canopy supported by eight Corinthian columns, adorned with appropriate statuary. From this entrance will be a hall of the same width, leading upnto a fine restaurant on the first floor, and a wide flight of stone steps leading to the second story. Each story above the first will be traversed the entire length of the building by a hall 12 feet wide, well lighted and ventilated. The halls in the first, second and third stories will be floored with marble. Two flights of stairs, one eight and the other seven feet in width will extend from the side-walls to the sixth story, in addition to which will be one of Otis’ patent steam passenger elevators, now being manufactured expressly for this building. It will surpass anything of this description ever introduced in the West, and will render the upper stories fully as desirable for offices or apartments as the ground floor. The first story will be divided into stores, with glass fronts at both ends. These stores will be furnished with fire-proof vaults. The second and third stories will be rented for offices, and the fourth, fifth and sixth stories will be divided into rooms and suites for hotel purposes. Much credit is due to the proprietor, Mr. H. H. Honore, who is one our most enterprising business men, as this will be the second mammoth business block he will have added to our city in as many years. The cost will be about $300,000.

DEARBORN AND LA SALLE STREETS.
No streets in the city have been so changed in appearance during the past year as La Salle and Dearborn streets. The completion of the Bigelow Hotel, and new “Honore Block,” to be built on the northwest corner of Adams and Dearborn, will make a continuous front of new buildings from Monroe street to Jackson. 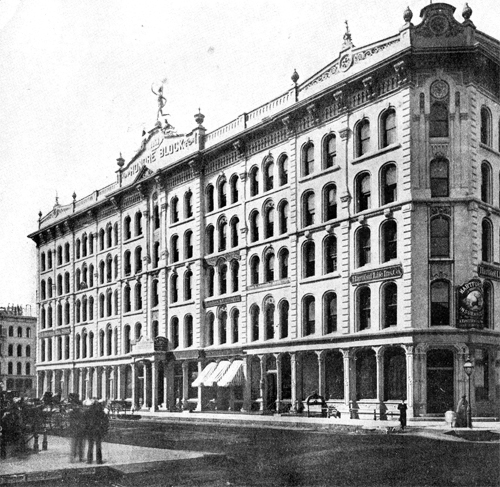 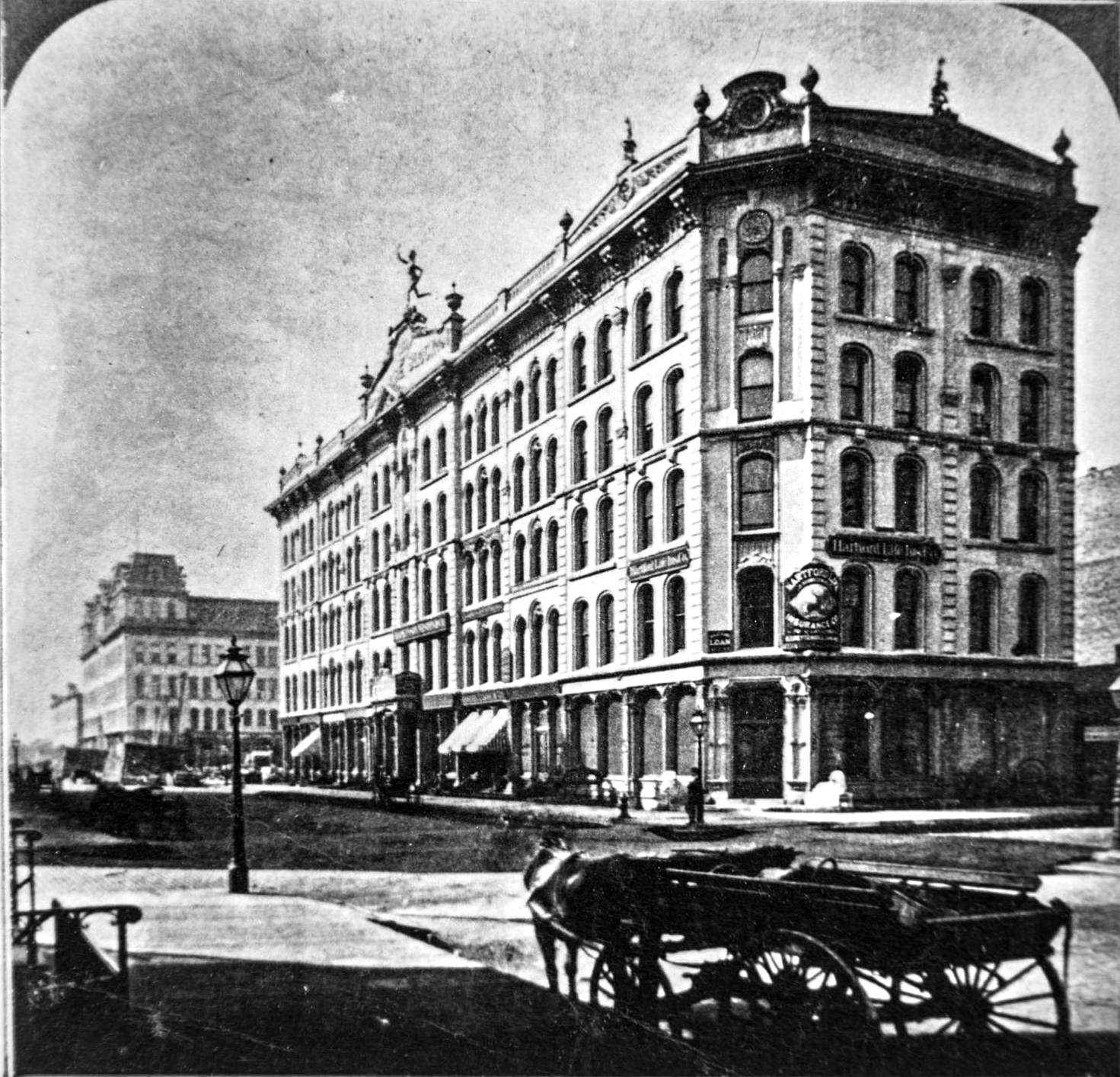 Honore Block
The Bigelow House is shown on the left, under construction. It was scheduled to open on November 1, 1871. 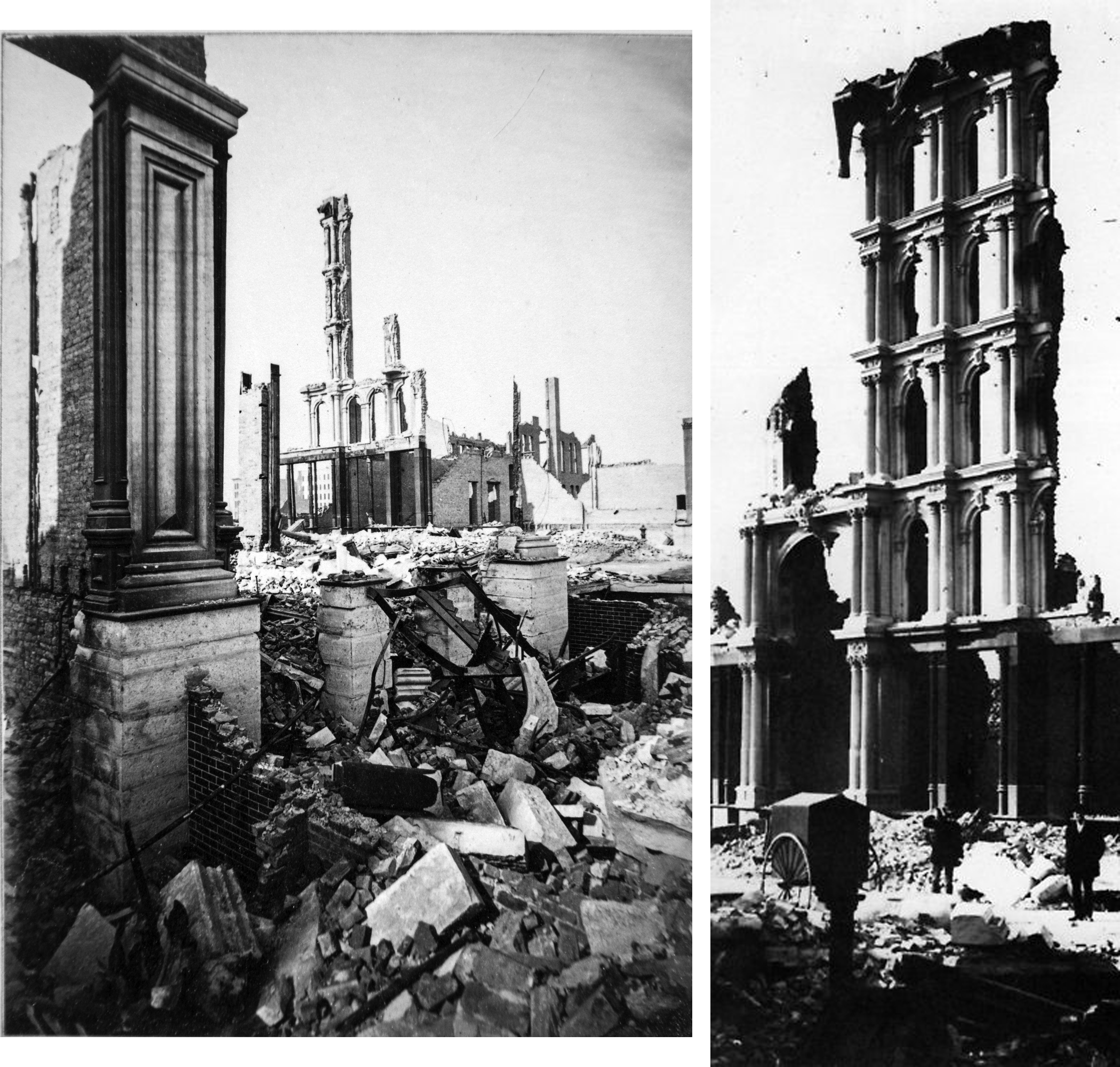 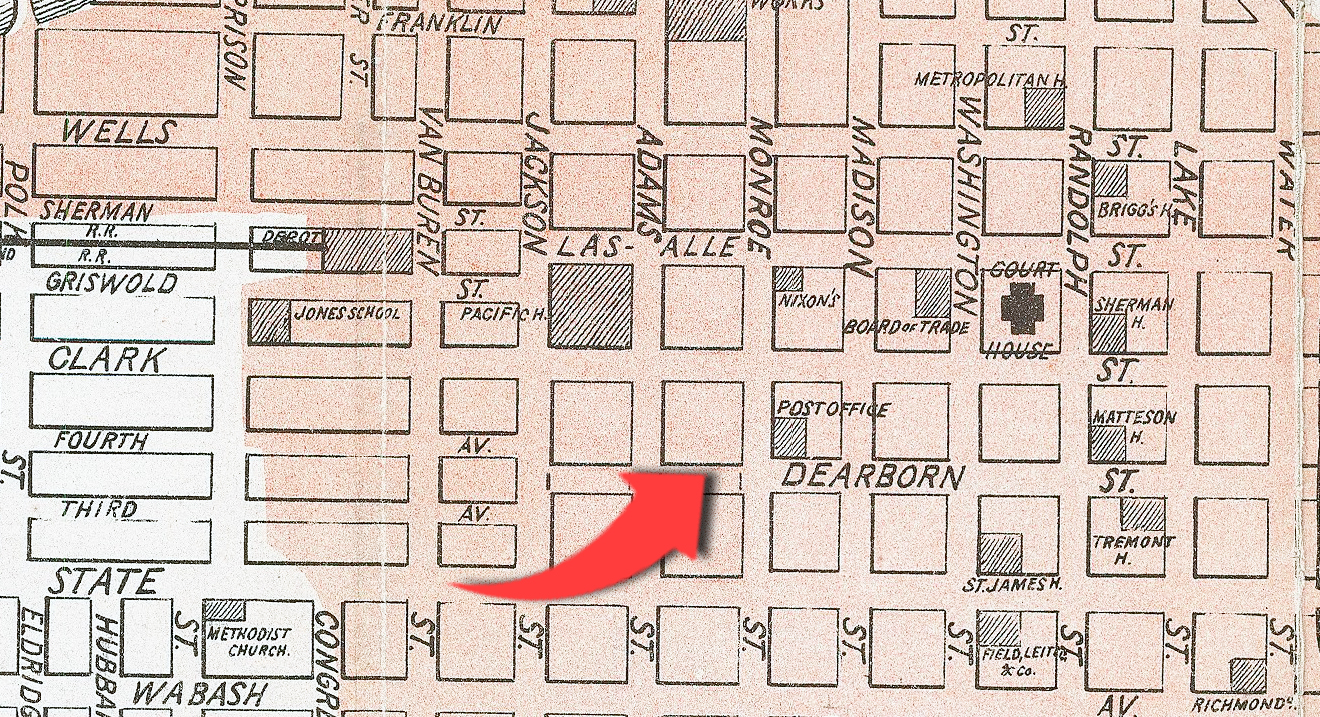 1Henry H. Honore, the owner of the building, was the father of Bertha Honore, who married real estate mogul, Potter Palmer on July 28, 1870.

2A similar statue of Mercury was placed on the top of the second Honore Building after the Fire as well as on top of the original Board of Trade Building in 1882, but no records can be found whether the statue was the same or built by the same sculptor.