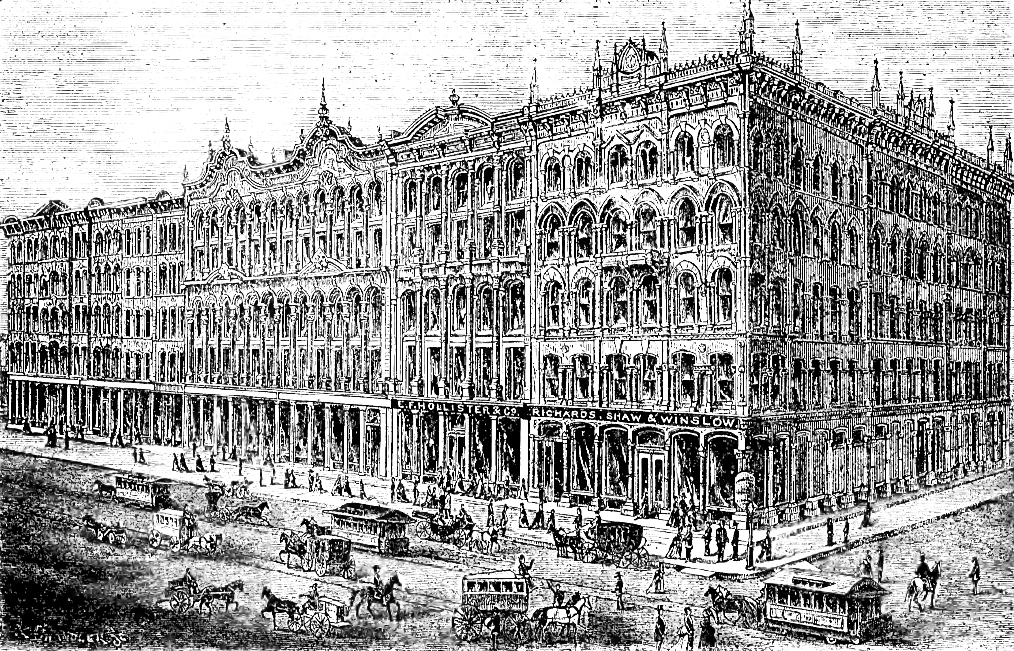 Chicago has been visited by another large conflagration, this time right in the heart of its magnificent business centre, and a loss of nearly three-quarters of a million dollars of property is entailed, including the total destruction of a splendid edifice and the partial damage of two others. The south end of the massive and palatial Booksellers’ Row, on the east side of State street, between Washington and Madison, has succumbed to the fiery element, and for a time the flames bid fair to work destruction on one of the finest blocks in te land, if not on the elegant rows of buildings on the opposite sides of State, Madison and Washington Streets and Wabash avenue.

The Telegraph Tardy This Time.
And The monster came at the early hour of 4½ o’clock this morning, stealing like a thief in the night and breaking out with great and sudden fury. The flames were first seen by Officer McShane, of Pinkerton’s police, who was walking in front of Giles Bros. & Co’s. great jewelry store, Nos. 121 and 123 State street, adjoining the Boyce building on the northeast corner of Madison, and they burst out from the front windows of the top or fifth floor in great volume. He ran to the of State and Randolph streets and gave the signal, but for some reason, at present, unexplained, the bells did not ring, nor did they give the alarm when box 14, at Dearborn and Washington streets, was turned in by Sergeant McDonough, of Pinkerton’s force. Officer Mead, of the regular police, finally succeeded in getting an alarm from box 19, corner Wabash avenue and Madison street. In the meantime, but twenty minutes after the fire broke out at about 4:35, engine No. 13, stationed at Dearborn and Lake streets, answered before hearing the gong in their house. By this time the magnificent structure of five stories in height and 148 by 50 feet, was enveloped in a dense mass of flame and smoke, which shot upward and outward in heavy volumes. The puny efforts at first made were rendered herculean in effect as soon as the Fire Marshal reached the scene, which was in a very few minutes after the bells rung. He gave a second and a third alarm, and called out eighteen engines and their auxiliaries. Heavy streams of water were soon poured into the burning pile, and on surrounding property. The heat was intense, and warped and cracked the glass in the stores on the opposite side of the street—a hundred feet distant.

How the Fire Spread.
There was a vast amount of inflammable material on the floors above the first, and the fire burned with alarming rapidity. The adjoining building on the south side is the colossal one occupied by Richards, Shaw & Winslow, wholesale dry goods dealers, and, but for the barrier presented by a heavy wall, it would have soon caught fire. The corresponding structure of Peter Page, on the north, was sorely threatened with total destruction for the nonce, and but for the pomp measures taken by the Marshal, would have been burned in the conflagration. Streams were taken up on the roofs of the buildings last mentioned and a steady torrent of water poured from top, rear and front.

The cornices melted and fell in all directions, and the splendid ornamental front of Nos. 121 and 123 was soon a thing of the past, and a pile of ruin. While about 30 firemen were busy at the rear of the building a portion of the top wall fell, and one of them, James Lefevse, Assistant-Foreman of No. 12, was badly injured about the the lower limbs. 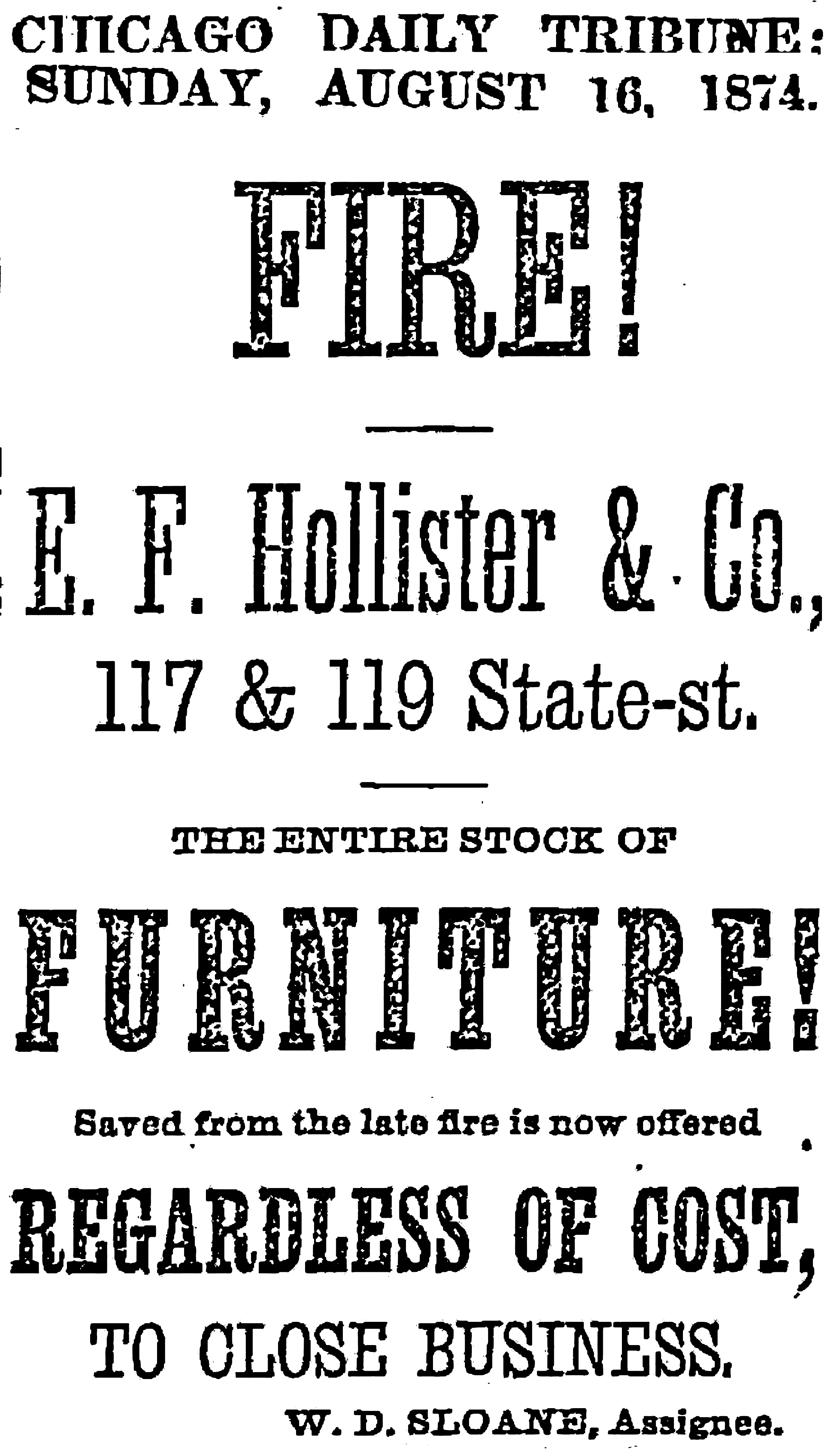 It was not until 6 o’clock that the danger of a spread of the conflagration was past. By 8 o’clock the fire was almost entirely extinguished. An immense crowd of citizens gathered immediately after the alarms were give, and the streets again presented the appearance Chicago has so often witnessed on similar occasions.

The loss, as stated, will reach three-quarters of a million dollars. The first floor of Nos. 121 and No. 123 was occupied by Giles Bros. & Co., as a retail jewelry establishment. It was one of the finest stores in the country, and was truly magnificent in its fittings, it containing many ornaments and works of art and virtue. The stock consisted of diamonds, watches, clocks, bronzes and jewelry, valued at $250,000, on which there is an

The last-named firm suffered no damages to their immense book stock.

Hollister & Co. employed 100 hands in the burned building. Their business will suffer only temporary interruption.

Richards, Shaw & Winslow occupy the Boyce Building, on the corner of State and Madison. Their stock was damaged to the extent of $40,000 by water. The building was damaged about $10,000 worth.

The insurance on stock is $350,000, placed in numerous companies in this country, Europe and Canada.

The elegant new five-story marble front store Nos. 121 and 123 State street, rebuilt on place of one destroyed by the fire last summer, and owned by Phelps, Dodge & Co., of New York, has been rented by them for three years to Mandel Brothers, dry goods dealers of this city, and will be opened by them on the 1st of March next. The store was rented for $14,000 for first year, $15,000 for second year, and $16,000 for third year. 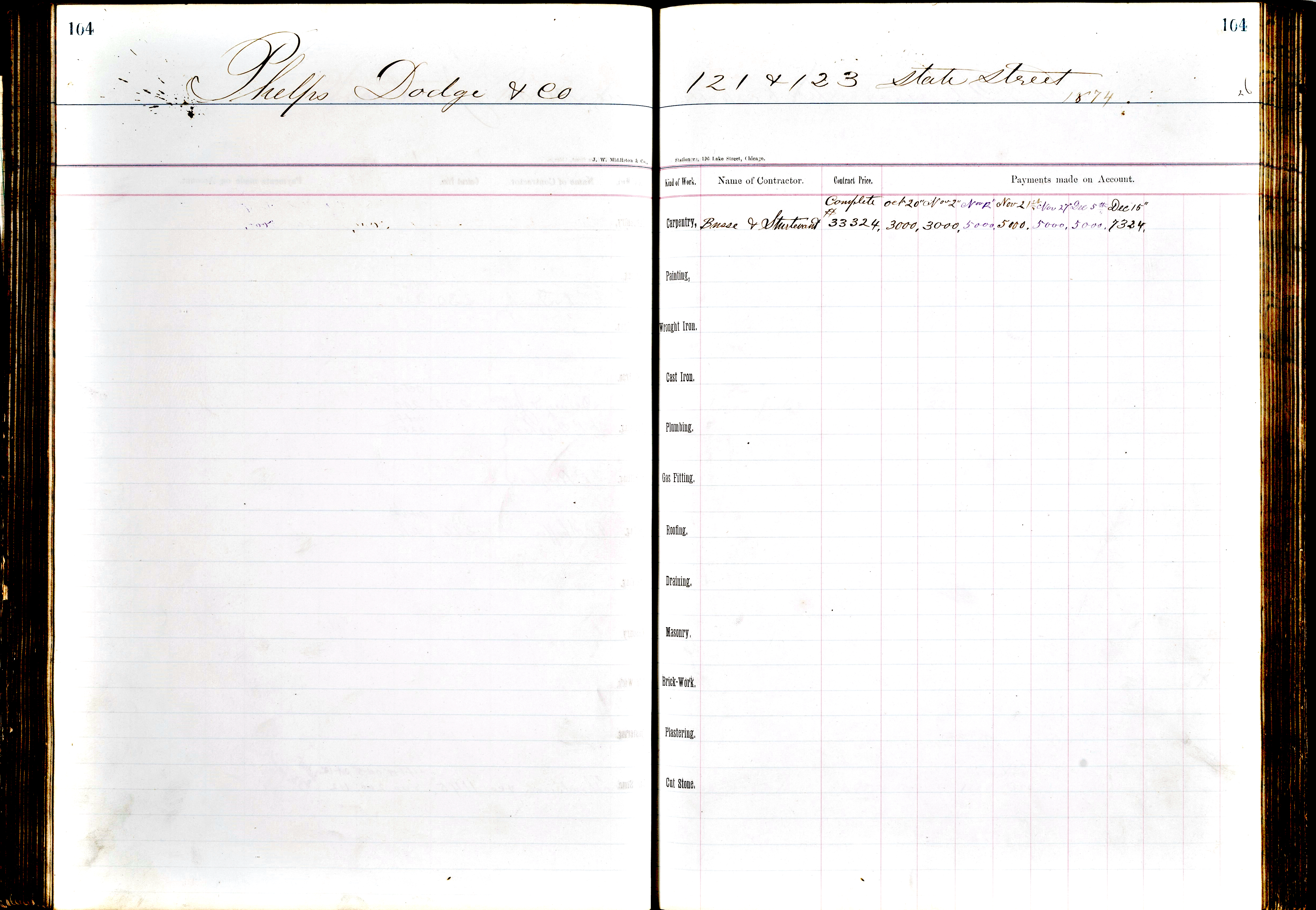 MANDEL BROTHERS. The house of Mandel Brothers is now one of the oldest in Chicago. Older readers will remember that it was established in the year 1855. Subsequently, at the corner of State and Harrison, an elegant building was erected by the firm. This was destroyed in the July fire of last year, after which the energetic proprietors found temporary quarters on Washington street until their removal to the present elegant establishment 121 and 123 State. The building now occupied by them is conceded to be one of the chief dry goods houses of the country. A choice and varied stock of goods, uniformity courteous attention to customers of every grade of life, a willingness to refund money when articles do not prove as represented, and a determination not to be undersold, are the distinguishing features of this excellent institution. These characteristics have given the firm of Mandel Brothers an enviable position in the esteem of the entire community. 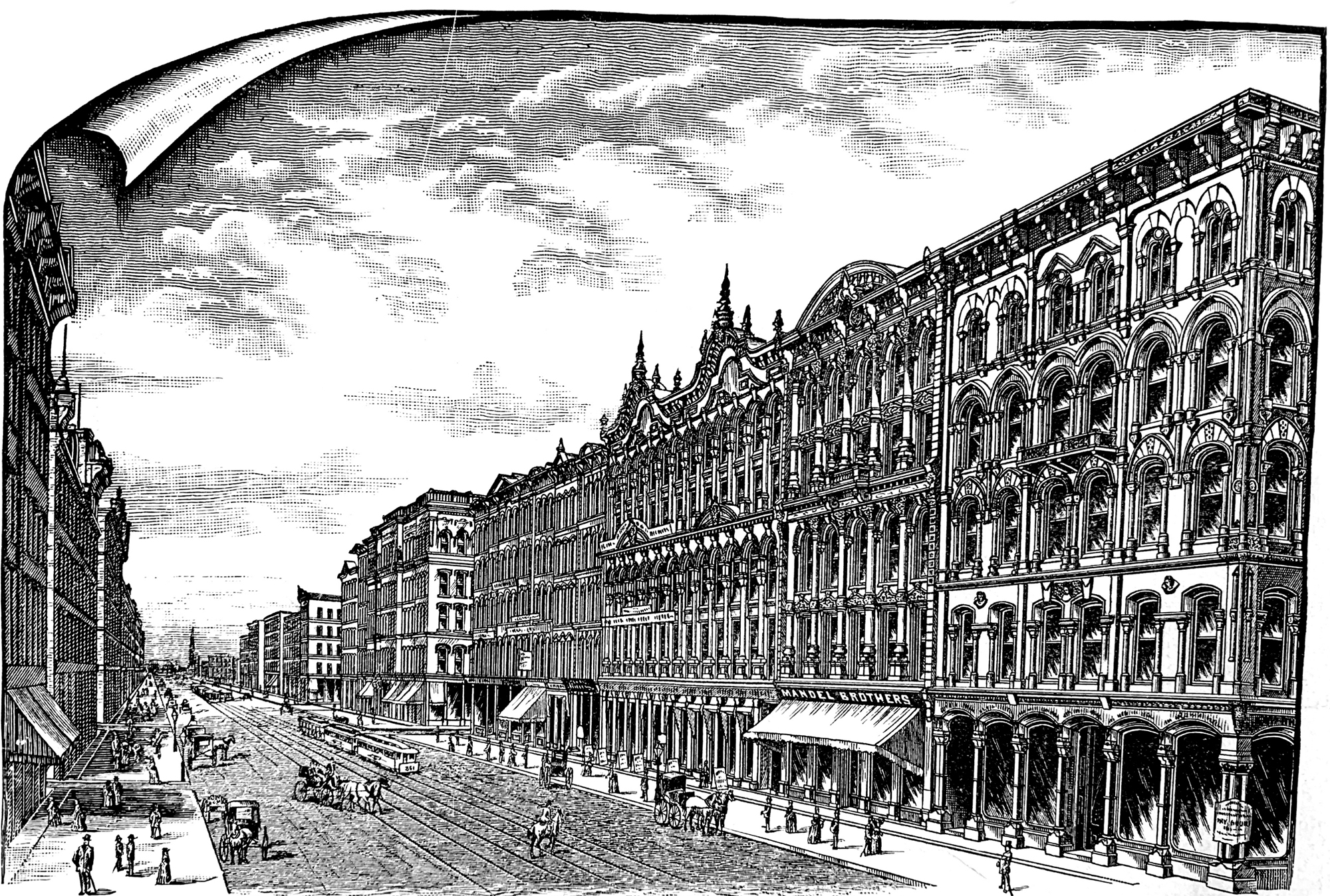 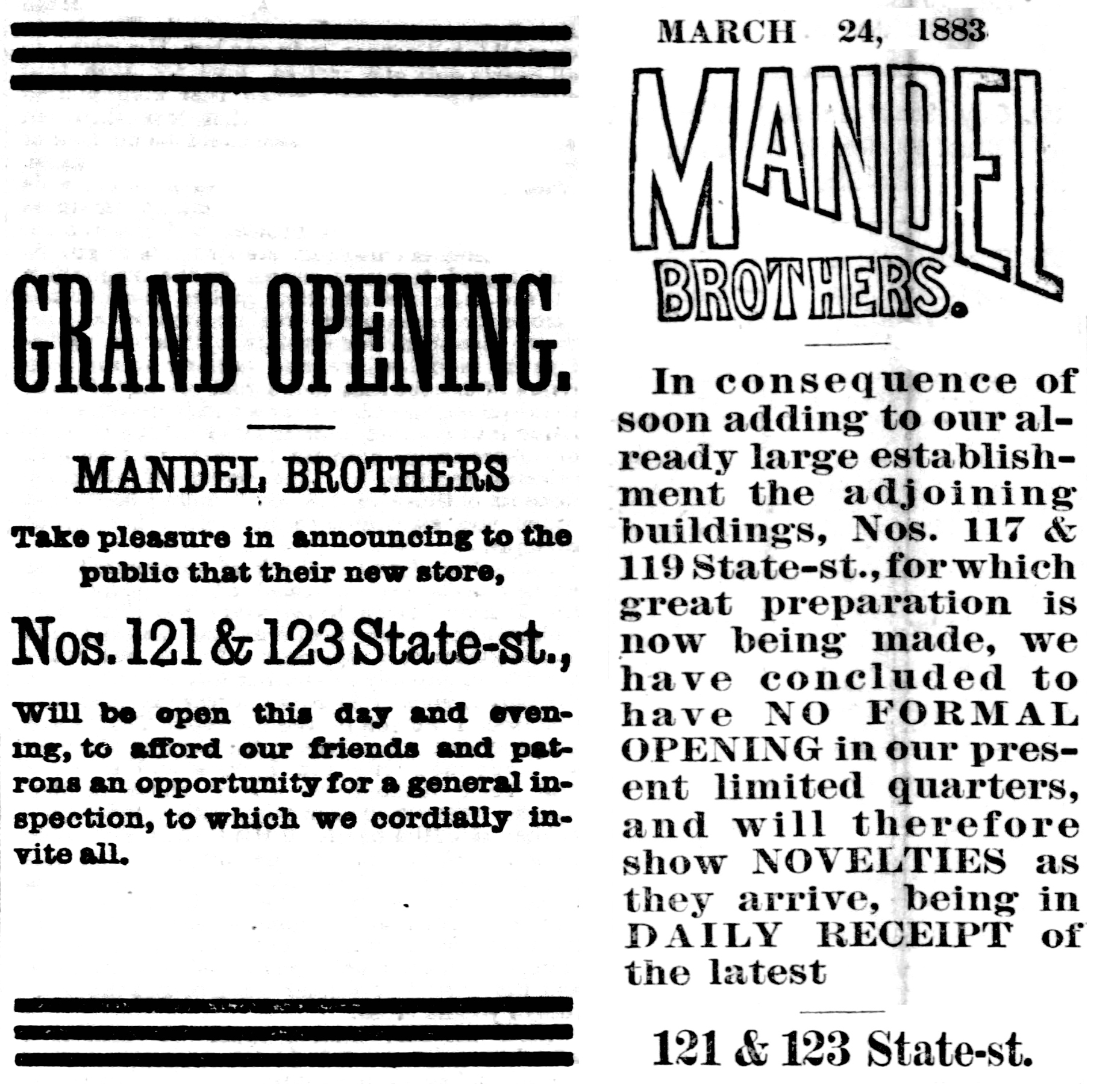 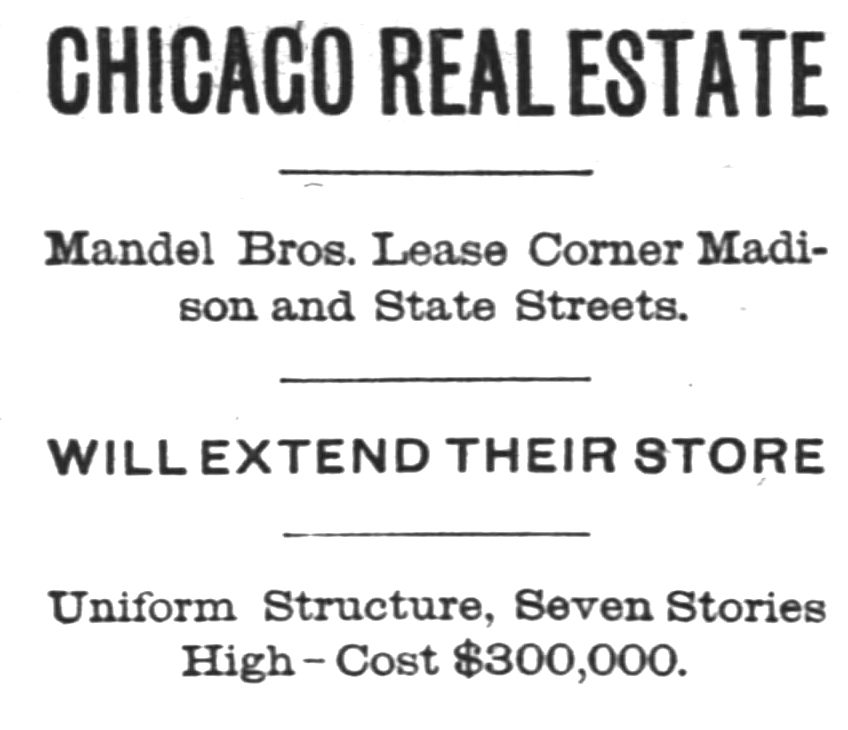 Mandel Bros. have leased from Marshall Field for a term of years, for a consideration that is not stated, the property at the northeast corner of State and Madison streets, 53×150 feet, adjoining the store of the firm named. Possession of the building at this corner has been secured, and work has been commenced that will make this structure an integral part of the dry-goods establishment. The height of the corner and adjoining stores will be made seven stories, and the entire space will be occupied by Mandel Bros., making a total of 153 feet on Madison street, covered by a uniform improvement eight stories high. In addition to this is the Wabash avenue extension of the store, which also will be improved.

About a year ago C. D. Peacock surrendered the ninety-nine year lease he had acquired on the property to the owner of the ground, Marshall Field. Within a short time, measured in weeks, Mandel Bros. had secured the property from Mr. Field for a term of years under lease at a rental that is not revealed. During the time from then until now, Mandel Bros. have been preparing to take possession. This was finally made possible by the removal of James Wilde, Jr., & Co., who occupied the main and other floors, to a Wabash avenue location.

Plans have been drawn by Jenny & Mundie for the two fronts, of architectural iron, and the other improvements that are to make of Mandel Bros.’ establishment one of the finest of its kind in the world. Not only the corner but the present store building as well is to be improved. All dividing walls and partitions, as to the State and Madison street premises, are to be removed, leaving an unobstructed sweep from the Madison street entrance (to be made a particular feature) to the north line of the store. 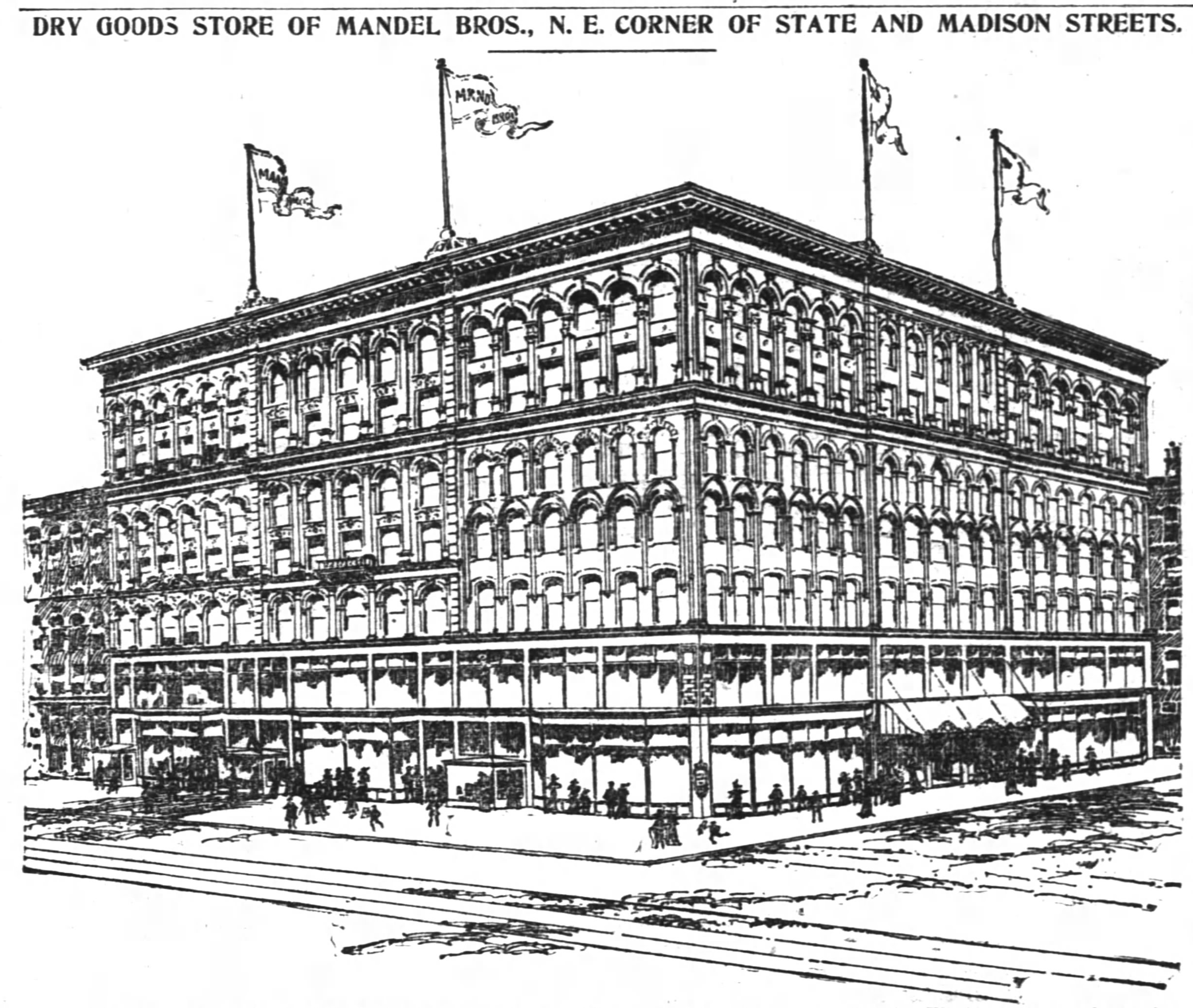 This is the way the building will look May 1 next, when reconstruction is completed. Work commenced on the corner building (until recently occupied by James Wilde, Jr., & Co.) yesterday. The store will be seven stories and basement, 153×150 feet, exclusive of extension on Wabash avenue.

In all, upward of $300,000 will be expended. The sum looks large, but the entire space is to be made over. Sixteen new elevators will be installed, and may internal changes instituted, in addition to the structural and architectural work on the fronts.

It is expected that the work will be entirely completed by May 1 next. The additional space thus secured will be utilized for the installation of new departments, as well as the increase of those established. It is intended that the minninery department shall be superior to anything of its kind in the world. There will be a new and enlarged cafe, and ladies’ apartments, parlors, writing-rooms, etc, commodious and surbly appointed.

The dry goods house of Mandel Bros. was established in 1855. In 1875 the firm located itself on State near Madison street. In 1879 the property adjoining to the north was purchased. Five years ago the Wabash avenue property was bought; and now the corner is acquired. For many years Mandel Bros. have been desirous of securing the corner. The difficulties of one kind or another have been removed. Complete possession has been secured of the of the corner structure, and the work of improvement cannot be delayed. 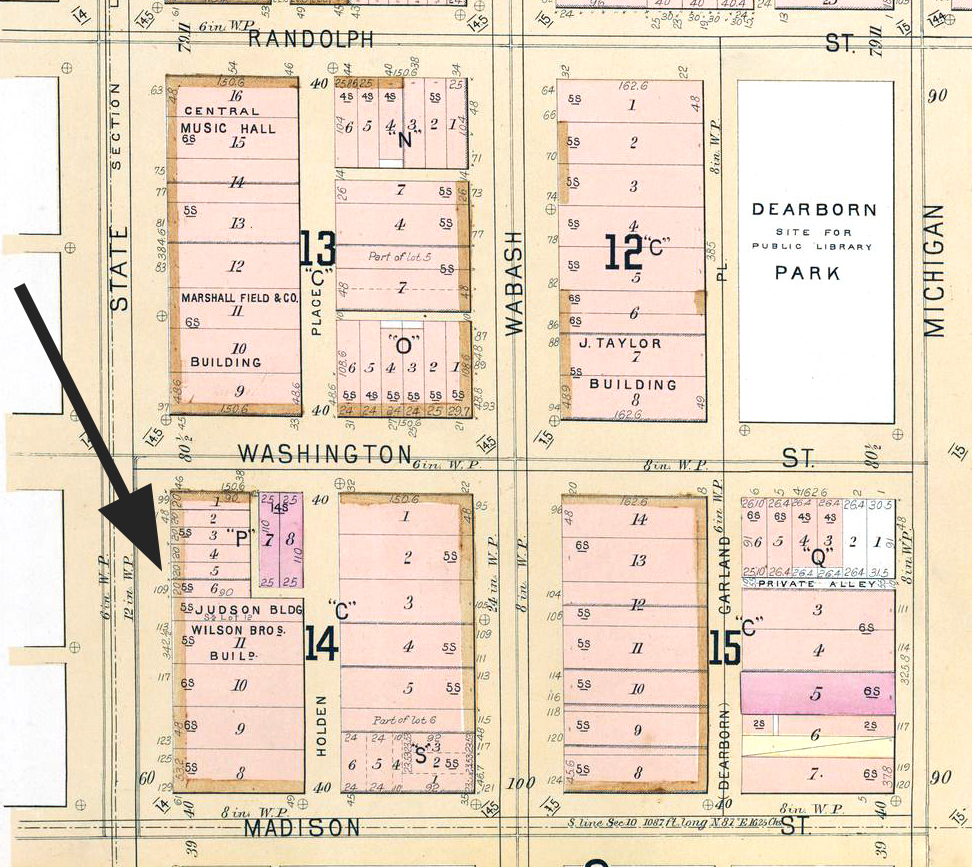