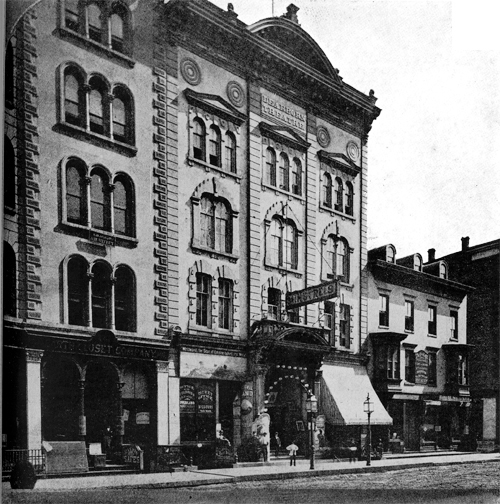 THE DEARBORN THEATRE OPENING.
In reopening the Dearborn Theatre, now “Aiken’s Dearborn Theatre,” Mr. Aiken has ignored its previous existence and accompanying fiasco under first management, and gave the cosy, beautiful establishment a formal and regular christening last evening. During the past three weeks the carpenters, decorators, upholsterers, and painters have still further beautified the interior. New scenery has been added, a new drop curtain painted, and the stage machinery has been put into complete working order. The exterior of the theatre has also been finished and now presents an exceedingly neat and tasteful appearance. All the conditions of a first class theatre have been observed, and all the latest improvements secured, so that there is probably not a theatre in the land more thoroughly equipped or better adapted for the successful production of the drama than the Dearborn. In addition to all these features, the theatre now has a first-class company, which will probably be strengthened in time by important accessions, and a manager, who to a technical knowledge of his business adds unimpeachable honor and courtesy as a gentleman, excellent business tact and a catholic taste in producing dramas, and will bring to it indomitable energy and a determination to allow nothing upon his boards which shall lower his high standard of morals and propriety which he has always carried out in good faith. As the manager and lessee of Wood’s Museum, he achieved a wide-spread popularity and a success both dramatic and financial, which were almost unexampled. In the new theatre, which affords him s still wider scope for the furtherance of his place, we make no doubt that be will meet with a correspondingly increased degree of success.

The theatre was literally crowded from dome to parquette with a handsome and enthusiastic audience, and presented a beautiful coup d’arts. After the audience became seated the curtain rose and Hon. Geo. C. Bates advanced to the footlights and, in behalf of the manager delivered an address.

HISTORY
In the winter of 1867-68, Frank E. Aiken was instrumental in the renovation of the theater building Nos. 115 and 117 Dearborn Street, originally known as the Varieties, and on the 18th of January, 1869, threw open the doors to the public. The edifice had been transformed into a first-class place of amusement, and the manager had secured an excellent stock company, of which he was the head. The inauguration ceremonies consisted of an address by Hon. Geo. C. Bates, which was filled with humorous points, but which contained no very valuable allusions to the dramatic history of the city. The opening play was Cyril’s Success, rendered by the stock company. 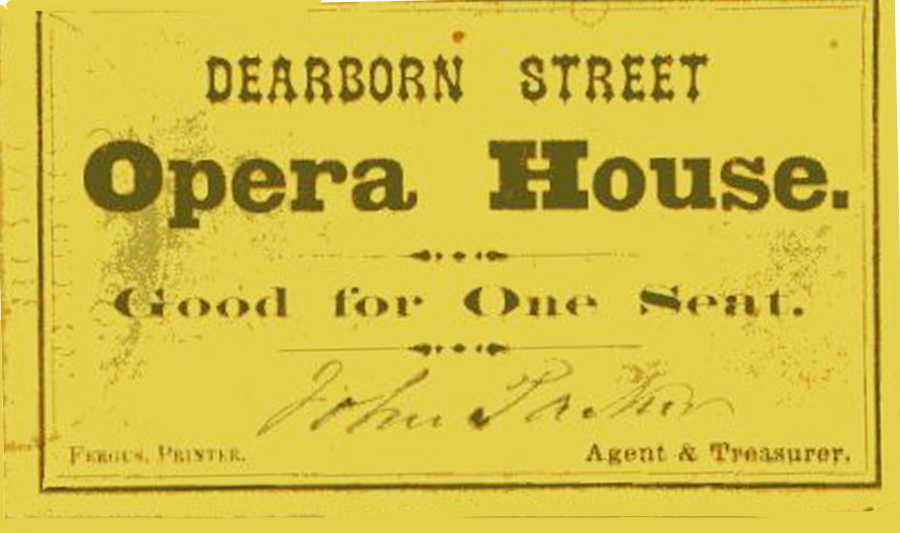 The new theater started out with fair promise of turning Cyril’s Success into Aiken’s success, but plans are frequently thwarted. Numerous changes of bills were made, and very commendable acting was done, but the financial portion of the undertaking was disastrous, and Mr Aiken retired about the 1st of July, 1869.

The house then became known as the Dearborn Theatre in August, 1869, it was occupied by Emerson & Manning’s Minstrels. A two weeks’ season of German opera bouffe began May 30, with Pauline Canissa, soprano; Claussen and Dziuba, alto; Habelmann, tenor; John Klein, bass.

The character of the place was again changed June 5, 1871. The Wyndham Comedy Company appeared in Caste, achieving a great success. This company played throughout the summer, giving Caste, A Happy
Pair, Ours, A Scrums Family, and standard comedies.

The fall season was opened August 21, by the Dearborn Minstrels. On the night of October 9 the bill announced was a burlesque, and a sketch called Love and War. The drop curtain depicted the great railroad bridge between Rock Island, IL and Davenport, IA.

The theater was entirely destroyed by the great fire. The house was not rebuilt after the fire. 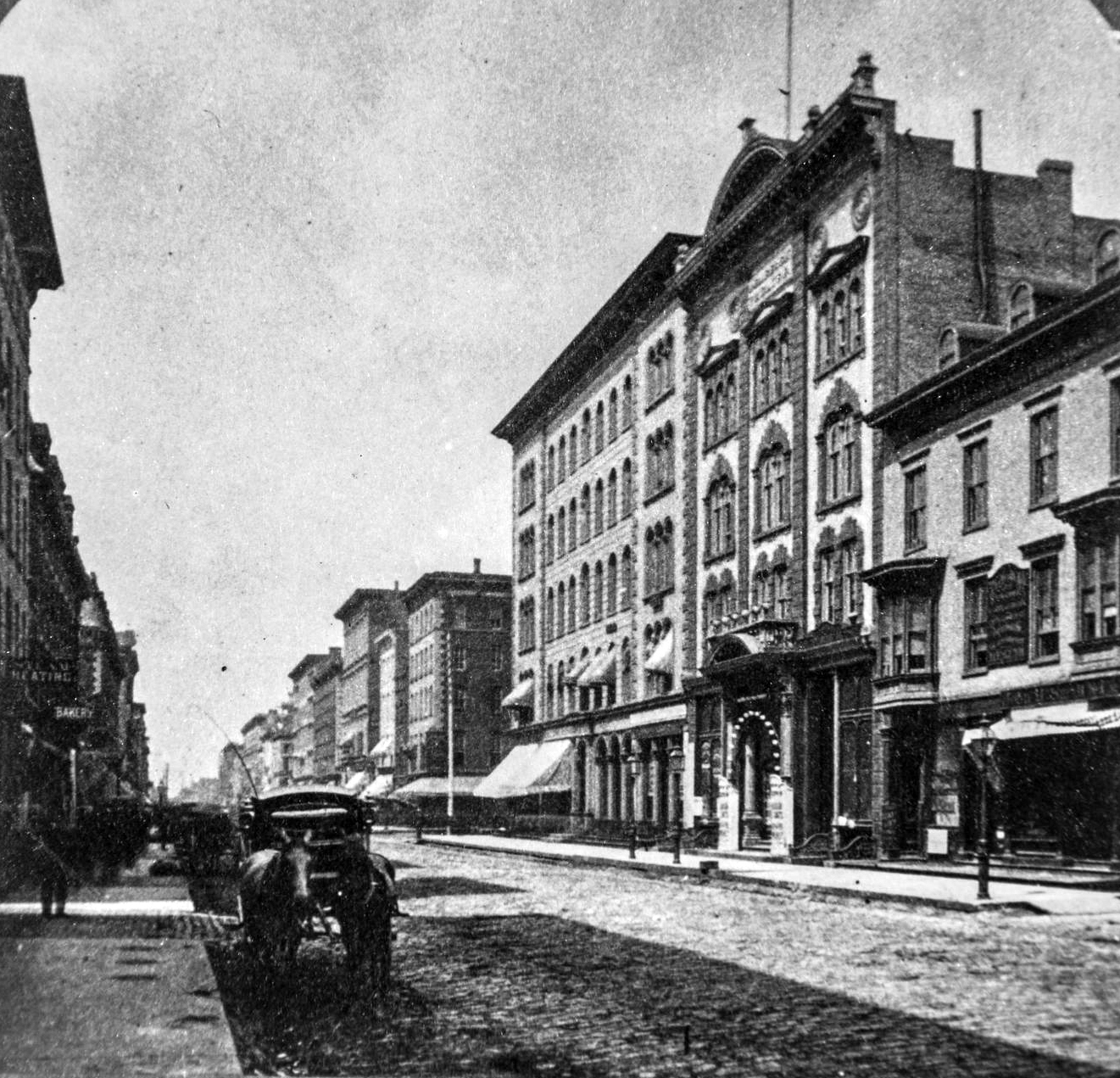 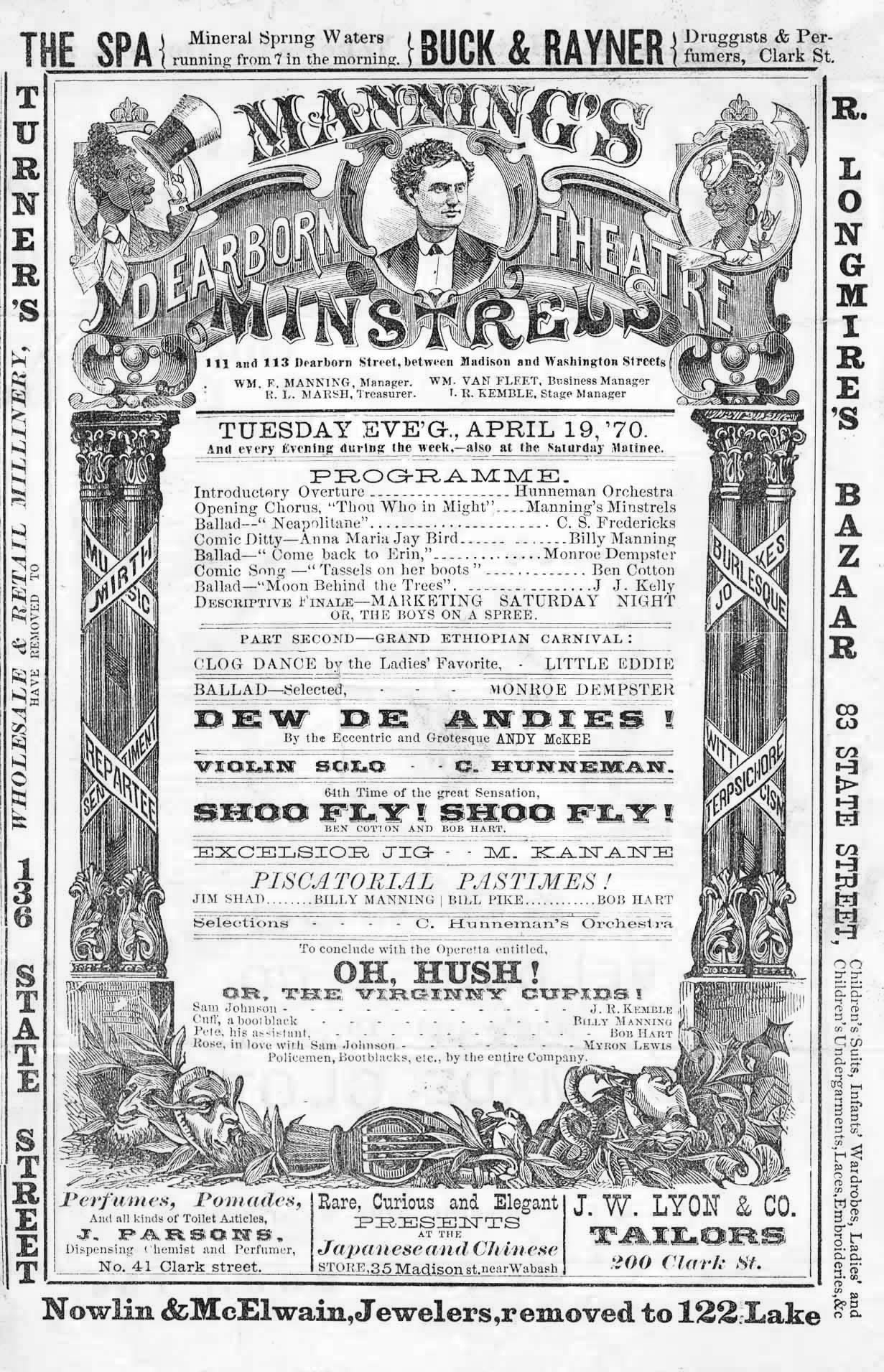