The life story of Colonel John H. Kinzie is to all intents and purposes, the history of the Fort Dearborn Settlement, the Town of Chicago, and the City of Chicago down to the close of the Civil War. From almost the dawn of the Nineteenth Century until June 21, 1865, he was almost constantly identified with Chicago, and was one of its most tireless builders. 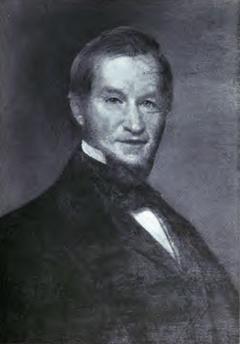 He was born on July 7, 1803, at Detroit, where his mother was visiting relatives. His father was the famous John Kinzie, fur trader, friend of the Indians, and connected with Chicago from the earliest days. His mother was a widow of a British army officer, Mrs. Eleanor Lythe McKillip Kinzie.

John Kinzie brought his family, including the year-old John H., to Chicago in 1804, when Fort Dearborn was just being completed. The family home was on the north bank of the Chicago River almost opposite the fort. There his boyhood was spent. There he got his earliest schooling taught by his cousin, Robert Forsyth, from a spelling book which had been enclosed by mistake in a shipment of green tea, that had been sent recently from Detroit.

When young Kinzie was only nine years old he witnessed the tragic Fort Dearborn Massacre. That the entire Kinzie family did not fall victims was due to the friendship of some Indian chiefs who, knowing that the troops and settlers were doomed, took the Kinzies in a boat and guarded them on the lake, later paddling around the south shore and landing them at St. Joseph River, Michigan.

The family was taken to Detroit, but returned to Chicago in 1816. Two years later, when he was sixteen. young John H. Kinzie was bound out by his father to the American Fur Company to learn trading, and for five years he served, learning the ways and language of the Indians and becoming an expert merchandising man.

The knowledge was of great use to him and to Chicago in later years. He compiled a grammar of the Winnebago language, and later of the Wyandottes. He was familiar with the dialects of the Ottawas, Pottowattomies, Chippewas, Sacs, Foxes, Sioux, and other tribes.

He was appointed private secretary to General Cass in 1826 and accompanied a delegation of Winnebagoes to Washington to visit the president. He became “superintendent” of the Indian tribes of the north division, and later the Indian agent to the Winnebagoes. 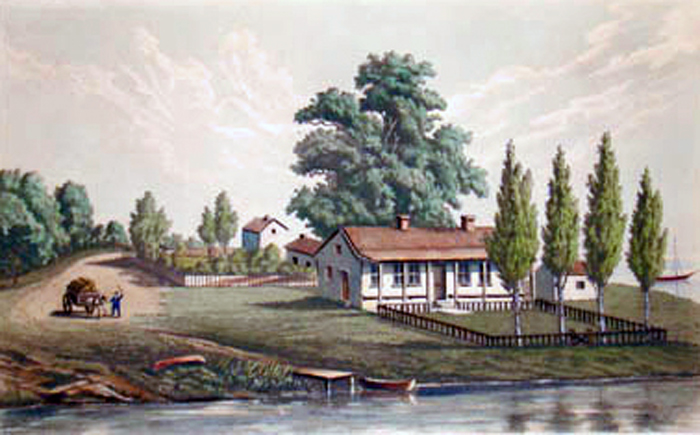 He made his permanent home in Chicago in 1834, the year after Chicago was incorporated as a town. President Harrison made him registrar of public lands in 1841, and President Taylor in 1849 made him receiver of public moneys. Joining the Union Army in 1861, he was made paymaster.

Mr. Kinzie was married on August 9, 1830, to Miss Juliette A. Magill of Middletown, Connecticut. They made their home at the northeast corner of Cass Street and Michigan Avenue. There were four children: John H. Kinzie, Jr., killed in battle in 1862 while serving on a gunboat; Arthur, who served in the Chicago Light Artillery, and later in the cavalry; George, who entered the army and died in 1892; and a daughter, Eleanor, who became Mrs. William W. Gordon of Savannah, Georgia. Eleanor’s daughter, Juliette Gordon, was an American youth leader and the founder of the Girl Scouts of the USA in 1912.

Mrs. Kinzie, author of the famous historical work. Wau-bun, died in 1870 after taking morphine in mistake for quinine.

John H. Kinzie himself, after a long and useful life, died as perhaps he would have wished. It was on June 21, 1865, when he had obtained leave of absence from the army and was in a train on his way to the seaside to rest. A blind beggar asked for alms, and Mr. Kinzie died of heart failure while in the act of taking a coin from his pocket to relieve the blind man. 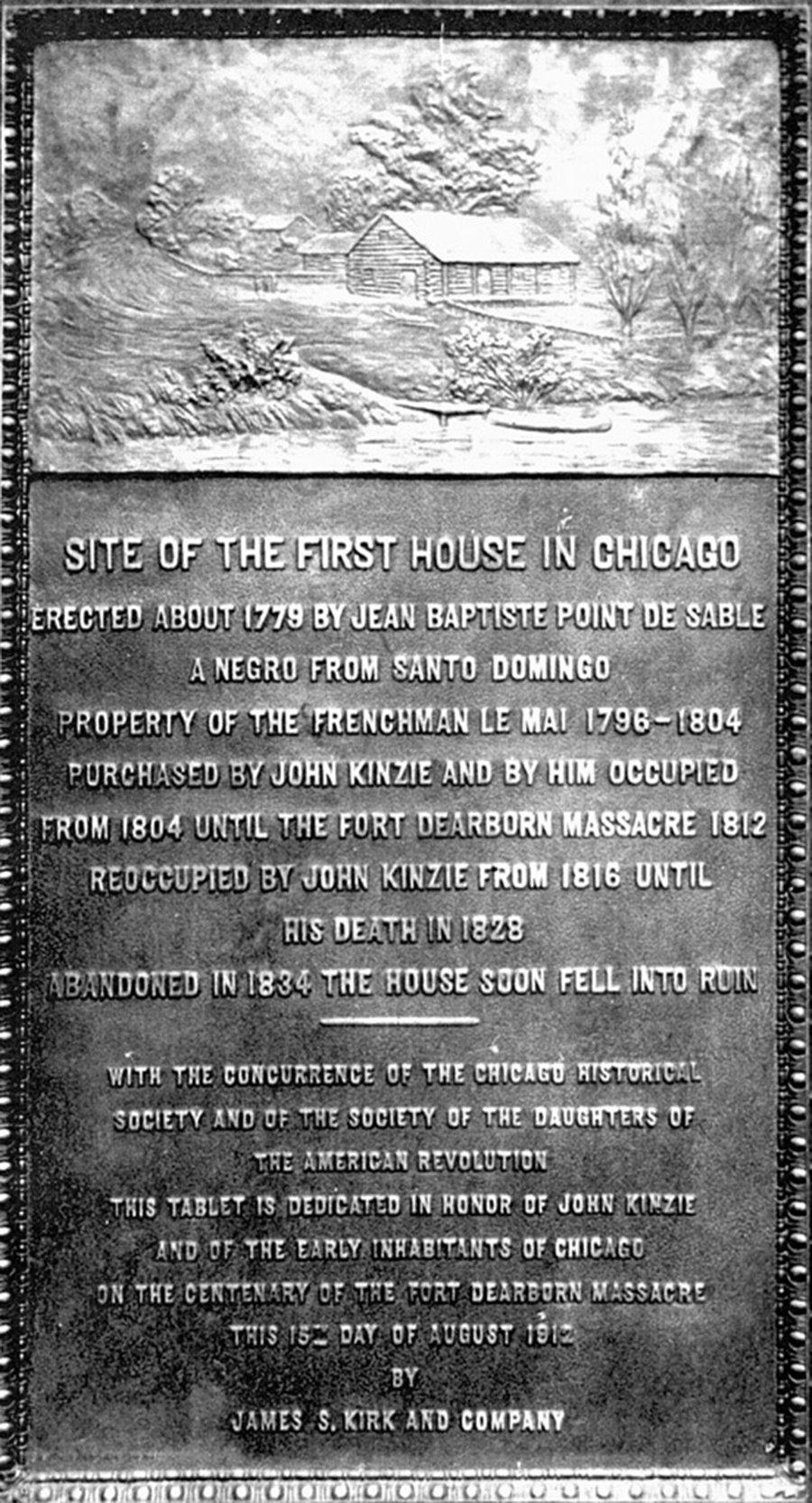 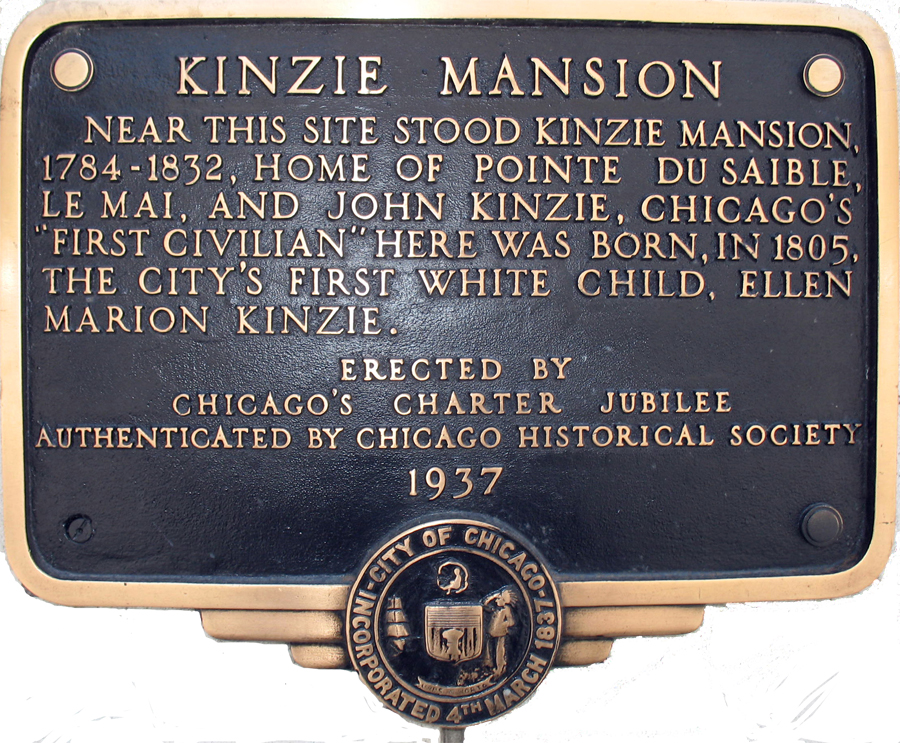 At 401 N. Michigan Avenue (Equitable Building Plaza) on the south side center pylon near the Chicago River railing

First Child and First Bride.
Ellen Marion Kinzie, born under the roof of the old John Kinzie house, in December, 1804, was the first white child born in Chicago. Her early childhood was spent with Indian playmates, but later the little maiden was taken away to escape the dangers resulting from the hostilities of those times. She later returned to the city of her birth, and on July 20, 1823, became Chicago’s first bride, when she was married in the old home to Dr. Alexander Wolcott, who was Indian Agent. Dr. Wolcott died in 1830, and about six years later the widow was married to George C. Bates in Detroit. he died there on Aug. 9, 1860.