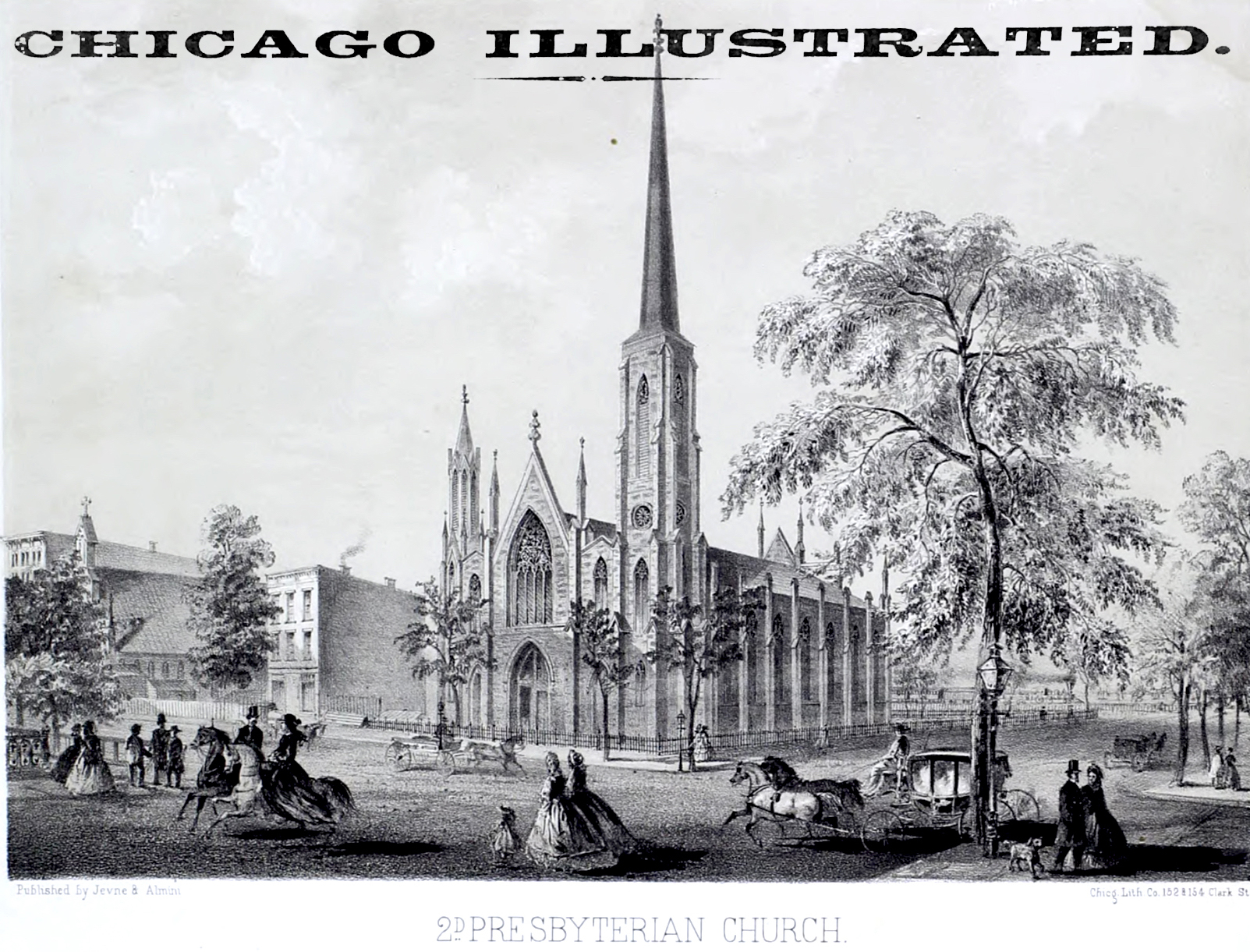 THE SECOND PRESBYTERIAN CHURCH is located at the north-east corner of Wabash avenue and Washington street, The building presents a unique appearance, and never fails to attract the attention of the stranger. A description of the mixed style of architecture is rendered unnecessary, because of the faithful portrait of the church made by the artist. A peculiarity of its structure, however, is not so sufficiently shown that a person who never saw the building would discern it, and this peculiarity is in the material of which it is built. The stone was quarried just outside of the present city limits, in the vicinity of the celebrated artesian well, and presents a remarkable appearance. The stone is popularly known as “tar rock”, for which name it is indebted to the bituminous substance which it exudes. This coloration is not uniform: on some blocks: at times, the discoloration is very dark, while other blocks will be only slightly so, and again others only present the natural gray of the limestone. So uniquely is the discoloration distributed over the building, that it has the general appearance of having been produced artificially. The general effect is very attractive, and is so remarkable that it rarely fails to live in the memory of those even who see it but once.

The design was by Mr. Renwick, of New York, though the building was erected under the superintendence of Mr. Asa Carter, an architect of this city. Its dimensions are—front, on Wabash avenue, eighty feet; depth on the line of Washington street, one hundred and thirty feet, extending to Dearborn place, beyond which is Dearborn Park. The main or south tower is one hundred and sixty-one feet high, the north ore is sixty-four feet. The body of the church is sixty-four and a half by eighty-two and a half feet. It will accommodate eighteen hundred persons, and is lighted by stained glass windows. There is a lecture-room adjoining the church, which is used as a Sunday school, and for business meetings of the congregation. The church is provided with a very fine organ, which, as it now stands, cost over five thousand dollars. The building was projected and commenced in 1848, and completed in 1852. At that time labor and building materials were to be had at comparatively insignificant prices, and the edifice was erected and completed with bell and organ, for the moderate cost of forty-five thousand dollars.

Chicago at that time was young in its march of prosperous and magnificent growth. At that time there were but few streets that were improved, even to the extent of planking. Now the Second Presbyterian Church is but one of a large number of church edifices, whose towers and spires mark Wabash avenue for miles beyond what was considered a remote part of the city.

Previous to the completion of this building, the congregation, then a very small one, worshipped in a frame tenement on Randolph street, in the neighborhood of the Court House. The congregation was organized in 1842, and the Rev. Robert W. Patterson, D. D. accepted the call, and has continued as its pastor to the present time. The congregation has increased from that time, until it now numbers about eight hundred members. The church is always full; that is, its membership is always equal to the capacity of the church accommodations. Five distinct swarms have taken their departure, each settling in some other part of the city, and in time erecting another large and handsome building, to be in time also filled to send forth its swarms to locate upon new sites.

The pastor, Dr. Patterson, is of what is known as the New School Presbyterians, and enjoys a reputation in Chicago and in the country for learning, ability, and personal qualities not surpassed by any other clergyman of his church. The trustees at the present time are, P. L. Yoe, Esq., W. N. Gould, Esq., John McGinnis, Esq., R. V. Page, Esq., and William Blair, Esq. The elders are the Hon. W. H. Brown, Hon. R. W. Raymond, Hon. H. F. Mather, J. C. Williams, Esq., T. B. Carter, Esq., and I. Grover, Esq.

The congregation is not only large, but of the most respectable character, including many of the wealthy families of the city. In the list of those who have occupied public position, who belong to the congregation, are the names of Senator Trumbull, Judges Higgins and Skinner, Lieutenant-Governor Bross, Ho. John Wentworth, and J. H. Dunham, Esq. The late ex-Mayor Dyer was a member of this church.

The congregation maintain a number of flourishing mission school is in other parts of the city, and are now erecting a large building for that purpose in the southern part of Chicago. 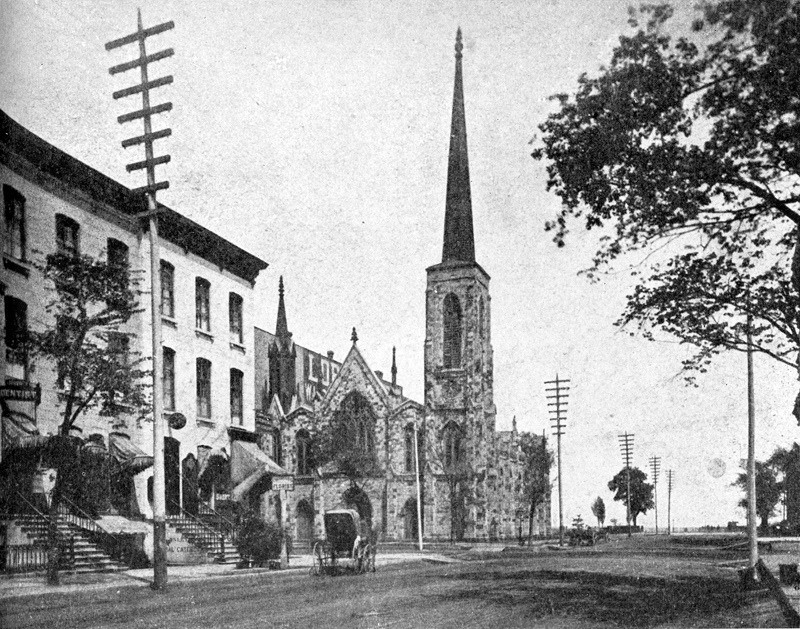 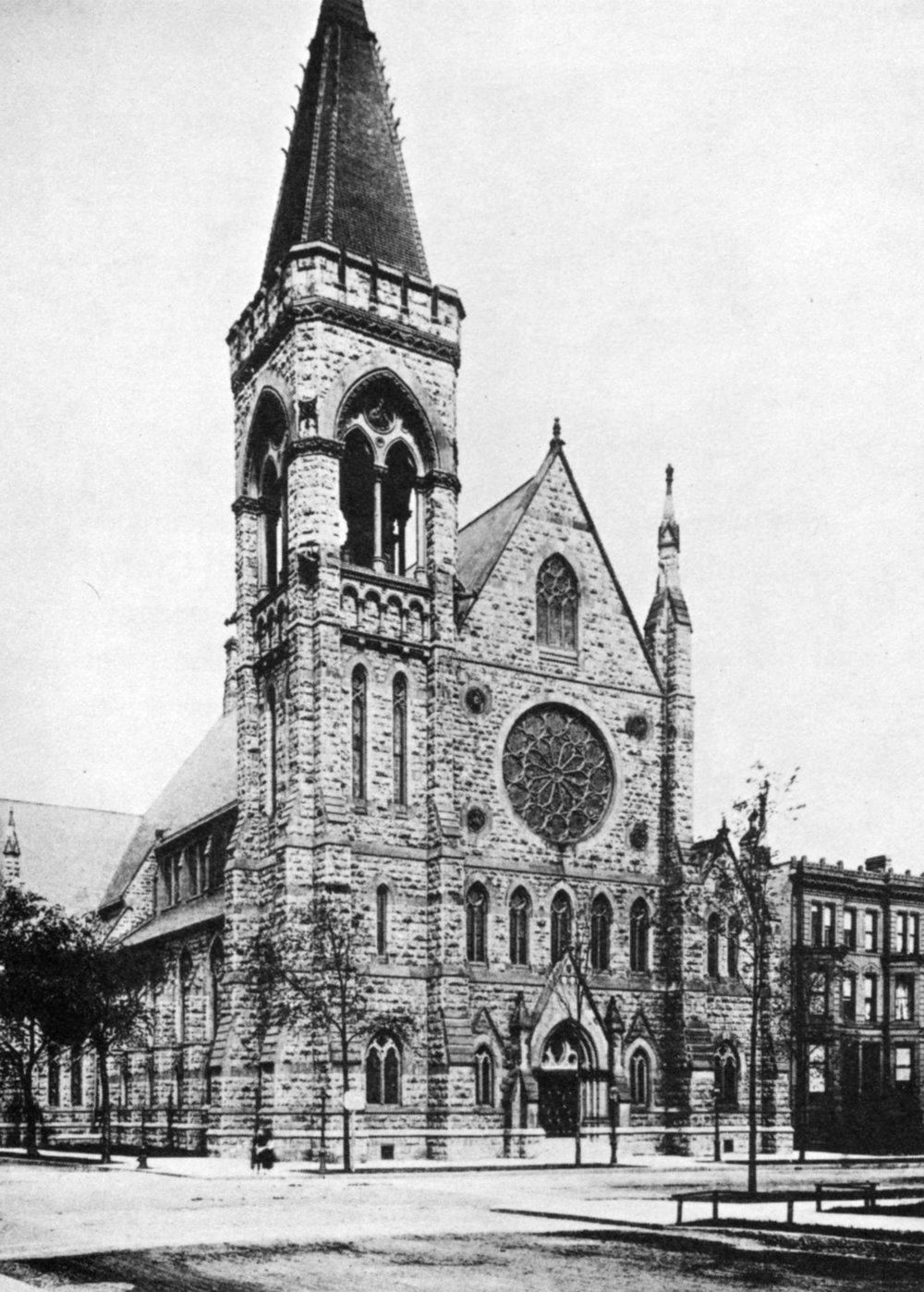 The Second Presbyterian Church was built of grey oil stone in 1852. Its architect was James Renwick, the designer of St. Patrick’s Cathedral in New York and of “The Castle,” the original building of the Smithsonian Institution in Washington.

The growth of the membership of this Church in 1858 was especially memorable, there having been added to the church-roll nearly one hundred persons, making a total of five hundred and eighty-seven since the organization of the Church. The church-building, on the corner of Wabash Avenue and Washington Street, was regarded at that time as one of the finest in the West. It was constructed of bituminous limestone, and was known as the “spotted church,” on account of the exudations from the stone of the dark-colored, crude petroleum. By the profane, it was known as the “Church of the Holy Zebra.”

Like Crosby’s Opera House, it was lost in the fire. Unlike Crosby’s, it was rebuilt, though not in the same place. It moved to its current site at 1936 South Michigan, close to the Prairie Avenue neighborhood where several of its wealthy parishioners lived. 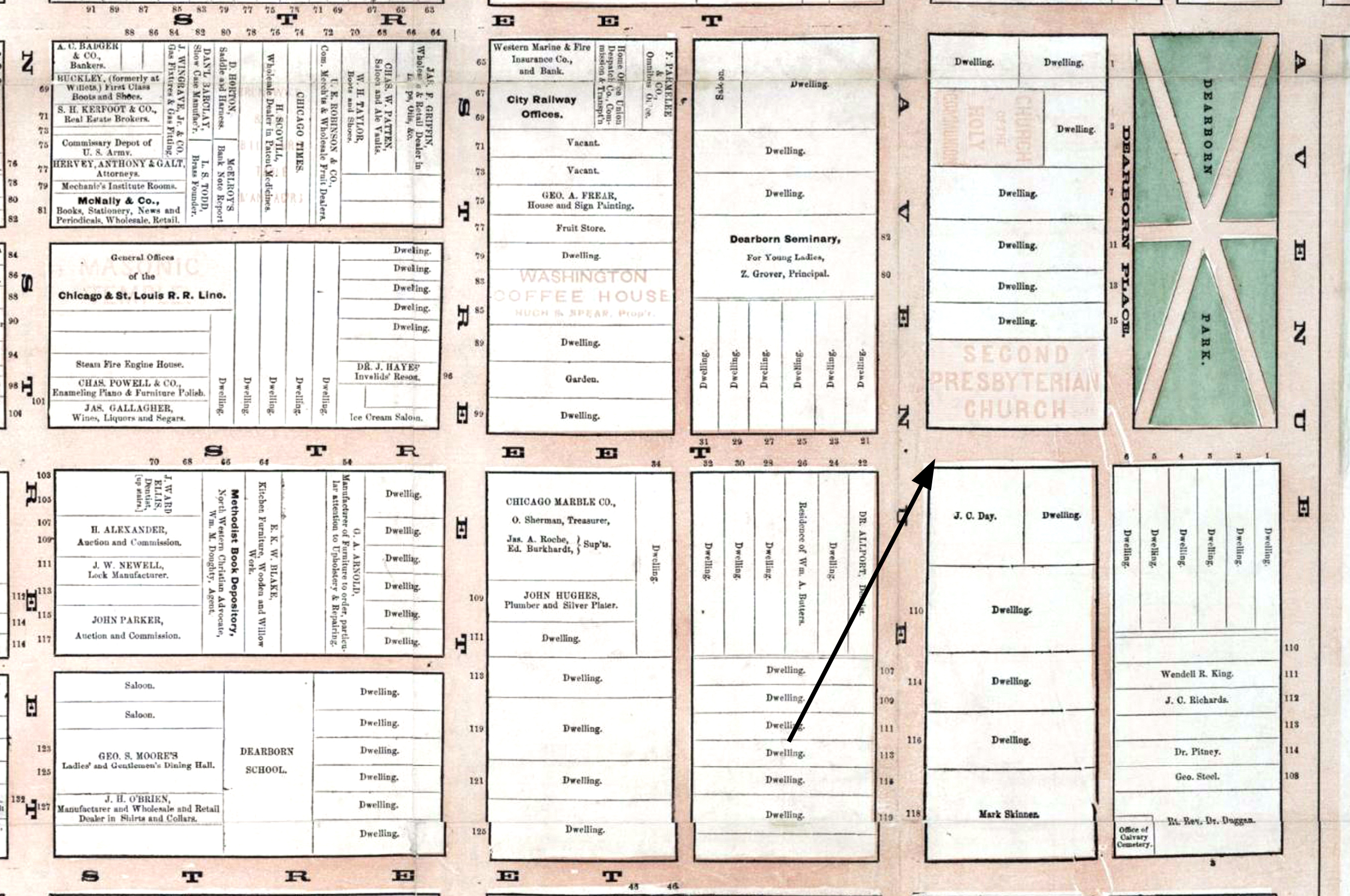