The First Sherman House.
The City Hotel, subsequently the Sherman House, was built in 1836-37 by Francis C. Sherman. Jacob Kussel was its first proprietor, taking possession in December, 1837. In 1844, Mr. Sherman remodeled the house, added two stories, making it five stories high, and changed its name to the Sherman House. Two years later Mr. Russel retired from its management and was succeeded by James Williamson and A. H. Squier; the next year Mr Williamson retired from the firm, William Rickards purchasing his interest.

This firm, Rickards & Squier, retained the proprietorship of the house until in 1851, when they sold out to Brown & Tuttle, late of the City Hotel, a building which then stood on Lake Street, near Wabash Avenue, and was formerly the Farmer’s Exchange. In February of 1854, Mr. Brown sold his interest to A. H. Patmor, and until 1859 the firm was Tuttle & Patmor. In 1858 the proprietors were Martin Dodge and Hiram Longly.

The New Sherman House.
The process of taking down then old brick buildings and clearing the ground for the commencement of the new structure, is now being pushed forward with vigor by the contractors.

The style of architecture is the modern Italian. The fronts on Clark st. and Randolph st. will be fine rubbed Athens marble above the store fronts. 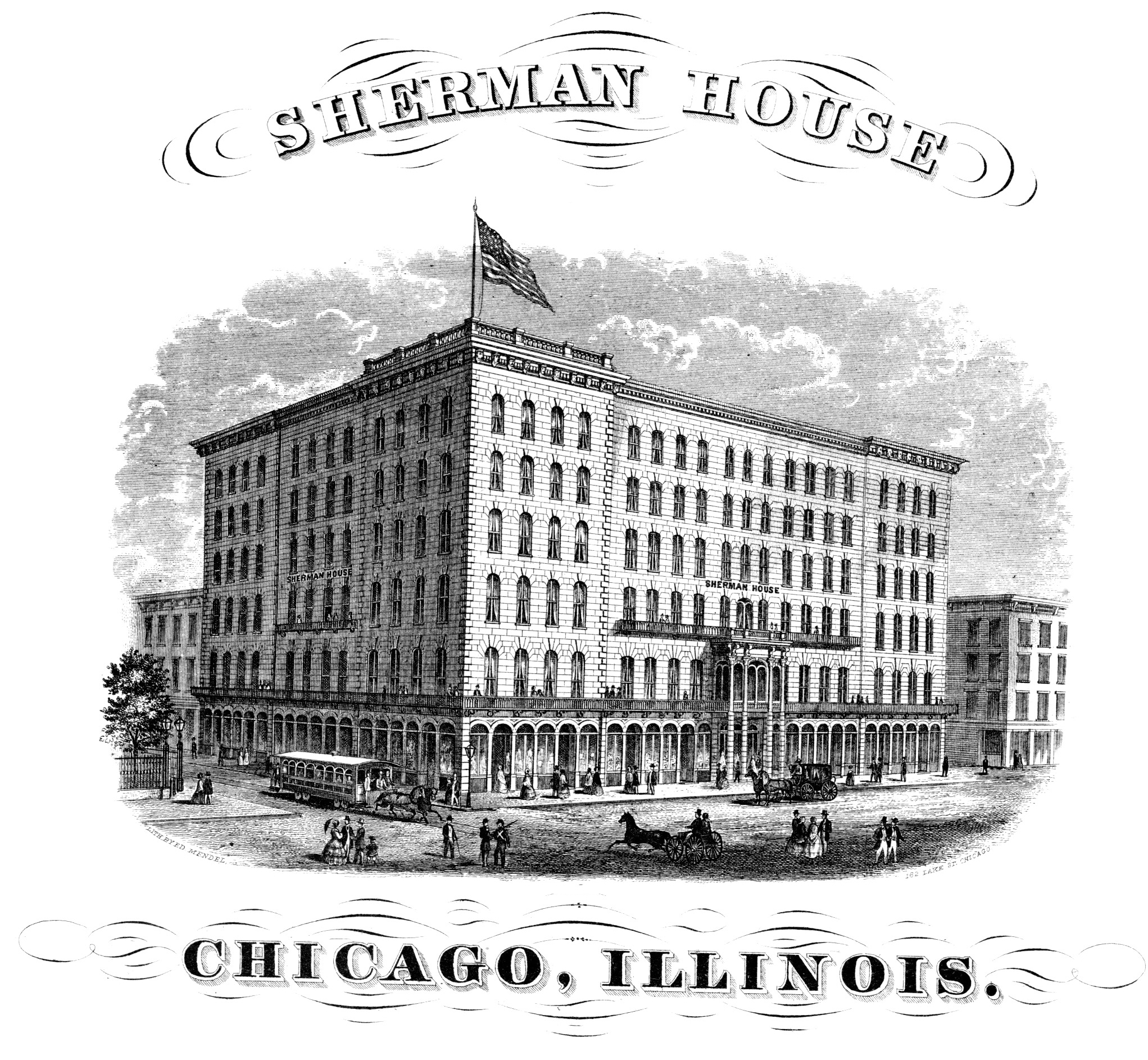 The basements will all be stone, with stone area steps leading to the basement. The sidewalks will be flagged with large stone flags, under which, the space will be devoted to coal vaults & c., for the use pf the stores and basements. The store fronts are to be open show windows, plate glass, divided by cast iron columns of the latest pattern with ornamental arch tops. As every 40 feet of the store fronts there will be large rustic stone piers.

The main entrance to the hotel will be on Clark st., twenty feet wide, and two stories high, which is finished with a large portico, supported by four large marble columns. This entrance, as well as the one on Randolph st., is to be finished with marble stairs and floors leading to the main reception halls, all of which are to be tiled with marble. The Registering counter, which is also to have a marble top, and clerk’s office, are lighted by skylights and located directly opposite the Clark st. entrance where all the arrivals by carriages, together with baggage will enter.

On the right of the main entrance is the ladies; entrance, so that gentlemen with ladies, arriving together, can enter together, and the ladies pass into the reception room and the gentlemen pass at once to the registry desk. At the south end of the main reception hall, which is 31 by 131 feet, is a public entrance from Randolph street, more particularly calculated for pedestrians and private citizens. All these entrances are in full view of the clerk’s office, on either side of which are grand stairways leading to the upper stories, one for the gentlemen and one for the ladies. Immediately adjoining the ladies’ stairway, and near the ladies’ parlors, is an arrangement for a vertical rail-car for the purpose of conveying passengers to the upper stories. In addition to this, there are two other railways, one for carrying up baggage, and the other for carrying fuel. This last passes up through the kitchen, and will be found very useful in that department. The west portion of the building, fronting on Couch place, 63 by 101 feet, is arranged entirely for the hotel. The basement, first and second stories are devoted to the culinary department, including fuel cellars, store room, larder, ice cool room, pastry and bake room, laundry, steam boilers, and drying, ironing and airing rooms, etc., with all the necessary appendages, stairways and halls sufficient to make all parts conveniently accessible. Immediately adjoining the main kitchen, and on the same floor, which is the office floor of the hotel, is the grand dining hall, 40 by 100 feet, adjoining which is the ladies’ ordinary, 25 by 65 feet, connected with the main dining room by folding doors. At the other end of the main dining hall is a private dining or tea room, 35 by 40 feet, connected by sliding doors, so that on extra occasions all three of the dining rooms can be opened together, affording capacity for dining about 700 persons at one time. 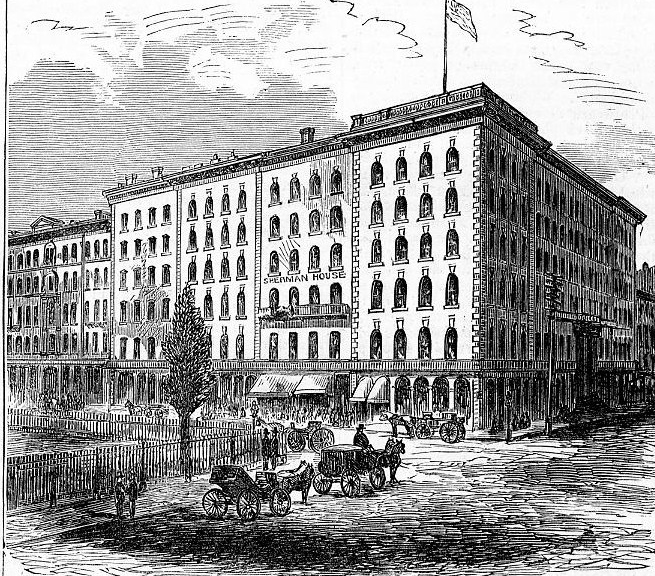 The Sherman House
Every Saturday, 1871

These Dining Halls are entered by three separate halls, each wide and spacious, leading from the main reception Hall.

In front of these apartments, on Clark street, and Randolph street, are the Public Rooms of the Hotel, Gentlemen’s and Ladies’ Parlors, Reception Rooms, Writing and Reading Rooms, Chess Room, Private Office, Private Bar Room, Baggage Room, Wash Room, and Entrance to Water Closet building, which is a separate round building in the hollow square or open court. The said building is to be five stories high, and made accessible from the different floors, divided proportionately for gentlemen, ladies, servants, and for the stores, all the different apartments being entirely separate on the different floors.

The private parlors on each floor are arranged with connecting chambers with dressing and bath rooms attached, and every desirable convenience.

The second floor of the Hotel is divided mainly into suites of private parlors and bed rooms, all of which are large and thoroughly ventilated. The main halls are 10 feet wide, and the others 8 feet wide, which extent to the outside walls, admitting light and a full draught or air. In addition to these and other modes of ventilation, there are large registers located in the floors and ceilings at different places of the several halls from the the first floor to the top and out to the roof.

From the main hotel floor there are four commodious flights of stairs leading to the upper stories of the house. The third floor is divided mainly like the second. The fourth, fifth and sixth are divided into smaller single rooms, which are well supplied with water and conveniences fir heating every room. Most of the rooms on the several floors are united by doors, so that two or more rooms can be used together if desirable.

The seventh story over the west portion, on Couch Place, will be used for servants’ rooms.

On the sixth floor there will be two large reservoirs for water, to supply the Hotel, which are supplied with water by force pumps.

There will be an arrangement at different places on each floor for attaching a hose in case of a fire in any part of the building.

The arrangements for cooking, heating, and washing are on a liberal scale, and steam will be used extensively for all these purposes. There are 300 rooms in the hotel portion of the building, all well lighted and thoroughly ventilated and warmed. There are 11 stores and 11 basements, fronting on Clark and Randolph streets.

In the erection and furnishing of the building the following details have entered: 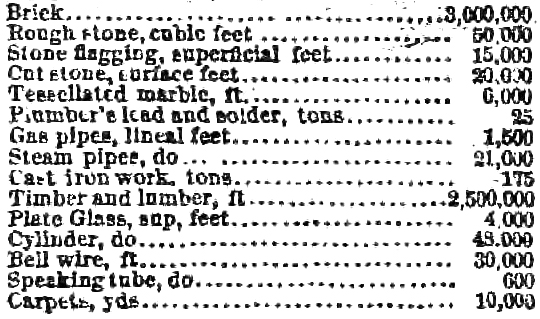 The contracts for the heaviest portion of the works have been awarded ton the following persons or firms, viz: 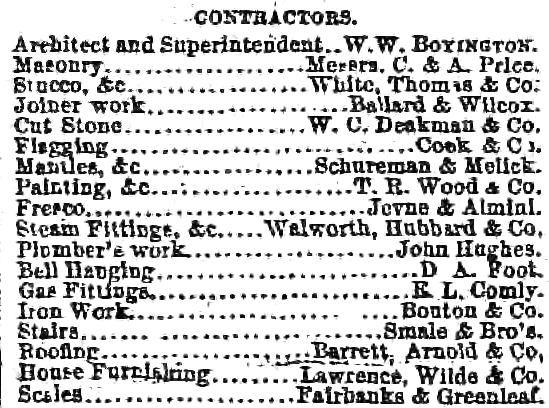 The cut stone work and cast iron work are already nearly completed. The erection of the building will be commenced as soon as the ground area can be cleared, and progress as fast as the safety and permanency of such a work can be executed, all of the same to be done in the most thorough and permanent manner.

THE NEW SHERMAN HOUSE.—Most obviously it should have been stated, in connection with the elaborate sketch of the new Sherman House, published in our last issue, the architect of the noble edifice is W. W. BOYINGTON, Esq. By a revoking inadvertence this omission made our account thus far incomplete. We make the correction less forMr. Boyington’s sake than ti fill out the item of news just now deservedly prominent, as referring to an enterprising of a class and nature which is both to do honor and prove of a sterling service to our city. As an architect in Chicago, Mr. Boyington may well borrow from Sir Christopher Wren, “Si monumentum quaeris,: &c., or literally translated, if you wish to know what I have been about, look at Michigan Terrace, the new Sherman House, and blocks on blocks of marble stores and first class dwellings by the score. Mr. Boyington is a modest man and does not say all this, but the buildings themselves speak for him.

The superb new Sherman House will prove an honor alike to Hon. F. C. Sherman, and to those to whom he was entrusted its erection.

Excerpted from The Chicago Tribune, July 8, 1861, which was the day after the Grand Opening of the Grand Opening. The lengthy article included a nearly identical description of the new hotel. Additional details are as follows:

Now we come to the live occupants and managers of the establishment, and we have done. Perhaps ere this our readers have already deserted us. We think, however, they will follow us to the ending if learning, as we shall assure them, that the Sherman is in adequate hands.

Messrs. Roberts & Sherman, the latter a son of the proprietor, are the lessbes. P. B. Roberts is a successful railroad man, recently from Peoria. They have connected with its management Samuel Hawk, Esq., late of the Richmond, who can keep a hotel, and W. S. Hughes, of liberal and successful experience in the same direction, in hotels of Cape May and Philadelphia. These gentlemen are assisted by Messrs. Kellogg of Peoria,and Rice of Albany.

So passes into its place in history, and into its rank among the institutions of this city, the new Sherman House. Long may it wave. 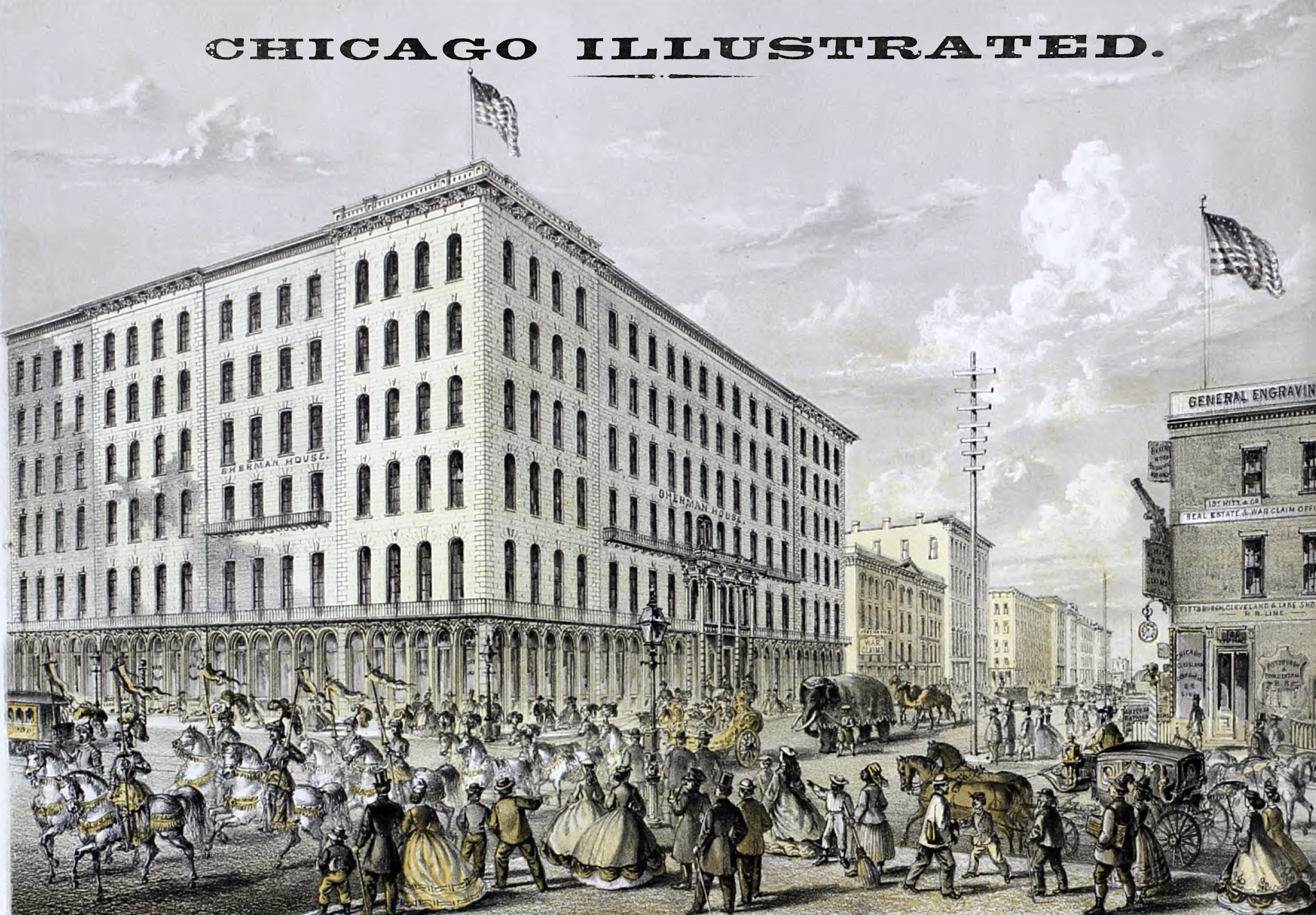 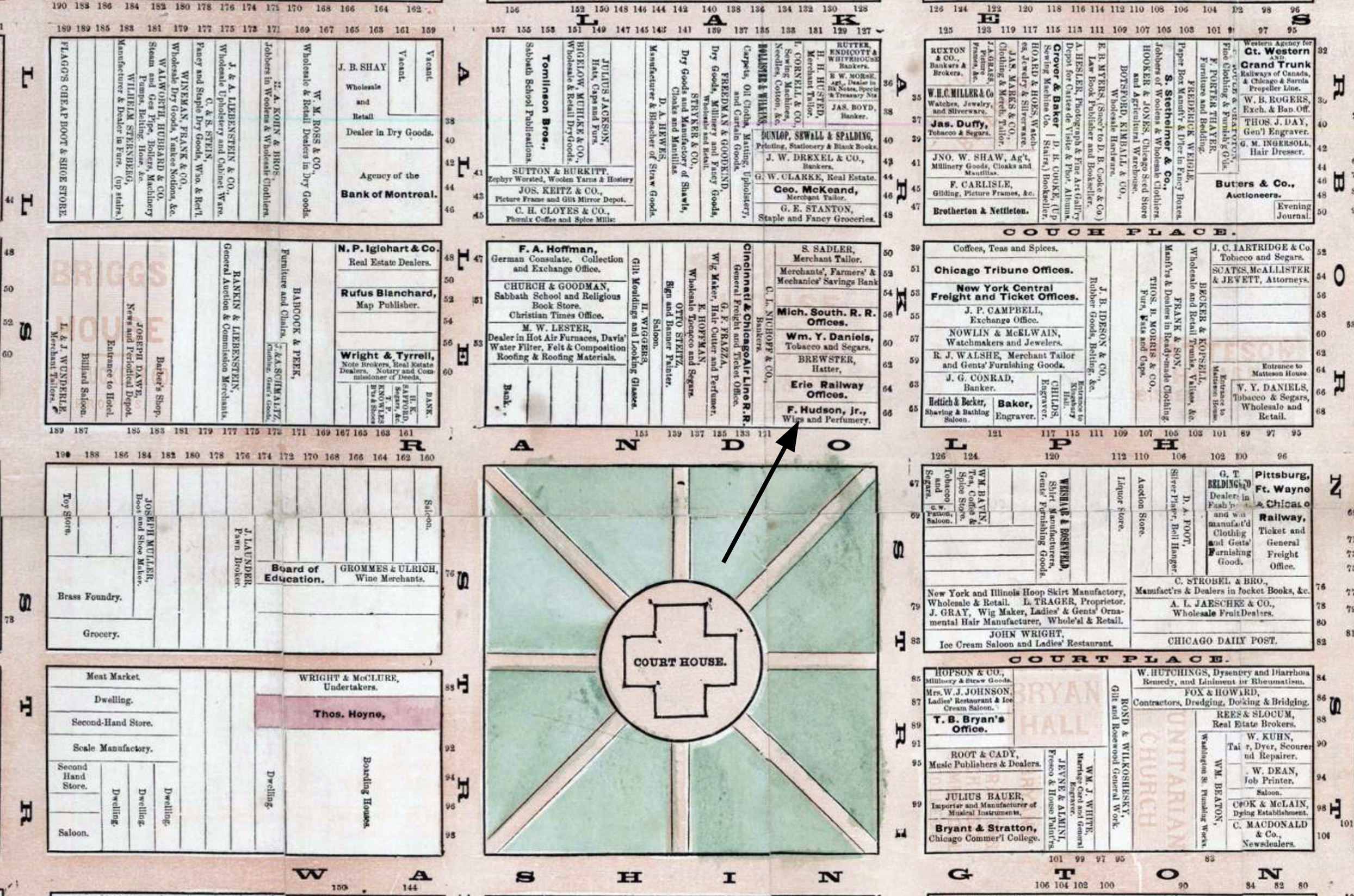 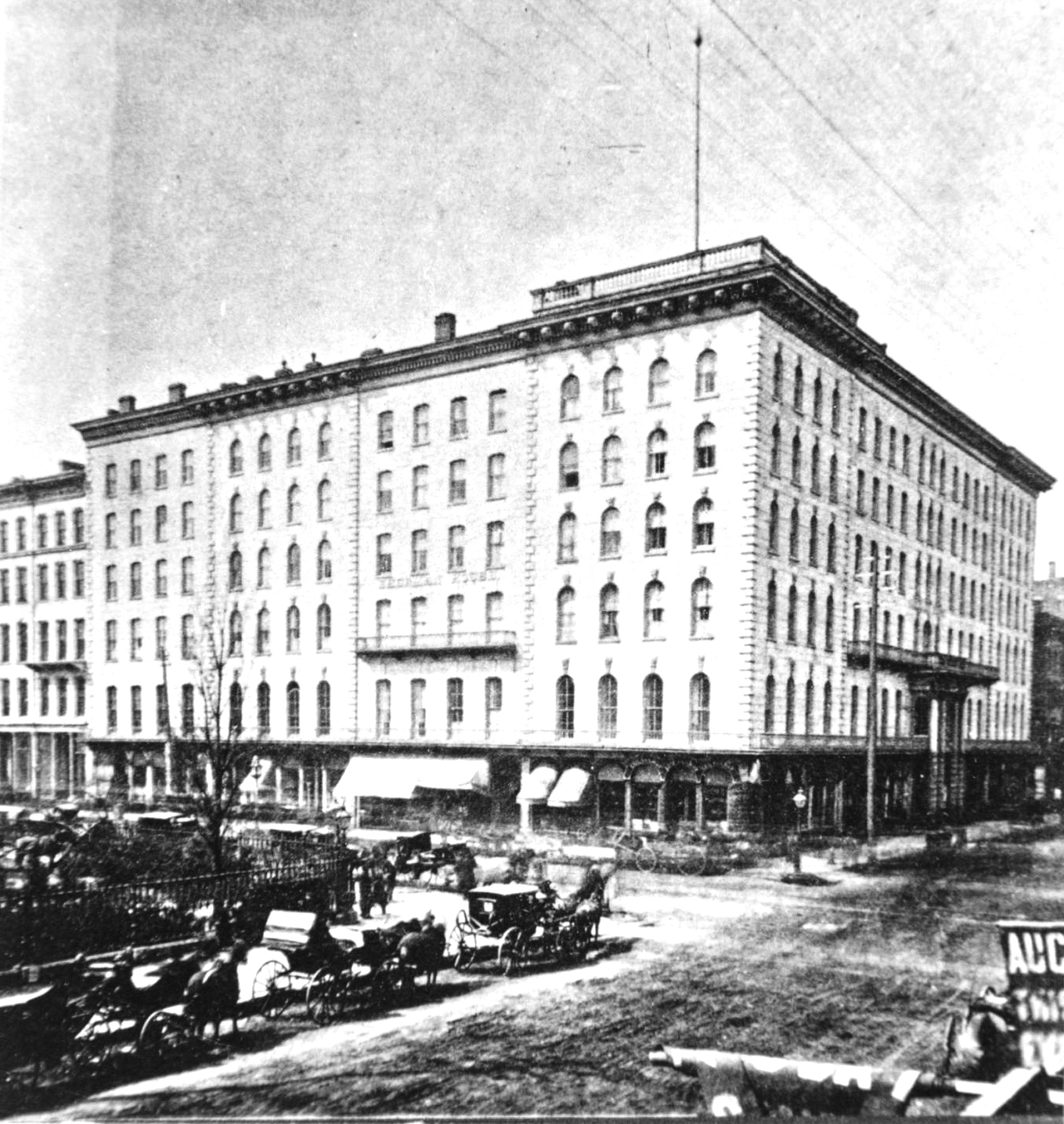 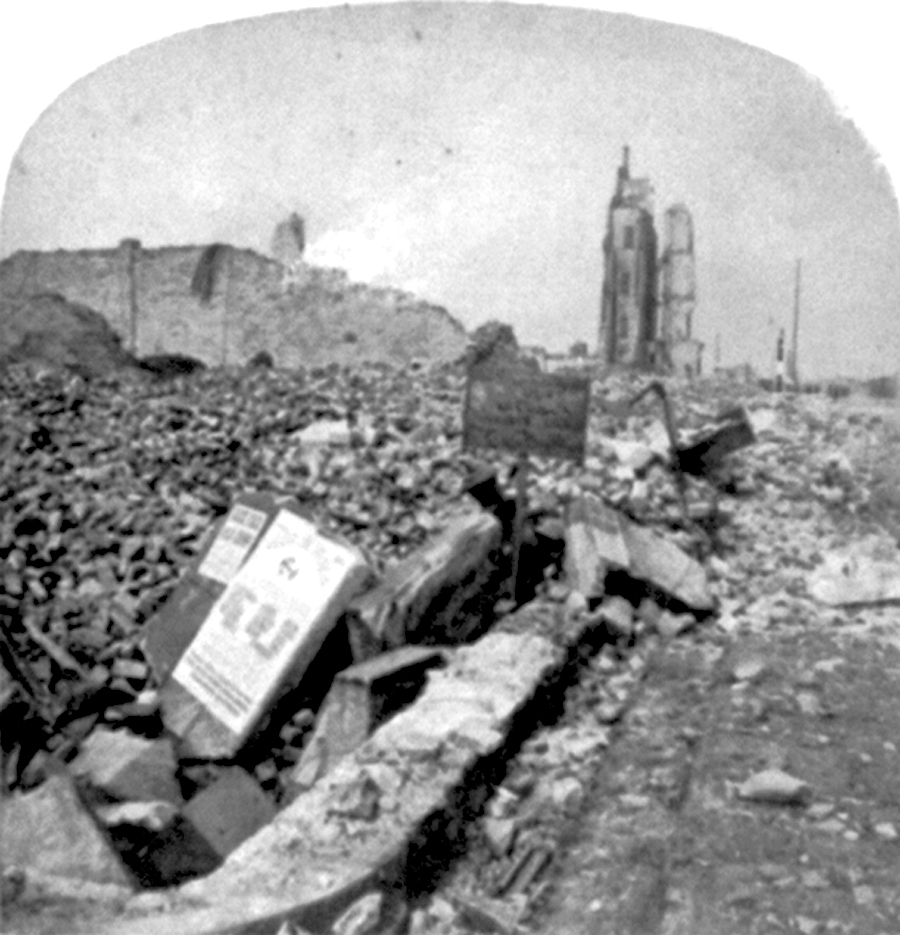