New Hotel.
A new hotel is being fitted up at the corner of Clinton and Madison streets, with all the modern improvements, and containing 100 sleeping tooms. It is located in a very central point for railroad custom, and offers a good chance for an experienced hotel keeper to establish a successful business. The proprietors will offer liberal terms as will be seen in the advertisement in another column. 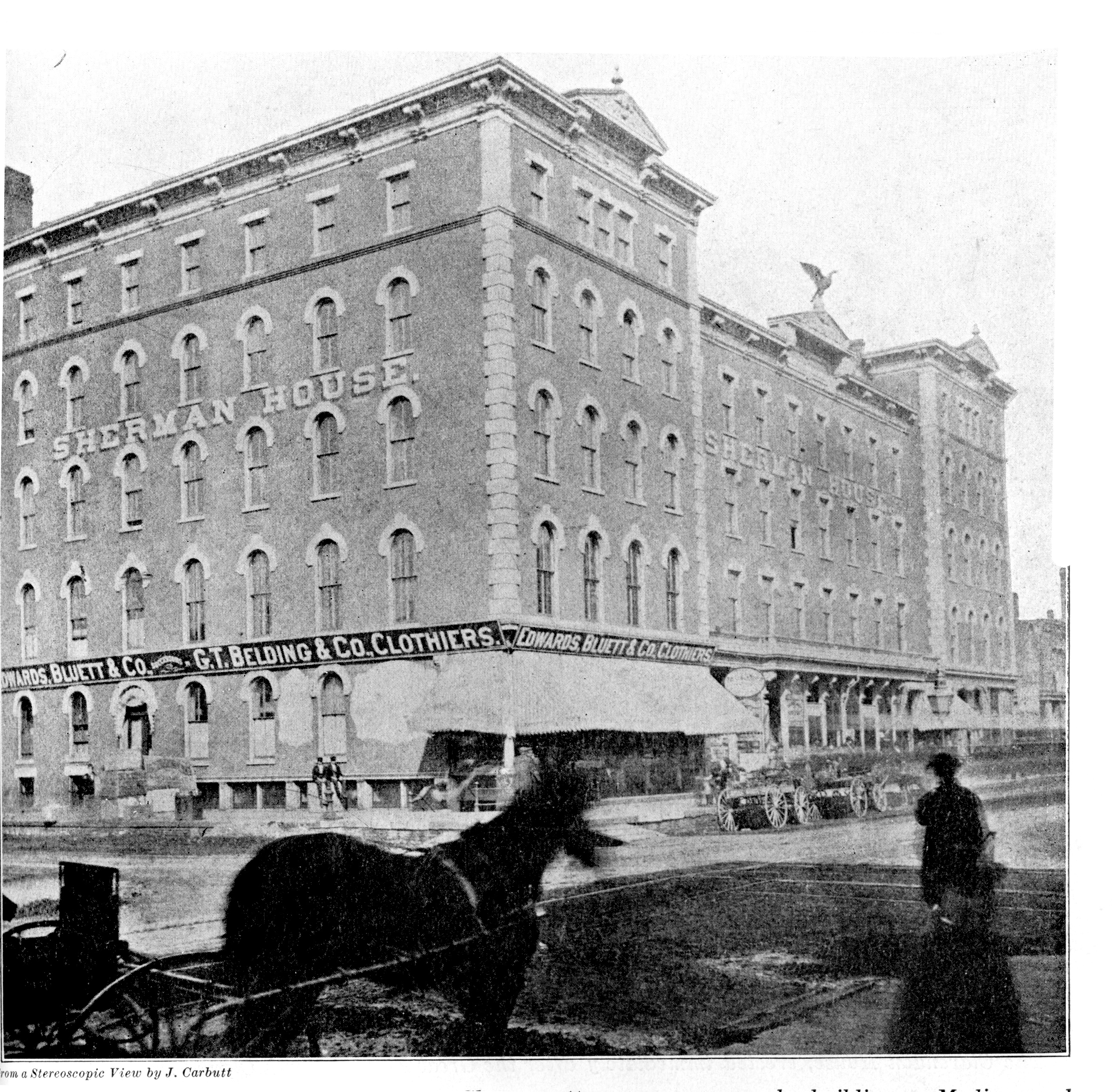 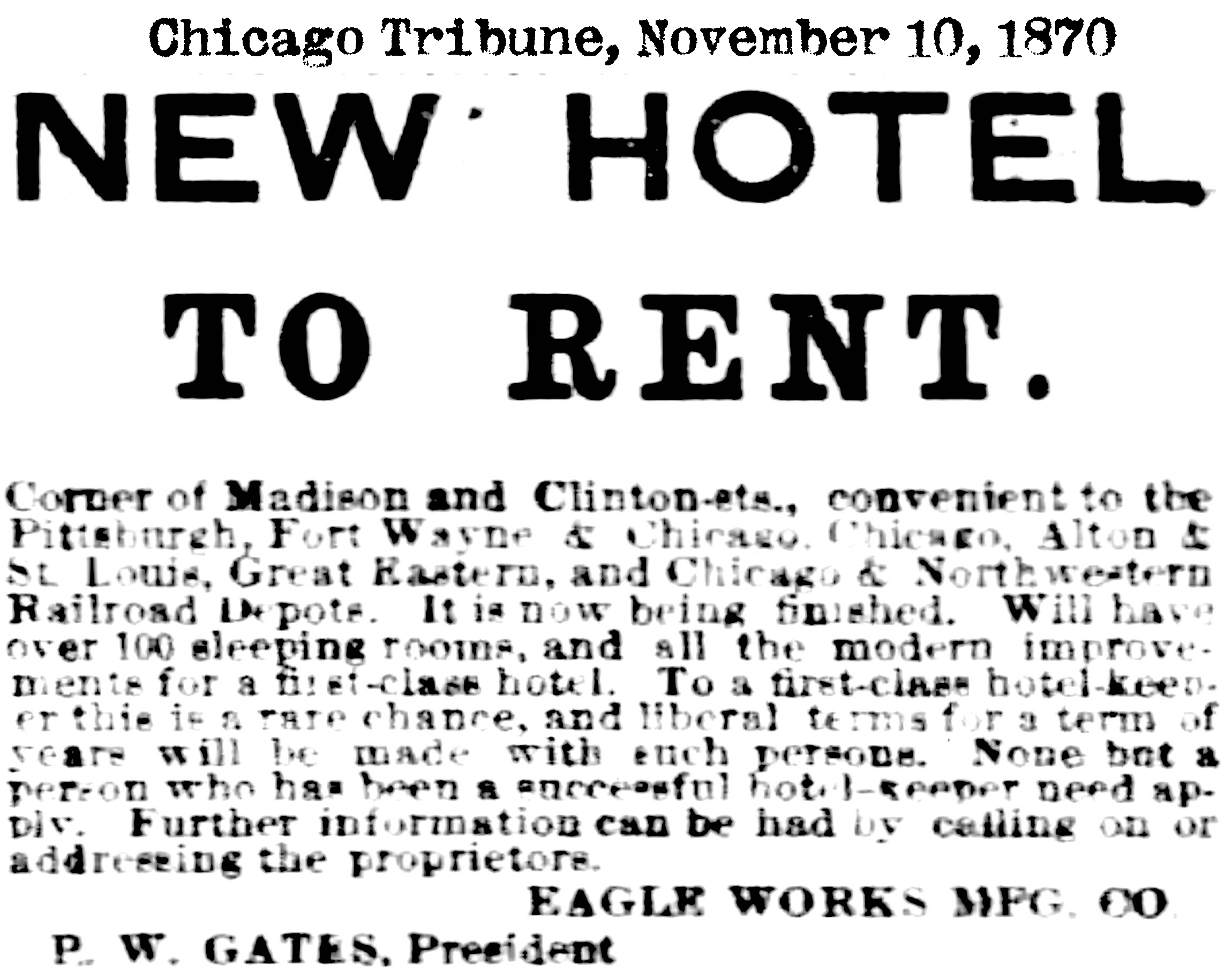 The New Sherman House, Chicago, For Sale
The owners of this property, Messrs. Gage Brothers & Rice, having leased the Pacific Hotel, now under process of erection, offer the above property for sale, with immediate possession, or with possession any time between now and March 1, 1872. If purchased within a reasonable time $100,000 can be realized in net earnings before any first-class house now erecting can be completed.

The location of this property, corner of Madison and Clinton streets, is an unusually favorable one for hotel purposes, not only for the next year, but for all future time, being located only one block from the depot of the Pittsburgh, Fort Wayne & Chicago Railroad, Chicago, Alton & St. Louis Railroad, and (early the coming fall) the Chicago, Milwaukee & St. Paul Railroad, and very considerably nearer to the Chicago & Northwestern Railroad and all its branches than any other first-class hotel in the city, and with one exception nearer the old business centres—such as the Court House, Board of Trade, etc., and it is several blocks nearer than any first class house now opened, or contemplated, to the new and permanent business centre created by the location of such concerns as J. V. Farwell & Co., Field, Leiter & Co., Hamlin, Hale & Co., C. P. Kellogg & Co., H. W. King & Co., and others, Composing the largest firms in our city The building was completed the past season, and is very substantial and imposing structure, as will be seen in our illustration, built in modern style, of pressed brick, with stone trimmings, covering the entire lot, 152 feet front on Madison street, by 90 feet in depth on Clinton street.

Five stories in height, with two half stories additional on either end; 125 rooms in hotel hotel portion. In business portion, eleven stores, 3 of which are double. To any person contemplating or familiar with hotel keeping, the purchase of this property offers an inducement to step in a permanent and paying investment that seldom occurs. Terms of sale very favorable. For further particulars, address C. R. Field & co., Room 1, Kent’s Block, Chicago, Ill.; or, R. R. Jones, 705 Walnut street, Philadelphia, Pa., for Pennsylvania and the Southern States. 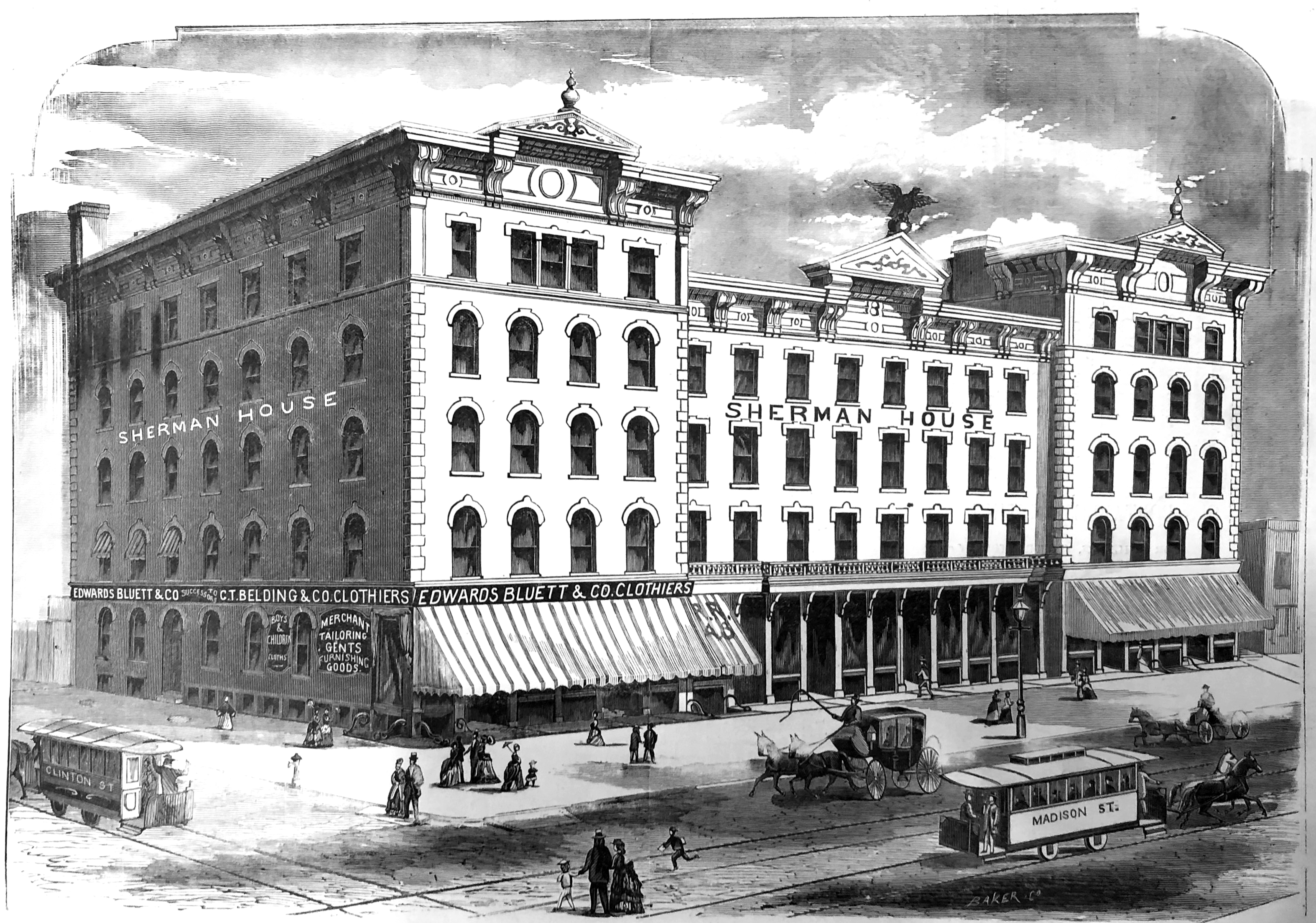 The sale of the Sherman House property, corner of Clinton and Madison, to Messrs. Gage & Rice, 90×150 feet, for 875,000, is the largest real estate transaction that has come to light for several weeks. 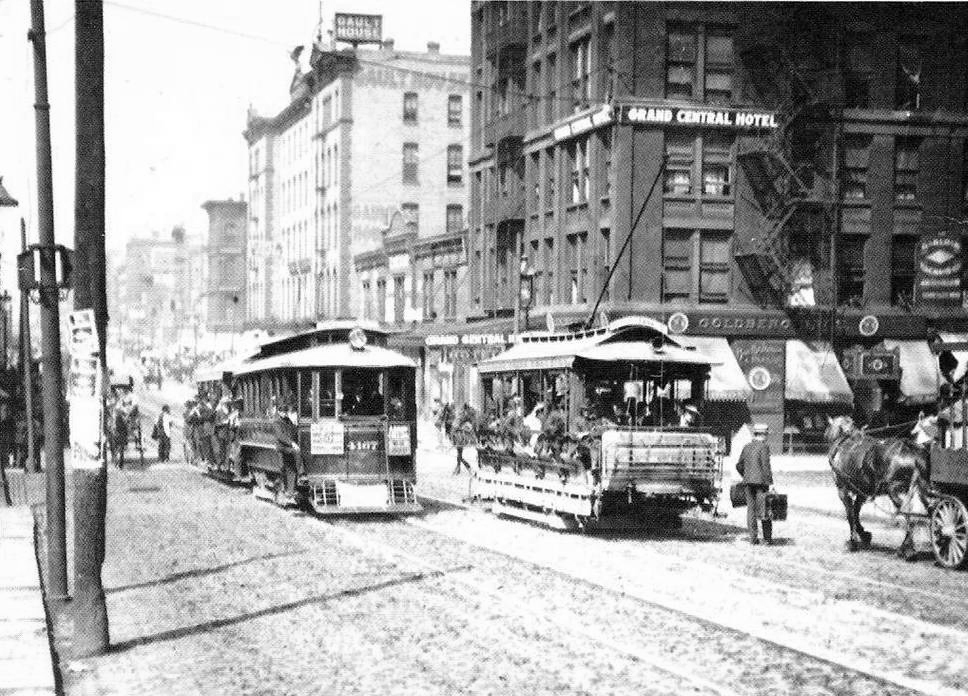 The Gault house, the oldest hotel in Chicago, at Clinton and West Madison streets, was bought yesterday by Myron Pearce. The consideration named in the transfer was $150,000. The property will be improved by a $25,000 addition to the present building. John Irving Pearce, a brother of the new owner, will be manager of the hotel.

The Gault house is a historic hotel of Chicago, being the only hotel which was not destroyed in the Chicago fire of 1871. The day following the fire the hotel was put up at auction, all the hotelkeepers of the city bidding for it. It was secured by Gage and Rice, who in 1874 erected the present building.

It is said the railroad only will acquire the land to the south of Madison street, extending west to Clinton street. 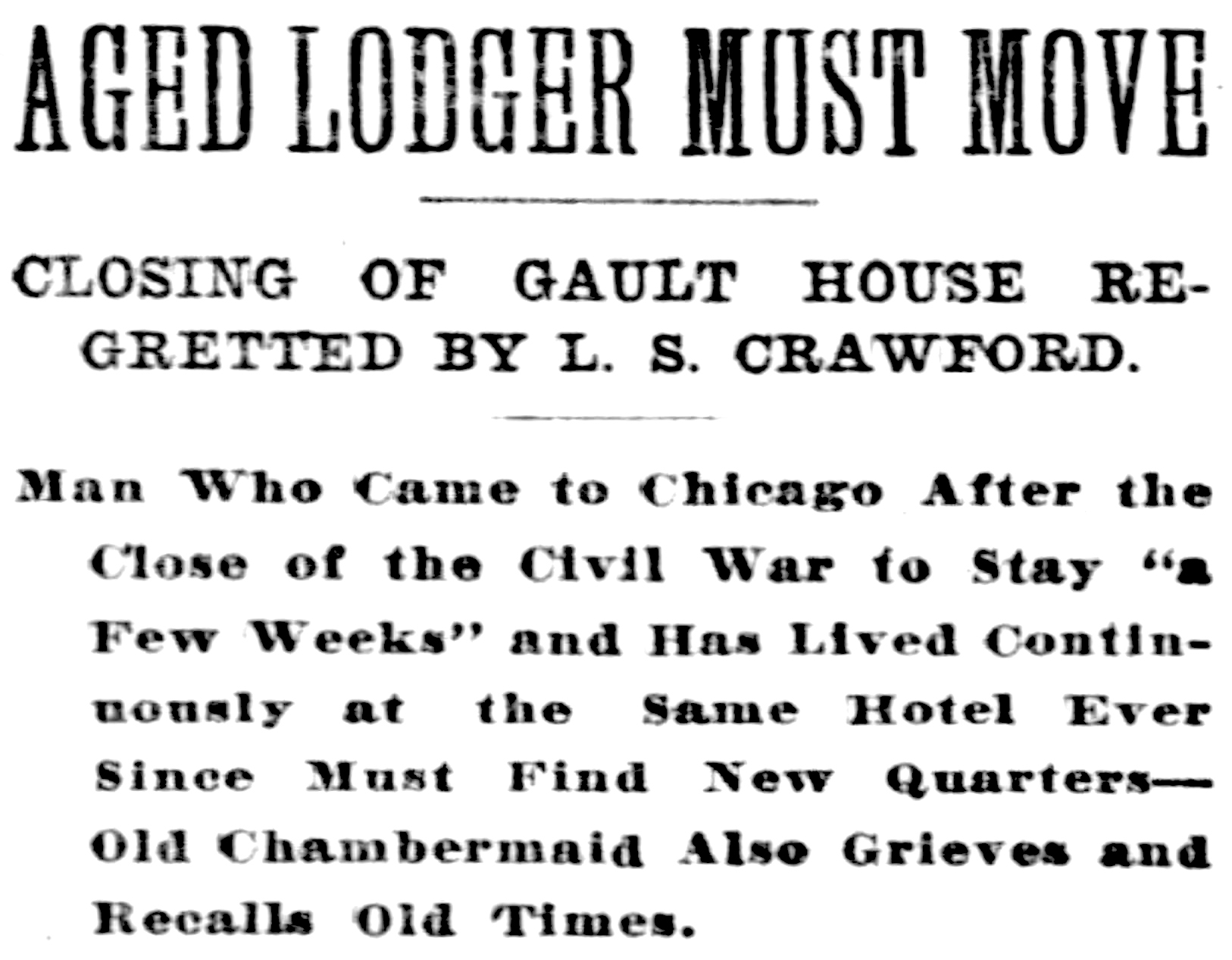 The Gault House, on West Madison street, “just across the river,” Chicago’s oldest hostelry since the passing of the Green Tree Inn of Abraham Lincoln memories, will yield next week to nthe auctioneer’s hammer and the wrecking crews to make way for the juggernaut of progress.

The old house, which rose in solitary grandeur above the black ruins of the “fire of ’71,” and sheltered famous men and women for a generation after, will close its doors to the last lodger next Wednesday and be supplanted in time by the main part of the $10,000,000 Northwestern railroad station.

This is a sad week for those relics of the ancient days who still inhabit the Gault house. Old Bridget Marley moved tearfully from room to room yesterday, touching up the haircloth chairs, the yellowing pictures, the low colonial style beds, and the brass candlesticks. Bridget is a chambermaid.

She said:
“O dear, O dear! to think it was in this room that I waited on Mme. Patti, and here that Sir Henry Irving called me, and here I heard Col. Ingersoll talking and laughing.

“I used to be a spry young thing, dancing down these halls with a little white cap on my head.

Ah, many was the merry party the ladies and gentlemen had in that old fining room,” pointing to the old American plan dining room on the second floor, dismantled and unused for years.

“I have been in the service of the Pearce family for fifty years or so,” she said. “It was Mr. Pearce’s mother that hired me first.”

J. Irving Pearce, the proprietor, who stood listening to Bridgett’s chatter with a tolerant smile, nodded his head in assent. It was his father who built the Gailt house in 1871. 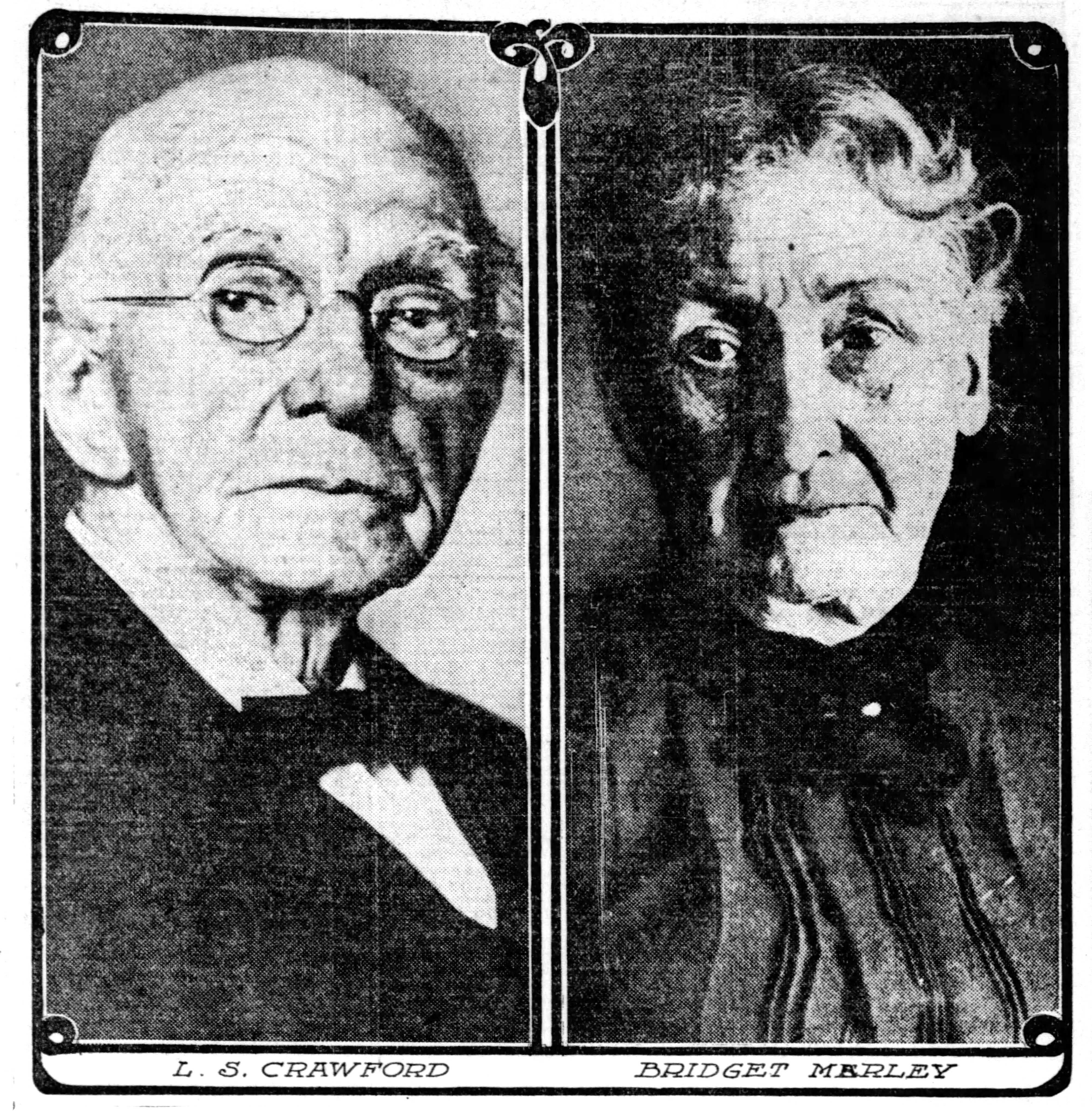 Oldest Lodger Reminiscent.
Wandering around the lobby of the hotel, already showing signs of ruin that soon will come upon its floors, was another ancient figure, An old man, likewise bent and gray, looking out at the street life through eyes that could see but dimly. It was the “oldest lodger,” L. S. Crawford, who has lived in the hotel since 1878.

“Yes, yes,” he said, “I suppose I shall have to find a new place. You see I came here a few years after the fire on a visit. I was going to stay only a few weeks, but the few weeks have gone on until now.

“I’ve seen Gov. Dick Oglesby and John . Logan and many a great man walking around here smoking his cigar in the old days,” the oldest lodger went on. “I made a little money during the war filling contracts for the government, and I came out west to invest it. I stopped at a few cities on the wat, and when I reached the Gault House I intended to stay only a few weeks, but here I am.” And he laughed again at his joke.

Recalls Great Poker Games.
“It was a brave place in those days, a grand place,” he continued. “There was no hotel in Chicago to equal it. The big stockmen from the west and the big cotton and tobacco men from the south used to stop here. There was many a little poker game, too. I remember nights when thousands of dollars changed hands.
“Let me see. Who was here in those days? Well, I remember Gen. Buckner of Kentucky the best. He and his friend, Gen. Reneau, who was a rebel and adjutant general of Mississippi, used to stop here. They were great poker players. Ex-Senator Vilas of Wisconsin, Ingersoll, Irving, John Spears, P. J. McGrath, Senator Duncan—ah, the list is a long one. There have been many changes. My memory is not as good as it was—you must remember I am 85 years old.”

The Gault house recently made an attempt to face the new life. A year ago its walls were redecorated and its old furniture upholstered, and the whole place was renovated and sweetened, but the fight was an unequal one.

The property that must be vacated is known as the “machinery district.” Several big firms will find new locations. Among these are the J. T. Ryerson & Sons company at Clinton and Lake streets, the H. M. Hooker Glass company, and the Raymond Lead company. The Ryerson company is building a huge new house at Fifteenth street and Ogden avenue. Old landmarks such as the Gault House and the Barnes House also will go. 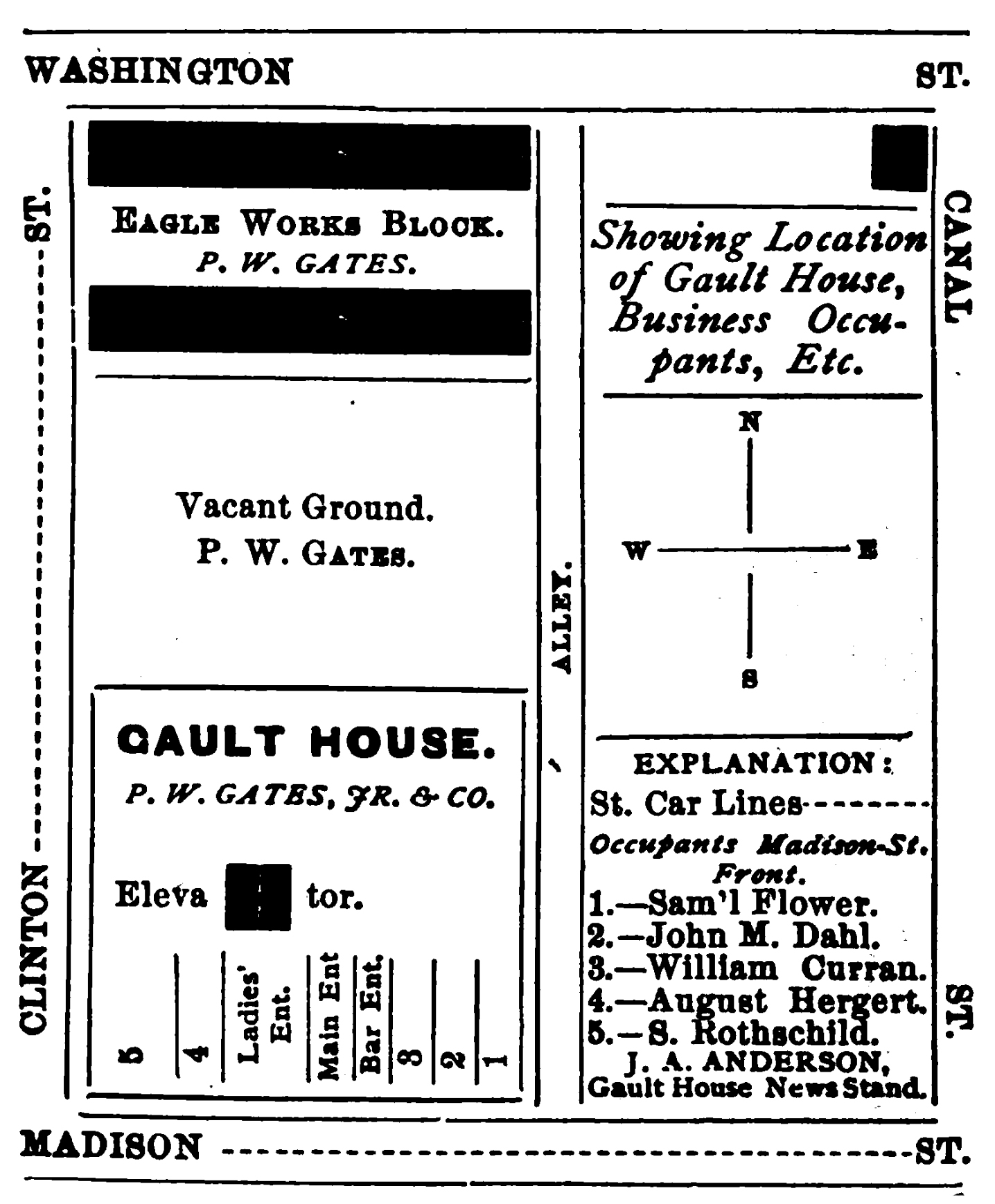