On the extension of Dearborn street, very valuable improvements are now to be observed going up. On the west corner of Dearborn and Monroe streets, H.H. Honore is erecting a five-story marble front, which will cost $150,000 when finished. On Monroe street, the building will front 46½ feet, and on Dearborn, street 190 feet.

Directly on the opposite side of the street, several gentlemen of this city are erecting a five-story marble front, which is to extend 300 feet on Monroe street. Four stories of this building are already up. Its entire cost will be in the neighborhood of $200,000. 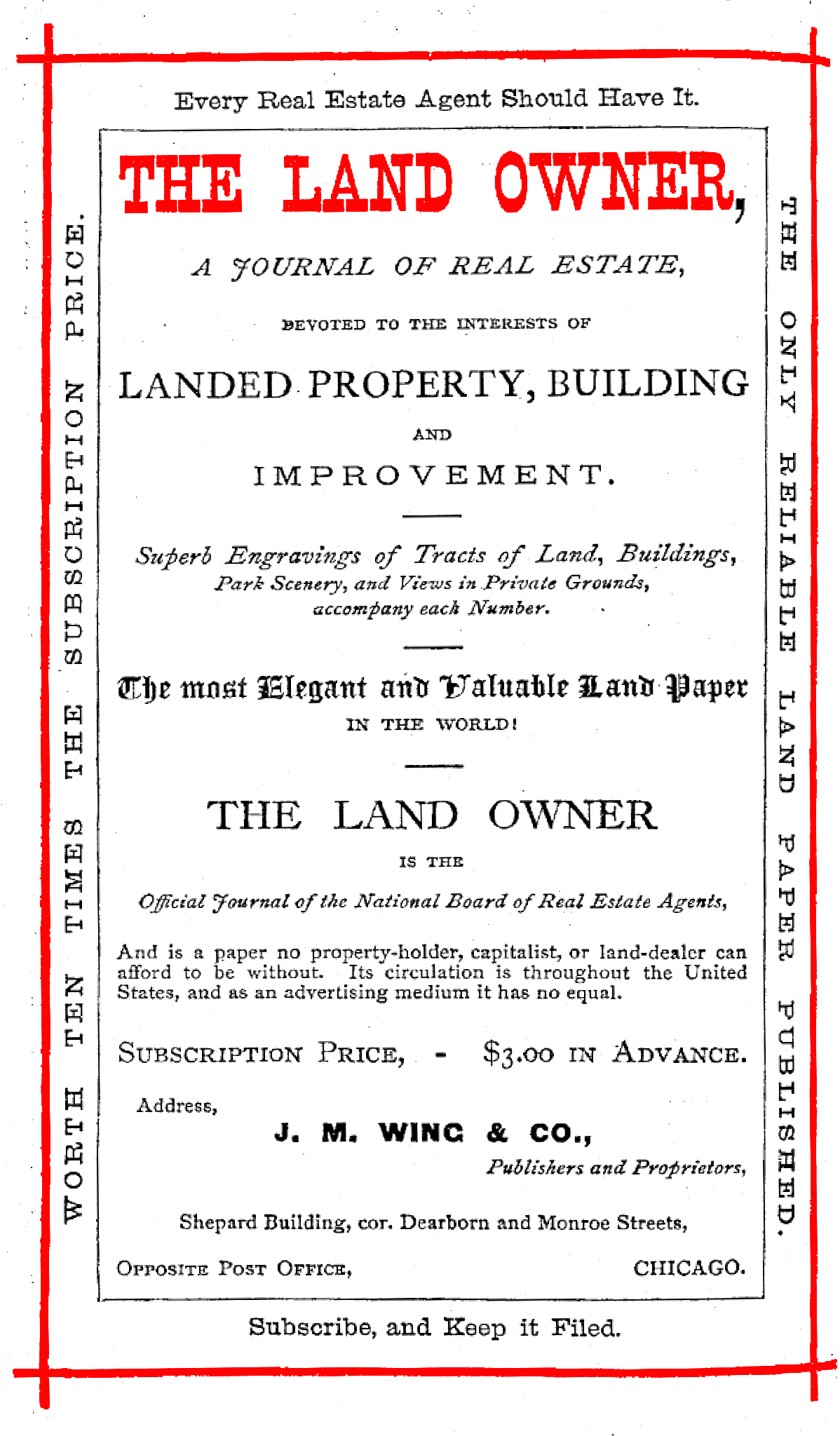 THE NEW SHEPARD BLOCK
The Land Owner Publishing House
The accompanying engraving exhibits the new Shepard block, recently erected at the south-east corner of Monroe and Dearborn streets by H.M. Shepard, Esq., a prominent lawyer of this city, lately of the firm Messrs. Fuller, Ham & Shepard. It was the pioneer structure on the Dearborn street extension, and has, therefore, attracted considerable attention since its foundations were first laid.

This fine edifice has a frontage of 190 feet on Dearborn street, its depth being 32½ feet on Monroe, with entrances from either street. The ground floor is divided into ten elegant stores, or offices. The other floors have a long corridor, running the entire length of the building, the offices all fronting on Dearborn street. Each floor is provided with closets, and each room with water, rendering the building a very desirable one for office purposes. The front is of Athens marble, in the modern French style, and highly ornamental, the whole costing upwards of $86,000.

Messrs. F. & E. Baumann are the architects, who, considering the depth of the lot, and the disadvantages under which the building was erected, have done themselves great credit in its construction. It was almost entirely erected during the winter of ’69 and ’70. The glass for this block was furnished by Messrs. Lewis, Ham & Co., 96 South Water street, Chicago, who are the sole importers of Chance’s crystal sheet glass. The surface of this glass is brilliant; in thickness, it is 26 ounces to the foot, the ordinary “double thick” being but 21 ounces. After polished plate, this glass is the best that can be procured, and is destined to come into general use in the hundreds of new buildings now going up on every land. Messrs. Lewis, Ham & Co. keep, at all times, a full stock of this superior material. 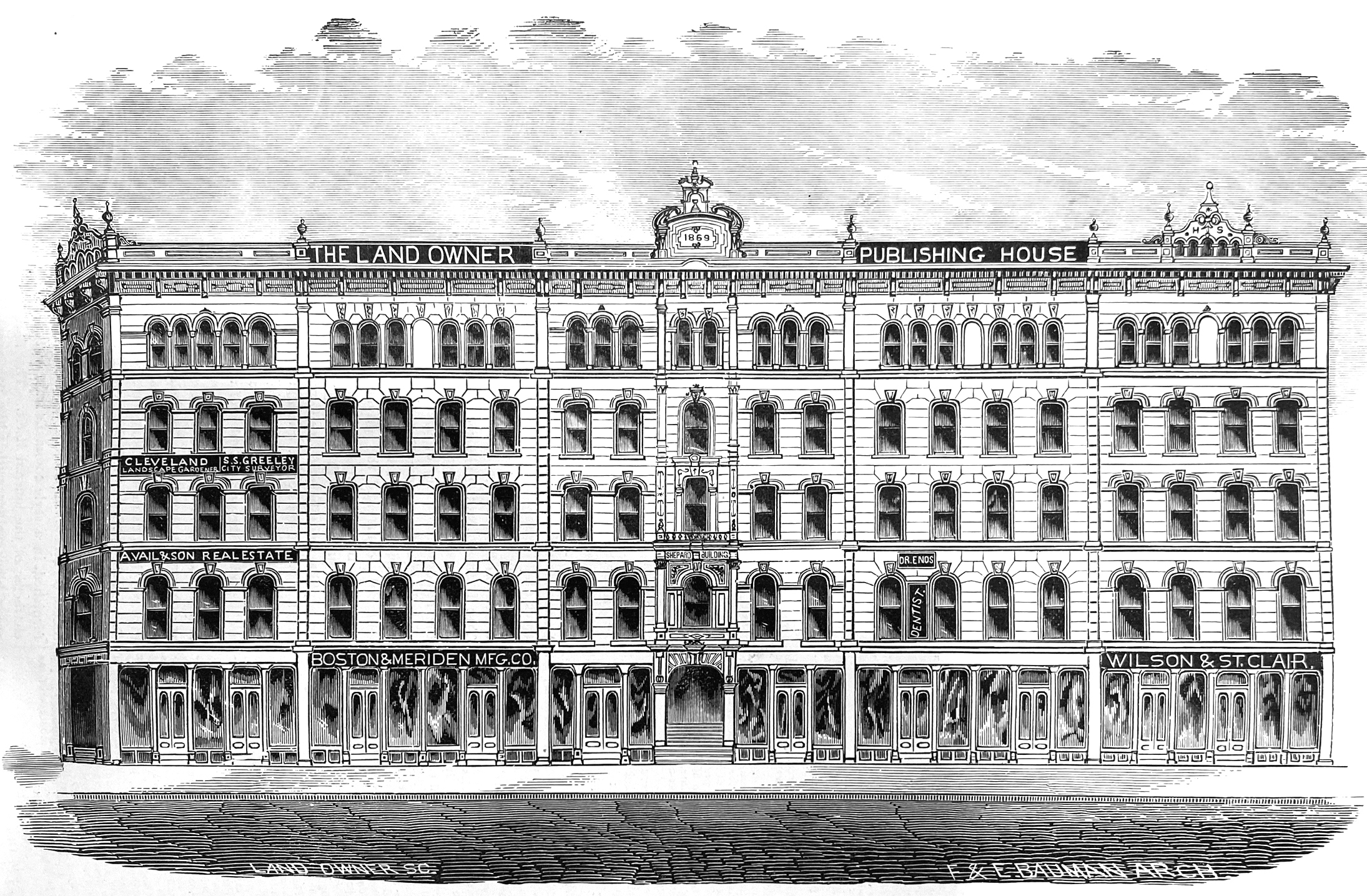 This block is largely occupied by the various publishing offices and departments of The Land Owner. The counting room of this establishment is located in the centre of the building, fronting Dearborn street, directly over the main entrance, as shown in the engraving. Here are also located the editorial rooms and the private business offices of the proprietors. Connected with the counting room is the “file room,” where are kept back numbers of The Land Owner, and the bound files of back volumes, classified and placed in cases. Adjoining this room is the room used for engraving, where are deposited the great number of wood cuts, and the large blocks from which our elegant cartoons are printed. These valuable cuts are constantly increasing, as the establishment employs about a dozen engravers to turn out the illustrations that have rendered The Land Owner so valuable, and given it so extended a circulation all over the country.

Initially, the several departments and offices of The Land Owner are elaborately furnished, in a style commensurate with the character of the journal itself. The desks are of black walnut, with white white oak panels, the words “The Land Owner,” in a scroll, similar to the general heading of the paper, being carved upon the top of each. The floors of the private offices are covered with elegant Brussels carpets, that of the counting room being oak and black walnut inlaid. Taken as a whole, there is no better arranged or tastefully fitted establishment of the kind in the United States.

The other occupants of this building are seen by their respective signs.

Messrs. Wilson & St. Clair are located in the south end of the ground floor, at 191 Dearborn street. They are the publishers of a regular semi-monthly magazine, entitled The Herald of the Coming Kingdom, religious tracts, secular and religious books; music printers and stereotypers, etc. They are also the proprietors of three useful and valuable inventions, known as follows:

Each of these inventions are designed to supersede the use of what is known as rubber moulding, furnishing a complete protection to doors and windows from dust, air, snow or rain, without the introduction of moulding.

No. 77, ground floor, is occupied by C.D. Ulmer, Esq., general agent for the western and southern states, of the “Never Failing, Self Locking Window Fast,” an invention that should be upon the windows of every building, as it is a safe and sure protection; both of which are manufactured solely by the Boston and Meriden Manufacturing Company.

Messrs. A. Vail & Son, real estate agents, occupy the corner office, fronting on Monroe street, in the second story. This is a well known and reliable house, and transacts a large business, especially in cheap lots for laboring men, or parties seeking good investments.

Dr. H. Enos, occupying offices near The Land Owner counting room, is a former assistant of the celebrated Dr, Evans, one of the leading dentists of Paris, and enjoys a large and lucrative business.

The same office is occupied by H.W.S. Cleveland, Esq., the landscape gardner, whose elegant designs for private grounds, and popular articles on various subjects, have attracted much attention.

H.M. Shepard, Esq., the proprietor of the building, has his law office on the third floor, and acts personally as agent for the building. We believe there are several very fine offices in it yet remaining unrented. 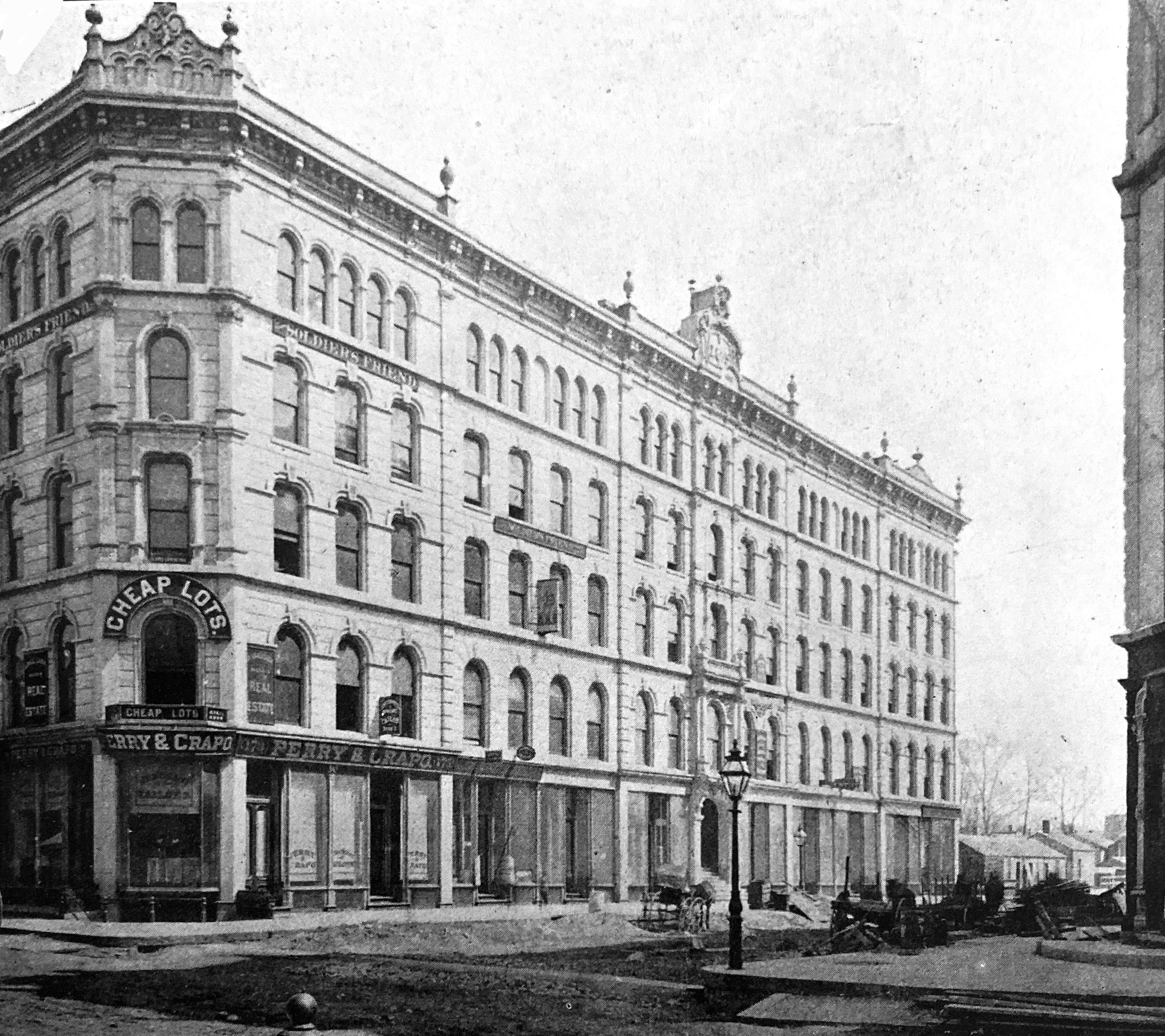 Shepard Block
Perry & Crapo, tailors, have removed to the Shepard Block on March 10, 1870.

THE SHEPARD BLOCK—THE BURNT OFFICE OF THE LAND OWNER.
We give an illustration of the Shepard Block, at the corner of Monroe and Dearborn streets, destroyed in the fire, where the office of The Land Owner was so comfortably located, and where we had hoped to continue for many years in the service of land men and the general public. It will be familiar to all our friends who so often visited us there. Nothing remains but an immense pile of debris, which will be removed, however, early in the Spring, when Mr. Shepard will rebuild the block.1 This office was standing long after the post office, on the opposite corner, was gutted, the Honore blocks, directly opposite, were both down, and The Tribune’s fire proof had succumbed to the flames, before this edifice fell. Had the fire not been so intensely hot and sweeping, much of our material might have been saved. Mr. Geo. W. Sparks, cashier of The Land Owner, exerted himself in a very praiseworthy manner, showing great presence of mind. He carried the elegant private library of our Mr. J. M. Wing, consisting of over one thousand volumes, out into the vacant lot adjoining on the south, where it was consumed; but our books of account and subscription books he managed to get beyond the reach of fire, and saved them. This building went down about seven o’clock on the fatal Monday, its front wall falling directly across the street. 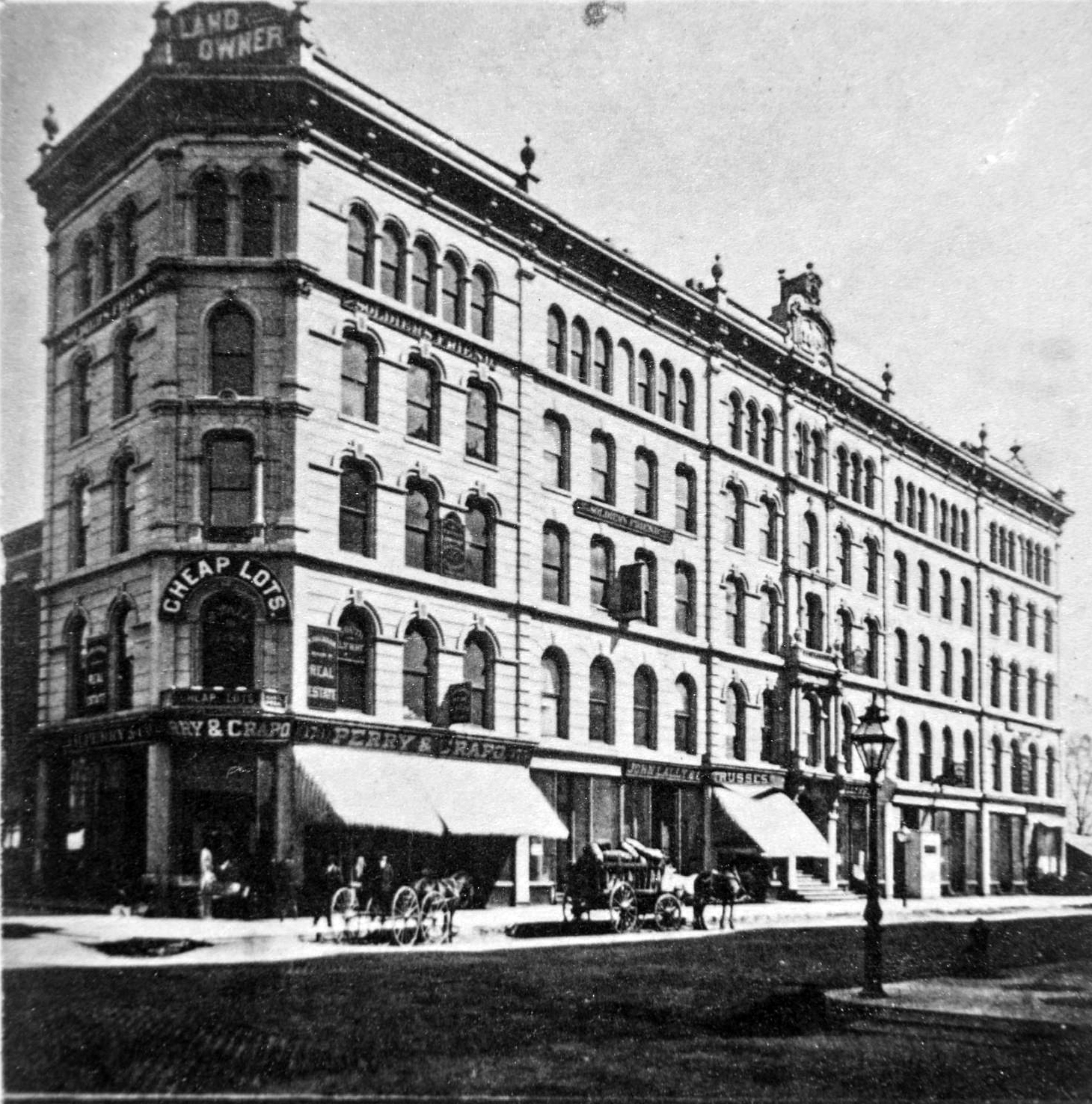 The engraving displayed in this issue of The Land Owner was drawn from the above photograph.

HIS journal has been created to supply a demand. 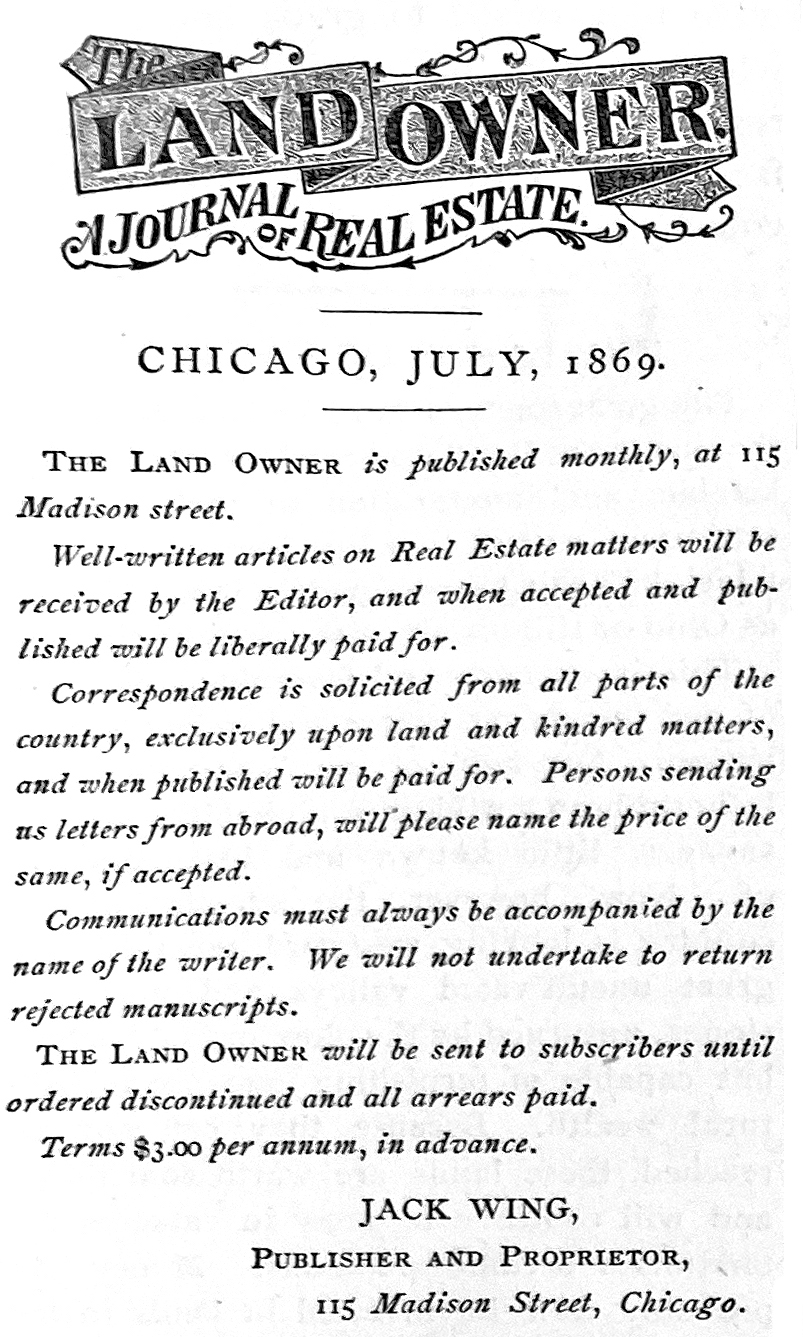 It takes its place among the periodicals of the day as the only paper devoted exclusively to landed interests in the country. Hence, its mission is second to none in extent, its heretofore unoccupied field a new one, and its publisher is confident in the belief that owners of real property, as well as brokers and dealers throughout the country, will receive it with satisfaction.

A bold, fearless, and always outspoken journal in the Real Estate interest, The Land Owner, as its name indicates, will labor for the good of every person possessed of real property, by keeping them constantly informed of all movements in the market, improvements in the market, ratio of enhancement, etc., as well as the all-imporatant matter of taxation. Its correspondence from every part of the country, on real estate matters, will be among its most valuable features.

Its editorials will be written boldly and truthfully, without regard to private interests.

Each number of The Land Owner will contain at least two magnificent cartoon engravings of prominent tracts of land or subdivisions, with sketches of the same. This feature will render it especially attractive to all persons interested in the soil.

Typographically The Land Owner tells its own story. We take pleasure in presenting this initial number in a style which we believe does credit to the Real Estate trade, as well as to the immense interests the paper seeks to represent.

The Land Owner, January, 1872
Reprinted from the Toledo Visitor2

THE RESURRECTION OF THE LAND OWNER
One if the most noteworthy evidences of Chicago pluck and industry noticed since the fire that exhibited by Messrs. J. M. Wing & Co., proprietors of The Land Owner. At the time of the conflagration Mr. Wing was in Colorado, and his premises, together with all the material in his office, was destroyed, not an item, so far as we are informed, being saved. On receiving intelligence of the fire Mr. W. immediately returned to Chicago, to find the result of many years of toil had been swept away, nothing but ashes remaining. It was a severe blow to him—he had nothing left, but did not repine at his lot. Without an hour’s unnecessary delay he commenced laying his plans for a resumption of business, and while multitudes were looking about for insurance and other assistance, he was bravely at work determined to resurrect The Land Owner, and that its form should be more perfect and its beauty enhanced buy its fiery trial. It will continue to be The Land Owner, but so changed will it be, so much more perfect in detail, and so much better adapted to the necessities of the real estate and other business men, the it will have very little resemblance to the former journal.

As a paper devoted to real estate interests, The Land Owner was previously without competitor in the United States. It was equally valuable as an advertising medium, and no paper published in Chicago has exerted fo favorable and wide an influence, or done more towards the making the city what it was before the calamity. We cannot but commend the action which retains Mr. Wing in that city; a wide awake enterprising gentleman, thoroughly conversant with his business and alive to the commercial importance of the city, and not a branch of trade could afford to lose such a valuable auxiliary to the development of the vast resources of the place. With Mr. Wing’s neighbors and multitude of friends we sympathize with him in his calamity, and join with them in the hope that his efforts to recover from its effects may be as successful as his disaster was unexpected and severe.3 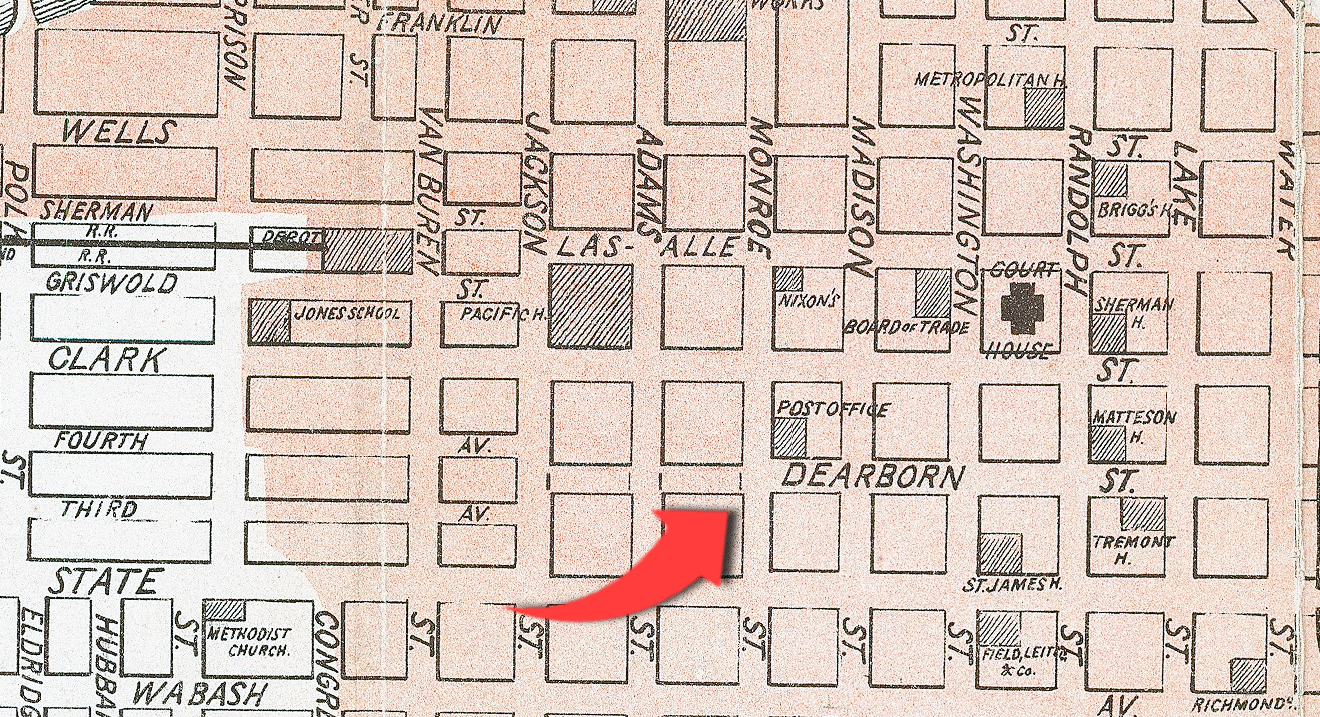 1 Unfortunately, the second Shepard Block was never built. According to Mr. Frank A. Randall’s exhaustive work, History of the Development of Building Construction in Chicago , Second Edition, 1999, Shepard Block II was rebuilt in 1872 and torn down in 1880. It is presumed that Mr. Randall made this statement based on the January, 1872 The Land Owner article. This was not the case. The lot on the SE corner of Dearborn and Monroe was left vacant until 1884 when the Commercial Bank Building (1884-1924) was built. This, too, was stated in Mr. Randall’s work, however, he failed to make the connection.

2 The Toledo Monthly Visitor was a four page, 21×28 inch real estate advertising sheet. It was established in 1870.