Also known as the Mohawk building, as the National City Bank building, and later as the Guardian Bank building was located at the southeast corner of Dearborn and Monroe streets, fronts 90 feet on Dearborn and 131 feet on Monroe, and is 100 feet high, with 6 stories and basement. The bank and security vaults occupy the first floor and basement; the upper floors are served by 2 passenger elevators. There are 100 offices, with 300 occupants, who are publishers, lawyers, agents, and insurance and real-estate men. The exterior is granite, brick, and steel, and presents an imposing appearance. The structure was erected in 1884, at a cost of 8300,000. It was designed by Jaffray & Scott, architects. The building was replaced by a two-story “taxpayer” building in 1934 along with the adjoining Adams Express Building. 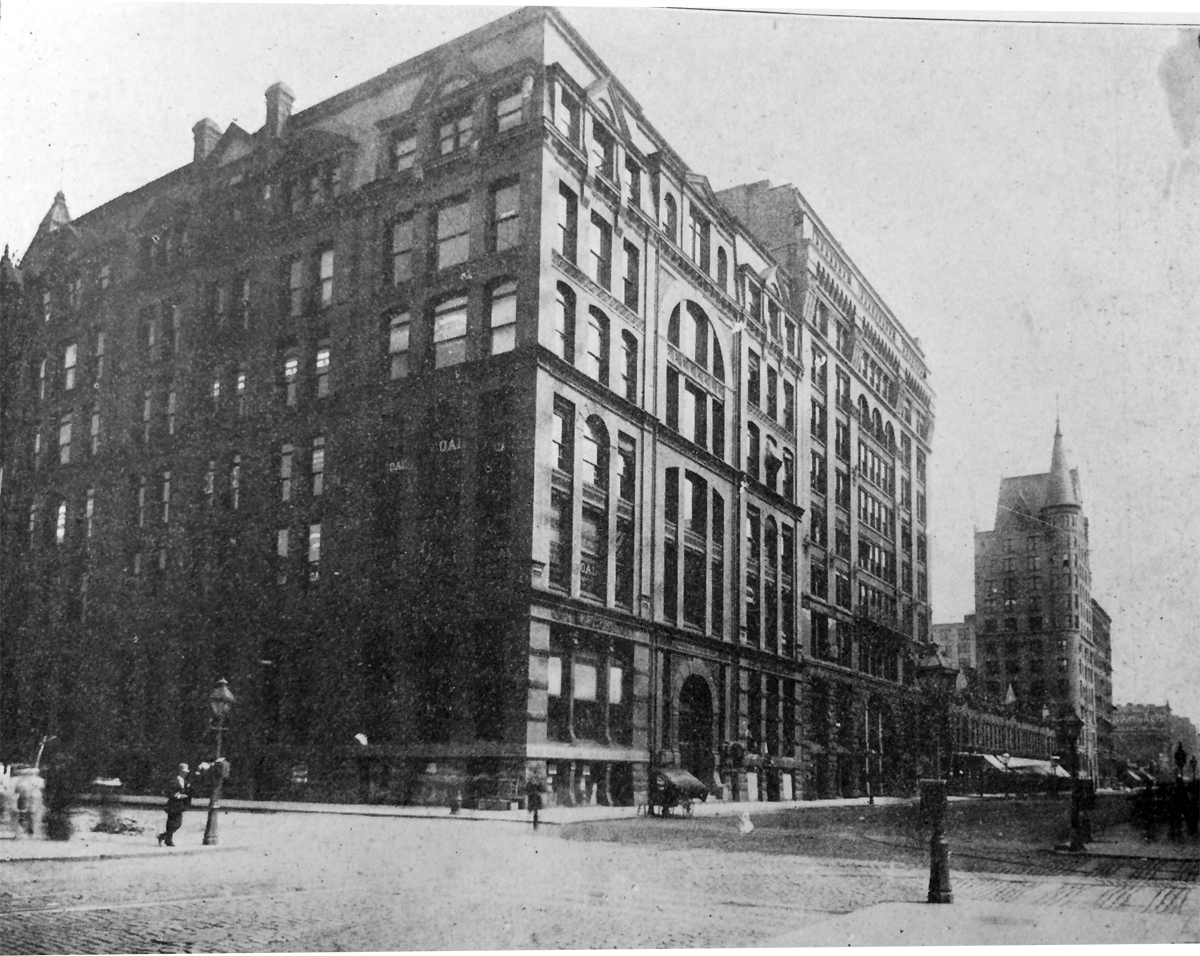 Their Idea of Absolute Security—A Detailed Description of How Great Values Are Guarded in the New Building They Have Just Occupied.

Two burglar-proof vault entrances, the largest and heaviest in the world, represent this famous company. They are supplied with all of Hall’s latest patents. The doors are made so as to prevent the introduction of nitro-glycerine or powder by Hall’s cog-wheel pressure-bar. The plates are all made out of five-ply steel and iron, welded together and secured with Hall’s conical screw plugs, made of the same material and tempered absolutely drill-proof. These screw plugs prevent the stripping of the plates and are fastened on the inside be being countersunk into a squarehead. The corners are solid bent angles, and the joints are so arranged that no two plates come together, all overlapping each other. With these patents of Mr. Hall’s the walls of these vault entrances are made as secure as though they were a solid mass, and the each plate being tempered by itself gives the greater security against the drill. These massive doors alone weigh about nine tons apiece, and are swung on Hall’s patent traverse hinge, which pulls the door straight out from the jams, thus insuring a perfectly air-tight fit.

The outer doors, secured by heavy round bolts, work in massive wrought-iron frames extending all round the doors, and secured thereto by Hall’s patent conical frame bolts, passing through all plates of the doors, and secured into the frame by reverse-threaded screw bolts, counter-sunk therein. These bolts are all threaded, and fit into corresponding threads in cone-shaped holes. Thus the frames and the bolt works are as secure as the walls against stripping with the hydraulic jack; which is a modern and formidable tool in the hands of burglars. The bolt work is so arranged that the bolts are thrown out on all sides at the same time. The connection of the bolt work and lock is operated by Hall’s patent built-in discs, that are built into the door while the same is being constructed, and are as secure against the drill as the walls. They cannot be punched in by the sledge, nor pulled out by the hydraulic jack. These doors, six in number, are each secured by Hall’s best double bank combination locks, and so made that each can be used separately or together, and when the bolts are thrown and the lock locked, they are so arranged that there is no connection to either the bolt or the lock from the outside. All is disconnected, and no pressure can be brought to bear either on the time lock, the combination lock, or the bolt work.

This work was awarded to the Hall Safe & Lock Company, Chicago office 67 Washington street, simply upon its merits, as the bank said they would make it a matter of security instead of price. The work was subjected to a test satisfactory to the committee, and everything was done by the Commercial Safety Deposit Company to have their security first-class in every respect. Contracts of this kind are always awarded to the Hall Safe & Lock Company, and they have now in this country their work in fifty-two of the largest safe-deposit vaults, and also have just taken contracts from the Prairie State Loan & Trust Company and the Dime Savings Bank for a complete depository for each of them. Their work is sold purely upon its reputation, as there never has been one of Hall’s burglar-proof safes robbed of a dollar by burglars.