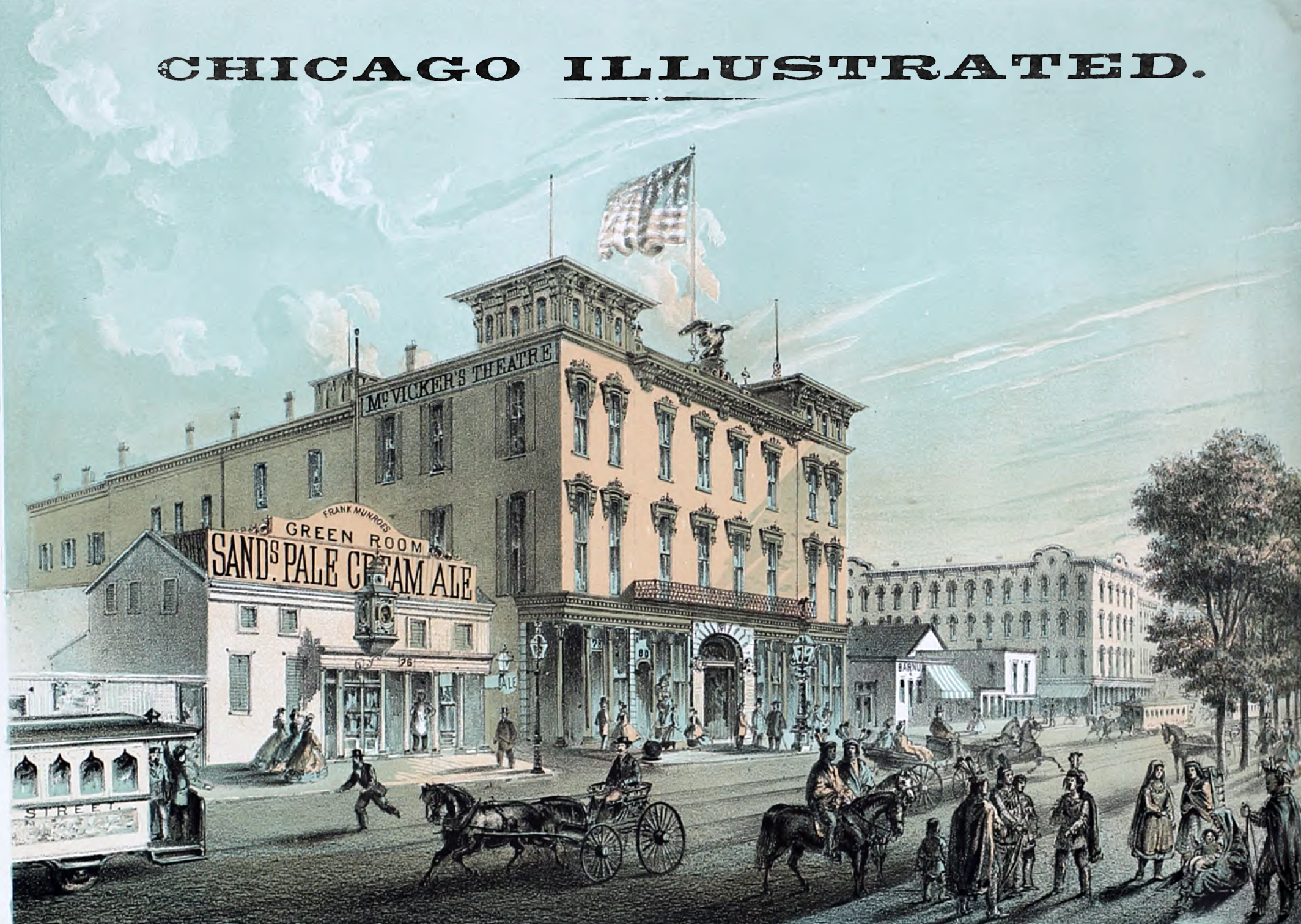 McVICKER’S THEATRE—Is built upon the School block, fronting on Madison street, between Dearborn and State streets, and is centrally located. It is built of red brick, with stone trimmings. It has a front on Madison street of 82 feet, with a depth of 190 feet. It stands alone, wholly separated from any other building, by wide alleys on each side, and in the rear. The front portion of the building is devoted to business purposes,—the ground floor to stores, and the upper floors to offices, club rooms, and like purposes. The entrance is thirty feet wide and forty deep; persons entering the door may ascend by easy flights of stairs to the auditorium, or pass under the dress circle into the parquette. The means of exit are easy, and in case of alarm the audience could get out without difficulty.

The Theatre proper is 79 feet wide by 147 feet deep. The stage has a depth of 61 feet, and the auditorium 86. There are seats for over 1,000 persons, while the lobby and aisles can accommodate 250 more. On occasions of special interest there have been as many as 2,000 persons in the audience. Boyington and Wheelock were originally the architects, though the building was mostly erected under the superintendence of Mr. James H. McVicker. It was built in 1857, at a cost of $83,000, and in 1865 was re-modeled at an additional cost of $33,000. It was commenced in April, 1857, and opened to the public on the 15th of October in the same year, with the comedy of the “Honeymoon.” It is probably one of the most comfortable and convenient theatre in the United States. Its stage arrangements are admirable. Standing alone, the building is capable of the most thorough ventilation. The theatre was erected in one of the most disastrous financial seasons Chicago has witnessed, and it required unusual nerve to carry the work to completion. For several years the investment was of questionable profit, and the proprietorship passed through a variety of hands. On the first of April, 1862, Mr. McVicker became the sole owner, as he had been the manager from the opening, and as he continues to be. Since that time the theatre has been a source of profit, and the perseverance of the proprietor, as well as his skill and experience professionally as a manager, have been rewarded in the most substantial manner. Some years ago, Mr. Samuel Myers, brother-in-law of Mr. McVicker, and an actor long and favorably known to Chicago, became associated in the management of the theatre.

McVicker’s Theatre is one of the institutions of the city. It enjoys the reputation of a well conducted, orderly and first-class place of amusement, at which, during the year, are produced in commendable style, the sterling dramas, and all the novelties of the day. During each season all the eminent members of the profession are engaged and appear in succession.

The success of this enterprize has been due to the personal efforts and personal integrity and ability of Mr. McVicker as projector, proprietor, manager, and actor, in all of which respects he has, and continues to enjoy, the unlimited respect and confidence of the people of Chicago, and of his own profession everywhere.