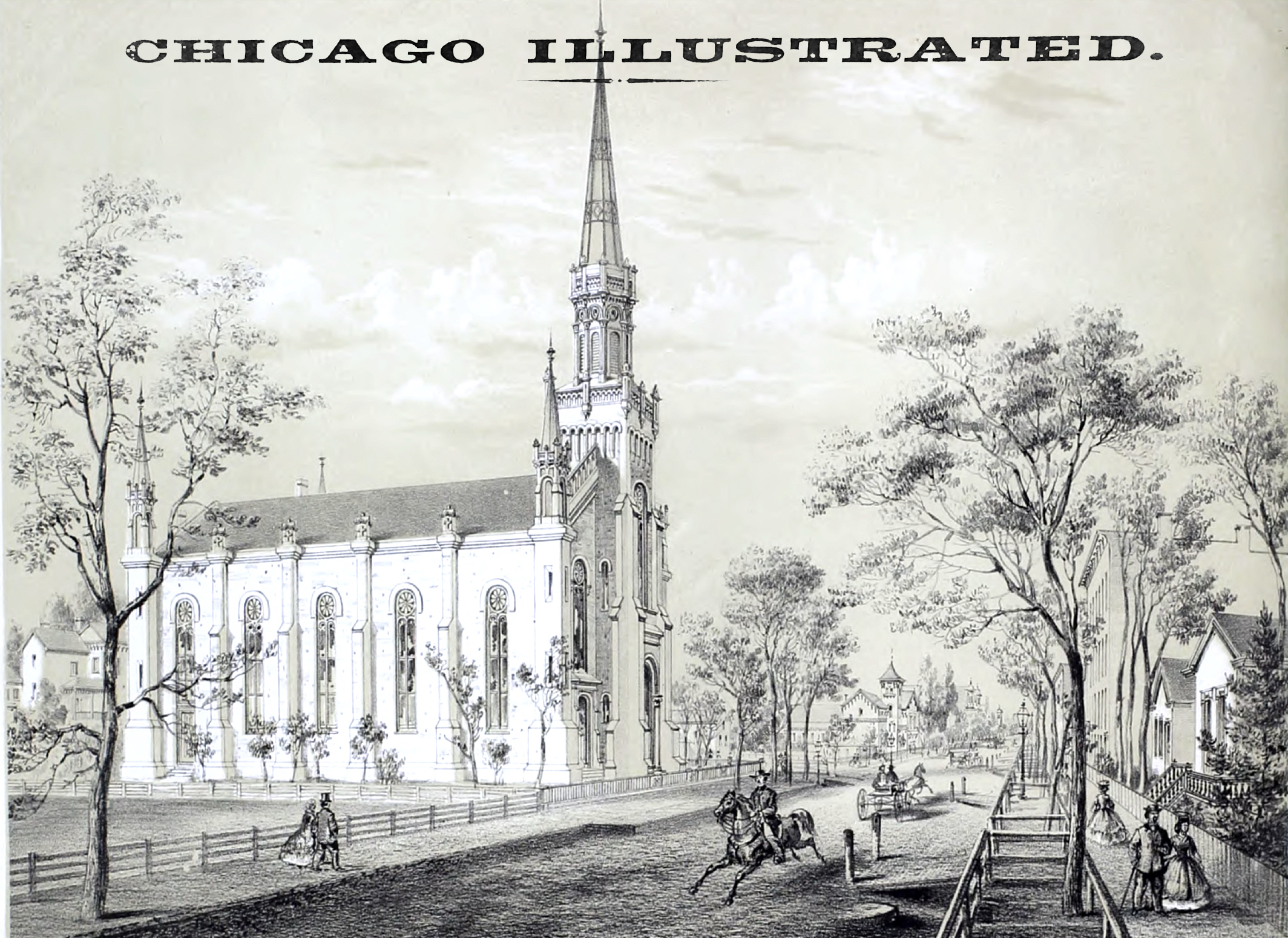 THIRD PRESBYTERIAN CHURCH.—This handsome church building is situated upon the North-west corner of West Washington and South Carpenter Streets. It is built of stone —the Athens stone of Illinois., The walls are rock faced, while the towers and trimmings are of dressed stone. The main tower, and steeple, and spire are models of symmetry and good taste, and compare favorably in beauty and finish with any similar construction in the city. The front is divided into three sections, the main one in the centre, with a smaller door-way upon the right and left. The audience room is spacious, admirably arranged, and neatly and comfortably furnished. The church has a very fine organ and a large and superior choir. In the rear of the audience room is a spacious lecture hall and Sunday School room.

The church society was organized on the 1st of July, 1847, by a committee of the Presbytery of Ottawa, the committee consisting of the Rev. Messrs. Patterson, Bascom, Wilcox, Walker and Henderson. At its organization there were thirty-five members of whom Messrs. Philo Carpenter, Henry Smith, Laurens Kent and Gustavus W. Southworth were chosen elders. The Rev. J. B. Walker was the first pastor, and continued until November, 1849. In November of that year he was succeeded by the Rev. Lewis H. Loss, of Rockford, who commenced in that month, but was not formally installed as pastor until May, 1850, and dissolved the connection in June, 1851. On October, 1851, he was succeeded by the Rev. Edwin G. Moore, who continued as pastor until the fall of 1854. From that time, until the installation of the Rev. Ashael Brooks in June, 1856, the pulpit was acceptably filled by the Rev. Mr. Ferris, of the Dutch Reformed Church. In November, 1859, the pastoral relation with Mr. Brooks was terminated. In the meantime, the erection of the church building had been commenced and completed under the most adverse circumstances. The congregation was comparatively small, and had suffered numerically by the separation, from the society, of those who had organized the First Congregational Church. When Mr. Brooks retired from the pastoral charge of the church, the Rev. Arthur Swazey, then of Galena, but previously of Massachusetts, was invited, and accepted the call. He began his labors on the 1st of April, 1860, and has continued since then as the pastor of the church. His zeal in the work was not without effect; it was communicated to the members of his flock, and his labors have been crowned with the happiest results, not only in regard to the temporalities of the church, but in its spiritual affairs. The congregation has grown rapidly in numbers, and in October, 1866, the roll of church members contained 434 names.

Dr. Swazey enjoys the highest regards of his congregation and of the public generally. As a pulpit orator, as a pastor, as a citizen, he stands high in the estimation and confidence of all who knew him, and to his perseverance is due, to a great extent, the success which has attended the church of late years. The following gentlemen are the present officers of the church:

The Sunday School attached to the church, is under the superintending care of H. R. Skinner, and numbers 400 pupils; it also contains the William Street Mission School, superintended by E. W. Hawley, which has over 500 pupils.