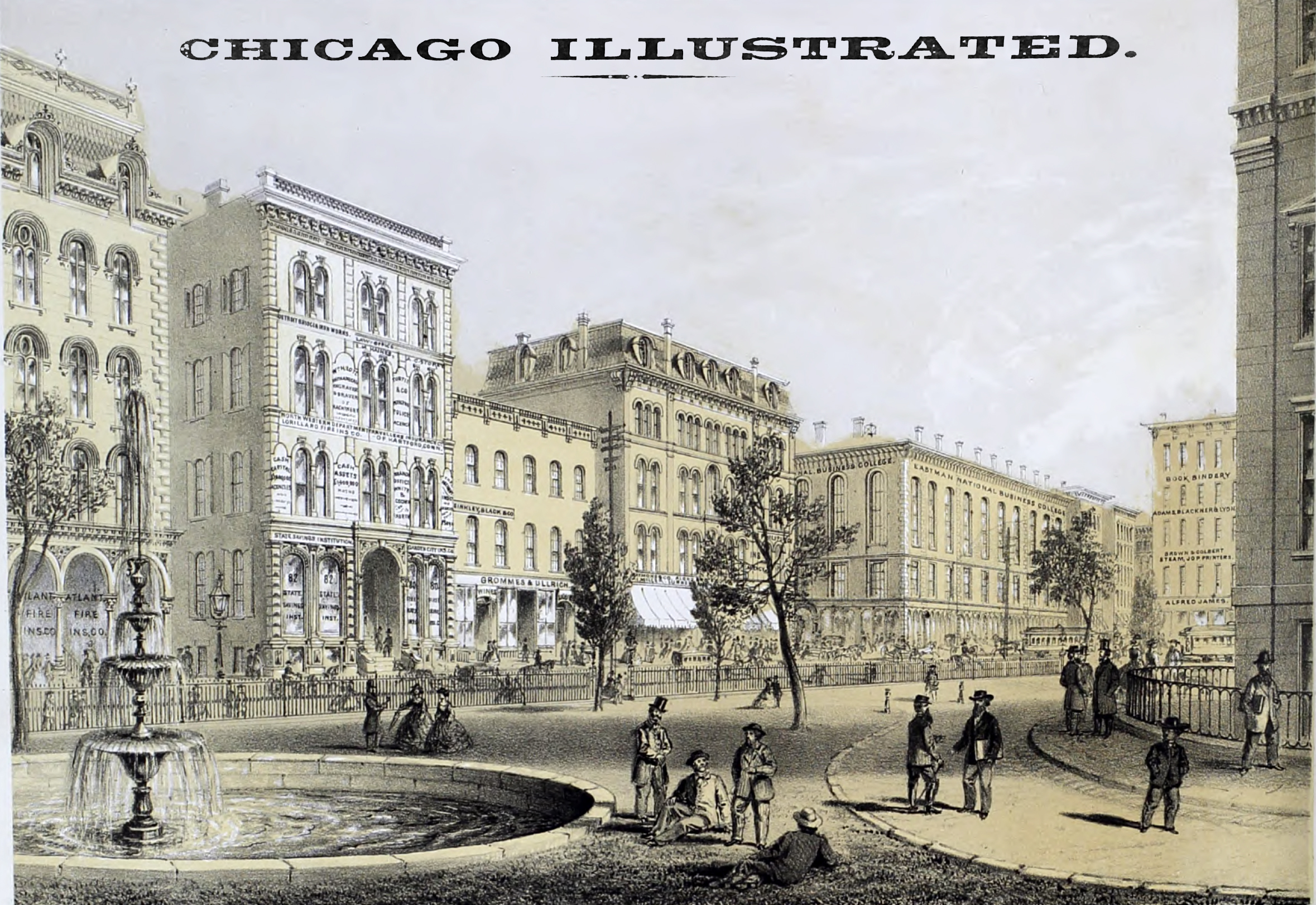 THIS VIEW is taken from a point south of the Court House, taking in the north half of the block on LaSalle between Washington and Randolph streets, and so much of the block north as exhibits the building for many years known as the Metropolitan Hall, now occupied by Eastman’s National Business College. The east side of the public square is shown, and presents an appearance by no means worse than the reality.

The building upon the north corner of the block is built of Milwaukee brick, with stone trimmings, and is owned by H. H. Magie, Esq. It is occupied by Insurance agents and others: the Lumberman’s Insurance Company having the principal offices on LaSalle street. The next building is mainly used by Grommes and Ullrich as wine vaults and warerooms. The Board of Education have rooms also in the upper part of the building.

The building numbered 80 and 82 is the recently finished Banking and Insurance Office, built and owned by the State Savings’ Institution and the Garden City Insurance Company; State Savings’ Institution being the owner of 82, and the Garden City Insurance Company being the owner of 80. The building is four stories and a basement; it is forty-five feet front and seventy feet deep; the side and rear walls are of Milwaukee brick, with marble front, and is an architectural model for a Banking house. It is fire-proof. In all its details, as well as its location and appearance, it is a happy combination of safety and convenience for the business to which it is devoted. The building was designed and erected under the superintendence of E. Burling & Co., architects, and the cost was about $75,000. The building contains six vaults, rising from the foundation, upon whose strength and resistance the architect displayed unusual care. The vault in the Bank wing; is rendered doubly safe from fire or burglar, by a massive Safe of the Bacon patent and pattern, and this provided upon each of its compartments with Covert’s Permutation, and the Sargent’s Magnetic Lock.

The State Savings’ Institution, and the Garden City Insurance Company are distinct corporations. They both wanted places of business; both fixed upon this site, and thus it was that they came to be located under the same roof. This Insurance Company is one of the oldest Home Insurance Companies known in Chicago; and the erection of such a substantial evidence of its own permanent interest in this city, has been accepted by the public as an additional guarantee of the solidity of its growth, and the stability of its business. The Company is thoroughly a Home Company, and the completion of a business building of such n elegant and substantial character, impressively conveyed a practical lesson to the public; the lesson was that the capital invested by these Home underwriters, was really an investment which Chicago was to enjoy, and be enriched by its profits. This contribution to the architectural adornment of the city is the first in what we hope will be an unbroken series of similar public dividends.

The State Savings’ Institution, from which the building has received its name, has long enjoyed an honorable fame in Chicago. It was chartered and organized in the year 1857. In 1859 the offices of the Bank were moved to Nos. 104 and 106 Washington street, and during the winter of 1863-4, the name was changed from the Illinois Savings’ Institution, to the State Savings’ institution. During all those years, under the careful management of its officers, the Institution was growing in public confidence, and by legitimate means strengthening and extending its business. During the wild-cat excitement of 1861, when every bank in the city was embarrassed by the piles of depreciated currency, and many had to suspend business, this Institution safely piloted through the difficulty; it never paid out any depreciated money, and its depositors suffered no loss; and consequently the bank adjusted its balance without the necessity of law suits.

Since the establishment of the Institute, Chicago as well as the country generally, has passed through several seasons of financial embarrassment and distress. Banks and commercial houses had to sustain their troubles as best they could. The State Savings’ Institution however, though subjected to the same trying ordeals, successfully and honorably passed through these seasons of alarm and excitement, each time strengthened in public confidence. To the credit of the bank it should be stated that, when the war broke out, and gold advanced high up into the eighties and nineties, it paid to its depositors every dollar of coin they had in the Institution. The Bank is entitled to share with the Insurance Company the credit due to this investment of the proceeds of a liberal business, in the permanent improvement and adornment of Chicago.