On the corner of Lasalle and Randolph streets a fine business block is being erected from plans by A. Bauer, for Haines H. Magie. It will be 40 feet front on Randolph by 80 on Lasalle street, and be four stories with basement and attic in height. The materials used in the construction is pressed bricks with cut stone facings, and the estimated cost is $35,000. The building is intended for the offices of brokers or professional men. 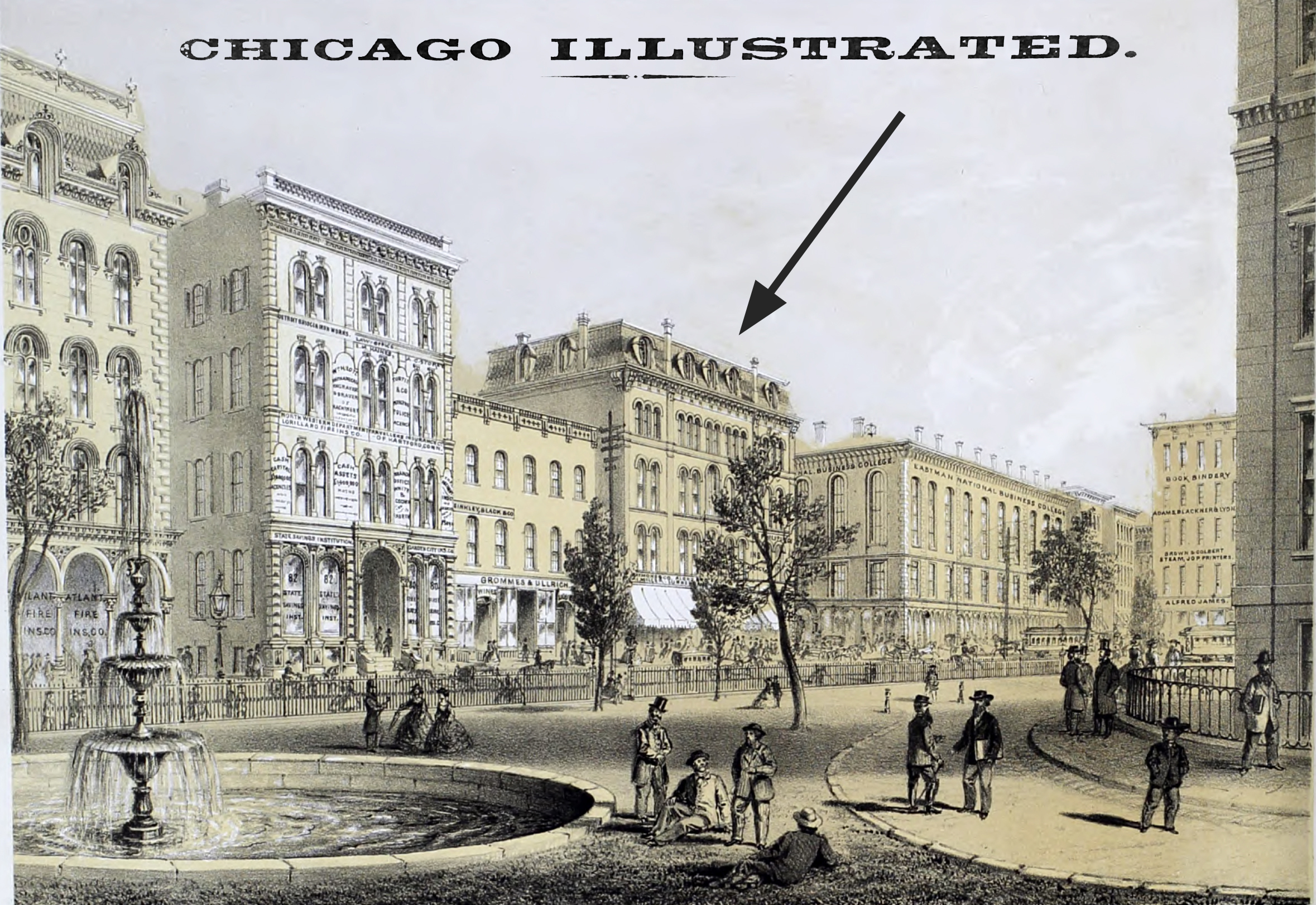 This view is taken from a point south of the Court House, taking in the north half of the block on LaSalle between Washington and Randolph streets, and so much of the block north as exhibits the building for many years known as the Metropolitan Hall, now occupied by Eastman’s National Business College. The east side of the public square is shown, and presents an appearance by no means worse than the reality.

The building upon the north corner of the block is built of Milwaukee brick, with stone trimmings, and is owned by H. H. Magie, Esq. It is occupied by Insurance agents and others: the Lumberman’s Insurance Company having the principal offices on LaSalle street.

A Monument in Engraving.
We are in receipt of a handsome steel engraving from the Western Bank Note and Engraving Company, of this city, which could have been issued at no time nor place more appropriate than now, while the National Republican Convention is in session. It is the facsimile of a document originally engrossed upon parchment and compiled by the Hon. Godlove S. Orth, of Indiana, with such o namentation and additions as the tastes of the engravers have seen fit to make.

The engraving contains the act of Congress passed by both Houses, early in 1865, amending the Constitution so as to abolish slavery in the United States. To this are appended the autographs of all the Senators and members of the House who voted for the measure, the signature of the then President and Vice President, the Clerks of the Senate and the House. These names, besides their important connection with this single fact, are those of the public men most distinguished in a trying time for our republic. Their autographs would be considered valuable enough singly, but combined and attached to this historie bill, they become so much more the object of public interest. 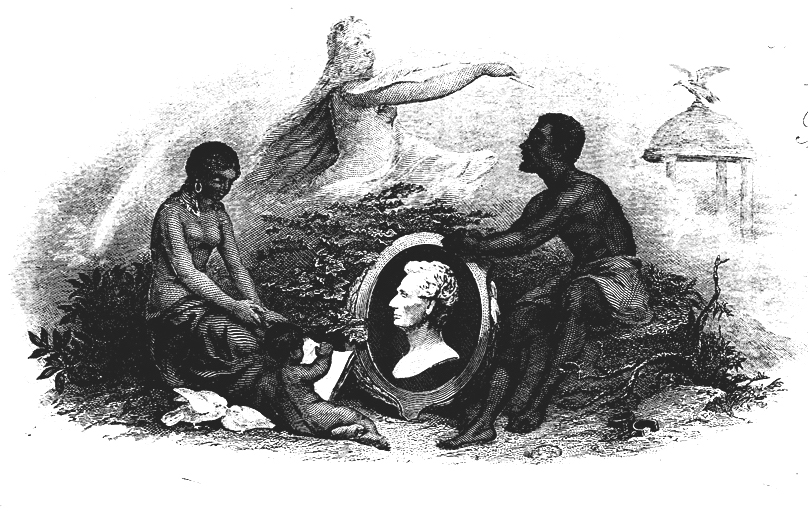 The artistic merits of the engraving, which may be seen at the rooms of the Western Bank Note and Engraving Company, on the corner of La Salle and Randolph streets, are such as demand special mention. Few persons have an adequate idea of the enormity of detail and work involved in a steel engraving of this description. The art of the painter and the art of the engraver are combined. A dozen different machines used in transferring impression from steel to steel; diamond pointed instruments for the delicate tracing of the lines; hundreds of tons of pressure in securing the lasting and perfect impression, and other details too numerous to mention, are as essential as the skill of the workman who directs the graver. It is creditable to Chicago that she alone of all Western cities can produce a work of art which calls for these essentials.

The chief artistic beauty of the present engraving is to be found in the vignette which forms the center piece. This was originally designed for it by the company, and is exceedingly happy in the conception. The group is that of a freedman, his wife and child, the latter reeling at the feet of its mother and reading. The man supports a medallion of the lamented Lincoln, in which an excellent likeness has been attained. The accessories are the peace branches, the doves, a rainbow in the sky and the Angel of Peace pointing to the capitol emblematic of the nation. The lines bring out the light and shade as truly as in India ink sketch. Under this are the names of the Senators and members in autograph. The national shield and the words “Amendment to the Constitution,” form a back-ground to the whole, and, being lithographed, look as though they were a part of the paper. The whole is surrounded by a scroll border of geometrical lathe work, ornamented with monograms and appropriate emblems. 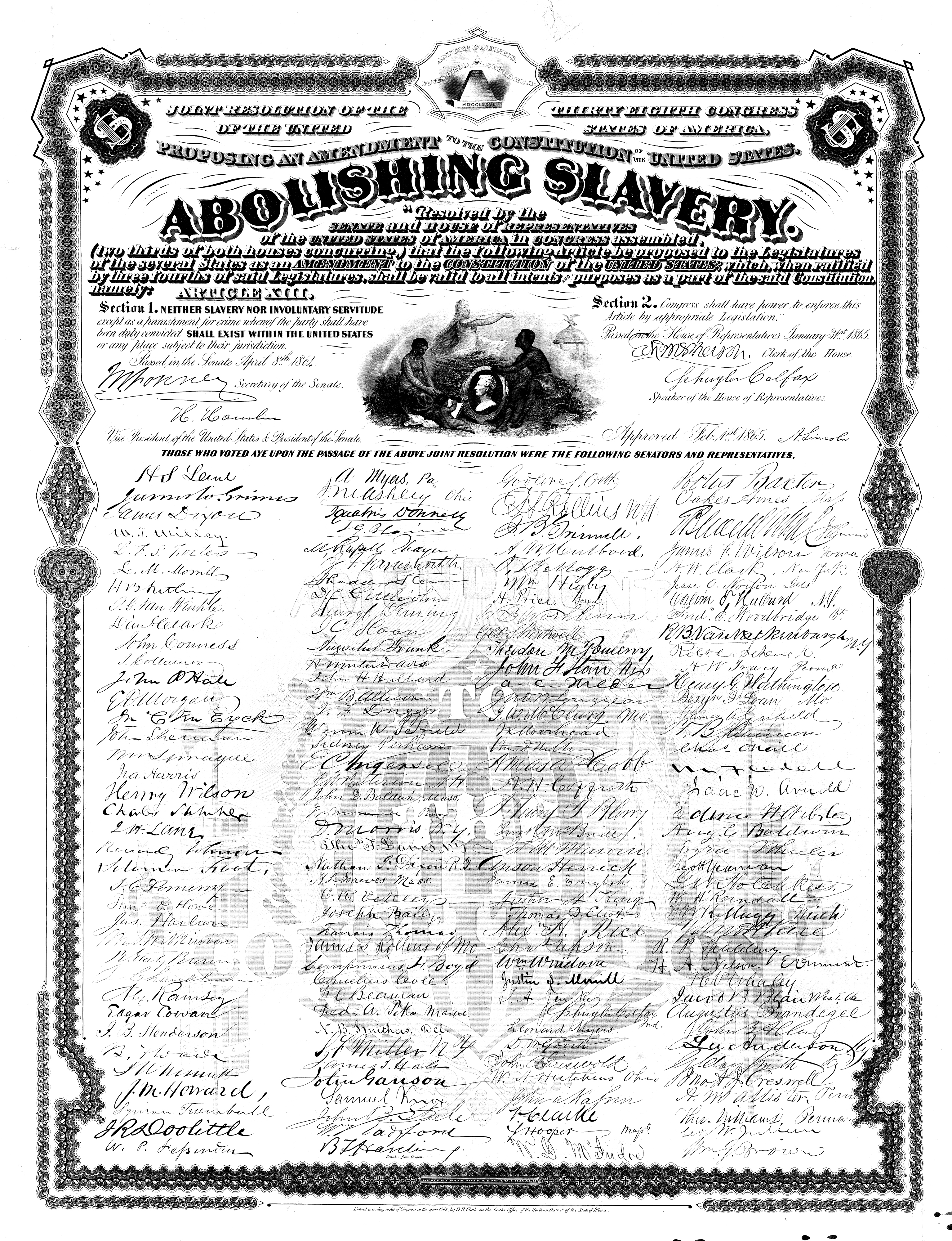 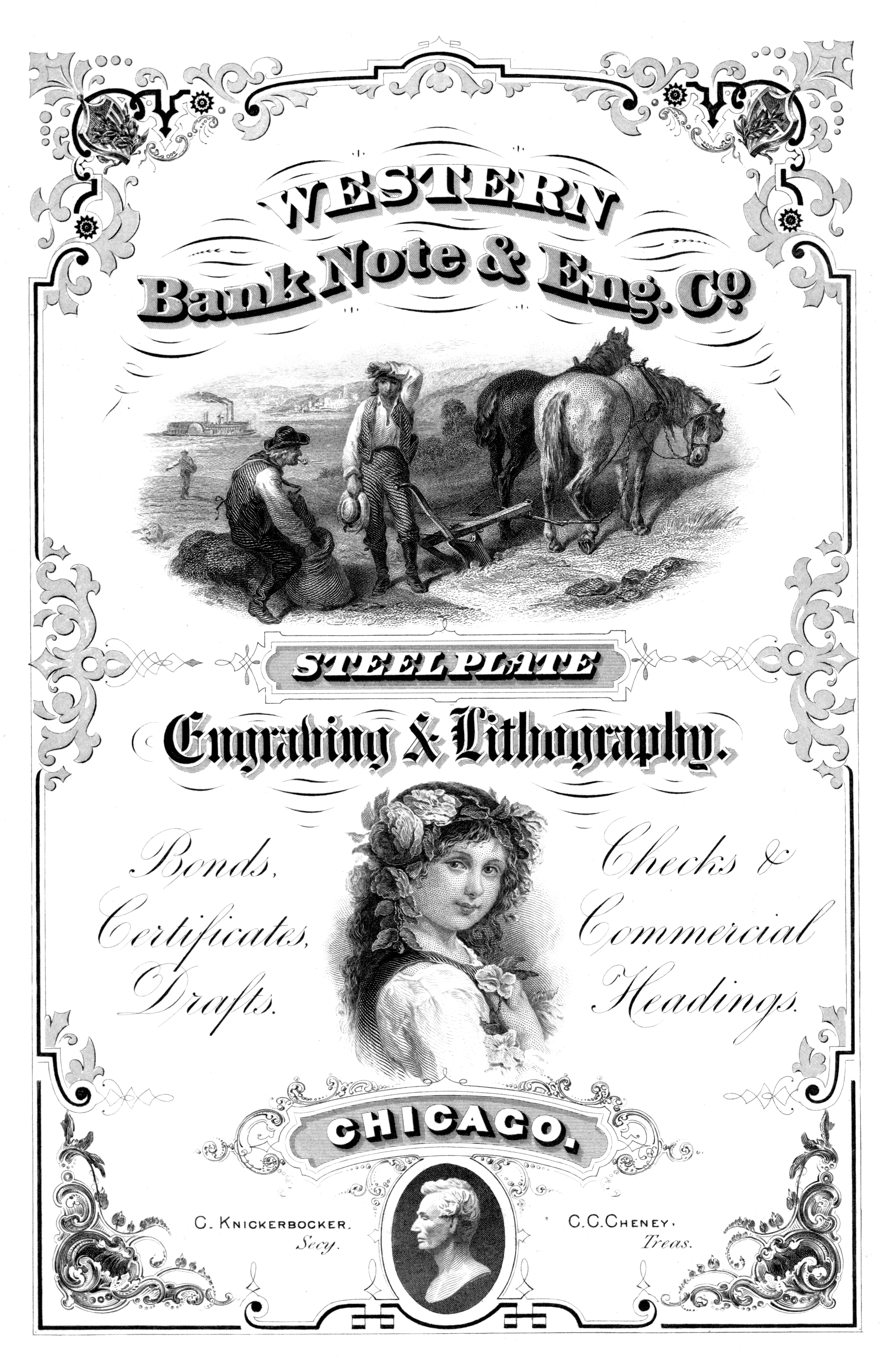 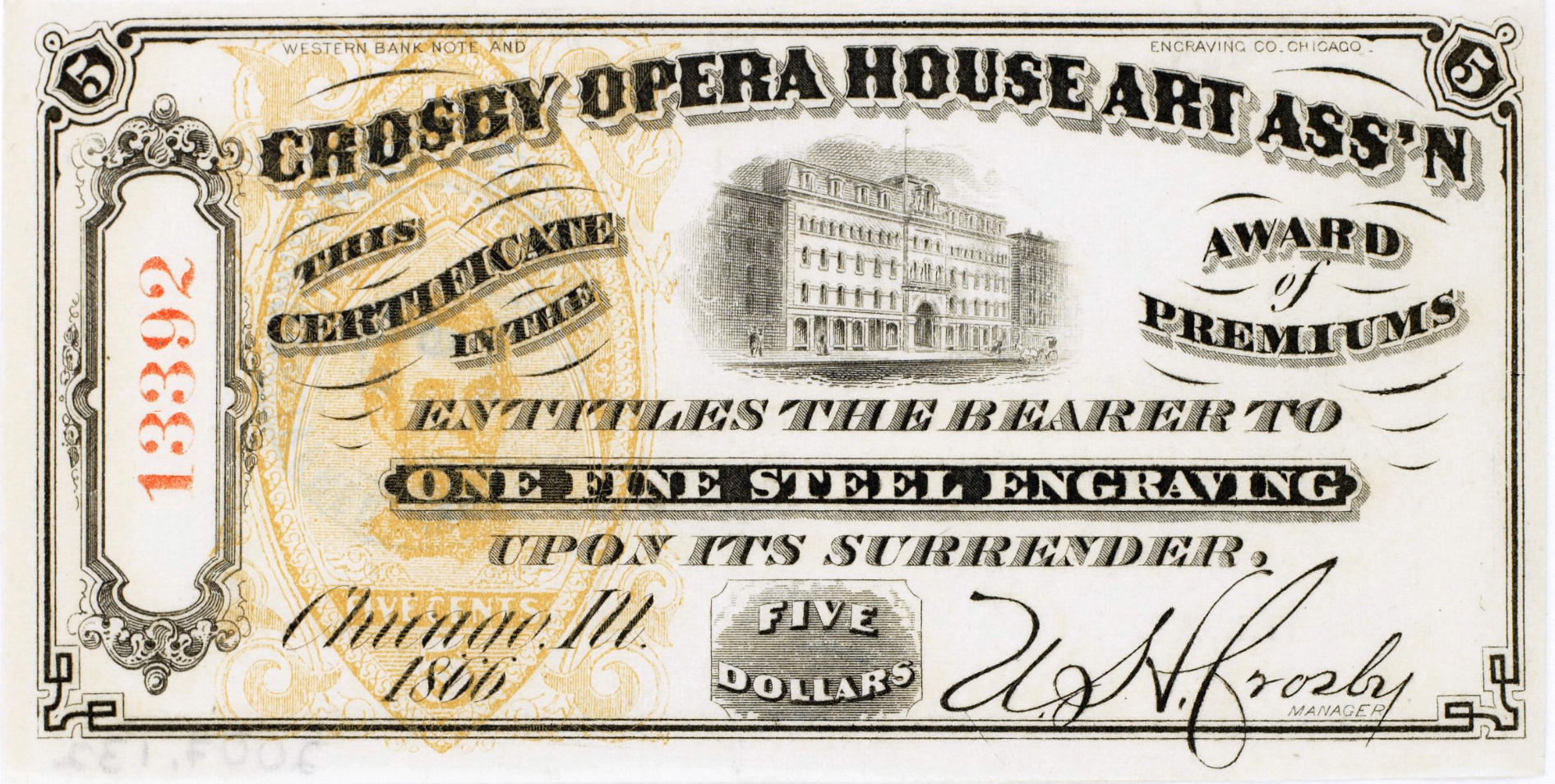 Ticket for the Crosby Opera-House Art Auction, that took place on January 21, 1867.
Engraved by the Western Bank Note Company. 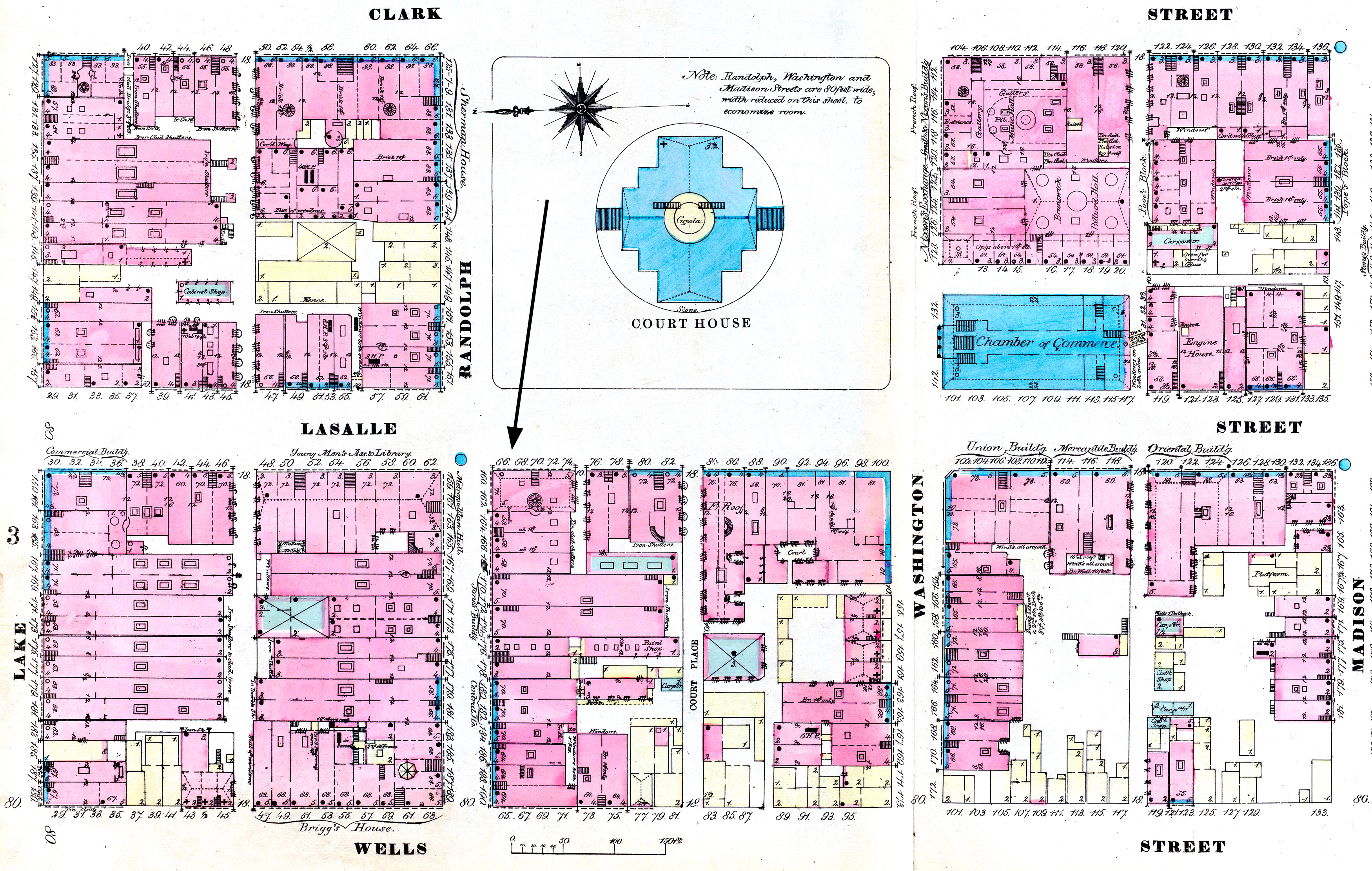