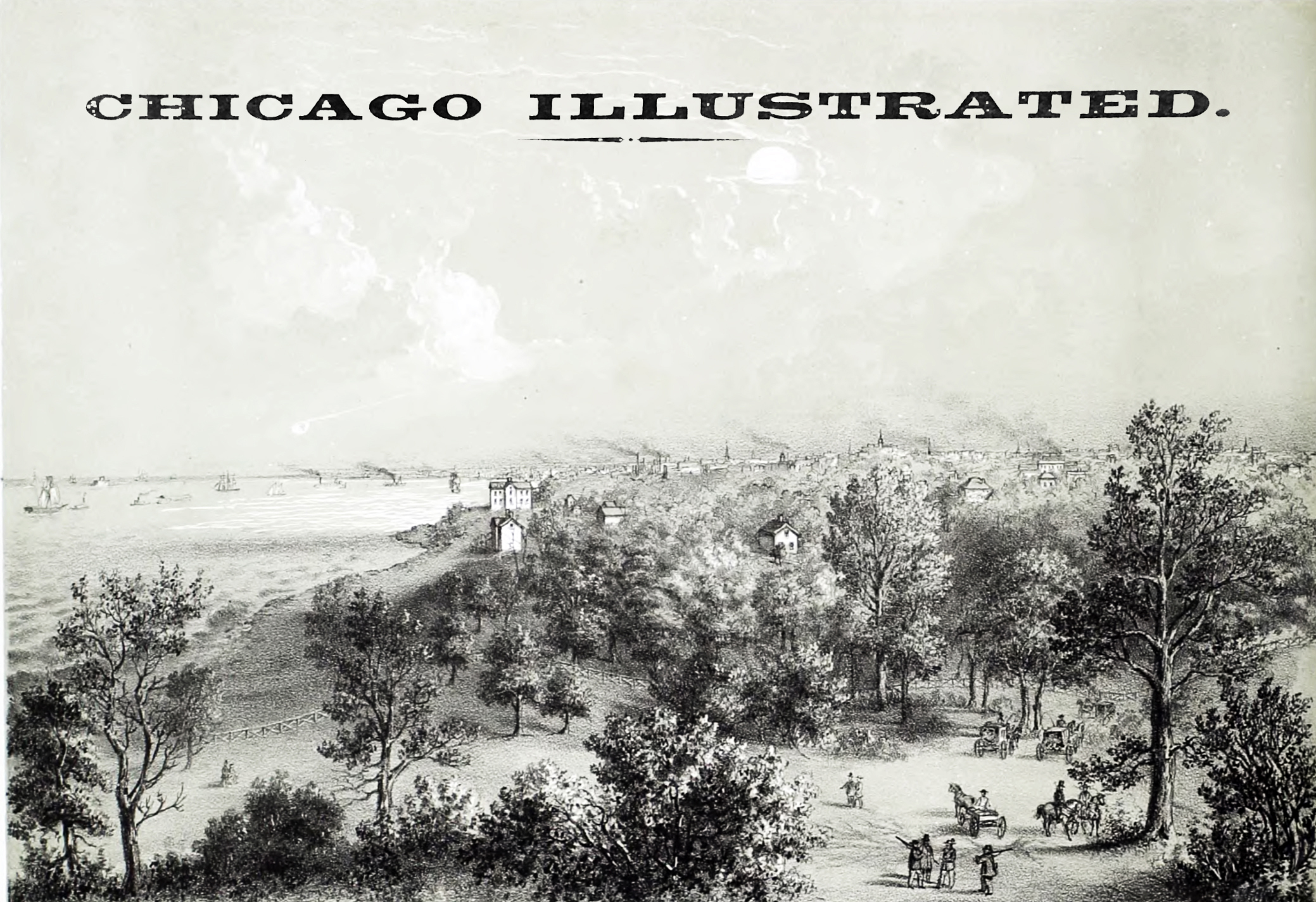 AS our readers have seen, our illustrations have hitherto been confined to views of Chicago within the more thickly settled portions of the city. In order to to the full accomplishment of the purpose and plan, it is deemed necessary to give, from time to time, views of the surroundings of the city, and special points in the neighborhood—localities which, while they are, perhaps, not properly parts of Chicago, are yet the outspringings, as it were, of her growth, and consequent upon her development.

A city never consists of itself alone. It has, in various ways, nerves stretching out, which, in their ramification, betray the existence of the common centre, and which, as much as the centre itself, illustrate the main point of attraction.

As one of these outgrowths, we give in our present number a very beautiful picture of the immediate surroundings of Lake View, and the lake and shore of the city in the distance. Og our suburbs, especially along the north and south, we have great reason to be proud. The south stretches away to Hyde Park; while the north, with its undulations and bluffs, furnishes as far away as Milwaukee, elegant sites for villas. The picture we give in our present number shows the scene as it appears from the top of the Lake View House, about four and a half miles north of Clark street bridge. The point from which we look is itself the centre of a group of elegant suburban improvements, chief among which are, perhaps, the very elaborately ornamented grounds of S. H. Kerfoot, Esq. This place, with its very solidly constructed carriage drives, its artificial ponds, rustic bridges, and fine green houses, is said to be the most artistically arranged place west of New York city. It extends from the lake shore to the main road. This country seat is styled “Dawn.” Near this is also the palatial residence of James B. Waller, Esq., formerly of Kentucky, very extensively and handsomely improved. Mr. Waller calls his place “Buena Vista.” Immediately on the lake shore is the beautiful villa of the Rev. F. W. Ewing, surrounded by grounds very finely decorated. This spot is appropriately named “Rose Heath.” “Woodland” is the residence of our well-known citizen, Doctor Dyer. It is situated, as its name indicates, immediately at the extremity of the grove which adjoins the limits of the city on the north. This place is very complete in all its appointments and surroundings.

The residence of Albert Sturges, Esq., of the banking firm of Messrs. Solomon Sturges’ Sons, adjoins that of Doctor Dyer. This beautiful home, deserving of a name in every way indicative of culture, no doubt has its title, but we failed to learn it. The newly finished dwelling of W. C. Goudy, Esq., completely embowered in the same grove with the two last named, is specially deserving of mention. Immediately at the limits of the city we have “Norwood,” the residence of Hon. Ebenezer Peck. Very rarely do we find more elegance and finish than this place shows. It is surrounded by fine native oaks, interspersed with other deciduous and evergreen trees.

Our space fails us, or we would particularize farther the beauties of this suburban settlement. The horse cars, starting from the corner of Lake and State streets, carry passengers away to the extreme end of, and past, all these points, to Graceland Cemetery, that beautiful city of the dead, in which are found some of the most elaborately finished resting places of the loved ones gone.

Saunders’ floral establishment, (a large grapery to be erected at once) cottages, villas, and improvements of various kinds, greet the eye as we ride along, and make Lake View a very elegant and desirable place of residence.

It will be perceived that the harbor, the shipping, the lighthouse at its entrance, the water-works, and the whole east or lake-side view of the city, are in full sight from the shore north. This beach is to be improved with a drive of one hundred feet in width, of which fifty feet vin the middle are to be given to the drive-way, and twenty-five in width at each side for trees. This drive, when completed, will be one of the most elegant in the world. A charter for this improvement was obtained at the last session of the Legislature. There is also a very liberal charter, appointing commissioners for the location of a park of six hundred and fifty acres in the town of Lake View, to which this drive is to lead., The plan and designs of this park promise one second only to the New York Central.