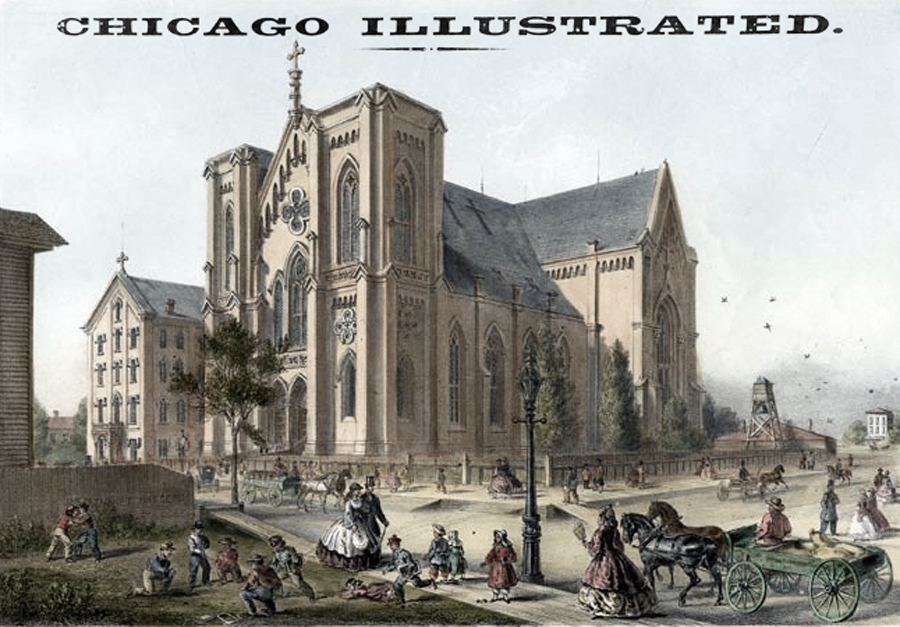 On Twelfth Street, between Blue Island avenue and May street, in the West Division, is located the “Church of the Holy Family,” which is under the pastoral charge of reverend fathers who are members of the “Society of Jesus.” It has the largest congregation of any church in Chicago. The building is eighty-five feet front, and two hundred and six feet deep;—in the transept it is one hundred and twenty-five feet wide. The grand auditorium occupies the whole interior of the building, and is sixty-one feet high. Under this is a basement, handsomely fitted up, and contains a chapel for the use of the various sodalities attached to the church, and for the special instruction of candidates for first communion and confirmation.

The architecture is very Gothic, and the building presents a massive and imposing appearance. It is built of Illinois cut stone. Dillenberg and Zucker were the architects of the building, and John Van Osdell of the interior. The interior is very fine. The proportions of the building was so large that there is a fine field for the display of ornament and good taste. The walls and pillars are of a French-gray tint. The church is cruciform in shape, having a nave, two aisles, and a trumpet. At either end of the transept are two grand painted windows. The windows, which are all of stained glass, in the main body of the church, in the transept, and around the altar, produce an effect that must be seen to be appreciated.

The vaulted roof is supported by massive columns, which, however objectionable they may be as obstructions to the grand view, are none the less appropriate as part of the general style of the building. At the north end is the grand altar, and on either side are the altars of Mary and Joseph.

The sanctuary is larger and more convenient that that of any other church in this city, admitting, on the occasion of the grand festivals of the church, large numbers of prelates and assistants, without in any way obstructing the view of the grand ceremonies of the altar.

The site was purchased and the building commenced in August, 1857, and the church was solemnly dedicated in August, 1860. Six of the Roman Catholic bishops of the country were present, and participated in the grand services on that occasion. In 1865, the church was furnished with a new altar, built by Anthony Bucher, of Chicago, and on the 15th of October, 1865, this altar was dedicated with grand ceremonies to its sacred uses. The extraordinary beauty, the immense size, and the elaborate design of the altar, would if fully described, fill a respectable volume. Like the other interior furnishing of this church, this magnificent altar should be seen; no mere words will convey a true idea of its splendor.

The building immediately west of the church was erected in 1862, as a residence for the clergymen and brothers of the Order. In 1864, Father Damen built, a few blocks east of the church, a school for the boys. The building is very large, is finished and furnished in the most approved style, and has twelve hundred boys attending it. The teachers are, of course, members of the Order. A school for the girls of the congregation is at the Convent. a few blocks west. The congregation is, as we have said, the largest, by many thousands, in Chicago.

Belonging to the church are several lay societies, each counting its members by the thousand. The principal of these are—the Sodality for Males, Sodality for Young Ladies, and St. Ann’s Sodality for Married Ladies; there is also an acolytical and literary society of young men.

The Reverend A. Damen is the Hercules who has in a few years wrought all this work. To his energy, his ability, his sanctity, his perseverance, and his great practical intelligence is due not only the erection of this magnificent edifice, but the great spiritual success which has crowned the labors of the society. With him, and all actively engaged in the arduous labors of the parish, are Reverend Father Di Blieck, Reverend D. Niederkorn, Reverend Andrew O’Neill, Reverend Michael Lawler, Reverend C. F. Smarius, Reverend Florentine Boudreaux and Reverend James Van Goch. Four of these gentlemen are constantly engaged in giving missions throughout the United States.

The massive work of the church was done by Reid and Sherwin, and the carpenter’s work by M. Donahue. The description of the building is not given herein as fully as it would have been, because on the first of May the towers and whole front are to be taken down, and the church extended thirty feet, and some other alterations will be made at the same time. It will then, in its new proportions, be a really splendid structure.