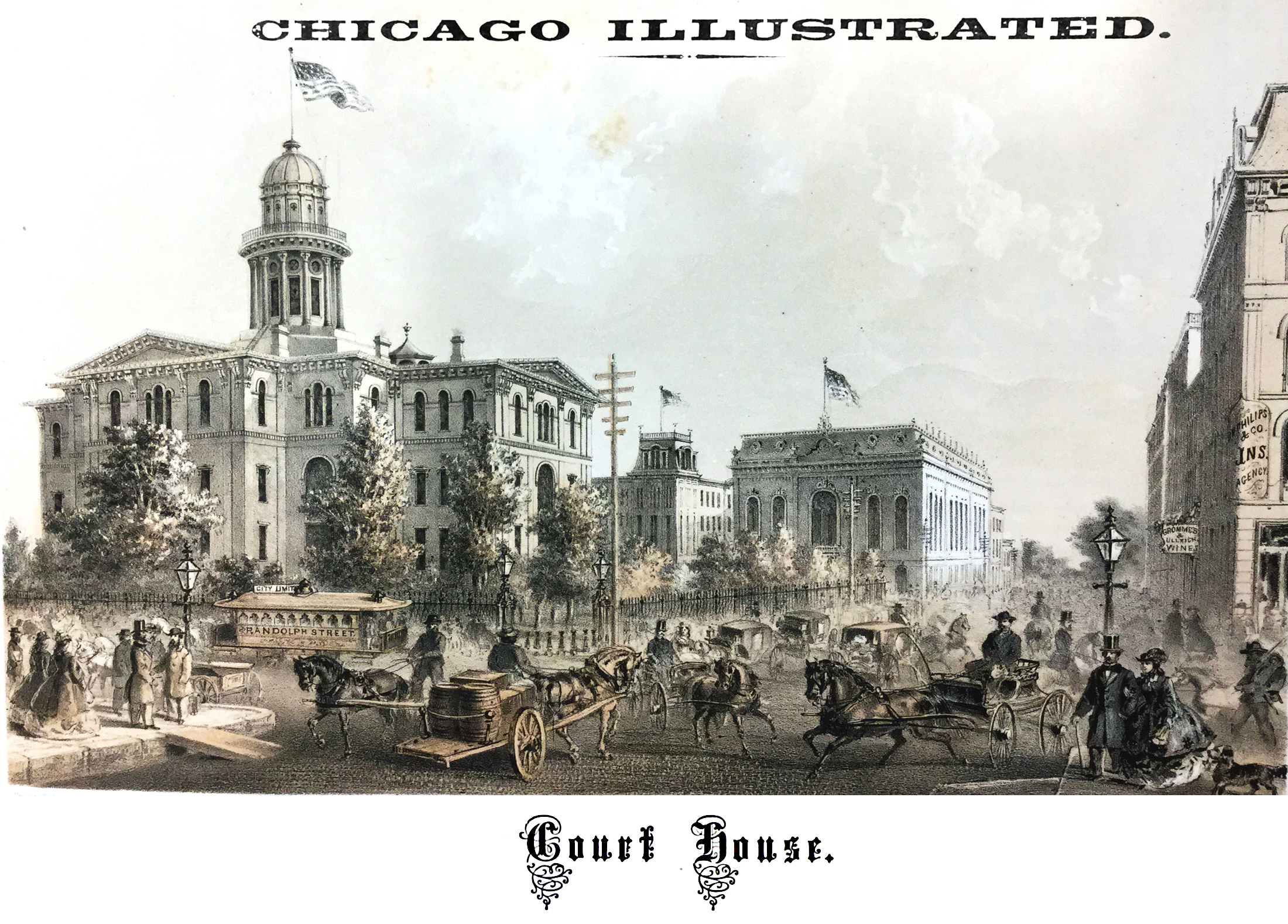 Our view of the Court House is taken from the north-west corner of La Salle and Randolph streets, and unfortunately for the picture, from a point where a tree completely obscures the steps and entrance.

The style of the building is plain Italian, and the material is gray limestone, from Lockport, New York. At that time Chicago had not become fully informed that a better and handsomer stone was to be found in inexhaustible quantities at her own door.

The plan of the building is formed by a central one hundred feet square, having projections north and south, fifteen by sixty feet, and on each side similar projections, thirty-two by sixty feet—making the building from front to rear one hundred and thirty feet, and its breadth from east to west one hundred and sixty-four feet. The original building was completed in 1853, and comprised a basement (above ground) and two other stories. The basement, which was eleven feet high in the clear, was arranged for the county jail, sheriff’s offices, and city lockup, for which purposes, except the last, it is now used. The first story, sixteen feet high, contained a supervisors’ room, county court and clerk’s offices, office of recorder of deeds, debtors’ prison, jail hospital, mayor’s office, etc. The second story, twenty feet high, contained the circuit court room and city council room, each arranged with dome ceiling. The entrances, north and south, were approached by massive flights of stone steps twenty-two feet in length. The principal hall, fourteen feet wide, extends through the building, and is widened near the =centre, to admit two easy flights of stairs leading to the second story. The cost of the building originally was ninety-eight thousand dollars. John M. Van Osdell, Esquire, of Chicago, was the architect and superintendent; Peter Page, mason; John Sollitt, carpenter; F. Letz, iron worker; C. V. Dyer, F. C. Sherman, W. H. Davis, B. W. Everett, Joseph Filkins, and S. Anderson, building committee.

In 1856-7 the city of Chicago resorted to the necessary operation of raising the grades of the streets. The rise in adjoining streets was about five feet, when completed, left the Court House Square about that distance below the level of Randolph street. The filling of the Square put the basement half under ground, and destroyed the proportions of the building. In 1858, to meet these changes, a third story was added to the building, giving an additional height of twenty-five feet. A massive cupola was erected on the centre of the building, and a spiral iron starcase leading from the interior to the observatory balcony, the elevation of which is one hundred and twenty feet from the ground. The story is now occupied by the superior courts, the city council, law library, board of public works, and other city and county officers. The cost of the improvement was about eighty thousand dollars., including the improvements in raising the whole public square. A circular area surrounds the entire building with stone wall and iron railing. The building is admirably adapted for all purposes for which it was intended. The plan admits light from three sides into all the principal rooms, and from two sides in all the other rooms; and, considering that in the construction of the original building, as well as the addition and improvement, the architect was cramped by the most economical notions, he deserves great credit for his work. It is, perhaps, the best arranged and best built public building in the United States, of its size and material, constructed for the same amount of money.

The cut stone for the improvement was furnished by Messrs. Carpenter, of Lockport, New York. the mason work by N. Loberg, of Chicago; the carpenter work by Wilcox and Ballard, of Chicago, and Mr. J. M. Van Osdell was the architect and superintendent. The entire building is heated by steam.

There have been efforts made repeatedly to ornament the grounds around the building with trees and evergreens. Some few trees have struggled against adverse fate, and continue to put forth their verdure. There are four jets’-d eau, one near each angle of the Square. Unsuccessful attempts have been made, during many years, to induse the public to keep off the grass.

Previous to 1840, and for several years later, the courts and public offices of the city were held at various places, in rented apartment. In 1841 the courts were held in the brick building at the south-west corner of Wells and Randolph streets, which since then has been improved, and is now the Metropolitan Hotel. Subsequently, the county felt justified in building a Court House on the north-east corner of the Square, and a jail at the north-west corner; but those soon proved inadequate, and in time will have to give way, perhaps, to a marble edifice, covering the entire Square. The building is the property of Cook county.